The Blessed Sacrament of the Snack-Lunch: Eating f...

The Blessed Sacrament of the Snack-Lunch: Eating for the Modern DePaul Student 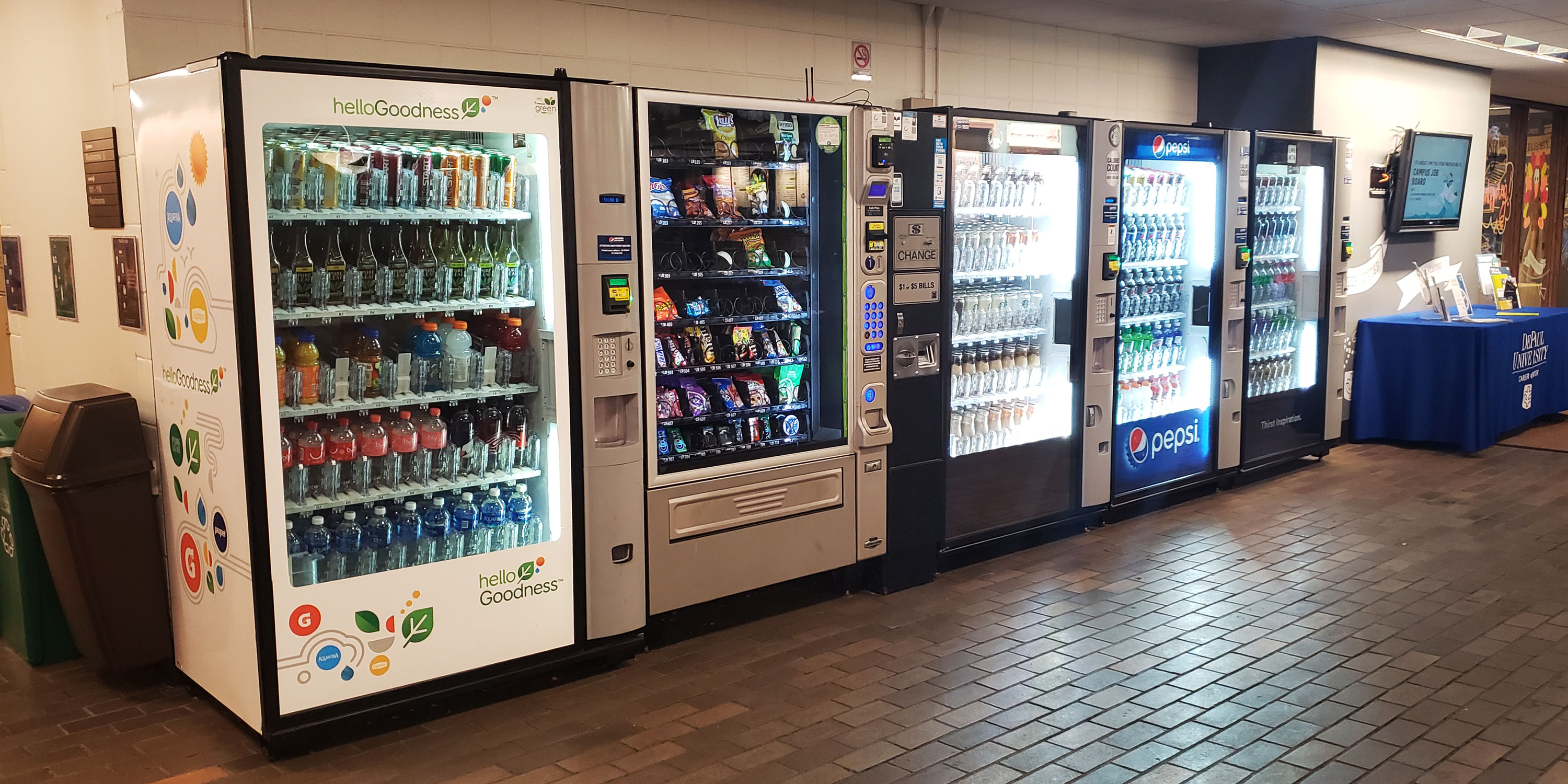 Imagine this: You are a DePaul student faced with a foreboding commute to the Loop campus, a stack of readings you have yet to complete (but are required to) and a pocketbook as empty as your stomach. You find yourself in a position of having to choose between class responsibilities and nourishment — or do you?

The answer to this dilemma: the snack-lunch.

Also referred to as a “scrunch,” this concept was first introduced to 14 East at our picnic in September by a pair of concerned practitioners unsure of how to implement it on campus.

Elena Neal, an avid snack-luncher at DePaul, expressed similar concerns. “I don’t really have time to eat meals,” Neal said. “I only have an hour, and a lot of that is taken up by traveling on the ‘L’ because it’s between the two campuses.”

Never fear, concerned students, your guide to snack-lunching is here.

Part One: The Snack-Lunch Acquisition

Number One: The 7-Eleven at the corner of State and Jackson

The sound of classical music pulled straight from the pages of Mozart plays and mixes with the scents of exhaust and tobacco wafting over the breeze as you view a mural of color. Lines of green, orange and white smartly trace the windows as you arrive at the Shangri-La of snack-lunch supplies: the 7-Eleven at the corner of Jackson and State.

Sure, there are campus options to choose from. You could have very easily taken the elevator up to the snack shop in the redundantly named DePaul Center Student Center, but why would you do that?

Offering prices at a fifth of the amount DePaul’s “convenience stores” try to charge, the Jackson and State 7-Eleven proves to be a practical, smart and superior option for the first entry on the list of recommended places to acquire a snack-lunch. Plus, the Student Center’s option doesn’t play Beethoven out its storefront.

Its design and business model are designed for the snack-lunch purpose. A rural road trip stop displaced in an urban metropolis, the Jackson and State 7-Eleven (along with all other 7-Elevens in the Loop) is streamlined to appeal to the hungry individual on the go. Rows of snack cakes and questionable hotdogs complement the all-too affordable Big Gulps and chips of every flavor and texture.

Passing through from the John T. Richardson Library to the Schmidt Academic Center (SAC) under the protective canopy of the cloister bounding St. Vincent’s circle, one is destined to run into the “Mag Mile” of campus snack-lunch sources.

Inclusive of not one, not two, but four different vending machines, the cloister provides a well-maintained and extensive stretch of options. Looking for a freshly made option? Drop by Farmer’s Fridge, and the cloister has you covered. Looking for quick and cheap options? The cloister again comes in clutch with its generic vending options. Thirsty? Again, the cloister. It is thus guaranteed to satisfy every budget, desire and diet.

Looking for a deal? The vending machines in the lobby of the SAC provide Starbucks Frappuccinos at 25 cents less than other competing campus machines, such as those in the Lincoln Park Student Center. In addition to saving you money, though not as extensive as the cloister’s, this locale offers unique and rare campus vending machine options, such as bags of shortbread cookies dotted with raspberry “jam.”

It is as if by fate that the last on our list of suggested snack-lunch sources is in 14 East magazine’s namesake.

Though its list of offerings is not nearly as extensive as the others on this list, the 8th floor of 14 East Jackson is included for its convenience and accessibility within the Loop. If you’re in need of a quick and accessible source of snack-lunch nourishment, look no further than this hidden vending machine.

Part Two: Where to Snack-Lunch

Number One: The Pod of Benches Outside the West Entrance to the SAC

It is a garden within a campus within a city. It is a breath of fresh air untouched by the perils of smog. It is the tree-lined solace of quietude that every bird in Chicago hopes to roost in and DePaul’s crowning argument for its illusion of a traditional college campus amid skyscrapers.

In winter, it may be a frozen tundra that even Satan himself avoids, but there is no superior utopia for snack-lunching than here when weather permits. Though there are multiple pods of benches around the Quad and though the picnic tables outside St. Vincent’s Circle may be tempting, the pod of benches outside the west entrance to the SAC offer a host of amenities that the alternatives do not.

In less than five steps, one can access recycling and trash receptacles. When the nerves of finals week call for the partaking of nicotine, an ashtray is within an arm’s reach.

If one orients themselves to face away from the main thoroughfare stretch of sidewalk running through the Quad, they can gaze up at the luscious green hills gracing the sides of the SAC or listen to the songs of birds and the hum of bees. You might even see a dog or two.

In any case (except winter), it is a true snack-lunch paradise.

Number Two: The Seats Along the Hallways on the 8th floor of 14 East Jackson

Do not let the 8th floor elevator lobby fool you into becoming its prey with its hoards of ideally arranged offerings of seating. Sure, they are comfortable and do their job, but they put you on display. Every time the elevator stops and the doors open, the people on it stare. Trying not to think about class or anyone in it until it starts? You can’t do that when they’re staring from afar.

Turn the corner and take a seat in the many comfortable options available in the hallways. Secluded valleys of privacy, the hallways provide a much more desirable haven for the snack-luncher. Enjoy reading the flyers found on the many bulletin boards that line the hallway’s walls for free entertainment.

If you found yourself here, you meant to find yourself here. Cordoned off from the rest of the university sits the study area on the 5th floor of the Levan Center.

Sit down at a table and face the window. Across from you, you will see the glory of DePaul’s Arts and Letters Hall. The windows of Arts and Letters Hall, aligning perfectly with those of the study area, provide the opportunity of a lifetime for people watchers of all types and ages. Watch your fellow classmates hurrying to class and laugh. While they stress over theses and dissertations, you are enjoying God’s greatest gift to humankind: the blessed sacrament of the snack-lunch. 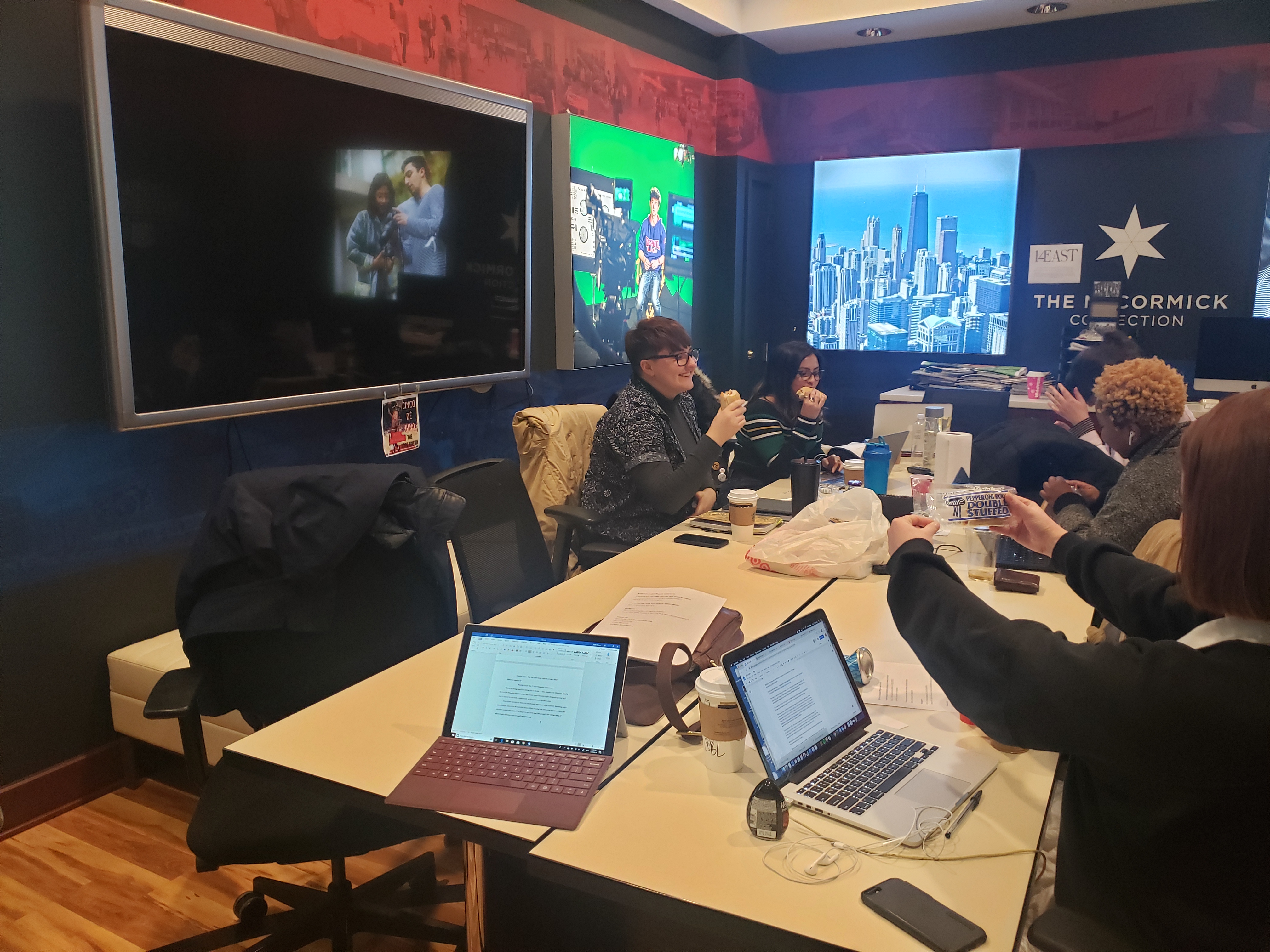 We’re not being biased by adding this to the list — okay, maybe a bit. However, drop by the 14 East Magazine newsroom at 6 pm on any given Thursday night during the quarter, and you’re sure to be met with a snack-lunch social experience like none other.

Join fellow reporters in their own snack-lunch endeavors while excitedly discussing news opportunities and pitches to reach the masses. Have a seat at our table or on one of our luxurious pleather couches and chairs. You may even get lucky and find yourself met with an array of snack-lunch offerings, such as candy at Halloween.

However, the most important and concluding guide to be made about snack-lunching is that it is a purely individualistic science. These suggestions, though they are prime, are not the only ways one may enjoy the beauty of snack-lunching.

“I will sometimes eat them on the ‘L’ if I’m really hungry,” Neal said regarding location. “Or, once I get to Lincoln Park in between my classes, I’ll finally sit down and eat.

In terms of acquiring snack lunches: “I’ll sometimes get them from the Barnes and Noble Café,” Neal said. “Sometimes I’ll get them from ETC. in the Student Center, and sometimes, I’ll just run into Walgreens.

With these points in mind, the snack-lunch journey awaits all DePaul students. To all, I wish a very happy eating!