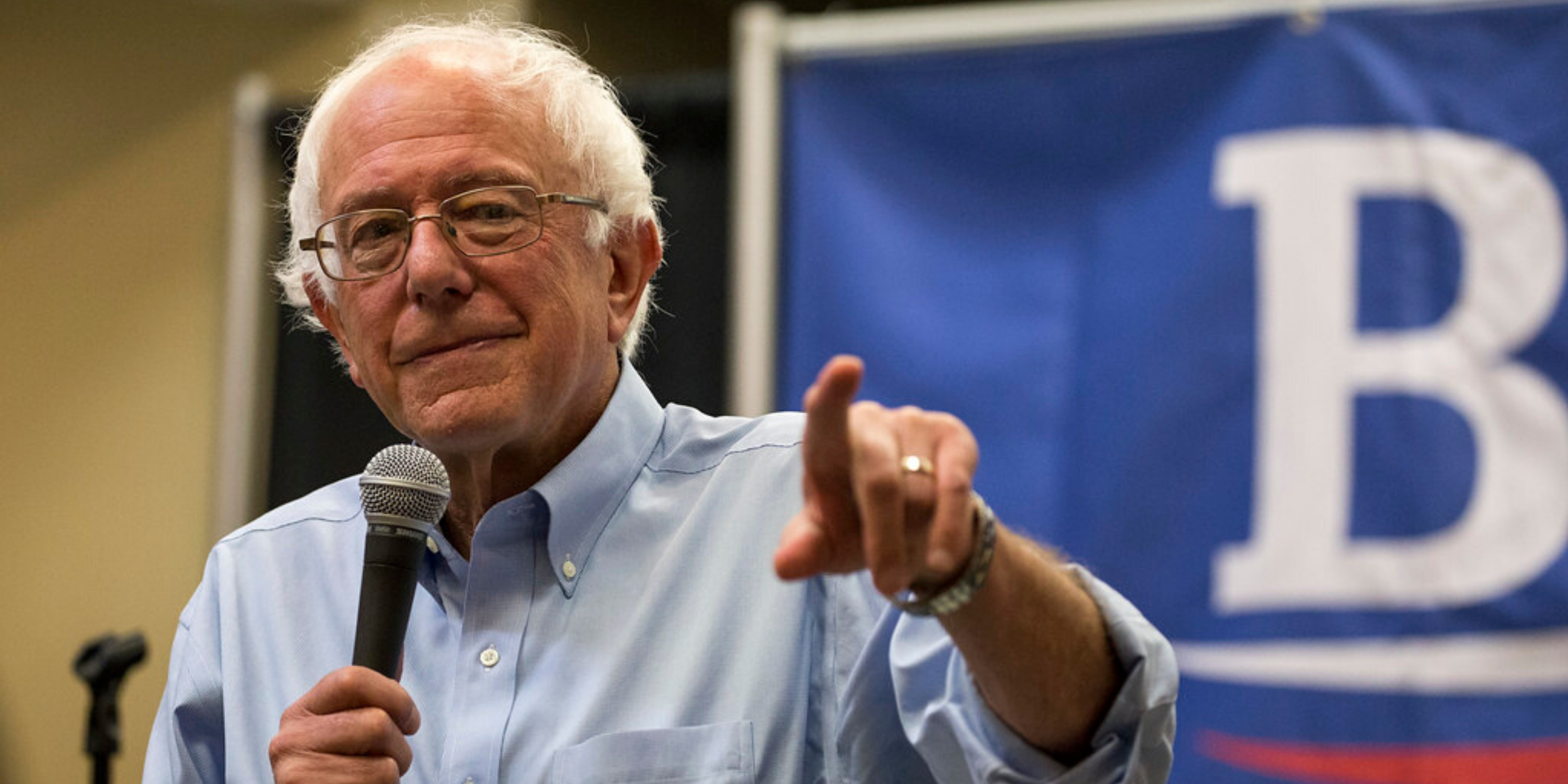 The result: trending #1 nationwide and #15 worldwide on Twitter, campaign donations and, for some, backlash from both ends of the political spectrum.

DePaul student Danaka Katovich started the movement with a tweet January 12 that said she wanted to start a group chat for hot girls supporting Sanders.

I wanna start a hot girls for Bernie group chat or something.

That night, Katovich and fellow DePaul student Hadiya Afzal decided on the hashtag #hotgirlsforbernie. Alongside Noor A., whose last name been abbreviated due to retaliation for her activism, who runs the Hot Girls For Bernie Twitter account, they made a group chat and added friends, other DePaul students, Twitter mutuals with some sort of political platform and anyone else who wanted to join. Bernie Sanders himself was added and is currently in the chat (he has never said a word nor is it likely that he frequents his Twitter DMs).

From there, the online campaign was born.

The idea that anyone could be a hot girl was core to the movement. Katovich and Noor both have made that clear since the beginning.

“It started with an inclusive mentality that anyone can be a girl and anyone can be hot,” said movement participant Jaya Sundaresh, a freelance reporter and hot girl. “That’s not really something men like to say.”

hot girls for bernie transcends gender and looks. we all are hot girls.

“Hot girl” is an inclusive umbrella term open to anyone who wants it – a nod to Megan Thee Stallion’s “Hot Girl Summer,” a song-made-meme widely circulated last summer.

Being a Hot Girl is about being unapologetically YOU, having fun, being confident,living YOUR truth , being the life of the party etc

“It’s about feeling yourself,” Sundaresh said, “And feeling brave enough to feel yourself in a world that doesn’t want us to exist as women who are self-actualized.”

The support, however, was no joke.

“Hot Girls for Bernie was meant to be a funny message that would attract attention to important issues/policies,” Katovich said in a direct message on Twitter.

After posting, Noor watched the hashtag go from #26 nationally at around noon, to #1 in national and political trends by the end of the day.

“My phone was overheating,” she said, because of the number of notifications she received.

Hasan said she, Katovich and Afzal all had varying agreed-upon goals – Noor’s was to get traction for Sanders and increase cash flow. Based on her own calculations, gathered from reports by those participating and tracking donations, she estimates they raised at least $10,000. One Hot Girl for Bernie, Kaylee Edgar, raised $6,000 in one day to donate to Sanders’ campaign.

Hot girls for Bernie did such a funny number on my DMs. My favorites are the ones that mention feet specifically. Oh also the one that just says "fat" pic.twitter.com/kwTdYvpWiM

All three aimed to pick apart the “Bernie Bro” narrative tied to Sanders’ male supporters in the 2016 election – the trope of the generally angry, usually white “woke” guys on the left who are, as legend has it, remarkably sexist.

“We wanted to get rid of the notion that the only [Sanders] supporters are white cis[gender] men,” Noor said.

Hateful and extreme individuals definitely exist on the left, Noor said, as they do in every political movement, but they aren’t indicative of his entire base or Sanders himself.

Sanders has 9 million Twitter followers. The supporters that do feed into this “Bernie Bro”-ism are loud and active online – making it easy for outsiders to lump his entire support as a fairly indistinguishable, adjacent to the alt-right.

“It’s his online ‘Bernie Bros’ and their relentless attacks on lots of his competitors, particularly the women,” Hillary Clinton said in an interview with The Hollywood Reporter. “And I really hope people are paying attention to that because it should be worrisome that he has permitted this culture — not only permitted, [he] seems to really be very much supporting it.”

Hot Girls for Bernie counters this. A movement that confronts the perpetuation of “Bernie Bros,” instead aims to be more inclusive, more accepting and a more accurate representation of his diverse backing.

As of November, Sanders has raised the most money from women since the announcement of his presidential campaign – $17.1 million, making up about 40 percent of his funds.

He has raised the most money from Latinx voters as well, generating three times as much as Obama did in 2008, according to The New York Times.

Hasan feels that this inaccurate portrayal of his base is partly rooted in how left his agenda is, or is perceived to be. Sanders is a white cisgender man, but his following is not entirely.

“The critique of Bernie is over-amplified and hyper-focused because of how progressive he is,” Noor said, referencing his portrayal by political opponents from the spectrum of Sen. Elizabeth Warren to President Donald Trump and major media outlets.

What part of #HotGirlsForBernie was not clear to you people ?? https://t.co/ZsM3k2zGVg

In the realm of Twitter responses, many who participated in #hotgirlsforbernie were met with hostility from the left and right.

“I posted my selfies,” Sundaresh said, “and then people started getting really f—king mean.”

#hotgirlsforbernie I'm hot and I'm for universal healthcare, erasing student debt, a Green New Deal, and racial and economic justice for all!!!! pic.twitter.com/jwG3SZCkZc

Sundaresh said the response was expected but intense, receiving negative comments, mostly about her appearance, from conservative bloggers and trolls. She cited finding some peace of mind in how the backlash she faced may have shifted the focus from the other girls in the hashtag.

Despite, Sundaresh notes that the Hot Girls for Bernie group chat is a supportive environment.

“I feel like when women talk to each other, there’s a lot of power there,” she said. “Whenever we saw a woman getting dogpiled, we stepped up to support them. We commiserated in the chat when we were getting dogpiled. It was just a really good, wholesome experience to talk to so many cool women.”

“The majority of the United States is not on Twitter. . .the average American is not up to date on Hot Girls for Bernie,” Noor said, “but there are an increasing amount of young people online.”

The youth vote played a critical role in the 2018 midterm election, doubled since the 2014 midterms, according to a study by Tisch College’s National Study of Learning, Voting and Engagement. Social media is proven to encourage young people’s political action.

“But most people who use them are not polarized.”

You might have to be online to understand the nuances of the hot girl meme paired with the perpetuity of sexist Twitter replies, but offline Sanders has gathered expansive and diverse support leading up to the pivotal Iowa caucuses.

Next up is Hot Boys for Bernie set for January 31. Hasan said the group is also considering using the traction to organize canvassing groups. And, with an understanding that despite the inclusiveness, the term “girl” is gendered, are looking into a Hot Folx for Bernie, for nonbinary Sanders suppporters.

“It’s not a revolutionary movement,” Noor said, “But it’s a good way to interact and engage…in a way that’s trendy.”

Hot girls in YOUR area want Bernie for president!

Editors Note: Since publication, Noor’s last name has been been abbreviated due to retaliation for her activism