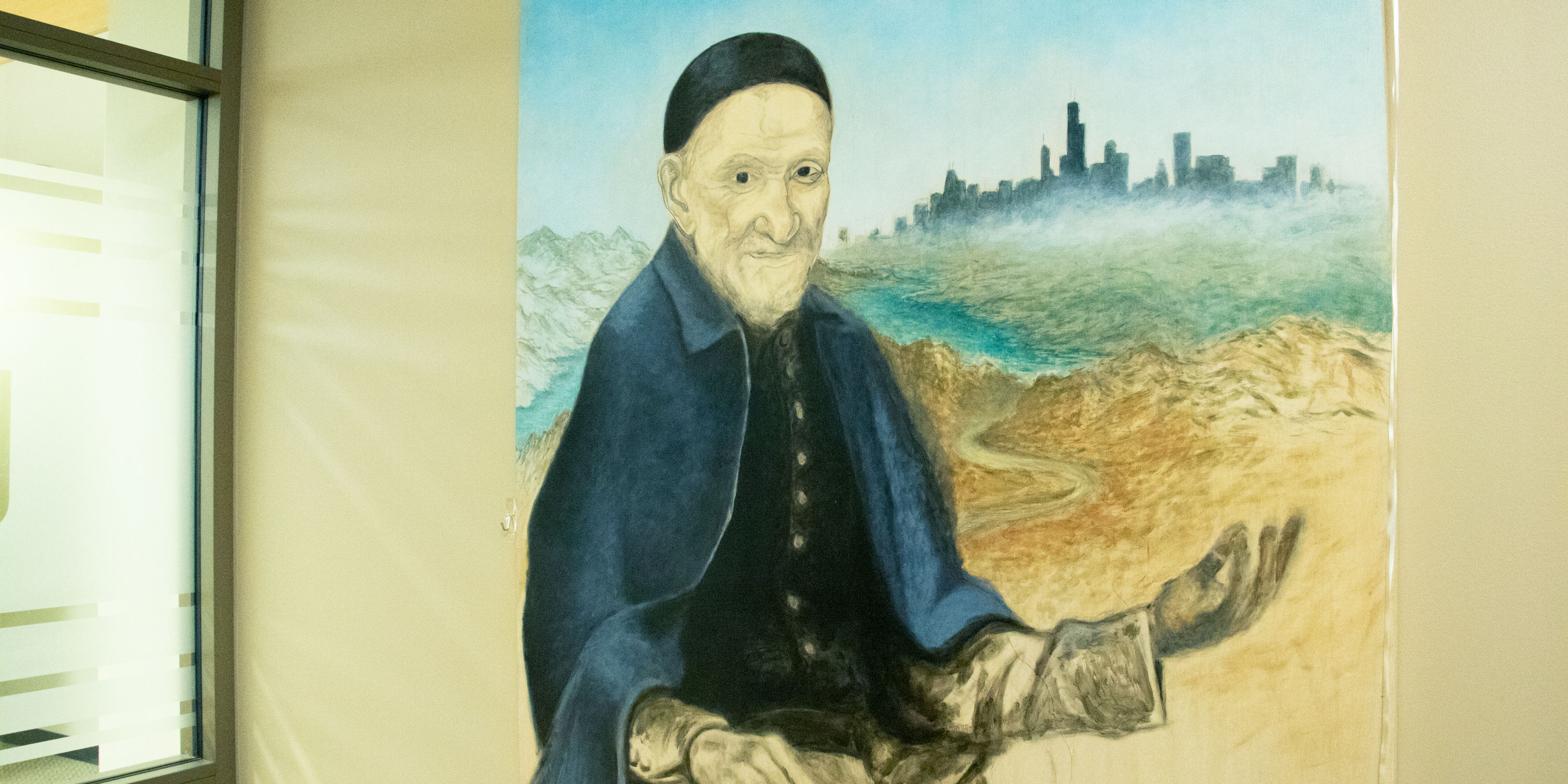 Art on campus with St. Vincent de Paul in it inspired DePaul alumnus Cole Andersen to create a painting for his senior capstone project last year, and now his work is being displayed on campus.

DePaul unveiled Andersen’s painting on the third floor of the DePaul Student Center, which was followed by a presentation of Andersen talking about his work of art at a small reception at the Catholic Campus Ministry office on the Lincoln Park campus in January.

Andersen graduated in 2019 with a double major in art and graphic design with a minor in illustration. The painting he created of St. Vincent was created for his senior capstone course, ART 393: Senior Project Studio.

“When I was painting it in the studio, Brother Mark Elder was painting as well and was the first person to react to it,” Andersen said. “Father Edward Udovic approached me to have it on display in the university.”

Brother Mark Elder had the chance to see Andersen work on the painting day by day. Andersen mentioned how Elder thought it was rare for someone to choose to talk about the Vincentian mission for a capstone project.

“Knowing the background of the project, it was interesting to see how he was going to develop things,”  Elder said. “He is trying to depict in so many ways the founder in my community, so I had a natural interest right there.”

As a freshman in the Discover Chicago program, Andersen took a course dealing with the Vincentian values, which opened the doors for him in appreciating the Vincentian mission. Andersen thought this opportunity would be thrilling and a chance to leave DePaul on a high note.

The painting shows St. Vincent sitting on a rock with a view of the Chicago skyline in the distance. A river and a mountain range are also found in the distance away from the skyline. St. Vincent is shown extending his left hand, which is seen as a welcoming gesture.

Andersen drew inspiration from the “We are DePaul 2” mural by Elder. This mural is located on the west side of McCabe Hall overlooking the Fullerton CTA station. The mural is made up of DePaul faculty and students’ faces, which can be seen when up close to the mural on Wish Field.

The sculpture “The Way of Wisdom: Saint Vincent de Paul and Students,” also known as St. Vincent’s Circle, by Sister Margaret Beaudette was also an inspiration for Andersen. This statue is located across the Quad of DePaul University adjacent to the Schmitt Academic Center and the John T. Richardson Library.

The sculpture is supposed to promote diversity and inclusion when a child and a man are seen listening to the wisdom of St. Vincent. This promotes diversity since St. Vincent includes everyone no matter what age or gender they are.

“The pose that Vincent takes from the bronze statue [of St. Vincent’s Circle] was a major inspiration for the actual pose he takes in the layout of this painting I created,” Andersen said.

Andersen spent a lot of time thinking how the painting will look mathematically as well as trying to link it to that pose of St. Vincent’s left hand gesturing to others to come and join him that he saw in St. Vincent’s circle as clearly as possible. 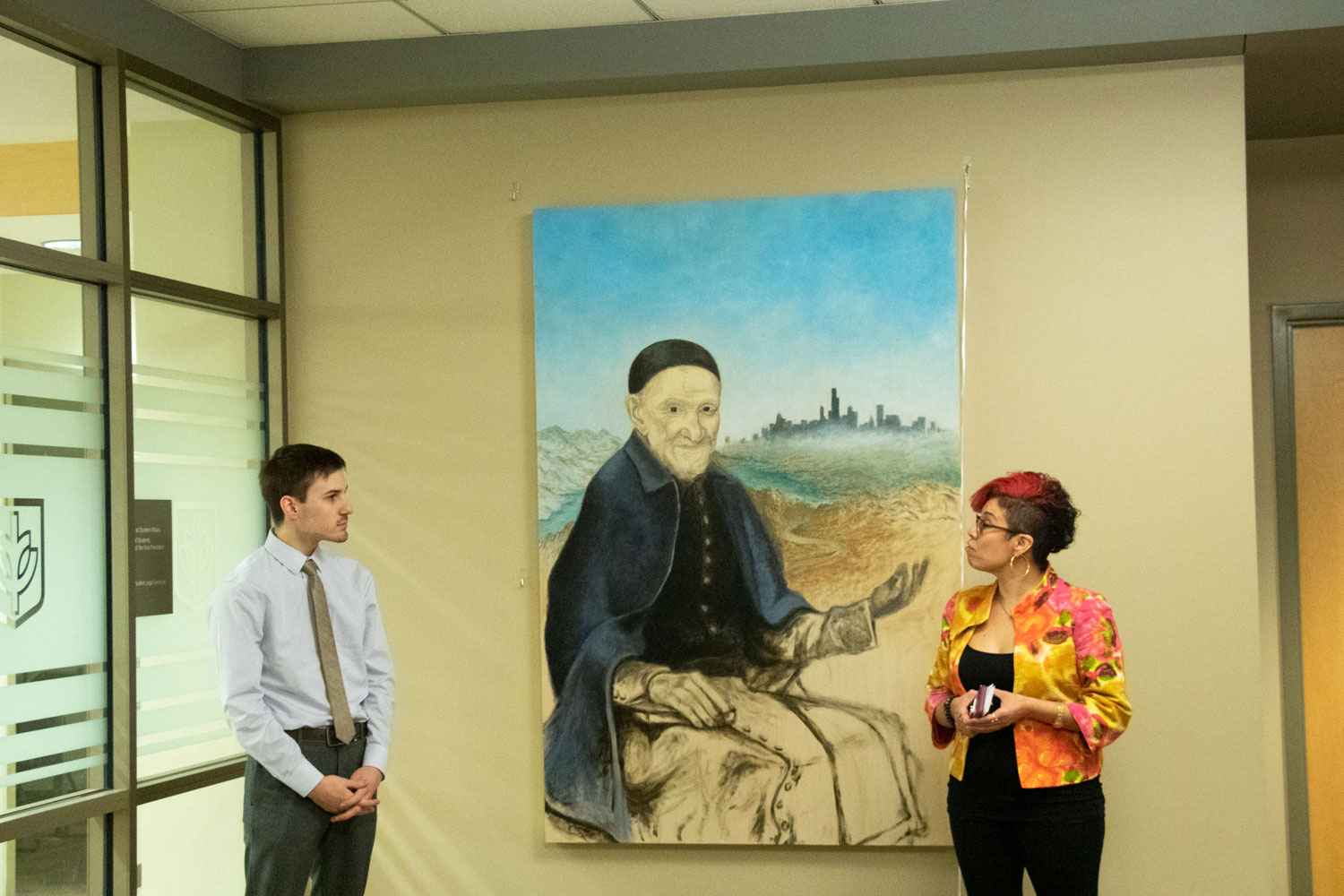 An important aspect of the painting for Andersen was linking St. Vincent’s values to a more present-day setting.

“I wanted to have the Chicago skyline linked with him,” Andersen said. “That was a major thing I wanted to do with a prominent figure.”

The link from the past and modern setting is important for Andersen going into this piece since he has a lot of memories walking to this area of the campus.

“I thought it was a calming setting to be around this bronze statue between the library and the Schmitt Academic Center,” Andersen said.

The painting also includes a nature background consisting of mountains and rivers.

“I wanted to link the nature setting in the almost nature setting that is in the courtyard as well here because in that setting it is just the figures and more of a foliage setting,” Andersen said.

Andersen did not want to make the background of the painting the entire city landscape. “That is where the mountainous river and display comes to play. From there it was some little touch ups and late hours at the studio,” Andersen said.

In terms of the installation of the painting, Andersen was in charge of picking a location on campus for his painting to be featured.

As a result, he chose the third floor of the Student Center because he said he had a lot of memories in that building. The painting is hung next to the Dean of Students Office.

Freshman Catalina Torres Reyes attended the ceremony with some friends and thought that the location of the painting in the student center was ideal.

“I think the third floor can always use, like, a little more sprucing up,” Reyes said. “Because not as many students, like, go up to the third floor because it is more for offices.”

Reyes heard about this event through her mother, Georgianna E. Torres Reyes, the associate vice president for student engagement of the Division of Mission and Ministry, who was in charge of planning this event.

According to Elder, there is a lot of artwork generated by the administration, and student artwork is more of a statement on how students can generate their own place in the university.

“When student artwork is seen in more public places, it becomes more visible as to the various values that are espoused by the university,” Elder said.

In terms of Andersen’s presentation of the logistical planning of the painting, Reyes enjoyed hearing about it.

“The fact that he used a lot of geometric shapes and things and a lot of math before he actually created the painting was really interesting to me and it made it even more realistic because he got all the proportions correct,” Reyes said.

In terms of making a difference to the DePaul community, Andersen is satisfied with what he left behind.

“The overall impact was positive for my journey. It was a cool point to leave the course behind with something,” Andersen said.

Reyes also noted how the painting of St. Vincent would help grow the awareness of the Vincentian mission.

“I think that it’s always good to have more images or depictions of St. Vincent and one that includes Chicago is even more important just because DePaul is very much a university within the city,” Reyes said.  “Because it is in the city, it is very important to the students and staff.”