How Much Does it Cost to Commute to DePaul via Met...

Beyond the Free Ride: What the..

How Much Does it Cost to Commute to DePaul via Metra?

DePaul University claims that 90 percent of its students live off-campus or are commuters. As an urban dual-location campus with a large population, DePaul only has on-campus housing space for roughly one third of the undergraduate student body, leaving most students to navigate to classes on their own.

By providing students who fit certain criteria (typically at least 12 credit hours for undergrad and eight for graduate students) with an unlimited CTA U-Pass and including the cost into tuition, DePaul budgets for the reality that students are frequently in transit around the city. But what about the students who live out of the ‘L’s reach?

Students who ride Metra to and from campuses pay the fares out of their own pockets. Often, it only gets them part of the way there. Below, you can explore the experiences of DePaul students who use Metra to get to campus at various times and costs.

David Wildman, a senior studying sports communication, transferred to DePaul from Illinois State after his fourth year there.

“I liked the ability to be flexible with my schedule and work while I went to school,” Wildman said. “And just really liked the idea of going to school in the city.”

Now in his second quarter at DePaul, Wildman lives and works full time in Deerfield. He originally tried to drive to campus last quarter, but quickly found himself frustrated.

Wildman is only on campus one day a week this quarter for a night class. His routine looks like this: he leaves his job around 4 p.m., walks 10 minutes to the Deerfield Metra station, and boards a 4:35 p.m. train on the Milwaukee District North Line. After riding for 45 to 50 minutes, he gets off at Union Station and walks to 14 E. Jackson Blvd., the Daley Building.

“I mean, I always, I always try and keep the number of days I’m commuting as low as possible,” he said. “It’s a little more difficult, as you probably know, when you get a little further into your major, and you kind of have to be on campus more.”

Even though his commute is long and late at night, Wildman said his time isn’t wasted.

“That’s the other really big benefit is being able to sit down and you know, connect to my phone hotspot and get homework done or get readings for class done or, you know, just sort of organize my schedule or even take a nap.” 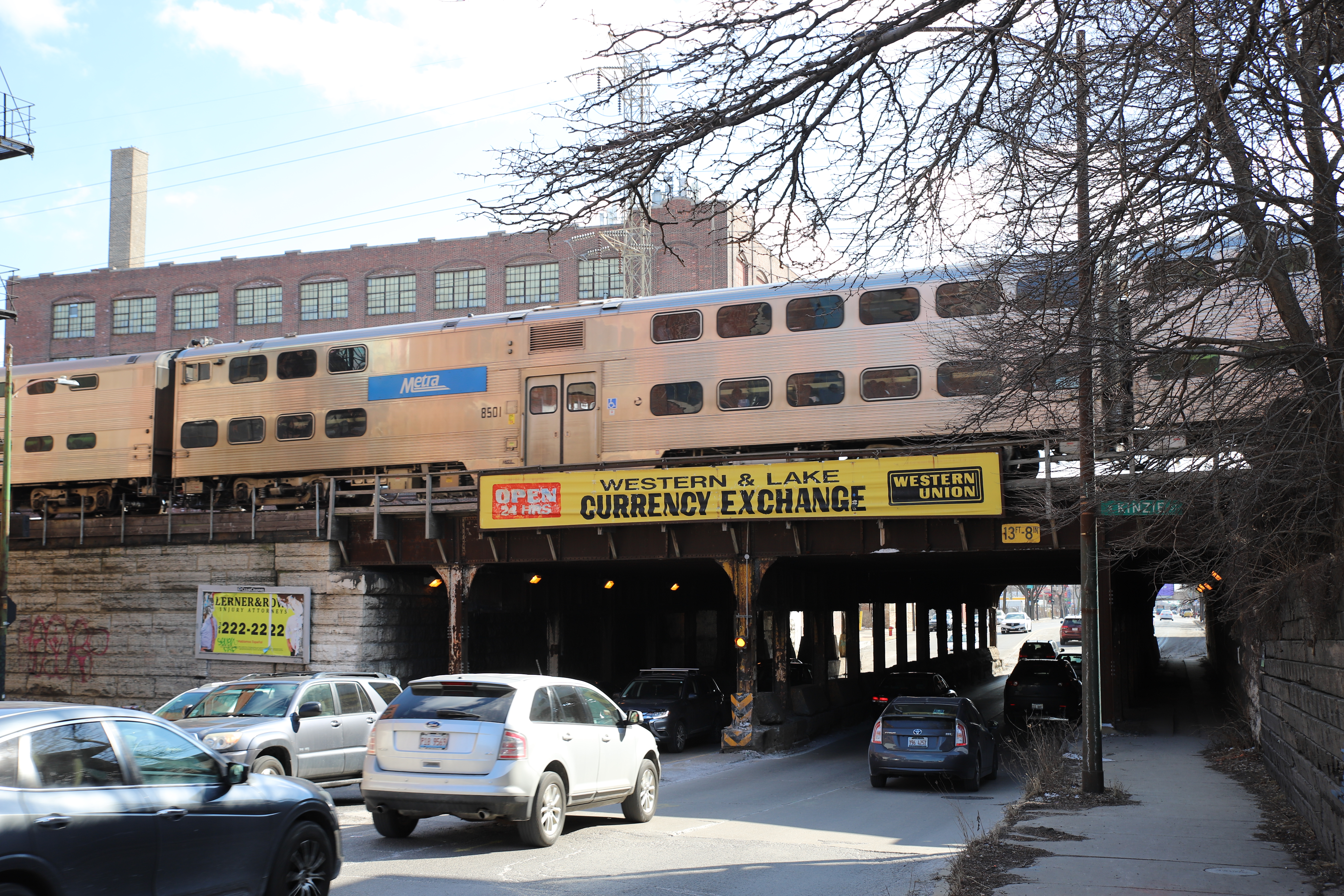 When looking at colleges, Jonathan Aguilar picked DePaul because his older sister attended  and he could save money by living in his hometown of Villa Park. He feels his long and costly commute denied him certain on-campus opportunities during his freshman and sophomore years.

“I wasn’t as social as I could have been, and I think that was really affected by just the fact that I didn’t live on campus,” Aguilar said.

Now as a senior studying photojournalism, he pays for a $181 monthly pass in order to come to campus as many times as he needs to, which is usually five or six times a week for classes and extracurriculars. Though he used to stack classes to avoid making the commute several times each week, he, like Wildman, has found that difficult to do later on in his program.

“I kind of like bit the bullet and I’m just like, well, I’m already paying $181, might as well get involved and do other things outside of classes,” Aguilar said.

Aguilar walks 10 minutes to get to the Villa Park station, then rides on the Union Pacific West train for 40 minutes to an hour to get to Ogilvie Transportation Center. He then either walks to DePaul’s Loop campus or takes the Brown Line to Lincoln Park. He doesn’t have a set time he goes home.

Paying for a monthly pass for nine months costs Aguilar $1,682.

“I think we should have something,” Aguilar said. “I’m not saying that we need to like pay it all in our tuition like we do with our Ventra pass because not everybody would use the Metra.”

He thinks that because Metra commuters don’t have an unlimited pass like the U-Pass, they are less likely to spend time on campus and become involved.

“Because of the cost of the monthly and just the commute itself, it definitely influences a lot of students to not get as involved as they should just because they don’t like the commute and they pay so much money.” 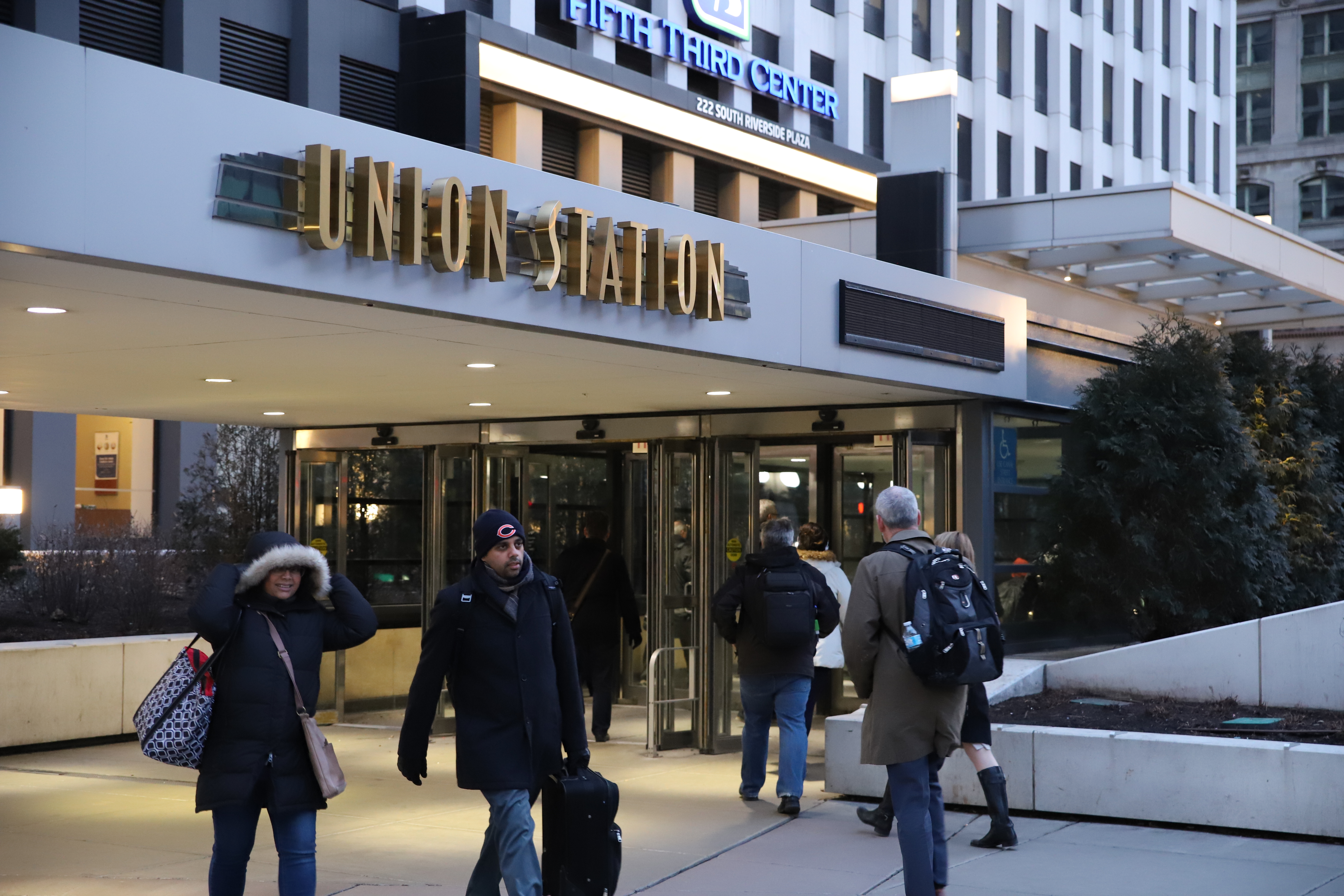 People walk in and out of Union Station. Cam Rodriguez, 14 East.

When Watfae Zayed saw that no one was running for the senator for commuter students on the Student Government Association’s ballot last spring, she created a write-in campaign with her friends on social media. She’d spent her freshman year taking rush hour Metra trains from Mokena to get to class on time.

“My life is kinda on a train,” Zayed said. “Like if I want to catch a train that’ll get me home in 30 minutes, I know, okay, you gotta get out of class and run to the ‘L’ and make sure the Brown Line doesn’t get delayed. Because if the Brown Line gets delayed, like your whole day is gone. And then if you get on the Metra and the Metra gets delayed, like that’s even worse.”

Zayed, now a sophomore, took over the SGA position in the fall and coordinates events for commuters. She is only using Metra about once a week this quarter because her night classes allow her to drive, which she enjoys because it’s more independent.

When she takes the train, she drives to the Mokena station, pays $1.25 for parking and $6.75 in fares, rides the Rock Island District train for 45 minutes to an hour and grabs a Brown Line from LaSalle station to get to Lincoln Park for her neuroscience classes.

As the senator for commuters, Zayed has noticed that commuters want to leave campus once classes are over for the day and tend to form friend groups, including the one she’s in.

“I find it’s easier to make plans with people that have the same like, ‘We have an hour and a half to get home’ type of thing,” Zayed said. “And like they plan their schedules around the same way like with their classes and stuff like that, so it’s easier to be friends with them.”

She said that commuter students don’t expect to be given Metra passes like Ventras, but they would like some sort of discount. She doesn’t think Metra would make money off a college discount.

“I know it’s just not cost efficient for them versus like giving it to high schoolers who take the Metra, like, twice a year,” Zayed said.

Currently, students are working on a Metra discount for DePaul students. Senior Marcus Towns, the SGA senator for community and government relations, has spent the past two quarters generating forward motion on Metra discounts with nine other SGA members.

As the chairman for the Illinois Board of Higher Education Student Advisory Committee, where he works with representatives from other schools to advocate for college students, Towns knows that students at universities across the city are facing this issue. However, he thinks DePaul should pursue an individual solution because Metra is unlikely to agree to a broad student discount.

“They’re on record saying they don’t want to offer any sort of discount,” Towns said. “They want to rely on the Illinois legislature to then subsidize the discount, which is an extremely large package on top of the already capital bill that was just passed recently.”

Instead of trying to get the legislature to adjust the state budget, Towns thinks that getting DePaul to reallocate funding within its own budget or reach out to alumni is a more viable way to offset Metra costs.

He also said that a discount unique to DePaul could draw in new students and retain current commuters.

“It’s finding an incentive for people to want what makes [DePaul] different. ‘Why should I come to your school?’” Towns said, “And I think this way for us to lead.”

To bring this plan to DePaul, Towns and SGA members are initiating different strategies.

SGA is currently working on adding a referendum to the spring elections ballot in order to gauge student support and have something tangible to bring to administration. Town thinks that the administration hasn’t directly heard complaints, so it’s not a current concern.

Before the ballot is released for students to vote on in spring, Towns’s group of SGA members are trying to get a resolution passed within the SGA body to signify their commitment to this issue. Jeff Bethke of the Strategic Resource Allocation Committee is visiting SGA’s general body meeting later this month to determine if funds in the budget can be relocated and what percentage level of a discount DePaul could afford.

Towns and Zayed, who will be taking over leadership of the initiative when Towns graduates, are seeking student voices on DePaul’s potential options for Metra discounts and welcome people to come to SGA’s general body meetings on Thursdays at 6 p.m. in room 308 in Arts & Letters.

In the meantime, DePaul students will continue to travel hours through multiple stops to reach DePaul’s campus, all on their own dime.