How El: The Chicago Transit Ad..

How Much Does it Cost to Commu..

‘We’re All Going Somewhere’: Davon Clark on Poetry and Loving the Bus 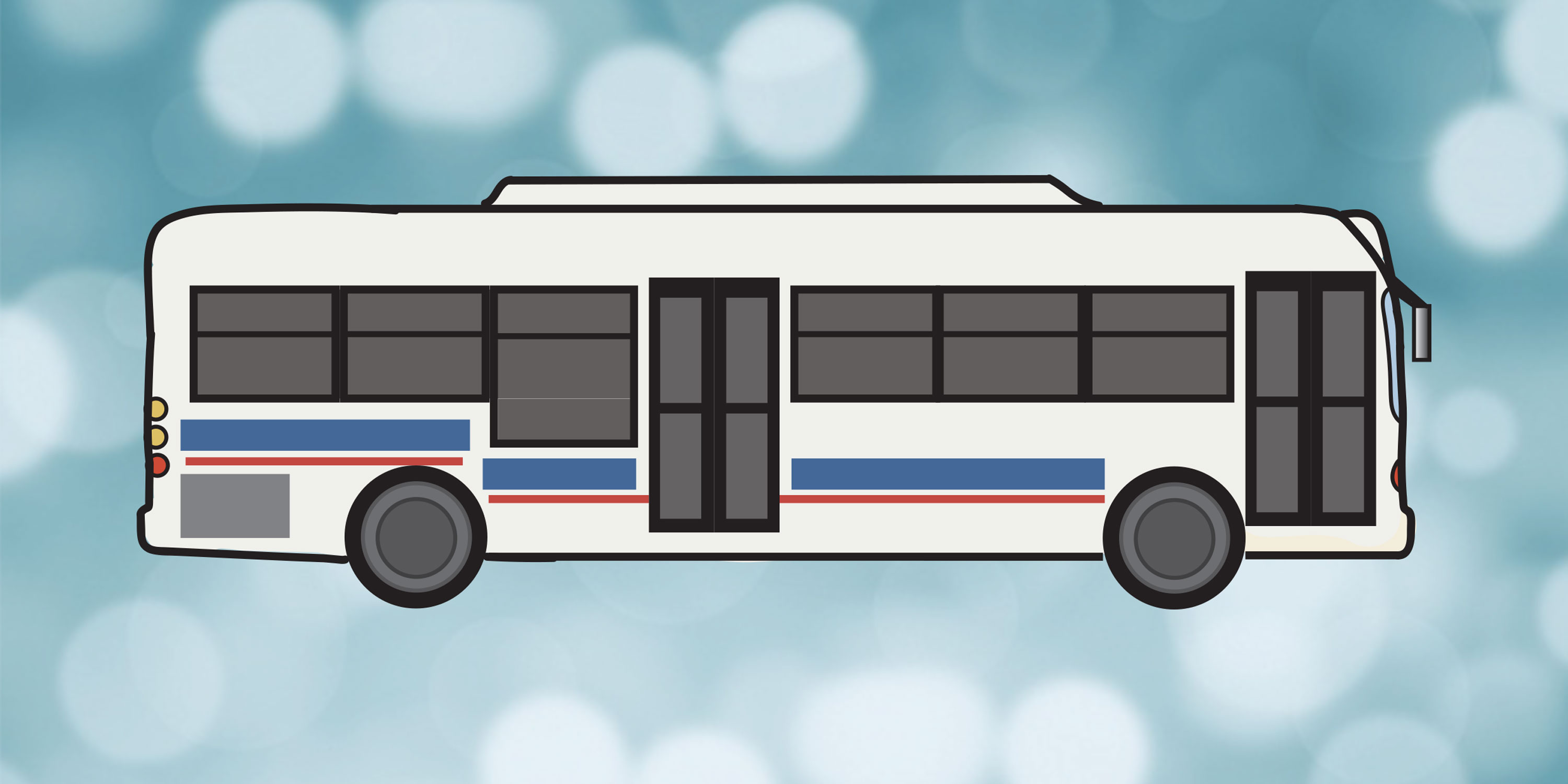 On a crisp, frost-tipped morning, a frantic shuffle through rush hour in the Loop or a dreamy, Sunday afternoon on Lake Shore Drive, you can find me on the bus. It’s my favorite way to travel.

As someone who grew up with the more solitary, involved and –– in my own humble opinion –– stressful experience of driving a car through traffic from point A to B, I cherish these moments on the bus. They’re moments of casual reflection or vivid daydreaming. They’re moments of silent connection with strangers on everyone’s journey to somewhere.

My affinity for the bus, wide-eyed and staring out a window, doesn’t always feel shared. I understand –– missed connections, wait times of 25 minutes and standing at outdoor stops without the luxury of ‘L’ system heat-lamps in Chicago’s winter can be trying.

But when I first read Davon Clark’s poem “Praise to the Bus Ride,” all of those Damn-I-Just-Missed-the-Last-Bus-Moments washed aside and I found myself smiling at the ode to the daily bus commute.

Clark is a photographer, poet and journalist who moved to Chicago from Philadelphia in 2018 as the summer and fall City Bureau Photo Fellow for that year. He’s been writing poems since middle school and got into both photography and journalism in high school.

“I like making pictures of things, both describing them and actually taking them,” he said about the intersections of his work. “I think the concept of a camera is really cool; that you can literally capture the light of a moment. And I try to do the same thing with my poetry and my writing in general. The best writing I’ve read or experienced are things that left an image with me.”

“Praise to the Bus Ride” was inspired partially by Nate Marshall’s “Praise Song.” Clark was reading Marshall’s work when he first moved to Chicago.

“Having read some of the poems in that book before I moved here…I was then very close to those images. Like, they were on my commute,” he said. Re-reading the poem when he moved to Chicago gave Clark’s new surroundings a fresh sense of meaning.

“Praise Song” coupled with his own experiences commuting on public transportation began Clark’s early ideas for “Praise to the Bus Ride.”

“I’m just always writing or working on something when I’m on my commute. It all just kind of came together one day and I thought, ‘I like this,’” he said.

This inspiration extends beyond commuting in Chicago.

“Since I was 10 I’ve been riding the bus. I love it. Like you said, people give it a hard time, but it’s the most beautiful part of my day, at least,” he said. “Not only am I alone and I can think and collect, but there’s other people doing the same and sometimes we’re all overlapping.”

That sense of “overlapping,” — of feeling so intensely in your own world, looking up and realizing that there are a hundred other worlds orbiting around you, all inside of that rush hour 6/Jackson Park Express. That’s the feeling that drew me to the bus commute when I first moved to Chicago.

“Since I got here, I’ve been thinking a lot about how we’re all going somewhere. Not just on the bus, but everyone has this very individual life that is just as high stakes as your own life is,” Clark said. “There’s the same ups and same downs, the same moments and the same insiders and things that are happening that I will never know about, but are constantly happening around me.”

It’s not just the moment of orbiting one another’s thoughts on the bus that feels so powerful and connective, “especially when you’re alone,” Clark said. The questions and possibilities of what happens to someone when they step off the bus unsheath new layers of wonder on the average morning commute.

“It’s so wild to think that there’s so many stops on a bus route, and someone’s not necessarily gonna get off at every single one, but damn near,” he said. “That’s just so many places people are going! Because then, what other buses, what other things generally, are they going on to? It’s a fun part of my day to think about that.”

Clark’s observations and reflections on bus commutes come through in every line of the poem. There’s one stanza in “Praise to the Bus Ride” that particularly struck me the first time I read it:

The ads plastered along the window

That paid for all of this to happen,

Praise be the one way windows,

That will never see you.

To me, as a reader, this line reached a touch outside of the descriptive, image-evoking language throughout other parts of the poem and seemed to grasp at a larger message about transit in Chicago.

“For people who don’t take public transit as a necessity, they don’t really care about people who have to wait at the bus stop or it’s not really in their day to day, moment-to-moment thinking,” He said when I asked him about this line. “And I think about people who are taking public transportation, people who have to, are often these parts of the community that are forgotten. Thinking about all of the buses that have to run on the South Side or people can’t get to work or do all these other different things.”

Clark said he wrote this poem on the J14/Jeffery Jump bus (one of his favorites), thinking about how the bus is “a whole different world. It’s so forgotten and put to the side by everyone it’s passing, which is cool in a way. I like not being at the center of attention and just pass through life while other people pass me,” he said.

“But it kind of sucks sometimes, realizing that the buses are different on the South Side,” he continued. “Or when CTA has a delay but doesn’t post something online or put and posters up at the stops. My whole day is now changed because of that.”

In his time as a City Bureau fellow, Clark also came to understand the pitfalls but also, the honest strides for improvement that CTA and Metra make. He said that CTA programming could be more inclusive of the South and West sides.

“I have a lot more fun going from 95th to 87th than from Roosevelt from Jackson,” he said. He also said that letting folks know about route changes and delays should be viewed as an immediate necessity rather than just a convenience.

And I completely agree. The bus is not just an enjoyable way to travel, but is sustainable and should be accessible to everyone.

“But during my City Bureau cycle, I learned a lot more about what CTA and Ventra are doing to subsidize the cost,” he said. “I think as it being a public commodity I assumed they weren’t doing, but I didn’t realize how much money goes into making it a $2.25 ride.”

The bus –– for all of its stopping and starting, express runs and neighborhood routes, is one of the only places where you have just as much of a chance of running into an old friend as you do learning something new from a stranger. It’s a place where, above all, we witness people at some of their most human moments in public: going to or coming from.

“I love when a spontaneous conversation starts that doesn’t really end, but didn’t really have a beginning, either,” Clark said. “That doesn’t happen for a lot for me in the other spaces I’m in.”

It doesn’t happen in a lot of spaces I’m in, either. Coming to Chicago from a world of highways and SUVs, the bus has been not only a literal vehicle but a vehicle of transition. It’s been a place for me to see and feel the streets, parks, buildings and above all, the people that make this city what it is. And to that, praise be.