What You Need to Know About CO..

DePaul Final Exams to Move Online, Spring Quarter to be Remote in Response to COVID-19 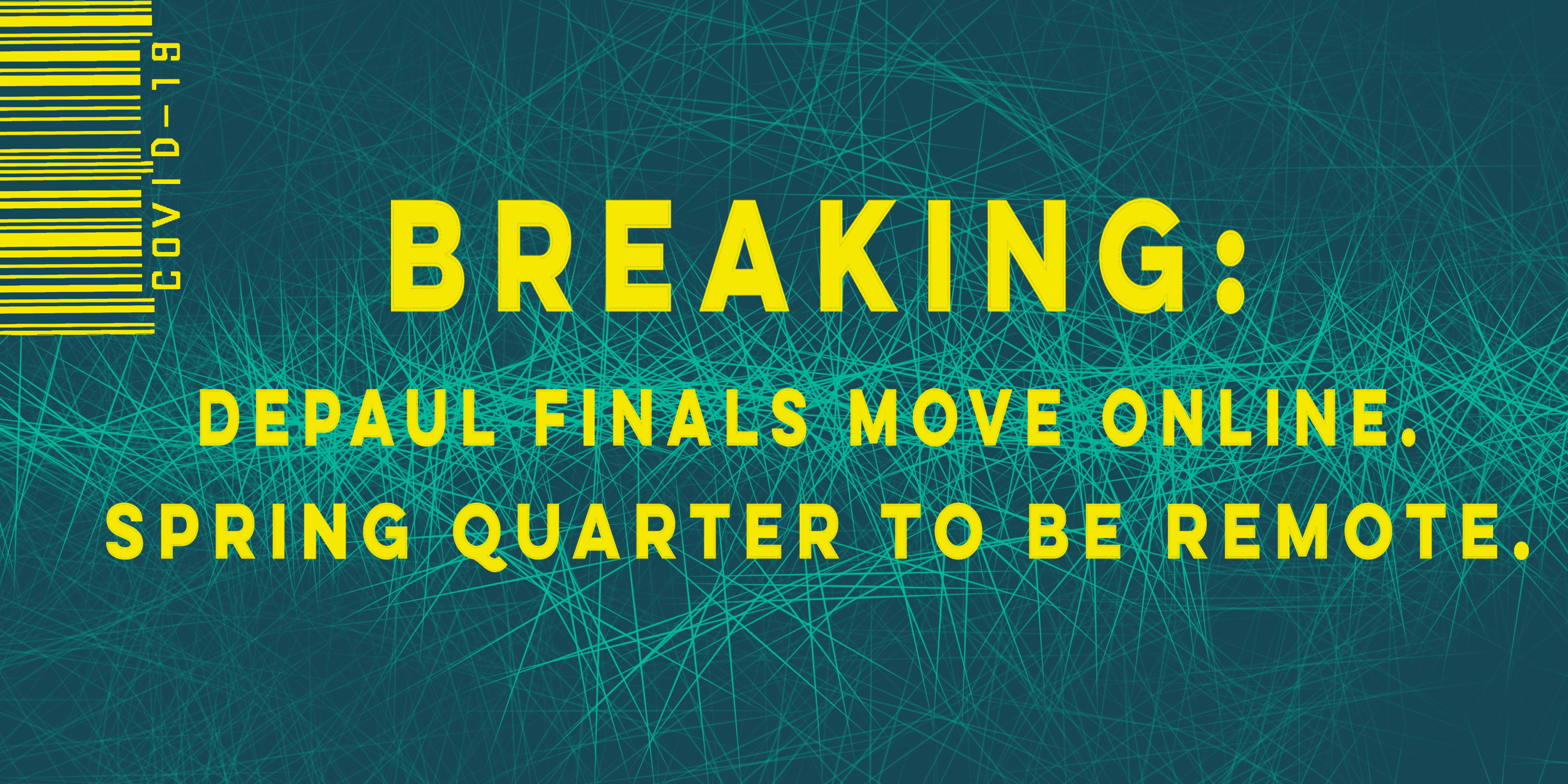 While most coursework moves online, the university — including the libraries and Student Centers — remain open

On Wednesday evening DePaul University joined the growing number of colleges and universities across the country moving courses online in response to the spread of COVID-19, also known as the coronavirus.

In an email to DePaul students, faculty and staff, university President Dr. A. Gabriel Esteban announced significant changes to the remainder of the academic year: All Winter Quarter final exams, which are scheduled to begin on Monday, will occur off campus, and most of Spring Quarter classes will be conducted online. Esteban told students living on campus that they should prepare to move out before Spring Quarter begins.

The announcement came hours after the World Health Organization declared COVID-19 a pandemic, and minutes before President Donald Trump made an address to the nation and suspended travel from Europe to the United States beginning on Friday at midnight for 30 days. Meanwhile, the N.B.A. suspended its season after a Utah Jazz player was confirmed to have the coronavirus.

Not sure what “pandemic” means or how to protect yourself? Here’s what you need to know.

DePaul students — who are in the midst of preparing for final exams — expressed confusion, concern and disappointment on the heels of the university announcement. Freshman Benjamin Jacinto was in John T. Richardson Library in Lincoln Park when he received the email. Tension in the library was palpable –– conversations shifted nervously from final exam panic to virus speculation, amounting to an uproar of clapping and frantic calls to parents as students opened their inboxes.

Jacinto, who is from California, hopes DePaul will be able to make accomodations for him to stay on campus.

“It’s kind of alarming that I may have to pack up and make an emergency move to California. I really don’t want to have to do that,” he said.  “Just because of all the unpredictability in that and all of the chances of something bad happening.”

Jacinto is also concerned about bringing the disease back home. He said his parents are older and his grandmother is currently living in his bedroom.

“I’m really stressed,” said Carlie Jacobsen, a freshman hospitality major currently living in Corcoran Hall. In addition to finals, she’s trying to figure out how to move back home to Atlanta. “I’m seriously so stressed out because this is the worst possible time this could be happening, especially for people who have to move out of the dorms and everything like us, like it’s just really bad. This is not a good time.”

Jacobsen said she has been having a difficult time focusing on homework since receiving the email.

“I cannot focus on finals right now,” Jacobsen said. “I have not done any homework.”

Generally, young people aren’t at the highest risk for COVID-19. Instead, older adults and people with chronic medical conditions, like heart disease or diabetes, according to the Centers for Disease Control and Prevention. Nonetheless, young people still have the potential to spread the disease.

On Monday, Governor JB Prtizker declared a state of emergency in response to COVID-19. As of Thursday night there have been 32 confirmed cases in Illinois.

Live on campus? Here’s what we know so far and what resources are available.

After finding out on Monday that an employee working on the TV show NeXt, which films at Cinespace, was confirmed to have COVID-19, DePaul canceled classes at Cinespace Chicago Film Studios for the rest of the week. DePaul holds classes and hosts prospective student tours at Cinespace, according to DePaul spokesperson Carol Hughes in an email on Tuesday, March 10.

As of Thursday night, no member of the DePaul community has been confirmed to have COVID-19 and the university assures students, faculty and staff that these are preventative, cautionary measures, according to Esteban’s email.

What does this mean for DePaul students?

Most immediately, Winter Quarter final exams will not take place on campus. Interim Provost Salma Ghanem will be in contact with faculty about alternative ways to complete final exams, according to Wednesday’s email. Exams through the Center for Students with Disabilities, however, will happen as scheduled.

All university events are either postponed or canceled until further notice. The status of graduation, which is set for the second weekend of June, is still being evaluated and will be announced during Spring Quarter, DePaul spokesperson Carol Hughes told 14 East in an email on Thursday.

Staff and faculty with “operational responsibilities” will continue to work on campus. However, Esteban recommended managers consider “telework on a case-by-case basis,” especially if an employee’s responsibilities can be completed remotely.

As for Spring Quarter, as many courses as possible will occur online with exceptions for courses in which remote instruction would not be appropriate, according to Esteban’s Wednesday evening email. It’s unclear which courses those will be and when students will know.

Have questions about what’s happening at DePaul? Here’s what we know so far.

Since courses are moving online, Jacobsen said she is going to have to drop some courses.

“I know that doesn’t work well for me, for my learning style,” Jacobsen said. “So the fact that all of my classes are having to be taken online is just really concerning for me because I know, I don’t do anything if it’s an online class. I rely heavily on attendance and being in person and seeing my professor and I know that it works really well for some people, but I came to college to have professors.”

Esteban’s email told students living on campus that they should prepare not to return for Spring Quarter. Hughes said the move-out date for students living in the residence halls is March 22, when finals end. However, she said the university “will work with students who may need a day or two more.” The university is not providing any financial resources to help students with moving costs, Hughes said.

“I’m 2,000 miles from home,” said freshman Juliet deFreitas. She lives in Clifton Hall, and is from San Diego, California. “I had my flight already booked for spring break which is on the 18th, which is six days from the email they sent us to finish my finals, say goodbye to everybody and then pack up my entire dorm, and I don’t know where I’m going to put my things.”

If students have reason to stay on campus, or nowhere do go, they need to fill out this form by Monday, March 16, at 5 p.m. Students who are not staying on campus will be refunded for all housing, meal plan and Medcare charges, as long as they complete the move and check-out process by March 22.

DePaul canceled spring break study abroad trips on Monday, March 9. All summer study abroad   trips were canceled as of Thursday, according to an email sent by the director of study abroad Martha McGivern. Students will be enrolled in an equivalent program.

Earlier this month, DePaul created a COVID-19 Planning and Response Task Force, which has been meeting daily, according to a university-wide email from Esteban. The task force includes 15 administrators and leaders at DePaul, including Student Government Association president Gisselle Cervantes, Interim Provost Salma Ghanem and director of Health Promotion and Wellness Shannon Suffoletto. The task force does not include any of the university virology professors and includes only a few health professionals.

There are still many unknowns about what the coming weeks will bring for DePaul students and community members, specifically the logistics of moving out, online courses, commencement and student employment.

14 East has collected (and is continuing to collect) questions from community members regarding the virus and how it is affecting the DePaul community. We published a Q&A guide with what we know so far, and will continue to update it as more information comes in.

If you have any questions, please submit them in the Google form below.

What You Need to Know About COVID-19