Students Living on Campus During the Pandemic Adju...

“I always take a walk at around 8 or 9 (at night),” said Ty Lu, a student living on campus. “I walk by McCabe — where I used to live — I walk by the elementary school. It feels haunted. Almost no people around.”

The coronavirus pandemic and the resulting stay-at-home orders around the United States have led people to shelter inside their homes. Universities across the United States have closed campus buildings and stopped in-person classes and other events. DePaul University, like most academic institutions, moved classes online for the Spring and Summer quarters.

The closure of university facilities has significantly affected students who were living on campus before the closure. Most students who were living on campus were forced to return to their homes. DePaul has kept the Belden-Racine dorm open for certain students to stay in for the Spring Quarter along with a small number of students at the University Center in the Loop, according to Rick Moreci, the director of Housing, Dining and Student Centers.

Lu, a sophomore staying at Belden-Racine, said that his decision to apply to stay on campus stems from his status as an international student and safety issues of flying home.

“Personally I do not think it is a good idea to take a flight home,” he said. “The enclosed space is too risky.”

Lu also said that since he lives in China, the time conflict between classes would have been tough to deal with.

Similarly, Siddharth Maurya, a freshman from Mumbai, India, said that his decision was also based on wanting to avoid traveling back home.

“India went on lockdown and I could not go back because my flight got canceled,” he said.

To ensure that social distancing is being followed in the dorms that are still operating, Moreci said DePaul has enacted special policies to protect the students living on campus.

“In addition to all the normal policies, we also added an additional restriction during this time which is that no resident is allowed to have any guests,” Moreci said. “This is so we can continue to stop the spread of the virus and thus only want people residing in the hall to be there. This no-guest policy will be in effect all quarter.”

Along with the guest policy, dining has also been overhauled to guarantee that social distancing is followed and contact is limited.

“All students living on campus have a meal plan and we are serving ‘to go’ meals only, two times a day (brunch and dinner), seven days a week,” Moreci said. “Students need to come to the Student Center to get their food. Students also have access to our convenience store in the Student Center where they can use flex dollars to purchase items and bring them back to their hall.” 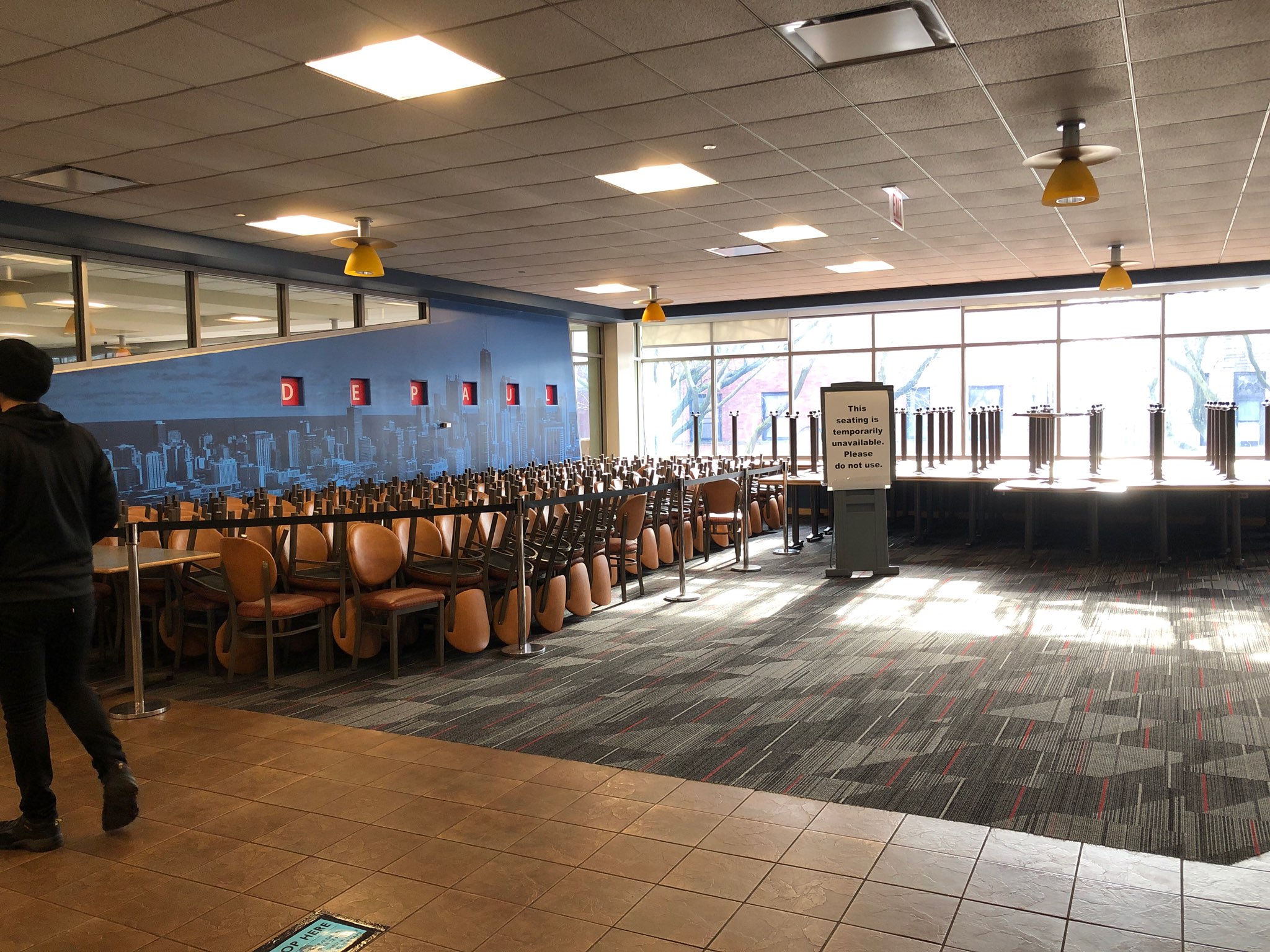 Chairs are stacked where students used to be able to eat in the Student Center. Siddharth Maurya.

Maurya, who is staying at Belden-Racine, discussed the dining options and the quality of the food.

“They serve all kinds of food,” he said. “The food quality has not changed at all, if anything they make the eggs on the spot right now, so I am happy about that.”

Lu spoke of the sanitation of the dining area.

“Before they let us check in (to the dining area), they have already sanitized the area,” he said.

Although the university and its food distributor, Chartwells, have put in place policies to increase safety for the students, an employee tested positive for COVID-19 on April 24.

“I am pretty worried about it,” said Lu.

Maurya is also worried about the situation with Chartwells.

“I did not go (to the student center) today,” Maurya said. “I do not know what I am going to do about that.”

The university has placed restrictions for life inside Belden as well. While common areas are open along with the park between Belden-Racine and Munroe Halls, limits have been placed on the number of students allowed in common areas at the same time.

“No more than two people are allowed to be in the common areas at once, though you can still meet other people,” Maurya said. 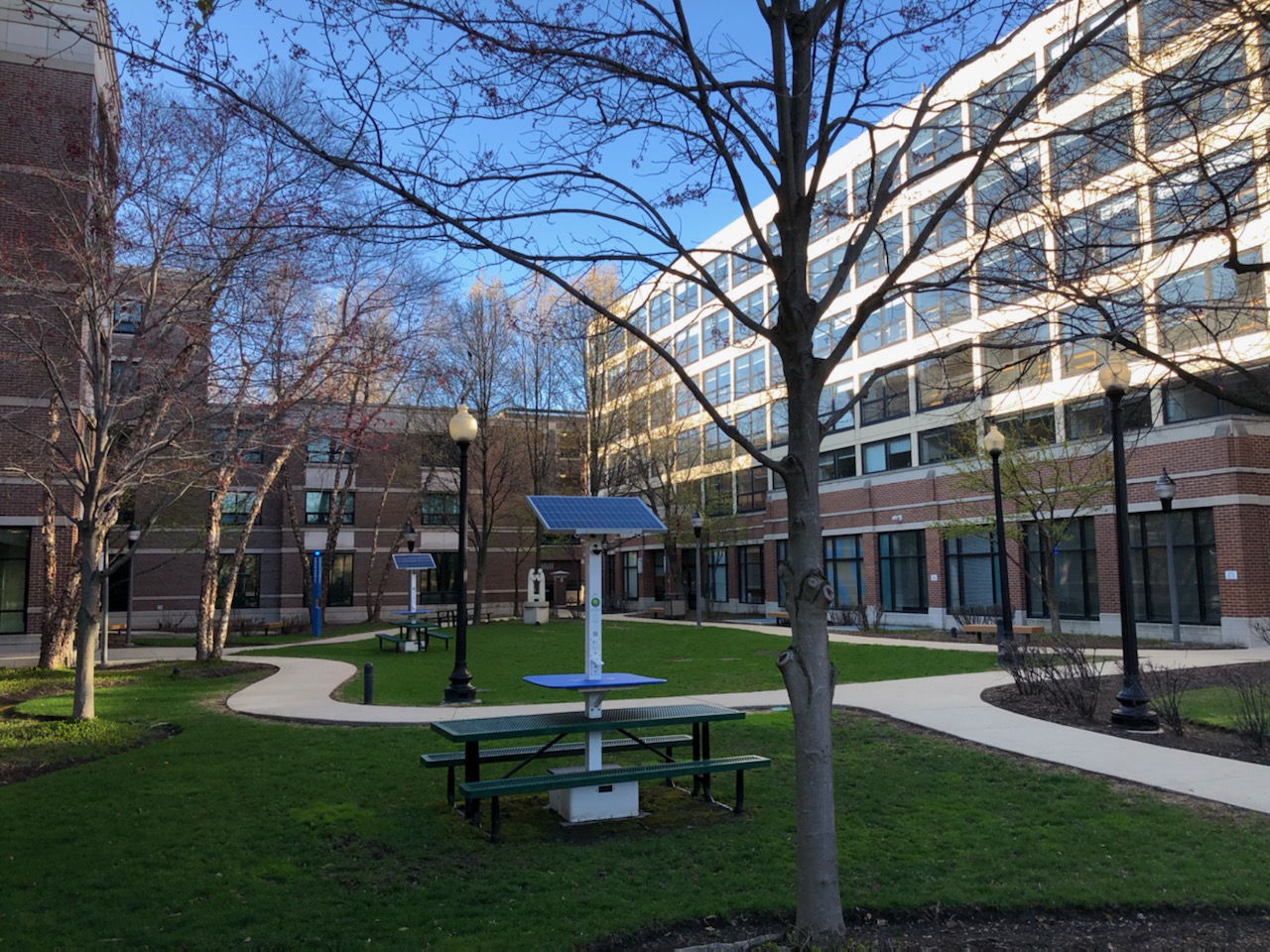 Moreci also said that residents have been supplied with a microfridge (refrigerator/microwave combo) in their rooms for any reheating and food storage.

With a majority of the buildings on the Lincoln Park Campus closed, including all the dorm buildings other than Belden-Racine, campus is much calmer than during a normal term.

“Now that there are not a lot of people living in the dorms, it has been really quiet,” Maurya said. “I never really knew that the quiet could be so scary and depressing.”

During the day, however, the neighborhood still seems to be taking advantage of time spent outside.

“Outside the dorms there are still a lot of people walking around,” Maurya said. “If you look out the window you are bound to see at least one person every three to four minutes, which is kind of scary. I see people walking their dogs, jogging, some with their friends, or some families. It is far from empty.”

Lu said he saw the same occurrences, but with much less activity at night.

“When it is about 7 p.m. there is almost no one outside,” he said. “During the Winter Quarter, even close to 9 there were still so many people outside, but now there is no one.”

Maurya said that sometimes loneliness can be an issue, but DePaul also has resident advisors in the dorm to help have remote events.

“We have Zoom games and stuff, so we are virtually connected,” Maurya said. “I do feel kind of lonely, but I talk to family back in India to keep myself busy.”

Security is the same for the dorms as swipe access is still required, Moreci said, and all mail services have been switched over to Belden with all packages being delivered directly to the dorm.

As classes continue for the Spring and Summer quarters, campus will remain sparsely populated. Even though it gets quiet on campus at night, Lu said he appreciates it.

“After 7 p.m. there is almost no one around, but I love the silence,” he said.