Will Chartwells Cater to Employees During Coronavi...

Will Chartwells Cater to Employees During Coronavirus? 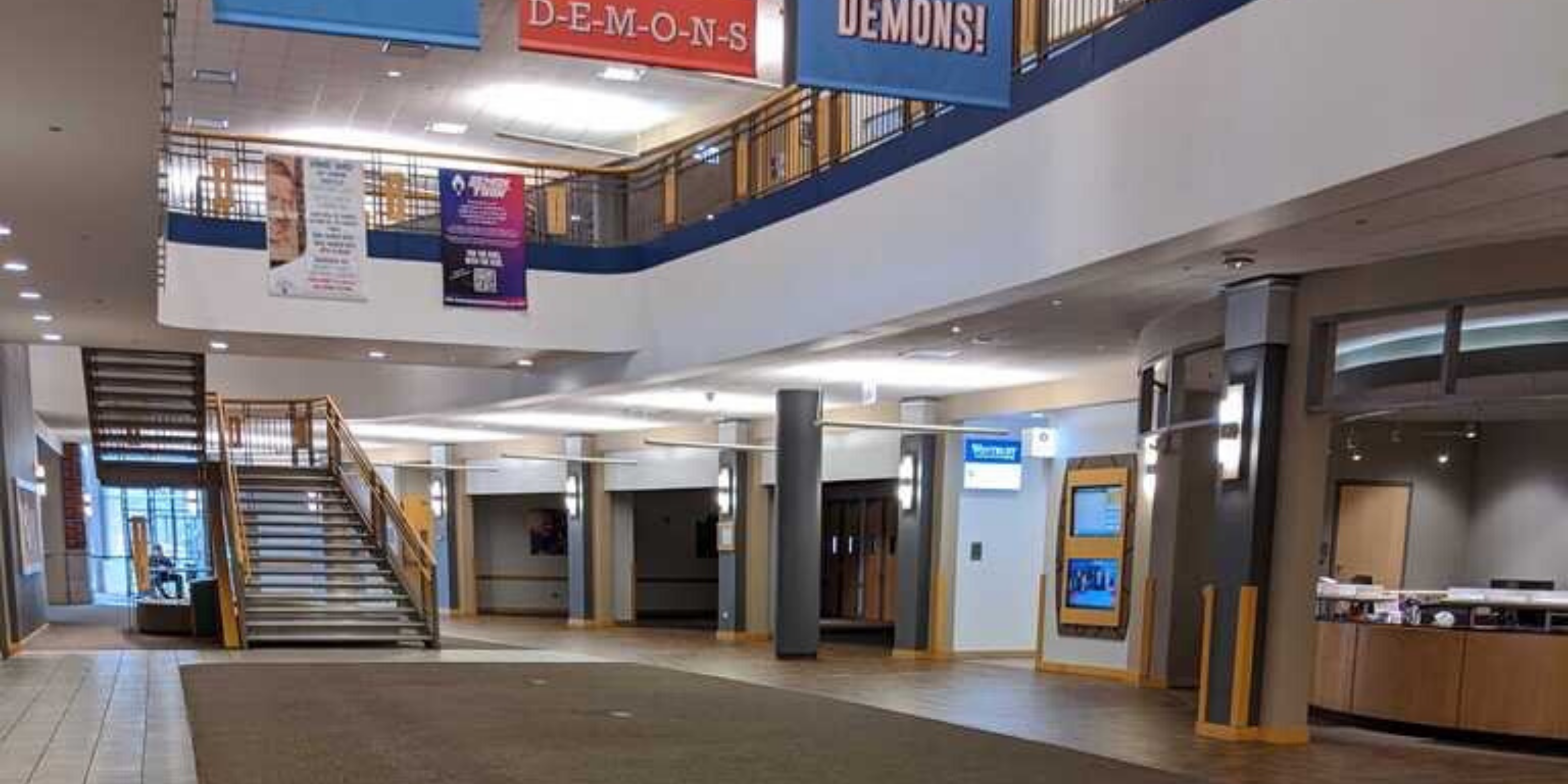 The company that DePaul contracts for all of its catering and student food services, Chartwells Higher Ed, laid off the majority of its workers at the university in March. On Thursday the company confirmed to  14 East that an associate that works in DePaul’s Lincoln Park Student Center tested positive for COVID-19 on April 24, though the employee hasn’t worked since taking the test on April 21. The employee is now self-isolating at home.

Mark Little, regional district manager of Chartwells Higher Ed, said in a statement via email that the associate was not involved in the production or serving of food and that Chartwells conducted a sanitization and disinfection of the entire kitchen and serving area this past weekend.

“We do not believe that the affected associate came into close contact with any other associates or guests” Little said.

While the majority of its staff were laid off in March, between eight and 10 people remain employed on the university’s Lincoln Park Campus preparing and serving food for a select group of students that could not leave campus, according to Noah Carson-Nelson, a union representative of Unite Here! Local 1, the union that represents the Chartwells employees.

“For both your safety and that of our associates, our team has been given face masks and it is a requirement to wear them every day. In addition, personal thermometers have recently been distributed to each associate and they are taking their temperatures twice a day,” Little said.

According to Carson-Nelson, Chartwells informed the union on Monday that a manager, who is not represented by the union, tested positive for COVID-19 on April 21. Carson-Nelson said that the company assumed all employees still working in the Student Center had been in contact with him. The union then asked that the workers be sent home with pay to quarantine for 14 days, in accordance with guidelines put in place by the Illinois Department of Public Health. According to Carson-Nelson, the national umbrella of Local 1, Unite Here! and Chartwells’s parent company, Compass Group, had previously agreed that workers would be paid if they are legally or medically required to quarantine.

“The sticking point here would be are they required to quarantine?” Carson-Nelson said. “It’s really clear from the Department of Health guidance that because they were in close contact with this individual, they should quarantine.”

As of Tuesday, the workers who were in contact with the employee who tested positive will be under quarantine until the beginning of May with Chartwells agreeing to pay them through it.

“Please know that the CDC guidance issued in early April states that any essential workers who worked within 6 feet of the infected associate within the time the employee had symptoms, and 2 days prior to symptoms, conduct daily temperature checks, wear face masks and ensure social distancing,” Little said. “However, out of an abundance of caution, all associates who have been in contact with the affected individual have been notified and have also self-quarantined.”

In an email on April 29, DePaul spokesperson Carol Hughes referred to a statement from Associate Director of Emergency Management Cheryl Hover that said students living on campus were not informed about the case or their possible exposure to it. “Based on information provided by Chartwells, we do not believe that any DePaul students or employees had close contact with the individual who tested positive.”

When asked, Hughes stated that the university is not releasing numbers regarding how many students are currently living on campus or using the Student Center or its dining facilities.

The nearly 90 percent left without pay

Even though the workers under quarantine will be compensated, the company has maintained that it will not pay the other staff it laid off when the school shut down its campus in March.

Like over 26 million other Americans, Yasmin Vinalay was laid off due to circumstances surrounding the COVID-19 pandemic. Except, no one told her.

Vinalay worked for Chartwells at DePaul. She had to call her supervisor to find out that after working at DePaul for nine years, she wouldn’t be coming back to work anytime soon.

“I was just calling to see if I was on the schedule or not because nobody told me anything.” Vinalay said.

It was during the university’s spring break when her manager informed Vinalay that she and most of her coworkers had been laid off. Shocked, she told them they should call to let the other employees know. She says that management only responded that they had enough staff to work for the couple of students who would be staying on campus. The most veteran employees were selected to remain on the job, but Vinalay says there was a dearth of information given to all employees. “Everybody’s important,” Vinalay said. “Even the people that aren’t working.”

DePaul has contracted with Chartwells for nearly two decades, and is the exclusive caterer for the school. Outside catering companies are not even allowed to work on the university’s premises. The company is a division of England-based Compass Foods, the world’s largest food service company. According to Forbes, Compass Group is worth $35.5 billion.

But 84 out of their 90 union employees who previously dedicated themselves to preparing and serving food for students at DePaul’s Lincoln Park and Loop campuses are now out of work. Other institutions have committed to paying employees even as their doors remain shut. The Chicago Blackhawks and Chicago Bulls are compensating the United Center employees for 14 games cancelled due to the pandemic. Chartwells didn’t offer to pay their employees after the layoff.

In response, a coalition of student organizations are demanding that DePaul put pressure on Chartwells to pay the employees, or do it themselves. Senior and Student Government Association (SGA) senator for Mission and Ministry Kelly Garcia is the conduit for SGA and the Chartwells workers, taking their demands to the university. She’s tried contacting offices of the administration but said she hasn’t received any responses.

“We’re trying to pressure DePaul to pressure Chartwells,” Garcia said. “We’re demanding that DePaul find a way to pay these workers if Chartwells isn’t willing to.”

The Chartwells employees subcontracted at DePaul are unionized under Unite Here! Local 1. The union is calling for DePaul, along with other Chicago-area universities like Northwestern, Loyola and Dominican, to make sure the workers are paid until they can go back to work. A virtual rally via Facebook Live because of social distancing standards was planned to take place on April 7, though due to technological issues the protest didn’t take place in real time but was recorded and posted to their Facebook page instead.

Carson-Nelson says Chartwells employed 90 workers at their full swing, but have only held on to about 10 percent as the measures to mitigate the pandemic have unfolded.

The school has not made a public statement about the situation or responded to the student groups petitioning them.

“It’s just crazy because I work for these people for nine years and they just don’t care,” Vinalay said. She also says to this day the company hasn’t sent information regarding the layoff to the workers it employed.

DePaul spokesperson Carol Hughes said the school is referring all inquiries about the matter to Chartwells. Chartwells did not respond to multiple email requests for comment about the compensation requests over the last two weeks.

Compass Group North America CEO Gary Green wrote in a letter published on the company’s website on April 3 saying, “This was the most heartbreaking decision I’ve ever had to make, but I remain confident that the day will come when these Associates will return to work, managers’ salaries will be restored and we will resume normal operations,” and that the senior leadership team, including himself, took a salary decrease.

Vinalay says she feels empowered by the students helping the cause. “DePaul and Chartwells will see that we have a lot of communication with them and therefore we have their support,” Vinalay said. “We know these students so you know, because we see them everyday.”

Carson-Nelson said for many of the employees, Chartwells was their only source of income. Vinalay herself is worried about how she’ll manage her finances now. “I try not to think about how we’re going to do it based on money with bills, and food to provide,” Vinalay said.

Vinalay has four kids and the family lived off of her income from Chartwells. She’s tried filing for Illinois’ unemployment insurance, but she says the process has been confusing and some of the calls she’s made to the office haven’t even gone through. The country has seen a record-breaking number of unemployment claims in the face of industries being temporarily shut down due to COVID-19 and the social distancing measures being put in place to curb its spread. Illinois has been bogged down with over 737,000 claims filed since March 16.

Tiffany Perez, a cashier who has worked through Chartwells at DePaul for nearly two decades, says she thinks it’s unfair for the employees to be told to file for unemployment insurance when many of them may not qualify for government assistance.

A person might not be eligible for unemployment insurance for reasons including citizenship status, previous earnings, or if they are working more than one job.

Perez said that Chartwells employees need money to at least stay afloat to be able to pay bills like rents, mortgages and car payments. “I’m a homeowner,” Perez said, adding that the bank can give her extensions for 60 days or 90 days to catch up on their bills, but will also charge her interest.

Perez said she’s looking forward to going back to work at DePaul whenever that opportunity becomes available. Like the other unionized workers, she will not have to reapply if the layoff is lifted. “I love my job, that’s the reason why I’ve been there for 20 years,” she said. “Watching the students come in as they grow and leave out — it’s like a family and I most definitely plan on returning.”

DePaul student organizations like SGA, Black Student Union and Students for Justice in Palestine, along with Unite Here! Local 1, created a petition to be sent to DePaul President A. Gabriel Esteban, with their request that he push for the employees to be paid. To appeal to DePaul’s Catholic mission, the petition quoted Pope Francis’s March 12 homily where he called on others to “ask the Lord for the grace not to fall into indifference.”