The Illinois Primary, During a Pandemic

I Celebrated My 20th Birthday ..

The Illinois Primary, During a Pandemic 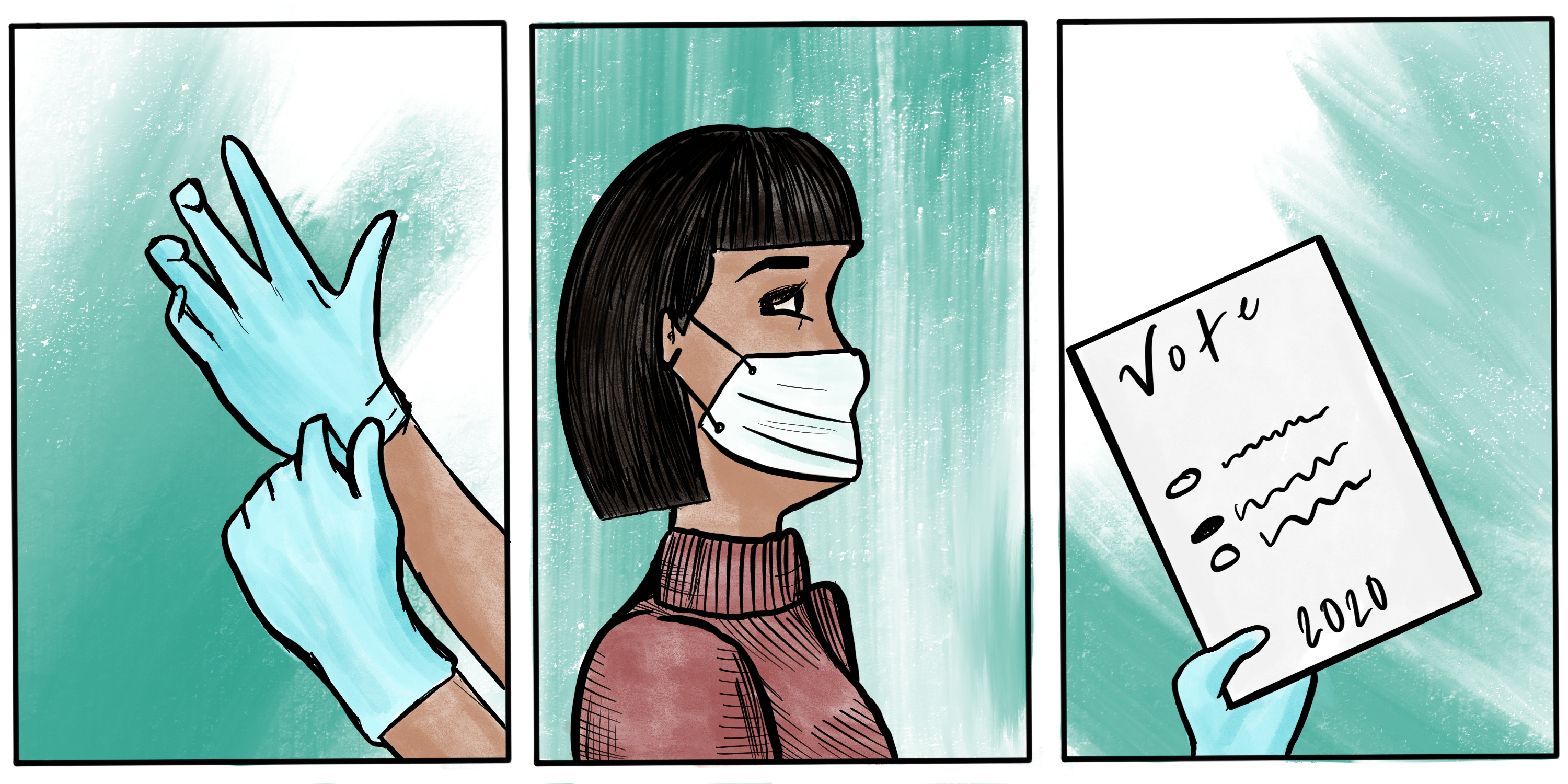 Voting was the exception to calls for social distancing in Chicago on Tuesday, March 17, for the Illinois primary election.

Despite the Centers for Disease Control and Prevention (CDC) recommendation to limit group gatherings to 50, President Donald Trump’s 10-person limit and Illinois Gov. J.B. Pritzker’s own 50-person limit, Pritzker chose to not postpone the election.

Arizona and Florida followed suit and held their elections. Ohio decided to postpone the night before the election was scheduled, after disputes between the governor and the courts, and so did Georgia and Louisiana whose primaries had been scheduled for late March and early April, respectively.

The decision to continue the Illinois primary despite concerns of COVID-19 diverged with Pritzker’s proactive measures to stop the spread of the virus – shutting down Illinois restaurants and bars and canceling school statewide until March 30 (although more recently, Chicago Mayor Lori Lightfoot extended the cancelation to April 20).

The Chicago Board of Election Commissioners said Pritzker should have postponed, blaming COVID-19 for low turnout and lack of necessary equipment at polling places, and Pritzker responded with accusations of “political posturing.”

Despite criticism of the decision not to postpone, turnout surpassed the 24 percent record low in 2012. Turnout of registered voters in Cook County is currently estimated around 32 percent. This is roughly half of the 53 percent turnout in 2016.

Matt Dietrich, spokesperson for the Illinois State Board of Elections, estimates that Illinois will see a statewide turnout of roughly 24 percent, which pales in comparison to 2016’s 46.5 percent, though the board won’t know for certain until the board certifies the vote on April 17.

For some voters who did come out on Election Day, voting was a breeze even with COVID-19 concerns – voters cited going in and out of precincts with hands sanitized.

“I went around 9:30 and I was the twentieth person to vote in my precinct … The judges said it had been slow,” said design student Sasha Rosenberg, who voted at Erie Elementary in West Town. “I brought my friend and forced him to register and it was so easy.”

Some found it even easier to vote, bypassing long lines and crowded quarters.

“It was good, almost better because it wasn’t crowded,” said pilates instructor Taylor Meheran, who voted in Pulaski Park. “They have hand sanitizer on all the booths, but you share a clipboard, pen, voting stand, etc., so not totally quarantine proof … usually it takes a long time waiting for the first part to get the ballot.”

For many others, however, last-minute polling place changes and election judge shortages resulted in hours-long lines and confusion over the location of polling places. In Cook County, at least 200 of 2,069 polling places had to move, according to the Illinois State Board of Elections.

Max Johnson, art handler at the Museum of Contemporary Art, voted at the Chicago Police Department off the Addison Red Line, and said that he waited for roughly two hours in a line of people, some of whom didn’t even live in his district.

“I saw numerous people look at the line and say, ‘I had no idea it would be like this!’ and then turn around and walk away,” he said.

While his precinct let voters over 60 skip the line, Johnson said he didn’t feel altogether safe.

“Knowing I’m young and the virus has a low mortality rate among my age bracket I guess brings me some solace,” he said. “However, based on how contained the voting area was and how there was a huge lack of sanitation or following CDC guidelines of social distancing.”

Johnson, alongside some other voters, wore a mask and gloves.

“I made myself and my parents wear gloves and we washed our hands before putting them on and then threw them out when we were leaving our polling place,” said Ona Sian Gleichman, a 3D exhibition designer at the Field Museum who voted at the Lincoln Park Library. “…and never touched a surface with our bare hands.”

DePaul senior Alyson Dressman said she and her roommate spent 1.5 hours in line at Harry S Truman College in Uptown, alongside what she counted to be over 150 voters waiting for four voting machines. They then went to another polling site at the Bezazian Branch of the Chicago Public Library with shorter lines, which they heard about from a fellow voter.

Scene from the polling location at Truman College after polls officially closed. This doesn’t look like it’s up to CDC standards. #IllinoisPrimary #COVID19 pic.twitter.com/8l3BmQMgKK

These are just some of the many voting mishaps in Chicago on March 17.

Currently in a poorly ventilated basement of the Gage Park early vote site, the second largest Latino district in Illinois. The current wait time here is just over an hour. Folks have already started to leave saying they aren’t willing to risk their health. #IllinoisPrimary pic.twitter.com/jAxoI6mkcG

Hundreds are currently waiting to vote at Chicago city hall in a line the stretches out the building and down two blocks. The person at the front of the line has been waiting 3 hrs to vote. #IllinoisPrimary #COVID19 pic.twitter.com/qDrvYH7NwE

THREAD: voters trying to vote today, and what they’re finding.

“I hope I get the chance to Vote for @BernieSanders today. Showed up to vote and no one showed up to operate my polling place. I hope they are there when I get off work.” #IllinoisPrimary

The Lawyers’ Committee for Civil Rights Under Law established a helpline to report any election concerns.

Timna Axel, the director of communications for the Chicago Lawyers’ Committee for Civil Rights, said calls ranged from individuals turning up at polling places and being told to go somewhere else to showing up to a closed polling place with no one to direct them to a new location.

“I would say that voters have been disenfranchised,” Axel said, “Particularly voters who are confined under quarantine because of the health crisis. Right now, the election rules don’t give them an avenue to cast a ballot … that’s where we’re seeing the biggest shortcoming right now.”

Axel faulted COVID-19 for causing last-minute changes rather than a specific institution.

“I think everyone’s been in a really tough position,” Axel added. “It’s pretty clear that none of us could have predicted this outbreak progressing quite as quickly as it has and its impact on our institutions. The election authorities have been working hard and we’ve been trying to support them as much as we can.”

Dressman feels situations like her own are indicative of why Pritzker should have postponed the election.

“I think it’s counterintuitive for health professionals (and the President) to be suggesting gatherings of no more than 50 or 10 people, yet we have multiple sites across the city attracting tons of people for long periods of time. And all to exercise our right to vote,” Dressman said. “People shouldn’t have to pick between voting and staying healthy or [staying] smart.”

Others feel similarly, finding the messages to both stay at home and go vote confusing.

“I think people are scared to get groceries, [I’m] sending my boyfriend right now, so how are we expected to vote?” said Alice Julianna, a DePaul alumna. “They tell you to make a voting plan, but now everybody’s plan is altered at least a little bit by the changes.”

In Chicago, voters that did show up ushered in some big changes.