FBI Officials Warn of an Incre..

Petition Pushes Administration on Decision to Have...

Petition Pushes Administration on Decision to Have Online Graduation 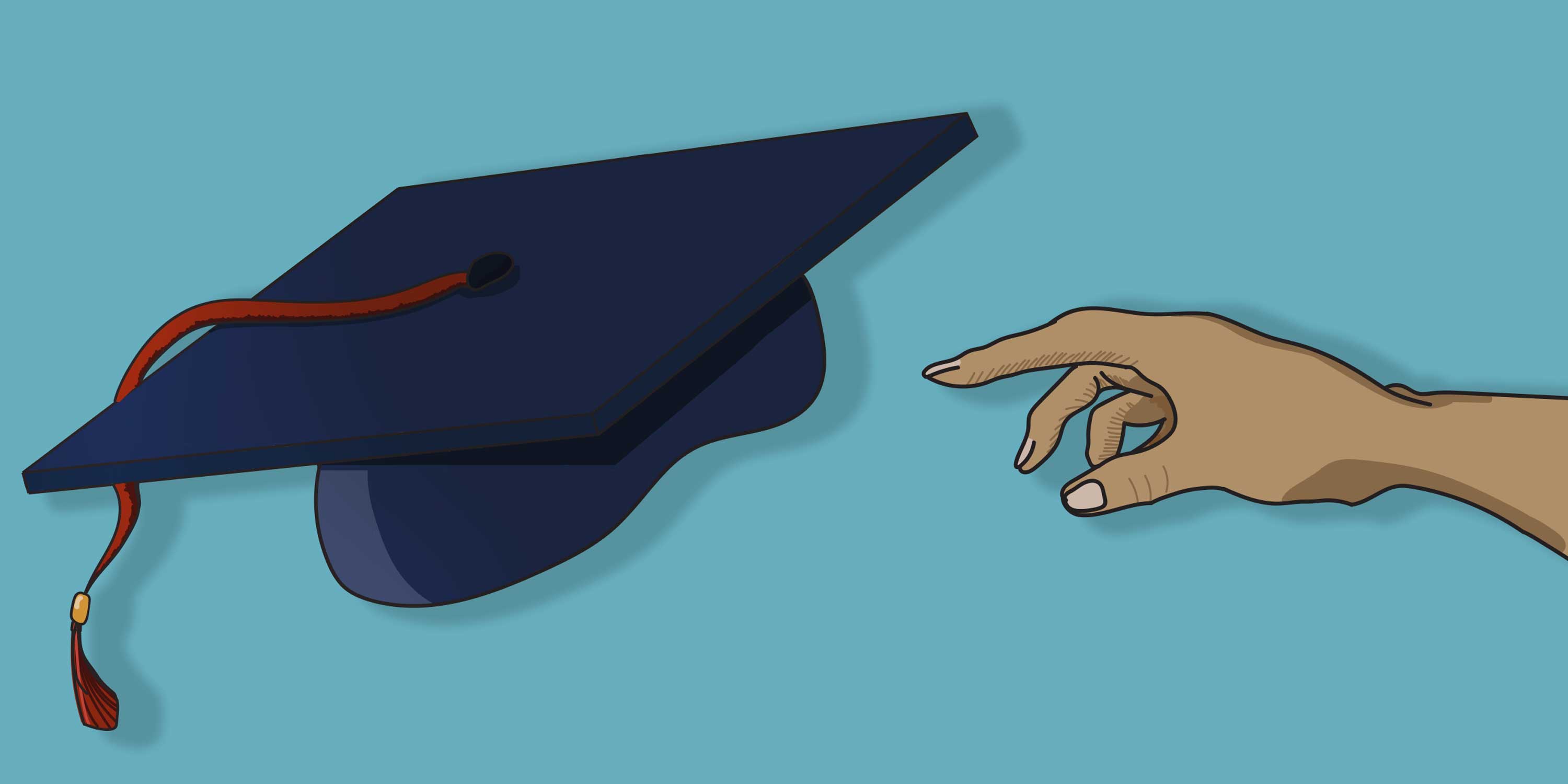 Formal graduation festivities are important to many students, especially for those who are first in their family to attend university.

Fefe Jaber was looking forward to her eleven younger siblings seeing her in her cap and gown, crossing the stage at Wintrust Arena and being handed the diploma that would signify the completion of her B.A. degree in political science. As a child of two Palestinian immmigrants, she wanted them to see this moment and that their goals were attainable. Her mother hadn’t had the opportunity to even finish middle school.

Instead, due to the spread of the novel coronavirus, the pomp and circumstance of DePaul University’s graduation will — as of now — take place completely online.

“People have put so much time into getting to this point, so much energy, so much money, so much trouble, and a virtual family just isn’t going to be enough to reward all that has been done to get to graduation.”

In an email sent on March 27 and signed by President A. Gabriel Esteban and Interim Provost Salma Ghanem, DePaul announced that it would not hold traditional commencements in May or June due to the COVID-19 health crisis.

“The accomplishments you have had throughout your time at DePaul ought to be capped off with a grand celebration. It is in our nature to be with others during times of celebration. Sadly, this is not the year,” the email read. 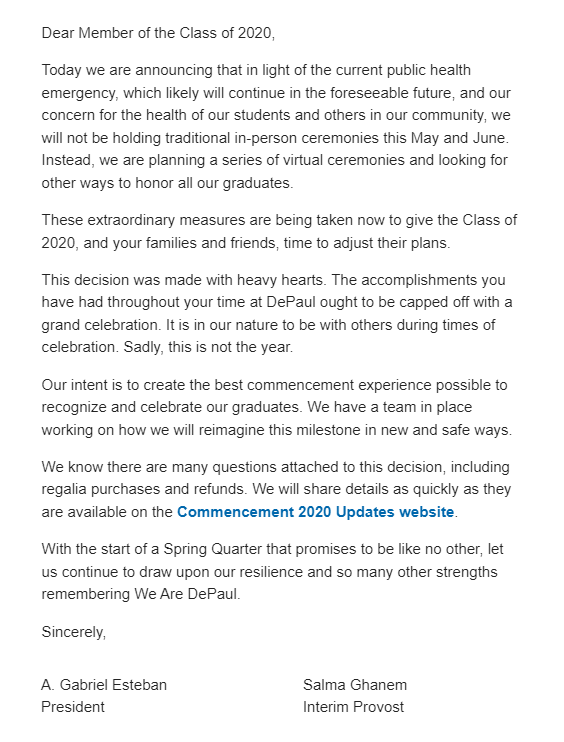 The COVID-19 pandemic, and the social distancing measures put in place to control it, has upended nearly every aspect of people’s lives. Its effects ripple across all areas of society. At publication, there are 7,695 known cases in Illinois with 3,427 in the city of Chicago. On April 1, Governor J.B. Pritzker extended the stay-at-home order, originally set to end on April 7, until the end of the month. Just over two weeks ago, Forbes estimated that over 80 higher-education institutions across the country have postponed  or canceled in-person ceremonies. Today, that number is likely much higher and the world prepares to practice social-distancing for the foreseeable future.

Inspired by several other schools, like the University of Wisconsin-Madison and the University of Illinois at Urbana-Champaign, — that initially cancelled in-person ceremonies but ultimately retracted this decision after student protest, opting to postpone instead — Jaber created an online petition, asking DePaul’s administration to alter their original decision to not hold in-person ceremonies, and choose to postpone the commencement instead. She says within one hour of posting it, the petition had 1,000 signatures. Now, it has more than 8,500. She hoped the petition would convince DePaul to alter its decision.

The “reasons for signing” section on the petition website is saturated with comments from students who are the first in their family to graduate college, and who are the children of parents who immigrated to the United States, expressing how much this achievement means for them and their families and that the pomp and circumstance is a vital part in the recognition of their accomplishments.

One of the signatories, public relations and advertising student Sabrina Miresse said she broke down crying when she saw the news that commencement had been canceled. Miresse is the first in her family to attend college. She was looking forward to having her family see how they had supported this achievement.

“My mom had me when she was 19, was kicked out of the house and didn’t have any financial support. She was a working single mom for a really long time, and she didn’t have the opportunity to go to school or even see that as an option. And so furthering my education was always something I wanted to do,” Miresse said.

Like Jaber, Miresse isn’t flippant about the public health crisis. However, she wishes the school would let students hold out hope for an in-person graduation down the line.

“There’s a lot of horrible and uncontrollable things that are happening right now. It’s just the lack of hope that the university is allowing us to have this was so crushing,” Miresse said.

On Wednesday, the university broadcasted a remote meeting between President Esteban, Interim Provost Ghanem and three other DePaul administrators where they answered questions submitted by the university community. Esteban acknowledged the heightened disappointment felt by first generation college students who, he said, had overcome so many challenges.

In response to the question of why pushing commencement to August isn’t an option for DePaul, Ghanem responded that they had, in fact, not canceled commencement. Rather, the virtual ceremony in June will be held in place of the traditional in-person ceremonies, and the university is looking into arranging possible future in-person celebrations or commencements — with one option being a joint commencement for the 2020 and 2021 graduates in June of next year.

Miresse said she sent emails to the president, provost and the College of Communication, the umbrella college for her Public Relations and Advertising degree. She hasn’t gotten a reply from any of them.

She says she’s disappointed in the lack of response from the school that she sold her car and took out student loans in order to pay for and attend. “I made a lot of sacrifices to be able to move to Chicago. It’s just been crushing and honestly feels like a slap in the face from DePaul. It just seems like they don’t care about students,” said Miresse.

On April 2, the university sent an email saying they had taken the disappointment and sadness felt by students in reaction to their previous decision under consideration, and are exploring ways to celebrate, while keeping in mind that the circumstances are highly precarious. 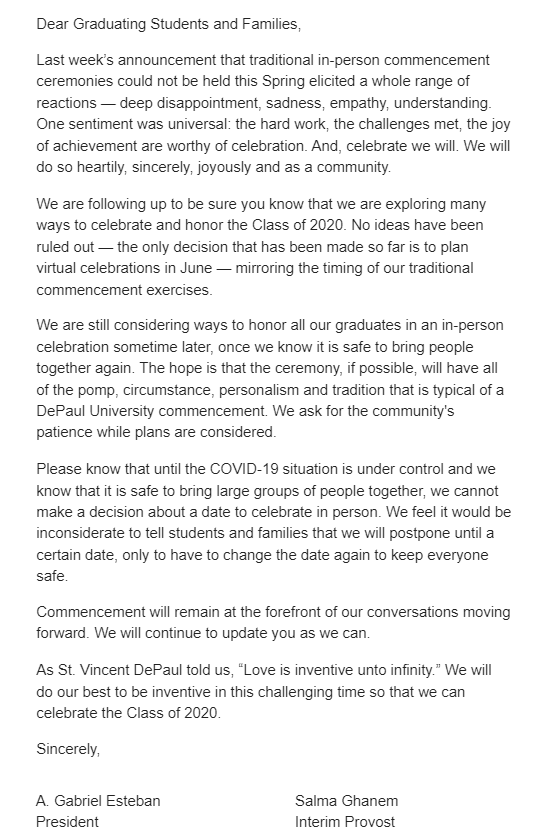 Email sent to students on April 2

“We are still considering ways to honor all our graduates in an in-person celebration sometime later, once we know it is safe to bring people together again,” the email read. “We feel it would be inconsiderate to tell students and families that we will postpone until a certain date, only to have to change the date again to keep everyone safe. Commencement will remain at the forefront of our conversations moving forward. We will continue to update you as we can.”

However, Miresse is still upset at how the situation continues to be handled, wishing DePaul would give more concrete indication on what direction they’re thinking about going towards or sending out a survey to students. Though, she does understand that it’s hard to determine when big gatherings will be appropriate.

“DePaul is only saying that they’re still considering other options because of how much backlash they got. I don’t think they’re actually looking into other in-person options,” Miresse said.