Finding Solace in a Public Wil.. 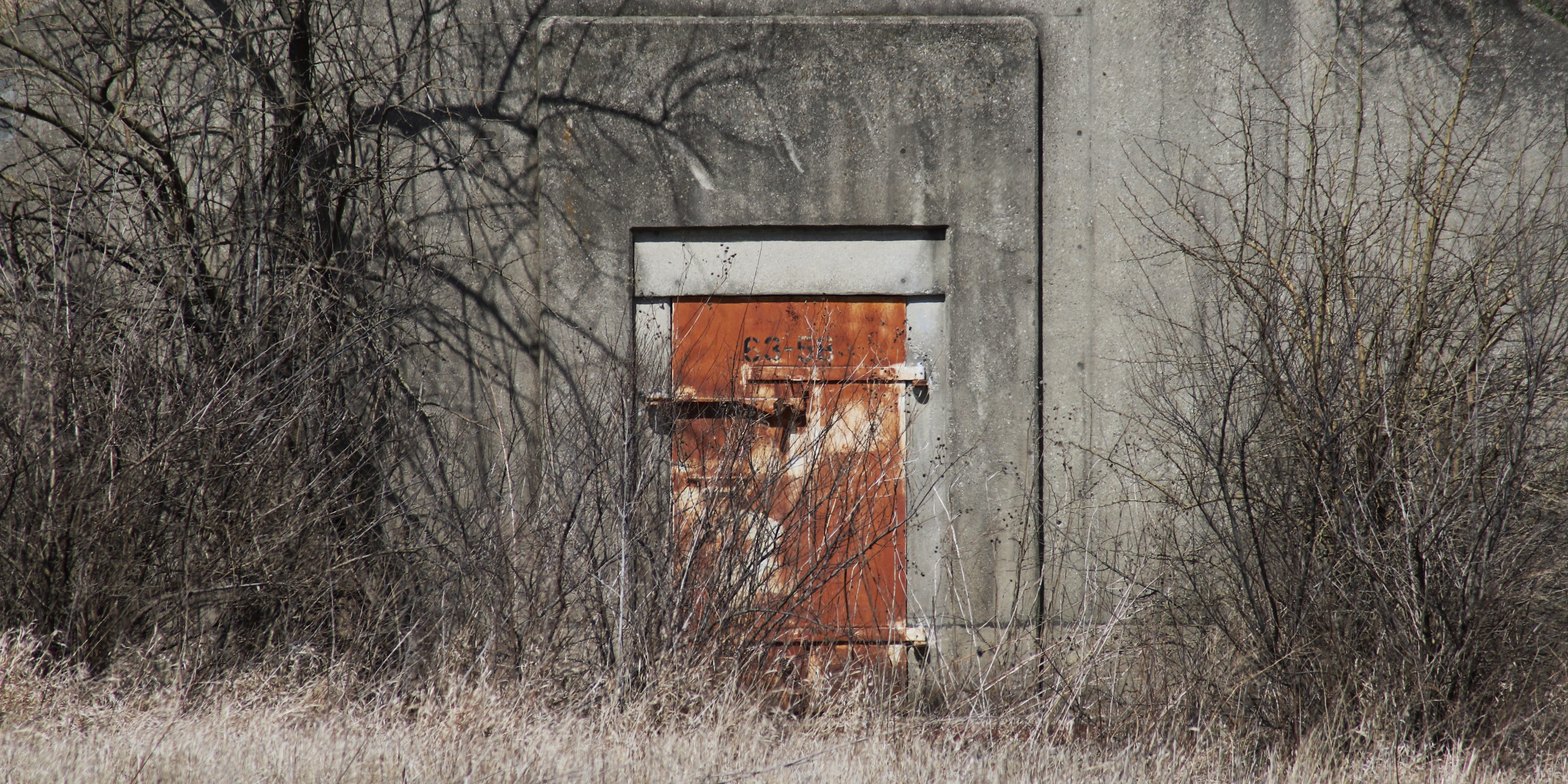 This piece was aired at 14 East’s virtual live storytelling event on the theme of wilderness in May.

On a list of states with inordinate amounts of natural beauty, Illinois might not come to mind. But its rolling prairies and sprawling forests sculpted by glaciers create an unexpected and seemingly untamed sort of beauty. Only through taking a closer look at the world around us do these spectacular landscapes appear — untouched, unmarred and naturally wild.

But in reality, these spaces weren’t created by nature alone. Instead, decades of land misuse, pollution, manufacturing and clever remediation have worked to shape some of the state’s most remarkable patches of wilderness. 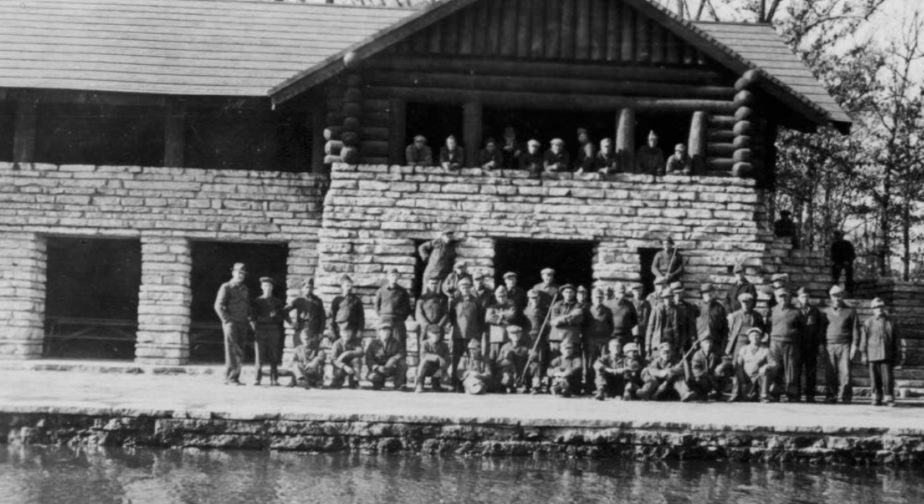 Members of the Civilian Conservation Corps Company V-1668 outside the completed boathouse at Fullersburg Woods, in DuPage County, Illinois, Nov. 1936. Photo by the U.S. Department of the Interior, National Park Service, courtesy of the Forest Preserve District of DuPage County Collections

About a 45-minute drive from the Loop, down I-355 and straight into the throes of suburban Chicagoland, is DuPage County, with its pockets of forest preserves that hide behind strip malls and schools, between churches and office buildings.

Most striking are the trees that tower above everything else, standing as a backdrop for the suburban life below. Trails weave in and out of parking lots and sidewalks; they crop up like portals, bikers popping out from some forested, unknown world. The green spaces of these suburbs either trace along the DuPage River or along major highways, serving as buffers between the surrounding nature and imposing industry.

What the thousands of highway travelers speeding to their destinations might not know is that it was the unusual, yet effective, relationship between nature and industry that ultimately created those beloved forest preserves and nature centers. It came down to rich men chasing the fad of hobby farming as a catalyst for conservation efforts, according to Shannon Burns, the education program coordinator at the Mayslake Peabody Estate in DuPage County.

“DuPage County is kind of unique,” Burns said before describing the “gentleman farmer movement,” an activity that could only belong in the Midwest during the turn of the century .

“It was a bunch of wealthy guys who had decided to become farmers, kind of as a hobby,” Burns said. “They bought up all these small farms and created large chunks of open land — they fancied themselves to be conservationists.”

The gentleman farmers, often composed of industry barons like coal mogul Francis Stuyvesant Peabody, eventually either left the hobby or died. As they did, the local forest preserve districts began purchasing pieces of land that would go up for auction, thus acquiring hundreds of acres of open space.

The preserve district had the land and a plan they wanted to implement. All they needed was the labor, and that’s where the Civilian Conservation Corps came into play.

Following the Great Depression, President Franklin Delano Roosevelt established the Civilian Conservation Corps, or the CCC for short, proposed as a way for unemployed young men from 18 to 35 to engage with their communities and the wilderness while getting paid. Through the program, recruits became stewards, constructing shelters, boathouses and natural-seeming features, taming the wild that we now experience today. 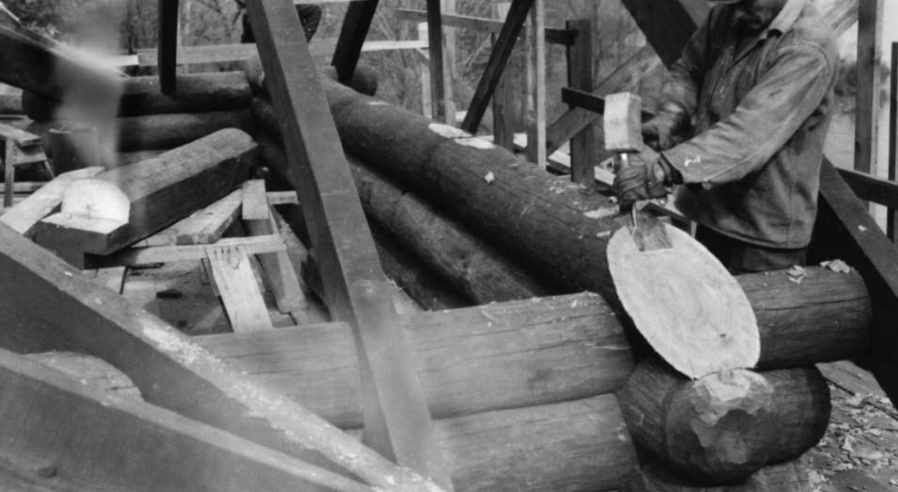 Construction by the Civilian Conservation Corps of the Fullersburg Woods Boathouse, November 1936. Photo by United States Department of the Interior, National Park Service, courtesy of the Forest Preserve District of DuPage County Collections

Between 1933 and 1938, the CCC Company V-1668 set up camp in the Fullersburg Woods on the eastern edge of DuPage County. The company, composed entirely of war veterans, found themselves in a grove of trees along the winding Salt Creek in Oak Brook, Illinois. They were there to sculpt the land into what would then be the county’s largest forest preserve.

The company did more than plant a few trees and clear trails for hikers. In the wooded landscape, members of the CCC dredged the water itself to create free-standing islands in the middle of the creek’s curves and bends — landforms that still stand to this day. The CCC then crafted bridges and shelters throughout the park, most notably erecting a stone and timber boathouse that currently functions as a nature center.

“It’s almost like events conspired, to have the farmland here, to be able to buy it cheaply, then the CCC came along to provide affordable labor to get them in shape for the public to use,” Burns said. “To me, it’s like an amazing confluence of events coming together to give us what we have today.”

Eight miles south of the Fullersburg camp was a large patch of land, bisected by Sawmill Creek, a twisting stream that connects the Des Plaines and DuPage rivers. That forest preserve-to-be would soon become neighbors with Argonne National Laboratory, one of America’s first national research laboratories and the successor to the Manhattan Project.

But before all of that, the creek itself was like any other: the water ambled past, with minnows darting around rocks and fallen branches. But visiting the site now reveals a different addition: a multi-tiered waterfall, nestled at the bottom of a sloping ravine.

The waterfall blends so seamlessly into the creek that, for many, it seems like a hidden gem, one that nature created just for them — a secret, hidden through a thicket of trees. In reality, the secret was crafted, not by Mother Nature, but by hand. 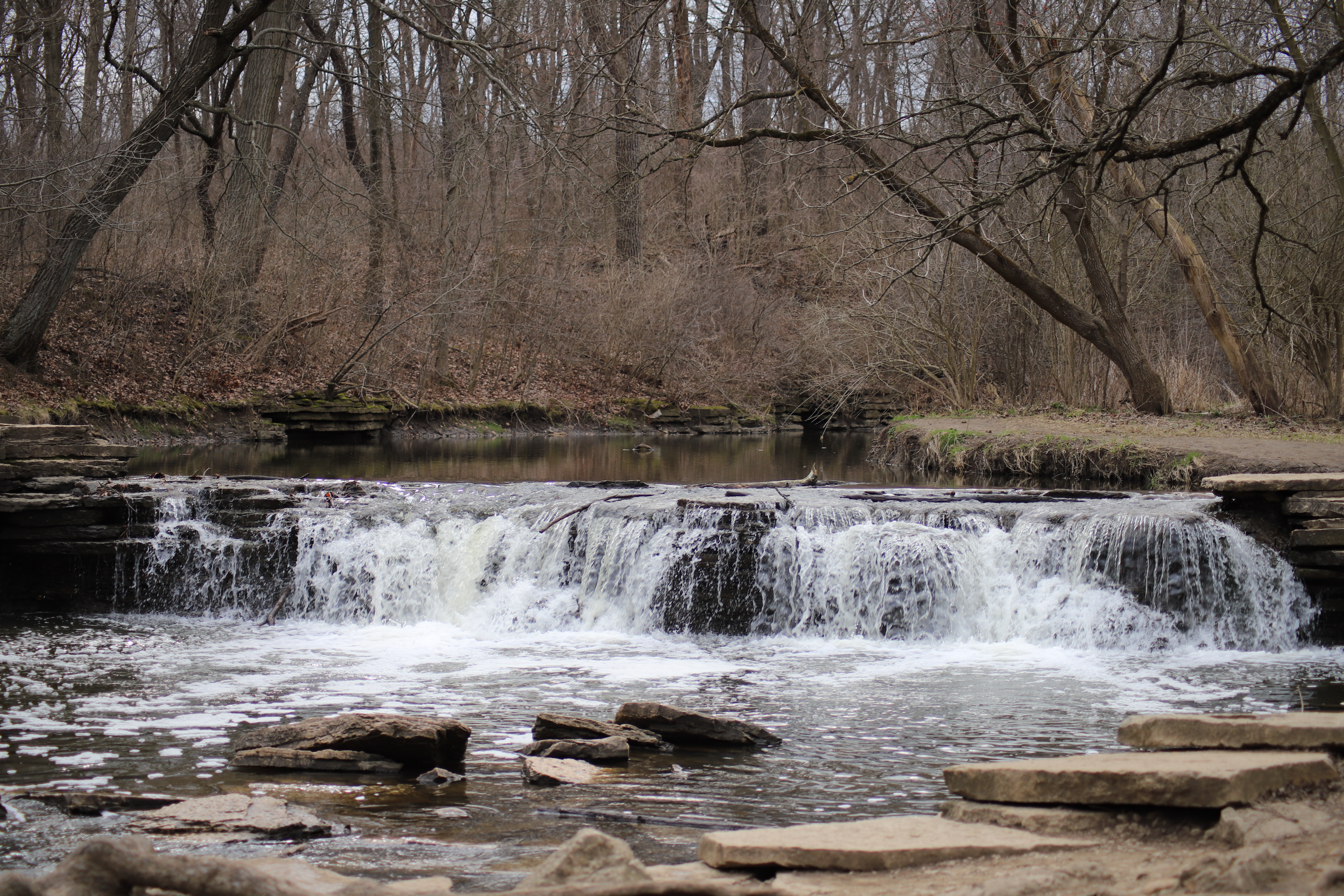 Waterfall Glen, originally created as a dam, was transformed into a multi-tiered waterfall made with rock from the quarry that used to exist beside it. Cam Rodriguez, 14 East

Waterfall Glen is another area that was brought into being through the Company V-1668. The site, which used to be a rock quarry, now forms a ring around the lab, surrounding squat white buildings protected by barbed-wire fences that peek through the trees, disappearing and reappearing during the natural descent to the waterfall itself.

The site is so hidden behind trees that if you squinted, or if the trees became dense enough, you’d miss it. The buildings, home to groundbreaking scientific discoveries, are but a small footnote in comparison to the scenery surrounding them — another small reminder of the cohabitation between nature and industry in such a seemingly wild place. 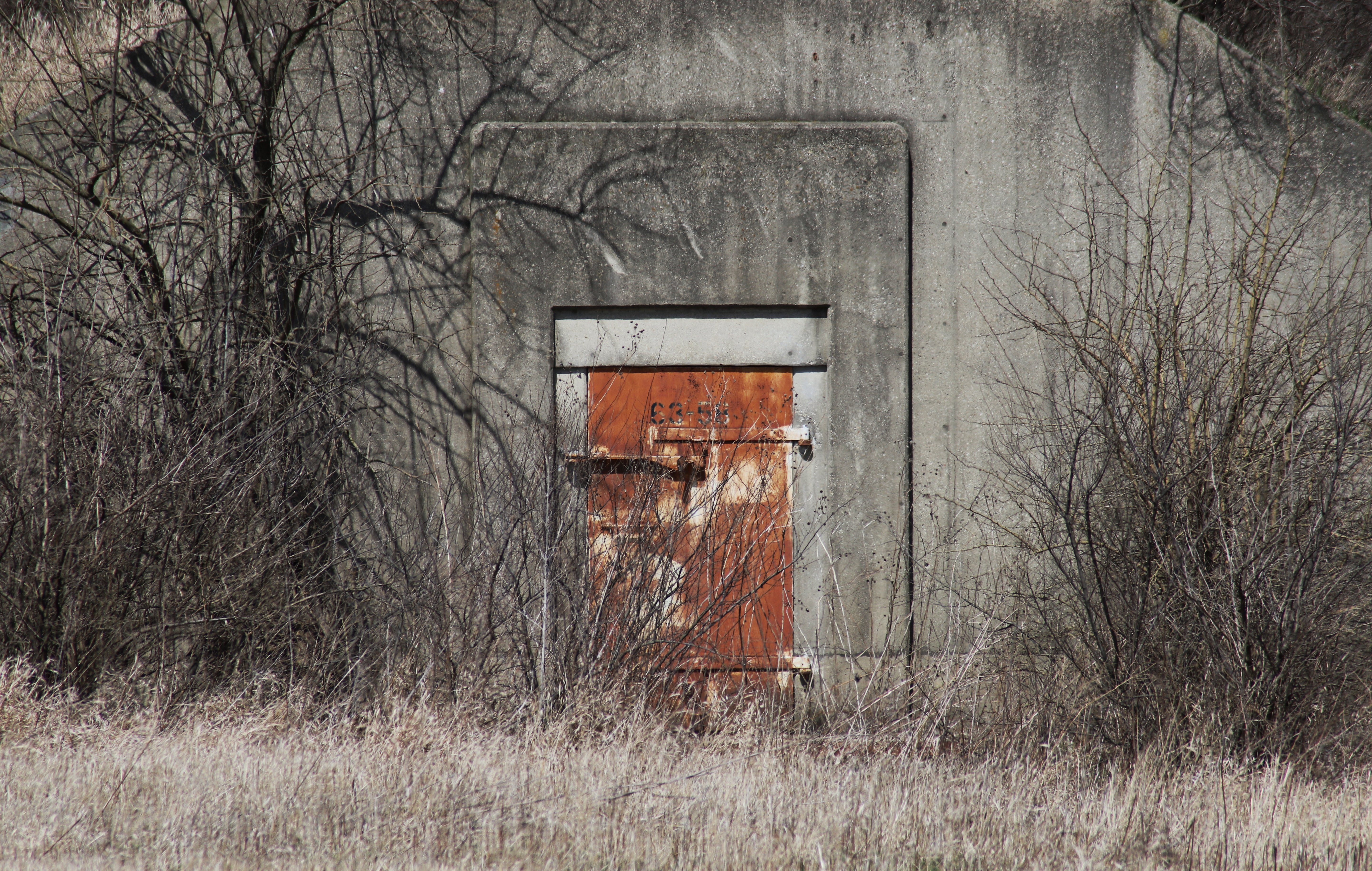 However, there are times when the man-made features of the land take more than they give, an imbalance that Illinois’s prairie is no stranger to. While the state used to have 22 million acres of unfettered prairie, only a small fraction of that is left after the majority was redeveloped for business and agricultural use through European settlement.

Formerly owned by the United States Army, the prairie became known for being home to the Joliet Army Ammunition Plant, which crafted weapons for World War II and stored them until the end of the Vietnam War. The production, storage and testing of these ammunitions, including TNT, which led to the mass contamination and degradation of the environment, as proven by the creek’s in the area running red.

But remediation is in Illinois’s nature — literally. Today, Midewin stands as a natural space in progress, transitioning from the Ammunition Plant to a National Tallgrass Prairie in the early 2000s. The contaminated soil from various parts of the land, which were designated as a Superfund site by the EPA, was eventually deemed clean in 2008, three years ahead of schedule. In 2015, Midewin introduced yet another remediation project, a herd of American Bison, to graze on the prairie once again.

Even through this change and transformation, the land has holdovers from its past.

Army bridges, buildings and structures dot the vast horizon, making their presence known. Visitors walking down a crushed-gravel trail see abandoned bunkers on their left, bison grazing on their right. And in the distance? A landfill, alongside an intermodal distribution center, a convergence point of industry and nature that blends in with the scenery like camouflage.

Even more hidden is the contamination of the water table, a destructive trait that remains far beneath the surface of the endless prairie.

Despite its downfalls, the landscape forms a seamless terrain for explorers, with its empty bunkers left in place by the U.S. Forest Service, framed by vegetation. Midewin even promotes a volunteer program to document and research the markings and graffiti within the structures, a shining example of how the land’s history continues to play on into the present. 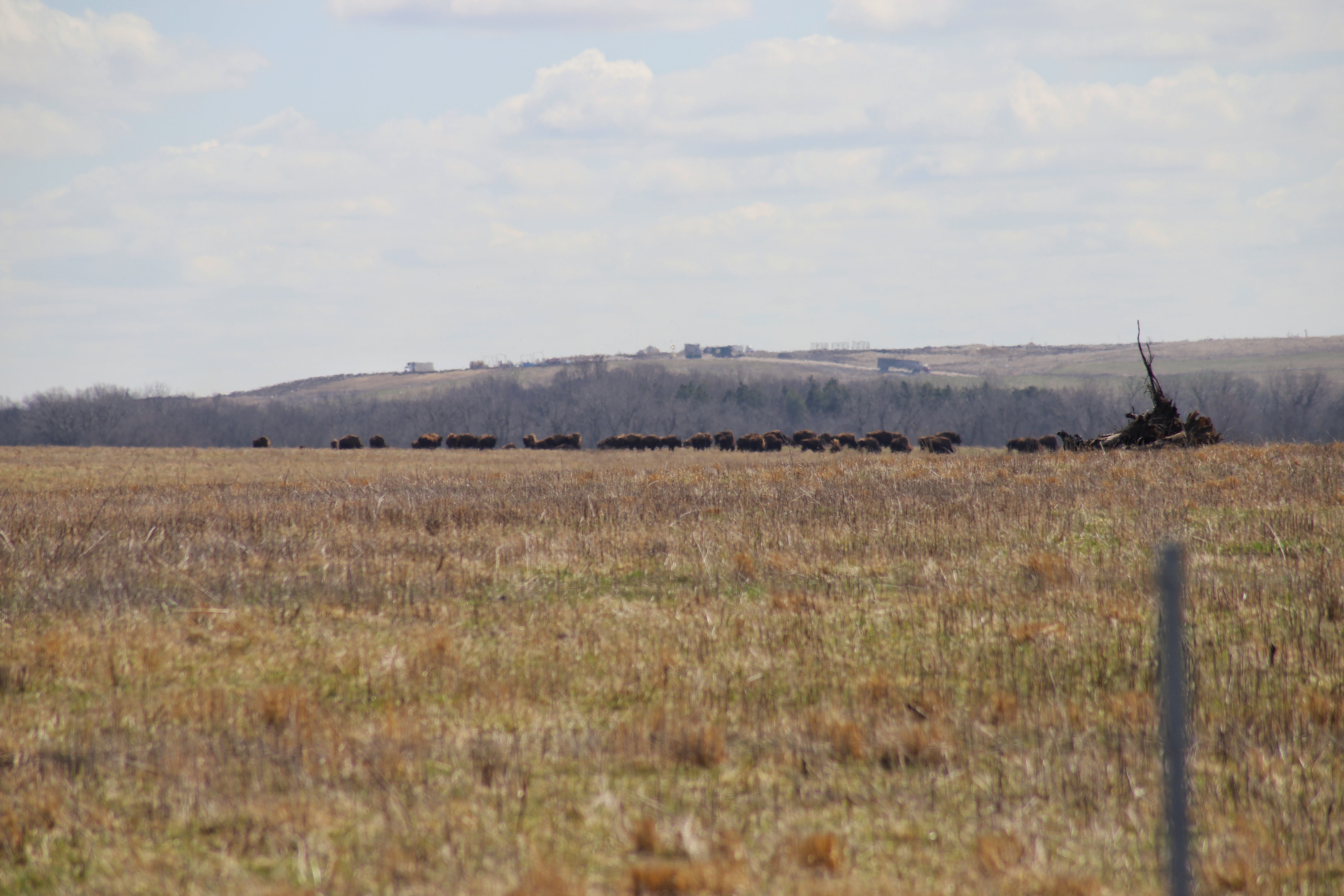 A herd of American Bison, introduced to Midewin National Tallgrass Prairie in 2015, graze while, in the distance, trucks drive to and from the Prairie View Landfill. Cam Rodriguez 14 East

The Bloomingdale 606 Trail is by far one of the most promising models of land reuse in modern times. Originally crafted as a makeshift path by urban explorers and transit junkies following the end of its use, the former freight rail tracks are now a polished, cohesive space that all Chicagoans can enjoy (though the trail has also served as a catalyst for gentrification in the area).

The “Outerbelt” trails, an almost 200-mile loop of green space that encircles the city, are a remarkable act of forest, prairie and marsh preservation. The Montrose Point Bird Sanctuary, at the tip of Montrose Beach, was a man-made space as well; a former Army barrack site that was turned into a birdwatcher’s dream come true in the 1990s.

These acts of human intervention — destruction, creation, reuse and, most importantly, remediation — stand as an example of the power that we as humans wield over the spaces around us. The kind of conservation in Illinois that created vast prairies and tumbling waterfalls is a powerful tool to preserve precious pieces of history. It’s one that was kickstarted by a moment of serendipity and good timing, but prolonged through a promise made to keep the wilderness accessible for years to come, whether it began as wilderness or not.

“It always makes me wonder,” Burns said. “What are we starting that will last into the future?”