A Weekend of Protests, Police and Calls for Justic...

The Wilderness Within Our Homes

A Weekend of Protests, Police and Calls for Justice in Chicago 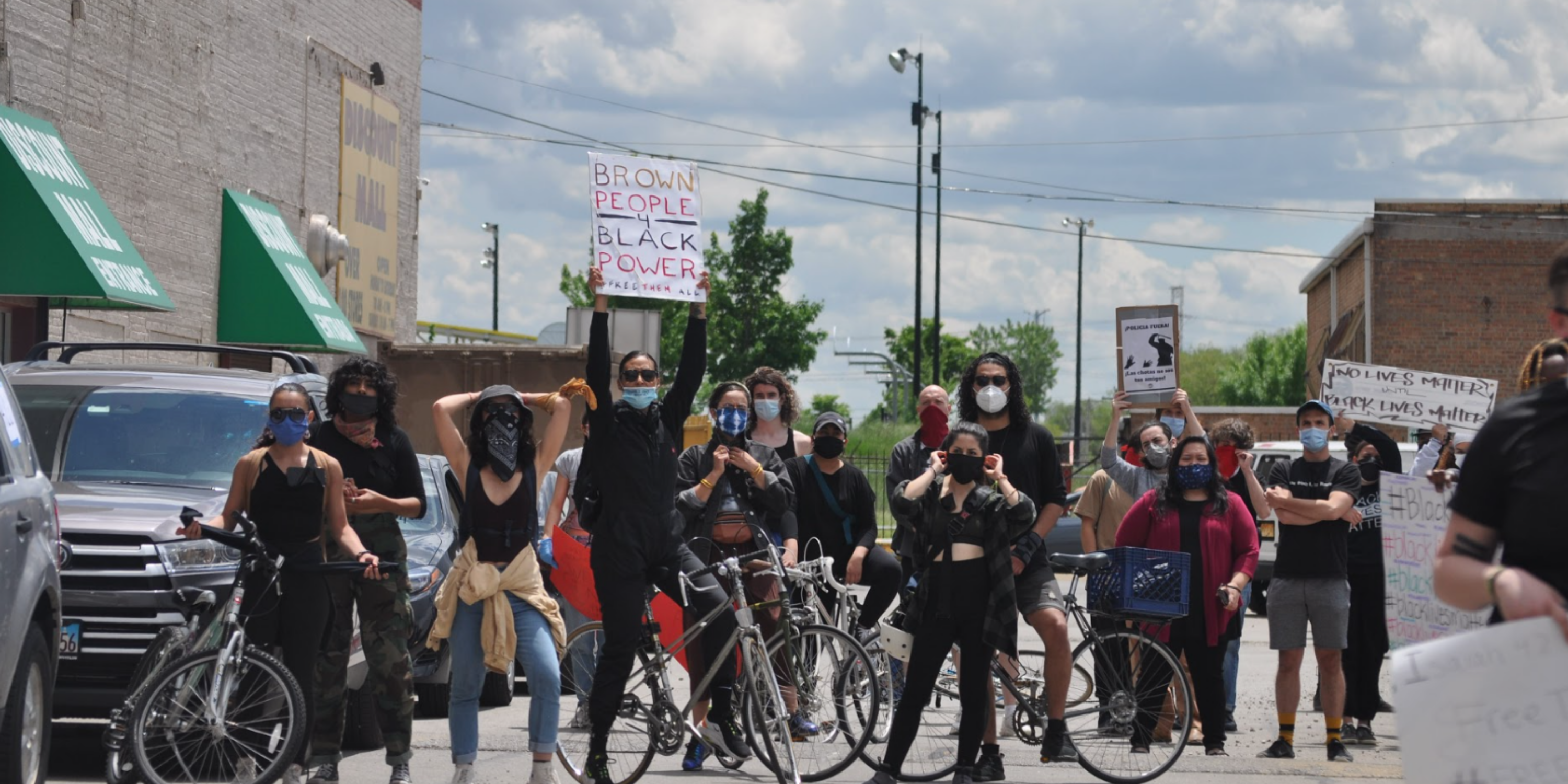 On May 25, Minneapolis police arrested a man named George Floyd, a 46-year-old Black man, after a deli employee called 911, accusing Floyd of purchasing cigarettes with a counterfeit $20 bill.

The events over the course of the following 17 minutes would impact the nation for days to come and, perhaps, well into the future.

In video footage captured by bystanders and nearby security cameras, police officer Derek Chauvin is seen pinning Floyd to the ground and proceeding to kneel on Floyd’s neck with his knee for a total of 8 minutes and 46 seconds, according to the criminal complaint filed against him. Chauvin continued to kneel onto Floyd’s neck even as he said he couldn’t breathe, after Floyd lost consciousness and for a full minute after paramedics arrived.

After the video started circulating more widely, protests began in Minneapolis on Tuesday. Derek Chauvin, as well as the three other officers involved in the incident, were fired from the Minneapolis Police Department that day. By Friday, Chauvin had been arrested and charged with third-degree murder and manslaughter, and protests began erupting across the nation. He has not entered a plea yet.

In Chicago, protests for George Floyd led in part by #BlackLivesMatter (BLM) intersected with pre-planned prison abolition protests on Saturday.

Troi Valles, a member of BLM Chicago and an organizer with the Chicago Alliance Against Racist and Political Repression (CAARPR), a chapter of the National Alliance Against Racist and Political Repression (NAARPR), said that there had already been a “Day of Protest” car caravan planned as a part of the organization’s call to #FreeThemAll, a larger anti-police brutality movement focused on “getting people out of prison.”

“We were planning on having this May 30 Day of Protest that we had been planning like two weeks out,” she said. “So the timing with George Floyd is actually happenstance. It’s actually like a coincidence. Originally, it was supposed to be a car caravan only.”

CAARPR, Valles said, has been organizing car caravans for the past couple of months as a way for people to protest and organize while practicing social distancing during the COVID-19 pandemic.

“When George Floyd happened earlier in the week, we kind of felt the energy coming off of [Floyd’s death] and we decided to pivot and do a few things, like change the name of our action,” Valles said.

By Saturday afternoon, protests that began Friday night had crescendoed in dozens of cities and suburban areas across the country.

Iris Graziano-Fleming, a student at Illinois State University and Chicago resident, attended CAARPR’s car caravan protest, starting off the day with a contingent of caravaners in Little Village at the Cook County Jail, which drove into Federal Plaza in downtown Chicago.

“I went to the protest by car and I feel like it was a very different experience that I had than the people who were on foot,” Graziano-Fleming said. “I experienced it as a lot of blocked off streets, raised bridges. I kind of felt trapped at times, like they were purposely trying to keep us in one area and that was a bit scary.”

Graziano-Fleming experienced something that many protestors saw Saturday as bridges downtown at the Chicago River were lifted in an attempt to curb protests, followed by a 9 p.m. curfew announced by Mayor Lori Lightfoot on Saturday night, giving those downtown just over 30 minutes to leave the area. By that point, protests and police responses had escalated. Squad cars were set aflame and looting began on Michigan Avenue, as did arrests of protestors.

Those in the car caravan spent hours weaving in and around the intensifying scene downtown as bridge openings and street closures made an exit more difficult.

“I always felt safe knowing that I could just chill in my car, but I was worried for the people who didn’t have a place like that,” Graziano-Fleming said. “I opened up my car to other people, girls were charging their phones, and helping them find their friends. It was kind of like a community of people coming together.”

Other protesters, like rising senior at Lindblom Math and Science Academy and community organizer Essence Gatheright, attended by foot. She began at Federal Plaza, circling the area before walking toward Trump Tower. At this point, Gatheright said there was a larger police presence than earlier in the protest and some streets were barricaded. The crowd began to separate without a clear direction.

“The groups were no longer together, it was getting kind of weird … People were everywhere, at first it was one to two large groups, but now we’re talking people in all different directions. I didn’t know what to do,” Gatheright said. She, her sister and her sister’s friend decided to go home; however, every CTA train stop they approached was closed. “Once I realized we were trapped down there I realized, I’m like, ‘It’s bigger than me now because other people are trapped down here, and I know I have friends trapped down here so I wanted to make sure they got home safely.”

“I work at [Chicago Freedom School] and was like, ‘Hey could you open up the space, I think we need to set something up, like I’m down here and I can’t get home. I don’t even know what to do,” Gatheright said. The organization, located in the South Loop, opened its doors to some protesters stranded, allowing them a space to eat, charge their phones and figure out how to get home.

Since Saturday, there has been criticism nationwide of the looting and property damage happening at the same time as peaceful protests, as well as criticism of law enforcement’s use of violence at protests.

“I guess to speak for CAARPR, we don’t condone looting, we don’t condone any kind of rioting. But we do understand why people feel that way, you know, and where that energy is coming from,” Valles said. “I would say it for myself personally, I’m critical of people who comment on the violence of people destroying property, but then have nothing to say about the violence of the police that they carry out every day. It just seems like there’s a bit of a double standard, but that’s for me personally.”

“I applaud the vast majority of the individuals who came here to make true and lasting change peacefully,” Lightfoot said. “But to the rest of you, I’m here to call you out for your recklessness and for your obscene disrespect to the righteous cause you are trying to hijack.”

The ensuing demonstrations around the country on Saturday and into Sunday in some places seemed to all but overpower more recent events of national safety: the ongoing threat of COVID-19.

Protestors in Chicago, although many are notably wearing masks, are accepting a heightened risk of exposure to COVID-19 by gathering in large crowds on foot where it seems difficult, if not impossible, to social distance.

City officials have decided to move forward with Phase 3 of Chicago’s reopening plan after the protests and unrest this weekend and planned protests throughout the week. Health officials are urging protestors to quarantine for 14 days.

Protests continued throughout Sunday and into Monday evening, resulting in over 1,000 arrests, including almost 700 on Sunday alone, many of which were for looting on the South and West sides.

As the week presses on and protests continue, some still feel that the need for action is high as long as police brutality continues.

“I have been so heartbroken of the news lately and I was just thinking of all the times in history that this has happened,” Graziano-Fleming said.  “I’ve learned about it, and how regretful I would feel if I wasn’t a part of trying to make the change.”

For those who cannot accept the risk of COVID-19 exposure to protest in person, organizations like CAARPR are providing “at-home” resources to support the movement remotely.

“We actually have an at home toolkit for folks. And that toolkit is very social media focused. So we have like sample tweets so that people can copy and tweet out, you know, hashtags, so people can help us go viral. Retweeting all this, of course, and liking our stuff helps,” Valles said.

Valles also mentioned that calling the governor and asking for pardons for those CAARPR considers wrongfully convicted (such as Gerald Reed, whose case CAARPR specifically advocates for) and calling for emergency pardons of torture survivors are also easy at-home actions.

At some point, the protests are likely to end, and people will, in some capacity, have to return to navigating the already uncertain and unpredictable world in the age of COVID-19. Valles says that sustained action is key to seeing the demands of these protests through.

Getting behind the Civilian Police Accountability Council (CPAC) is one major way Chicagoans can see this through, according to Valles.

Before the protesting, CPAC had over 60,000 supporters by Valles’ estimates and had the support of 19 aldermen in the city. She said that supporting CPAC and organizations helping fight for it could be a potential path towards more inclusive, community-based ways to deal with policing and conflict resolution.

“I hope people get involved. It’s great that people are taking to the streets,” Valles said. “But I hope that people sign up with, if not us, BLM or someone else that they feel moved to support and start going to meetings, start really getting involved, and again, in a more systematic way.”