A Weekend of Protests, Police .. 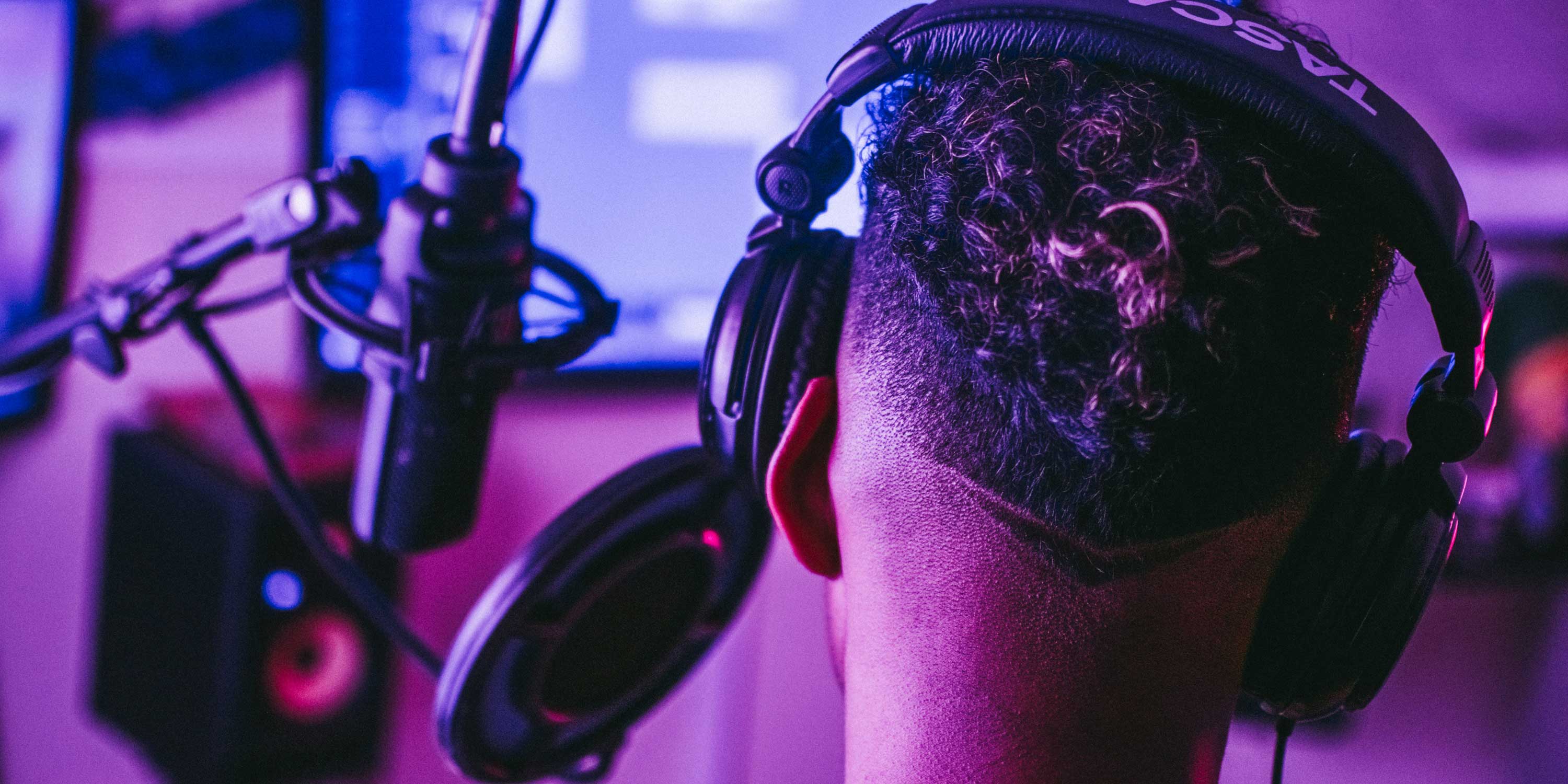 James Webb started providing fledgling Chicago-area standup comedians a showcase eight years ago to try to keep them from fleeing to the coasts for bigger venues. But his real brainstorm was a comedy show podcast network he began to develop — two-and-a-half years before the coronavirus pandemic — in his Roscoe Village house basement.

Webb, 34, let his in-person showcase in Wicker Park, called Stand Up Stand Up, come to an end so he could focus on the podcast network, People of Comedy, which has hosted at least 30 shows throughout its run so far, since its January 2019 launch.

“This central hub for standups to do podcast didn’t really exist,” said Webb, who built his podcast studio in a house he rents in Roscoe Village.

“Everyone was kind of disjointed, would start something up, and fail at it,” Webb said. “It’s hard to put a production together and people don’t really have the time. This is picking up all the slack from the old days.”

Webb is hiring three producers. Before the pandemic, there were plans to open a second podcast studio at The Lincoln Lodge, a standup club in Lincoln Park. These plans are currently at a standstill.

The People of Comedy network consists of dozens of established local stand-up comics hosting their own podcasts.

“People of Comedy network is the hub for most of the shows recorded in here,” said Webb, who quit his day job (a “boring, do-nothing job,” he said) to set up the studio and launch the network.

“We have podcasts for parents, the Latino community, the Black community and Black nerds, a podcast for Millennials and Gen X’ers,” Webb said. “There’s no end to the range of audiences and shows we have going on here.”

Jarrell Barnes, 28, host of Hood Nerds, worked on the podcast with fellow comedian Ty Riggs before Webb contacted them to be part of the podcast network.

As one of the debuting shows on the network, Hood Nerds has become one of the network’s biggest shows, with 400 downloads and an average of 2,000 views when streamed on Facebook, according to Barnes.

“It was a better way to push the content with live streams and much better audio with a studio,” Riggs said. “We didn’t have [a studio]. We were just doing it in an apartment.”

Local Chicago Stand Up: The Problem

Webb’s prescience stems from over 15 years of fascination and employment with Chicago standup, its rich history and the city’s need to keep talented, fledgling comics from fleeing to the coasts.

Chicago — known as the home of Second City, the birthplace of Saturday Night Live’s original stars Gilda Radner, Dan Aykroyd, John Belushi, and a host of others who followed — had blossomed into a standup comedian’s dream in the mid-2010s, with showcases every night.

Lia Berman, 40, host of Parental Advisory, was among the first comics to find a solution to strengthen the comedy scene in Chicago.

“A lot of people go to New York or California after they get their chops in Chicago. James and I were asking why they can’t stay here,” she said. “What could keep them here? What about a podcast studio? A place that could be a center for all comedians to put their stuff out.”

Abi Sanchez, 42, host of Legal Aliens, who has performed standup comedy for 10 years in Chicago, never took the bait – but he understands it.

“Chicago doesn’t have that [comedy club] industry like LA or New York,” he said. “You might get some commercials, or Chicago Fire style of shows, but I feel like people think the goal is to go out and be seen in places like New York.”

Barnes, of Hood Nerds, after three years of being a Chicago comic, moved to the Bronx for three years for different opportunities in that scene, and LA for less than a year, before returning to Chicago.

“New York is the premier stand-up scene,” he said. “You have these historical comedy clubs and there would be multiple times I would do a show and Andrew Schultz, or Chris Rock would walk in, and it’s great for the standup and the audience attending.

“It was a great experience and it taught me a lot,” Barnes said. “Everybody is always being entertained, so when you get on that stage, you have to be funny; can you make people laugh? That’s what New York instills in you.”

But there’s a downside.

New York and Los Angeles are such a comic magnet, it can be tough to get spots on stage.

Sanchez, of Legal Aliens, repeatedly has expressed reservations for up-and-coming comics, moving just for the opportunity without any steady plans.

“You don’t want to go LA where it’s predatory, [where] these jagoffs who will assault you in their office to get a bit part in the movie,” Webb said. “Or New York where you will get buried under 500 names.”

“You might see Neil Brennan, Chris Rock or Dave Chappelle — all there at a late-night Saturday,” said. “In Chicago, we don’t have that, so there’s a lot more freedom for creativity and different venues to be different.”

“In LA, if you’re not famous or up-and-coming you might be able to get on stage once a month,” he said. “In Chicago, you’re able to at least get 15 minutes on stage every night and be able to create your own star power.”

People of Comedy: All In

The People of Comedy podcast unwittingly gave local comics a crucial head start in honing their skills in reaching an audience online.

“As a comedian, you don’t want to present your material online and burn through your content,” Sanchez said. “For the podcast, it’s getting our name out there and building a fan base, see a different side of us. It’s an outlet to build apart from standup.” 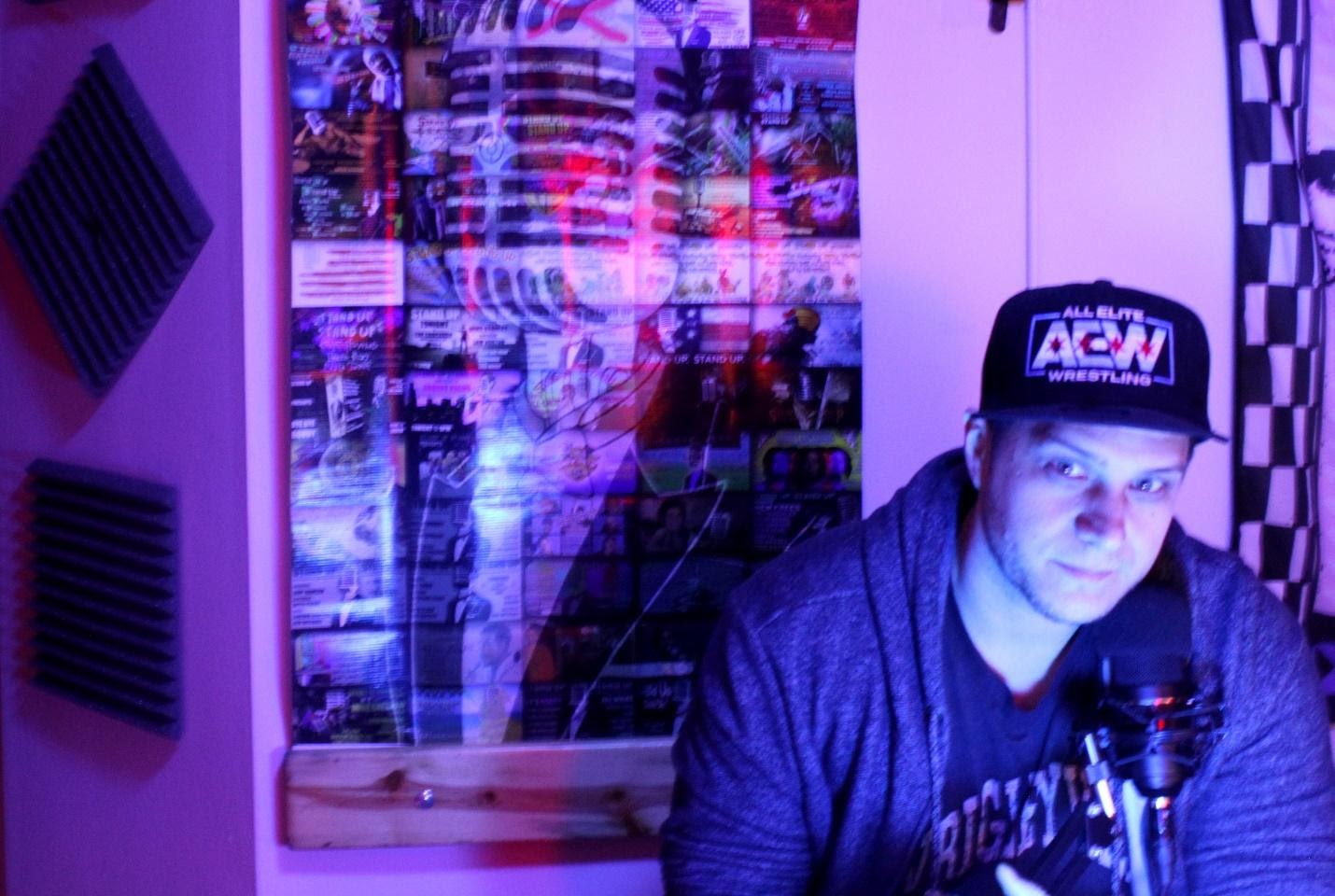 Webb’s studio is shrined with decoration from his past and present. The background behind his seat is a poster of every single promo picture for all the showcases of Stand Up Stand Up his first year. Gianfranco Ocampo, 14 East.

Now that Chicago’s comedy clubs are shuttered, and their future business unknown, Webb is confident of the online industry that comics can produce at the local level.

“A bunch of people are putting up sketches outside of my network, and doing things online. There are all these Zoom shows, and love them or hate them, it is the closest thing to stand-up comedy. Adaptation is happening and it’s fun to watch.”

But he still mourns giving up his live talent showcase.

“I was very sad when the show left,” he said of exiting Stand Up Stand Up. “It’s really like your kid. You watch it, you have this beautiful thing and the world loves it. All that history, it’s one of the most beautiful things you can do if you pull it off. It hurts,” he said.

Yet the show must go on – and the podcast network’s show hosts are enthused.

Barnes’ goal with Hood Nerds is to raise its status as a media giant, similar to The Nerdist.

Berman, mom of a three-year-old son, has also committed to the podcast and the network’s success.

“I want to take this to the top,” she said. “I really want to put all my eggs in this basket. These real conversations are what people want to hear.

“I’m excited for what this podcast has in the future,” Berman said. “I know this is going to be a slow roll. I know I’ll have to be patient. But I truly believe in this cause.”

Hood Nerds and Parental Advisory tackle niche topics, with the goal to continuously grow an audience.

“We come in with an attitude,” Barnes said. “Nerds are nerds, where people will try to classify them into a certain group. But we all come from certain kinds of neighborhoods that are tougher from most. But we still love nerd culture.”

Rodescu Hopkins 29, co-host of the Hood Nerds, said, “So, our attitudes and demeanor with each other, we’ll make fun of each other and jump on somebody where that hood version of us comes out. It’s all in a fun, comical way.

“Even with our guests and people who comment on our show, we sometimes have to censor them cause they can get too rowdy,” Hopkins said. “I compare it to Opie and Anthony. Sometimes it can get too ratchet.”

All come from urban neighborhoods, and Barnes believes that their experiences and interaction with nerd culture will remain a constant for the show.

“The main thing is to attract ‘hood nerds,’” he said. “People who come from urban environments and want to express their love and joy of anime, TV and games. It also gives perspective to people who weren’t from the hood who also never got to hear commentary from that perspective.”

Berman started the podcast Parental Advisory as one of the network’s debut shows.

“Jewish mother of three years to a beautiful baby boy, it’s about what it’s like to be a parent in entertainment, but more broadly what parenting is,” she said.

“It’s for parents who are like, ‘My life doesn’t look like the ones on Instagram with the perfect mom and dad in their perfect home,” Berman said. “I clean up puke at home with a T-shirt. It’s a very real take on parenting.”

Alongside podcasting and parenting, Berman runs the open mic event at the Logan Lounge every Monday and works a full-time job as a finance assistant.

“People just want to get a laugh in every now and then,” she said. “It’s a crazy world and we all work very hard and we take a lot of things very seriously. Sometimes it’s nice to joke about it. Not take parenting so seriously.”

“I want People of Comedy to be a consistent, entrusted name in content production,” he said. “Underneath all of this, I have a drive to be the best at everything.

“People of Comedy better be the best network, or else I’m not doing this right,” Webb said. “I want to be the most trusted source for podcasting, and if someone signs into the network, people know it’s a big deal.”