Black Women, Billboard Charts and TikTok: The Future Of The Music Industry 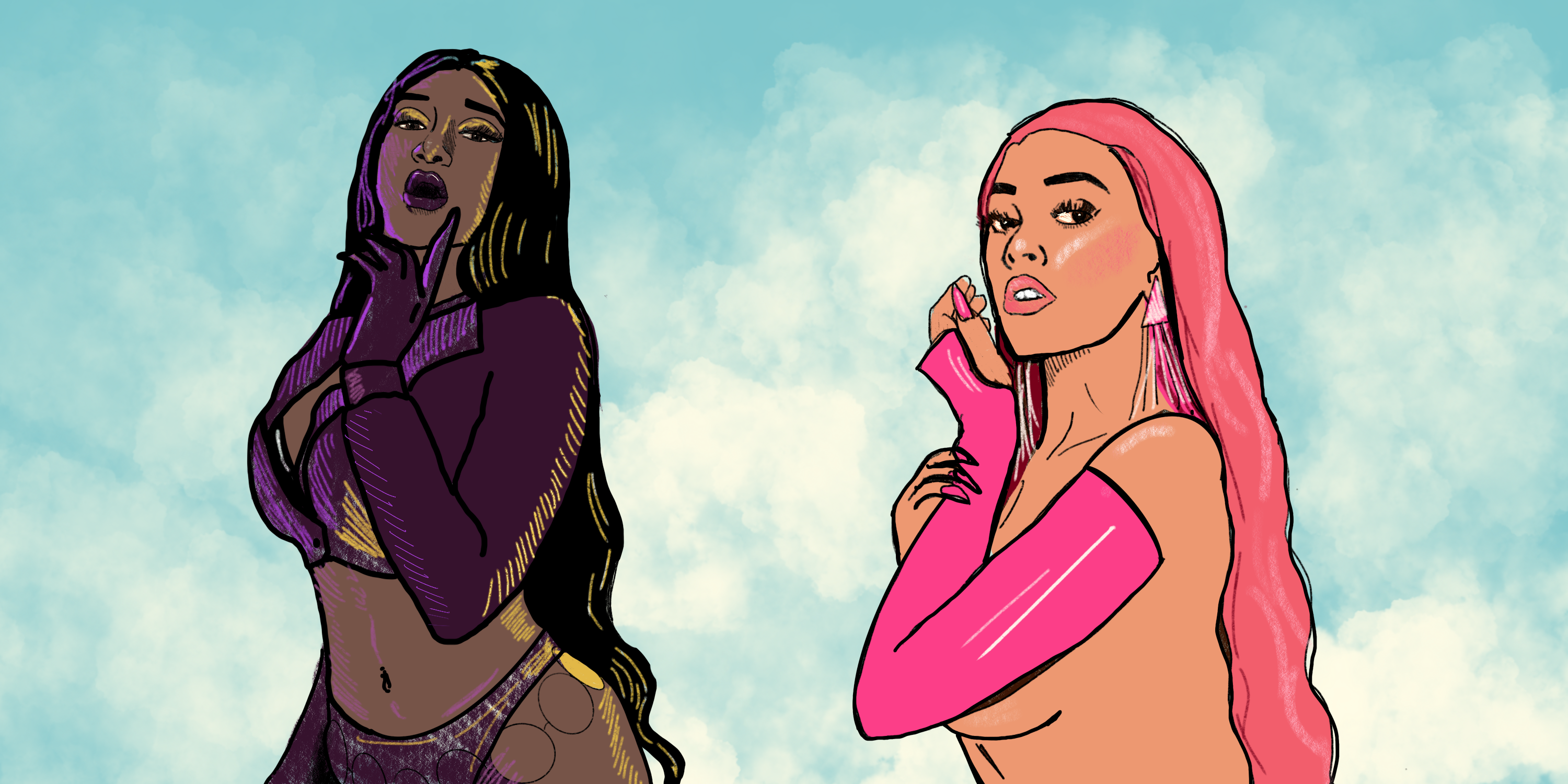 The Billboard Music Charts have tracked the most popular music since the 1940s. However, The Hot 100 chart is morethan just a ranking. It’s an archive of data that reveals changes in gender representation, the evolution of genres and ultimately reflects the music industry at large. In May 2020, the charts revealed a transformative moment — the first time four Black women solo artists held the top two spots. Doja Cat’s “Say So” featuring Nicki Minaj charted at number one, and Megan Thee Stallion’s “Savage” featuring Beyonce came in a close second. As time went on, the songs eventually swapped places, but regardless of who was number one, their placement at the top revealed a pivotal turn in music history: more people are listening to Black women rappers.

What started out as an underground culture in the Bronx in the 1970s is now one of the most mainstream genres that stays topping the charts. But throughout rap’s evolution, it has been an uphill battle for women rappers to be represented. Roxanne Shanté is considered a pioneer of hip hop and one of the first women rappers. At only 15, her song “Roxanne’s Revenge” was aired on a morning radio show in New York. As rap gained popularity, music companies didn’t know what to think of it, assuming it was just a fad. “They was like, listen; this is not going to be around for the next 10 years, so try to get everything you can out of it now,” Shanté told NPR.

They were wrong. Rap steadily increased in popularity and in 2018 ultimately surpassed rock as the most popular music genre, with almost a quarter of all tracks consumed rap songs. Yet as rap became more popular, there was still a disproportionate amount of women rappers.

But just because there were less of them, does not mean they left any less of a mark. Take MC Lyte. Her 1988 album, Lyte as a Rock, is critically acclaimed and considered the first full album by a woman rapper. She went on to have seven songs jump on the Hot 100 — her all time high was number 6 with “Eyes on This.” In 1994, rap duo Salt-N-Pepa peaked at number three with “Whatta Man.” But as Rolling Stones put it, “comparisons can lead to competition.” Foxy Brown and Lil’ Kim went to the same high school in Brooklyn, both released their solo debuts in November 1996 and were well known for their proud hypersexuality, which ultimately created a feud between the two. Hip-hop culture naturally comes with competition. What also arose were different archetypesfor rappers — queens, spirituals, jezebels, good girls and bad b—es. These different titles empowered some, boxed others in, but ultimately “allowed” more women rappers to be in the mainstream.

Despite some strong moments, women-centered rap went through a drought until the 2010s. Then Nicki Minaj showed up, quenching our thirst and drowning the charts. It was nearly impossible to compete with her and, to this day, her work is held as a high standard. Minaj has one of the best chart records of all time and has been cited to be one of the most influential women rappers. She currently ties with Elvis Presley at 4th for the most Hot 100 hits of all time. With Drake in first, the TV show Glee cast at second, Lil Wayne in third and Kanye West at fifth, Minaj is again the only woman.

However, soon enough Cardi B made chart history with her song “Bodak Yellow” — becoming the second woman rapper to hit number one without a feature — Lauryn Hill is the first in 1988 with “Doo Wop (That Thang).” Unlike their male contemporaries, take Travis Scott and Drake, who can play nice and even collaborate on songs, the two women rappers were framed to be competitors. Of course, Cardi B throwing her shoe at Nicki Minaj didn’t help —  but it highlighted how the industry can perpetuate women to view each other as competition instead of supportive peers.

Regardless of the year and the increase in prominent women rappers, misogyny in the music industry remains. In March, Megan Thee Stallion sued her own label, 1501 Certified Entertainment, and requested to terminate her contract due to fraud and negligent misrepresentation. “I will stand up for myself and won’t allow two men to bully me, I am NO ONES PROPERTY,” she wrote on Instagram in regards to the lawsuit. Thee Stallion also had a restraining order against 1501 because her management wouldn’t let her release her EP, Suga, which included “Savage” on the tracklist, that would go on to make history.

Both Megan Thee Stallion and Doja Cat have something in common: they’re sexy, talented and not afraid to show it. Between Doja Cat’s “Go To Town” and Megan Thee Stallion’s “Pimpin,” it was blatantly clear they are rapping about receiving pleasure. Thee Stallion argues that women should be able to rap just like men without judgment. “A man can be as mediocre as he wants to be but still be praised,” she told BET. Because of the music industry’s history of objectifying women, it might appear that these women have no choice, and must be hypersexual to gain attention. Lana Del Ray certainly had her fair share of words on this, and received backlash for her letter on Instagram titled “Question for the Culture.” However, these women are hypersexual because they want to be hypersexual and are writing what Noisey calls “a new feminist canon.”

They’re also both at the start of their career — Doja Cat is 24, and Megan Thee Stallion is 25. Doja Cat came to the limelight unexpectedly in 2018 with her song, “Moo!” that she wrote about cows and filmed in less than 13 hours. Her strong social media presence has both allowed her to gain such a wide audience and has backfired, being “canceled” by the internet at least twice.

Just days after she got her first number one on Billboard, #dojacatisoverparty started to trend on Twitter, claimingthat she was regularly in chat rooms with racists and white supremacists. She later went on Instagram Live, one of her favorite hobbies which solidified her online presence, to debunk the rumors that were spreading about her.

Doja Cat’s Twitter reveals her silly and sometimes crude sense of humor, breaking the proper stereotype of women celebrities. Between “Moo!” and “Say So” she has released two albums with RCA Records.

Megan Thee Stallion started her career freestyling on YouTube cyphers, taking after her late mother, Holly Thomas, who was also a rapper and her manager. Thee Stallion stays true to her roots and has brought that southern rap sound back, reminiscent of her favorite rap group, UGK. Although her past two albums received positive press, she became a viral name over the summer with her song and movement, “Hot Girl Summer” featuring Nicki Minaj.

Nicki Minaj and Megan Thee Stallion both tweeted about their thoughts on being a part of music history.

Man, I can’t believe I’m lucky enough to be a part of this kind of history. I love all the girls involved. It just feels like an epic moment to witness & be a part of @ the same damn time. ♥️😘🦄 https://t.co/RSH9GIvMnn

“Savage” and “Say So” were slowly gaining attention until the app TikTok catalyzed their popularity. TikTok is a somewhat new social media platform that allows users to post 15- to 60-second videos and choose from millions of different songs and audio clips. A TikTok trend is to choreograph a dance within that time frame to a specific song. Some of the dances go viral, and this was the case for Doja Cat and Megan Thee Stallion. Vulture even calls the “Savage” dance more infectious than just the song itself. In fact, the “Say So” dance was so infectious that Doja Cat ended up incorporating it into her music video, inviting the fan and creator of the dance, Haley Sharpe, to be in it.

TikTok has quickly become a platform for both fans and music labels to find new artists, the prototype being Lil Nas X. After sharing his song “Old Town Road” on Instagram and Twitter, a fan had uploaded it to TikTok. As the song blew up, record labels reached out to Lil Nas X and fiercely bid to sign him. Although Doja Cat and Megan Thee Stallion already had contracts, TikTok helped them reach the top of Billboard. The catch is that the number of times a song is played on TikTok does not directly get counted as a stream, because TikTok is not a streaming service. This is where copyright law in the music industry gets murky. TikTok signs licensing deals with TuneCore, a rights holder in the industry, and then pays them to use their music catalog. Ideally, that money should trickle back to the artists. This doesn’t always happen, especially in the case where an artist is unsigned. What likely happens is that people who like the 15 seconds of the song on TikTok, go listen to it on other streaming services.

Because Doja Cat and Megan Thee Stallion have already established themselves, TikTok was their diving board into a whole new pool of listeners. Unfortunately, for smaller artists, TikTok can be a whirlpool — fighting the stream of copyright law. The DMCA, or the Digital Millennium Copyright Act of 1998, made copyright reports fall onto the users, not the platforms themselves. As long as TikTok tells its users not to commit copyright infringement, they’re in the clear and it is no longer their responsibility. So without any legal backing, smaller artists compromise and accept free exposure of their song.

As the way music consumption changed, then so did the way the Billboard charts are calculated. Billboard collects its information from the Broadcast Data System and decides the ranking of the songs based on radio airplay, digital downloads, streaming activity and single sales. In 2007, Billboard began to include digital streams and counted YouTube video streams in 2013.

Once music became free, easily accessible and limitless in downloads (thanks, Napster), the music industry’s system had to be remolded. But now, instead of just radio hosts spoon-feeding us what songs and which artists to listen to, we can find a million more songs at our fingertips. The audience has more control, and in 2020, the audience is listeningto women rappers.

TikTok has recently signed short-term licensing deals with the major labels. The app in the future may strike bigger deals and then may be considered a streaming platform. In the next few years, it is likely that Billboard will begin to include TikTok video plays into their methodology.

The music industry has evolved rapidly since its beginnings and has become interwoven with culture and history. The Billboard Charts have been an essential tool in tracking these changes. Since the Hot 100’s start in 1958, the charts have traced the evolution of genres, technological influences and representation of race and gender in the music industry. As the rap genre grew from underground to mainstream, it has had its conflicts with women MCs. At the start of this new decade, we have seen a transformative event happen to take place on the charts. Black women rappers are finally sitting on the Chart’s number one throne, together. And that is pretty savage, if I say so.