What We Saw at #DecolonizeZhig..

A Look Back at Illinois’ Reopening Process

Why is Animal Crossing: New Ho..

A Look Back at Illinois’ Reopening Process 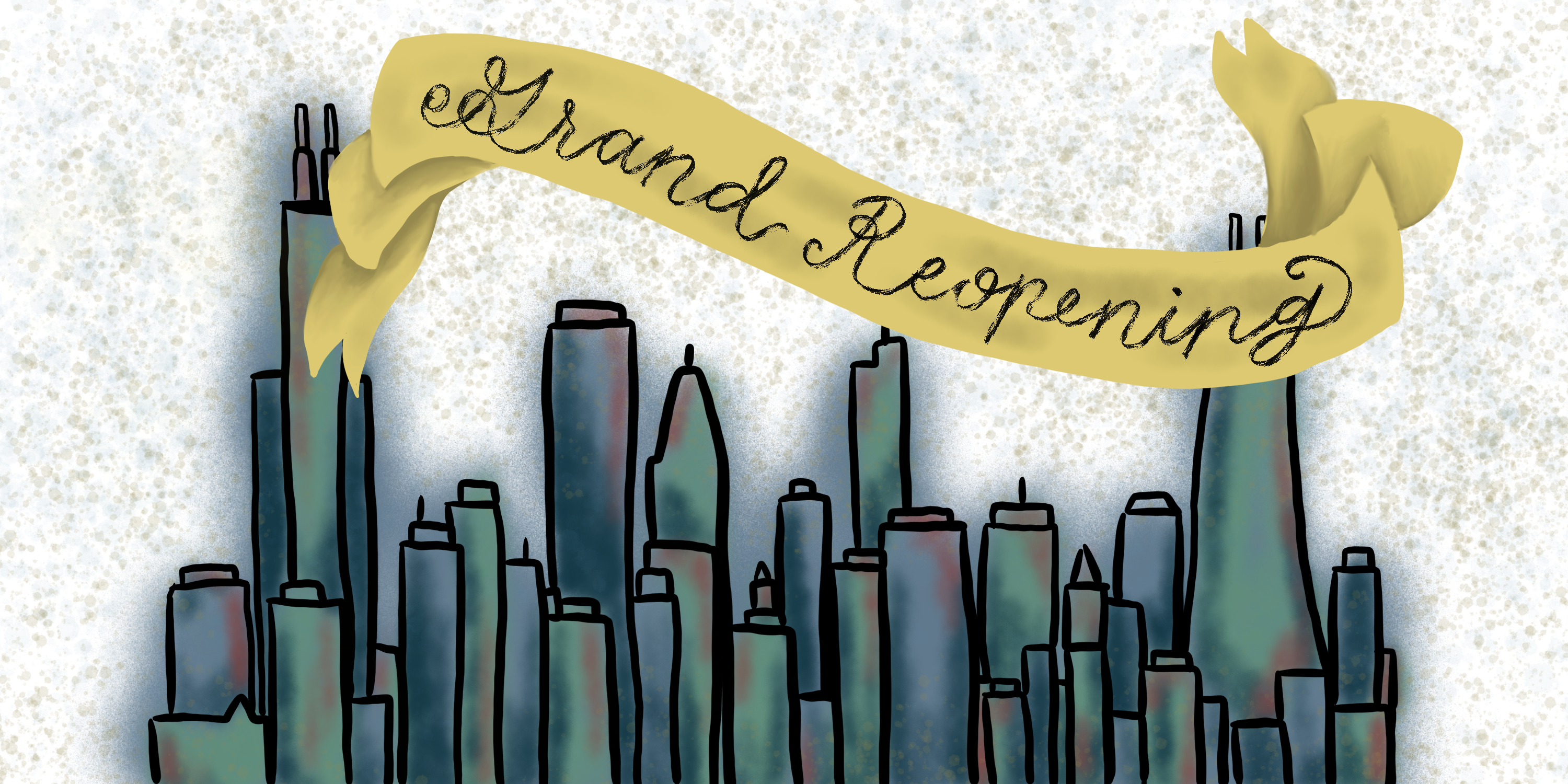 14 East contributor Abbas Dahodwala spoke with heath care professionals about where the state of Illinois is headed in its reopening plan.

At the beginning of the coronavirus pandemic, major cities like New York, Chicago, Los Angeles and Seattle were hit hard and undertook stringent lockdown measures. The focus at the start was to “bend the curve” with extreme social distancing measures, in order to keep the nation’s hospitals from being immediately overwhelmed.

However, as Chicago has moved into the fourth phase of reopening, allowing for non-essential businesses and restaurants to operate, the United States remains entrenched in the pandemic.

With Illinois at phase four for the foreseeable future, health care and public health professionals have highlighted the successes Chicago has had in bringing COVID-19 cases down while enforcing social distancing.

Chicago has done a good job enforcing the social distancing policies as well, even as it is difficult to ensure people are following them.

“There are only so many resources that the city has, so people really have to take that responsibility to do the right thing,” Lin said.

“There are only so many resources that the city has, so people really have to take that responsibility to do the right thing,” Lin said.

A key resource that has been in high demand throughout the pandemic is personal protective equipment or PPE. Dr. Alfredo Mena Lora, a clinical assistant professor at the University of Illinois and the Medical Director of Infection Control at St. Anthony Hospital in Little Village, said that while large swaths of the country  have struggled  with PPE, Chicago had a better time due to an existing stockpile.

Even now — four to five months in, Mena Lora stresses — there are still shortages in PPE. The need for better coordination throughout the country is an issue that Mena Lora believes may have helped the United States face the pandemic early on. Even now as Chicago has managed to stay steady, the hotspots have an exigency for supplies.

“In some future pandemic, sharing of resources is probably something as a society we can do better,” he said. “Whether it is ventilators or the ability to test, there are certainly discrepancies not just within a city but  within the country that could be more easily mitigated.”

In preparation for the birth of his child, Mena Lora went to Ohio to be with his wife. The hospital in Ohio was well-stocked with resources because of fewer cases. 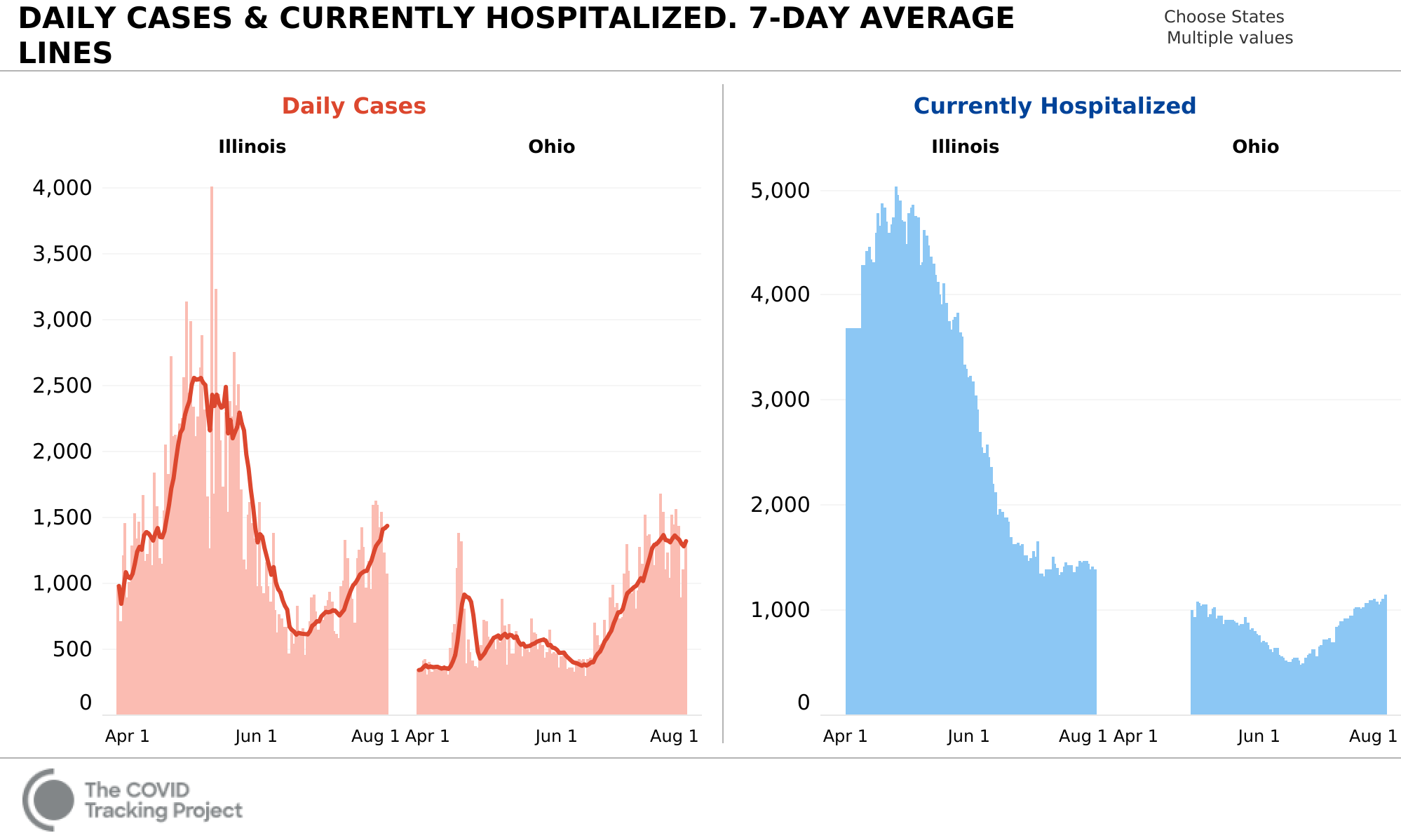 A comparison of state cases and hospitalizations between Illinois and Ohio, as of July 28. Data courtesy of The COVID Tracking Project at the Atlantic.

Today we are seeing that Florida and other areas of the United States are dealing with significant cases, while the earlier-hit places like Chicago and New York are not seeing this, he said. A better system of sharing of supplies throughout the nation could help deal with the different levels of outbreak across the US, Mena Lora said.

“How to better coordinate and have some flexibility between places,” he said. “Not just in a city – in between neighborhoods or hospitals – but in a state or maybe even in the country.”

As of July 24, the Illinois Department of Public Health has shown 24,106 cases in nursing homes and long-term-care facilities in the state. Due to the heavy burden coronavirus has on older adults, many nursing homes have to undertake  strict social-distancing policies to prevent the spread of COVID-19 inside facilities.

Prentice Dixon, an administrator at Symphony California Garden Nursing and Rehabilitation Center in Little Village, went through some of the policies that are in place at his facility. There are still restrictions on guests. While no guests are allowed inside the facility, they are allowed to meet with family members within the facility grounds following screening of the guests to prevent any potential transmission.

Along with this, California Garden has Person Under Investigation, or PUI, units to monitor new patients for 14 days and weekly testing for residents. The only time residents are allowed outside the facility is for funerals. While the policies are at times tough on the residents, Dixon said that they are necessary to keep residents safe.

“We are trying to keep everyone safe,” he said. “To me just because the world is opening up we are still seeing a lot of other places spiking and doing other things, so in an environment like ours we are trying to prevent that from happening.”

Dixon said after the heavy burden of the virus, he is optimistic that the situation will stabilize moving forward.

“A lot of the policies and procedures we put in place have been there for a while,” he said. “I feel like the worst has passed for us.”

Despite the extreme toll the virus has had, there remains optimism that Chicago will be able to work through this regardless of available treatment. Mena Lora discussed some of the treatment research that has come up over the last few months.

Two options emphasized by Mena Lora were remdesivir and a study that found steroids to be somewhat effective in improving patient outcomes. However, even with these new findings, Mena Lora said these treatments are not cures, but in the case of remdesivir, it has been shown to decrease the length of hospital stays.

“Unlike giving penicillin for a bacterial infection, [remdesivir] really is not like that, it is not miraculous in any way,” he said. “That is really all we have.”

Treatment options are still just being introduced, but hospitals have more options now than at the beginning of the outbreak in Chicago. Public health measures and social distancing will hopefully prevent a similar situation to April, said Mena Lora. In addition, testing capabilities as well as protective protocols and procedures including masks and plexiglass in hospitals are present in larger capacities.

In a public health sense, the ability to have proper surveillance will allow the city and the state to identify increases. This permits flexibility in closing and reopening different segments of society including schools, Mena Lora said. Even now, as Chicago sees a slight increase in cases, Mayor Lightfoot made it clear that if incidence rates continue to climb we may see a shift back to phase three of the reopening plan.

Regardless, there is hope that the worst of the outbreak is behind us in Chicago due to the fact that the system is in place to deal with another rise before it rises to previous levels.

“I am fairly optimistic because when we look at the first wave, it was a big wave, it was mitigated, it was a long wave, it was flattened,” Mena Lora said. “We did not have all these early warning signs that we have now. If we see an uptick in infections we are going to be able to do something about it.”