Attachment Theory: What it is ..

Slow Train Coming: A Review of.. 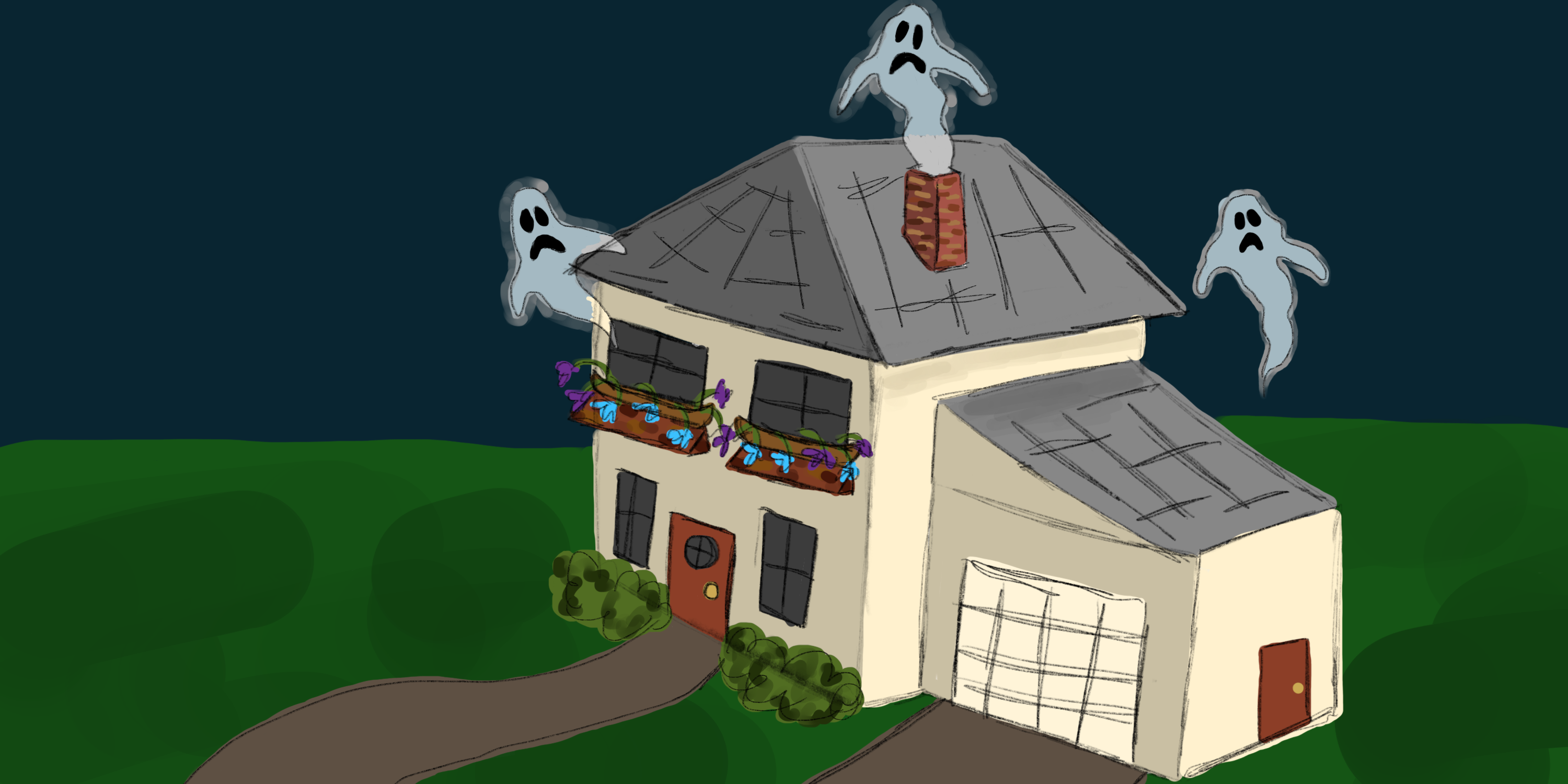 A writer returns to her childhood home during COVID-19 to reckon with her family ghosts.

My entire life, I have held what I considered to be a pretty healthy fear of the supernatural. Growing up in a relatively Christian area, demons were considered very much real and not something to be made fun of, and there were always hushed mutterings about the movie “The Exorcist,” because the real-life event that inspired it occurred in my hometown, St. Louis. My childhood home had a spooky, unfinished basement, but even eight-year-old me saw no red flags that led me to believe I had ever encountered a ghost — until we moved years later.

During the fall of my senior year of high school, my family and I moved houses. I was sad to leave the home I had known for the majority of my life, but my parents assured me that this new place was fresh and that I would love it, since it had recently been entirely gutted and redone. They tried to build my excitement by telling me that my room was in the newly finished basement and I would get the entire floor to myself.

Shortly after we moved in, things started getting a little spooky. Most nights, I would sit in the common area of the basement, awake until the wee hours of the morning working on homework.

The things I noticed initially were unusual but not the most alarming. Basement lights would often flicker, even though they were frequently replaced. I would often think I saw a woman cascading down the basement stairs and doors would sometimes drift open. Occasionally, I would walk to the stairwell or into a new room, and the second I entered, the light above me would go out. Panicked, I told my parents –– they assured me that it was a house with old bones and probably some loose wires.

The worst part about these nights, however, was a constant feeling that I was never alone.

The worst part about these nights, however, was a constant feeling that I was never alone.

“This is too weird,” I muttered under my breath.

Obviously going into any bathroom was out of the question at this point, so I resigned myself to just printing out my paper and going to bed. It’s important to note that our printer rested in my dad’s office in the basement. My dad’s office is a series of three desks arranged in a U-shape sitting on the carpet. However, none of the desks touch or are attached in any way.

As I went to staple my printed papers I heard a loud clunk as a drawer in the desk a few feet behind me fell open. I whipped around to see if anything could have caused the drawer to fly open, and seeing nothing, I walked forward to investigate. It was the drawer that was always locked and could not be opened ever without a key. Being a private investigator, my father made certain to never leave it unlocked. When I peered inside the drawer, I realized it was the drawer that held all of the family guns. This appeared to me as an obvious warning sign from some kind of spirit, and I immediately sprinted to my bedroom and locked the door.

The next day, I peppered my parents with questions. My father told me that an older couple previously lived in the house, and when they passed, left the home to their children, who chose to flip the house and put it on the market.

“I think the old man died in the hospital shortly after the old woman passed away in the house. Why?” He said unbothered.

Horrified, I always kept this in my mind, although as I started sleeping upstairs more, I began to think of it less and less.

Fast forward to March 2020. Faced with the global COVID-19 pandemic, I trekked home to spend a few weeks hunkered down with my parents in the family house. Many late, anxiety-riddled nights ensued, and so did what I can only describe as paranormal activity.

It started with the pacing. From a young age, I had memorized both of my parents’ footstep patterns, so when I heard them late at night in the hall, I could quickly hide my Nintendo DS under my pillow and pretend to be asleep. These were not their footsteps. I would lay awake at night and hear a series of soft, dainty steps make their way across the hall upstairs, back and forth between the bedroom and the kitchen. Occasionally I would hear those steps descend the stairwell.

“We live in a world where there are a lot of things we don’t have the answers to … We can’t always explain them,” said Martin. “I’m always skeptical at first, too.”

I asked both of my parents if they had developed a habit of pacing late at night: the answer was no. More and more, I heard the pacing start up late at night, and I would hear gentle footsteps come down the stairwell by my bedroom before heading back up the stairs, the floorboards creaking with each footfall. After some research, I found that people who live in haunted houses say this is often one of the most commonly found signs of a spirit in your home. Several sketchy-looking ghost blogs warned that new changes in the home or lifestyle could throw off a ghost, so I assumed that my sudden coming home and semi-permanent stay had somehow confused the spirit I sensed.

Although I had some weird experiences, I still doubted my own suspicions –– until I was “visited.” I doubted I could find any solid evidence online, particularly since the existence of ghosts is so widely debated and difficult to prove.

Things got even more strange one night when one night during quarantine, I awoke in the middle of the night. I’m still surprised by what happened, and I can understand how unbelievable it can sound to someone who was not there.

My bedroom was so cold that I could see my breath, and fog filled the room. I sat upright and as I turned my head, a mist in the shape of a woman was standing there. Just as soon as the mist formed, it dissipated, and the fog slowly drifted away as the room returned to a normal temperature. Frightened beyond belief, I sat up and called a friend I knew would be awake.

The following days, I researched every spare second I had. According to sources I found online what I had witnessed was an ecto-mist, or a ghost that appears more like a mist than a full-blown person— I was confident of it this time.

When I tried to describe my experience to my parents, they were hesitant to believe me, until our dog started randomly running to my bedroom door and barking in the hall like there was an intruder.

Whether you believe in spirits or not, many people still feel tied to those they lost for the rest of their lives.

I reached out to Donald Martin of Southern Paranormal to get an expert’s opinion. When Martin is not fulfilling his day job of being a firefighter, he heads to the most haunted areas of the South to try and find paranormal activity. Martin sets up devices to record for noises and interaction as he and his team of family and friends try to make contact with whatever spirits may lie there.

Martin described my experience as a residual haunting — a spirit that tends to be active around the same times.

Although I was sure that what I had experienced was very much real and not a dream, I asked Martin to address skepticism that others might have about the experience.

“We live in a world where there are a lot of things we don’t have the answers to … We can’t always explain them,” said Martin. “I’m always skeptical at first, too.”

“For our skeptics, a lot of times you have to see it for yourself. Come out with us sometime and see for yourself,” said Martin.

Once I had described all the aspects of seeing the ghost, Martin affirmed that several of the things I experienced were common signs of haunting, and pointers that what I had experienced was definitely more than an effect of living in a creepy old house. Temperature changes, fog or mist, and having a pet react to the same sounds are frequent signs of a possible ghost.

Friends oftentimes ask me if I’m frightened by living in a house with a spirit. I always say I’m a little frightened by the unknown, but I no longer think the spirit to be an angry one. She seems more confused by my visits than angered by them. Lately, she makes herself known by saying my name out loud, sometimes so loudly that people I’m speaking with on the phone can hear it, too.

I used to be terrified to live in a house that had a ghost. But I believe that at one point, this was her home, too. Some people want to expel their spirits, but she has not given me a reason to think her presence is a negative one. Whether you believe in spirits or not, many people still feel tied to those they lost for the rest of their lives.

Whether it be spirits or full-blown ghosts, the things people do and the lives they lived never really leave this world, and I find that kind of comforting in a weird way. Obviously, not every spirit is friendly or kind, but I like to think that ours walks around the house at night to make sure everything is okay and in place.