Reimagining Safety: A Conversation with Damon Will... 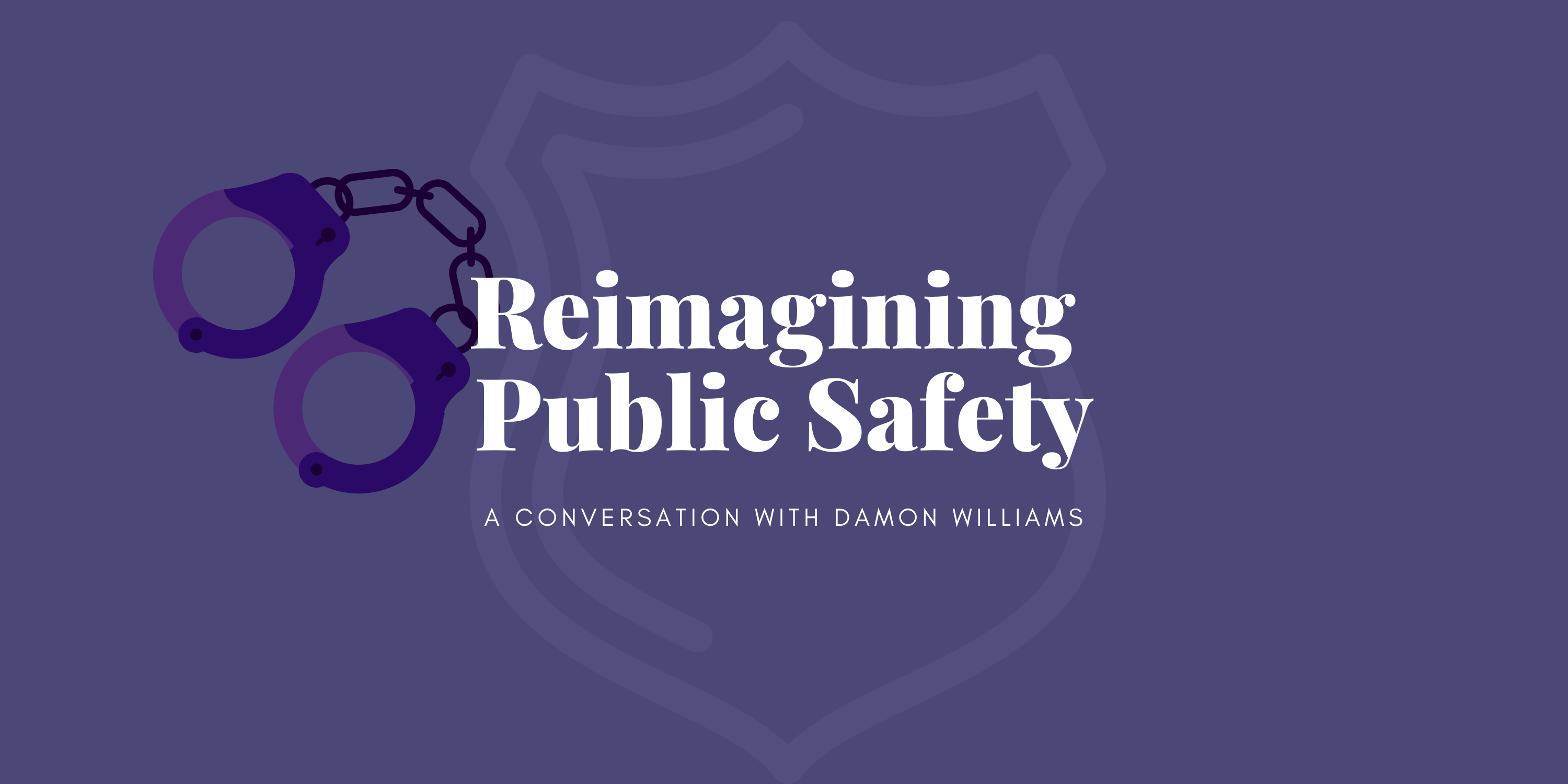 Movement builder, cultural worker, founder of the #LetUsBreathe Collective, member of the Black Abolitionist Network (BAN) and co-host of the radio show and podcast Airgo, Damon Williams has remained a steady figure in Chicago’s movement towards abolition.

Inspired and solidified by BAN, the #DefundCPD campaign has taken to large scale protesting, education events and civic participation to cultivate a liberatory movement to defund and abolish the Chicago Police Department (CPD).

If you’ve ever listened to Williams speak, you’ve learned that slavery has never ceased to exist –– it has merely changed form and shape, continuing in modern-day society coupled with the continued movement for abolition and the fight for Black liberation from carceral systems.

14 East spoke to Williams about the work at Defund CPD, what the path ahead looks like and the City of Chicago’s recent budget release for this Q + A style story. Quotes have been edited for length and clarity.

Could you just talk a little bit about the mission behind the Defund CPD campaign, how it started and its long-term goal?

The Defund CPD campaign is a mass mobilizing, participatory grassroots political campaign aimed at taking and transferring resources and power away from the Chicago Police Department. This campaign is in alignment with a broader movement that is pushing towards the abolition of carceral militarism, locally and globally. Specifically, in our context, that means police, prisons and jails – focusing on the Chicago Police Department.

The campaign started as a way to harness and be in flow with the energy of uprising that was built this summer. We saw as the pandemic and violence resulted in Black death, including the execution of George Floyd, saw an uprising and a political moment, like we’ve not seen in America [in recent history] or in terms of the scale of simultaneous action happening across all 50 states.

In that time organizers – many of which already experienced traumatic abuse that summer during actions by police –  came together to create a campaign. Particularly in a Chicago context, [to ensure] that elected officials or folks in power cannot co-opt demands coming from the street or coming from the grassroots. So we placed the demand of 75 percent divestment from CPD with redistribution and reinvestment into community services as a way to guide and lead the conversation in Chicago.

Can you outline the distinction that Defund CPD makes between the goal of abolition versus why we can’t put money towards reforms?

We see elected officials, really like for many mayors across the nation, who come out and try to reframe or quell or even gaslight the demands of the people. And that is historical. That is what always happens. Reform is often just a political slogan or dialogue used to remove pressure. In addition to the harm they cause, which is primary, police departments are large, oversized bureaucracies, with military surplus. To redirect the motion of these gigantic warships just takes a lot of effort that most political agents don’t want to do. So usually some type of quick sound bites of reform or change are offered as a way to kick the can down the road and for there to be no change.

You see with the consent decree here in Chicago, most of those things have not been acted upon in the same way that it was when it was used as the campaign talking slogan for our current mayor. That was to be expected and that was what history teaches us is going to happen.

Even when well intended, reform is not effective. Mariame Kaba is an amazing source and teacher and her op-ed in the New York Times, “Yes, We Mean Literally Abolish the Police” gives some of this history really well. For the last 350 years, but certainly the last century, we’ve seen almost in every year, certainly in every decade, incidence of egregious state violence, judicial and extrajudicial killing of Black people. That is what this campaign and this movement is working from a historical standpoint to push against. History shows us that these reforms always further empower the police instead of giving us access to create new systems that create new ways of engaging as communities and as human beings.

These demands, this approach, is not new – we saw that the Black Panthers of the ‘60s and ‘70s were naming the carceral state and the judicial system as harmful. We’ve seen across the globe liberatory movements that are against militarism, which is a historical and global push that we are coming from. What positions of power do is aim to quell the notions of this opposition and make them seem disorganized or make them look smaller, or to change the ball. Let’s actually address how [carceral institutions] are the foundation of American racism, not incidental or secondary to it.

History shows us that these reforms always further empower the police instead of giving us access to create new systems that create new ways of engaging as communities and as human beings. 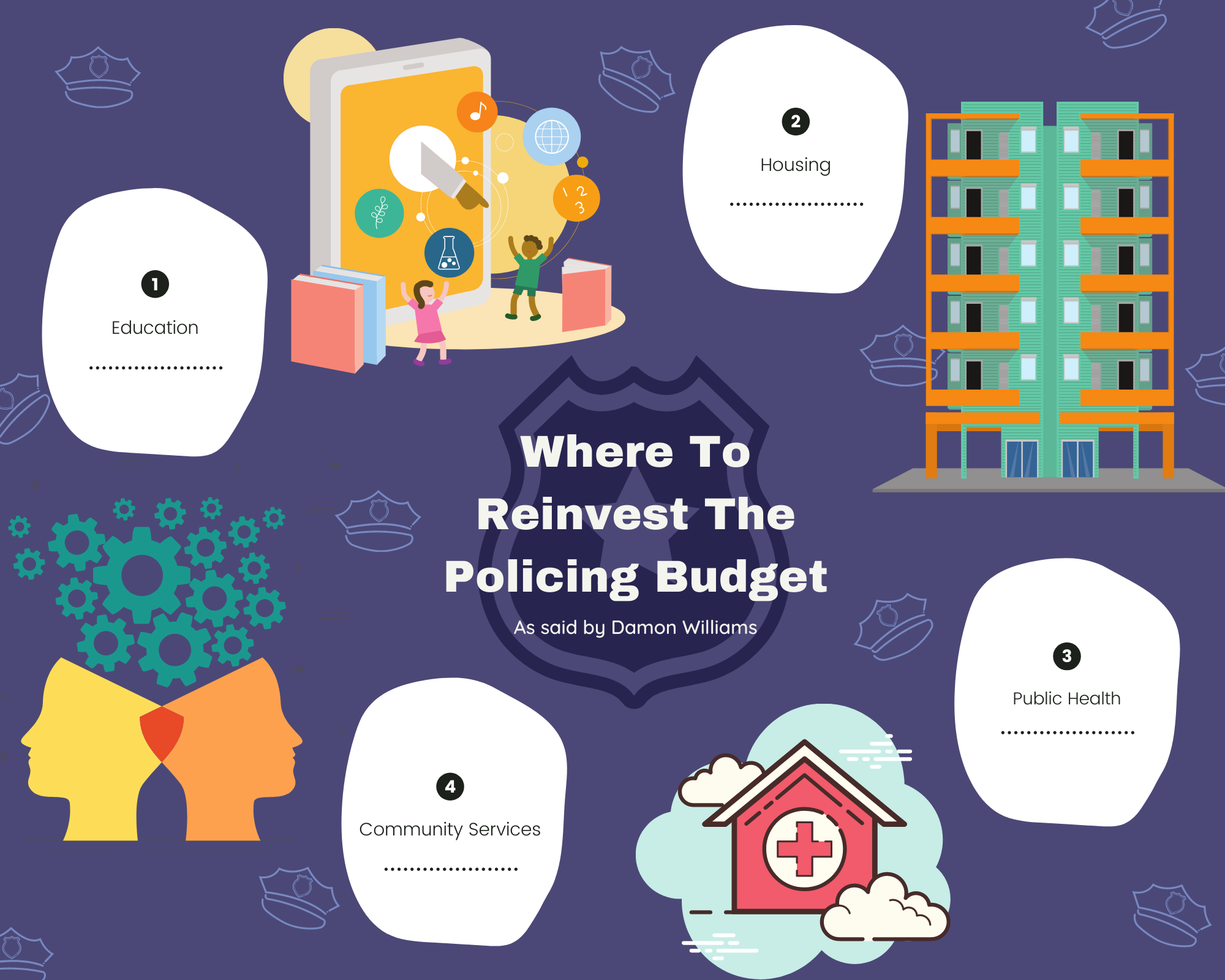 What are some examples of reinvestments that could be made with the current police budget that would lower crime and provide more appropriate ways of dealing with potentially harmful incidents that do occur?

Most people are calling the police, because there is conflict in our community, and there is no other institution to respond. And I think when these things are absent, it actually creates conflict. Most police calls are just about “erratic” or “scary” or “suspicious behavior.” And as we are deconstructing ableism in our society, we understand that most of those behaviors are connected to cognitive function, trauma, emotional patterns. In the city right now there’s a ‘treatment not trauma’ ordinance being pushed and developed, that would redistribute resources from the police budget to create mental health that we can call.

When these institutions are not only fully resourced, but able to respond and have proper accountability, they are in communication with each other, and that’s when we are creating a communal fabric of institutional services that are able to respond to the needs of the community.

So just having [violent response by police] eliminated, and people knowing that there is somebody to call … because that’s usually what folks are afraid of. They’re not saying they want a military agent or, you know, as I say with intention, a slave catcher. People just want to be able to call [for help] and they’ve not been provided, you know, access to other examples.

I think secondly, alternatives around gendered and sexual violence. So whether that be sexual assault or domestic violence, that being another immediate intervention that we can create new programming for that women, femme, gender nonconforming, LGBTQ+ people and children know that they have access to when their body is being violated or made vulnerable or being attacked or harassed in the household. Housing actually is a big issue [as well], and conflict happens when people are overcrowded. We need to be able to address our housing crisis, and then invest in institutions that are designed to assure people housing, so that isn’t another space for conflict and violence and emergency services.

So at a basic level, it’s investment into education, housing, health and mental health, in communal spaces, having those institutions rooted in our communities. When these institutions are not only fully resourced, but able to respond and have proper accountability, they are in communication with each other, and that’s when we are creating a communal fabric of institutional services that are able to respond to the needs of the community.

Earlier this week, Mayor Lori Lightfoot released the 2021 city budget, which did not reflect the level of defunding CPD that Defund CPD is calling for. What does this mean for the campaign in the months ahead?

I think it’s important to note that, you know, this was no longer just a marginal idea of a few young activists in a room somewhere – this is now a major communal demand. This year, we saw five times increased participation in the budget survey, which alone notes that something is happening. In this historic participation, 87 percent [of survey respondents] are saying that we want the type of divestment and reinvestment and the defunding that the campaign is naming. And today, what the mayor says … as long as she is mayor, what the people want will never happen.

Our mayor is standing in opposition to the movement of young Black people.

In terms of where we are, I just want people to have to politically reckon with the ways in which our representatives do not operate in a democratic function. We idealize and valorize how Black people need to vote their way out of oppression.

The Black woman who was voted to be the mayor of Chicago said she will not do what the people want; she will not bend to the will of  the people. She is upholding this violence as a federal prosecutor who works on the police board, and also worked in the internal police review body. She ran on this doublespeak of reform as a prosecutor and as a carceral agent. She did not keep a promise and wanted to invest in a bloated cop academy, in order to respond to violence in the same neighborhoods where there were the most school closings. And we’re sitting now as communities across the nation are demanding this transformation that we just spoke about.  Our mayor is standing in opposition to the movement of young Black people.