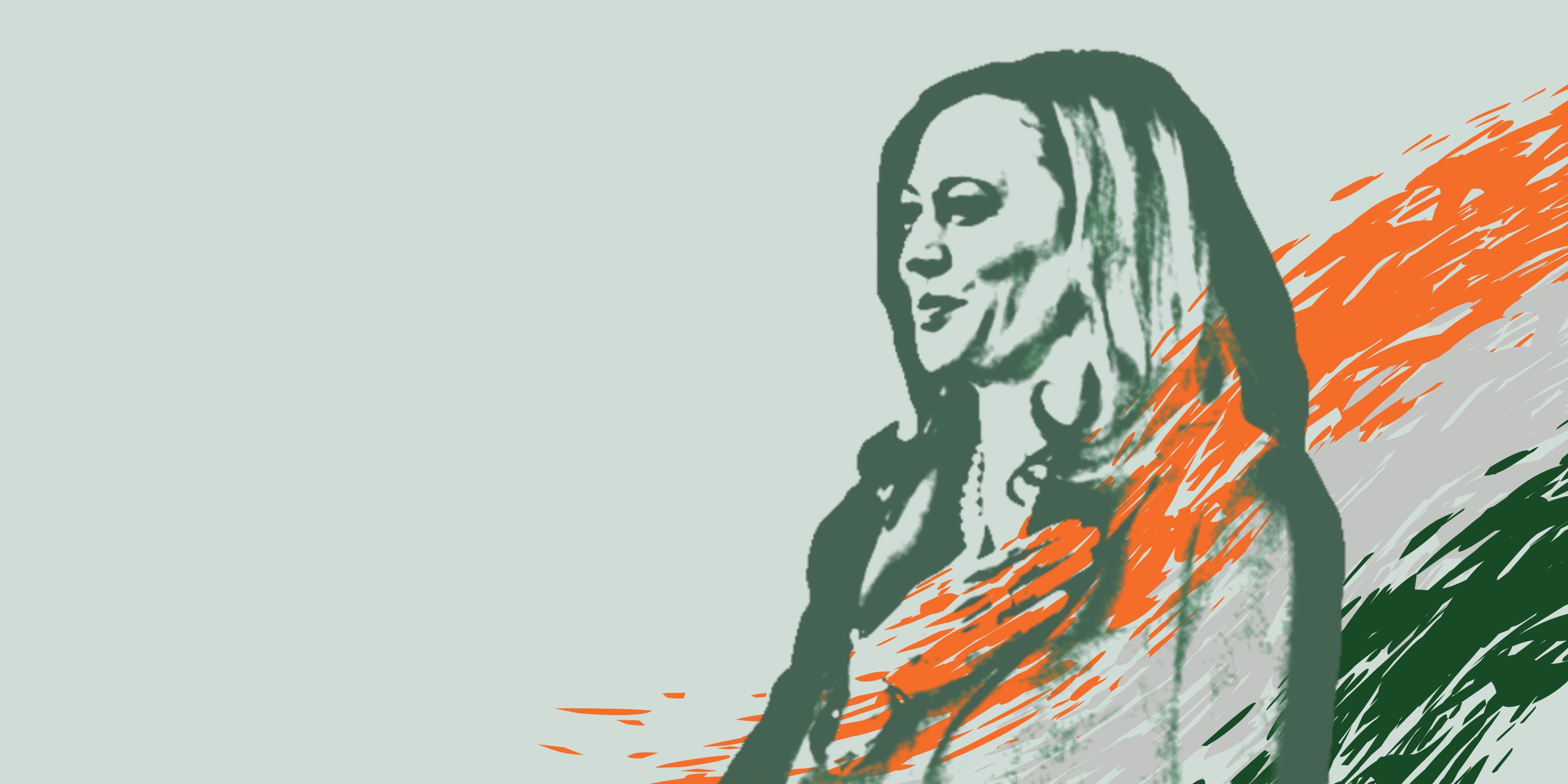 Democrats have labeled this win as “historic,” highlighting Harris’s cross-cultural background of being the daughter of immigrants, with a South Asian mother and a Jamaican father. Since the start of her campaign, she has received support from the Indian American community.

“This idea that only white men can serve as president and represent even the most diverse districts, but Black women and minority women can only represent Black women and minority women, is problematic,” said Sayu Bhojwani, founder and president of New American Leaders and New York City’s first commissioner of immigrant affairs, in an interview with USA Today. “The nomination of Kamala is a signal, an opening to the possibility that any of us who consider ourselves as American can run for the highest office of the land.”

Celebrations of the memorable moment announcing the Biden-Harris victory were carried out in the streets of the nation’s capital and beyond — a burst of excitement and relief after four strenuous years under Donald J. Trump. Citizens in Ireland, Tokyo, Germany, Spain and Croatia celebrated by displaying the American flags outside their homes, taking pictures with the headlines in newspapers and painting billboards with murals of Biden and Harris.

In Harris’s ancestral village of Thulasendrapuram in India’s southern city of Tamil Nadu, fireworks were set off by residents of the small village in celebration. Murals of her were displayed, children gathering on the roads held signs, and banners and offerings of gratitude were presented in the temple.

The election of a woman to political office was something Harris’s maternal uncle, Gopalan Balachandran, couldn’t even imagine at the time when his sister, Shyamala Gopalan, migrated to the US to study in 1958. For decades in India, earning an education in the U.S was a concept desired by many South Asian families, but was achieved by few. However, the progressive mindset of Harris’s maternal family urged every member of the household to pave their own path in careers and life and Harris embraced that same determination to secure a position in office. Balachandran also underscored the simple values Harris was taught growing up in her household.

“Don’t judge anybody by what they eat, what their religion [is], what language they speak and anything like that. Basically, be a human being and there is nothing special about being a human being in our family,” said Balachandran in an interview with Voices of America.

Influential figures in India, such as Prime Minister Narendra Modi, took to Twitter, congratulating Harris, calling her success “pathbreaking” and displaying confidence that U.S-India foreign relations will strengthen under her guidance and leadership. President of the Indian National Congress Sonia Gandhi recognized Harris’s “unwavering courage” and applauded her for her support of human rights and democratic values.

Heartiest congratulations @KamalaHarris! Your success is pathbreaking, and a matter of immense pride not just for your chittis, but also for all Indian-Americans. I am confident that the vibrant India-US ties will get even stronger with your support and leadership.

Between 2000 and 2010, South Asians were the largest growing immigrant group in the United States with over 242,000 South Asians currently residing in Illinois, originating from India, Pakistan, Bangladesh, Sri Lanka and Nepal, according to a 2013 report from the South Asian American Policy and Research Institute (SAAPRI) and the Chicago Chapter of Asian Americans Advancing Justice. According to the same report, South Asians have also grown by over 55 percent in Illinois since 2000. In May, Pew Research Center released a table containing the statistics of the Asian American population nationwide. In Illinois, there are 9,059 eligible voters and 53% are eligible to vote among the U.S Asian population.

Dr. Zahra Syed, a UCLA-trained community family physician, shared a glimpse into how she campaigned heavily for the Biden-Harris administration, based on her experiences as a physician on the front lines during the pandemic.

“I felt that, you know, I couldn’t just sit back and take a back seat and let others decide what’s happening,” said Syed. “I worked on some campaigns, I think Indian-Americans for Biden-Harris, They See Blue and Doctors for Biden. We really need somebody who’s an advocate for science and uses science in their pandemic planning and for everything else that’s happening.”

South Asian Americans have a history of making a positive impact on their communities with volunteer services, representing their immigrant communities on village boards and even campaigning for certain positions in office. 2018 marked a historical moment for the South Asian community as Ram Villivalam became the first South Asian candidate to be elected in the Illinois General Assembly.

Despite the advocacy by South Asian Americans to bring positive reforms and enact impactful policies, several disparities, such as language proficiency, hinder the opportunities for the South Asian community to become thoroughly involved in voting and civic engagement.

However, some strides have been made to overcome their obstacles to voting. Section 203 of the federal Voting Rights Act provides resources such as forms, directions and materials for the electoral process for voters who are not proficient in English. In recent years, Section 203 has even expanded to assist the Indian American community in Chicago and suburban Cook County. Before the election, the Carnegie Endowment survey showed that approximately 72 percent of Indian Americans were planning to vote for Biden.

“Someone who looks different shows that you can do it”

Anuradha Rana, a cinema production, directing and screenwriting professor at DePaul, was excited about the election of a South Asian woman as vice president. Being a South Asian woman and immigrant herself, she was thrilled with the unity of two different cultural backgrounds.

“There were so many amazing women running for president this particular election, especially from the Democratic Party. I wasn’t surprised that [Biden] picked a woman as a running mate, but it was great to hear that Kamala Harris was going to be the person mostly because, you know, she comes from this background of Jamaican-Black as well as South Asian so it felt like the right person,” said Rana.

During the moment where injustice, oppression and persecution have surfaced as mainstream issues, women like Rana are hopeful that Harris’s experience of achieving success in her career and being raised by immigrant parents will bring a bigger and broader perspective to representation.

Rana is also hopeful that now there is “a person in office who will listen to us.”

Despite support among South Asian women, there has still been vocal criticism of Harris for her record as a prosecutor. Known as the “top cop” and the “progressive prosecutor,” running for public office in 2003 was a difficult task since “there was no such thing as a “progressive prosecutor,”” according to NPR. Her “tough on crime” rhetoric was used to get elected into public offices and the last case in California prosecuted by Terrence Hallinan used the death penalty. While running against Hallinan, she played a moderate role where bringing law and order to the streets was a concept at the forefront of her campaign. Her earliest programs, “Back on Track,” provided opportunities such as internships, resume building and counseling for first-time nonviolent offenders. However, in order to be a part of the program, offenders had to plead guilty. After completing the entire course, felony charges would be removed from their records. Lawyers who have worked under Harris have been accused of prosecutorial misconduct and covering up information which could have resulted in wrongful convictions; advocated for the endorsement in California to criminalize truancy; pushed for programs that would allow more jobs to be granted in order to reduce the number of prison sentences but fought to keep prisoners in prison after they were proven innocent.

“I mean I think we should monitor all of those things. I do remember reading an article that was dissecting her role as attorney general in California in terms of incarceration, especially of Black men, but also truancy,” said Rana. “It’s easy to isolate one person and say ‘She was in charge of all of these things that happened’ but I don’t know what she came into.”

The support she showcased, alongside Biden, for Israel was also a factor to be held accountable for.

“In terms of her record as a prosecutor, yeah I mean, there were problems there, I’m not going to say that there were not,” said Haider. “As a prosecutor, I can understand, and I don’t say [that] what she did was right for sure, and I will say for lawyers once you start opening certain cases you cast doubt. Especially if you’re a prosecutor, you cast doubt on all the other cases that were good. So I can see, while I disagree with it, where she may have been reluctant to open them again.”

Alongside her history with mass incarceration in the criminal justice system, Harris’s anti-truancy program, created in 2008 and passed in 2011, drew criticism during her campaign in the 2020 presidential race. The policy was created allowing district attorneys to charge parents with a misdemeanor if children missed a significant portion of school without a valid reason.

Yet, in the face of this criticism, South Asian women still largely showed up for Harris and some remain enthused by the significance of her victory.

“In her career, Ms. Harris did not barter or trade to get the support of more conservative law-and-order types; she gave it all away,” wrote former director of the Loyola Law School Project for the Innocent in Los Angeles Lara Bazelon, for the New York Times.

Additionally, Harris’s victory also brings a surge of confidence within the community of South Asian women. Farrah Haider, an attorney in Washington, D.C., highlights how seeing Harris do what she did during the campaign was special because she was something all South Asian women have felt at one point in their lives — different.