From Anonymous to Advantageous: The Evolution of O...

Growing Up in the Age of the I..

From Anonymous to Advantageous: The Evolution of Online Presence 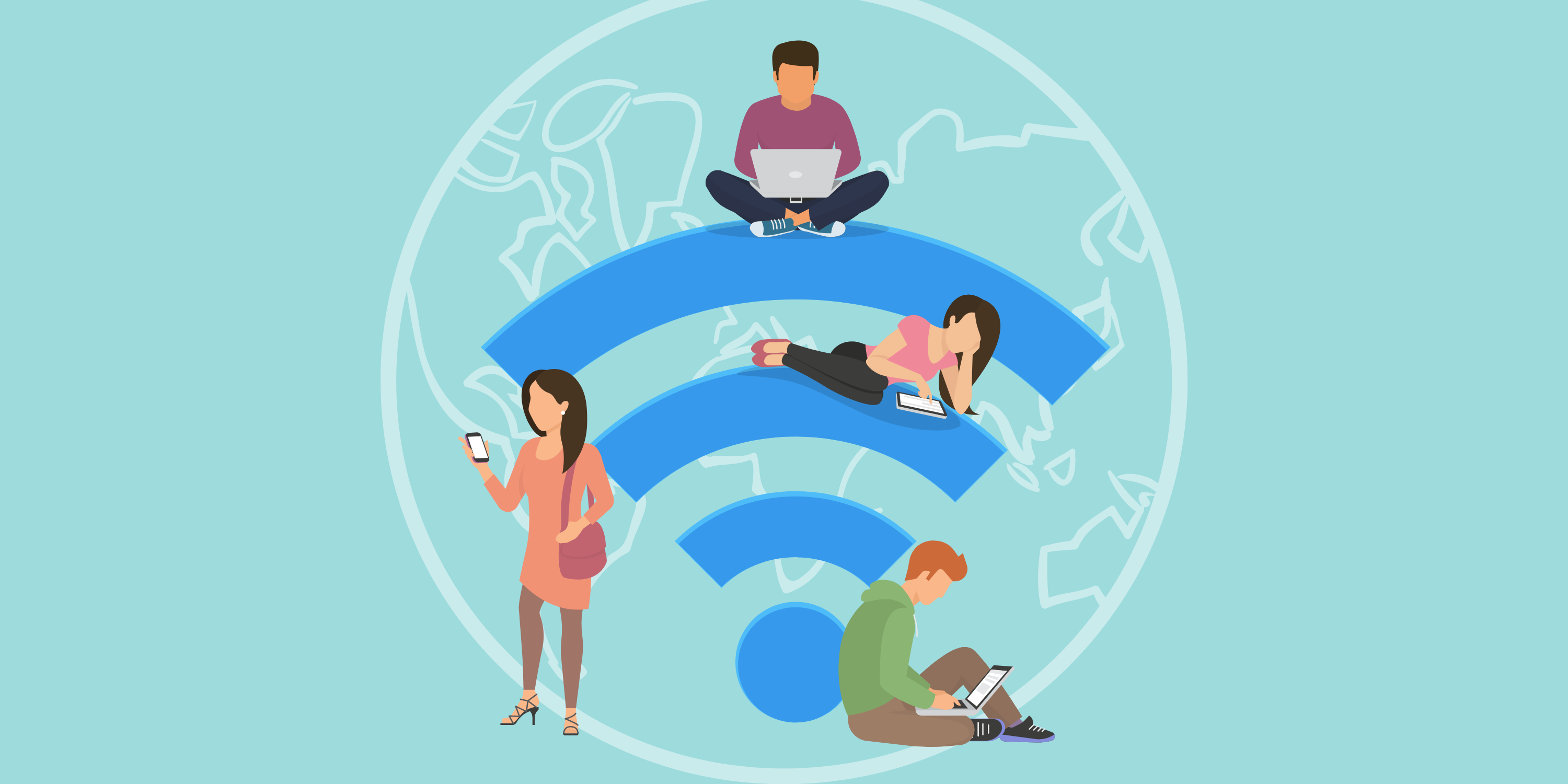 When Gen-Z children were born and late millennials were growing up, the internet and social media were emerging as part of a new phenomenon, a new technological revolution that was drastically going to change how society functioned. As the children of these generations grew older, they became surrounded by the concept of social media and the internet, which continued to grow in ways unimaginable.

Instead of needing cell phones, kids and teenagers could download Snapchat on their iPads or iPods or use Instagram from their laptops. And although the internet and social media allowed for a lot more accessibility in terms of social, professional and educational lives, there was fear instilled among the parents, guardians, and supervisors of these generations. Cybersecurity threats caused adults to stress the importance of remaining anonymous online and preventing oneself from posting any identifying information to social media platforms or websites. Children listened at the time, making non-identifying usernames and being cautious of what they posted and whom they added to their list of followers and Internet friends.

Now, however, is an entirely different story.

In today’s age of the internet and social media, people’s entire lives are online — from what school they go to, the city they live in, work emails and links to their other social media profiles all in their bios — their online presence has shifted from keeping anonymity to being completely public. How did we get here? How did we go from not addressing strangers on the internet to calling every mutual Twitter follower “bestie”? How did we go from refraining to post any identifying information to posting our local hangout locations on our Instagram posts or leaving our location on Snapchat? What caused this major shift in the span of just a few years?

Journalism program chair and professor Jason Martin of DePaul University says that there are two different types of explanations for this change — one sociological and one technological.

The sociological explanation revolves around age. Martin stresses how Gen-Z and late millennials started using technology under some sort of parental or guardian supervision, and as they grew older, that supervision slowly faded away as children became more independent, understanding and educated about how to use the internet and social media in a way that wouldn’t bring them harm.

The technological explanation revolves around the monetization of content and using one’s online presence to search for internship and career opportunities or create a brand or presence to be well known. This was not necessarily the case just a few years ago.

“When I was around 12, my mom made me delete Instagram because she was scared of predators, but now, she lets me meet internet friends,” said Konc. “I think that as we’ve grown, so has the internet and people’s understanding of it.”

Alyssa Pangilinan, a junior at DePaul, touched on the aspect of age when explaining the privacy shift. “I wouldn’t want my 11-year-old sister talking to random people on the Internet,” she said. “But as a junior in college, it’s fun interacting with strangers in the comments of a TikTok post.”

DePaul freshman Venice Albania emphasized the technological theory, saying that “nowadays, we have LinkedIn profiles and similar things, so it seems that ‘being professional’ aligns with having an online presence.”

This is something that DePaul’s own Career Center recognizes, recommending to students that they “rev up” their social media in order to showcase their professional skills, network and establish a personal brand in order to best “advance your career.”

“An active, well-thought-out social media presence can help you professionally. The right content can provide prospective employers with a good sense of what kind of person you are,” reads a tipsheet from the Center. “Because many employers search social media as part of the vetting process, making it easier by including links in your resume shows you have nothing to hide.”

DePaul communication studies professor William Baglia attributes the change in online presence to three things, one being the idea that being “real” and that exposing oneself equals perceived success — echoing Martin’s technological explanation.

“I believe this encourages more and more people to share the most private aspects of their lives, possibly in the hopes of more ‘likes’ and ‘follows,’” Baglia said. “But also — by extension — the idea of YouTube notoriety and/or Twitter celebrity, which can generate dollars,” he continued, alluding to the concept of social media “influencers.”

“We learned to stop fearing it and start using it as a tool for good.”

Many young social media users echo that when the Internet and social media were introduced to them as children, it was a very new concept, which is why there was a lot of hesitation and cautious warnings from the adults in their lives. However, as it grew over time, people became more comfortable with the idea of having an online presence.

“I think the world has progressed to be more open to meeting new people,” DePaul freshman Peter Warda said, adding that due to this it makes sense to be able to make friends with others with a click of a button from our homes.

“The initial hesitation with social media and the internet was because it was so new and unknown,” DePaul freshman Gwen Ashworth said. “However, as it expanded and the youth have become more familiar with it, it has manifested into an outlet or form of expression for many, which is why we see so many people with public profiles and internet friends.” Ashworth added that these things can exist as a “safe haven” and a form of connection for many young people today.

DePaul freshman Victoria Smolen stressed how the internet ended up becoming more and more ingrained into the daily lives of young individuals, and as this progression occurred, “we learned to stop fearing it and start using it as a tool for good,” she said.

Smolen also acknowledged the negative experiences that come with an online presence, making sure to add, however, that the growth and progression of the internet and social media has shown that the positives outweigh the negatives. “This allowed people to feel more comfortable in their use.”

Other DePaul students continued to stress the positive side of having a public online presence, but not without acknowledging the harm and danger it can bring.

“I think it’s both a beautiful and scary thing all at once,” freshman Mya Wraggs said. “It allows us to meet so many people we otherwise wouldn’t have met.”

Freshman Megan Boucher was able to find her roommates and friends through social media. “I don’t think it’s necessarily a bad thing that it has grown so much because social media is such a big part of our lives now,” Boucher said. “However, you still have to exercise caution.”

“It can be scary because of how vulnerable it makes you,” Wraggs stated.

Ashworth added that social media and the Internet “have made young people feel so connected, but at the same time so alone and/or worthless.”

“I think it’s both a beautiful and scary thing all at once,” freshman Mya Wraggs said. “It allows us to meet so many people we otherwise wouldn’t have met.”

DePaul student Adamson Novak reflected on his social media use. Novak has a public Instagram account, and he noted that caution is always at the top of his mind.

“I still think carefully about what I post to make sure I don’t give away too much personal information online,” Novak said.

He stressed how safety is important, and as long as those precautions are taken, “it’s cool to find new connections with people whom you wouldn’t have met otherwise, especially now with the pandemic.”

Although several students and social media users stressed the positives of a public online presence, many stressed the dangers with how ‘“normalized” it has become.

“I find it troubling, the amount of information people are willing to put online,” DePaul student Hope Nagain said. “I feel that this shift in social media usage has a lot of danger attached to it which people seem to forget.”

Freshman Logan Greene added that there is still a lot to be careful of — specifically referencing Snap Maps, a feature within the Snapchat app that allows for users to see the exact locations of their friends, mostly in real time, and see geotagged posts submitted by users. Users have the ability to opt out of the feature, though many choose not to.

“The thought of my exact location being available to anyone 24/7 is very weird to me,” Greene stated.

DePaul student Jacob Coggshall shed light on cybersecurity issues that have become common for those who use the internet.

“I feel like most people nowadays have fallen victim to a breach of privacy online in some way, myself included,” he started. “It’s becoming quite a normal thing to happen, and it appears there is nothing set in stone to stop it.”

Online presence and full transparency on the internet and social media will continue to grow at an accelerated rate, as younger people gain access to them at an earlier age as the years go on. This does come with its set of negative and dangerous outcomes and experiences; there are areas of improvement when it comes to young people on the Internet to prevent them from facing the dark side of having an online presence. However, with communication, education, and a mutual understanding between adults and children, the result and overall use can outweigh these as a force for good, whether it’s socially, professionally or educationally.