Comedic Sensibility, Coming Out, and Being a Minor...

The Kindness Korner on 106th

Comedic Sensibility, Coming Out, and Being a Minority Voice — Discovering the “Funny” 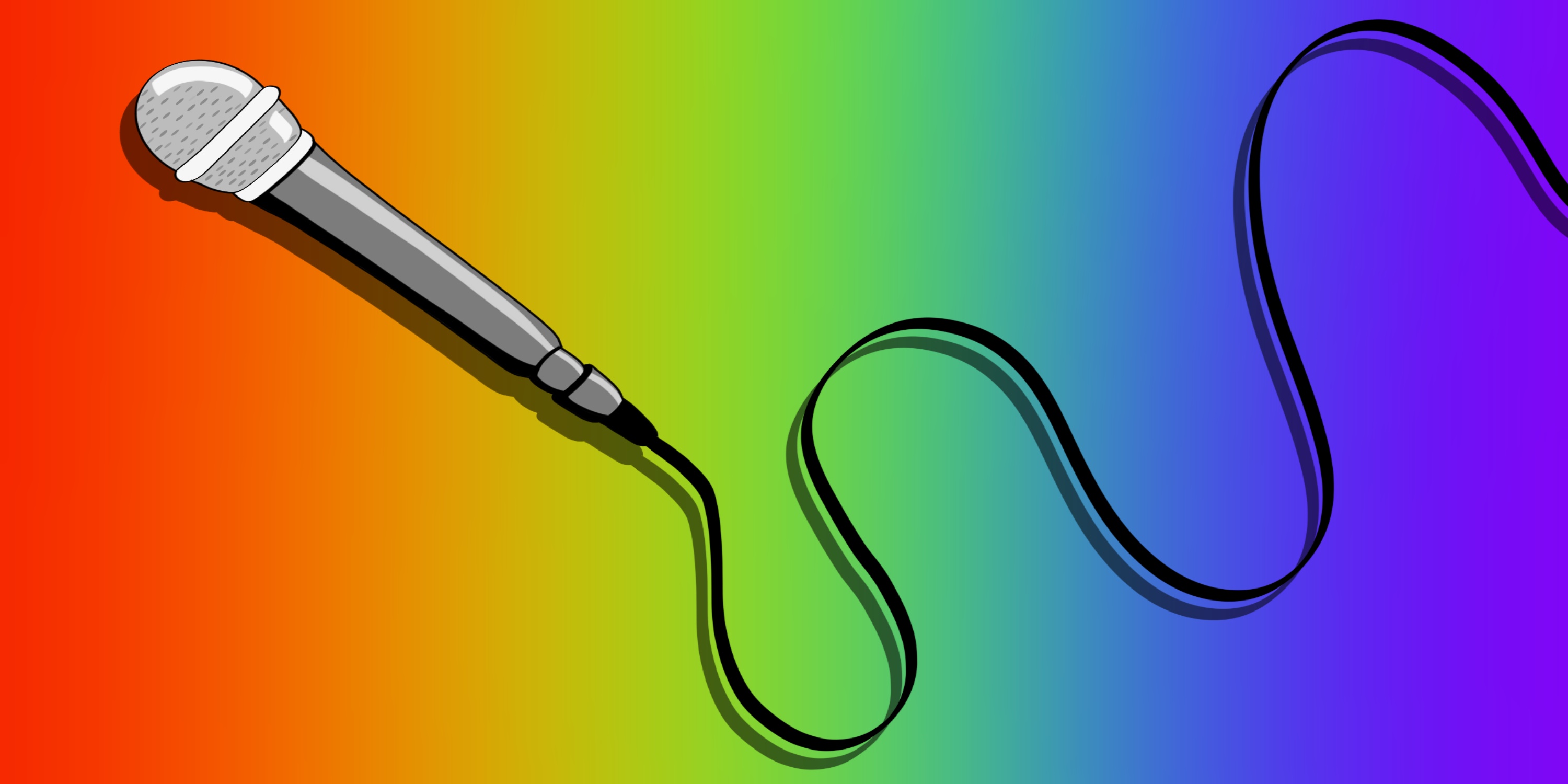 Two comedians found their coming out stories to be slow builds rather than eureka moments. One thing they both have in common is that they’re able to retrospectively find humor through anecdotes of their past selves.

A comedian’s journey and life experiences are reflected within the content of their performances. Having diverse perspectives within comedic spaces is needed and can be used as a two-way conversation between performer and audience member, who cannot only laugh but also use it as a learning experience as they navigate society.

The intersections of a minority racial or ethnic background and an LGBTQ-identifying individual bring about unique life experiences and social problems. For Chicago-based performers Asia Martin and Ben Cumings, comedy is a passion and a space where perspective is shared, while also keeping it funny.

For Martin, pursuing a degree in dramatic theatre led her on a journey of self-discovery to a word that is able to tap into each facet of her identity — queer. She defines the umbrella term as both politically radical and that which confirms her attraction to people, regardless of their gender.

Ben Cumings discovered his comedic sensibility through his lived experiences as a bisexual and half-Korean, half-white performer. He began acting in college and was one of only a few Asian-American comedians on campus at Bowdoin College in Maine.

Both performers have complex and multilayered identities that they bring to their craft.

As a queer Black woman originally from Washington, D.C., Martin transplanted to Chicago for school, studying at DePaul University’s theatre program where she majored in dramatic theatre.

“I always chose comedic monologues and scenes,” she said.

Overall, college was a very formative experience for Asia. With DePaul being a predominantly white institution, she found a sense of community within a group of friends who were also people of color and in the theatre program during her undergraduate career between 2012-2016.

During this time, Martin identified as bisexual.

One day, her then-roommate invited her to The Chicago Dyke March. The Dyke March Collective is a celebration, across the United States, of dyke, queer, transgender, and bisexual-identifying individuals. This yearly celebration is thought to be more people of color-inclusive than the white-dominated sphere of Chicago’s Pride Festival in Boystown.

Chicago’s queer scene is sometimes diminished to just Boystown (recently renamed Northalsted), a predominantly white section of Lakeview. But unsurprisingly, not all “gay-friendly” clubs and bars are welcoming spaces for POC LGBTQ-identifying individuals. Martin was seeking LGBTQ spaces that were more POC-inclusive and The Dyke March was eye-opening for her.

“I cried when I walked in. I saw queer people of color who were also radicalized,” she said. “This was more of my vibe.”

After being surrounded by more people who identified as queer, the term “bisexual” didn’t fit quite right with Martin, so she kept searching for a word that encaptured every part of her identity.

It took a while for the performer to come to terms with her sexuality. She was not yet “out” to friends or family, at least not out as queer.

“I came out to my mom as bisexual in high school in D.C.,” said Martin. “She knows it isn’t a choice. It makes life harder.”

As an upperclassman at DePaul, she was invited to perform at “Strip Joker,” a unique body-positivity show that augments the voices of underrepresented comedians of different sexualities, races, gender identities, and body types. It is produced by five LGBTQ Chicago comedians. The show was originally hosted in Andersonville’s now-closed Hamburger Mary’s and Mary’s Attic, a queer-friendly bar and entertainment space open for almost 15 years, its closure partially due to the pandemic, according to Block Club Chicago.

At “Strip Joker,” Martin reflected on wanting to jump into conversation about queer topics and issues but became somewhat paranoid, thinking, “But then they’ll know I’m queer,” she said.

Yet Martin’s comedic sets were beginning to more closely involve topics she deemed as gay. With this, she felt compelled to come out again to her mother, who originally thought it was a sort of phase.

“I didn’t know you had to come out again,” Martin imitated her mother during the phone interview. But this time, Martin was coming out as queer; not bisexual.

This is where Martin’s comedic sensibility comes alive.

After graduating from DePaul in 2016, the alumna found a passion for comedy as a place where she could also address social issues and talk about being within the LGBTQ community as a queer woman of color.

“I was always the comedian with family and friends. Then I heard about a job at Second City when I got out of college,” Martin said. Second City is an improvisational theater in Chicago where Martin is currently a part of the ensemble.

“I discovered later on that I’m queer in a ‘f—k the police’ kind of way.” Martin said, linking queer identity with historical and current pushback against police brutality.

Martin’s multilayered perspective is reflected in her approach to comedy and her comedic sensibility, backed by each facet of her identity:

Everything in her performances is connected to her experiences and life as a queer Black woman and discovering the segregation of the city from an outsider’s perspective.

“It’s intersectional for me. It all goes hand-in-hand with my Black identity; I always think of the bigger picture when I’m making the jokes,” she said.

Ben Cumings’s comedic approach differs a bit with less emphasis on his bisexual identity during his performances, except in his performance in “Steamworks: The Musical” with Annoyance Theatre in 2019. Cumings played Al from Nebraska, a character searching for love in a Boystown bathhouse.

Cumings also grappled with the exploration of his sexuality and didn’t come out until 23.

“It’s intersectional for me. It all goes hand-in-hand with my Black identity; I always think of the bigger picture when I’m making the jokes.”

“I’m straight passing. Most people don’t know I’m bi and I’m dating a woman; I don’t have the stigma attached to me like gay [men] do,” he said. “I talk less about being bisexual because of that. Bisexual erasure is real though. I just feel that there are bigger problems in the queer community besides bi people not being applauded.”

Cumings has performed with Second City, iO, and “Stir Friday Night,” Chicago’s longest running all Asian-American comedy troupe. Born in Chicago, Cumings moved around a lot, living in Tokyo, Virginia and Maine, where he attended college and was one of only a few Asian-American comedians.

“In college, there was one other Asian guy, mostly white guys,” he said.

After becoming the leader of his college improv team, he vowed to work toward making it more diverse with more than just a cisgender white male perspective. This is when Cumings began working on making the scenes they were performing more interesting, he said.

As a half-Korean and half-white person, he feels a sense of white proximity privilege, or the close affiliation with still being a part of the majority. But at the root of it, some comedy spaces have been more enjoyable than others for Cumings. With “Stir Friday Night,” having an all Asian-American cast eases the burden of feeling tokenized or having to be the politically correct fact-checker for his fellow performers.

“You kind of have to handle scenes when almost everyone in the scene has a blind spot. But if you quit, then there’s one less Asian improviser,” he said.

However Cumings said that there are ways to take back his power when dealing with this phenomenon. A big power move for him is his approach to comedy. Cumings doesn’t like the idea of falling into stereotypical humor based around race, especially Asian stereotypes.

“I did a [improv] character on an Asian men’s rights guy. It was a satirical character based on Asian incels. People got testy. It was an Asian gaze response,” he said.

During the pandemic, both Martin and Cumings continue to work on their crafts.

At the beginning of the pandemic, Martin wrote sketches at the Auxiliary Art Center, a creative DIY space for the performing and visual arts on Belmont Avenue. Martin, her friends and partner had been brainstorming sketches for a few hours a day, writing them and shooting them.

“It was nice to create without thinking about making money or impressing producers,” Martin said. But post-quarantine, she can be seen in the new season of Showtime’s “The Chi” as Cherry.

For Cumings, he admits to a lack of creativity during the pandemic, but he continues to work closely with “Stir Friday Night,” streaming their tabletop gameplay of Dungeons and Dragons, an improvisational character-based board game on Twitch. The troupe also plays other games online.

“Video sketches feel like decent work during quarantine,” he said

Both comedians leverage their racial and ethnic backgrounds, lived experiences and perspectives to share with the world laughs and more informed comedy.

“There’s always a funny way to make light of something and talk about issues that affect us,” said Martin.