El Milagro workers are partnering up with Arise Chicago to demand better working conditions from their employer. 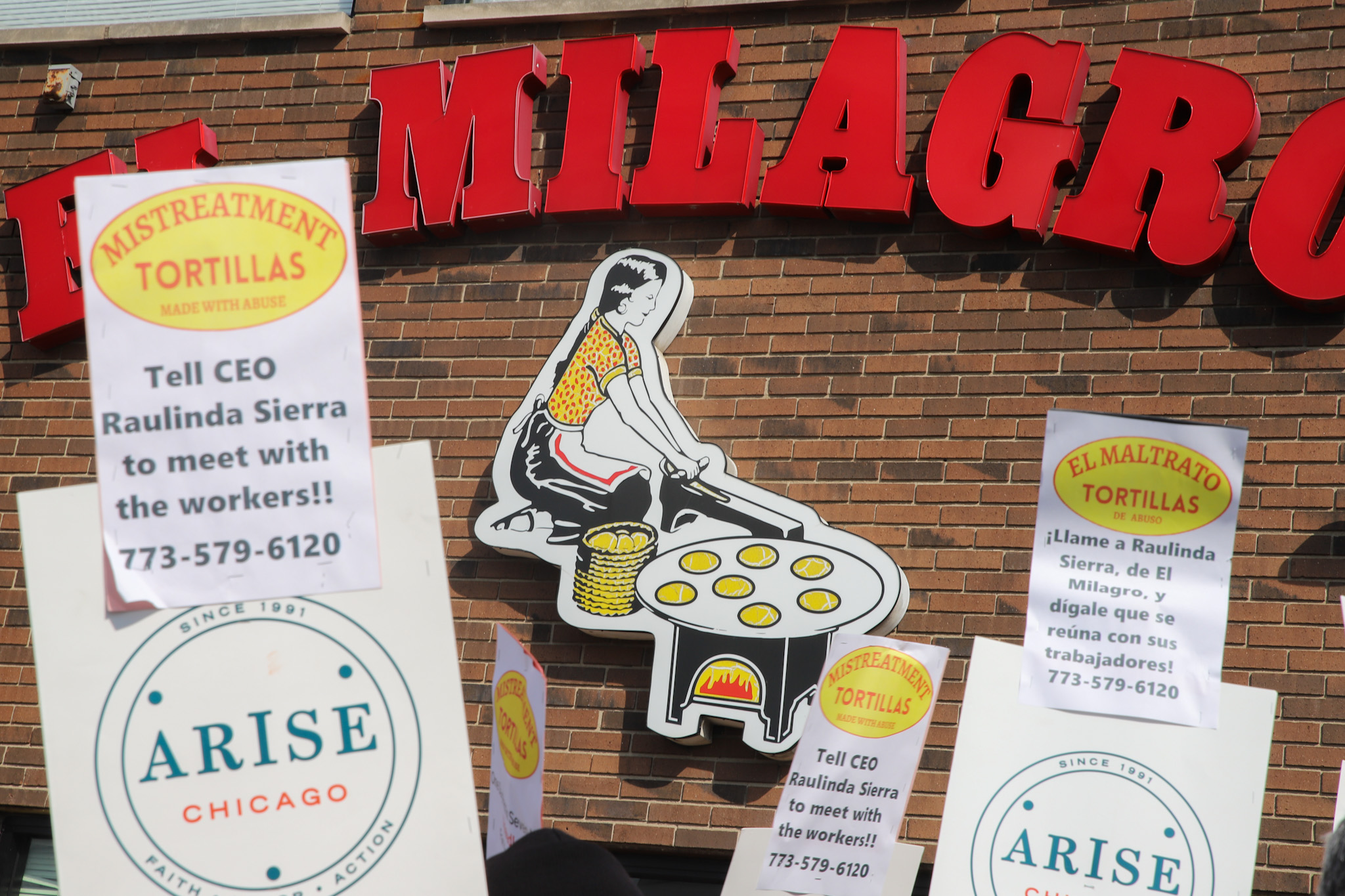 “Milagro escucha, estamos en la lucha,” translates to “Milagro listen, we’re in the fight” and is one of the many rally calls community members, employees and organizers chanted outside the doors of Taqueria El Milagro two weeks ago.

Employees from the El Milagro tortilla manufacturer walked out from the job at two Chicago sites, including a facility located in the southwestern neighborhood of Little Village on September 23. The workers say they are being taken advantage of with heavy workloads, low wages, sexual harassment at the workplace and a work environment that punishes them for using sick days.

El Milagro has long been a staple in the community, producing local favorite corn and flour tortillas. For years, customers and workers remained loyal to El Milagro but recent events exacerbated by the COVID-19 pandemic has workers standing their ground.

Among El Milagro employees rallying is Irma Gonzalez, a long-time Little Village resident and a six-year employee with the company.

“There are always problems,” Gonzalez, who works in the department of quality control, said. “The thing is that the employees are scared to talk.”

Gonzalez is four months pregnant and participated in the rally along with her peers during their second shift as they walked out of the facility. She and the rest of the employees returned to the job site near 21st street and Western Avenue, but were locked out. 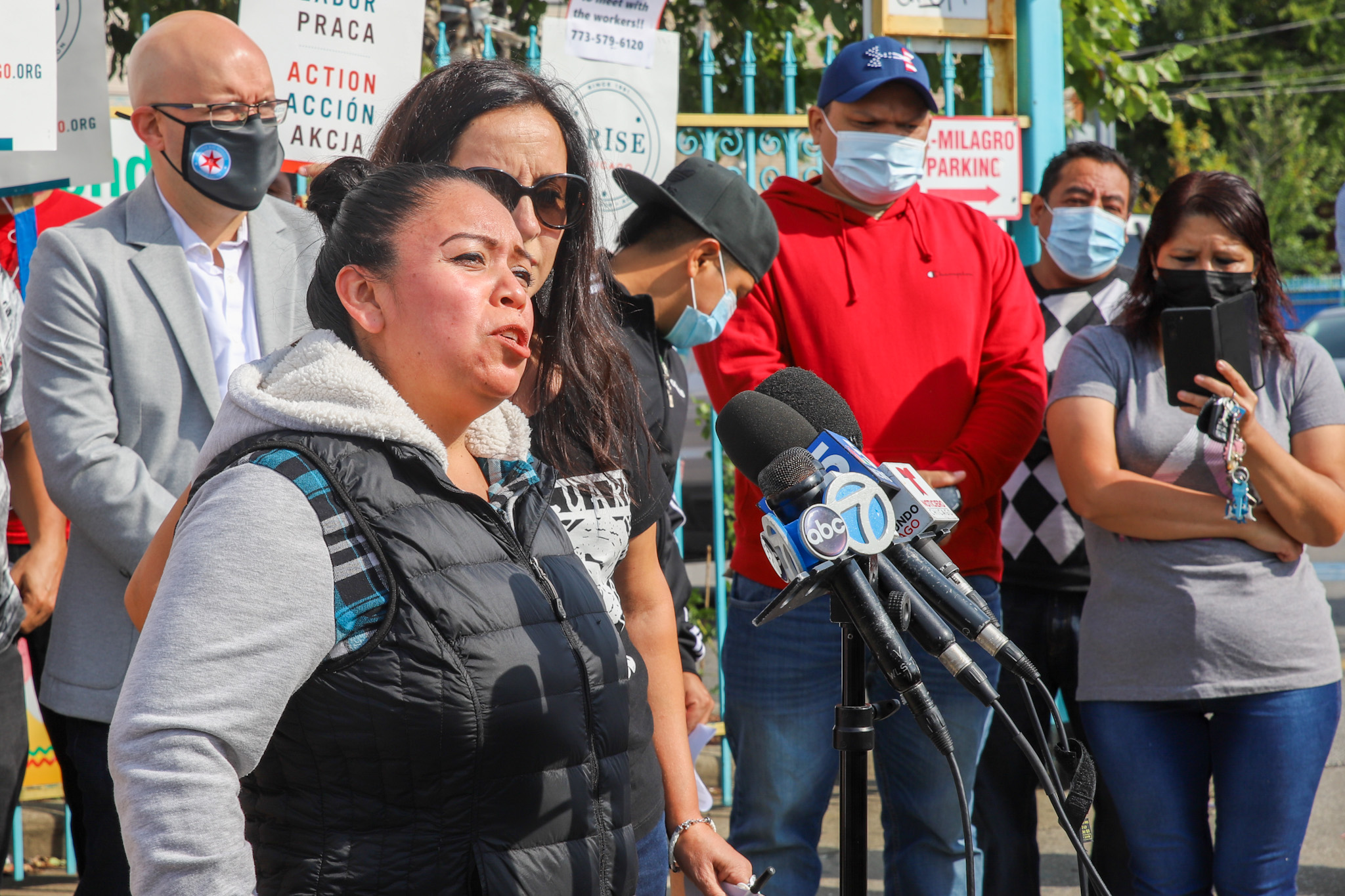 Irma Gonzalez has been working off and on for El Milagro. Pregnant with her third child, Gonzalez says “todos los días es lo mismo, el mismo estrés por la cantidad de producción que ellos solicitan con tan poca gente” — that “every day is the same, the same stress due to the amount of production that they request with so few people.” (Jocelyn Martinez-Rosales, 14 East).

“Now, my peers from the first shift were also going to walkout but they did not let them. They said there was a police officer by the door. It was threatening and intimidating,” said Gonzalez.

Police had to be called into the workplace and only then were workers able to retrieve their belongings. Workers left behind their car keys and house keys. Gonzalez says she left behind her medication. Additionally, the partner organization Arise Chicago filed a complaint with the National Labor Relations Board September 30 on behalf of El Milagro workers who’ve received threats of dismissal for striking.

El Milagro declined to comment on experiences shared by their employees when approached by 14 East and Pueblo, and have been tight-lipped to many other Chicago media outlets as well. On September 24, the company put out the following statement upon news breaking about tortilla shortages and the start of labor action at the plant:

“El Milagro Tortillas is a family owned business and proud employer in our community. We follow all federal, state and local employment guidelines. We value our staff and pay competitive wages.”

The COVID-19 pandemic has been rough for the workers and the communities they live in. Eighty-five workers contracted COVID-19 last year from which at least five employees have died from COVID-19 related illnesses. With 11,973 COVID-19 cases, the zip code which covers Little Village and North Lawndale has one of the largest numbers of COVID-19 cases in the state. 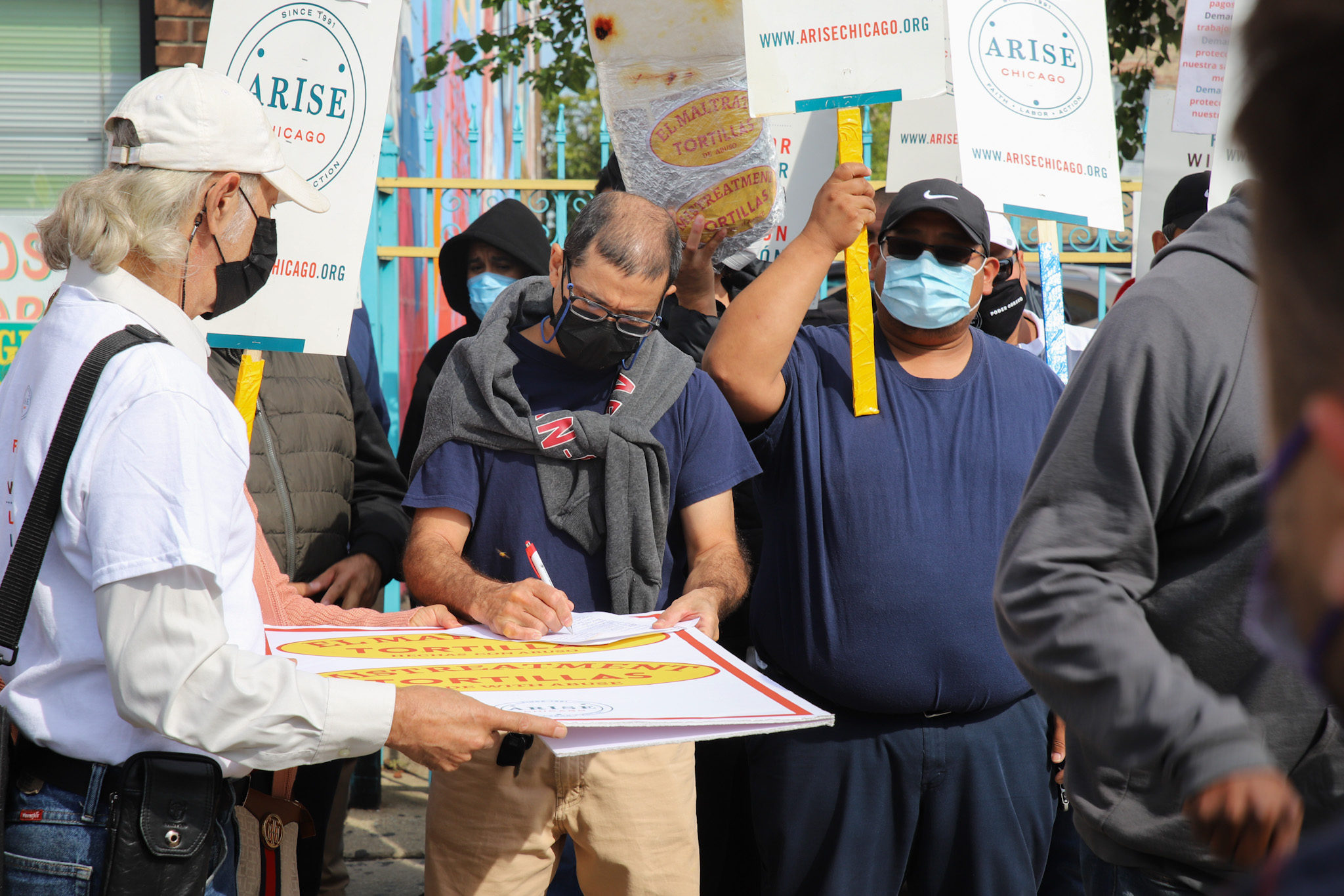 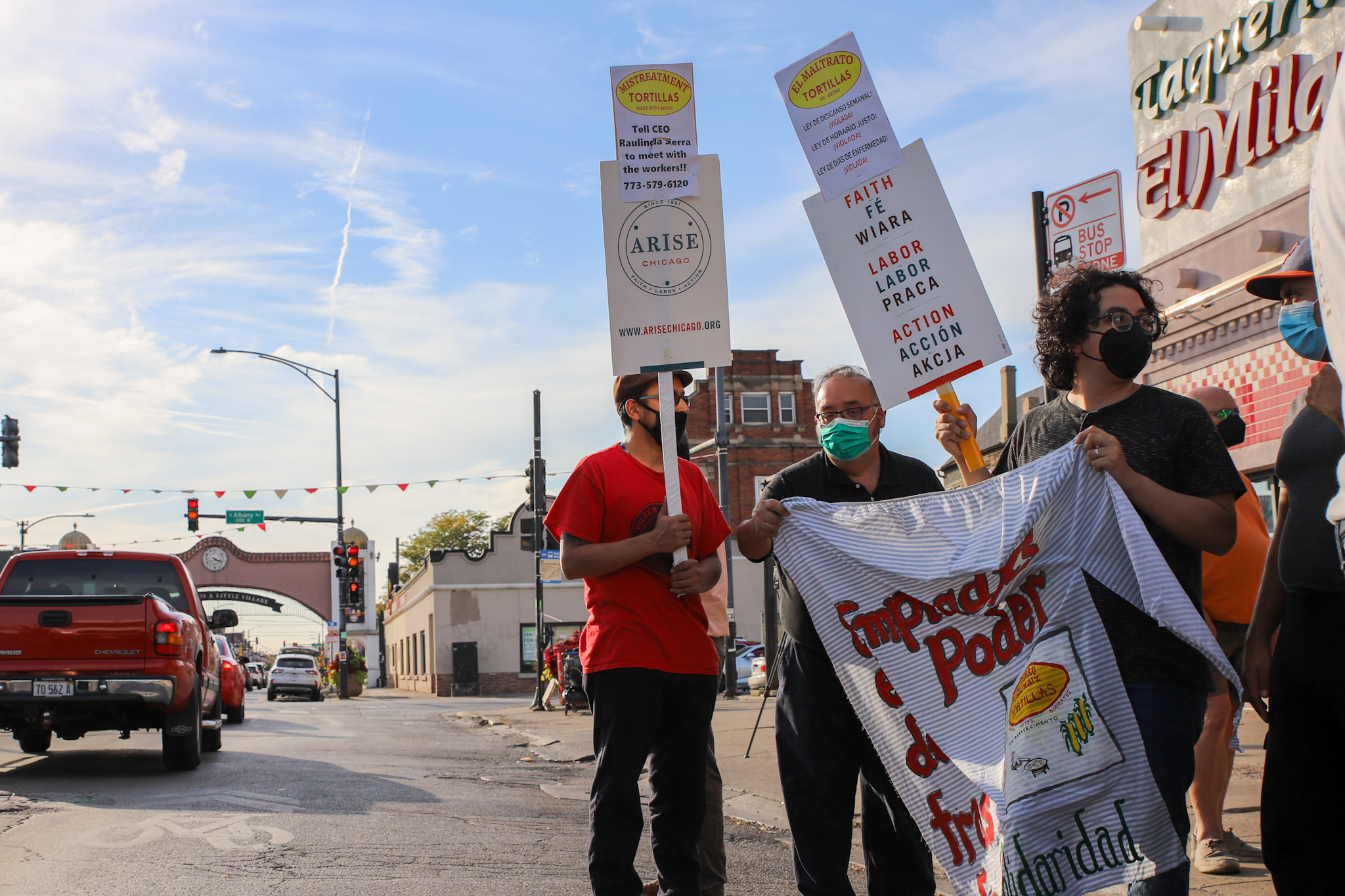 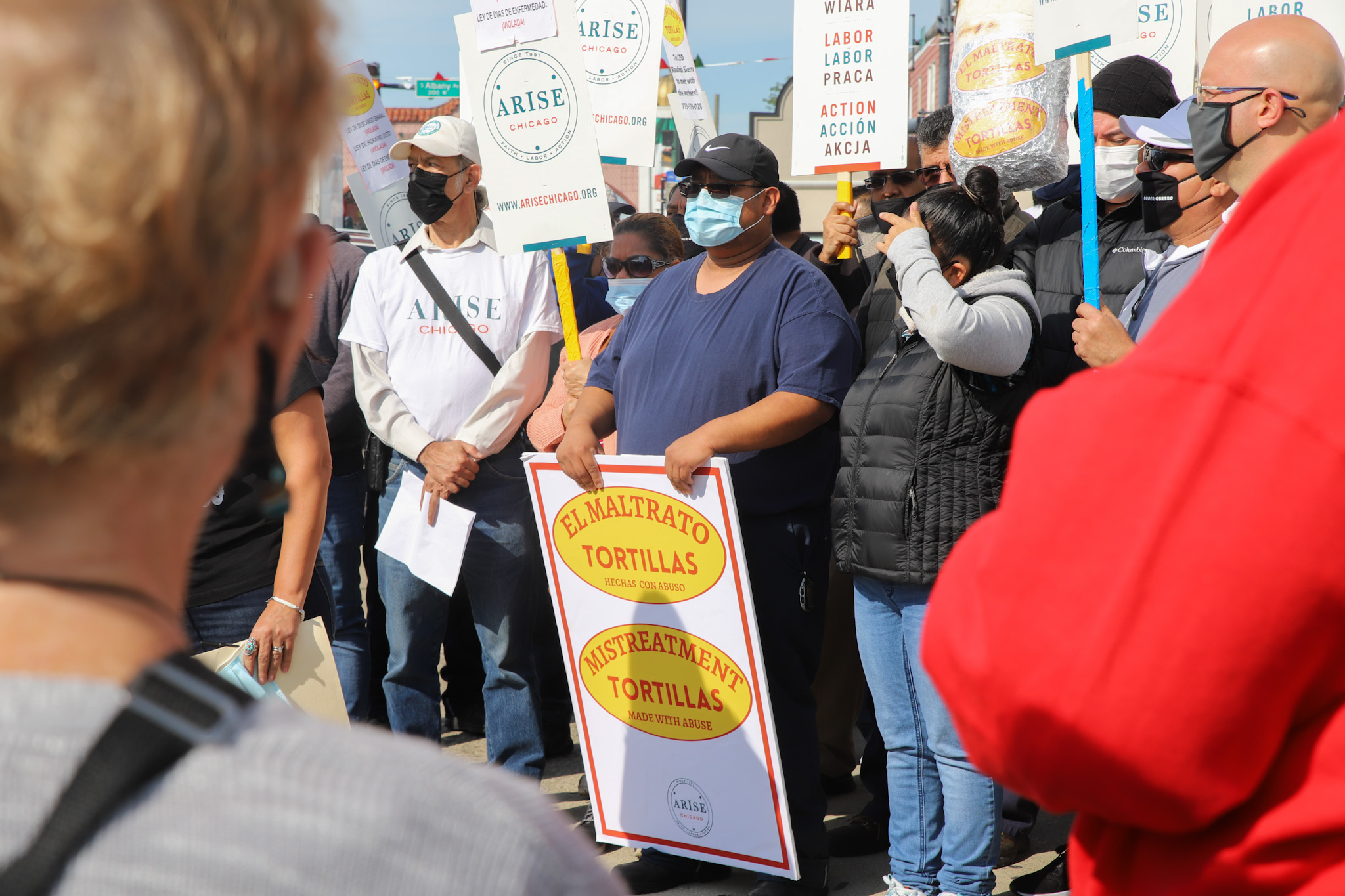 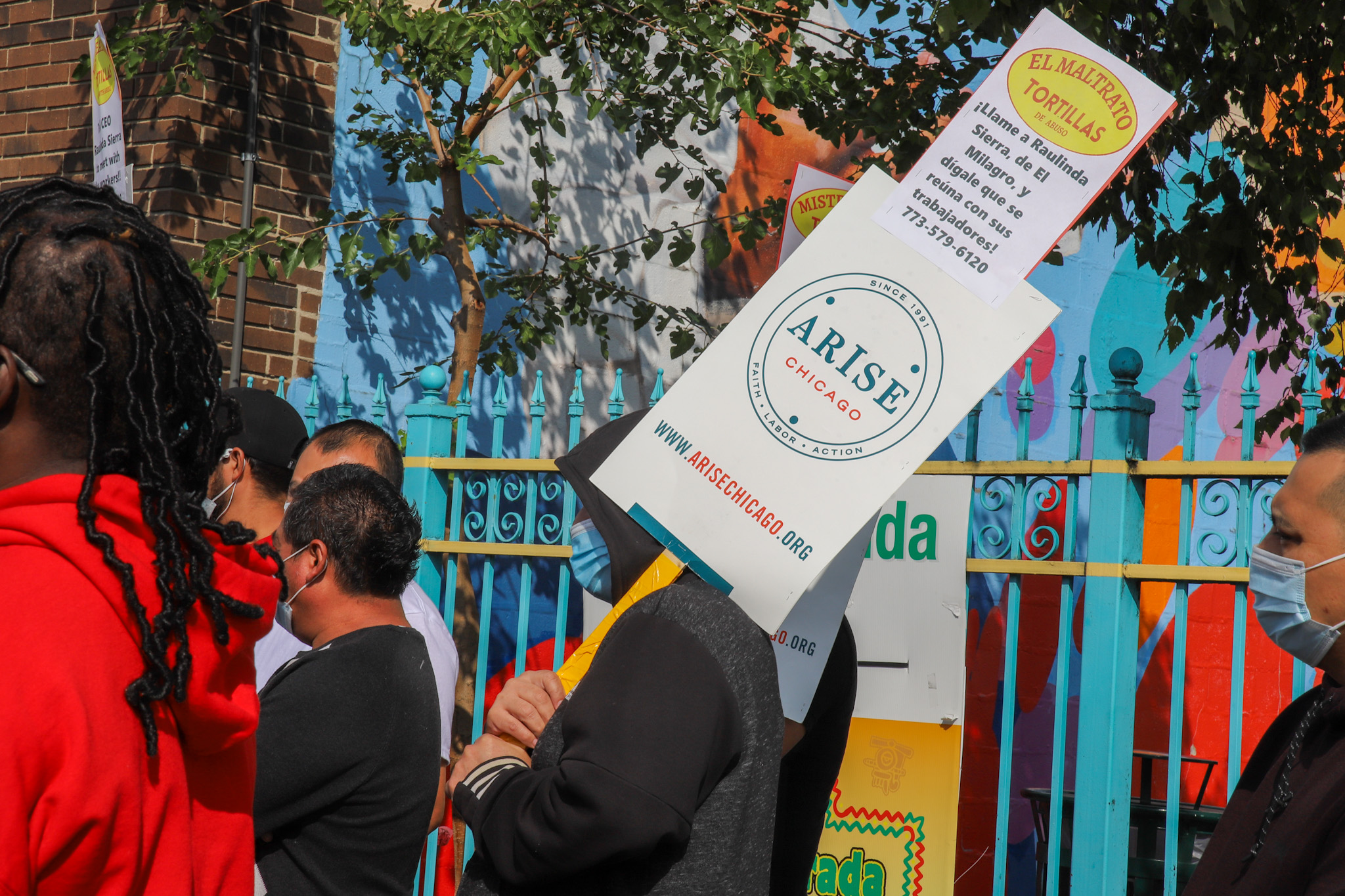 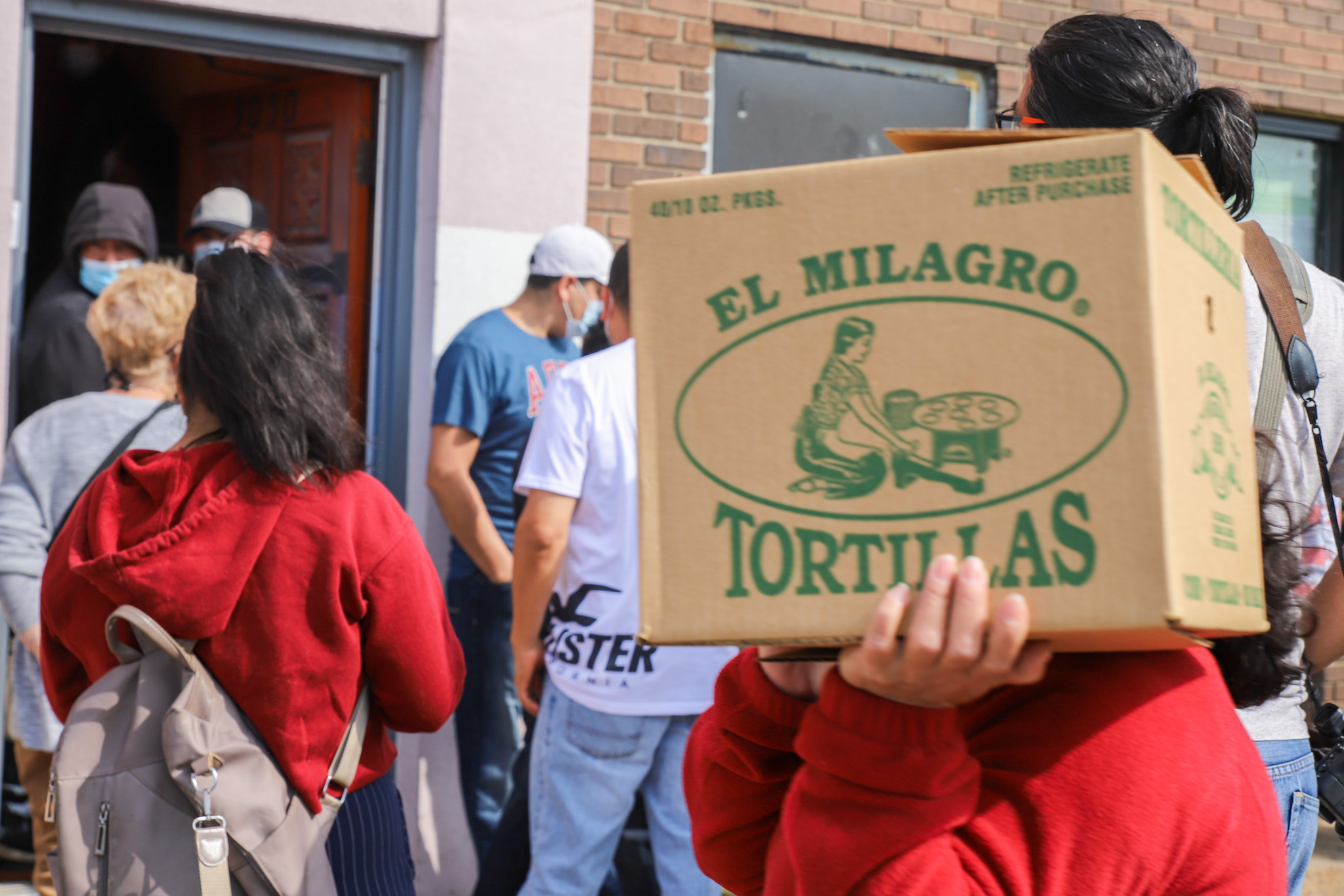 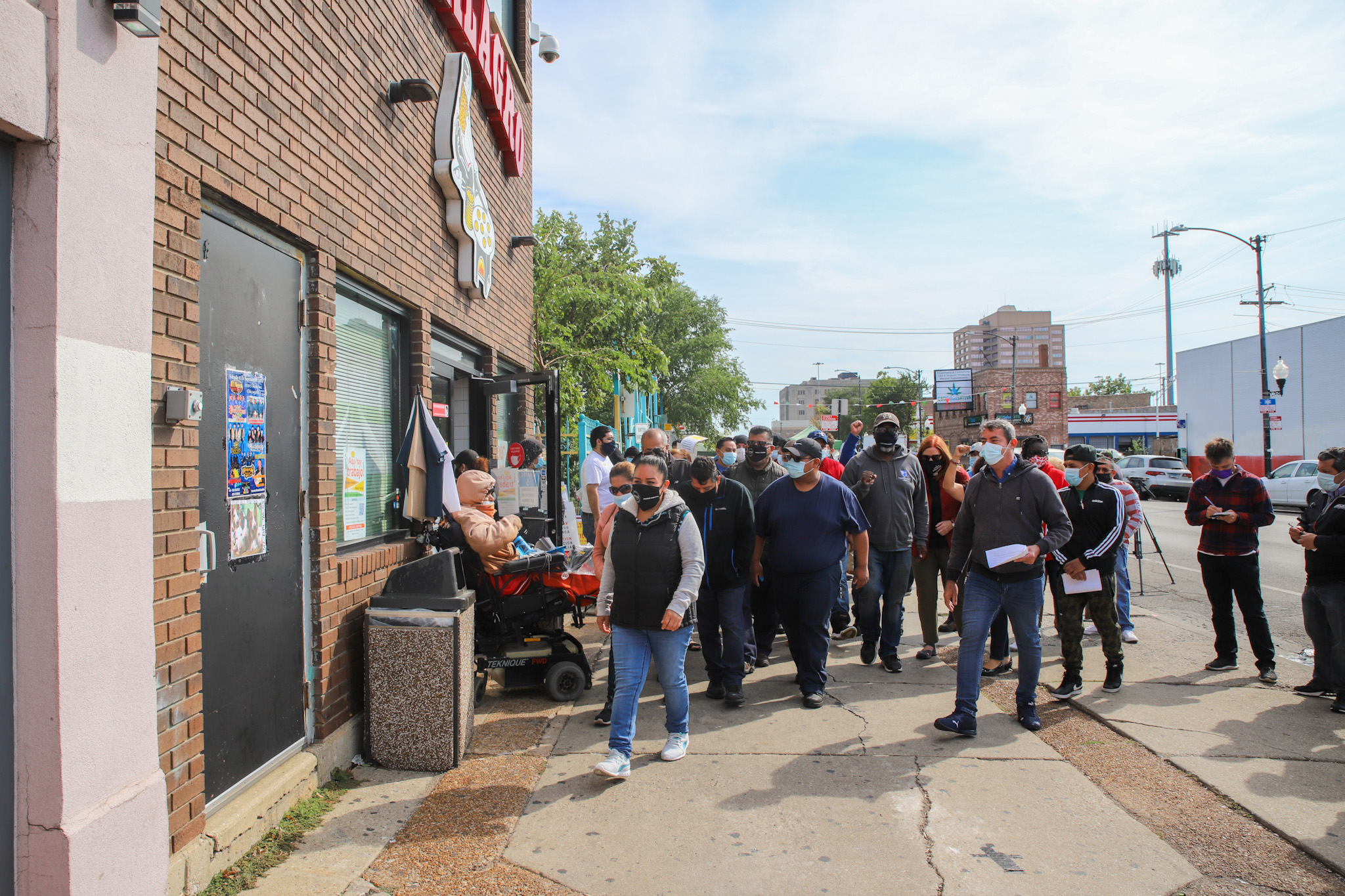 The walkouts have garnered much media attention. El Milagro tortillas have been a staple for many Chicago Mexicans and Mexican Americans who give the tortillas company much of its business.

“I grew up on El Milagro Tortillas,” said 11th district state Sen. Celina Villanueva at a rally on September 30. “It’s disheartening that our own people are treating us this way.” 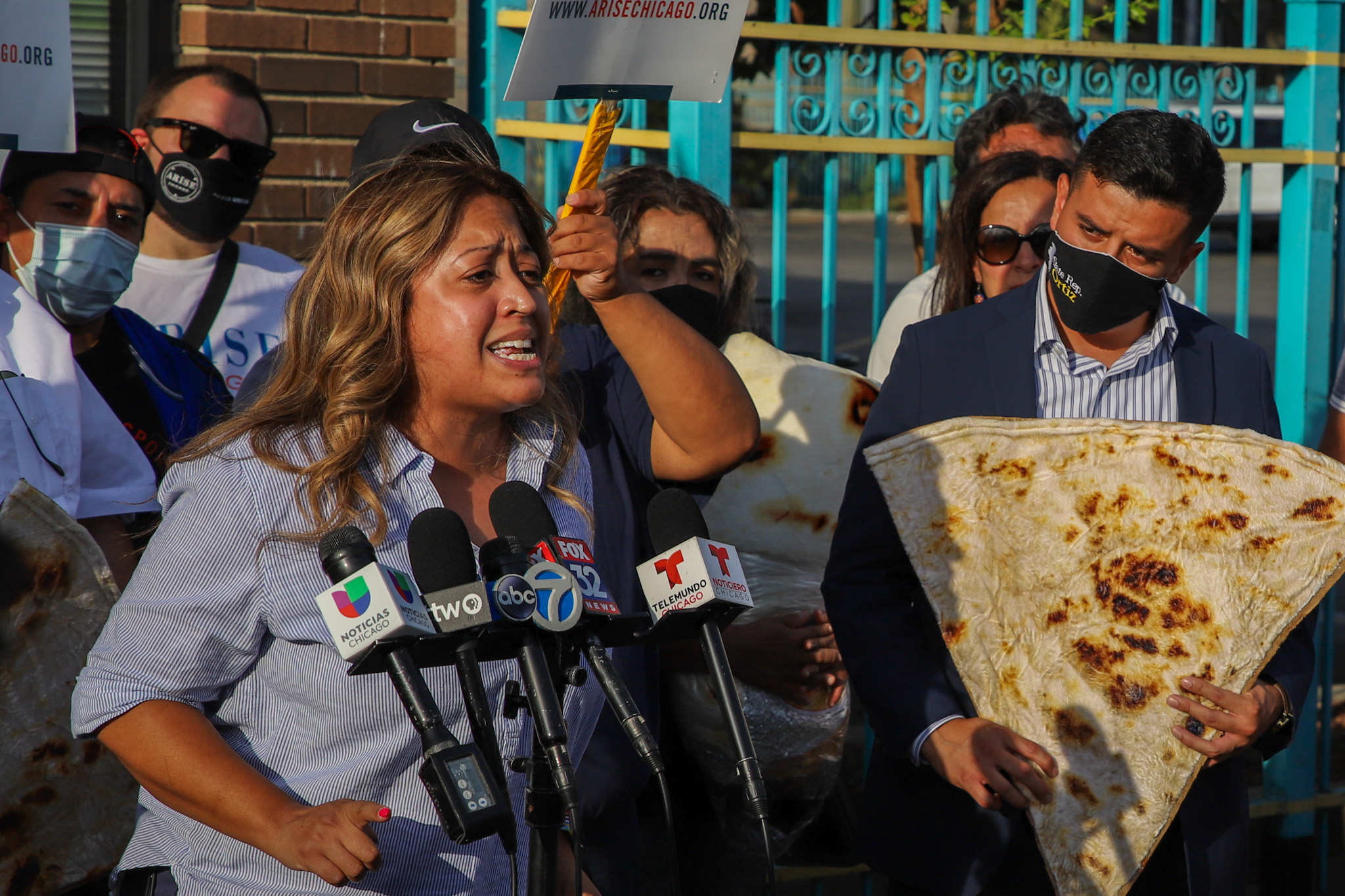 A similar sentiment was shared by 21st district state Rep. Edgar Gonzalez Jr., who apologized to the employees of El Milagro, “I ask for forgiveness and at the same time I say to you that we are with you.”

Word of the walkouts spread to social media where users have continued to call out El Milagro for its mistreatment of the workers.

El Milagro workers who have been organizing insist that they are not striking, nor are they calling for a boycott on El Milagro products. Supporters of the workers can help the organizers by signing and sharing their petition.

Irma Gonzalez reminds her fellow coworkers to remain fearless, “There is no reason for us to be afraid, the laws are protecting us. We are only fighting for our rights, don’t be afraid.”

Here’s a timeline to show how El Milagro and its employees have organized the past couple weeks and what they faced early on in the pandemic.

Illinois goes into a stay-at-home order.

El Milagro closes for two weeks after for deep cleaning.

El Milagro workers come into contact with Arise Chicago. Jorge Mujica, an organizer for Arise, said problems of “overcrowding and bad conditions were there (at El Milagro), but COVID was more important.”

According to their website, Arise Chicago “builds partnerships between faith communities and workers to fight workplace injustice through education, organizing, and advocating for public policy changes.”

Arise is standing in solidarity with El Milagro workers who are walking out on the job asking for better working conditions.

Investigate Midwest puts out a report on the number of COVID outbreaks in Illinois workplaces. El Milagro has 85 cases of COVID as of September 30, 2020. The year old data has been cited by other publications including 14 East; no one, including Arise Chicago, has updated data for COVID-19 cases for El Milagro employees.

A Freedom of Information Act request to the Illinois Department of Public Health sent by 14 East came back saying the department does not keep track records of COVID-19 cases for El Milagro employees.

El Milagro tortilla shortages come and go throughout the year.

Workers organize to walk out of work after a couple hours in. The workers leave a letter to their boss saying they have demands that will make their job better.

At 6:30 after a two-hour walkout, workers tried to get back to work but were locked out from the 21st street plant. Police escort workers into the factory so that workers can get their belongings.

El Milagro workers meet to clock back into work the next day after being told they need to report back in with Human Resources. Arise Chicago, local elected officials and a field representative from the Chicago Teachers Union are present to support the workers 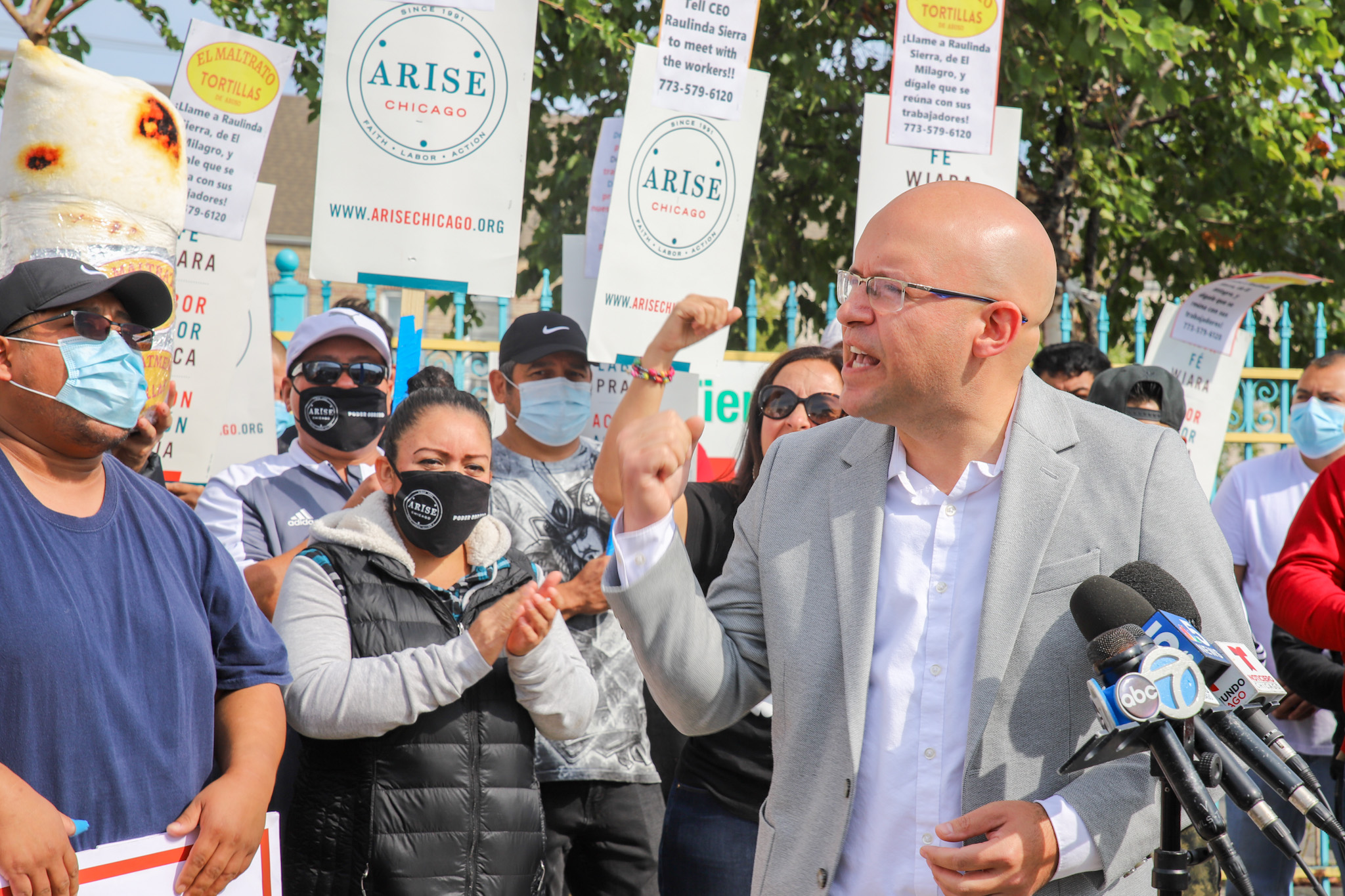 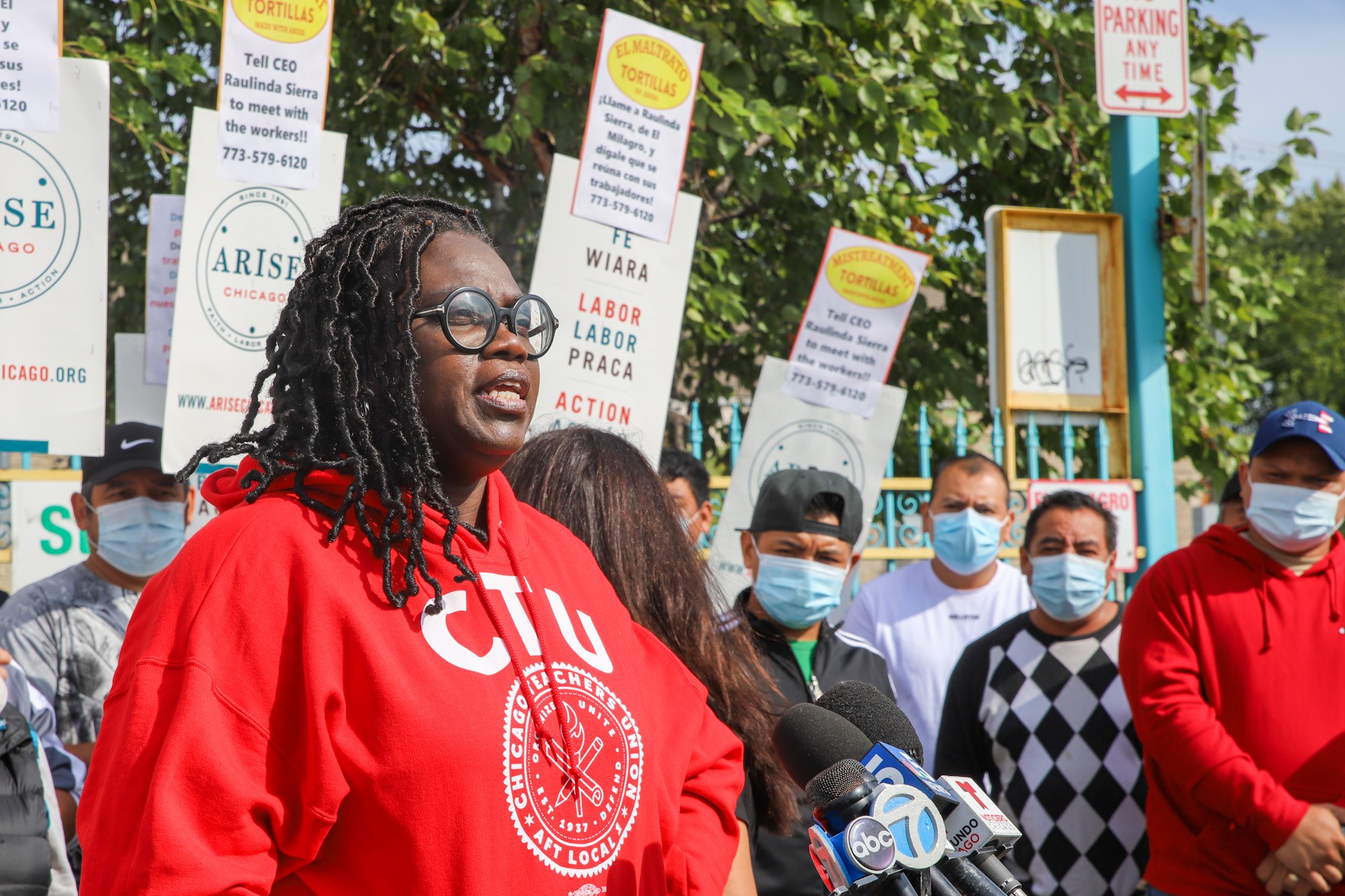 Workers are processed one by one by Human Resources and are able to return to work later into the day.

Workers told their bosses that they wanted their demands to be met by September 29.

El Milagro workers have not had their demands met and are still not negotiating with their bosses. A rally is called in support of the workers. More elected officials come to give their support to the workers.

El Milagro workers file a formal complaint against their bosses to the National Labor Relations Board. The complaint says “El Milagro is intimidating and threatening workers after several concerted protected activities, trying to impide further organizing to improve their working conditions.” 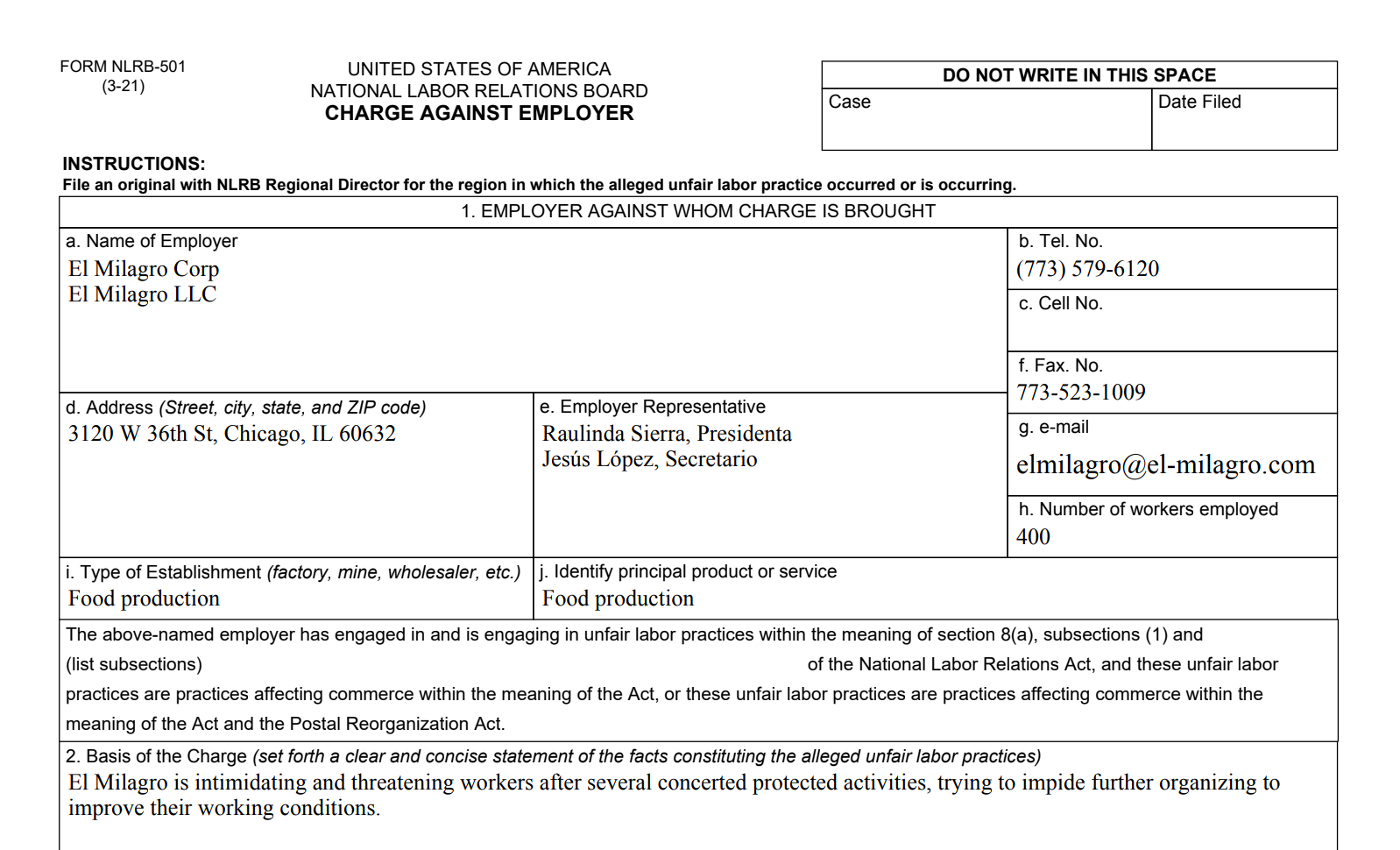