Spirit of The Game: How Ultimate Frisbee is a One-...

I Am An Athlete

Spirit of The Game: How Ultimate Frisbee is a One-Of-A-Kind Sport 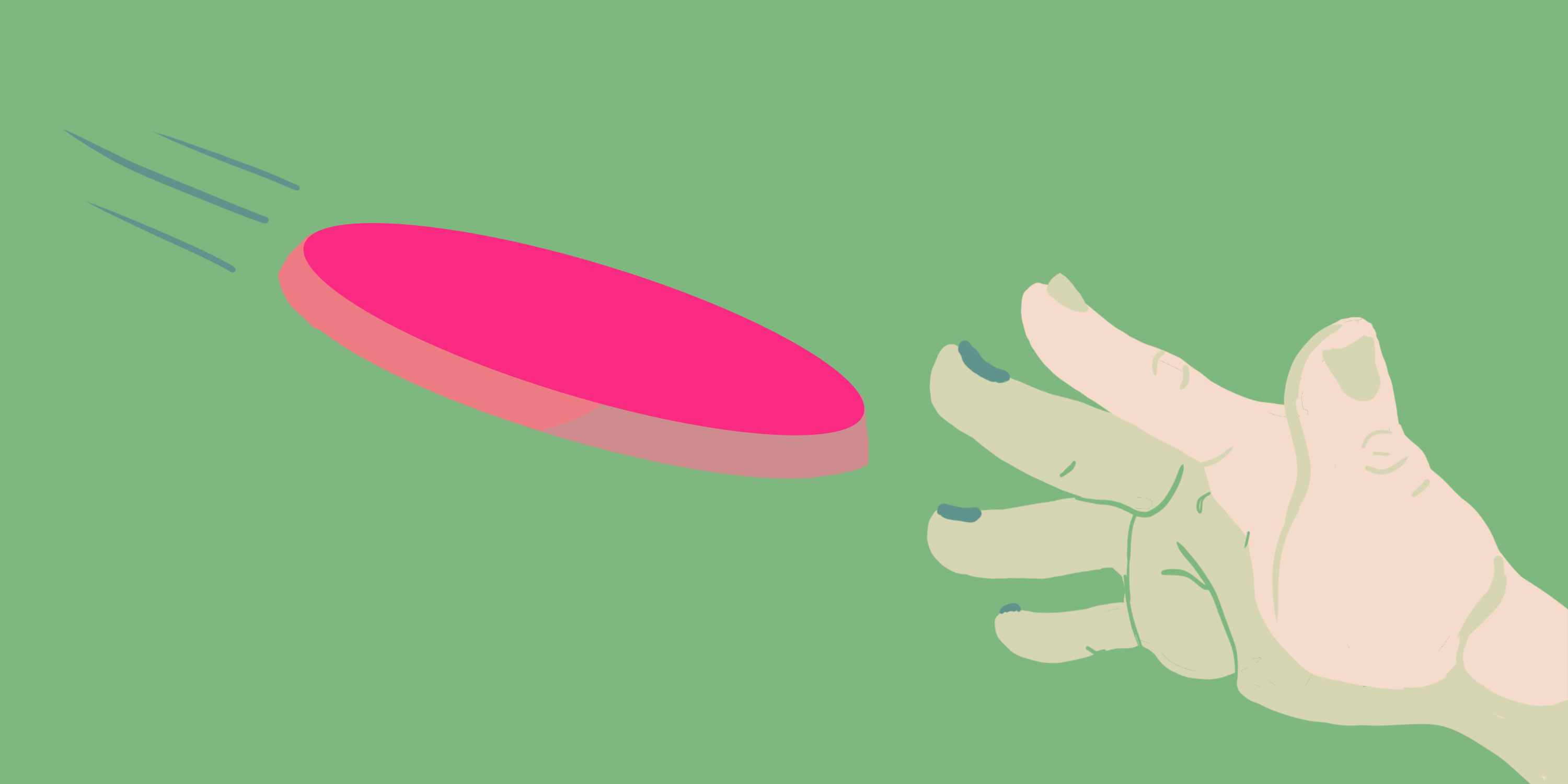 “It rejuvenates your spirit”

On the day of a big game, especially at the college level, one can only imagine the intense pressure put upon athletes. The players’ top priorities and expectations are to use every ounce of strength to beat their opponent and win. Enjoying themselves during the game is a minor, secondary priority to claiming victory.

Everyone comes out with the goal to conquer. Screaming, jokes and banter are exclusively reserved for spectators and those off the field of play — that is, unless you’re an ultimate frisbee player. 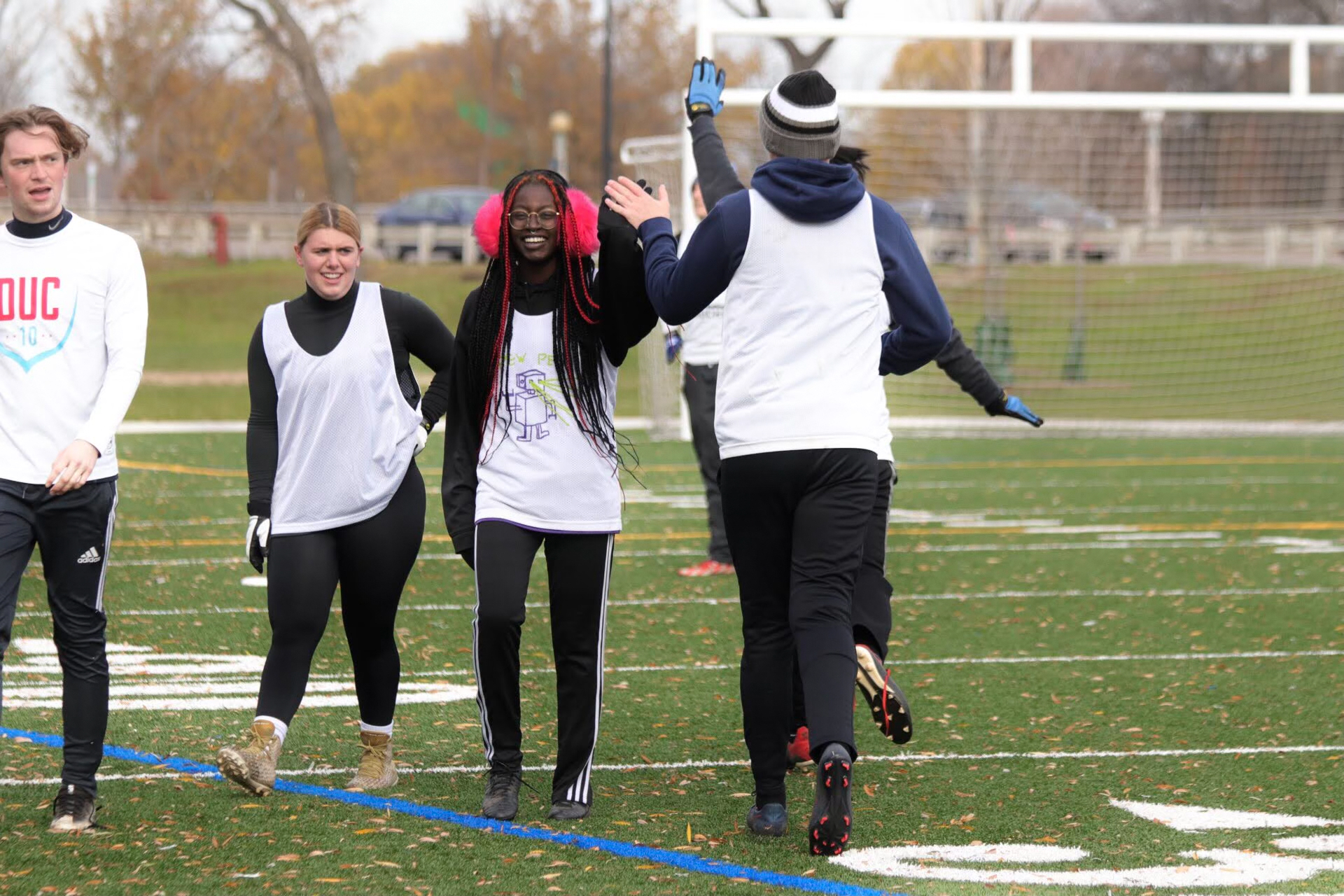 Avital Harris (left) and Esther Ajayi on the field during a Friendsgiving scrimmage between DePaul’s womxn and men’s ultimate teams. Photo courtesy of Isabel Perkinson

In many sports, the opposing team is often seen as an enemy. For ultimate frisbee, however, it is quite the opposite. Players make an effort to connect with the other teams and even root for them.

“At the end of a point, no matter who scores, you high-five the other team. That’s not something I’ve ever experienced in any other sport,” said Kamille Barrett, co-captain of DePaul University’s womxn’s ultimate frisbee team, the Laser Chains.

Positivity and enjoyment are built into the sport with the overarching term “​​Spirit of the Game.” This principle is a cornerstone of ultimate, with the term etched into the official rulebook.

According to the USA Ultimate (USAU) rulebook, “Spirit of the Game places the responsibility of fair play solely on the athletes themselves by requiring each player to know the rules and make their own calls, without the help of a neutral official. These underlying principles reinforce mutual respect and trust between opponents – both on and off the field of play.”

Athletes following rules that heavily emphasize sportsmanship make it possible for ultimate to be self-officiated. With no referees, players regulate the game themselves. This honor system is one of many aspects of the sport that makes it so unique.

Sometimes, the DePaul womxn’s team has “screams” after cheers or during games. “Maybe we’re getting on line or getting ready for the next point, and someone will start screaming and then everybody else starts,” said Esther Ajayi, co-captain of the Laser Chains at DePaul. Sometimes, the team will gather in a circle and yell at the top of their lungs. “It really helps [teammates] release the nerves. It helps you get excited,” Barrett said.

At the end of each game, players on both teams gather in a Spirit Circle, highlighting extraordinary plays and noting what one team appreciates about the other. Then, a spirit captain picks members of the opposing team and rewards them with “spirit prizes” like juice boxes or stickers. 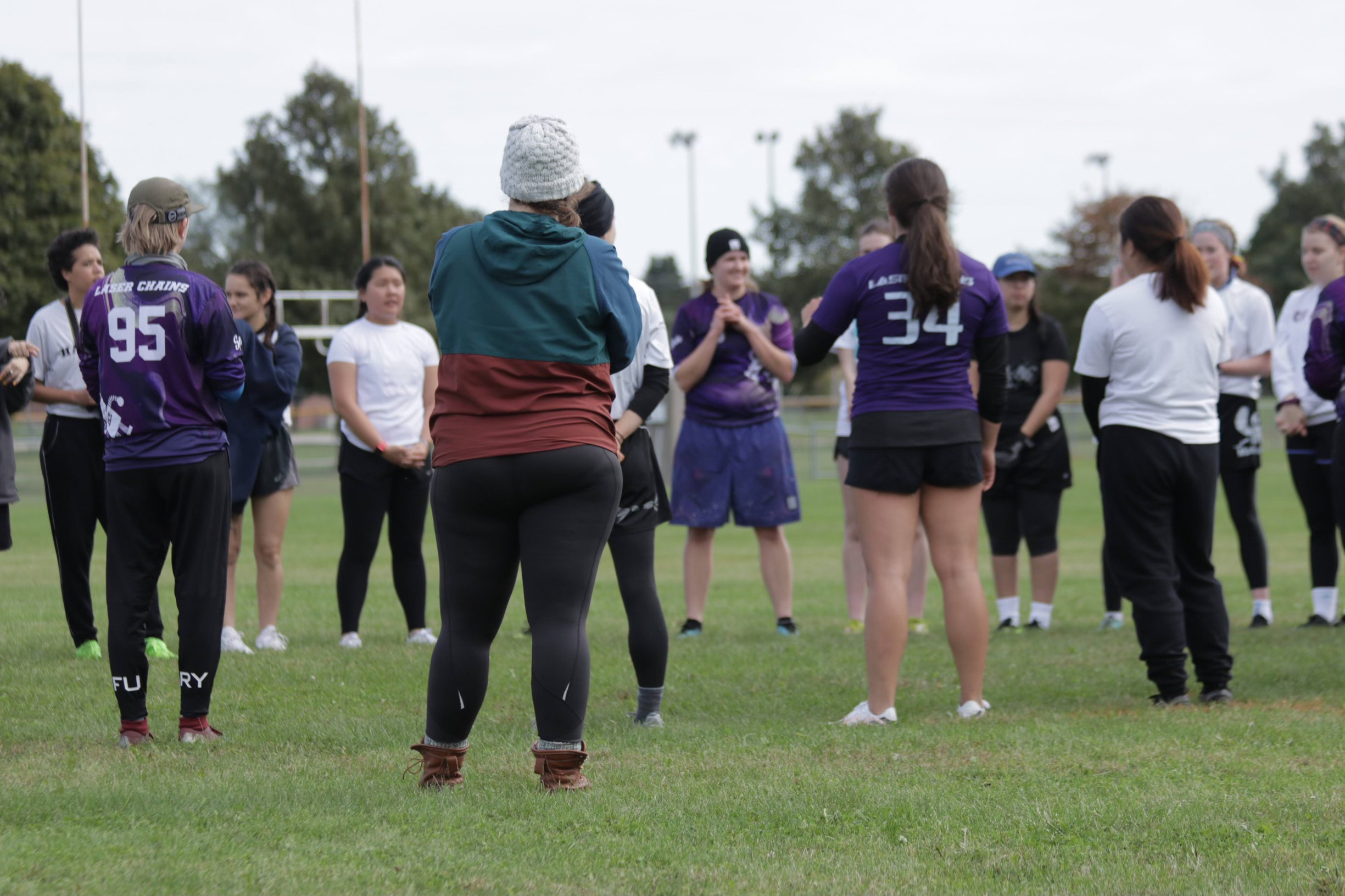 DePaul (purple) and Loyola (white) gather in a Spirit Circle after a game during sectionals. Photo courtesy of Isabel Perkinson

Interesting rules and traditions aside, the inclusive environment the athletes create truly distinguishes women’s ultimate from other sports. Barrett describes ultimate as a more welcoming atmosphere compared to other sports they played in the past.

Ajayi describes this receptiveness towards the LGBTQ community as a magnetic effect. “I’ve never really seen such a queer-based team. It’s really nice to feel welcomed. It’s a great opportunity to be in that community,” Ajayi said.

“Chicago ultimate, at large, is pretty inclusive of the LGBTQ community,” Barrett said.“We’re in a city, so there’s more LGBT folks. [Cities are] just generally more of an inclusive environment than perhaps if we were in a rural college area.” They say DePaul Ultimate strives to be as inclusive as possible.

Sarah Johnson, captain of Northwestern University’s women’s ultimate team, said that her team has had a significant and steady LGBTQ presence for a while. “I know that this [Northwestern] team has been queer for pretty much the entirety of its existence.”

“Ultimate made me feel like there are people around me that identified in a more similar way as I did.”

“Women’s ultimate in college has a more outward queer acceptance, and I think that’s really great,” Johnson said. She said she finds comfort in this environment as well.  “[Ultimate] made me feel like there are people around me that identified in a more similar way as I did.”

Although these players testify to the sport’s inclusivity, women’s ultimate is no exception to critiques or flaws.

In the summer of 2019, Johnson played ultimate with a transgender woman who had transferred onto her team halfway through the season due to experiencing transphobia on her previous team.  At the time, USAU held a rule that if a transgender woman were undergoing hormone treatment like testosterone suppression, they could not mark up (defend) against the players they were most comfortable with — until that player was twelve months into their hormonal therapy. The player on Johnson’s team was about seven months into her hormonal treatment, according to Johnson.

However, under USAU rules, there is a Captain’s Clause that says if all captains across both teams agree, then they are allowed to overrule a broad-set rule for that game. For that summer, Johnson, along with other co-captains, would approach the opposing team before every game and ask if their players were comfortable having their transgender teammate mark up against other female players.

Some teams agreed, while some teams refused. According to the USAU rules at the time, either response was appropriate. “That was a really difficult summer for [my friend],” Johnson said.

As of December 2020, the rules changed. Now, regardless of hormonal therapy or treatment, players are able to mark up against who they feel most comfortable defending.

“On a more organizational, authoritative level with USAU, we’ve seen positive changes and more acceptance towards the LGBTQ community as a whole,” Johnson said.

Additionally, Johnson discussed other outstanding issues within the sport that have yet to be resolved. “We tend to not be a sport funded by our school in any significant way,” she said.

At Northwestern, players pay their dues entirely, which can be a steep expense. 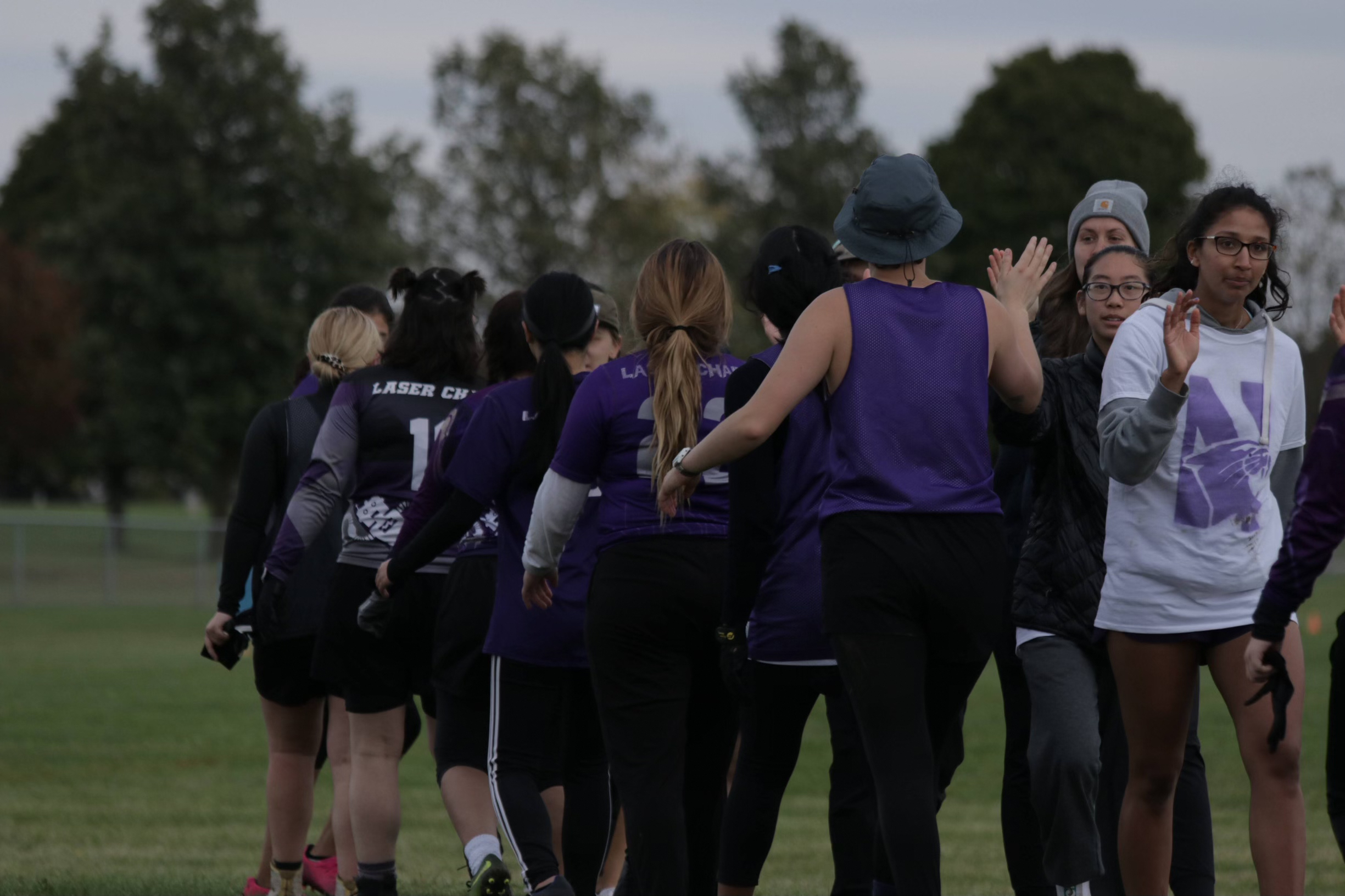 DePaul womxn’s and Northwestern women’s teams lining up to high five after a game during sectionals. Photo courtesy of Isabel Perkinson

“It’s not always the most accessible,” Johnson said. She said that the accessibility issue may have a trickle-down effect as to who is attracted to the sport. Limitations like high fees can cause a concentration of players from more affluent and white backgrounds to join. “You might then see a saturation of particularly white people that play college ultimate.”

“When you get into those issues of accessibility, it becomes less diverse,” Johnson said. “Frisbee is just not racially diverse – college and upwards. That is pretty firmly true.”

However, Johnson says that a huge factor is which program a player is in, as some programs are racially diverse.

“There’s also a lot of dialogue about how to make our sport more racially diverse. I think that the sport is changing in a positive way. I don’t think that it’s stagnant or being impacted negatively over time. There are truly people putting in a lot of effort to make things better,” Johnson said.

Although there are outstanding accessibility and racial concerns within the sport, Johnson said that the sport is still approachable on many fronts. “All that to say, I think ultimate is welcoming, and I think there is an attitude that regardless of what level you play at, you have opportunities to play.”

Although women’s ultimate may not be as widely acknowledged as other sports on the college level, many athletes find this beneficial. “The fact that there’s so much flexibility within ultimate itself because it is not a hugely established sport compared to other sports I think makes it extremely unique,” Johnson said.

Barret described the DePaul team as a very fun environment. “We very much encourage people to be themselves, and I love that. It’s so fun when you get to be yourself around other people being themselves,” Barrett said. They say the general friendliness within the sport makes the game more fun. 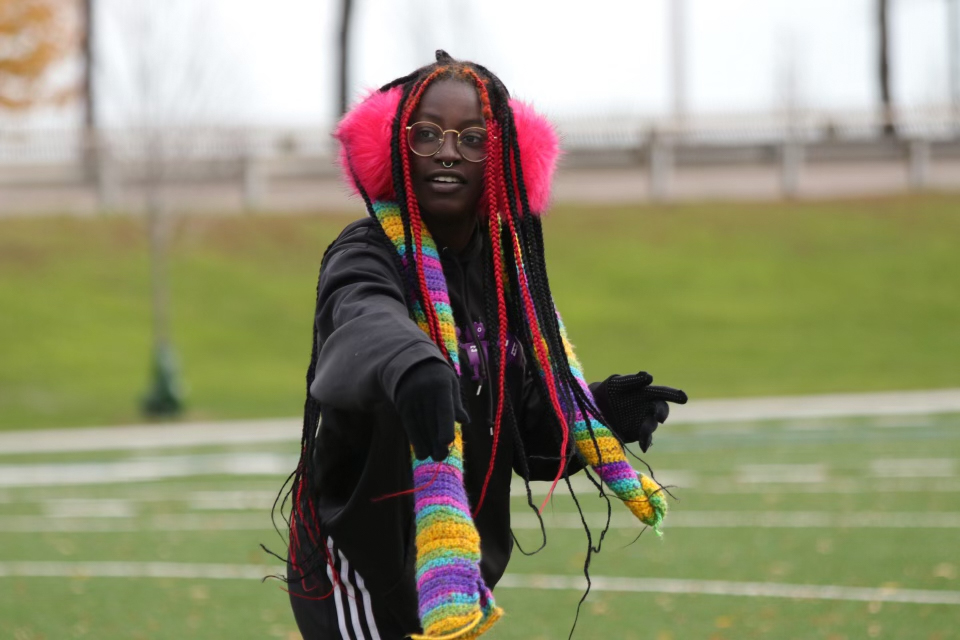 Esther Ajayi on the field during a Friendsgiving scrimmage. Photo courtesy of Isabel Perkinson

Ajayi said that they appreciate the DePaul team’s solid balance between acting goofy and being serious during games. “If it’s like, ‘Hey, Garbage Chicken is cutting next.’ Then, we understand that Kamille is cutting next,” Ajayi said, noting that they all have funny nicknames.

Ajayi and Barrett both emphasize spirit in their colorful descriptions of their team’s atmosphere.“I really appreciate the competitive but also spirited environment,” Barrett said.

Ajayi feels grateful to have a tight-knit team. Having people around them, competition or not, allows her to feel energized. “It rejuvenates your spirit.”

All three all mentioned that the closeness of their respective teams makes the sport especially extraordinary to them.

“The camaraderie across the program as a whole … is really quite special,” Johnson said.