How COVID Changed Them: The Pandemic’s Impac...

How COVID Changed Them: The Pandemic’s Impact on DePaul Athletes’ Sense of Community and Identity 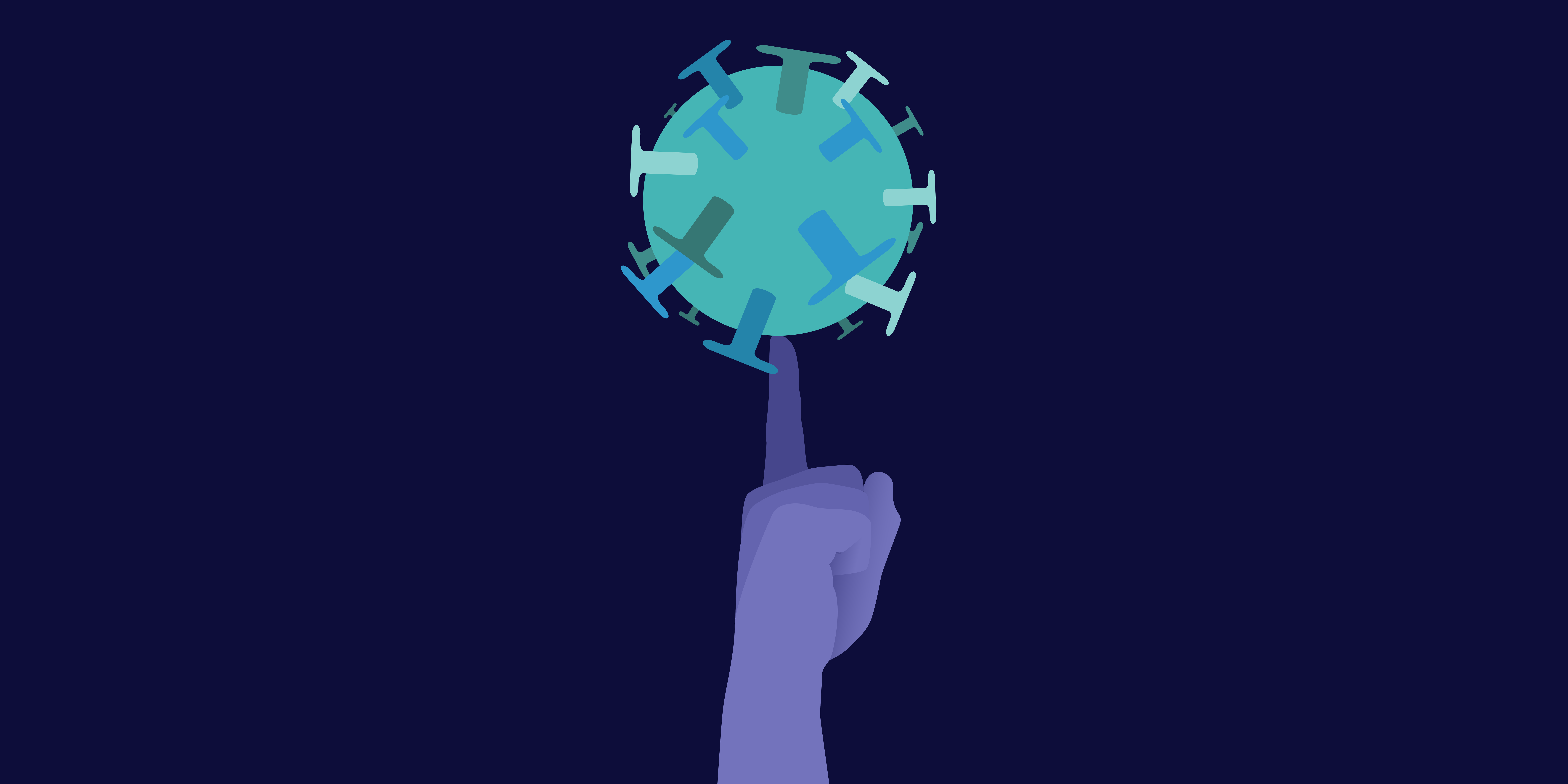 This piece has interactive audio elements. Click or tap the text highlighted in grey to immerse yourself in the story.

During the COVID-19 pandemic, student athletes across the country were affected, with canceled seasons, altered team dynamics and changes to the ways they play, practice and compete.

Now two years into the pandemic, student athletes at DePaul are reflecting on this transformative period, noting the changes to their personal identities and the importance of their athletic communities during trying times.

Here are the experiences of three DePaul athletes who know intimately what it’s like to be a collegiate athlete living and competing during a global pandemic.

“I think that it’s been a real struggle.”

Sophomore Gandhi Cruz came to DePaul as a freshman during the height of the COVID-19 pandemic in the Fall of 2020. Like many student athletes, he was forced to adjust his expectations and adapt to new challenges.

“We didn’t really get to experience our first full year. It was definitely a lot different than everybody thought it would be,” Cruz said.

Because of the pandemic, the NCAA delayed the start of Cruz’s freshman season. The season, which typically would have started in August 2020, was pushed back until February 2021.

This delay meant months of additional preparation, with the team training and practicing for their season in the fall and winter.

Cruz, however, saw this as a positive.

“With it being pushed back to the spring, I think it helped us a lot, especially grow as a team and get to know each other.”

Getting to know his teammates was especially important for Cruz, as a new member on the squad and the team’s goalkeeper.

Even so, he says at first it was a challenge to build that trust with his team.

“It’s a little difficult just because of the fact that the guys don’t really know what I’m bringing to the team. So it was hard at first because obviously I’m an incoming freshman and they had a four-year start, so it’s hard to gain their trust.”

Because of this, Cruz made it a priority to connect with his teammates off the field in order to build trust on the field.

With all the new challenges brought on by the pandemic, the soccer standout says his team rallied together, supporting one another when they needed it most.

“This is a really generic quote, but … you don’t know what you have until you lose it.”

Notably, Cruz attributes the team’s success this year to the relationship between his teammates.

“We all came really close together, and I think that was one of the biggest reasons why we were able to improve this season.”

But his biggest takeaway from the pandemic? Because Cruz was unable to play soccer competitively for a while, the time away only made his love for the game grow stronger.

“I think that the importance of soccer really came back to me just because of the fact that I went several months without being able to play. This is a really generic quote, but … you don’t know what you have until you lose it.”

“The DePaul athletics community at large, I think we’re still trying to bounce back.”

Mollie Eriksson is a neuroscience major and a senior on the women’s soccer team at DePaul. Two years into the pandemic, she believes the culture of DePaul athletics still isn’t the same as it was before COVID.

Like many, at the beginning of the pandemic, Eriksson says she felt scared, stressed and confused given all the uncertainties.

Eventually, though, the women’s soccer team did have a season. Like the men’s team, the season was pushed back until the spring for the 2020-2021 academic year.

However, because of COVID, there were some striking adjustments. The team had to wear masks when practicing, test regularly and social distance.

“It was not even remotely the same. In the grand scheme of things, I don’t even consider it a real year.”

To limit gatherings of large numbers of people and help with contact tracing, Eriksson says the team was split into small groups they called pods.

These pods were isolated to the company of one another, eating, practicing and training together.

Though she understood the need for this, Eriksson says the separation put a strain on the team.

“We are extremely connected and we have great team chemistry, and I do think that was a small component that was lacking last year, and I am 100% blaming it on COVID.”

Erikkson, who also is the team’s goalkeeper, believes the lack of social interaction impacted the team’s synchronicity on the field.

“I think I value it more than I ever did. I value my relationships with my teammates. I definitely took things for granted before COVID, and so now I don’t.”

“There’s this aspect of trust, and you build that trust through interaction and you can’t facilitate that in any other way. So those components were really missing. I think teams all over the country were experiencing that.”

Despite these setbacks, Eriksson says the pandemic made her realize how grateful she was to be a part of DePaul athletics and just how much she valued the community within her sport.

“I think I value it more than I ever did. I value my relationships with my teammates. I definitely took things for granted before COVID, and so now I don’t.”

As much as she loves soccer, Eriksson says she’s also thankful that the pandemic forced her to look elsewhere for fulfillment.

“My dream has always been to play professional soccer, but the pandemic maybe showed that I have other goals as well. Soccer wasn’t the only thing I could focus on, so it allowed me to kind of look into other things.

“Admittedly, I’m kind of going through, I wouldn’t say an identity crisis, but I’m struggling a little bit with the idea that soccer might be over soon because that is the biggest component of my identity. But since COVID I’ve realized that there are other aspects of my identity like I’m not just a student athlete, I want to pursue a career in medicine.”

Though she’s grateful the pandemic has forced her to find new passions and pursuits, Eriksson still acknowledges that soccer will always have a place in her heart, and being a student athlete will forever be a part of her identity.

“I think I hold that student athlete thing so close to my heart because it’s brought me so much happiness. It’s a really salient part of who I am and I can’t picture a life without it.”

When COVID-19 first swept across the country in 2020, Tripp Tuff was a senior at DePaul. A player on the men’s tennis team, Tuff thought his final season was coming to an end without a proper conclusion.

“It was a big shock initially,” says Tuff. “Because I was a senior, I wasn’t sure what the future was going to look like if we were even going to be able to come back and finish.”

But in March 2020, student athletes across the country received the news that the NCAA would grant them an extra year of eligibility.

For Tuff and his teammates, this was incredible news, because they had unfinished business on the court.

“We hadn’t won a Big East championship in my first four years at DePaul, so we kind of felt like we never really finished the job that we came here to do. It was a huge letdown, obviously, with COVID that we weren’t able to. But then when we got the opportunity to come back, I think we were able to continue with that goal.”

But because of the pandemic, there were still many hurdles for the team — and distance was one of them.

“It was interesting for our team because we have a bunch of Europeans on the men’s tennis team, and everybody went back home. So, we spent a lot of time away from each other.”

“It was strange because it was the first time in like four years that I’d been away from my team for that long. So, it definitely felt like I was losing a part of myself.”

For Tuff, this distance from his teammates was a wholly new experience.

“We had always been super close. We lived together in dorms for the first two years of our time here, and then we lived off-campus in an apartment together,” he says. “It was strange because it was the first time in four years that I’d been away from my team for that long. So, it definitely felt like I was losing a part of myself.”

But Tuff says the team did the best they could at maintaining a relationship even across the sea.

“Everybody was doing everything that they could to make sure that we would be in the best position to win the Big East Championship when we came back. And it paid off.”

After their fall season was canceled, in the spring of 2021 the DePaul Men’s tennis team was finally able to compete once again.

That season ended in victory, with the team winning the Big East Championship.

Tuff, now in his sixth year, is pursuing his master’s in public health at DePaul. As a team leader, he says his goal is to try and maintain the winning spirit they’ve built over the last few years.

“We’ve been talking a lot about different ways that we can try to lead this team and redirect this team into that championship culture. We’ve tried to really just continue that team-lead standard and that mentality so that we can continue to be successful as a team.”

In his final year of eligibility at DePaul, Tuff says he’s learned to soak up the time he has left.

“Because it is my last year now, I definitely have shifted my perspective on court to enjoying the experiences and enjoying the practices a lot more and being a lot more present. In the past, I’d always be focusing on ‘I got to work on this, I got to do this,’ and all the little details and whatever. The pandemic forced me to really slow down. And I was able to really just kind of take in and enjoy my time on court and with my teammates a lot more.”

After he graduates, Tuff will be pursuing a career in public health — a decision he says was motivated by the pandemic.

“Pre-pandemic, I was pre-med, hoping to go straight into medical school once I graduated. The pandemic gave me the opportunity to pursue the master’s in public health,” he said.

“I don’t think in the past, I would have pursued public health, and so I’m grateful for that. It was a little bit of a silver lining to all the negativity of COVID.”