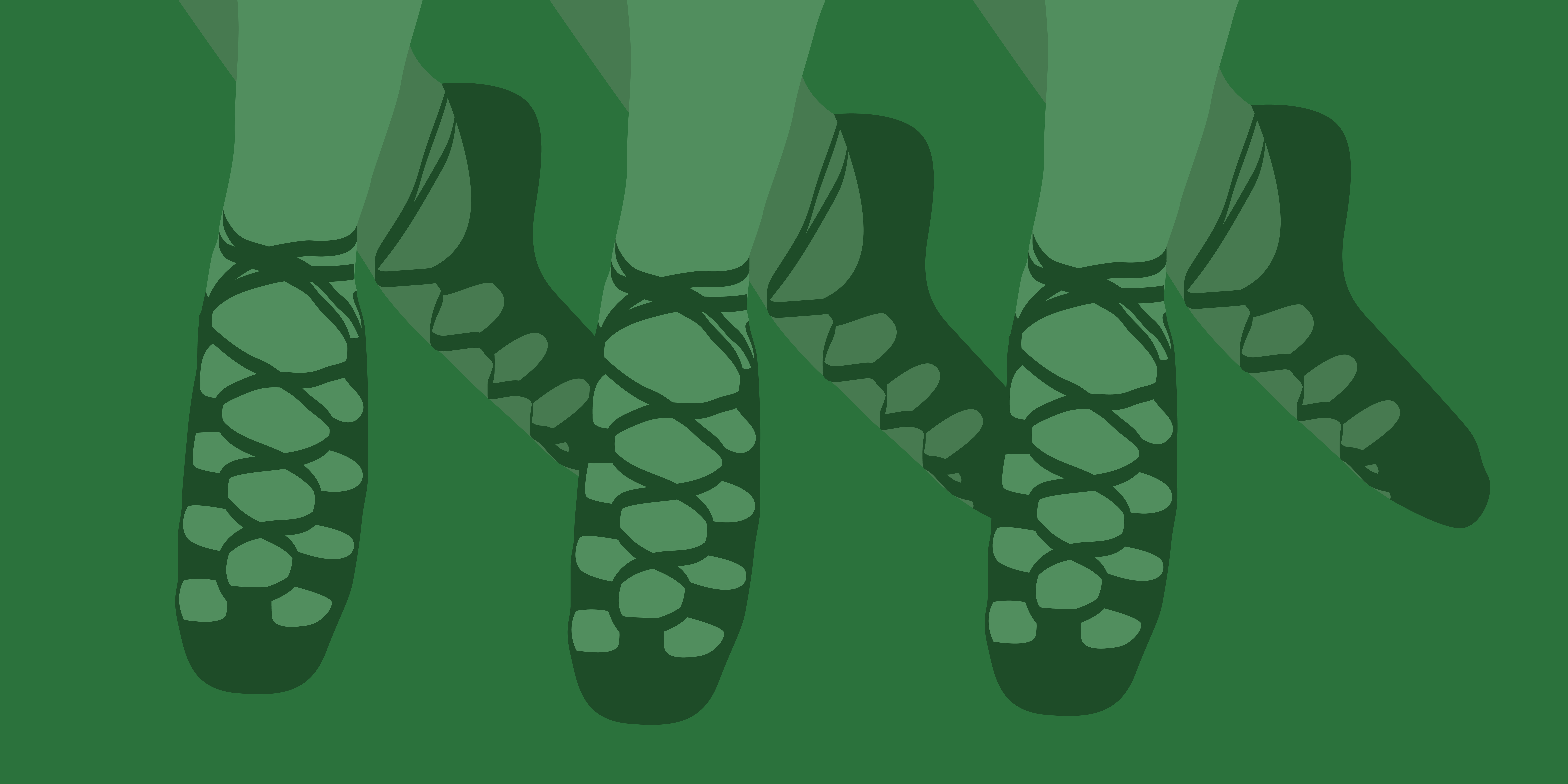 Associate Editor Maureen Dunne takes us on a tour of her favorite day of the year.

As a cello player in an Irish group, the Academy of Irish Music, I begin my St. Patrick’s Days with a couple of tunes on the morning news (oftentimes north of 6 a.m.) and include zig-zagging to pubs, radio stations, theaters and cultural centers for gigs. It’s our group’s busiest and most exciting day of the year — with no time to see the green river.

I’m not claiming to be authentically Irish, as my byline might suggest. I have no relatives across the pond, not even a great-grandparent off the boat. But, I am an urchin of the Northwest Side’s finer Irish establishments — staying until close as a bartender or patron.

The first (or second, if you’re behind the bar) thing an Irish person asks is, “Where are you from?” A successful answer in this delicate situation is a county in Ireland, ideally, the one the asker is from, but unfortunately, one I couldn’t provide. As a child dragging the name “Maureen Dunne” around a bunch of long-winded old Irish people, I got the question a lot. The only answer I could muster was “across the street.”

Thus my post-parade guide begins after Saturday’s downtown route, across the street from where I grew up, whose halls I’d help fill with music on Saturday mornings and in whose pub I learned to pour a Guinness. After you’ve seen the Plumbers’ Union dye the Chicago River green, and inebriated parade-goers dye every alley piss-yellow, take the Blue Line toward O’Hare for some culture at Mayfair’s Irish American Heritage Center.

If you can hear the scream of a tuning bagpiper escape above the low rumble of the Blue Line, you know you’re close to the Irish American Heritage Center. You may recognize the center, a former public elementary school converted to a cultural center in the 1970s by a group of Irish immigrants, as a set for “The Chi” and “Chicago Fire.” It now houses Irish dance, music and language schools, a social and immigration services provider, a library, theater, pub and many quinceañeras in its ballroom.

Festivities: The St. Patrick’s Festival kicks off at 1 p.m. with live music and dancing throughout the building. The second-floor library and art gallery are open for a deep dive into history and culture, complete with a book and arts and crafts sale. Its pub, the Fifth Province, where you should NOT order a Car Bomb to drink, is open all day. Explore the Fifth’s mile-long whiskey list or try its signature craft beer, Lake Effect Brewing’s Fifth Province Ale, on draft. With a buffet-style corned beef and cabbage lunch available and a plethora of Irish candies and snacks (think cheese and onion Taytos or delicious Crunchie bars) in its gift shop, spend a couple of hours refueling and immersed in Irish culture before heading to your next stop of the evening for some tunes: Chief O’Neill’s. 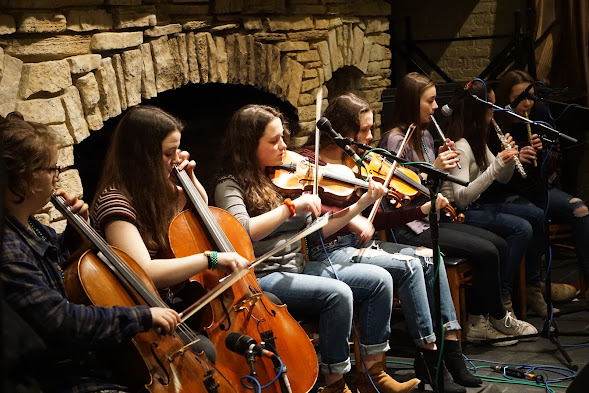 Playing in front of the Fifth Province fireplace during the St. Patrick’s Day season in 2018. Photo courtesy of Maureen Dunne, 14 East.

Catch a 15-minute Uber to Albany and Addison or hop on the Blue Line to the Addison stop and catch the 152 Bus east.

Chief O’Neill’s is named for turn-of-the-century Chicago police chief Francis O’Neill, an Irish immigrant who archived thousands of traditional tunes and kept the tradition alive. It’s the place to be for music and dancing on St. Patrick’s Day.

Jam-packed with fiddlers, bagpipers and the bouncing curls of Irish dancers, Chief’s makes its namesake proud. You’ll hear Chicago Irish music cornerstones, well-known bands and musicians that have been on the scene for years. Its tagline is “The pub you’ve been practicing for,” and in my case, it couldn’t be more accurate.

Every generation of the Academy has played at Chief’s since we were beginner Irish music students, and are lucky to have a slot there again this year from 4 to 5:30 p.m. Don’t miss Baal Tinne, the Academy’s parent band, from 5:30 to 7:30 p.m.

Festivities: Live music begins at 9 a.m. and the bar is open until 2 a.m. Don’t miss performances from Chicago’s premier Irish musicians and dancers throughout the evening:

It feels sacrilegious to even suggest leaving Chief’s by choice on Paddy’s Day, but this year there’s finally a good enough reason: The Wolfhound Bar & Kitchen, a recent addition to Avondale’s restaurant scene. If you have enough hair on your chest at this point in the evening, hoof it a half-mile south on Elston — you can’t miss it. 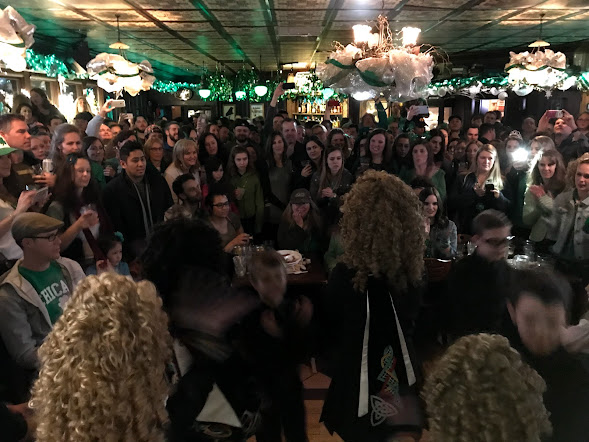 Photo taken onstage after our set at Chief’s in 2019. Getting offstage can be quite the challenge! Photo by Maureen Dunne, 14 East.

This marks the Wolfhound’s first St. Patrick’s Day nestled in the elbow of Elston, Belmont and California. This bar (full disclosure — it’s where I currently work), recently received a scathing online review for “… hav[ing] rowdy city workers there who disturb the ambiance.”

Any ambiance without rowdy city workers could use a little disturbance, in my opinion.

Its owner, a Chicago Firefighter and fiddler, used the pandemic to rehab the inside of this historic spot. Enjoy the Wolfhound’s All Day Irish Breakfast from its scratch kitchen, a Snakebite (a pint of half Magners Cider topped with Guinness) on draft or craft cocktails.

A post shared by The Wolfhound Bar and Kitchen (@wolfhoundchicago)

Festivities: Stop by before 10 p.m. for corned beef sliders, banger brats and all-you-can-eat traditional scones and brown bread from the Galway Bakers. Live music from the Shannon Rovers pipe band and Baal Tinne will be bumping all night.

No day filled with zipping all over the North Side for gigs is complete without a late-night rendezvous at the Nugget for decaf, pancakes and a healthy side of gossip. The founder of the Academy of Irish Music and Baal Tinne, and one of my best friends, Noel Rice, would convene all of us “kids” in the corner booth to debrief the day. Our chats at The Nugget are my — and many of his former students’ and friends’ — most cherished memories since his passing in 2019. 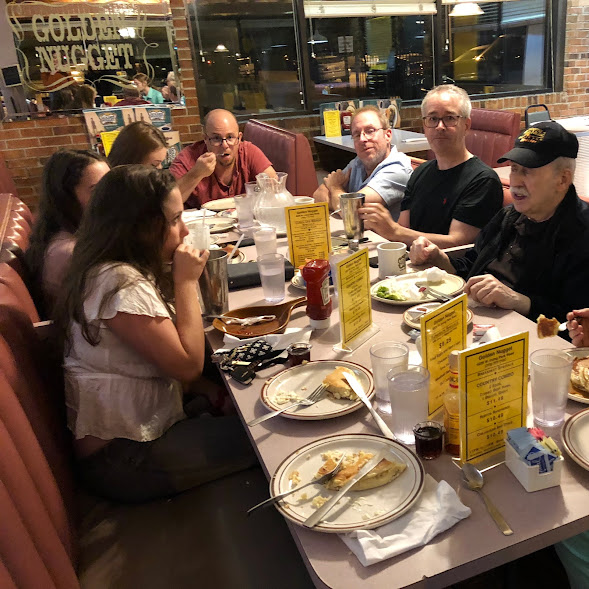 A post-gig chat among Academy and Baal Tinne members at the Golden Nugget, 2018. Photo by Maureen Dunne, 14 East.

My suggestion here is loose — the Nugget at Irving and Tripp we frequented now closes at 9 p.m. Now, stopping at any 24-hour establishment is more of a principle. A successful Paddy’s Day needs a nightcap of food, coffee and insightful conversation with your best pals before the early-morning trek home.