Queer Riot Seeks to Create You.. 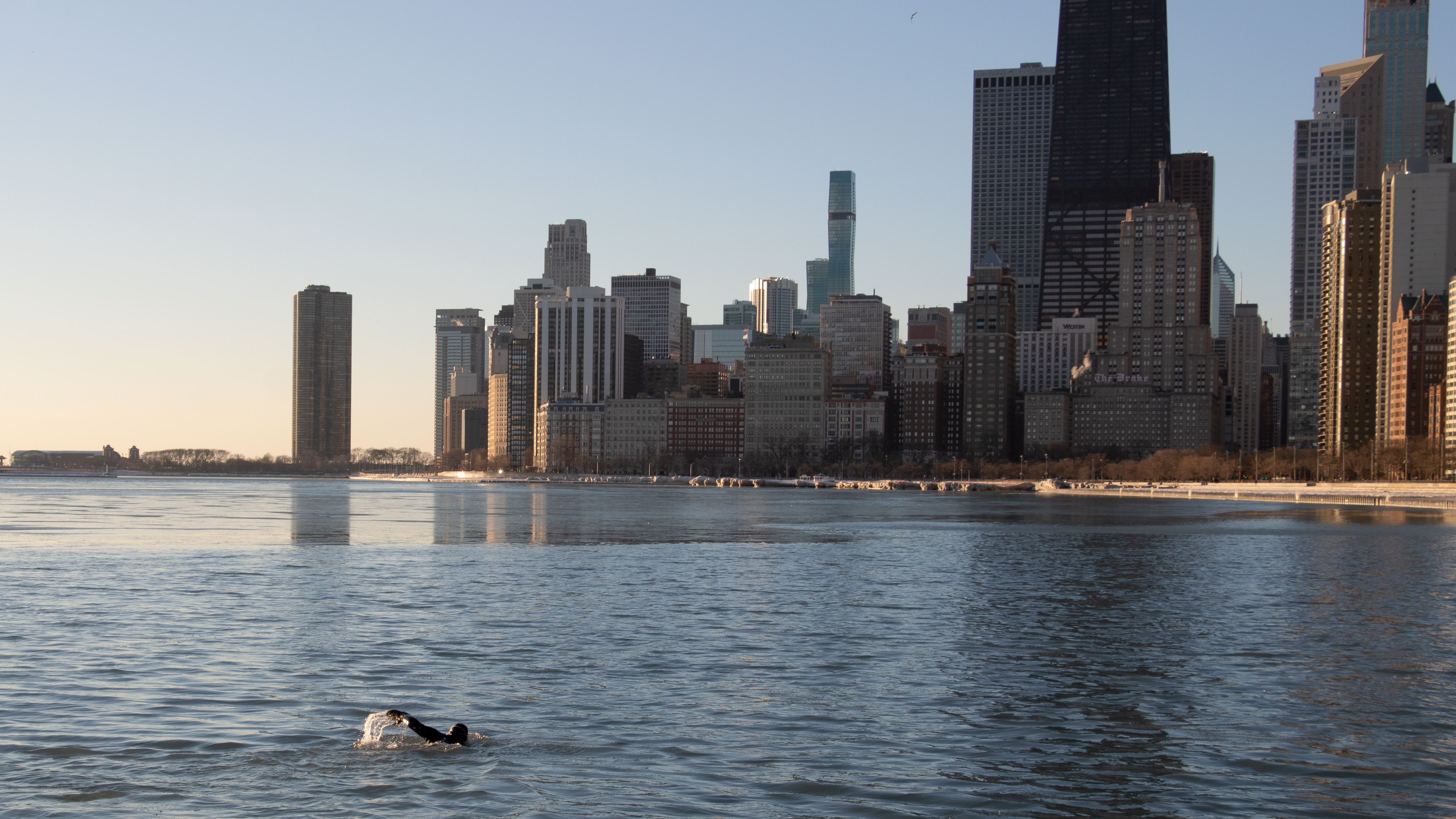 “When you can swim continuously, after a few minutes, it’s like you got all this junk going on in your head and then you’d find your groove and it’s just very peaceful. You can’t do that in a pool.”

It’s 6:30 a.m. as the sun rises over Lake Michigan. The city has a warm glow even though the temperature is below freezing. A few people begin to gather at Ladder 1 as they prepare to swim in the lake that is currently 33 degrees Fahrenheit in the middle of February. These swimmers are a part of Open Water Chicago, a group of year-round outdoor swimmers. 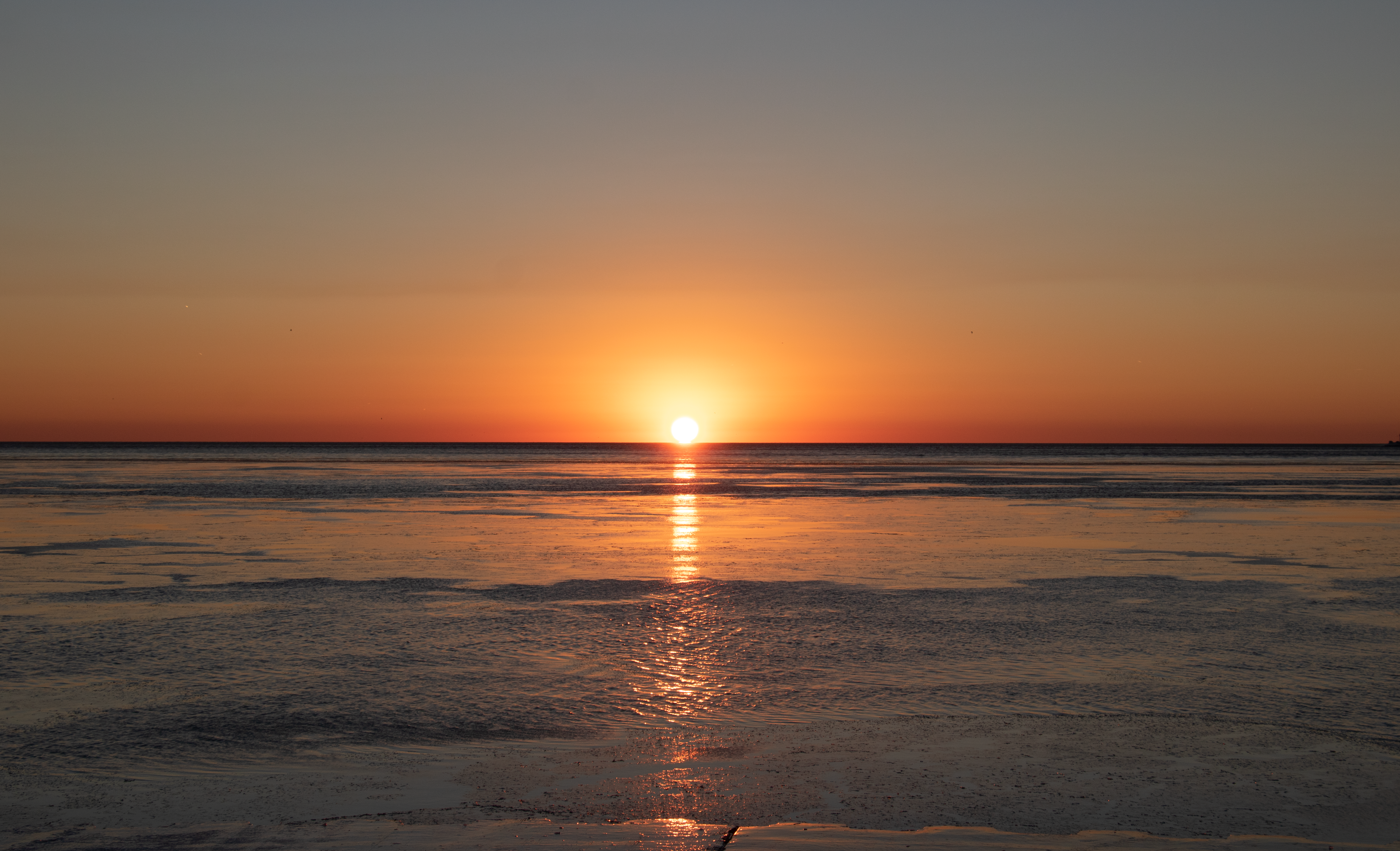 The sun rises over Lake Michigan in Chicago on February 20. Photo by Monique Mulima, 14 East.

On February 20, the group uses a pickaxe to remove the ice from the ladder so that they can get down to the lake to swim. 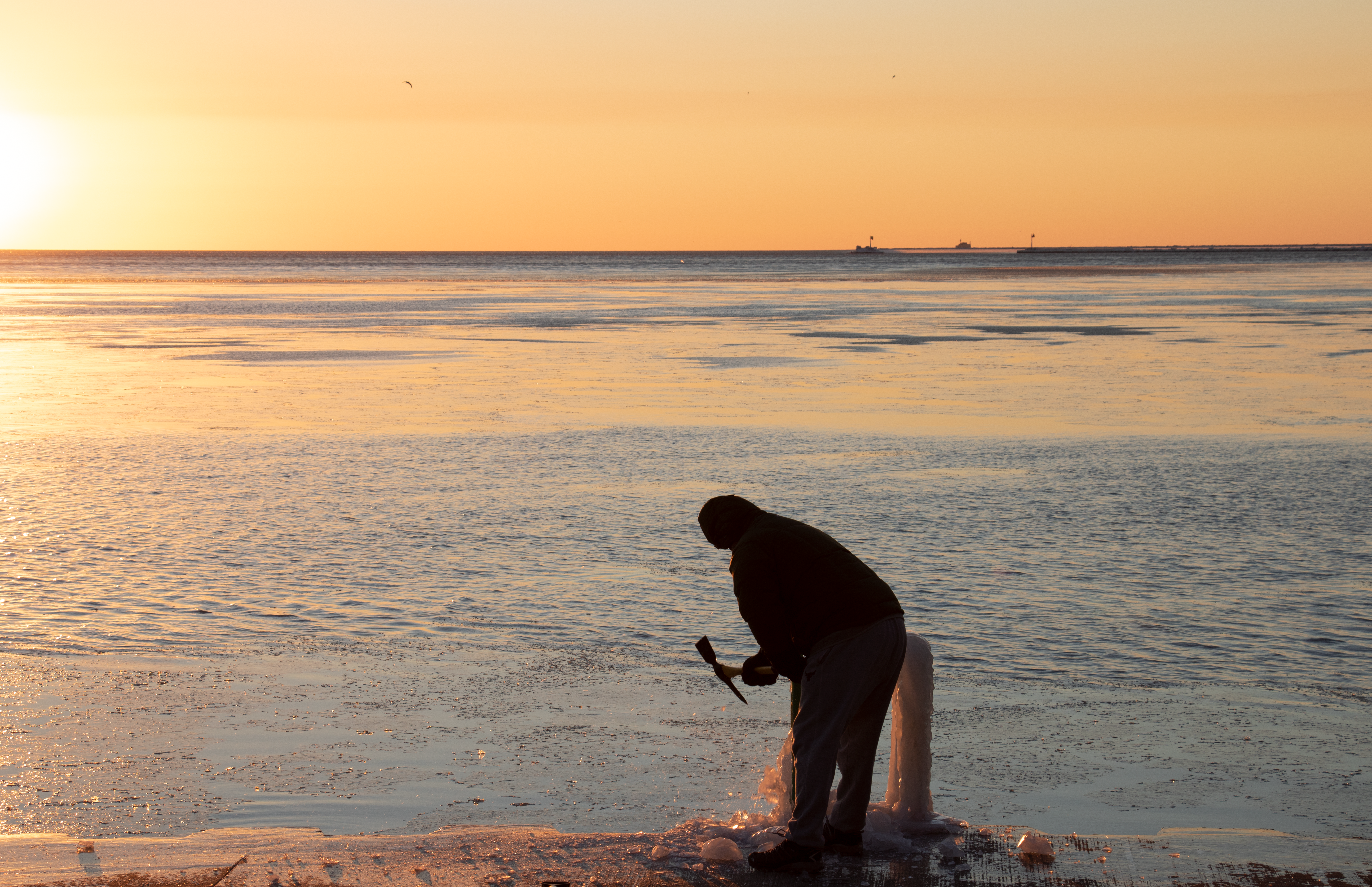 The members also prepare by putting on their swimming gear, which is made up of wet or dry suits, swimming booties, gloves, caps and goggles. As they suit up they brace for the cold water by putting Vaseline on the heels of their feet so their booties will come off easier after swimming, and by putting a bit of hot water in their gloves and booties so that their extremities won’t get too cold. 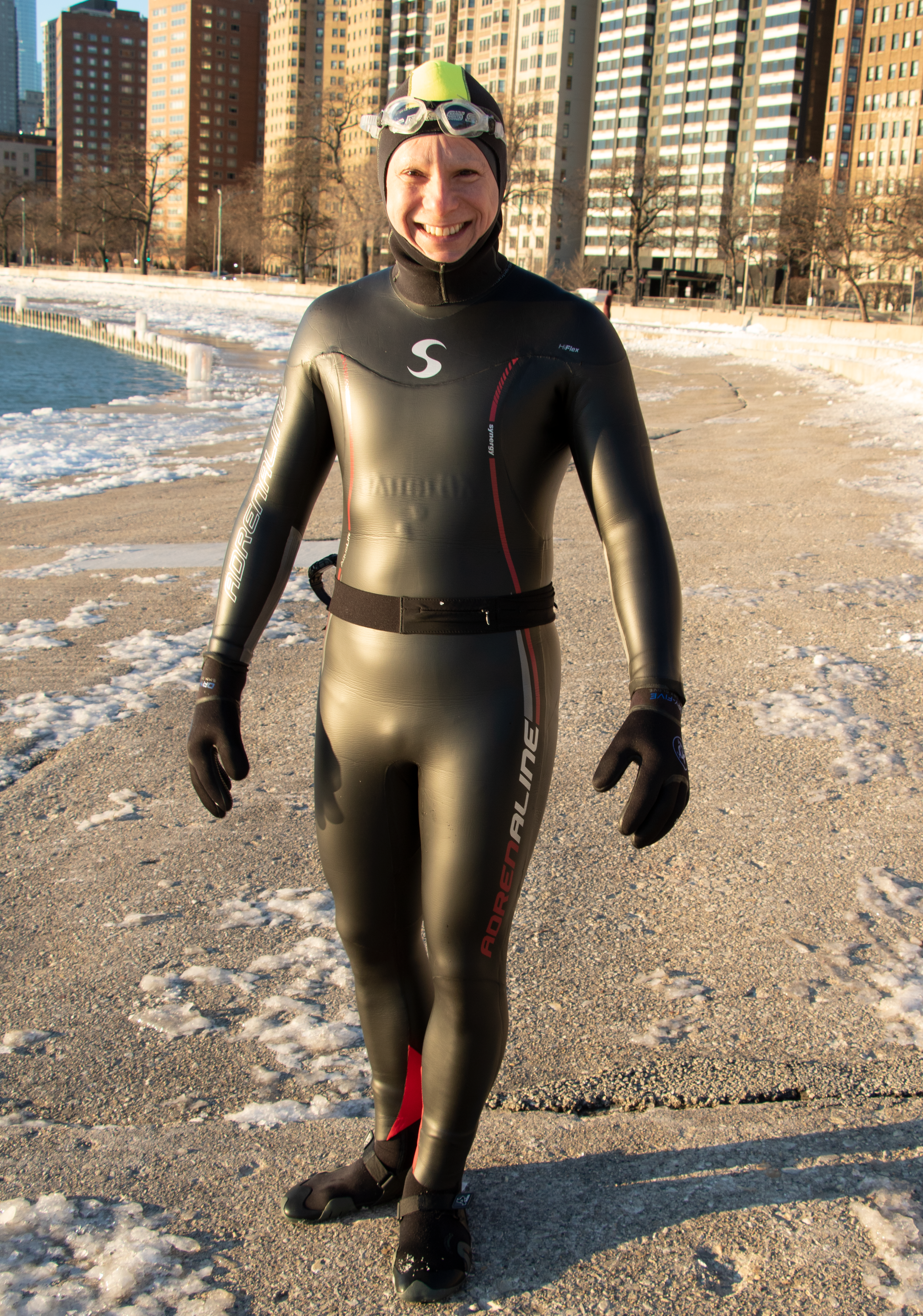 In the summer, Open Water Chicago’s weekly attendance for sunrise swims can get up to 25 people, but on this February morning there are only four. Several of the members on this day pointed out that in winter the water is often warmer than the air temperature, but the wind is what can make open water swimming difficult.

This Sunday morning was not too windy, so after the group removed the ice from the ladder and suited up, they climbed into the lake, not taking long to adjust to the cold water. It was clear that they were all quite used to this, as they calmly floated right away and casually pointed to the thin ice floating on some of the water. 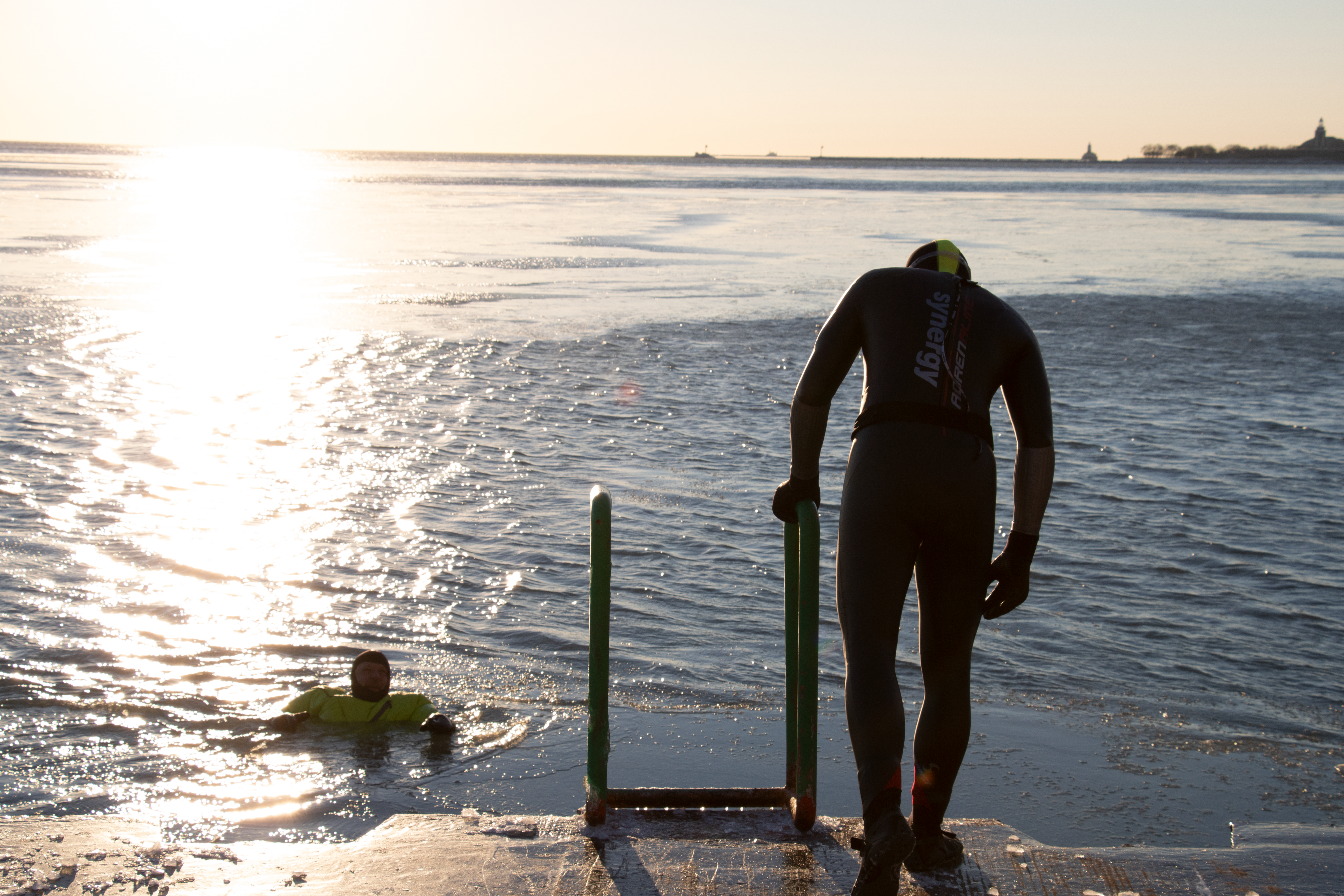 Steve P. floats in the lake as Steve Hernan prepares to climb down the ladder on February 20. Photo by Monique Mulima, 14 East.

They spent most of the time floating around and chatting or swimming short distances. Hernan explained that this relaxed atmosphere is one of the benefits of the experience and brings back fond memories of his childhood in Central Illinois.

“Growing up in the small town we’d go to the Elks [Lodge] pool, you know, no competitive swimming there. What would you do? You’d be there with all your friends, socialize, you’d horse around. It’s the same thing really kind of, but it is as an adult. So it’s just kind of like this healthy regression back to something that was really fundamental to my experience,” said Hernan.

There is no pressure for group members to stay in the water a certain amount of time but on this day, they swam for around 20 minutes. As they climbed out of the lake, their swimming gear froze due to the water interacting with the cold air. 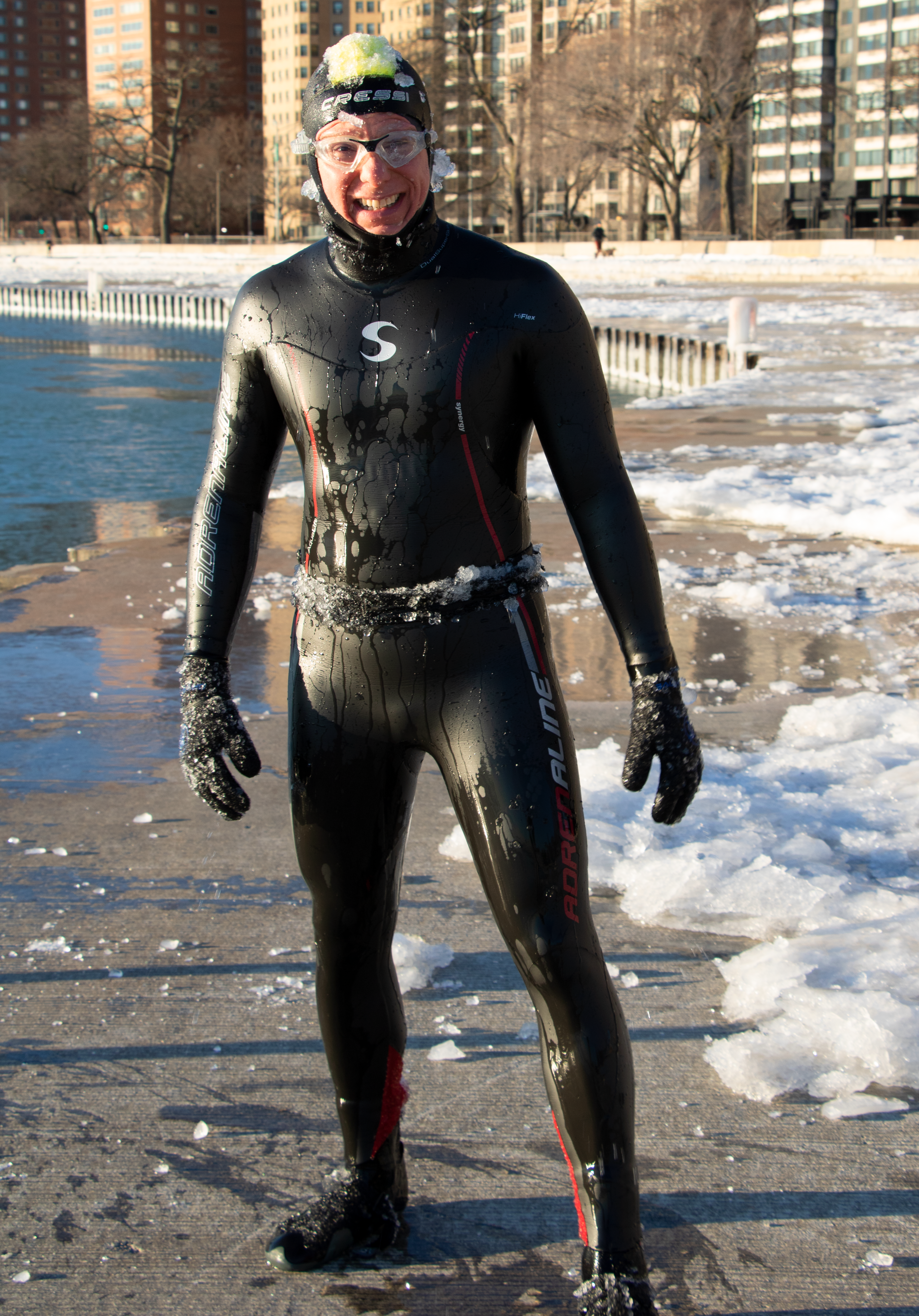 On colder and windier days, the swimmers’ suits can freeze while they’re still in the water. Ray Fearing, a group member since November 2019, said that two weeks prior the water had dipped below freezing during one of their swims.

“Water was turning to ice while we were in it,” said Fearing.

Although some days can get cold, group members continue to come back because of the benefits.

“When you can swim continuously, after a few minutes, it’s like you got all this junk going on in your head and then you’d find your groove and it’s just very peaceful. You can’t do that in a pool,” said Hernan.

After enjoying his swims in fall 2019, Fearing wanted to keep swimming year-round.

“I was just trying to get some open water swimming experience, but as it got colder, I just kept coming,” said Fearing.

Hernan explained that while many people do not understand why they continue to swim in winter, throughout most of human history people swam outside and most outdoor water would not have been hot or even warm. He believes continuing this practice can connect people to their environment.

“Just being in a situation, which is not like a controlled pool environment, gets you more in touch with just nature and the natural rhythm of things,” said Hernan.

Year-round outdoor swimming may not be popular in the northern U.S., but in recent years more people have begun to look at the benefits of cold water through cold-water immersion and cryogenic therapy, in which people are exposed to near-freezing water in tanks for short periods of time. There are currently 15 cryogenic therapy clinics in Chicago. They claim to have benefits like reducing inflammation and aiding in recovery.

“I think it’s funny that they pay for it, too,” said Hernan.

Open-water swimmers see outdoor swimming as a way to get the potential health benefits of cold water for free.

Mike Tipton is a professor of Human and Applied Physiology at the University of Portsmouth. He has done extensive research on the potential risks and benefits of cold water immersion.

Tipton explained that when you enter cold water the skin is quickly cooled and the cold receptors in the tissues below the surface of the skin evoke the “fight-or-flight” response. Since your body is shocked by this rapid change in temperature, it reacts defensively.

“That increases heart rate, increases breathing, releases all the stress hormones and basically prepares you to either run away or engage in a fight,” said Tipton.

“They tend to say, ‘Well, I go in there and it sets me up for the day, awakens me, arouses me, makes me alert, feel full of energy.’ I think we can explain that by the release of the stress hormones,” said Tipton.

There are also people that claim there are psychological benefits of cold water immersion. Tipton with Christoffer van Tulleken, Heather Massey and Mark Harper authored a case that was published in The British Medical Journal in 2018 about a 24-year-old woman who was successfully treated for depression through open water swimming. However, Tipton points out that it is hard to know whether cold water is the cause.

“When you go open water swimming, yes, you’re going into cold water, but you’re also exercising. You’re also meeting with other people, so there’s a community thing. You’re going in often to a beautiful place, sea water, so you’ve got green and blue therapy. It’s an actual distraction, takes your mind off other things,” said Tipton. 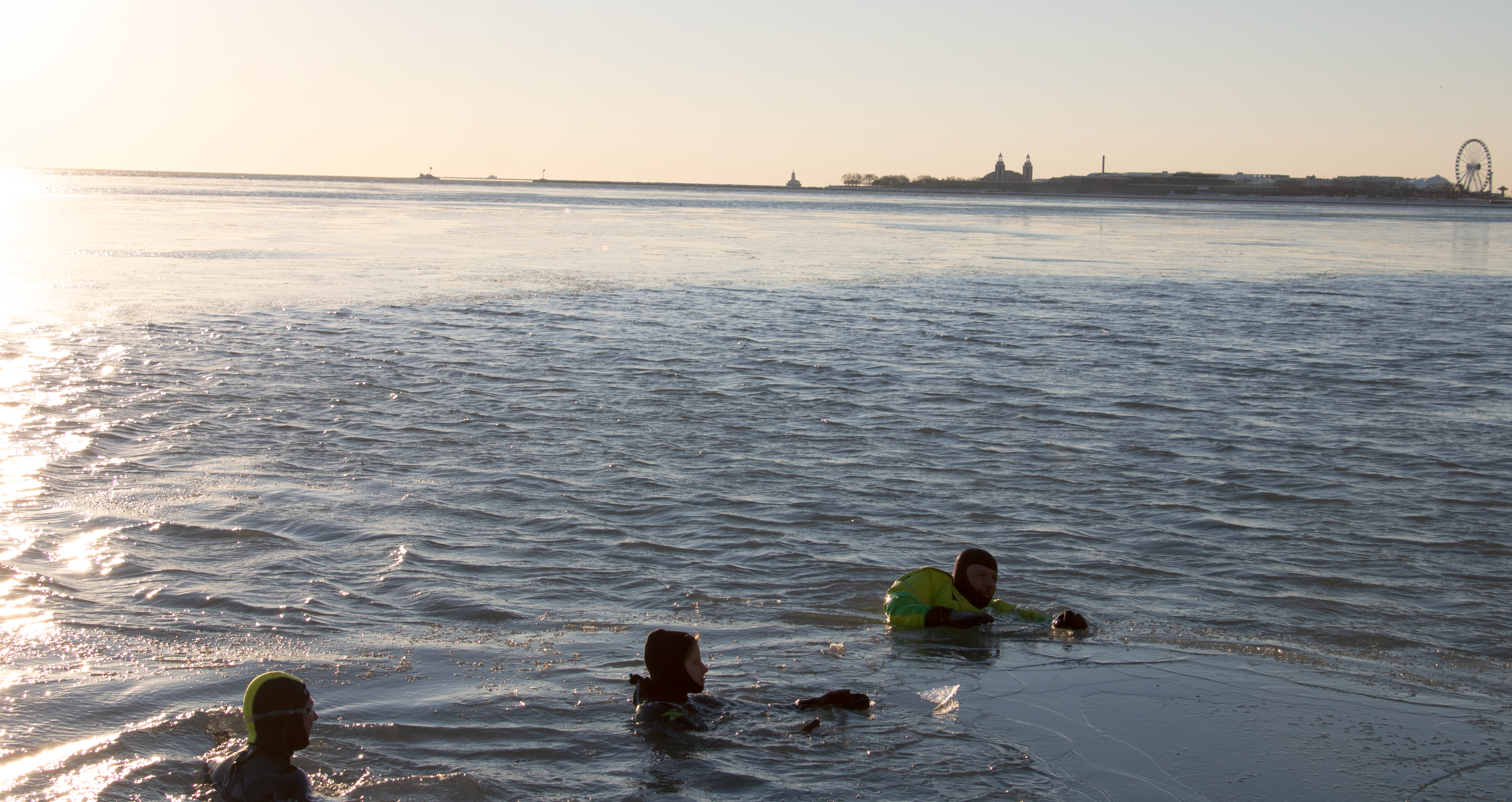 While there are many potential benefits of cold water swimming, Tipton points out that there are also risks.

“If you happen to go into cold water and that [cold shock] response means you lose control of your breathing, you significantly increase the chance of aspirating the one and a half liters of water you need to cross the lethal dose for drowning,” said Tipton.

Tipton explained that after the cold shock response, the tissue of the muscles and superficial nerves begin to cool within around 10 to 20 minutes, which can lead to losing control of limbs and physical incapacitation.

Tipton offered some tips on how to stay safe in cold water, including speaking to your doctor beforehand.

“Trying to [swim] with a club, doing it with other people, doing it in a safe location, staying in your depths, not staying in, don’t overstay,” said Tipton.

Open Water Chicago tries to account for these by having all group members sign a swim waiver that outlines all the possible risks. Hernan explained that this is necessary to ensure safety and so that participants can make informed decisions.

“It’s like every situation in life, there’s risks, there’s uncertainty. As long as you know what they are and you’re comfortable with it and you’ve thought about this rationally, then yeah, that’s your choice,” said Hernan.

Another precaution Open Water Chicago takes in the winter is that they do not post their swim meetup information to their Facebook page. Instead, people interested in winter swims must email them directly so that they can ensure that they are experienced and equipped.

“You want to weed out the bucket listers and the rogue elements, the people that are like, ‘Oh, yeah, you know, I want to jump in just to say that I did this’… And it’s like, well, do you have any idea that you could die doing that?” said Hernan.

Hernan trained as a lifeguard and so far, he hasn’t had to save any group members. He wants to ensure that the group stays a safe and fun place.

Open Water Chicago was founded in October 2007 when Hernan was training for the Golden Gate Bridge swim. Hernan was doing the outdoor San Francisco swim later that month but struggled to find people to swim within Chicago since the beaches had already closed, so he turned to the internet.

“There was on Craigslist, I remember, there was this activity partners section where people would look for sports partners. And I just put a note there. ‘Hey, looking for people to swim.’ We met at Ohio Street Beach, and a few people showed up and it was great, and we’d keep in touch with emails back and forth,” said Hernan.

As the group continued to grow, they struggled to keep up with email chains, so Hernan created a WordPress site and later a Facebook and YouTube page. He also began to offer one-on-one open water swimming lessons for people to learn and join the group. 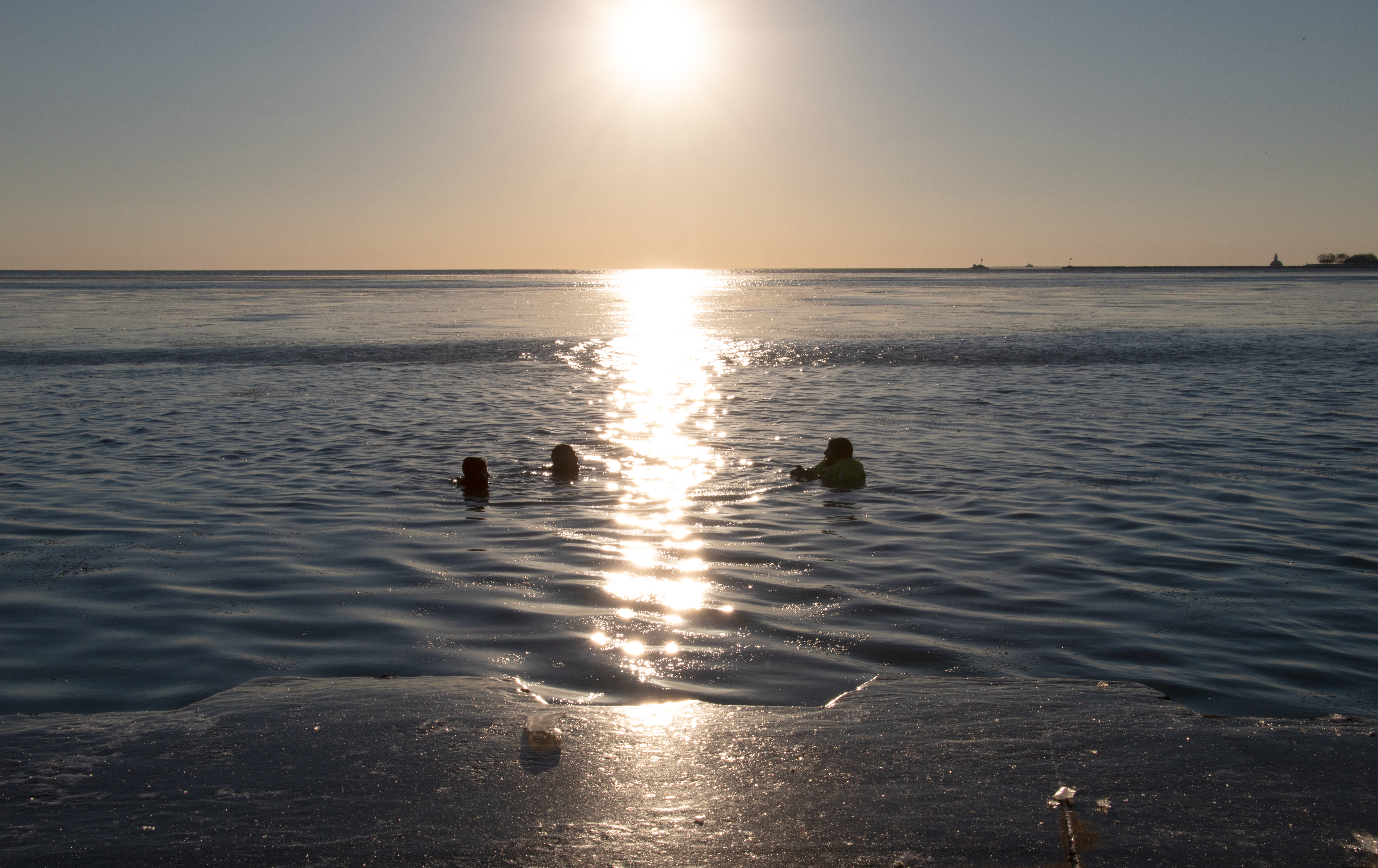 Hernan did not initially anticipate it becoming a large group. He said he was just looking for some other people to swim with in Chicago. Hernan says that to date, 520 people have swum with Open Water Chicago.

“There’s always a core group of people that come out, they’re the regulars and semi-regulars, there’s always new people. When you get to the winter swim, that winnows even more. Usually it’s just a handful, and it’s the same thing, that group changes over the years, too,” said Hernan.

Over the years, members have found a community of outdoor swimmers in Chicago, which Hernan describes as sometimes even feeling like a big pool party.