Why People Swim in Freezing La..

An Escape from The Heteronorma.. 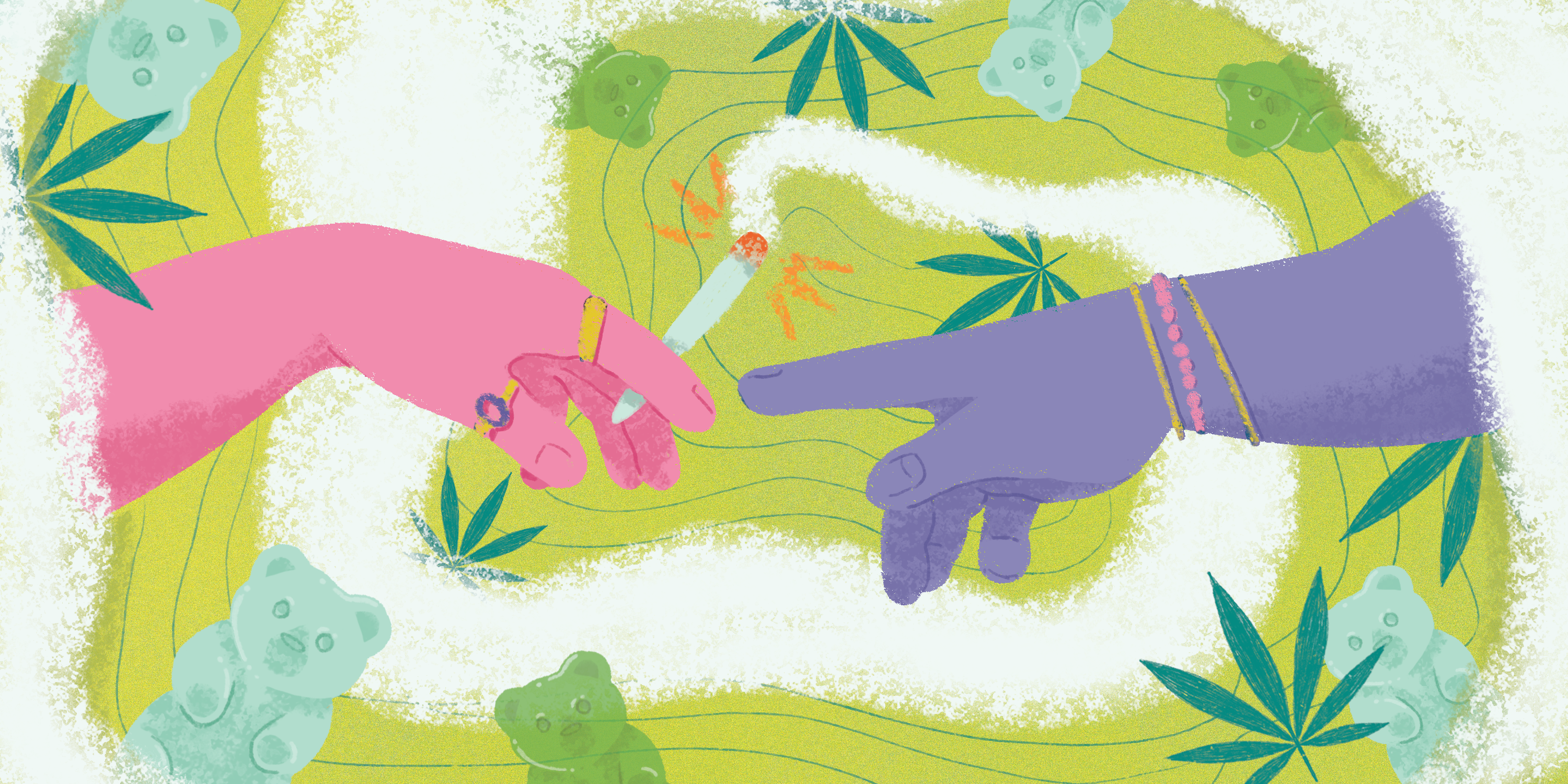 As the cannabis industry in Illinois grows, it continues to exclude minority communities. Here’s how some Chicagoans are working to change that.

In the past twenty years, marijuana usage has become increasingly prevalent in media and culture. Films such as Pineapple Express, Harold and Kumar and Half-Baked placed cannabis consumption in the public eye, while musicians such as Snoop Dogg and Wiz Khalifa have made cannabis a part of their brands. We’ve come a long way from the days of Reefer Madness, and cannabis is even being legalized on the state level, though it remains illegal federally.

In Illinois, recreational cannabis became legal on January 1, 2020. As of January of 2022, there are 110 stores in Illinois that are selling cannabis to the state’s 21+ population. Illinois is also expected to net $1 billion in cannabis revenue in 2021. And although the state is clearly reaping benefits from the ever-expanding cannabis industry, there is not one Black-, Latinx- or non-male-owned dispensary in the state of Illinois.

Within Chicago, 10 stores opened as a part of the flagship legalization passed by Illinois lawmakers. There are now 15 dispensaries in operation, but the history of segregation in Chicago’s neighborhoods adds disparity in physical access to legal cannabis. The city’s dispensaries tend to be located either in the Loop or on the North Side, in predominantly white and affluent neighborhoods. There is only one dispensary on the South Side, and there are four on the West Side, in the predominantly white West Loop and Bucktown neighborhoods.

These geographic areas hold most of Chicago’s Black and Latinx population – groups who are being blockaded from accessing what other Chicagoans can. With this clearly profitable industry, why are upper-class white people the only ones with access to reap the benefits?

I discussed this issue with Douglas Kelly,  executive director of the Cannabis Equity Illinois Coalition, and Peter Contos, deputy director of the coalition. The coalition is focused on cannabis equity and education. Both Kelly and Contos were early members of this organization, with Kelly’s sister, Minnie, being one of the initial organizers.

A former resident of Englewood, Kelly is deeply aware of the historical background that has caused a lack of access to legal cannabis in Black and Latinx neighborhoods. “[I] fully understand the impact of the War on Drugs and systemic disinvestment on our communities,” he said.

While the term “War on Drugs” has existed for half a century, the true assault on different substances began as early as the 19th century in the United States. Any substance deemed as a drug by white-dominated power structures such as the media was often associated with communities of color, beginning with opium and Chinese immigrants in the 18th century.

Cannabis first gained a negative connotation when associated with a white fear of Mexican immigrants migrating into the United States in the early 20th century. In fact, in Mexican Spanish, it was referred to as “marihuana,” with the anglicization of the word serving as a way for anti-cannabis activists of the time to associate the plant with Mexican immigrants. In the early 20th century when jazz became popular, cannabis was demonized as a “jazz drug,” with use of the plant being linked to Blackness.

Beginning with the Nixon administration in 1971, the U.S. government began targeting communities of color with harsher policing and stricter sentencing for drug offenses. The creation of the Drug Enforcement Agency in 1973 aided this assault, with raids adding to already violent and racist policing.

With this clearly profitable industry, why are upper-class white people the only ones with access to reap the benefits?

According to their website, “The Cannabis Equity Illinois Coalition was founded as support for adult-use cannabis in Illinois grew.” After a series of public meetings on the South Side of Chicago discussing the issue of legalization in the communities in the state, community residents recognized that the cannabis industry had the potential to exclude people of color, given the data that surrounds drug convictions.

In a 2018 report, the Drug Policy Alliance found that Black people comprise 13% of the U.S. population, but account for 29% of the total amount of people arrested for drug-law violations and 40% of drug-violation incarcerations. Latinx folks similarly bear the brunt of drug convictions: They make up 18% of the American population and account for 38% of drug-related incarcerations.

While the state of Illinois has created a pathway to expungement, Contos said, “there are not nearly enough opportunities for people with records, cannabis or not, violent or not.”

Kelly backed this up, adding, “Illinois does allow people with records to work in cannabis, but oftentimes companies avoid hiring them, or don’t know how to support them in their employment.”

Contos also affirmed that history has a bearing on how cannabis is perceived to this day. “There is still a lot of fear and stigma around cannabis… because of the War on Drugs and its collateral consequences,” he said. “Cannabis has the power to heal communities, as it has for thousands of years, but this country weaponizes it against people of color and poor people.”

The group remains optimistic in their pursuit of cannabis equity, with Kelly emphasizing a need for unity among communities being left out of the industry. Contos also emphasized cannabis’ potential as a medicine. “I suffered a series of head injuries that led me to be dependent on opioids,” Contos conveyed. “Once I discovered cannabis, it completely changed my life and I’ve been advocating and organizing to end the drug war since.”

When coupled with the segregation of Chicago’s dispensaries, these stereotypes mean minority workers are less likely to be hired. This leads to a huge gap in who is able to claim ownership within the cannabis industry, something that Kelly and Contos have been working towards – a more equitable future when it comes to legal cannabis access in Chicago.

“White mothers can be dubbed ‘the canna moms’ for using cannabis, but Black and Brown people are labeled ‘lazy or worthless’ because of their use of cannabis,” Contos said.

As work continues to make cannabis a more equitable industry, some of Chicago’s young adults are creating what can be described as grassroots dispensaries.

Operating informally, these queer Latinas are passionately creating a unique pathway to equal participation in the cannabis industry. I spoke with one of the owners of an Instagram storefront dedicated to selling cannabis edibles, Juana Gama (a pseudonym, to protect her identity, which is Spanish for “Jane Doe”), about how she plans to blaze her own trail into a white, male-dominated industry.

Gama considered the misogyny they’ve encountered as cannabis purchasers, pointing out that many men they’ve purchased cannabis from have a large clientele, but don’t possess knowledge of products or great customer-service skills. “Women at times are not recognized as much, yet they are kinder, run better deals, and have a certain personality that makes you want to keep buying from them,” she said.

“We cannot be cannabis users who ignore the realities of the cannabis world that have hurt so many, that others have profited off and are already beginning to be elitist,” she said.

“My partner and I were tired of plugs who would just sell edibles without knowledge of strains or amounts of milligrams,” she added. “We wanted potency, and well-informed edibles so that people could enjoy their experience and know the high that they should be expecting.”

Gama described the core values of her business as attention to detail, sustainability and community, and digital safety, giving me a detailed explanation of their process in our interview.

“We value our customers,” she said. This is evident, as the storefront gives discounts for multiple reasons; when people review their products and share with their friends about the business, or bring back reusable containers to be reused for another order as a form of sustainability. As an additional commitment to sustainability, the business utilizes compostable baggies for packaging its goods.

Given the stigma surrounding cannabis use, they have also prioritized the digital privacy of their customers, using the encrypted messaging app Telegram to conduct transactions. With values like these, the women are adding a unique touch to their work that allows them to connect them to their clientele on a personal level.

In addition, they are actively seeking out a pathway to healing communities impacted by unfair drug policy. “We cannot be cannabis users who ignore the realities of the cannabis world that have hurt so many, that others have profited off and are already beginning to be elitist,” she said.

When we spoke about other intentions to diversify and uplift the cannabis community, she painted a picture of the future of edibles. She hopes to open a storefront coffee and edible shop, utilizing its revenue to fund mutual aid and support marginalized communities that have been incarcerated and impacted by the illegality of cannabis.

She, like Contos and Kelly, stressed the necessity of unity in the cannabis equity movement. Gama aspires to bring together other small shops and support one another as a collective, as her work has been reliant upon a community of friends and customers.

She also emphasized the importance of cannabis education. “We also see ourselves providing resources, tips and guides so that people can be informed and conscious cannabis users and lovers.” If more people like her are allowed insider access to the cannabis industry, there’s probable cause that we could eventually see a shift towards a more equitable and empathetic weed world.

Although the cannabis industry is in a fledgling state, we cannot ignore how Black and Latinx people have been strategically blocked from major ownership roles in the industry. This is indicative of the inequity of the burgeoning industry, as white people are now profiting from something that millions of non-white people are incarcerated for across the country.

No matter how discriminatory this space is, organizers and small business owners have found a way to forge ahead, creating a pathway for equal participation among different facets of the cannabis world. As we look towards the future, dispensaries and companies must ask themselves how they can contribute to the fight against racism within the cannabis industry, rather than leaving the work of inclusion to communities of color.