Pandemic or Not, Demand for In..

Queer Riot Seeks to Create You.. 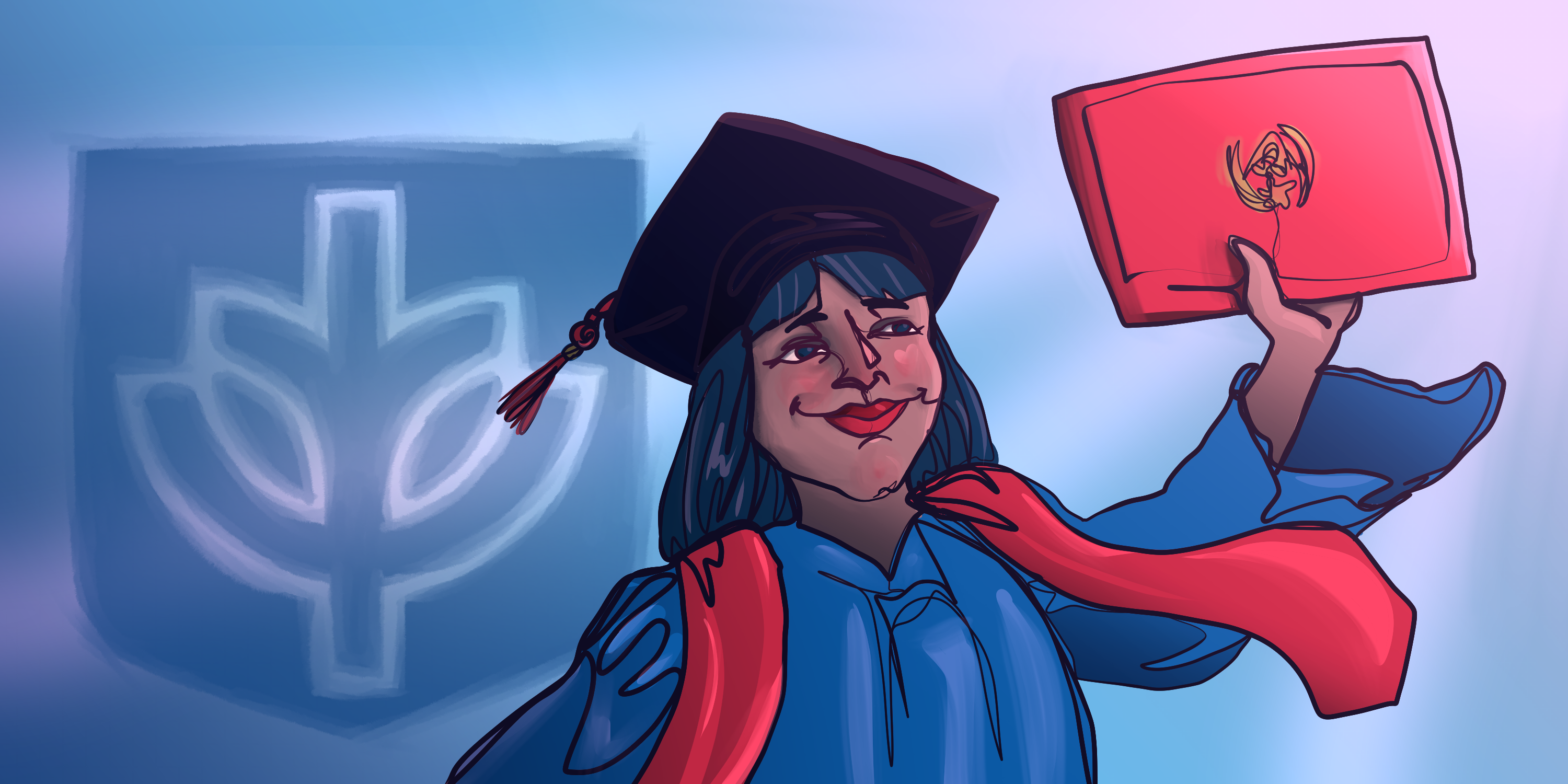 “I feel robbed,” said Marcos. “It was our entirety of sophomore year that was online. I feel like that year could’ve situated me in different places.”

Graduating early from college is something that should be celebrated, but for students graduating in Winter Quarter at DePaul University, something feels off. Students are excited to face the future, but are struggling to move forward with the heaviness of the pandemic defining their past.

Academic advisor Kitty Muto has noticed a change in the early graduates she advises.

“There’s kind of this sentiment, it’s unfortunate, but this sense of a loss,” said Muto. “A sense of being kind of burned out, it doesn’t feel as celebratory.”

Senior Nicole Schiavo is a DePaul 2022 winter graduate. She feels “good and a little nervous” about graduating early.

“I didn’t have the best time during the dead of the pandemic,” said Schiavo. “I really started to burn out [towards] the end of [the] last school year and coming back to campus kind of made it worse. As much as I wanted to be here, it kept piling on. I’m excited to be getting out early and not tack on an extra quarter while it’s already been really challenging.” 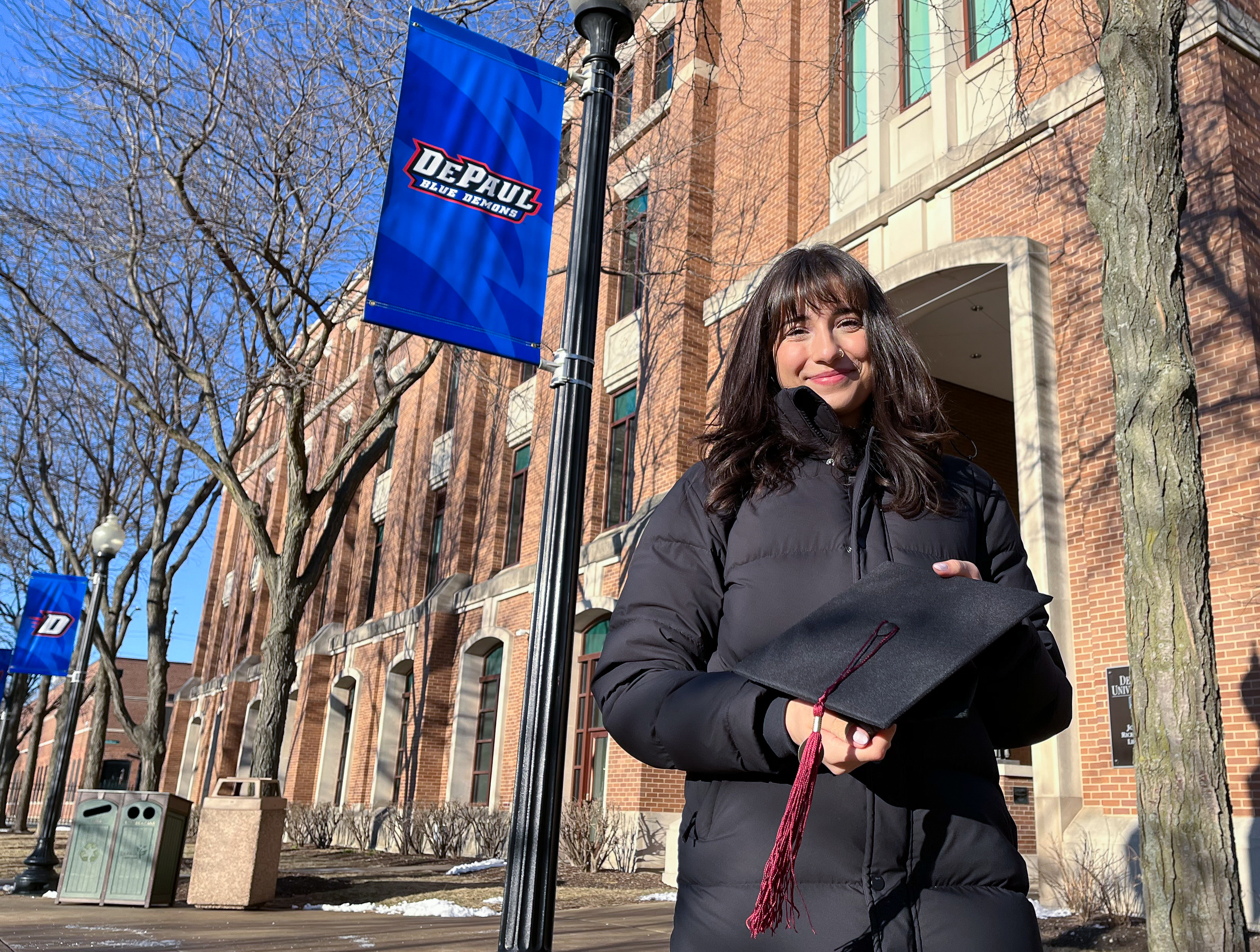 Nicole Schiavo stands on the DePaul quad holding her graduation cap. She is excited to finish her degree early. Photo by Lily Lowndes, 14 East

Current upperclassmen at DePaul have felt the brunt of the pandemic. At the beginning of the COVID-19 pandemic in March 2020, DePaul shut down its campuses. Most classes were conducted remotely for over a year, as DePaul resumed the majority of in-person instruction this fall.

Muto has seen how the pandemic has affected students. In the past, Muto sat down with students who opted not to graduate early because they were not ready to leave DePaul. While those conversations still occur, Muto says they have been uncommon over the past two years.

“I would say the students who have the opportunity to do it in winter are ready to go, for a variety of reasons,” said Muto.

She cited the pandemic, stress, burnout, COVID-19 concerns, uncertainty about the job market and wanting to get a head start on jobs as some of the main reasons for students to push for early graduation.

For younger students, the pandemic has actually been a reason to stay at DePaul.

Lancy Marcos came to DePaul University a bright-eyed freshman with high aspirations. She had several AP transfer credits and was on track to graduate early.

Marcos wanted to push things even further and enrolled in DePaul’s BA/JD 3 + 3 program, which would put her on an accelerated path to complete both her undergraduate and law degrees in only six years.

Three years, four quarters of remote learning and a global pandemic later, her plans have taken a 180. She left the 3 + 3 program, and no longer wants to graduate early.

“I feel robbed,” said Marcos. “It was our entirety of sophomore year that was online. I feel like that year could’ve situated me in different places.” 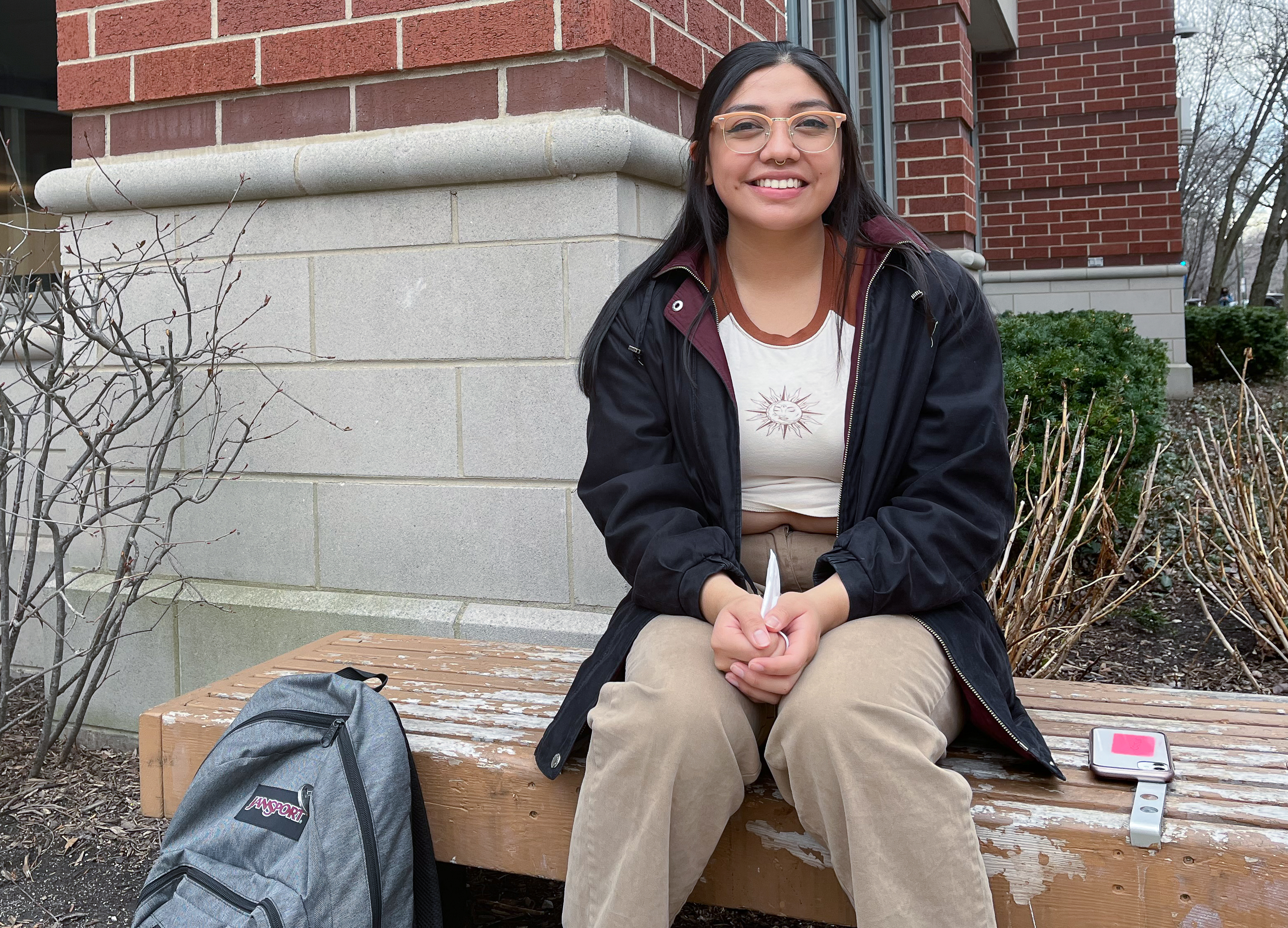 Lancy Marcos sits in the DePaul Quad at the end of the Winter Quarter. She decided to extend her time at DePaul after missing out on her sophomore year due to COVID-19. Photo by Lily Lowndes, 14 East

Marcos could graduate in Fall Quarter 2022, but she has decided to stay until at least Winter Quarter 2023.

“I want to be on campus for as long as I can now,” said Marcos. “I don’t really see the point in rushing things.”

Students like Marcos and Schiavo met with their academic advisors to arrange their schedules. Graduating early is possible, especially if students work with their advisors to plan ahead.

According to Ginny Nightingale, the assistant dean of academic advising and scheduling for the College of Communication, there are many paths to early graduation.

“I won’t see it be normal again at DePaul, which is really disappointing, but I’m still excited.”

Students who take four four-credit classes each term are on track to graduate in four years. In order to graduate one quarter early, students need to take four extra classes before graduating. This could be through AP and IB transfer, community college classes, 2-credit classes, summer classes, intersession classes or even pulling extra weight and enrolling in above normal credit hours.

Senior Kate White chose to take five classes this quarter in order to graduate early. The public relations and advertising major has maintained a positive outlook despite the unexpected changes.

“I won’t see it be normal again at DePaul, which is really disappointing, but I’m still excited,” White said. “I’m graduating early, saving some money and getting into the workplace before all the spring graduates.”

According to Nightingale, being on the quarter system can be an advantage for early graduates and a potential challenge for those graduating in spring.

“Something to consider is that DePaul, since we’re on the quarter system, the end of Spring Quarter isn’t until the middle of June,” Nightingale said. “A student who’s graduating from DePaul a quarter early at the end of March actually has a jump on the jobs that may be available.”

Graduating early comes with benefits, including more time to apply for jobs, lower tuition expenses and a sense of accomplishment for hard work paying off.

For early graduates and those soon-to-be early graduates, however, the emotional toll of the pandemic has dulled those benefits’ shine. Some seniors are ready to exit academia, while some juniors are clinging to the time they have left.

COVID-19 has dampened spirits, but students are still optimistic about the future. Schiavo has just accepted a full-time job offer, White is planning on traveling Europe in the spring and Marcos is continuing to push through her studies.

“We’ll get through it,” Marcos said, assuring early graduates that everything will be all right.