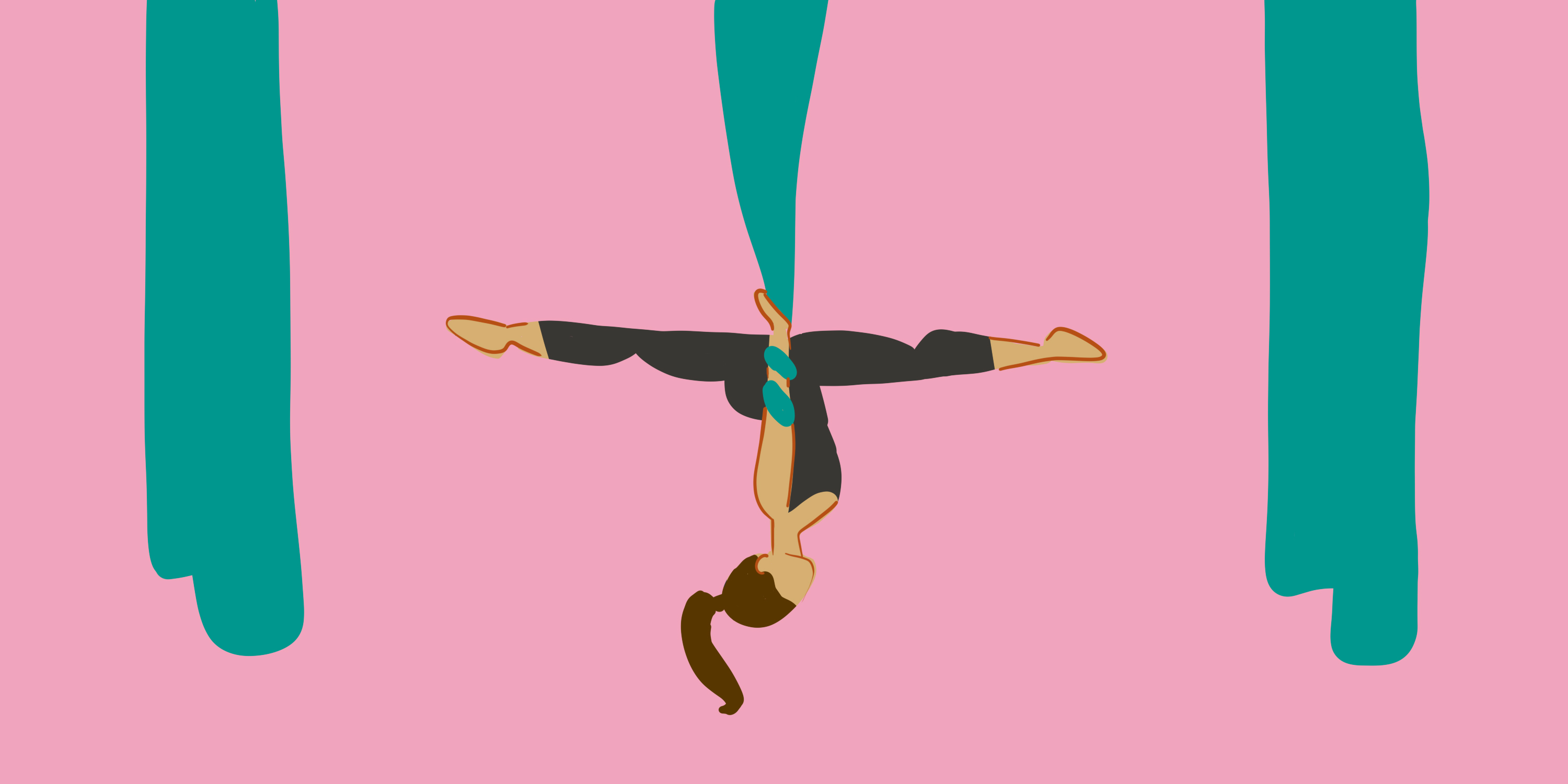 Chicago has a need for Latine health and wellness businesses, and one McKinley Park native decided to meet it.

I first met Ruby Negrete in the fall of 2020. She was casually hanging out in my living room having a mental breakdown because she was in the process of buying an aerial yoga studio at 23 years old in the middle of a global pandemic.

For a while, she was just my roommate’s friend that had incredibly long, thick hair and was always in a fitness get-up. It was clear that her identity and lifestyle revolved around fitness.

Recently, I’ve introduced fitness back into my lifestyle and Ruby has been there along the way. We had a conversation that went something like this:

Where did you grow up?

“I grew up on the Southwest Side of Chicago. My family kind of originated in the Pilsen, McKinley Park area.”

When did your relationship with fitness begin?

“I was about 14 and I lived really far from my high school. My mom took me to a local run club in Pilsen. I was really inspired by everybody in the running club. They were all older than me, right, but they had these amazing fitness goals that I had never heard of. I knew what the Chicago Marathon was, but I didn’t know what it was until I met this group. So I was introduced to the world of running, fitness, triathlons, and that’s where it all bloomed.”

So your mom was instrumental in introducing you to the fitness world? 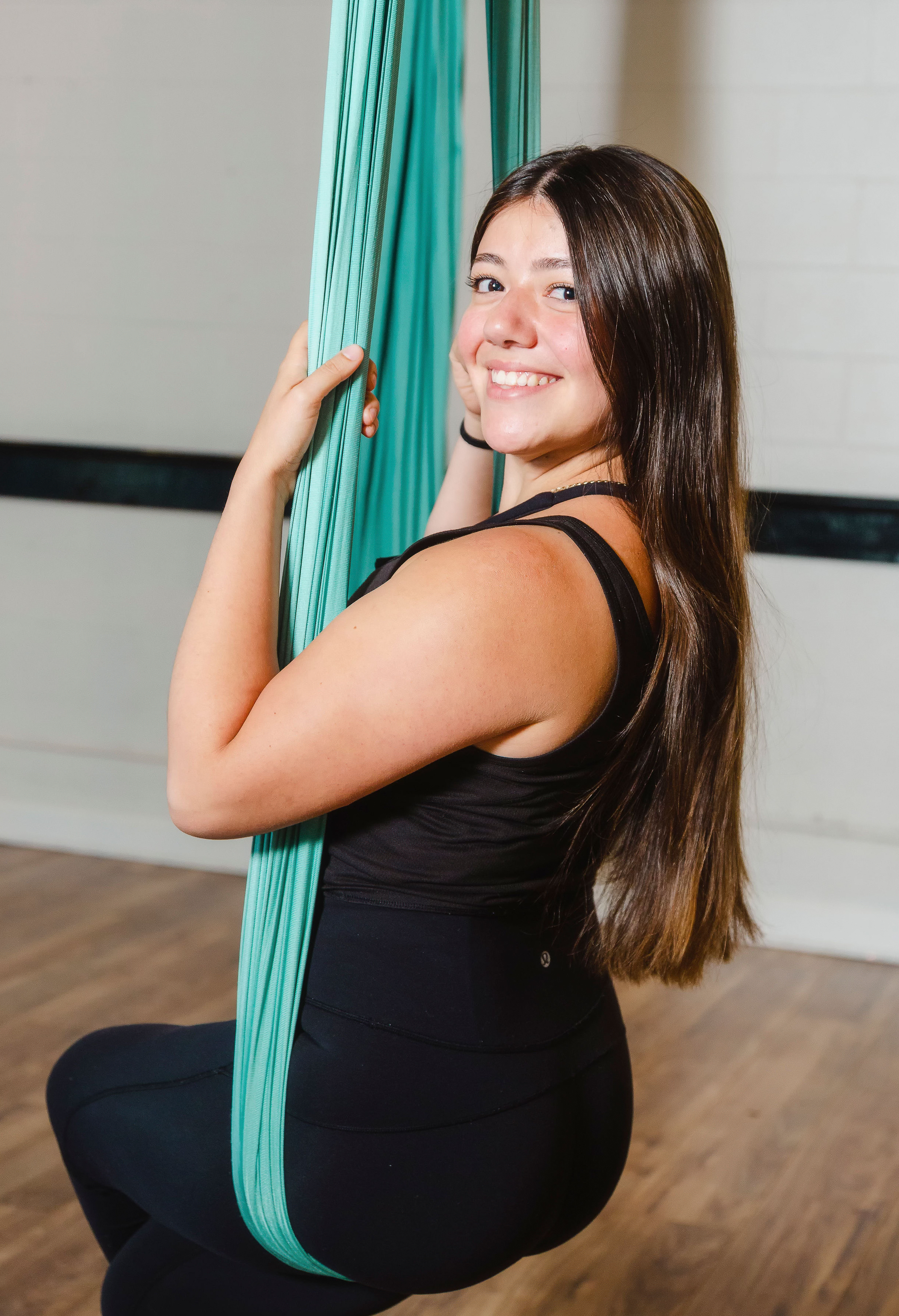 Ruby Negrete poses on an aerial hammock in her South Loop studio. Photo courtesy of ViolettaPhoto

Where were these fitness classes that you were going to?

“It was always this big thing. We’re going to River North on a Saturday or Sunday for a $10 community class. And it’s going to take most of the day because we have to drive to River North.”

Why not go to fitness classes by your house?

“There were none. I grew up most of my childhood in McKinley Park, which is, you know, on Archer, it’s just a commercial street. A lot of restaurants and a lot of McDonald’s, a lot of taco spots, a bunch of Dunkin Donuts.”

Why do you think that is?

“I’m sure everybody has their theories. I think part of it is, I honestly feel like a big part of it is people think that low-income communities don’t have the disposable income to spend on higher end gyms, which I feel is just not true.”

Ruby is now the owner of the AIR Aerial Fitness studio in the South Loop. Air falls under the category of boutique fitness. A boutique fitness studio is a smaller gym that offers intimate classes generally specializing in certain exercises. These are your Soul Cycle and Orangetheory Fitness, among others.

Despite being from a low-income, predominantly Latino community, Ruby was able to immerse herself in the fitness industry and ultimately become owner of her own studio. Other Latino health businesses that have decided to open up shop on the South Side of the city have faced their share of tribulations.

“I was born and raised in Little Village and that actually was what inspired us to open our business,” said Patty Medina, co-founder and owner of Core Juice Bar.

Core’s cold-pressed juices, vegan smoothies and healthy snacks won over the community when  they celebrated the opening of a second location in Brighton Park in 2018. But the initial opening of Core didn’t come easy to the siblings.

“We were in our early 20’s, banks didn’t want to fund us. We didn’t seem credible, our mission didn’t seem very credible,” said Medina adding that, “bankers would ask us, ‘You really think this is going to be successful in a community where people would rather go to McDonald’s, spend $5 on McDonald’s than purchase a green juice?’”

Bankers would ask us, “you really think this is going to be successful in a community where people would rather go to McDonald’s, spend $5 on McDonald’s than purchase a green juice?’”

Medina and her brothers were forced to fund their business venture with personal savings and family contributions.

A 2021 Stanford Business study found that the odds for Latinos to be approved for a $100,000 loan were 60% lower in comparison to their white counterparts. That same study also shows that Latinos are often required to offer up more collateral compared to white business owners.

Against financial odds and a pandemic, Core Juice became a staple in the community and could soon be a staple throughout the city.

“One of our goals is to be able to put our juices in local supermarkets so we are able to continue our mission of making healthier alternatives more accessible to underserved communities in Chicago,” said Medina.

Accessibility to health and wellness has long been a problem within the Latino population. A recently published study by the CDC puts 32% of adult Latinos in the country being physically inactive, the largest demographic percentage.

“There’s just a really huge disconnect about what it means to be healthy and how to be healthy,” said Christian Ureña, first-year public health and community health sciences master’s student at the University of Illinois Chicago.

Ureña grew up in the Ukrainian Village neighborhood of Chicago but was engaged in physical activity from an early age in part because of his father and one community organization. 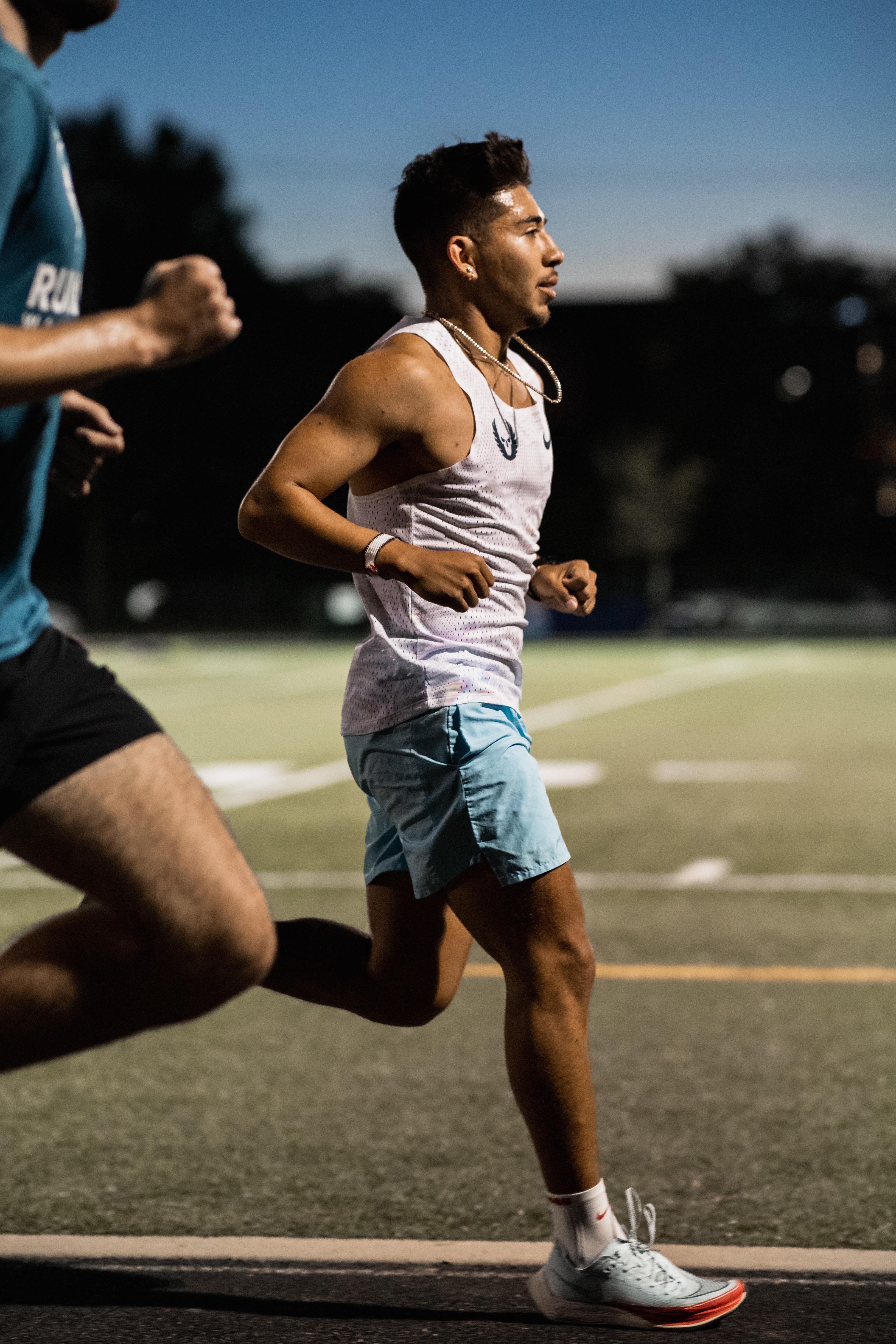 “I feel like I have a kind of unique case,” Ureña said. “A nonprofit called Chicago Run in the city that I’ve participated with since I was in the fourth grade — they had a really big impact on me.”

Fitness options are centralized in the North Side of the city with few options left in underserved communities. Chicago Run aims to connect marginalized youth with equitable and inclusive programming and in turn engage them in physical activity. For Ureña, this gave him access to fitness opportunities and today, he is an Orangetheory Fitness ambassador.

Disenfranchised youth in the city don’t all have access to programs like Chicago Run and recent civil unrest has spotlighted structural inequalities in all facets of daily life including fitness.

Robin Samples, founder of BareFeet Power Yoga in the West Loop, implemented a pay-what-you-can program at her studio during the pandemic.

“There was a lot that was going on at the time,” Samples recalls, “with the Black Lives Matter movement, that was a huge initiator to this.”

BareFeet encourages newcomers to reach out via email to work out a price “if the price you prefer to pay is not listed.”

“This was our way of just leaning into what we thought people needed, supporting our community, and then hopefully, continuing to make yoga more accessible and just greater that reach,” says Samples.

Implementing models like the one at BareFeet has the potential to reach communities of color. However, there is a desperate need to fund and support Latino businesses looking to serve their own communities with healthy options that don’t require a trek across the city.

For Ruby, community outreach is one of her goals as she looks to open a second AIR location.

“Even if you have communities and family members who can’t afford it, that doesn’t mean that they don’t deserve it.”