A Positive COVID Test and an E.. 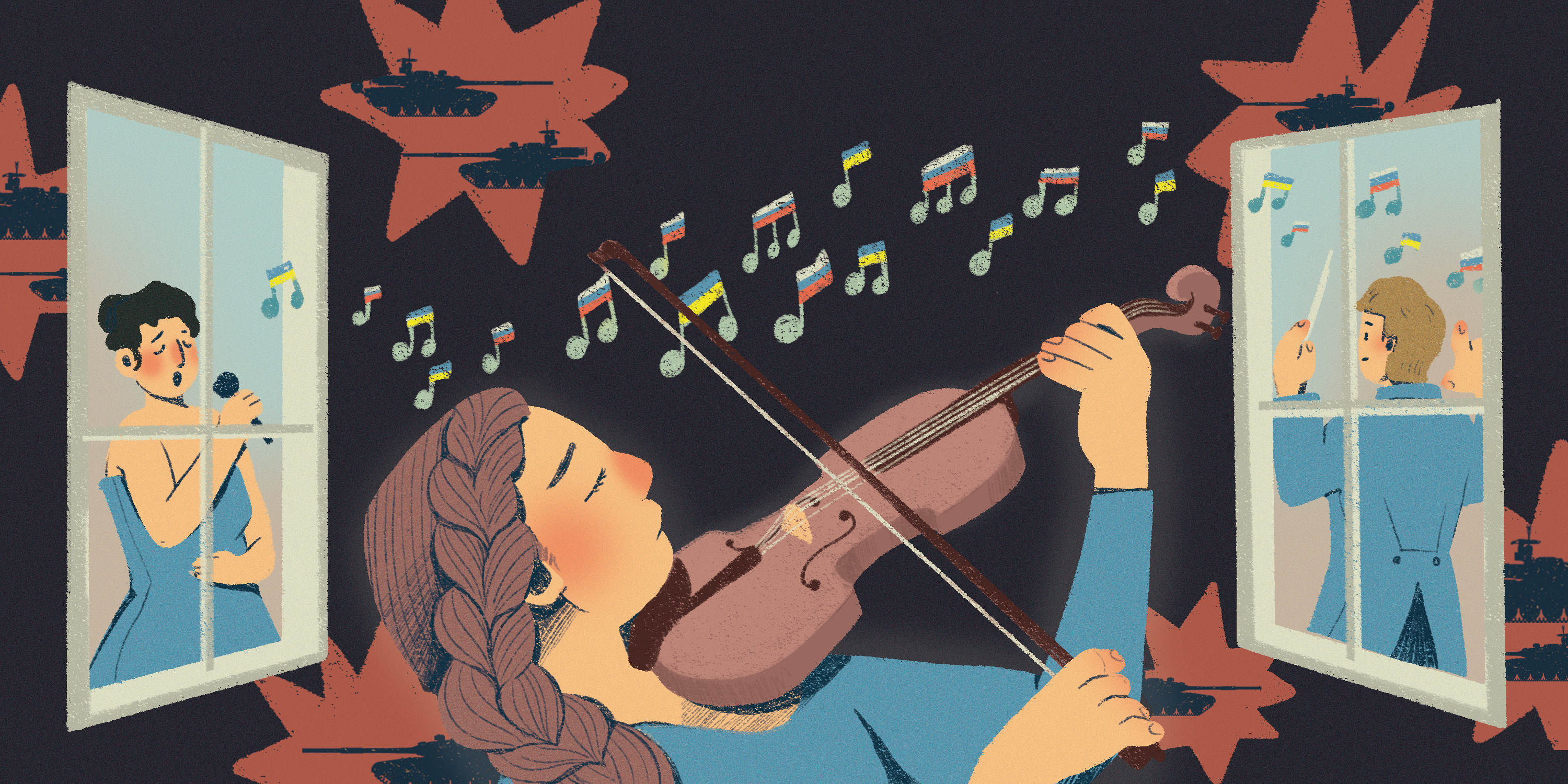 “I [am] afraid that we cannot perform their music because the audience and society will not understand us.”

The dirt scuffs up against the soles of Kharkiv-based violinist Vira Lytovchenko’s shoes as she walks across her basement floor to a lonely chair to practice.

After the Russian invasion of Ukraine, musicians across Ukraine have been forced to adapt while the rest of the world embarks on cultural warfare — the use of the arts as a cultural weapon.

“Today I’m shaking after hearing any loud sound,” Lytovchenko posted to Instagram. “And because my flat has been without window panes for a month now, all the sounds from the street can be heard very loudly. So I decided to practice violin in the basement, there I almost don’t hear sirens, shellings and explosions.”

However, the transition to basement life isn’t the only obstacle Ukrainian musicians face. While some have found alternative venues to perform in — such as bomb shelters — major orchestral performances have become a rarity, making performance opportunities limited.

“And because my flat has been without window panes for a month now, all the sounds from the street can be heard very loudly. So I decided to practice violin in the basement, there I almost don’t hear sirens, shellings and explosions.”

Despite the financial complications from the war, Executive Director of the National Symphony Orchestra of Ukraine Alexander Hornostai told 14 East the orchestra is “ready to continue [their] activities once after the war.”

Classical music isn’t only about performing pieces of romance like Anton Bruckner’s Fourth Symphony or a re-enactment of an opium trip told by Hector Berlioz in his piece “Symphony Fantastique.” It is also about community and education.

Lytovchenko takes a seat and opens up her laptop while putting her earbuds in and calls into a video chat violin lesson with her student.

While virtual learning is nothing new for music education after the COVID-19 pandemic swept through the world, it has allowed music education to continue once both parties got to safe spaces to do so. However, not everyone is fortunate enough to have such resources.

“The schools and universities work online, but not all students and teachers have conditions[s] to work, many of them left Kharkiv, some of them lost their apartments, some of them live without good internet or without electricity,” Lytovchenko told 14 East in an email.

At the beginning of Dimitri Shostakovich’s fifth symphony, you can hear the horsehair of instruments’ bows dig into the string of the cellos and violins. Starting with the cellos, followed by a response from the violins, almost as if it were a battle between the two sections. The battle shortly dissipates into an eerie aura, leaving the audience at the edge of their seats, knowing something unsettling is happening.

This isn’t by coincidence.

When Soviet-Russian composer Shostakovich wrote this piece in 1937, it was the height of Stalin’s Great Purge with at least 750,000 people facing execution and another half a million forced into Soviet labor camps called the Gulags.

Eventually, the music’s eeriness is washed away with a low horn tutti interruption, which conservatories teach students is supposed to represent heavy, looming tanks emerging into sight. After this, the tempo increases with a brassy fanfare of sorts to represent the leader of Stalin, in an effort to keep it somewhat conservative to potentially avoid getting in political trouble, while still making a statement.

According to an article by the BBC, Shostakovich was summoned for interrogation but avoided it because his interrogator got arrested before he did. As Shostakovich’s funds ran low with a 75 percent decrease in his income and a pregnant wife, he kept a packed suitcase for easy escape in anticipation of his arrest.

“It is hard to imagine what that kind of fear must feel like,” conductor Mark Wigglesworth wrote. “It is impossible to know what it must feel like as a permanent condition of life.”

Through a historical lens such as Shostakovich’s work, it is evident that war has an impact on the arts.

University of Wisconsin–Milwaukee Professor of Musicology and Ethnomusicology Gillian Rodger made it evident that nationalism and pride have a lot to do with it. In fact, Rodger told 14 East that during the Cold War, there was not only the immediate threat of physical warfare, but cultural war as well.

“One of the things that happened was a whole series of exchanges and cultural outreach, where on one hand, musicians and culture makers wanted to say, ‘what we [were] doing was, in fact, encouraging peace by interacting with each other,’” Rodger said. “But they were often funded by their home governments, because they wanted to show the cultural superiority of their own particular political system.”

According to Rodger, Soviet artists would take the trek over to the United States, and, vice versa, American artists would do the reverse to show their superiority.

“They were tours by all manner of musical groups into Europe into Eastern Europe and into the Soviet Union, as a way of demonstrating the superiority of the American system that allowed for more freedom of choice,” Rodger said.

Rodger said they did this through jazz. Known for its swing style, loose rhythmic interpretations, and roaring saxophone and trumpet melodies, the genre is also notoriously American. Around World War II, American cultural leaders used this to show how “free” America is, which Rodger finds quite ironic.

“Jazz was seen as something that could only happen in a quote-unquote, free society,” Rodger said. “And it showed the superiority of the American system, which of course was somewhat ironic in the 1950s, at a point where African Americans had limited rights in the United States, they were also starting to be used … as an emblem of the freedom of the United States.”

This use of the arts to display superiority is still prevalent today.

The World Embarks on Cultural Warfare Once Again

“Specific information on all cancellations and replacements will be communicated in the next few days, taking into account the instructions that will be given by the government. The concerts of the Orchestra of the Mariinsky Theatre and Valery Gergiev scheduled for 9 and 10 of April in the Grande salle Pierre Boulez are already canceled.”

In addition, Russian Pianist Denis Matsuev was also removed. This was one of the first cancellations to happen since the Russian invasion of Ukraine. Gergiev is a known ally of Putin and has been closely acquainted with him for three decades.

Since then, Gergiev has been fired from his primary position of chief conductor at the Munich Philharmonic after he refused to denounce Putin.

However, even those that are denouncing Putin are receiving the vrunt of the blow.

Russian Soprano Anna Netrebko stood up against the Russian invasion of Ukraine. To this, she was called a traitor and faced several cancellations in Russia, such as the Novosibirsk State Academic Opera and Ballet Theater, on top of international cancellations at the fault of Russia’s actions concerning Ukraine.

“You can’t call it anything other than betrayal,” Vyacheslav Volodin, chairman of the State Duma of the Russian Federation, wrote of Netrebko on his Telegram channel. “There is a voice, but no conscience. The thirst for enrichment and glory outweighed the love for the motherland.”

Hornostai told 14 East it will be difficult for the National Symphony Orchestra of Ukraine to associate their repertoire and soloist choices with those aligning with Putin’s Russia.

“It will be really impossible to invite Russian artists, conductors and soloists [who] supported Putin,” Hornostai said. “Also, I [am] afraid that we cannot perform their music because the audience and society will not understand us.”

Meanwhile, in war-torn Kharkiv, Lytovchenko makes her way down to the subway stations, which the orchestra of the Kharkiv State Academic Opera and Ballet Orchestra has been calling their concert hall.

The orchestra conducted by Yuriy Yakovenko has performed 20 concerts in their new transportation-themed hall this spring. Lytovechenklo told 14 East that these stations also serve as bomb shelters, and a place many now call home.

The spirit of Ukraine continues as the string players stand tall on the subway steps playing the music of Ukrainian composer Myroslav Skoryk.

Lytovchenko has raised over $20,000 to support Kharkiv’s musicians on GoFundMe. To support Lytovchenko’s efforts check out her GoFundMe page or donate through PayPal at vera_violini1@ukr.net.