The Danger of Florida’s ‘Don’t..

An Open Heart for Endless Drea.. 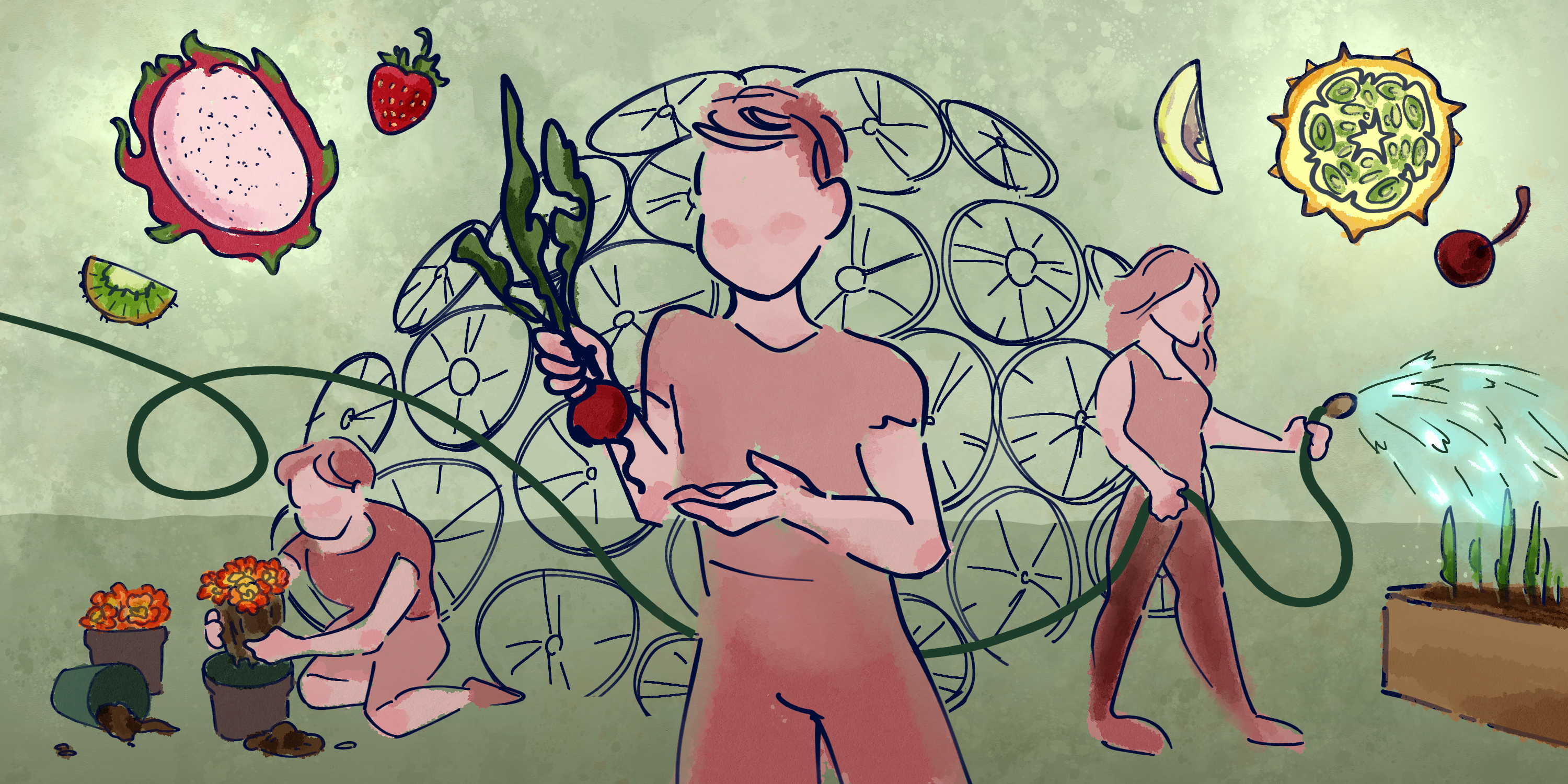 The DePaul Urban Gardeners Club (DUG) had spent most of the past school year getting back to business and returning to nature. They have hope that as many of their members prepare to leave DePaul behind, the upcoming generation will keep the garden flourishing. 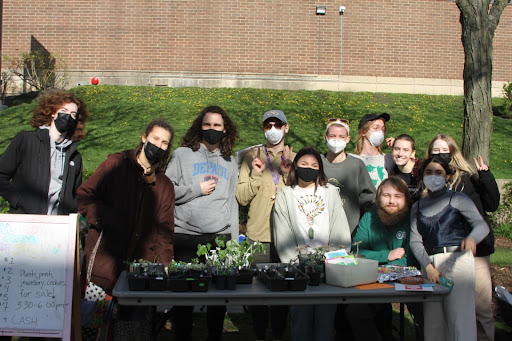 Members of DePaul Urban Gardeners Club pose at their fundraising table on the Lincoln Park campus on May 4. “We sell plants and anything that DUG members may donate to sell,” Gallant said. Photo by Monique Petty-Ashmeade, 14 East

Lukas Gilkeson, a newly graduated senior and environmental studies major, has been a long-time member of DUG and recalls joining the club back in 2018 during a time when he believed a generational shift was taking place.

“I got involved my freshman year…I was really lucky to find out about the garden because I realized not a lot of people were aware of it even in the environmental department. So four years ago there was another student, Tyler Belgrades Brown, along with a bunch of other people: Annalise Nordgen, Maddy Robertson, and Manny Fernandez, who’s still here. But what happened was five years ago, a year before the seniors got here, there was a bit of a generational shift, where an old kind of team of the board graduated and a bunch of freshmen came in.” 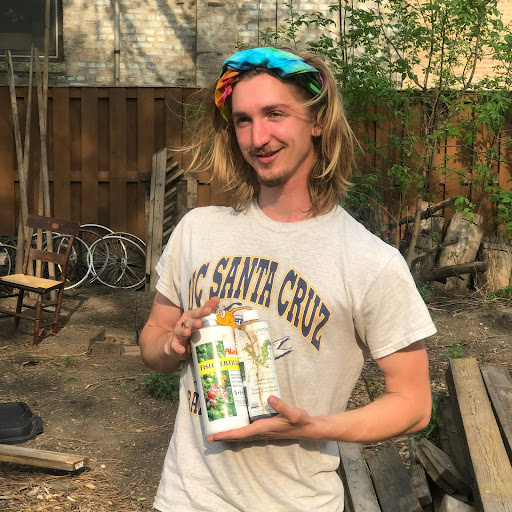 Lukas Gilkeson, a DePaul senior and Urban Gardeners Club member, displays some products they use in the garden. He joined the club as a freshman in 2018. Photo by Monique Petty-Ashmeade, 14 East

Gilkeson explained how, thanks to Belgrades’ creativity, the garden now has a bicycle dome where they often kick off their weekly meetings.

“It was wonderful because when I did find the club, I was met with a new generation of people who were motivated to cultivate a safe and welcoming community.”

“So they went in and cleared out everything, built new beds, and got all these wheels from working bikes…and when I got there we were building the dome and building the beds and putting them in four years ago,” said Gilkeson.

Gilkeson emphasized that the bicycle dome in the garden is a central part of the club’s circular theme and of DUG’s overall mission on campus of creating a safe and welcoming space.

Gilkeson expressed the application of the garden in both practice. Whether students want to utilize the garden as a green space to relax and not get their hands dirty or student organizations want to collaborate, Gilkeson wants to see people from all departments enjoy the garden. 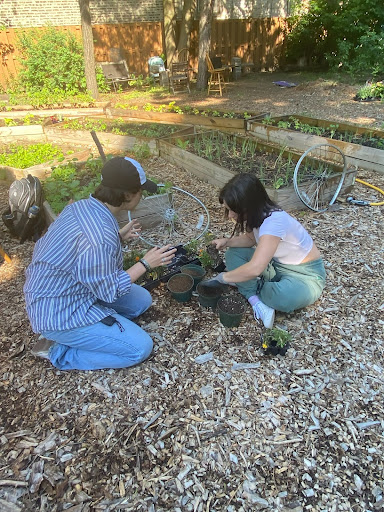 Grace Gallant, a rising senior majoring in sociology and double-minoring in peace, justice and conflict studies (PAX) and environmental studies, serves as the club’s head of communication. Gallant recently joined the club this past school year and explained how the club allowed them to become more immersed in nature.

“I heard about DUG through some friends, and in the city it’s nice to be around plants when I can, so I started going to the winter meetings when we started growing mushrooms and having meetings in the greenhouse of the McGowan South building. I joined the board some time towards the end of winter quarter,” Gallant said.

Throughout the school year, the club has managed to grow a plethora of vegetables and herbs including rhubarb, parsley, dill, chives, eggplants and bok choy. They occasionally even make food from the items they grow in the garden. During my first visit to the garden, I was offered rhubarb bread that was made from the rhubarb the club had recently picked. 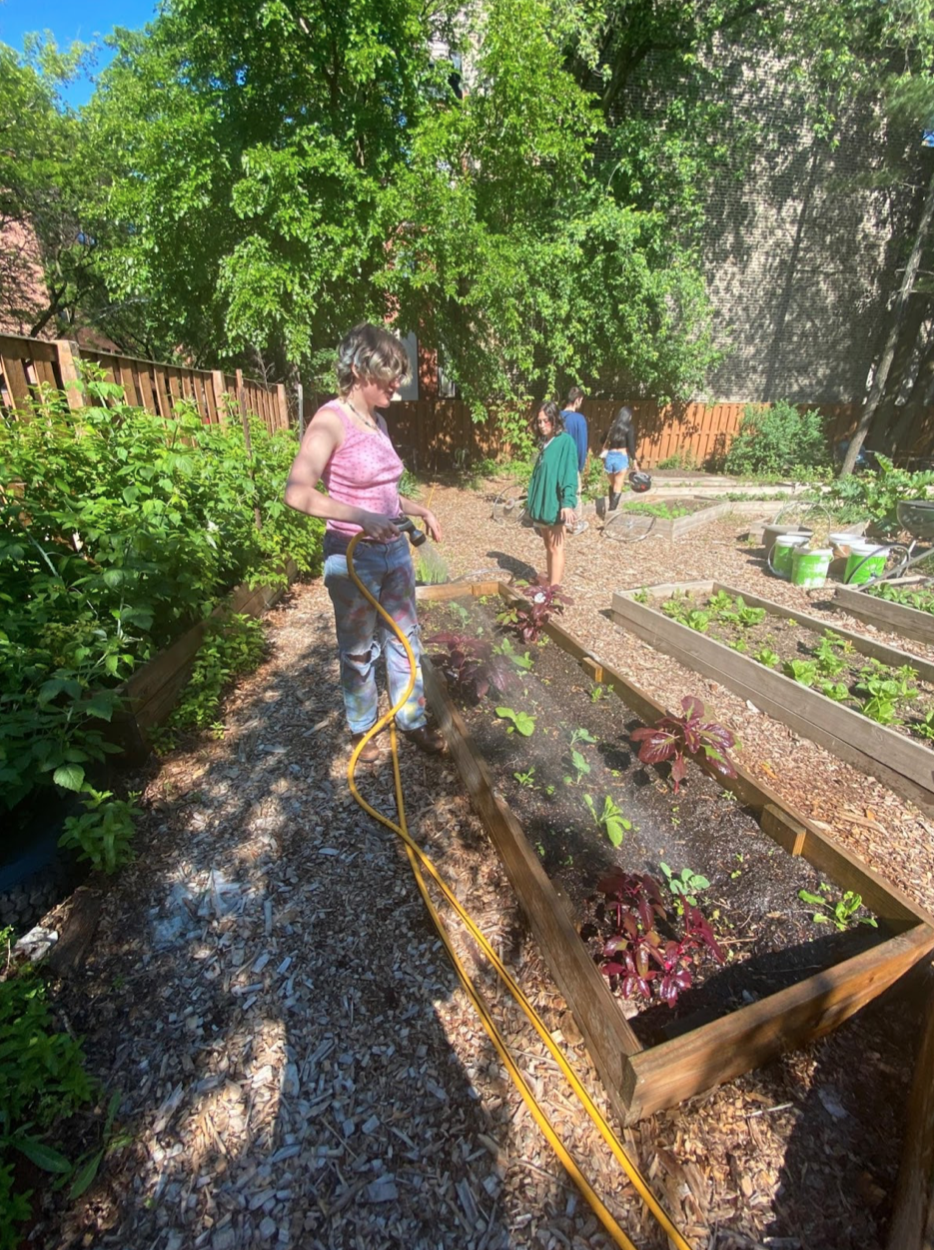 At the end of the 2021-2022 school year, DUG invited students to be a part of their end-of-the-year fruit party, where members were encouraged to bring fruits or a friend and simply enjoy nature. The garden was bustling with members and volunteers who all gathered in chairs varying in size under the bicycle dome.

It was there that students indulged in fresh fruits ranging from freshly cut dragon fruit to strawberries, engaging in conversation about the school year, graduation and upcoming summer plans. The spirit felt welcoming and even during the celebration members’ love and appreciation for nature didn’t cease. In one area there was Gallant weaving throughout the garden, hose in hand watering each section of plants and playfully spraying water at members. In another, people were repotting marigolds because they didn’t want them to dry up and wilt away. Members such as Gilkeson let some of us try freshly picked and washed radishes that they had grown in the garden. The sense of community was radiating throughout the space. 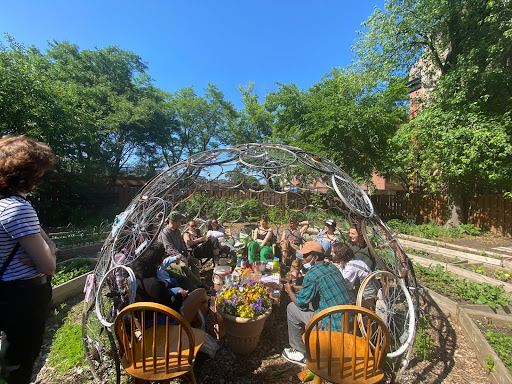 DUG members and friends gather for the end of the year fruit party in their garden on June 7th Photo by Monique Petty-Ashmeade, 14 East

Despite this school year ending, Gallant expressed that there are many plans in motion for the upcoming school year and the future of DUG looks bright.

“We want to broaden our horizons and get more people from DePaul to join, especially students who don’t get time to have time in nature or with plants,” Gallant said. “We also have a lot of plans for building  areas to wash food. We’re building a table so that we can have more events in the garden like a pickling partyf, and we also want to continue doing events such as fundraisers where we sell plants and anything that DUG members may donate to sell.”

DUG represents a community where Gallant hopes to make everyone feel heard and included, and you don’t have to be an expert in gardening to drop in. If you’re interested in learning how to create a personal urban garden, Gallant explained that the best way to pursue it is through searching up local gardens in your area, possibly purchasing a small plot to grow your items and some seeds. They expressed that if one is interested in DUG, members are always prepared to teach newcomers how to take care of their garden and grow whatever they want.

For the spring quarter, DUG met twice a week in the garden located across the street from McCabe Hall in Lincoln Park. During the fall and winter quarters they meet in the McGowan Science building near the quad. If you’re interested in joining and want to stay up to date with the club and its activities, Gallant advises people to sign up through DeHub to receive notifications and newsletters or simply follow their Instagram to stay in the loop.

Whether you stop by once a week or once a quarter, you will always be considered a part of the DUG community.