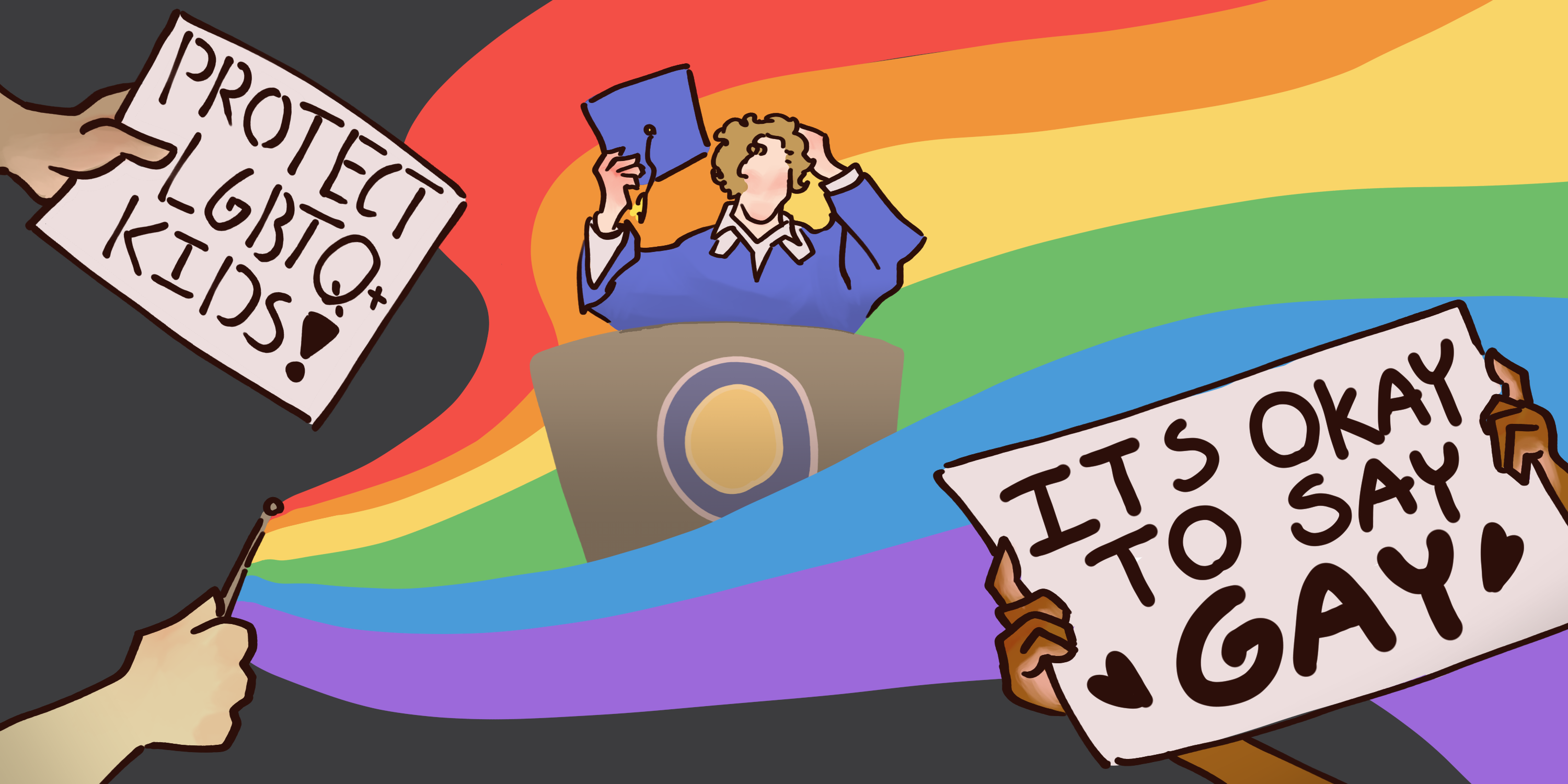 Florida students and activists are speaking out against new laws targeting LGBTQ+ youth.

A queer kid feeling out of place in high school is unfortunately not an uncommon experience. Having to deal with the everyday experience of walking down the halls being greeted by lingering stares and slurs nonchalantly spread by classmates.

The “Parental Rights in Education” bill, commonly being referred to as the “Don’t Say Gay” bill, was signed March 28 by Florida Governor Ron DeSantis and went into effect July 1.

The “Don’t Say Gay” law compels school staff to inform parents about their children’s sexual orientation and gender identity and restricts teaching about these topics. The part that is conspicuous to most people is its limit on discussing sexual orientation in a classroom setting.

According to the Florida House of Representatives website, it is the district school board’s responsibility to instill these rules so that parents are involved in “students’ mental, emotional, or physical well-being” and if the rules stated in the law aren’t followed by the school, parents have the right to fight back and silence instructors by suing school boards that violate this law.

The bill is being viewed as attack against queer students, and in turn there has been a reaction from Florida schools and activists.

Recent graduate of Pine View High School, Zander Moricz’s reaction to the bill within his graduation speech made a viral impact over the internet.

Moricz is the first openly gay student president at Pine View High School and when it came to his graduation speech, he faced some obstacles. He was told by his principal to refrain from using the word “gay” and discussing the bill at all. Instead of adhering to this or rebelling, he put his own twist on the speech by referring to his sexuality through a metaphor of his curly hair. His speech allowed him to speak on the issue without causing controversy or facing repercussions, and he still made an impact on queer audiences. 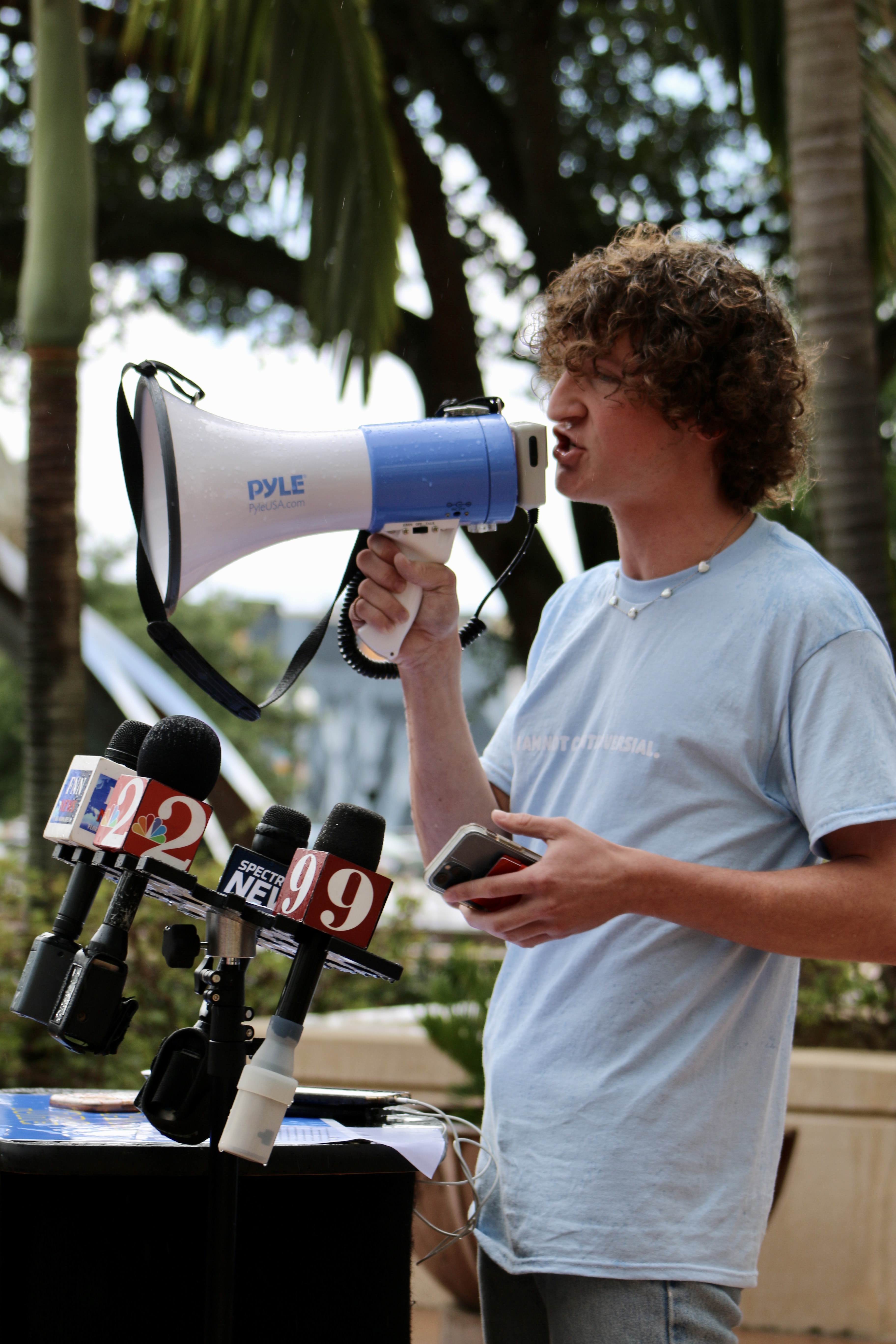 “As you know, I…” Moricz pauses for emphasis, “have curly hair.” With this statement alone, a wave of relief and laughter filled the audience, clapping as well. “I used to hate my curls, I spent mornings and nights embarrassed of them, trying desperately to straighten this part of who I am … so, while having curly hair in Florida is difficult, due to the humidity. I decided to be proud of who I was.”

According to Moricz, peers know him for being extremely outspoken, so his restraint within the speech was impressive and slightly shocking.

The speech was meant to help Moricz share his own experience, but also to paint a picture of the grim future for queer students when DeSantis’ bill goes into action.

“I’ve been preparing for this speech since I was elected my freshman year, did you think I wanted it to be about this?” Moricz says. “It needs to be about this for the thousands of curly haired kids who are going to be forced to speak like this for their entire lives as students.”

Moricz’s speech receiving so much attention was not something he was prepared for. Still, he now takes the role of being the face against the law and is leading with passion and commitment.

“It’s very much life or death,” Moricz explains. “This is an urgent, sirens-blaring emergency and we need to act like it. We need to mobilize, we need to organize like it because this deserves a strong, sweeping, everyday permanent response.”

The law in itself is shocking but another aspect Moricz is worried about is the unclear language.“It’s already affecting people, people are already reacting, because it’s written to be abused.”

It’s becoming clear, this is not just one instance of attacking the younger LGBTQ+ community in Florida. There appears to be a deeper problem rooted in the homophobic policies of Florida Gov. Ron DeSantis that allow for others to feel comfortable spreading homophobia as well. 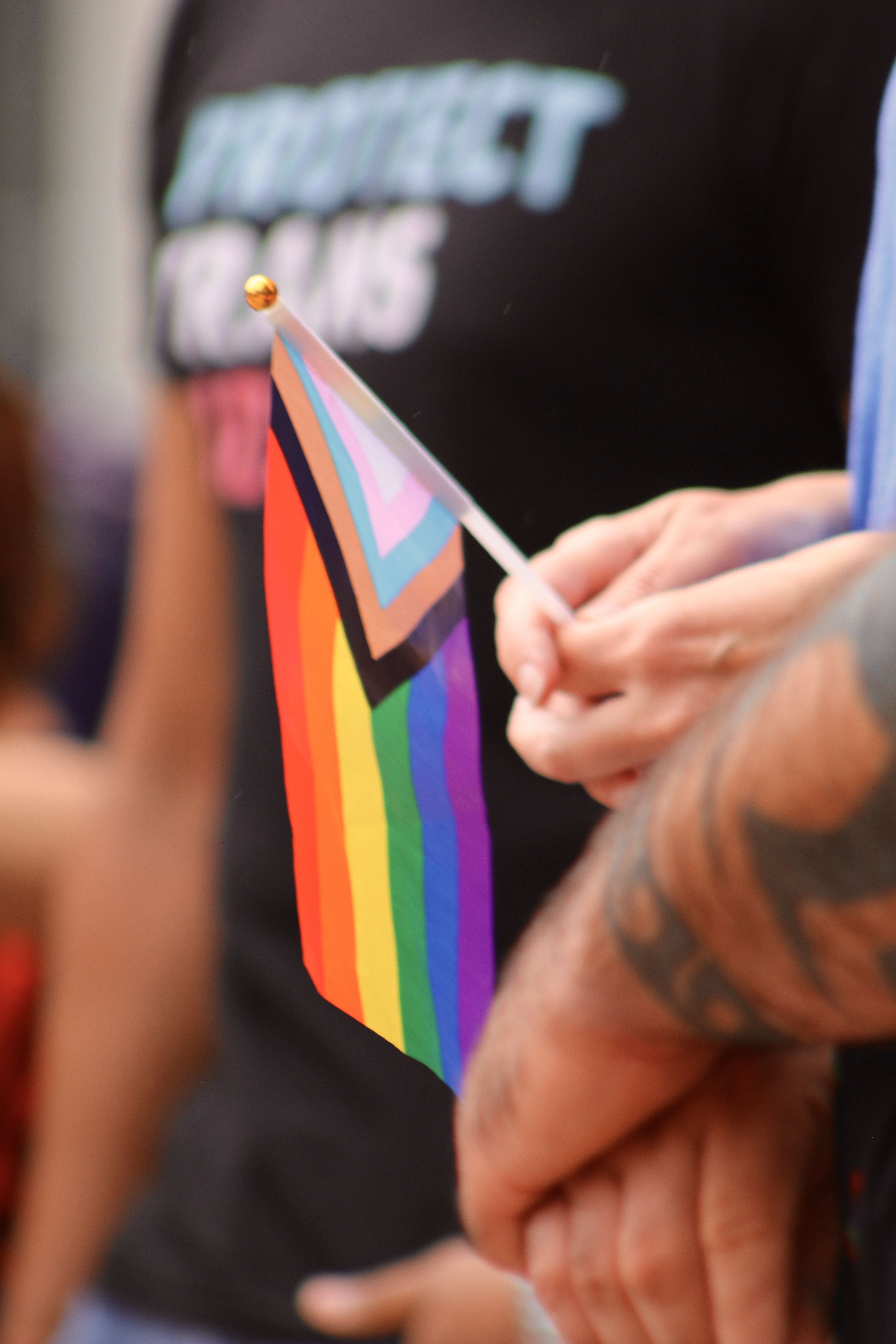 A protestor holds a LGBTQ+ flag at the Rally to Remove Ron. Photo courtesy of Madi Koesler.

The “Don’t Say Gay” law is not the only instance DeSantis has seemingly attacked queer people. He targeted LGBTQ+ youth again by pushing for a ban on gender-affirming health care for transgender minors. If the ban goes into effect, Medicaid would not be able to cover transgender health services such as hormone therapy or gender reassignment surgery. DeSantis was not only targeting trans youth but also those with low income who can’t afford these services and require financial assistance.

As a queer person who spent kindergarten to my senior year of high school in the Florida public school system, I know first-hand how isolating and unsupportive it can be. Now that I am out of it, the decisions being made for current students still hurt me. I think about what my younger siblings will have to endure or any queer student in school who feels unheard.

It’s not just me either, Madi Koesler is an alumni of Lyman High School, located in Longwood, Florida. Koesler recently had to face her own photographs of a “Don’t Say Gay” protest being possibly censored in the school yearbook.

The Lyman High School yearbook team was set to release the yearbook for the 2021-22 school year when the principal halted distribution due to the inclusion of photographs from a protest held at Lyman. Principal Michael Hunter announced to students that the halting of the yearbooks was due to the event being non-school sponsored and it being included in a school publication. 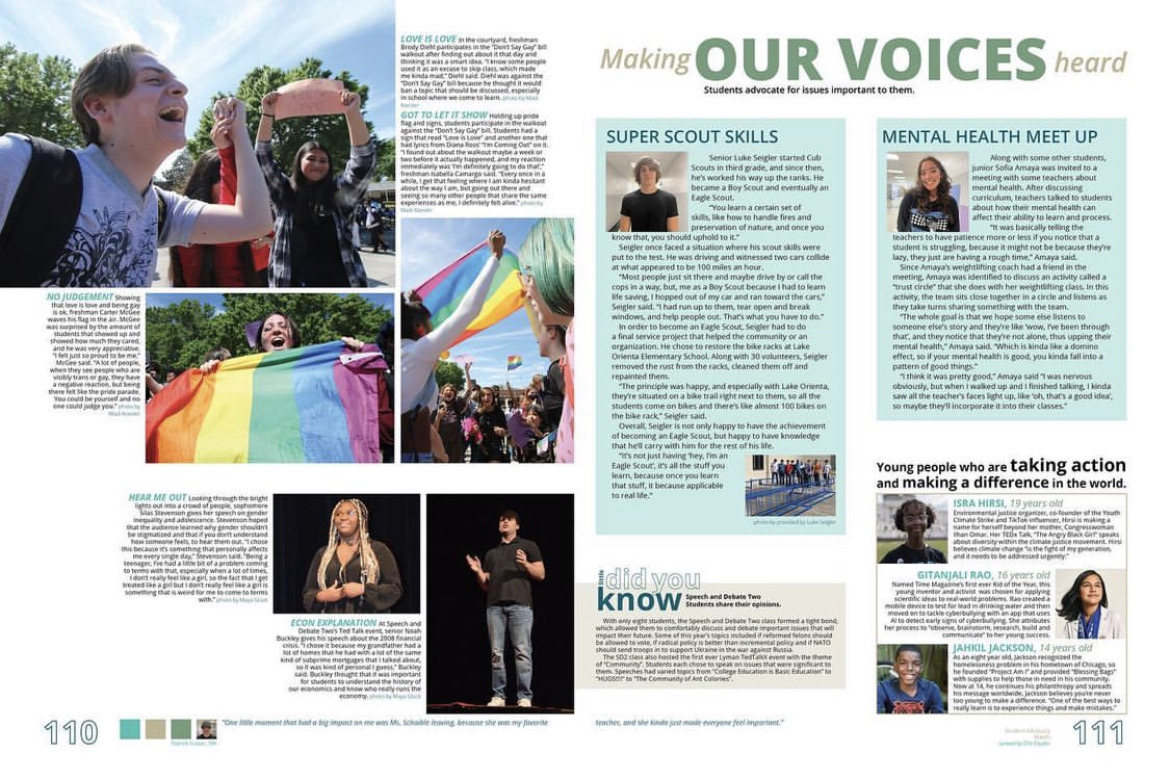 This series of events not only brings up a discussion of the discrimination and inherent homophobia within the Florida school systems and within the government that rules over it, but now a discussion of censorship and First Amendment rights.

How far will the harassment go until students have no rights? Students already are beginning to fear speaking out about their identity when it is something they have no control over. How will this affect the quality of education in Florida? How will students learn in an environment that is being censored and removed from its diverse points of view?

“It’s just disheartening because we should be preparing students for the real world, and these are student journalists,” Koesler explains. “We should be upholding them to the standards that all other journalists meet. Not giving in to sensitive parents and bullies by censoring kids.”

Koesler mentioned being involved at other protests like the “Rally to Remove Ron” which was another example of Floridians coming together to speak out against DeSantis’ discriminatory decisions. The rally was on the first day of pride month and was held to address the governor’s lawmaking that targeted LGBTQ+ people and POC communities.

It’s not just that students are compelled to take action but that they feel a responsibility to do so. For them, this is more than one law. Decisions like this set a precedent for the rest of the country and encourage the creation of more targeted bills and laws. And it has already begun. 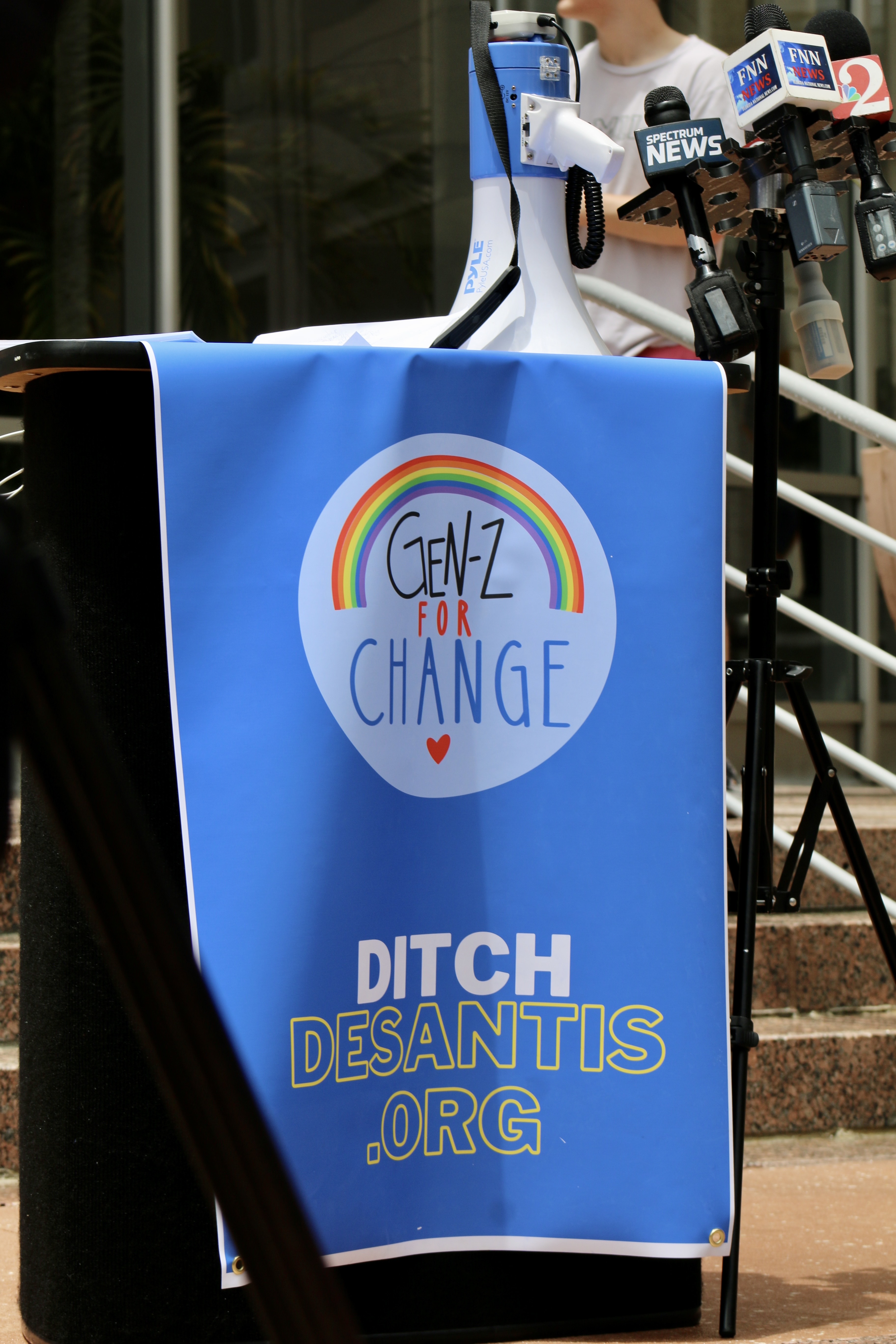 In an article published in Them, Samantha Riedel wrote about a bill implemented by the Leon County School Board in Florida that “Upon notification or determination of a student who is open about their gender identity, parents of the affected students will be notified of reasonable accommodation options available.”

The bill was made in an attempt to protect LGBTQ+ students, which to its credit some of it did, but the Florida school board seems to be missing the mark especially when it comes to trans students. It is another bill that is written with vague and confusing language that clearly is excluding LGBTQ+ students. It attempts to out trans kids and also give transphobic parents the option to have accommodations because their child may be sharing a locker room with a trans student.

Coming after the implementation of the “Don’t Say Gay” bill, schools in Florida are not afraid to include exclusionary rules like in Leon County because they know they are now protected.

President Joe Biden is aware of what is going on in states like Florida. On June 15, he signed an order that will stop federal funding of conversion therapy, which include practices that try to change someone’s sexual orientation or gender identity. Biden signed the bill while being surrounded by LGBTQ+ youth from Florida and Texas. The order is seen as a step in the right direction, moving towards more regulation against homophobic policies within the United States that have gone on too long.

It seems like all at once, homophobic legislation and ideologies are appearing across the U.S. making this bill even more drastic than it already is. In Texas, Governor Greg Abbott was calling on people to report parents of trans kids as he equates children receiving gender-affirming care to child abuse. There is also the released concurring opinion from Supreme Court Justice Clarence Thomas where he explained wanting to revisit the Supreme Court decision legalizing same-sex marriage.

As of July 19, the U.S. House of Representatives passed the Respect for Marriage Act that will federally protect same-sex and interracial marriage, but the Senate has not yet voted on it. People are seeing it as a move against conservatives who are in favor of overturning Obergefell v. Hodges (the case that legalized same-sex marriage). 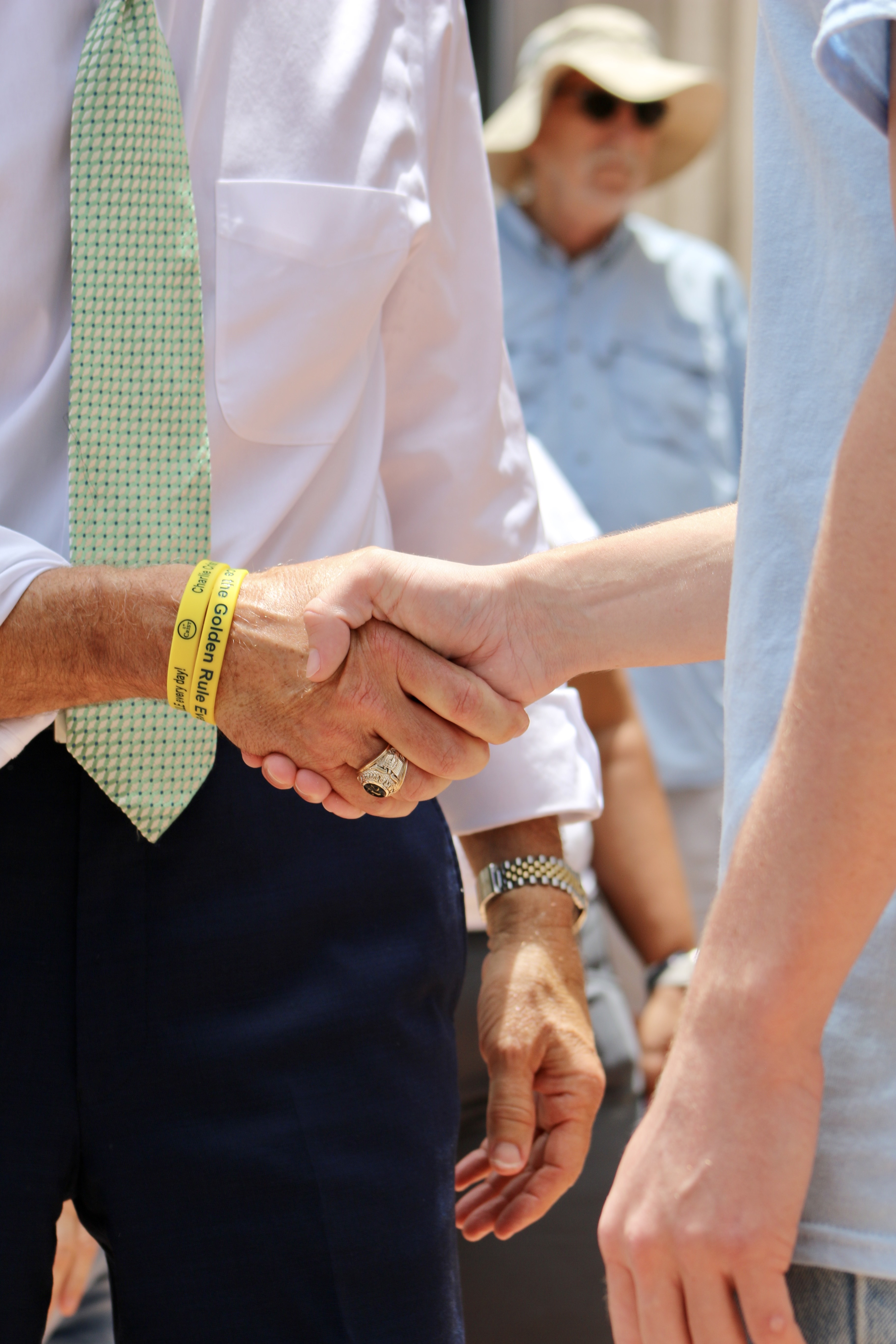 It’s a long road ahead to make real change, and federal and state governments are sending confusing signals to where they stand. Due to an increase in bills like the “Parental Rights in Education” bill, there is an urgency felt among the youth in conservative-controlled states to do something. “The kids are what matter here, this is our future generation,” Koesler explains.

This isn’t just about one bill or one governor. The decisions being made in Florida set a dangerous example of what homophobes can get away with, and that is why youth activists are taking this so seriously. It is the future for not only them but others younger than them that will have to endure a homophobic government and school system.