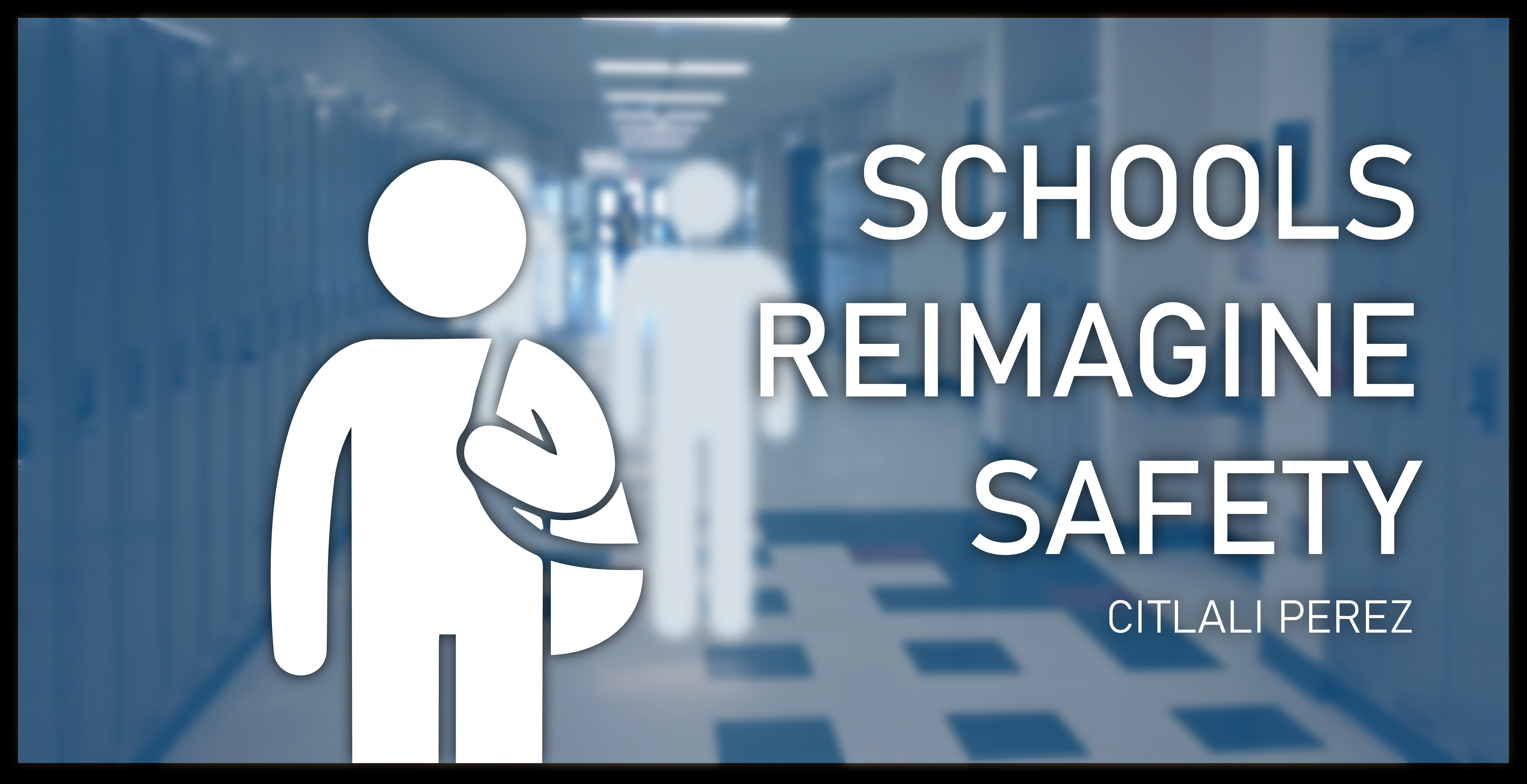 After removing police officers, schools now need to come up with a whole school safety plan

Disclaimer: One of the sources being interviewed, Rubi Mendez and the writer of this article interned at the same organization this summer.

This school year many  Chicago Public Schools (CPS) high school students returned to school with zero or just one out of the usual two police officers in their building. After two years of online learning, the adjustment hasn’t been easy.

Schools that voted to remove police officers from their buildings in the past two years were presented with the added challenges of creating an alternative safety plan while being online.

Rebecca Coven, a teacher at Sullivan High School, explains, “It’s been really hard to build a community in the classrooms this year because students spent a year and a half isolating their homes and they had vastly different experiences.”

Sullivan High School, located in Rogers Park, is one out of the 17 schools that removed School Resource Officers (SROs) from their building when Local School Councils (LSCs) were given the option to vote on the matter for the first time in the summer of 2020.

The school district gave LSCs the option to vote on whether to retain SROs in August 2020 after rejecting to end the SRO program district-wide. They also passed a resolution requiring schools to come up with an alternative safety plan.

The push for removing SROs from schools came largely from students involved in local and national efforts such as the #PoliceFreeSchools campaign.

The United States has a long history of utilizing police presence in schools. However, the first SRO program was implemented in Flint, Michigan, in 1953.

Multiple incidents over the years have shown that police presence in schools disproportionately impacts students of color.

Although the program has been utilized as a disciplined approach, it is being critiqued for creating a school-to-prison pipeline, increasing the likelihood that students will get involved with the criminal justice systems.

In a 2018 report, the City of Chicago Office of Inspector General concluded that, “CPD’s recruitment, selection, placement, training, specification of roles and responsibilities, and evaluations of its SROs are not sufficient to ensure officers working in schools can successfully execute their specialized duties.”

According to Handcuffs in Hallways, a 2017 report on the state of policing in Chicago Public Schools by the Shriver Center, police officers assigned to CPS accumulated $2 million  in misconduct settlements for incidents that occurred on CPS grounds between 2012 and 2016.

These were the statistics and reasoning presented by many students such as Rubi Mendez, a recent graduate of Sullivan, who pushed and accomplished ending the SRO program at her school. 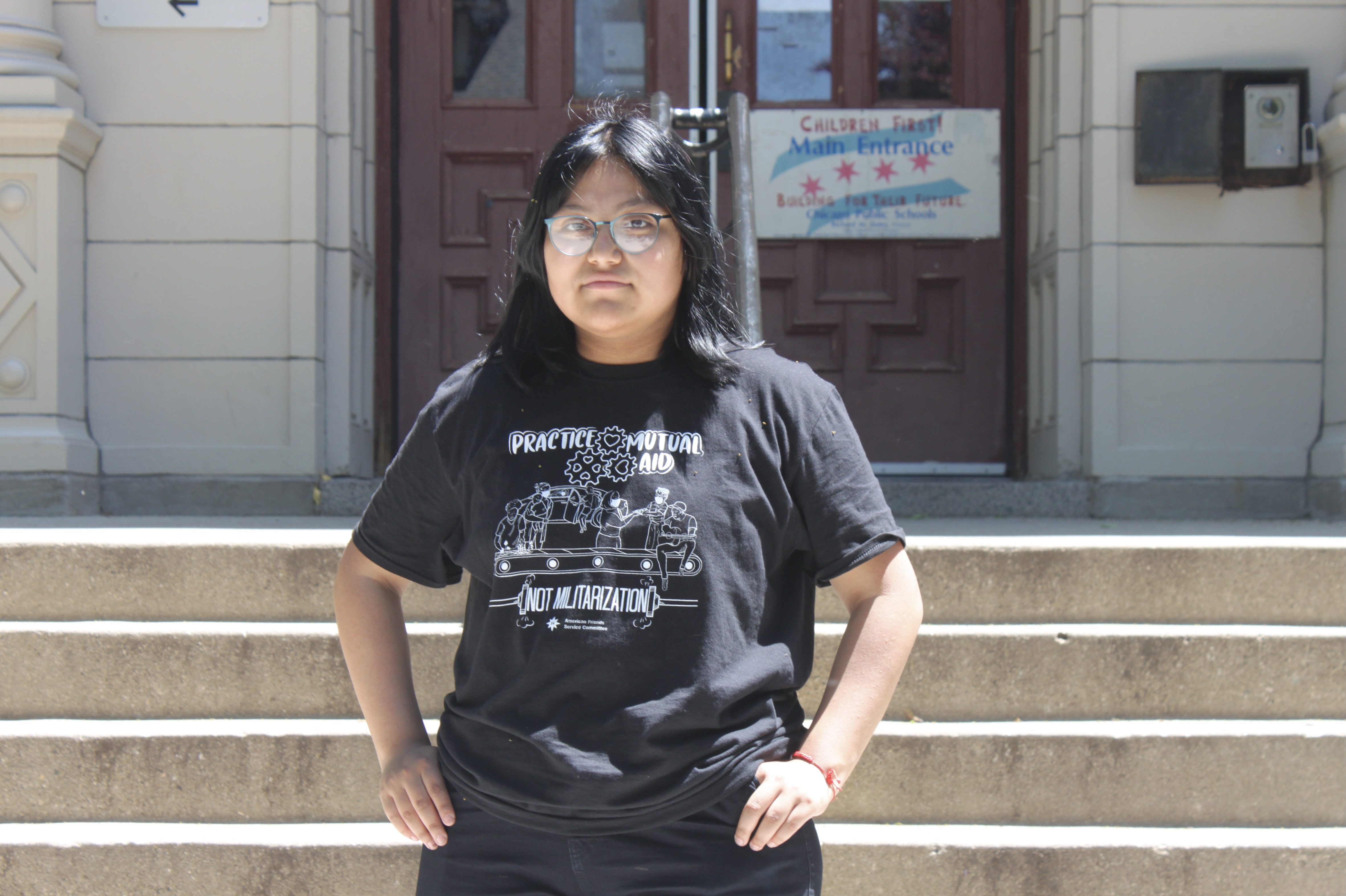 Rubi Mendez stands outside her alma mater, Sullivan High School in Rogers Park, where she advocated to remove SRO’s from her school in the summer of 2020. Photo by Citlali Perez.

Mendez explains that she received support from various teachers to talk to LSC representatives and push for the demands along with other students.

She explains that it was hard to convince the LSC. However, with a student population of 600, she says it was easy to get the word around.

Mendez says she’s trying to, “get them to think about intersectionality and all these different identities we have at school and how we can protect it, because the first problem we face is that they’re like, oh, we got the good cops at our school.”

She refers to Sullivan’s diverse population, which is made primarily up of Black and brown students including refugee and undocumented students, as well as students in Individualized Education Programs. All of these student populations have been proven to be targeted by SROs the most according to a report looking at police notifications.

Mendez returned to the building this school year to see the result of her organizing efforts for the first time and to help draft the Whole School Safety Plan as part of her school safety committee.

The Whole School Safety Planning Process was developed by CPS in response to the Board’s resolution in 2020. 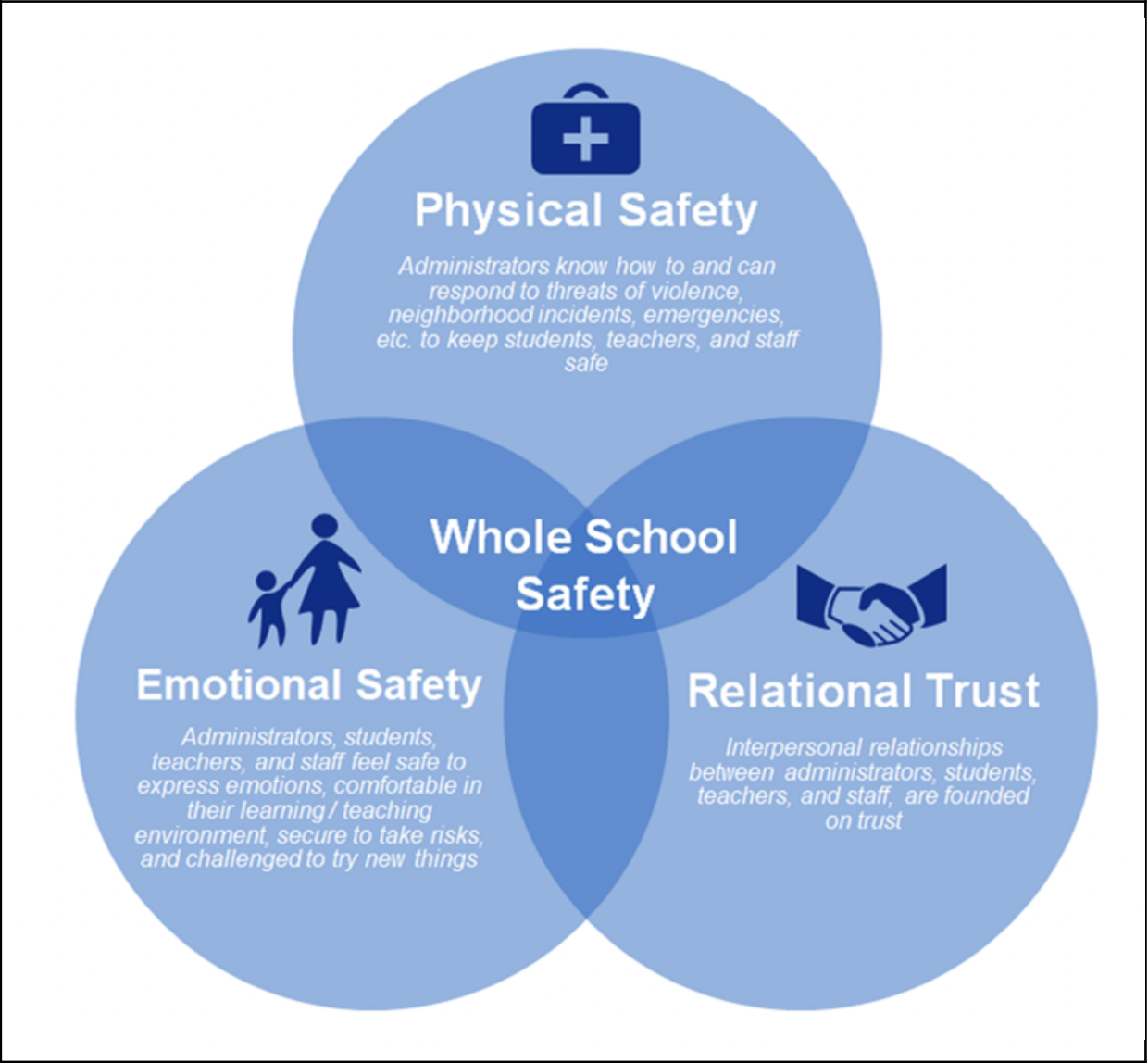 A diagram explains The Whole School safety Plan which was put together by a steering committee made up of five community organizations. The plan is an alternative to SROs and considers physical and emotional safety as well relational trust. Source: CPS Whole School Safety Plan

The process was led by a steering committee made up of five community-based organizations, which hosted engagement sessions to gather community input to develop a report with recommendations for school-specific safety committees. These committees, such as the one at Sullivan, would meet and draft a whole school safety plan.

In the summer of 2021, the 55 LSCs from schools that had not voted to remove SROs before were given the option to vote on removing both of the officers, keeping one or retaining both. They also voted on their school’s safety plan.

This time around 64% of schools voted to reduce the presence of SROs. Twelve schools voted to remove both officers while 22 removed only one. Those schools were also given around $3.3 million in funding for alternate interventions, an option that was not given to schools that ended their SRO program in 2020.

J. Cyriac Mathew is a teacher at Sullivan who ran for a LSC after being involved in the efforts to remove SROs. He says, “So, I haven’t seen any serious investment from CPS or like a real commitment to providing the kind of structures and support needed to provide whole school safety for students.” Mathew was also part of the safety committee.

Sullivan High School has been outspoken about implementing restorative justice practices in the building before the removal of SROs. The school has partnered with an organization called New Root, which provides a restorative justice manager. In addition, they provide students with a peace room to utilize when mediating conflict.

However, the peace room has not been utilized since returning to in-person learning. Mendez says, “It’s also turned into a storage room, because they’re like, we don’t need this room anymore because nothing happens in this room anyway.” She explains that the peace room is used after harm is caused instead of intervening before.

Mendez is part of her school’s social justice club where they organized for the bathrooms to be opened after they were locked to prevent students from hiding out. The club is also demanding that students be provided with a break room so they have a designated space to decompress. 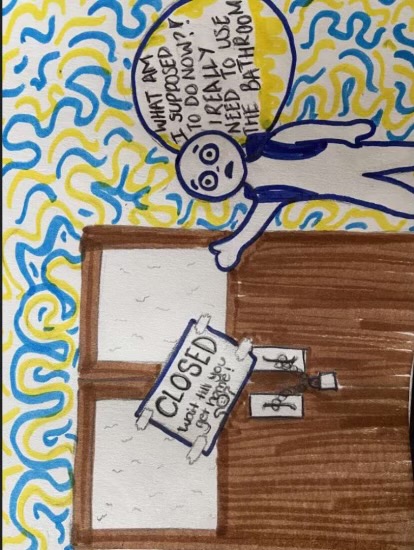 The Social Justice Club at Sullivan made cards to pass around and be signed by parents during parent teacher conferences. 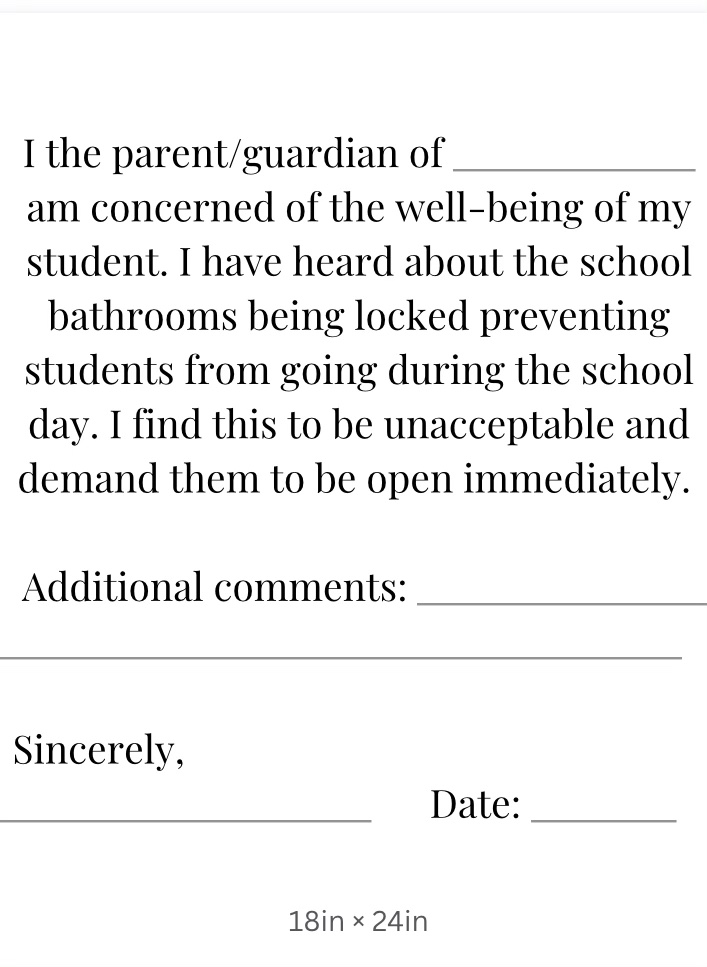 The Social Justice Club at Sullivan made cards to pass around and be signed by parents during parent teacher conferences.

Mendez says she didn’t feel like student input was taken into account in the school safety committee. However, she has been working on a whole school safety plan with other students in her global issues class taught by Coven.