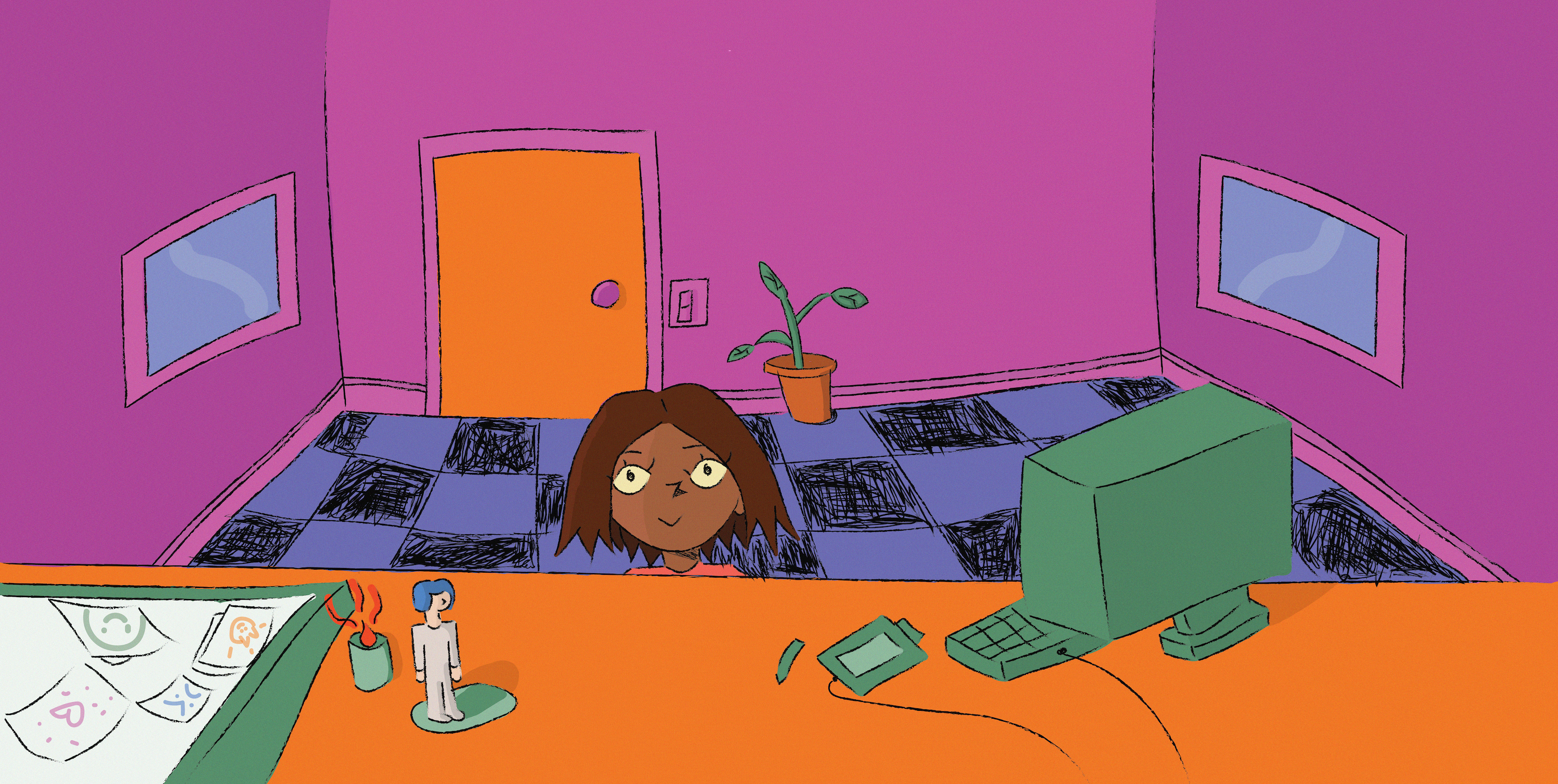 The timely themes, troubled minds and absurd humor of one of today’s foremost animation filmmakers

A suburban cat trying to make it as a hairdresser in the big city; young twins preparing for a professional tennis match as the world approaches armageddon; a gambling school counselor talking with a surly teenager, who both know their conversations will not change anything. If you have seen a short film telling any of these stories, you have seen a short from Victoria Vincent and have been introduced to one of her bustling, anxious and tilted-yet-familiar worlds.

Better known as “vewn” online, the California native has been posting her animations to YouTube and Vimeo for almost six years and has recently created short films for Adult Swim and Netflix’s “We the People” series. She is now working as a writer and executive producer on an original series for Fox titled “Dirt Girls,” although information is limited at this time.

Determining any artist’s involvement from base animation alone is difficult, but it is easy to spot when Vincent is in a higher position on a project. Her work almost always has “breathing lines,” which is when a character or object is drawn two or more times the same way without changing its position. This technique gives otherwise static shots a sense of motion, adding to her portrayal of the always-moving, always-talking state of modern — especially urban — living. Day and night, there is constant activity in her created worlds. The characters inhabiting them are a part of this flow, yet find themselves isolated from everyone around them — or experience another form of inner turmoil, either on its own or in addition to this isolation. Vincent also uses extreme perspective and skewed camera angles to exaggerate movement, establish a location or lend insight into a character’s mental state.

Along with the mundane cruelty of her worlds, the minds of Vincent’s characters are a major focus of her films. Her short “cat city” is barely three minutes long, yet it takes the viewer on a full odyssey of the feline lead’s excitement, depression and ultimate return home. As the main character becomes disillusioned by his new life, the shots and music become harsher: the walls of their cramped bedroom stretch impossibly high, the bar he goes to in order to drown his thoughts is bathed in an alarming red light and the soundtrack builds to a jazzy, chaotic crescendo. Brilliantly, sound designer Josh Yeung has a calmer jazz piece play on a radio as the cat hitchhikes home, suggesting the danger and mayhem of the city remains, albeit in a moderated, more appropriate amount.

The strength of this portrayal of disillusionment and claustrophobia likely comes from how personal some of the film’s elements are. “The story ended up reflecting many aspects of my own life experiences: leaving home to pursue independence, becoming depressed and disillusioned, being unable to sleep, turning to self-destructive behavior to cope,” Vincent said to Girls in Film.

“Cat city” is a mix of the internal and the external, although there are times Vincent can work with only the former. “kittykat96,” possibly the most internal of her filmography, details the routes a popular vlogger can take when dealing with an identity crisis. Vincent’s social media presence was much smaller when the film was released in 2017, but the conflict between a person’s “real” personality and their internet persona likely came from a personal place as with the lead’s experiences in “cat city.” As for its style, “kittykat96” contains a notable amount of intertitles, something Vincent has only frequently used in one other short, “fluffy’s third eye.” There are also a couple of shots reminiscent of a famous frame from the anime film “End of Evangelion.” It would not be surprising if these were intentional since Vincent revealed in a workstation tour that she has not one, not two, but three “Neon Genesis Evangelion” figurines next to her monitor.

Vincent’s films tend to complement each other, but her two longest shorts, 2020’s “Twins in Paradise” and 2022’s “Catopolis,” have an unusually strong thematic link. Both are, at least partially, about the importance of maintaining, or even establishing, relationships amidst turmoil in the world at large. In “Twins in Paradise,” this turmoil is the imminent nuclear armageddon; in “Catopolis,” the world has already fallen into a dystopia, but inner acceptance and bonds with others are no less important.

Despite the heavy topics in her films, Vincent often uses dry humor to highlight the absurdity of events seen in the world today. For example, in “Bobo the Monkey,” a zoo employee unenthusiastically radios, “Code red, there’s a kid in the ape cage,” just before another employee pulls out a revolver and shoots the ape dead — nevermind the fact that the ape was standing completely still in the opposite corner of the cage. Humor is also used to comment on modern attitudes, such as in “Twins in Paradise” when a government official announces on live television that he “will nuke [his] own country because God wants us dead.”

Ultimately, it is the blend of Vincent’s humor and poignant themes that make her work stand out. Without the absurdity and humor, her films would be borderline nihilistic; without the themes, they would be funny but lacking in deeper meaning. Internal struggles, social isolation and the end of the world — all are on Victoria Vincent’s mind, and all are woven into her films for viewers to interpret and resonate with. And yet, she can still be as lost as the rest of us. As she told the Muse’s Milk blog: “When I make stuff, I don’t really feel like I know what I’m doing; I just try to do whatever feels right in that moment.”