Patricia Wallin Speaks Out about Abortion Laws in ...

Patricia Wallin Speaks Out about Abortion Laws in El Salvador

Aida Frey was excited to have her cousin, Patricia Wallin, back in Chicago for a few months. But   she was surprised when, instead of wanting to visit tourist destinations, Wallin asked Frey to join her in a National Women’s Day protest.

At the march, Frey was shocked to see Wallin ask the organizers if she could make a speech. Frey remembers her cousin grabbing the microphone and speaking to a crowd of people about abortion rights in the country of El Salvador, where Wallin and most of their family grew up.

Frey did not know much about this topic before hearing her cousin speak. After looking around and seeing the angry and shocked expressions of the crowd, she saw that her cousin had ignited them to want to learn more about this subject.

El Salvador is one of 24 countries that prohibits abortion altogether. 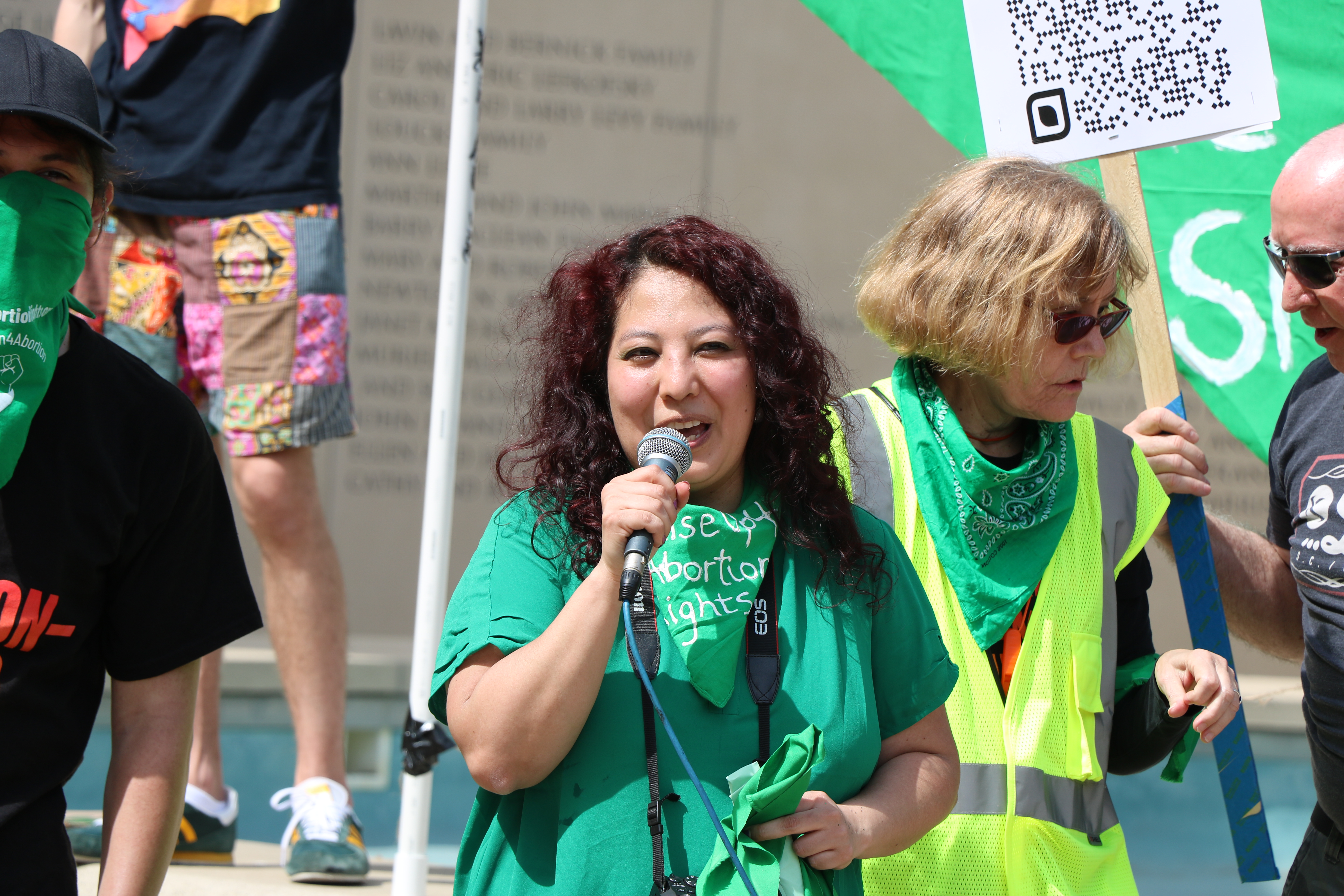 Patricia Wallin speaks at the Rise Up 4 Abortion Rights protest in Millennium Park on May 14. Photo by Cary Robbins, 14 East

“I was so proud of her,” Frey said. “She spoke out for something that needs to be heard. She had a good message. Not that many people know about what’s happening in El Salvador.”

Since Frey hadn’t heard much about El Salvador, she was excited to hear her cousin discuss the country’s issues with abortion rights. She was also a little confused because she had always remembered Wallin as being quiet.

“She is actually a very secluded person,” Frey said with a smile on her face, remembering her cousin talking to so many people at the protest. “I would say she’s an introvert … that was probably one of the first times I saw her being extroverted.”

What started out, in Frey’s perception, as an “innocent Christmas vacation,” to see her family soon turned into a path to advocacy.

Wallin has been organizing for two years now, but her passion started when she was 15 years old. Wallin grew up in El Salvador until the age of 11. At 15, she learned that one of her childhood friends from El Salvador had died by suicide after getting pregnant.

“I think about my friend all the time,” Wallin said. “She could have gone to Planned Parenthood early. She would still be alive. She was such a happy girl. She wasn’t depressed. She wasn’t anything, but it’s like this fear. It’s this fear that you’re gonna disappoint your parents. This fear that, ‘Oh, I’m gonna be labeled because I got pregnant at 15.’ And society is harsh on women.”

Wallin has done social work throughout her life and makes sure that women and girls know of their options when they get pregnant. She has supported two women through abortions and vividly remembers helping them through their emotional pain. One was faced with protesters as she walked into an abortion clinic.

Wallin has gone back and forth between living in Sweden and the United States since 2009. It was in that year when she saw something that changed her life.

Sitting in a train in Sweden, Wallin was taken aback when she saw an advertisement about El Salvador by Amnesty International, a nonprofit organization that advocates for human rights. Wallin does not usually see many people discussing her country. Shocked, she walked up to the advertisement and took a picture so that she could read it better later that day.

What Wallin saw was a picture of a mother of two children named Manuela. After losing her baby due to an obstetric emergency, Manuela was imprisoned in 2008 for aggravated homicide. Amnesty International was bringing attention to her case with flyers because she developed cancer in prison but received inadequate medical diagnosis and treatment, leading to her death  two years into her 30-year sentence at the age of 33.

This case received international attention because of how horrifically the prison system treated Manuela. Unfortunately, however, this is not the only case of a woman being imprisoned for allegedly having an abortion in the country.

On May 9, 2022, another woman in El Salvador was sentenced to 30 years in prison for aggravated homicide after allegedly having an abortion according to an article written by Al Jazeera. Activist groups say that she lost the baby due to “health conditions.”

“The more people are asking about it, the more helpful because I just think about the women right now in jail and we should be doing this big protest,” Wallin said, getting animated and frustrated thinking about all the people, some friends of hers, who are imprisoned.

The first time Wallin organized and spoke at a protest was on International Women’s Day on March 8, 2020. Before that year, she had no idea that there was a day designated to women at all. Wallin was working for PeaceWorks Sweden, a human rights organization, and they gave her the freedom to take on any project. Of all the human rights issues in the world, Wallin she knew she wanted to organize a march for abortion rights.

Wallin remembers the march vividly. A crowd of people showed up to Sweden’s Stockholm City Centre, ready to march for women’s rights to safe and legal abortion. She describes herself as a quiet person, so she waited for other people to say they wanted to give a speech. When no one did, she grabbed the microphone and told the crowd of people what had been raging inside of her since she first saw the picture of Manuela on the train.

“I remember feeling this warm, warm feeling, and I think it’s like the fire you know when people talk about, ‘I feel the rage in the fire.’ I felt it that day,” Wallin said. “Just having the microphone and looking at the people that wanted to listen and for me to be able to tell them because people don’t know where El Salvador is.”

After that, activism consumed her life. She met with other women who were from different countries in Central and Latin America, and they formed the Creartivista Kollektiva. The activist group uses art and activism to get their messages across through performative protests and art shows.

Wallins enjoys pairing activism with art because people are able to experience the message from a different point of view and interpret the art in their own way.

“It’s very impactful and emotional sometimes,” Wallin said. “And that’s the beauty of art: a symbol, or a painting or a poem can be more impactful than me just sitting there telling you the facts about how many people died.”

Wallin also started to work with Amnesty Latinamerika, Amnesty Sweden’s Latin American Group, to organize protests in Sweden, advocating for abortion rights in Latin and Central America. She and others who were part of her group won the Great Creativity Award in 2020 given by Amnesty International after spending a week doing art exhibitions, performances and more for International Safe Abortion Day: September 28, 2020.

During this time, Wallin also was in contact with Celina Escher, who created a documentary about a group of women imprisoned for allegedly having abortions. The documentary, called Fly So Far, focused on the story of a woman named Teodora Vásquez. She had a miscarriage but was taken to prison and charged with aggravated homicide immediately after losing her pregnancy.

Illegal abortions affect impoverished women the most because most wealthy women have the ability to go to private doctors and not fear their abortion cases being reported to the government. Laws in El Salvador state that doctors will face penalties for not reporting abortions to the government.

Wallin came to the U.S. to visit family for Christmas 2021 and to be with her sister while she was having her baby. The year before, her sister lost a baby a few minutes after being born because the baby’s lungs were not fully developed. Her sister was told during the pregnancy that the baby was not healthy and was given the option of choosing if she wanted to continue with the pregnancy.

“She had the option, and I was so glad for that because you have the right for an abortion if you want it,” Wallin said. “They gave her the choice, but she decided to just keep going with the pregnancy because she had never been pregnant before, so she’s like, ‘Well, I’ll just keep trying until whatever happens.’ That was her choice, and if the baby died 15 minutes after he was born … but something like that could happen in El Salvador, and they’re going to jail.”

In the past few months, many women in the U.S. have lost their right to an abortion. On the night of May 2, Wallin started to get phone calls from people. They told her that a draft Supreme Court decision about plans to overturn Roe v. Wade had been leaked. The official ruling in Dobbs v. Jackson Women’s Health Organization, issued June 24, reversed the 1973 decision that ended the federal protection for women to have a legal right to an abortion in the U.S.

Through her experience with seeing what has happened to people in El Salvador seeking abortions when it is illegal in the country, Wallin is scared to see what this will mean for people in the U.S.

“Even if it’s illegal, people won’t stop having them, so people are just gonna have to find a way,” Wallin said, “and it might not be a safe way because of lack of access to safe ways.”

Leo Pargo, who participated in the RiseUp4AbortionRights protests with Wallin on April 9, was able to hear Wallin speak out about El Salvador and how abortion rights are not just a problem in other countries. People have been fighting for their rights in this country, too.

“This being the shining city on the hill, this country, the top power in the world, what does it mean for the women of the world if the right to abortion is taken away in this country?” Pargo asked. “How would they be able to look to this place as a place where they could come to for freedom and democracy if women here don’t even have the right to abortion? I thought Patricia brought that up quite well.”

News about Lizelle Herrera, who lives in South Texas, exploded when she was arrested on April 7 because she allegedly performed a “self-inducing” abortion. She was released on $500,000 bail bond on April 9 and ultimately the charges were dropped. Texas Senate Bill 8, which became law in September, protects women from being charged with murder or homicide for having an abortion. However, as stated in an article by NPR, “it makes it nearly impossible to access abortion services in Texas, and many people are left with little to no legal options to terminate their pregnancy.”

People are now stating that this will be the first of many cases, but Wallin encourages people not to give up hope.

Looking back on her path as an activist, Wallin remembers being scared that when Argentina made abortion legal on demand in the first 14 weeks of gestation in 2020, the activists she knew from Argentina would stop protesting. She thought they would not continue to fight for El Salvador, but she was mistaken. The group has never stopped fighting with her.

Now, she says, it’s time for people in the U.S. to take to the streets and demand the U.S. Supreme Court and government officials listen.

“It’s like in El Salvador: it’s the law,” Wallin said. “It’s what it is, and people are in jail for it, but the activist groups have not stopped, not for a day, and there’s people fighting about it every day.”