The Chicago Minute: It's Spook.. 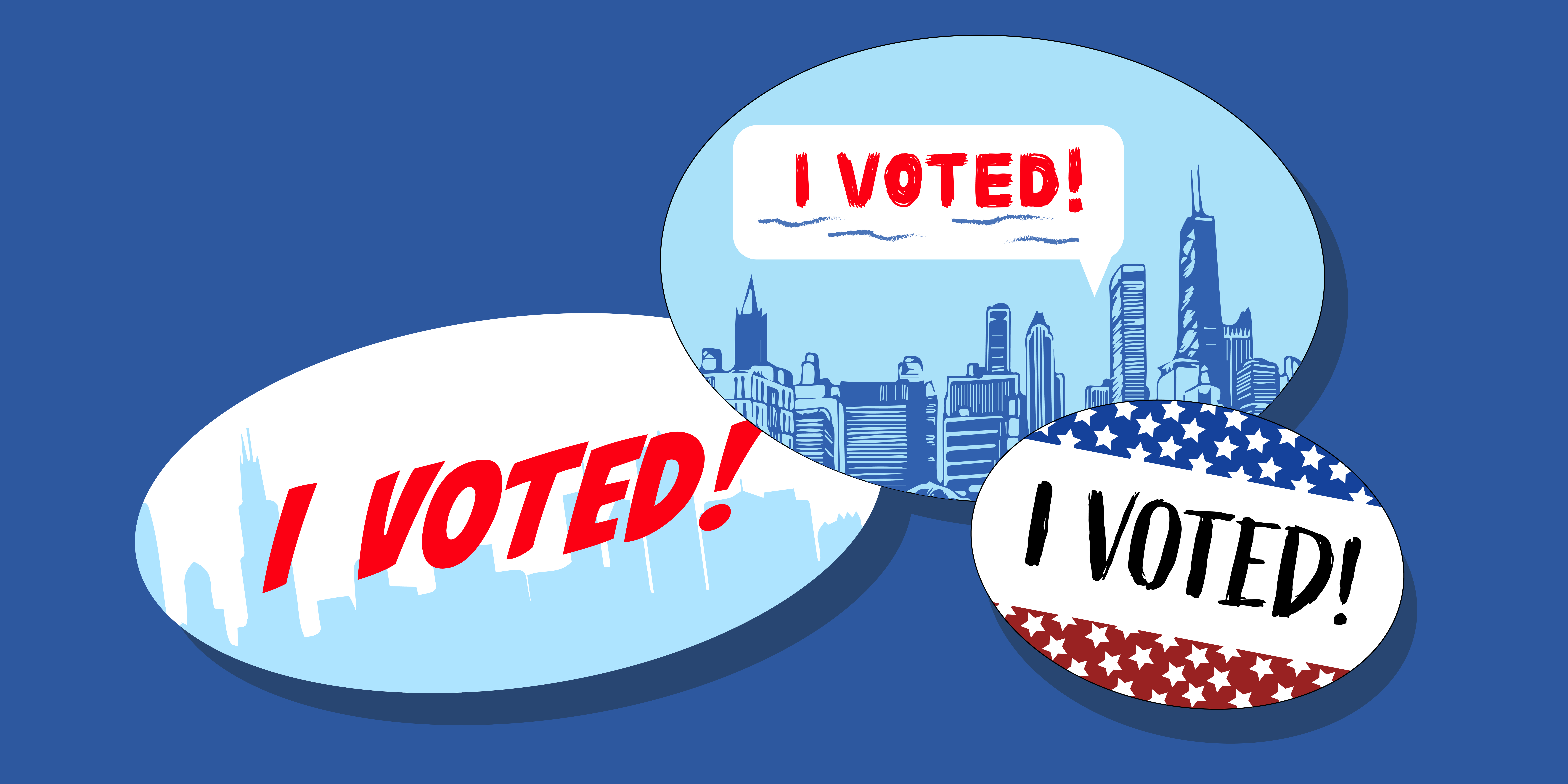 Many voters this election are happy to be getting stickers once again.

This year, everyone who votes in an election in Chicago will receive an “I voted!” sticker featuring seven different languages and an illustration of the Chicago skyline.

The city of Chicago brought back the election stickers during the pandemic, after previously giving out wristbands to voters instead. The “I voted!” stickers aren’t just available to people who vote in person, they were also sent out along with ballots to voters who requested to vote by mail.

Max Bever, director of public information at the Chicago Board of Elections, explained that as the number of people voting by mail increased during the pandemic, the Board of Elections found it would be easier to mail out stickers instead of wristbands.

Shawn Truong, a healthcare worker in Chicago, received her ballot by mail this year and voted by ballot drop box. She liked that all voters were given stickers. “I appreciated that they mailed it out,” she said. She thinks the city made the right decision getting rid of wristbands, since she thinks stickers are better for the occasion. “This isn’t a music festival,” said Truong. 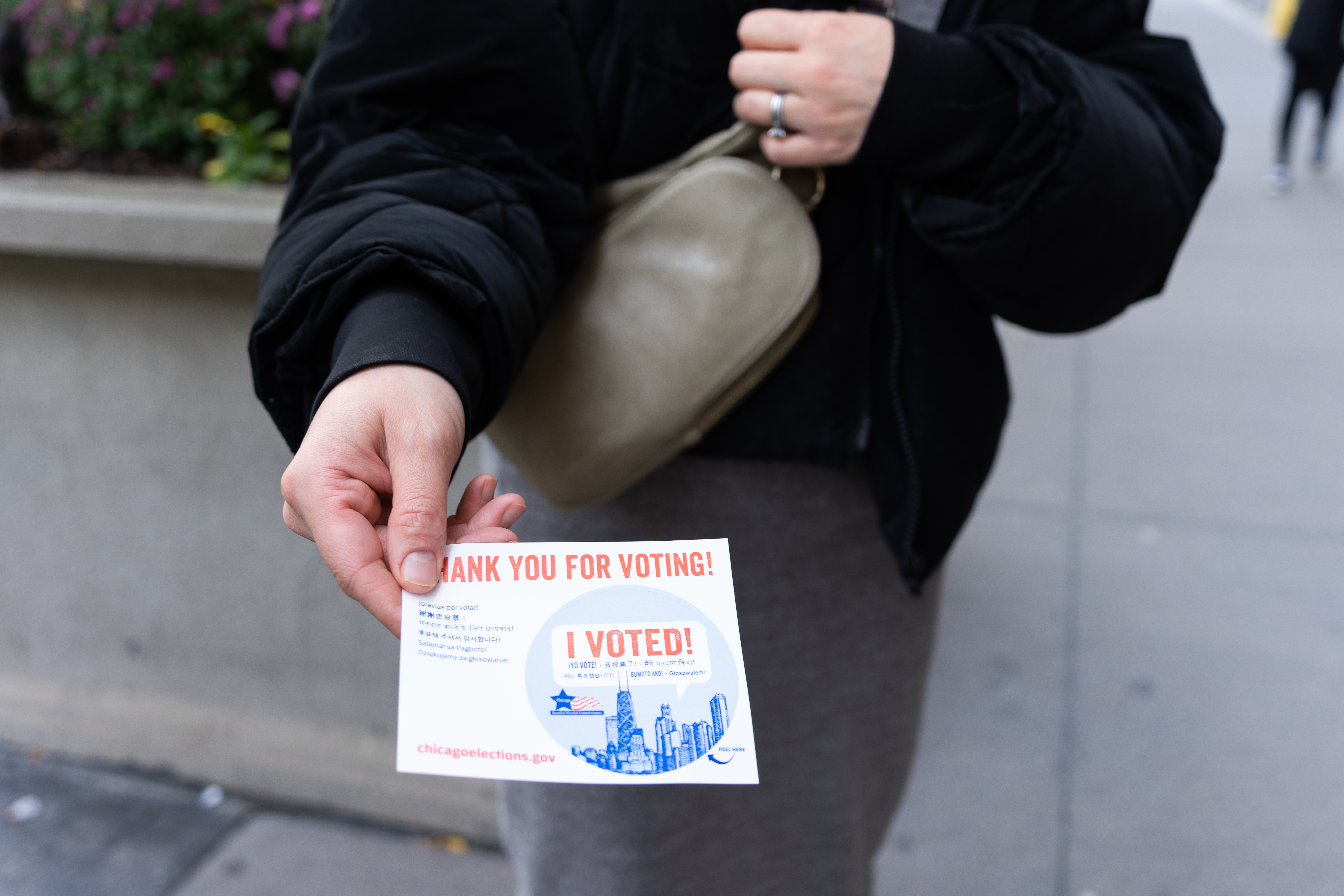 A Chicago woman displays the new “I voted!” sticker she received after voting in the midterm election. Emily Soto, 14 East

The Chicago Board of Elections also took into account voters’ feedback when deciding to switch to stickers.

“We’d also been hearing from voters for years, I think it’s a little easier to take a selfie with an ‘I voted’ sticker sometimes than it is with a wristband, and ‘I voted!’ stickers, beyond just the pride, showing people that you voted and reminding people that they can get out and vote,” said Bever.

Adam Toerner, an Old Town resident, was wearing an “I voted!” sticker after casting his ballot. He was happy to receive a sticker and hopes that by wearing it, he will encourage other people to vote. “We should be proud of having voted and engaging in our civic duties,” said Toerner. He also liked that the sticker this year included multiple languages.

The sticker features the words “I voted!” in English, Spanish, Chinese, Hindi, Polish, Korean and Tagalog. These are some of the most spoken languages in Chicago and ballots for the election are available in all of these languages. 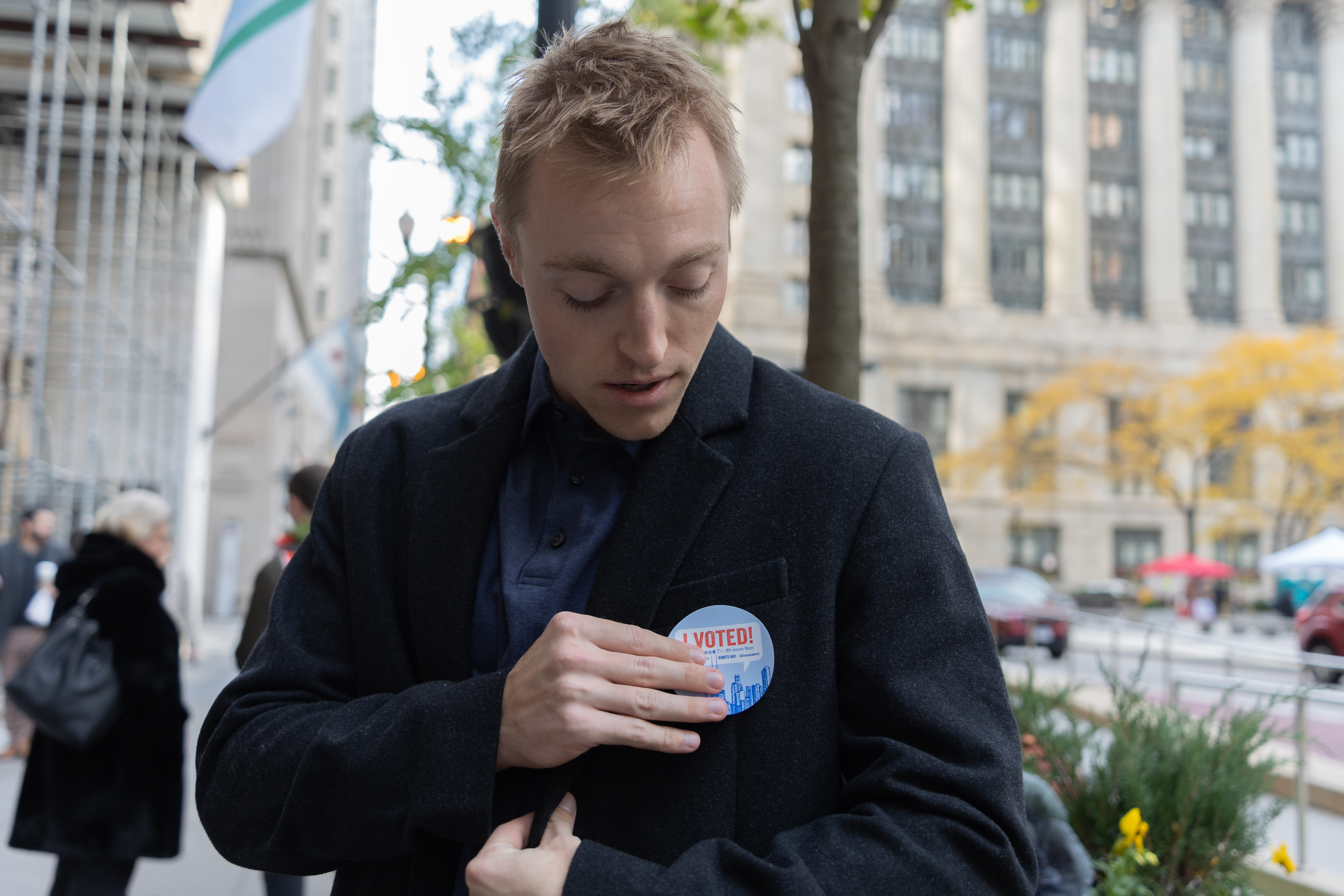 Adam Toerner applies an “I voted!” sticker to his chest after casting his ballot at the George Dunne Cook County Office Building in downtown Chicago. Emily Soto, 14 East

Jane Ignacio, a DePaul alumna (Class of ‘96), is a freelance graphic designer for the Chicago Board of Elections and the designer of Chicago’s “I voted!” stickers this year. Ignacio lives in Chicago and says that she gets inspiration from what she sees while driving and walking around the city. Some of her other ideas for the sticker came from thinking about Chicago voting.

“We tried our hardest to get close to Chicago flag colors when we put this together. As far as the bubble, we just wanted people to know that it’s people in Chicago voting, so ‘I voted!’ in a bubble just made sense,” said Ignacio.

Ignacio said that although the previous wristbands worked well, stickers have more of an impact.

“I just feel like sometimes the stickers stand out a little bit more. It’s not just on your wrist, so people can actually see it once when you’re in front of them, if they’re wearing it on their shirt. What’s interesting about the stickers is I’ve seen them on people’s computers, on laptops, on books,” she said. “So it’s actually kind of cool that it’s not just something you wear for one day and then rip it off your wrist and toss it.”

With the election finally here, Ignacio is happy to see the final product of her work.

“You know, you have your signs that tell people where to vote and you have your forms that people fill out and there’s so much that goes into that one day, and when you see that people are walking around saying that they voted, it just is such a good feeling knowing that, okay, that day is here and people are responding… I always say it’s like my Super Bowl,” said Ignacio.

For many voters like Toerner, the election can also be exciting. He was happy to be voting on a Thursday afternoon in October. “No better way to spend your lunch break than voting,” Toerner said.

Chicago’s “I voted!” stickers will be available to all voters for the 2022 and 2023 elections. The Chicago Board of Elections plans to continue to give out election stickers for future elections, but says that they may switch up the design for 2024.