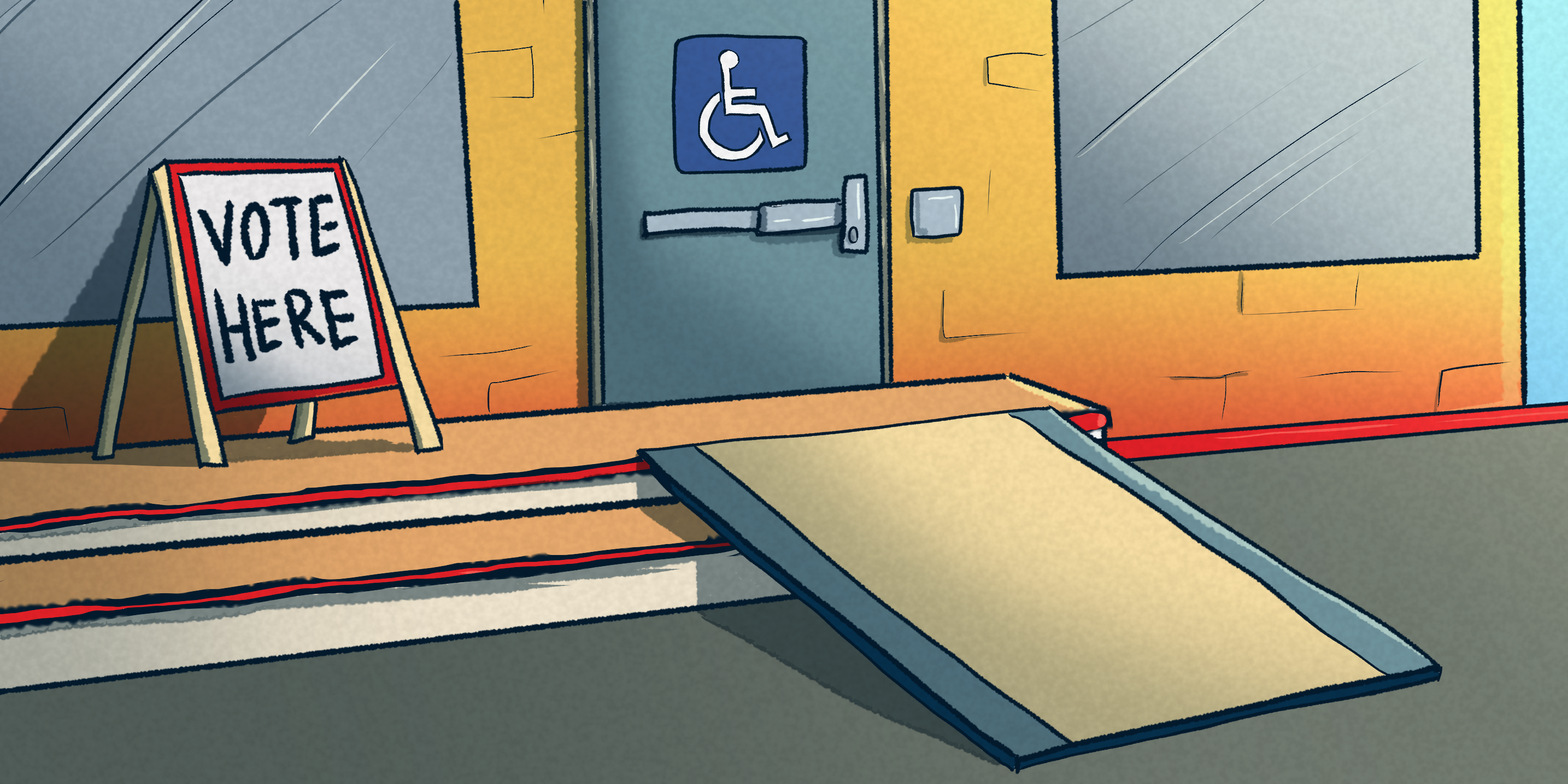 Voting is a right for everyone, but not every voter is provided accessible options for the polling booths. Chicago is working towards a more accessible future for voters.

The ability and right to vote is a core principle of American democracy.

However, it hasn’t always been this simple. American democracy has a history of voting restrictions on marginalized individuals. The right to vote may be available, but that doesn’t guarantee accessibility.

The Issue of Accessibility

According to the CDC,  61 million adults live with some type of disability. This means that 26% of the eligible voters in this country experience some sort of disability that limits them in some capacity. Despite this large number, people with disabilities still have to tackle accessibility issues in almost every facet of everyday life. The CDC lists seven major barriers. This includes political barriers that relate to the lack of awareness or enforcement of existing laws. It can also include transportation barriers from public transport, or physical barriers like curbs and stairs.

Many of the barriers that prevent people with disabilities from participating in society can be changed through legislation, which is what Equip for Equality, a private nonprofit, works for. Barry Taylor, a program vice president for the civil rights team, explained this.

“We’re what’s called the protection advocacy agency for the state of Illinois, which means that we’re designated by the governor to provide free legal advocacy services to people with disabilities, on issues that are related to their disability,” Taylor said.

Equip for Equality has helped Chicago with accessibility in many forms. They aided the process of putting visual and audio aids on the CTA. They operate with funding from different federal funds, one of which is under the Help America Vote Act of 2002. This enacted many reforms to help the voting process. The U.S. Election Assistance Commission states that it “addresses improvements to voting systems and voter access that were identified following the 2000 election.”

“People should be able to vote privately and independently,” Taylor said, explaining that it is the core principle behind accessible elections. “So what we often see with seniors as well as people with disabilities, is because of the way systems are and barriers that exist, that they sometimes have to rely on other people for voting.”

There have been major strides to ensure the values of independence and privacy are given to every voter and progress has been made for accessible voting. The city of Chicago has taken many of these steps, as voting wasn’t always as accessible as we see today.

“Back in 2016, the Department of Justice actually went and did some surveys of polling places in Chicago, and they found a lot of physical barriers,” said Taylor.

Chicago wasn’t the only city where they found issues. There were voting booths across the country with accessibility problems, including stairs, curbs, lack of ramps, and lack or unwillingness in providing voting machines. In a Pew Research article, Michelle Bishop, a voting rights activist for the National Disability Rights networks, talked about what this lack of inaccessibility communicates.

“The message is: You’re not wanted here,” Bishop said.

She said that poll workers sometimes refuse to use accessible machines due to lack of training. When addressed with these issues, the Chicago Board of Elections did not try to ignore them.

“Then the Board of Elections reached out to an Equip for Equality and has hired us to work collaboratively with them, and the Department of Justice, to work out a plan to make all polling places in Chicago accessible, and to address this issue,” Taylor noted.

This plan to expand accessibility in Chicago goes beyond just physical barriers. The director of public information for the Chicago Board of Elections, Max Bever, explained the expansion strides towards progress.

“There’s accessibility in three main ways of voting in the city of Chicago, and the state of Illinois,” Bever said. He explained that there are vote by mail, early voting and in person accommodations at local precincts.

“It was just over 25% in this last election, [who] voted by mail, and it was 24% for early voting,” said Bever. However, this wasn’t the only time that these options were popular.

The success of mail-in ballots and early voting in Illinois is not just a reflection of the pandemic. It means that people with disabilities often do not have to find aid or transport to polling places. The ability to participate in mail-in voting benefits many, not just people with disabilities. However, recent controversies surrounding mail-in voting have disproportionately affected other states.

“There’s been a really positive trend in Illinois, to allow people to vote in alternate ways, whether it’s early voting or vote by mail,” Taylor said. “I think there’s other states that have been making voting harder, but in Illinois voting has actually been expanded for folks, including people with disabilities.”

Bever feels similarly to Taylor, and notes that the board has felt privileged to operate in a state that encourages alternative voting.

“I think the perspective of the board is that we find ourselves quite lucky in the state of Illinois that we do have elected officials that are moving to increasing access to the ballot, rather than the direction of a lot of other states, including some of our neighboring states, in Indiana, and in Wisconsin,” Bever said.

Illinois’ advancements are notable compared to other states. The recent stigma and legislation in neighboring states have had detrimental consequences to the voting rights of citizens. According to the Brennan Center for Justice, lawmakers have passed at least 21 restrictive voting laws since the start of 2021 in states like Missouri, Kentucky, Indiana and Iowa.

Political Representation and the Importance of Every Vote

The ability to vote is an important pillar in democracy, but so is representation and participation. However, this is difficult without access to voting booths, which stems from stigmas about participating in the political arena that people with disabilities face.

John Fetterman, who is running for Pennsylvania’s Senate race, is a prime example of this. He used closed captioning devices on the campaign trail during a debate in October after recently suffering a stroke which has had lingering effects on his ability to process speech. In a Fox News article, he was called “a struggling stroke victim,” and his stuttering “reinforced deep doubts about his ability to serve.”

This narrative is just one of many examples surrounding the ridicule or doubt of those with disabilities who receive aid.

“It’s sort of a chilling effect on whether they go forward in either the political arena or disclose their disability in any type of workplace setting,” Taylor said regarding the critiques towards Fetterman.

Whether this be due to harmful rhetoric or lack of accessibility, the political participation of people with disabilities is low. The Disability Rights of California reported that “In 2016, more than 35 million Americans with disabilities were eligible to vote, but only 15 million exercised their right.”

There are several ways to encourage political participation, including increased accessibility and awareness as well as a push for more political representation, which Taylor says is needed.

“I think, you know, that representation is really important,” Taylor said. “I think, in some ways, it’s been distressing the way things have been going, but it’s also been an avenue for discussion about the importance of providing accommodations for people with disabilities in all aspects of life, including in the political arena, and hopefully, broadening the representation as well.”

Chicago is making progress to become more accessible for an inclusive future, but Equip for Equality believes there is still a long way to go for people with disabilities to be able to operate privately and independently.

“One of the things we like to talk about is called universal design. And that is making something accessible from the front end, and that can benefit all of us,” Taylor said. He discussed the process of constructing accessible and inclusive structures in the city.

“We’re in that sort of transition period where a lot of construction is being done, you know, entrances are being fixed, so the more accessible and sidewalks are being fixed. I think things are moving in a really positive direction,” Taylor said. Similar to mail-in and early voting, he believes that accessible structures and progress are a benefit to all, because we all may need it someday.

“So even if I don’t need an accessible entrance right now, yeah, maybe in 10 years, I will. Or maybe I’ll have a child that needs one,” Taylor said. “Disability is not something you’re just born with, but also something you can acquire.”

The midterm elections will be an important determining factor of how the political arena will operate for the next couple of years. The political power of people with disabilities is 61 million people strong. However, voting, and aiding with accessible voting, can be overwhelming. Bever encourages everyone to seek help from the Chicago Board of Elections.

“We just urge people to reach out to us. You know, if they’ve got questions, we can talk them through it, we can talk to them about the process. If people are interested in the voting machines, or have questions about how it works, or want to counter a relative that they read something wrong on Facebook, they can come, they can stop by, get a demonstration,” Bever said.

The Chicago Board of Elections can be reached through their website or at 312-269-7900 for questions and concerns about voting early, through mail or accessible options at polling stations.

You can find your local Illinois polling place here.