DIY Safe Spaces: The Phenomenon of the Pop-Up Gall...

The Art and Peril of Guantanam..

DIY Safe Spaces: The Phenomenon of the Pop-Up Gallery 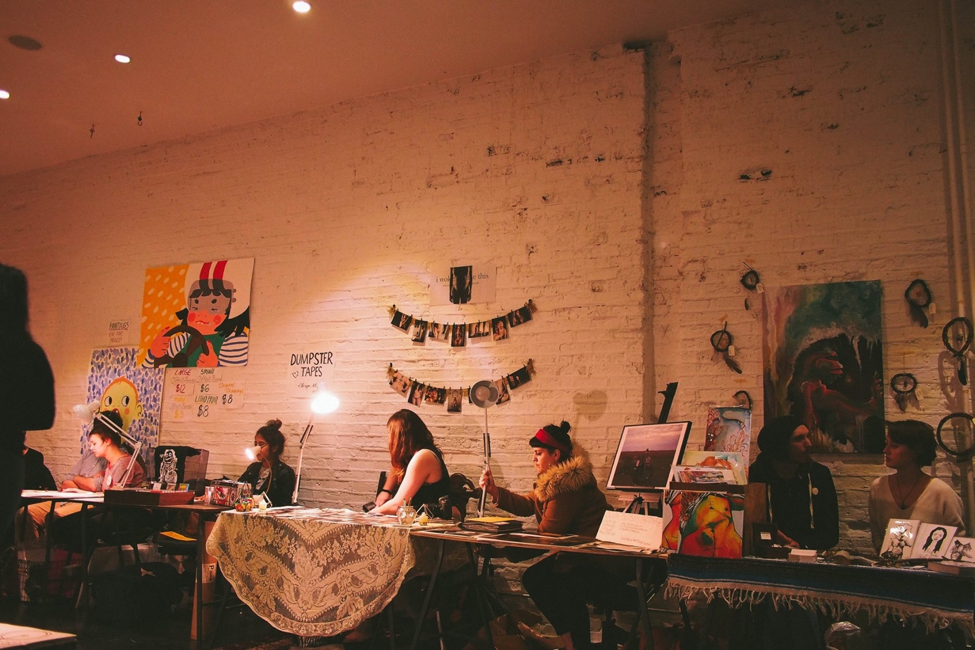 NO RACIST, SEXIST, HOMOPHOBIC, AGEIST, ABLEIST OR OTHERWISE DEROGATORY AND OFFENSIVE CONTENT ALLOWED. These are the safe space guidelines that must be upheld by every single artist given the mic. This call and response war cry echoes off the walls of the makeshift venue before anyone can step foot on stage. The audience sits in rusty gray fold out chairs and the slightest shift of weight can be heard in a chorus of creaks. The sign-up sheet is a lined piece of paper evidently ripped out from a college-ruled notebook and remains the only semblance of organization for an entire night spent in the corridors of a third-floor loft space on the outskirts of Wicker Park.

This is one of the many informal spaces in which artists, performers and activists come together to share their work and inspire change. Pop-up galleries and performance spaces have started lining the streets of Chicago; from the Loop to the South Side, art has taken up both temporary and permanent residence in hidden spots littered around the city.

Former owner of a pop-up space called “FLATspace,” Olivia McManus’s love affair with transient gallery spaces has followed her from the School of the Art Institute of Chicago to her current position at Rhona Hoffman Gallery.

“Chicago has a rich history of the ‘apartment’ gallery, [which] are often more DIY spaces that allow artists or curators to experiment with projects or curatorial concepts,” McManus said.

The origin of “FLATspace” was the discovery of an empty multi-level apartment off the beaten path in the Pilsen area owned by a friend of McManus who moved here from London. They made the empty space a haven for diverse mediums and artists.

“Art is a mode of communication and rarely is it quiet. Obviously some works are overtly more political or socially minded, but at the end of the day people make work about something,” McManus said.

Yuri Stone, an artist, curator and arts administrator at The Renaissance Society at the University of Chicago, has also noticed the recent transition of galleries to informal spaces. Neighborhoods such as Wicker Park, Bucktown, Ukrainian Village, Rogers Park, Pilsen, Bridgeport, Hyde Park, West Loop, West Garfield Park are just some of the ones constantly housing pop-up galleries.

“Those are just the ones on my radar. Part of what is great about it is that they’ll just pop up for a weekend and then maybe have another show six months later and then never do another show again,” Stone said.

The unpredictability of these pop-up galleries inspires both allure and confusion. The hardest part about attending them is finding where exactly where they will be located. Often they are mobile, temporary and even hidden so the general public must follow their whereabouts closely in order to attend.

“They come and go and it keeps things interesting. I’ve even been to a pop up gallery in the back of a U-Haul parked in front of someone’s apartment,” Stone said.

The very concept of a space for art is challenged by many of these pop-up galleries. Many are held off the beaten path and prove that even with art’s high stature in society, it does not need a formal space to be displayed. A favorite pop-up gallery of Stone’s is not a gallery at all, but a Trunk Show where spectators are welcome to gather around a 1999 forest green Ford Taurus and observe. The artist’s work is sold out of the trunk for $5. 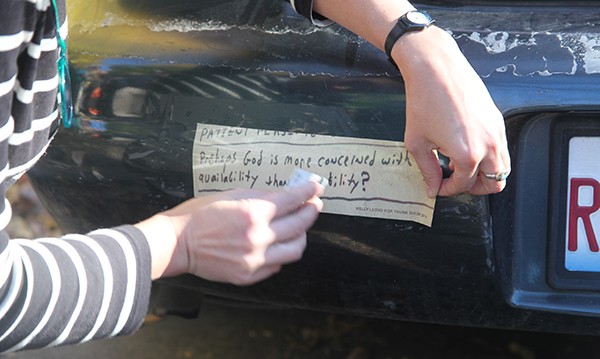 “They invite an artist every month (or maybe every few weeks, its very loose) to make a bumper sticker for their car. They even have an opening reception, usually in a parking lot somewhere,” Stone said.

The exhibits of these pop-up spaces vary, but in all of them there is an emphasis on diversity and social awareness. Creating a place for artists to express themselves within safe space guidelines is a central component of the DIY philosophy.

As managing editor of Hooligan Magazine, Rivka Yeker organized the publication’s Two Year Art Collective, a pop-up gallery and performance space that showed up at The Study Chicago for just one night.

Outside of Hooligan’s dedication to art, they have a no-tolerance policy for any discriminatory behavior within their staff, their content or their pop-up gallery. The safe space mentality is at the core of many of these pop-up galleries, put in place to make sure that everyone who crosses their threshold, regardless of sexual identity or race, feels accepted, respected and welcome.

“When you remind people that this is a place for self expression, a place that should be clear of negative judgment, then people will embrace the safe space,” Yeker said. “People need to know that there is no room for bigotry or hatred in the kind of art community that we are working on creating.”

The celebration of the art-based literary magazine included a collaboration of spoken word, visual artists and performers, all unified in an informal space.

“We are putting as many different kinds of artists in one big room, and essentially giving every single person the ability to yell their opinions and beliefs through a booth, or into a mic,” Yeker said.

The event invited local artists, as well as those coming in from out of state, to put their work on display, wear whatever they wanted and let the world know what they struggle with, politically or otherwise. Admission was a $5 suggested donation.

Alex Lukawski was one of the artists featured at Hooligan, but also within other DIY venues such as the Dojo and the Dollhouse. Lukawski was originally featured in these spaces as a bassist of an all-girl punk band called Glamour Hotline, and just recently her works of watercolor, acrylic and oil paint have shown up in their hallways.

“The art that hangs on their walls are made by POC, non-cis, and/or female artists and this helps create a welcoming environment,” Lukawski said.

Outside of her involvement in these pop-up spaces, art is simply a source of happiness for Lukawski and many young artists like her. The informal gallery spaces have social justice ideology behind their policies, because many of the works and performances featured in these spaces deal with sensitive content like sexual abuse and suicide attempts. This is when the safe space guidelines become necessity. 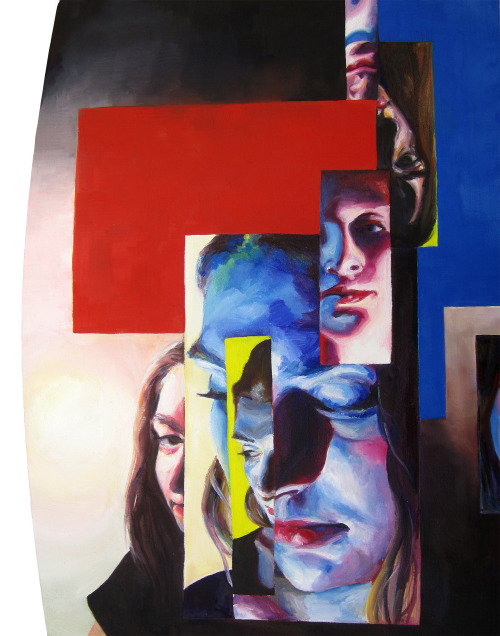 The DIY mentality respects survivors and marginalized identities fiercely. The gallery’s house art shows, spoken word nights and movie viewings that reinforce the healing nature of art in all its forms.

Art is inherently personal and these transient spaces allow for experimentation and openness as an artist and an observer. They promote positivity through empathy. Even just the action of creating allows for healing, and in Lukawski’s work inspiration is drawn from documenting the people she admires.

“Making brush strokes and outlining watercolor drawings is very calming to me,” said Lukawski. “I’m not always the best at communicating my thoughts or feelings in words so I turn to art in these situations.”