Chicago’s Own Help the Homeles.. 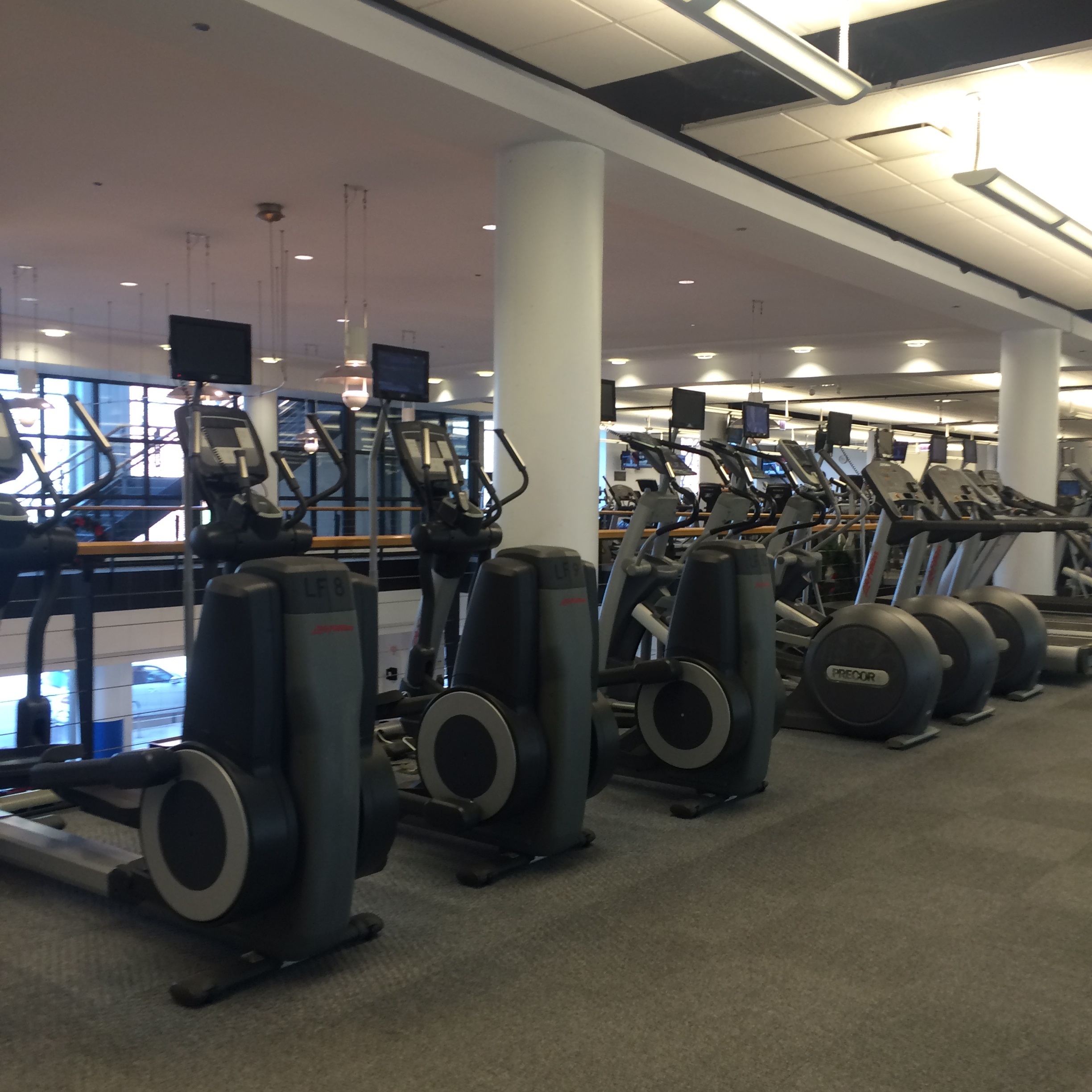 Is kinetic energy a profitable source of renewable energy for gyms?

Come into the Ray Meyer Fitness and Recreational Center around 5:30 p.m. on a school night and chances are, you may spend half of your workout waiting for an open machine. It’s the busiest time of the day for the gym; the facility is crowded with students and professionals looking for a post-work sweat. Even from the outside the gym appears hectic, with members sliding through the revolving glass doors like clockwork. Inside, conversations clash with the roar of machinery and pulse of basslines from workout pump-up songs.

Turn your gaze upward, though, and patrons are surrounded by a 360-degree view of cardio machines. A winding staircase leads to an exposed skywalk, connecting the first and second floor. On the floors above patrons run on treadmills, glide up ellipticals and climb steps on stairmasters. Machines chug, patrons sweat and energy flows.

Yet where does that usable energy go? With the right technology, gym rats could turn into lab rats in an effort to find new sources of renewable energy.

The Ray is home to 135 varying cardio machines, and on a normal weekday receives foot traffic of over 1,000 visitors. The cardio equipment is spread throughout the second and fourth floors, along with cycle studios. Cardio, short for cardiovascular fitness, is a workout that engages the entire circulatory system, pumping oxygenated blood to working muscles, tissues and organs.

Patrons may go to the gym to burn calories or build muscle, but they are also exerting energy. This energy is known as kinetic energy, or energy a body possesses through motion.

Cardio machines such as stationary bikes, treadmills and ellipticals harness this energy by generating resistance while in use. This resistance fuels a patron’s workout, creating kinetic energy with the gym equipment. The friction from the resistance creates heat, which is usually lost into the surrounding atmosphere. This heat, though, can be converted to energy if harnessed.

Founded in 2008, ReRev is one company that helps convert gym kinetic energy into potential energy. President Hudson Harr said the idea came from his own time spent working out at the gym. An engineering and finance major at University of Florida in 2006, Harr was describing his day’s workout to his mother over dinner.

“She told me it seemed so silly to expend physical effort in a process where nothing is created nor destroyed,” Harr said.

Harr said the idea stuck, and the next time he frequented the gym he would hunt for machines that could harness kinetic energy into something productive. Focusing on ellipticals, Harr began playing with the machinery, combining knowledge from his studies with innovation.

Working with existing gym machinery, the ReRev system takes kinetic energy from machine usage and converts the energy to direct current (DC), or a one-way electrical current. This current is converted by ReRev into alternating currents (AC), multi-directional electrical currents. AC currents are used by most residencies and businesses

This converted energy is then sent back to the building’s electrical panel, and can be used to help power the building.

With the ReRev converter, a 30-minute workout can create 50 watt hours. A watt hour (Wh) is a unit of energy measuring the amount of work performed. Appliances and electronic devices, such as gym equipment, perform work, and are measured with (kWh), or 1,000Wh.

In comparison, a modern refrigerator uses around 350kWh a year.

Keep running, though, because these 50Wh workouts are not for nothing. A 30-minute workout of 50Wh can produce enough electricity to power a CLR light bulb for over two hours, fully charge an iPhone six times or power a laptop for an hour.

Another Chicago-affiliated university has tested the technology. In 2013, University of Illinois Chicago (UIC) installed a ReRev converter to the campus student recreation facility. The converter connected ten elliptical machines to the facility’s electrical grid. ReRev’s installation at UIC was part of a student project to include more energy-saving technology on campus.

According to data compiled by Campus Recreation at DePaul University, the Ray Meyer Fitness and Recreational Center recorded 590,819 facility usages, or check-ins, in a year spanning from July 1, 2015 through June 30, 2016. If each of these gym patrons used an elliptical machine wired to a ReRev converter, they would produce 29,540,950Wh of energy, or 30,000kWh. This would be enough energy to power 260 CFL light bulbs for a day, charge 62 laptops for a day, or power 84 refrigerators for a year.

DePaul has yet to include energy-converting equipment into the university’s recreational facilities. Rees Grant, assistant director of facilities at the Ray, says the process may be more complex than simply buying a converter.

“It’s definitely an interesting idea,” said Grant. “It’s not something that’s really utilized here, but there are definitely a lot of factors that come into play.”

According to Grant, compatibility could be difficult because machines vary by year, model and usage. He even cites location in the gym as a factor in a machine’s life span (for example, a stationary bike located in front of a television may be used more than a bike on the fourth floor of the gym). A typical cardio machine can last between five to ten years, Grant says, and older models may not be modern enough to support the renovated technology.

“I don’t know how beneficial it would be from a compatibility standpoint,” said Grant.

UIC’s Campus Recreation Associate Director of Facilities Jeff Lloyd admits the technology does have its difficulties, like keeping contact with ReRev itself, but overall the system works well.

“The system is still working and it’s definitely putting power back into the grid,” said Lloyd.

“It would just be something else to be proud of rather than just congratulating myself for getting to the gym,” said Sydnie Radtke, a Ray attendee and junior at DePaul. “Having that sort of initiative could give me another reason to want to work out harder.”

“The equipment is so accessible to [students],” said Ackerman. “People would be working out for personal health and environmental health.”

The technology doesn’t come without a price tag, though. Harr says the company usually only installs ReRev in large facilities, meaning the system could cost as least $15,000. Given the small amount of electricity the conversion produces, it may take years for gyms and businesses to profit or break even with the investment.

For some schools and businesses, the benefits outweigh the wait. According to ReRev’s website, 39 universities and businesses have already implemented the energy-saving technology. Those locations range from Butler University and Texas State to the U.S. Air Force and Sony Pictures.

Many patrons of the Ray Meyer Fitness Center agree that energy-converting technology could be beneficial to the gym.

“The Ray always seems to be busy,” said Radtke. “If most of the machines could convert energy that way, I think the price would be matched really quickly. The electricity bill would definitely decrease.”

Ackerman adds it would be an opportunity for the university to shift budgeting priorities, even if only minimally.

“It has to be so expensive to pay for electricity on a college campus,” said Ackerman. “It would be a good resource to have students and community members work to help produce electricity besides have it come out of funding.”

ReRev isn’t the only company to harness kinetic energy as a potential source of electricity. GYRE9 in Connecticut is patenting The Green Revolution, retrofitting cycling equipment. SportsArt Fitness in Washington has created a line of gym equipment that plugs into the wall to easily transfer energy currents. The Vancouver-based company Bionic Power has even patented the PowerWalk, a gearbox that converts the knee’s rotational speed from mechanical power to electrical power. The company is beginning product trials with the U.S. Army and U.S. Marine Corps in 2017.

With kinetic energy, every step counts. Pavegen, located in London, converts energy from walking by installing energy-converting floor tiles. The tiles convert energy based on a “hybrid” system of harvesting technology and piezoelectricity, or systems of converting mechanical strain into usable energy. During the 2012 Olympic Games in London, Pavegen installed their energy converting tiles to a YouTube information booth. The company recorded over 1 million steps throughout the games, collecting roughly 1.2kWh. The tiles have since been installed in site ranging from businesses in Brazil to public schools in Indiana.

The market for kinetic energy converting equipment is still expanding and technology is still a work in progress. In times of increasing climate change and energy consumption, the idea of new sources of renewable energy can sound more enticing than plausible.

“In theory, it seems like it would assist with energy usage,” said Grant.

Harr says it is the concept, not immediate result, that provides hope for future progress.

“I think its mission has been fulfilled by showing people what’s possible with innovation and conservation,” said Harr. “I would argue that is has raised awareness for other forms of human energy like bicycles in remote regions or walkways that power lights.”

At the Ray, machines continue to roar. Outside the wall-to-wall glass windows on the second floor, Sheffield turns dark. To the right of the staircase a man in biking shorts pedals on a stationary bike while watching SportsCenter. Two girls chat idly as they walk on treadmills, their yoga-pant clad legs moving simultaneously. Another girl glides on an inclined elliptical, her ponytail swaying with each stride. Overhead, rows of fluorescent lights illuminate.

“It would be cool to be able to say ‘I’m tired, but if I push it’s going to help light this room,’” said Ackerman. “It’s altruistic.”