They Took to the Streets: Wome..

They Took to the Streets: Trump Tower

How Rape Kits in Illinois Fall..

They Took to the Streets: Trump Tower 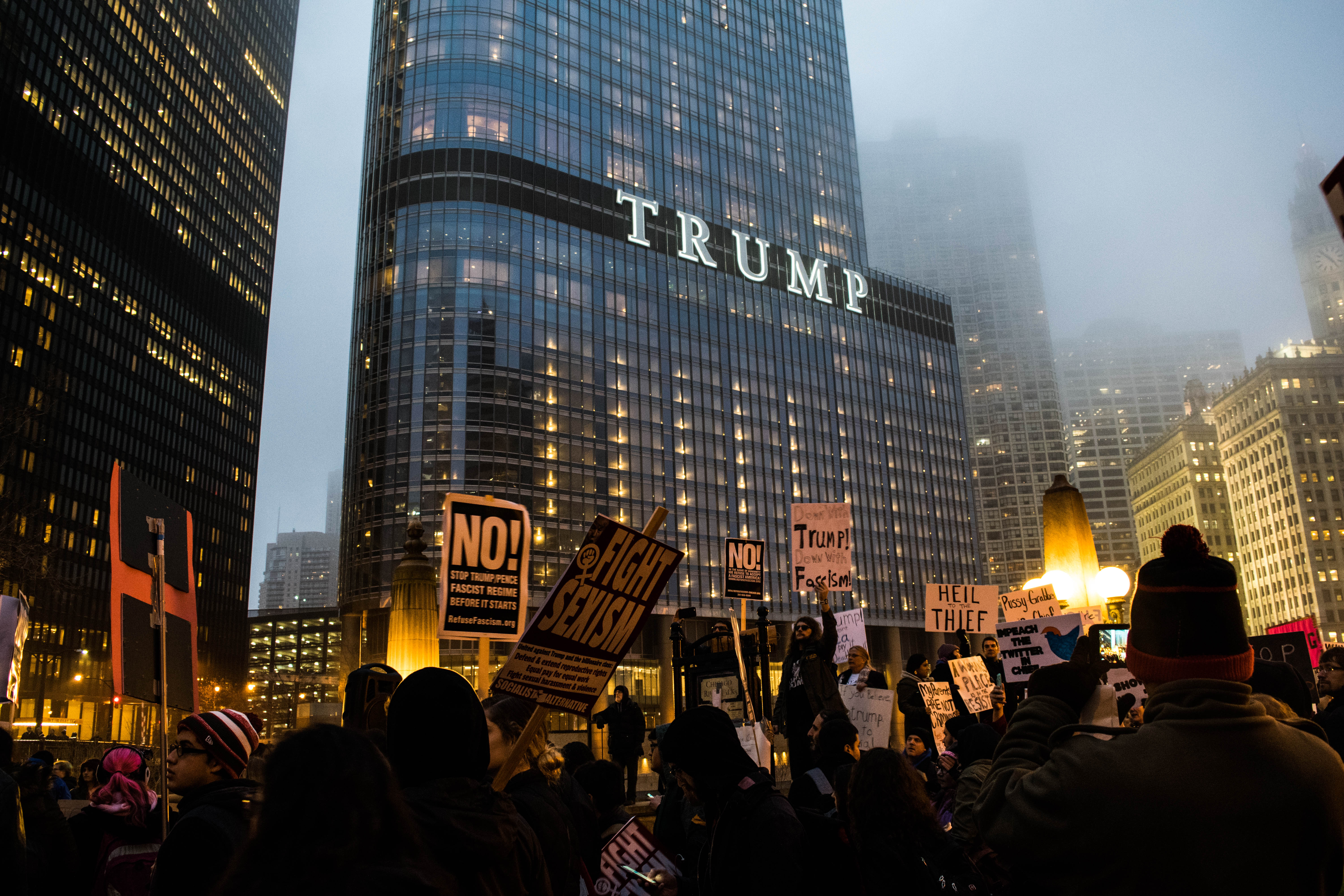 “You know, my country’s true colors have been revealed,” activist William Jones said, walking under the orange street light down the middle of Wacker Drive in a neon green vest. “Some sort of inaction, some sort of being upset about it won’t do the work.”

“Actually,” he said, “right now, I’m here to keep people safe.” Then, he disappeared into the crowd.

Donald J. Trump was sworn in as President of the United States on the overcast morning of Friday, Jan. 20. In the aftermath of the most chaotic, nasty election in recent memory, countless Americans have taken to the streets in opposition to a candidate considered by many to be uniquely unfit for office. In Chicago, protesters from across the city gathered in Grant Park, Daley Plaza, in front of Trump Tower and beyond to make their dissent heard.

On the night of the presidential inauguration, 14 East reporters visited the protest in front of Trump Tower, where a crowd marched back and forth across a section of Wacker cordoned off by police.

Protesters gather on Wacker Drive across the river from Trump Tower. For full image, click the Theta icon.

What follows is the testimony of individuals — anti-Trump, pro-Trump and everything in-between — at Trump Tower on the night of the inauguration. 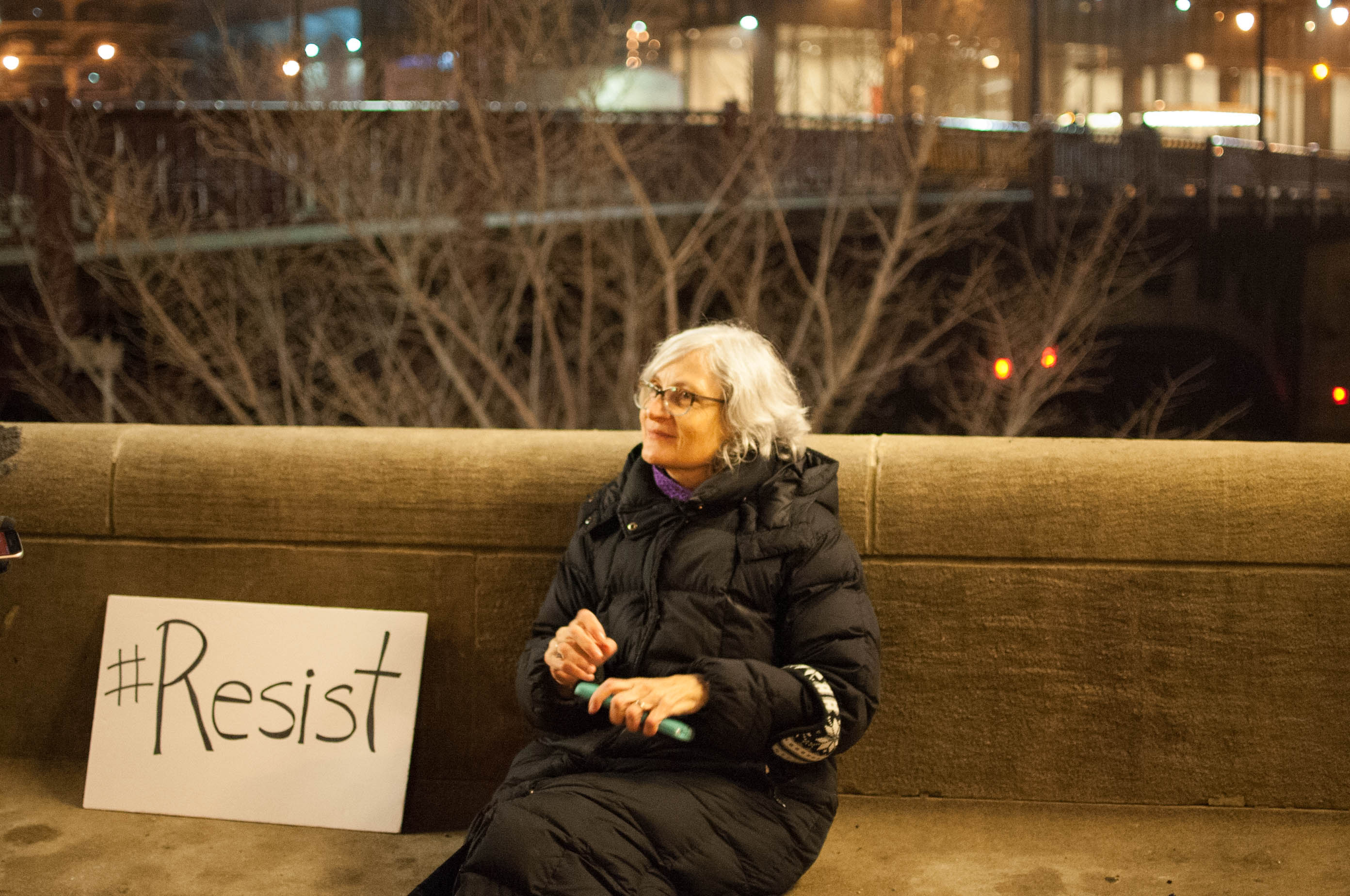 Betsy Rubin: “I am completely horrified that the United States elected Donald Trump as president. I never thought I would see anything like this in my lifetime. I never dreamed it possible. I think a lot of the ugliness that was exposed by Trump was there all along — for example, the racism — but I think he has lit that on fire.” 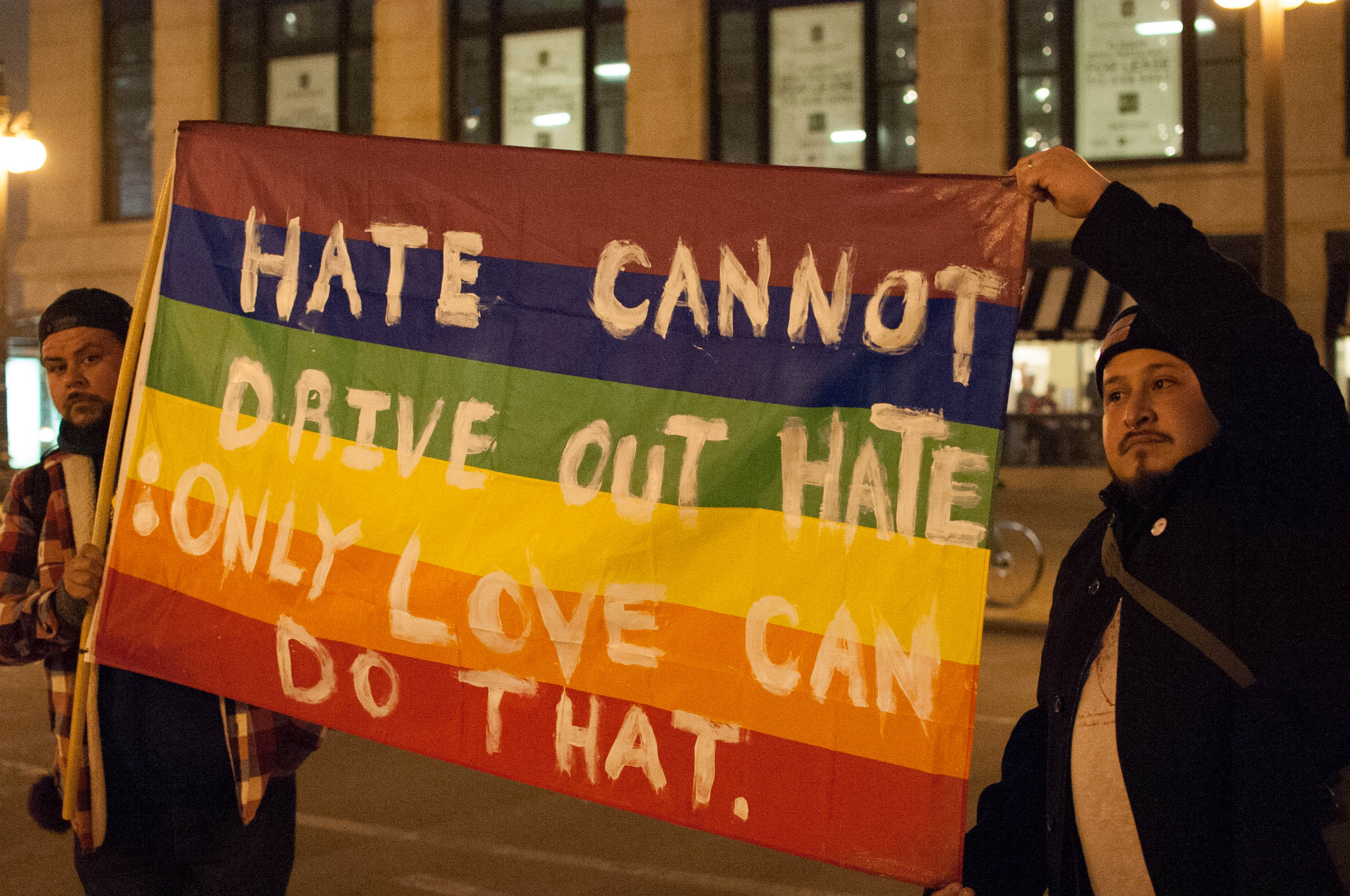 Fernando B: “If you don’t stand up and say something, make our voices heard — which is what our country was founded on — if you read my f***ing flag, you know what that stands for.” 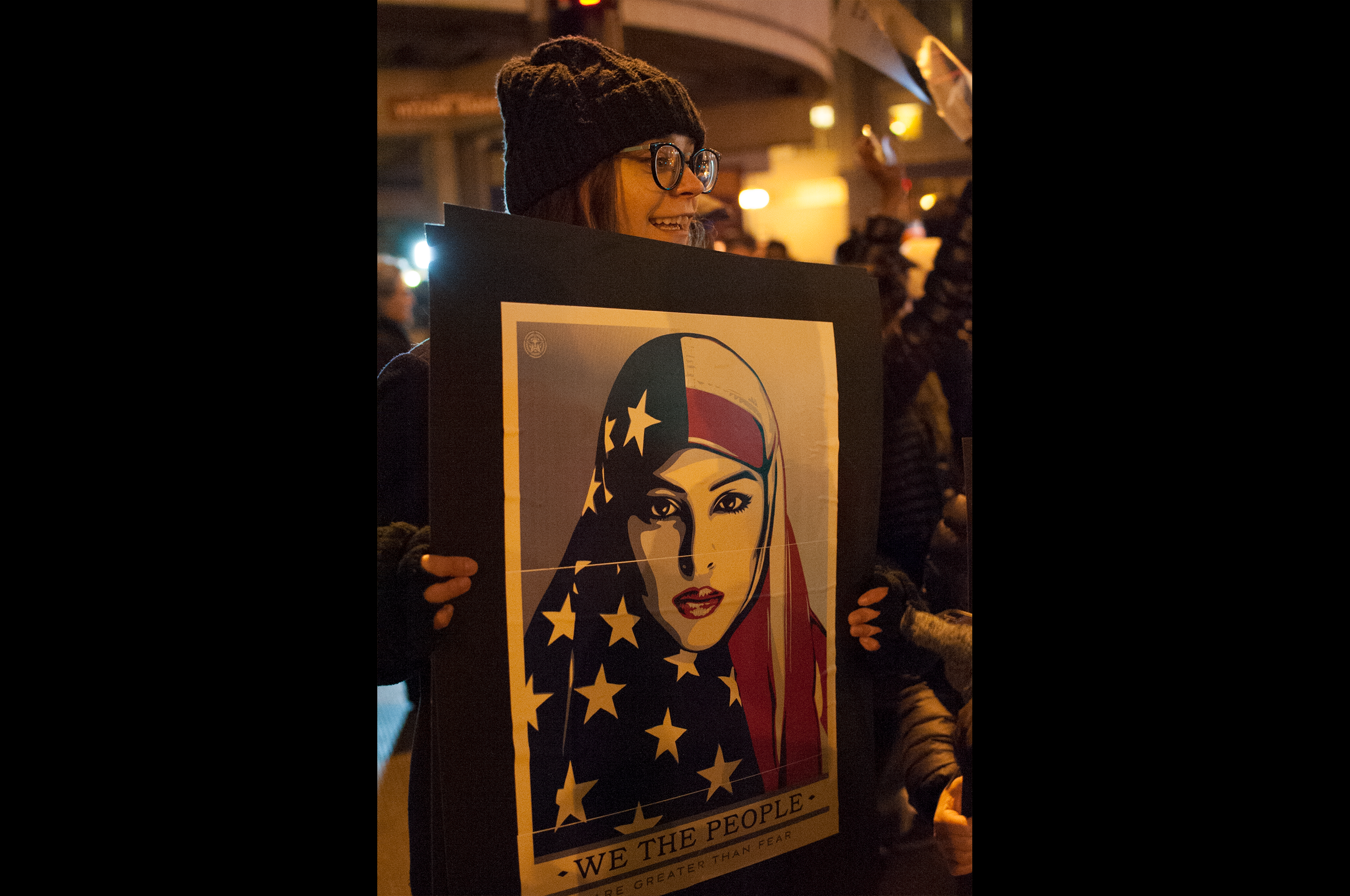 Tara: “I’m here because, if enough people protest, our lawmakers will take notice — maybe in Chicago. I know that Tammy Duckworth has our back, but if enough people show up across the nation, at least our Congress people can do everything to resist Trump just like Republicans resisted Obama for eight years.” 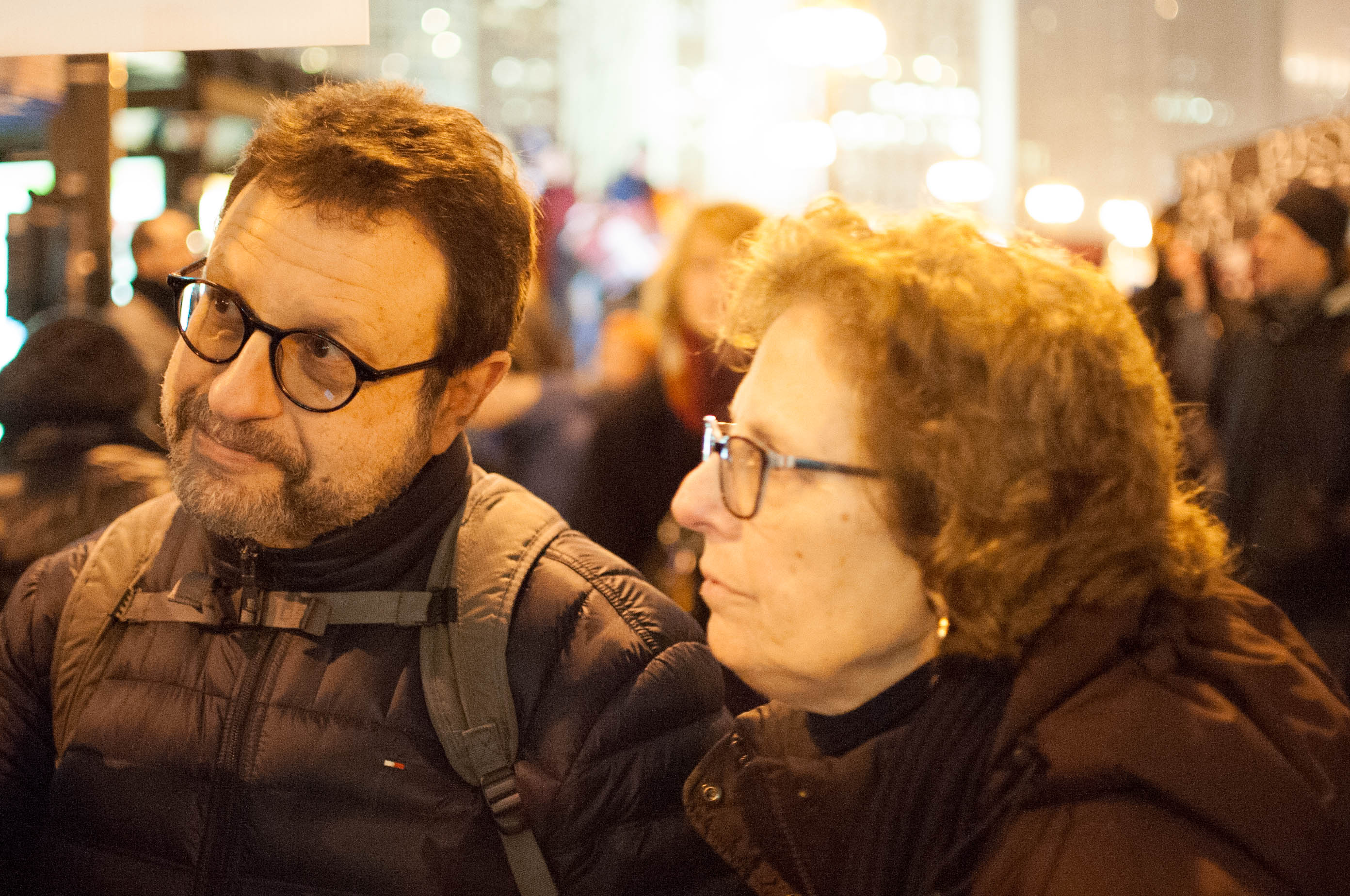 Mark: “The situation is intolerable. He’s not a legitimate president. His policies are contra to the America we know and that we believe should be, and we’re in big trouble. The more people express their disgust and dissatisfaction, the better. Not that we can change things immediately, but there needs to be a grassroots effort to try and change things.” 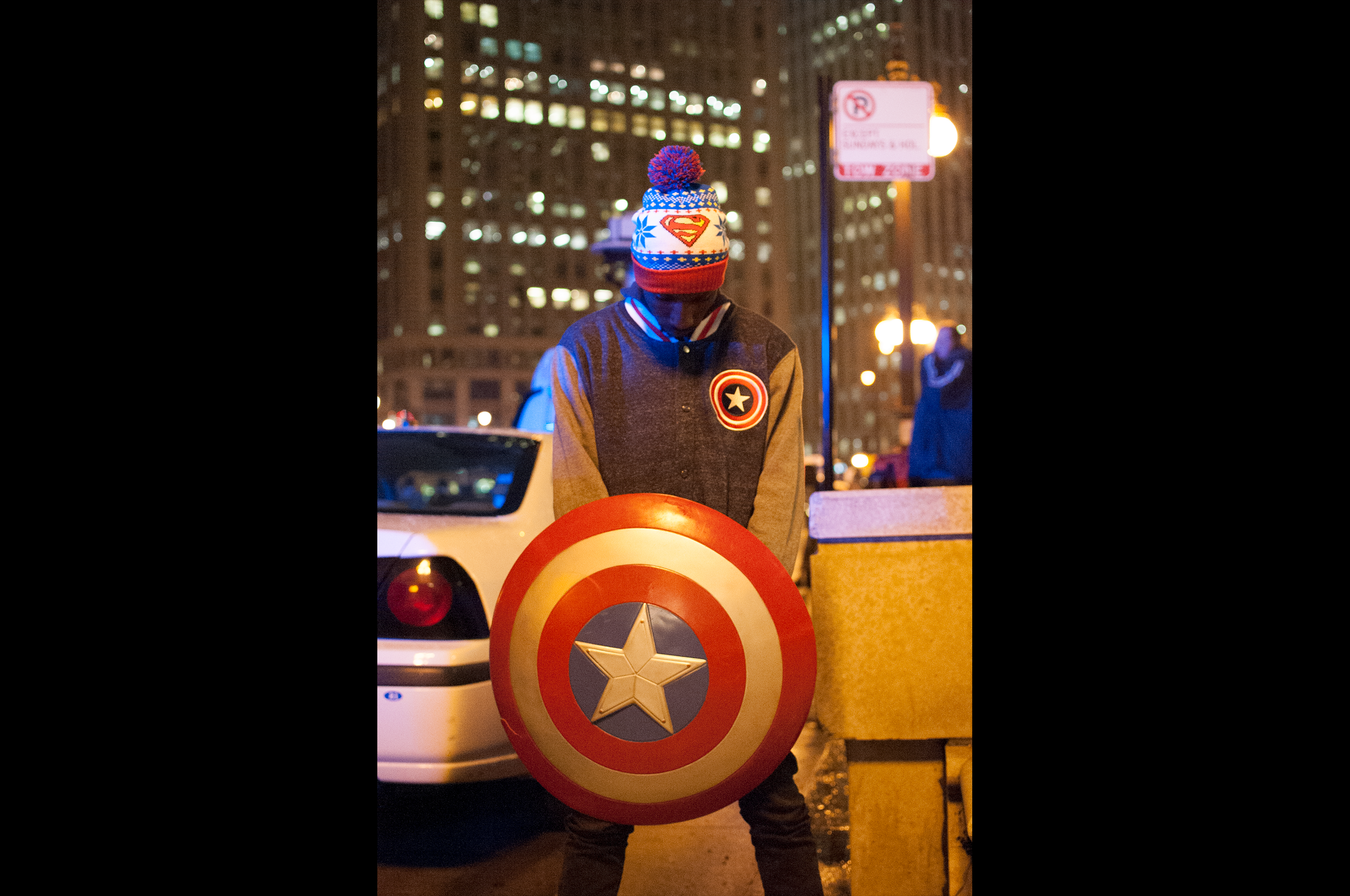 Jay: “We need to fight back against tyranny and oppression. We need hope. Hope is the main thing. That’s what it’s all about, or should be.” 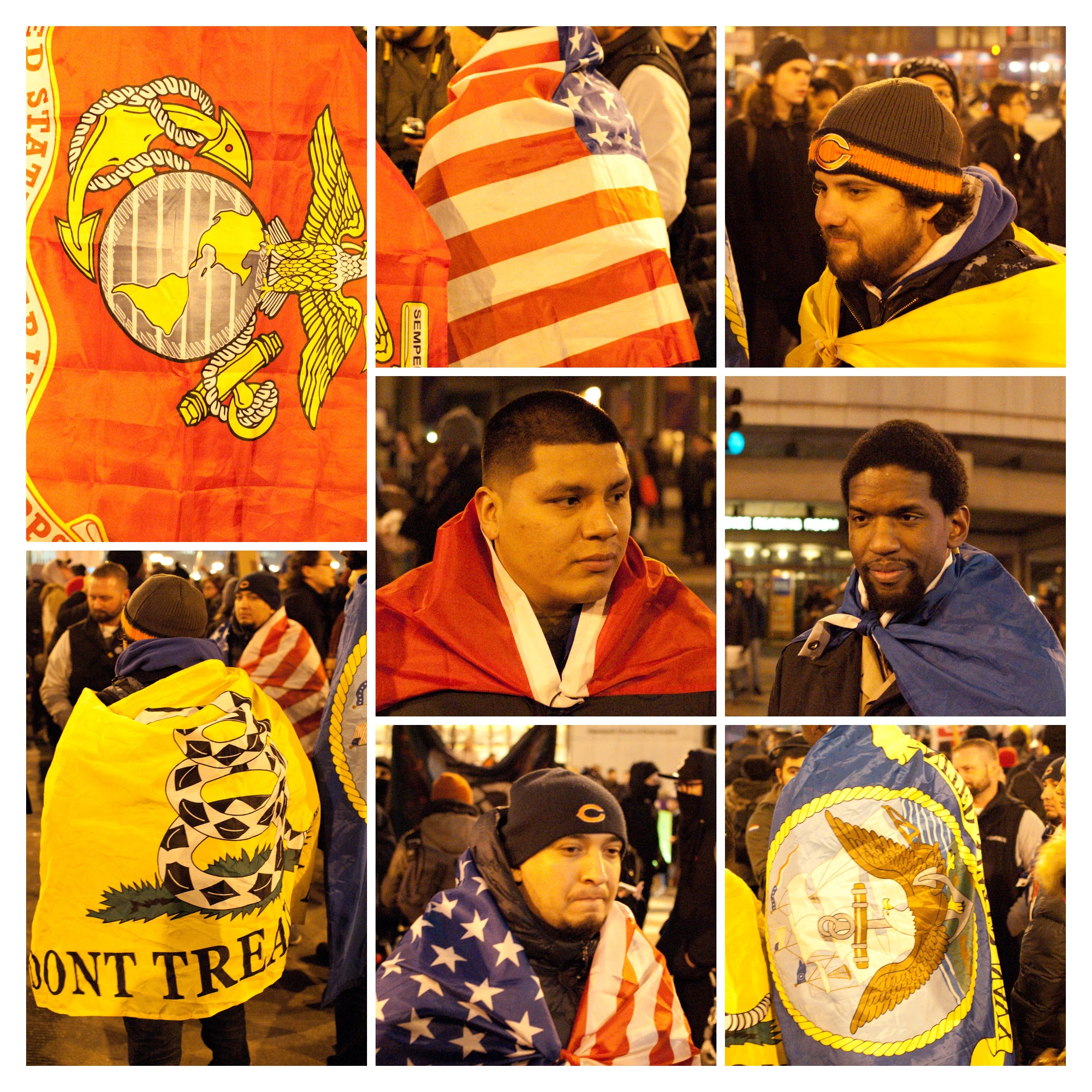 Carlos Luna: “If you look around, pretty much very American right? We’re all veterans, and it’s a show of support, protecting freedom and democracy here at home. We’ve done it enough abroad.” 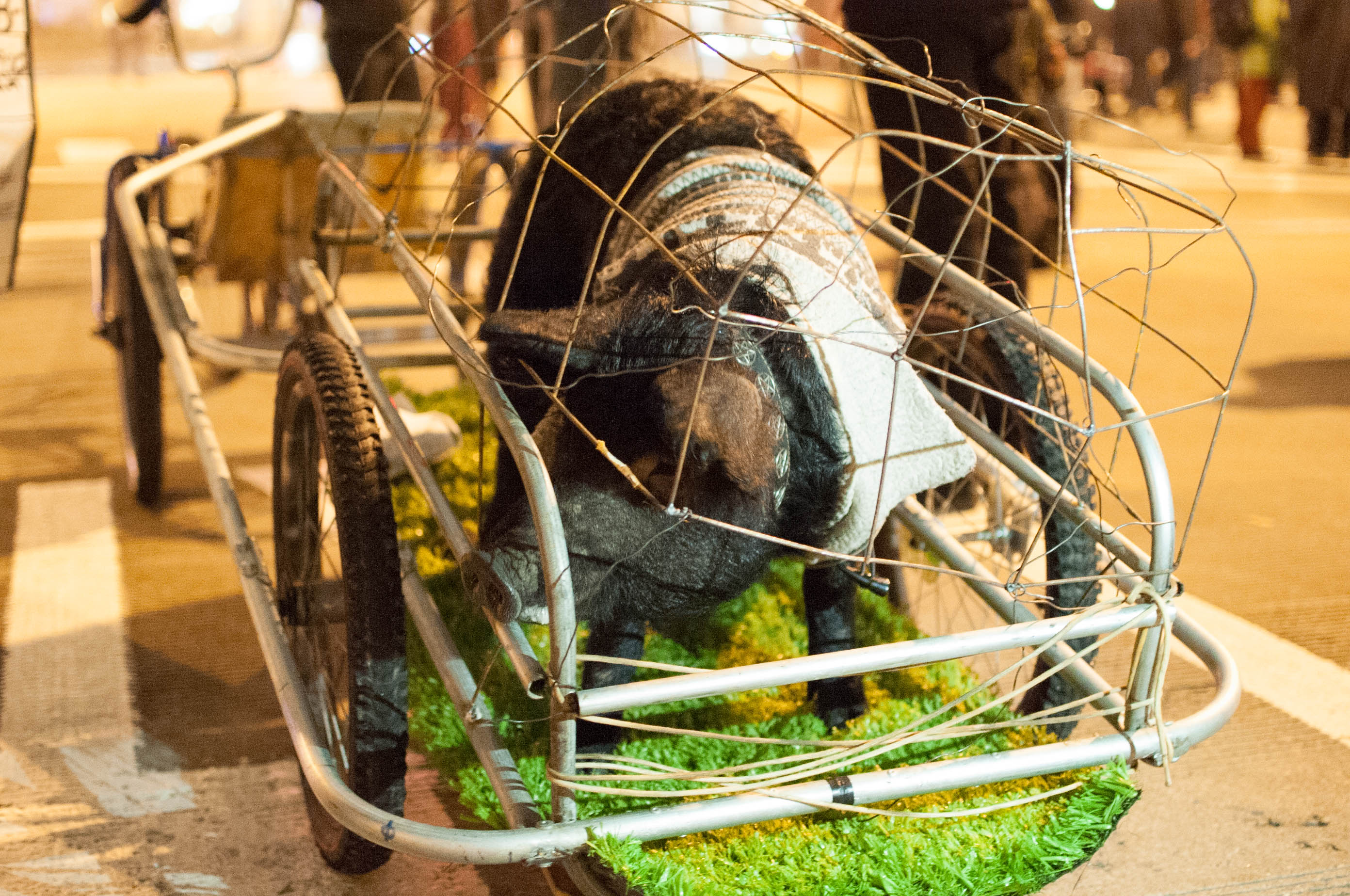 Kenny Mayle: “It’s Chief Wiggum — Wiggum for short — Clarence Wiggum. His satanic name is Baphomet. I don’t like not taking him anywhere when it’s logistically possible. I just don’t like being separated from him. I figure, I bring him down, he says a few words… he was at the protests last week and people seemed to like him. It brings out a different mood out of people, like a therapy animal for the masses.” 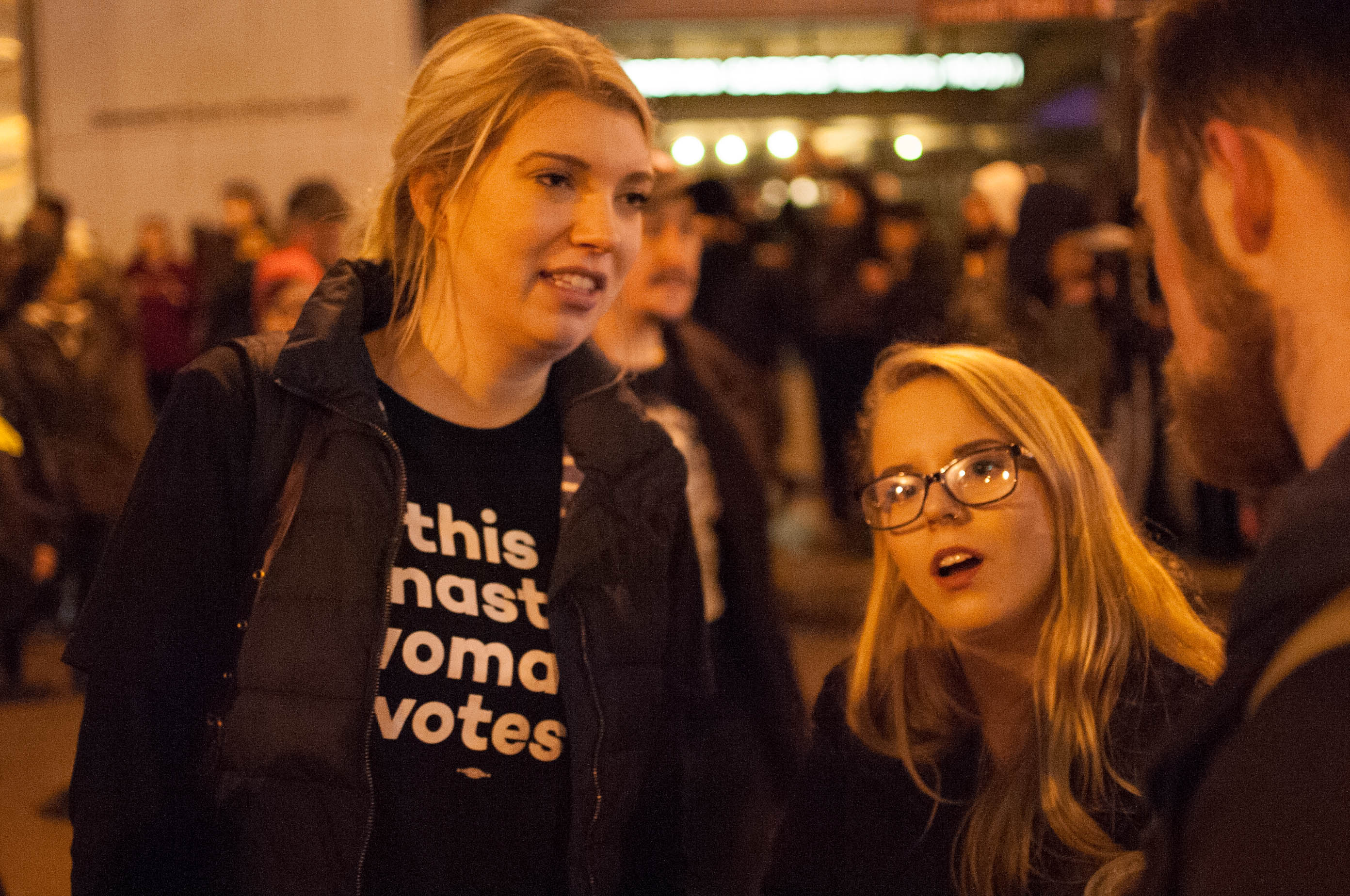 Kaitlyn Anglum: “I’ve been a Hillary Clinton supporter since before 2008. The reason I’m here is because I’m horrified at a Trump presidency, but I’m more horrified at the precedent it sets for the country we live in right now; that the least qualified male candidate beat out the most qualified candidate in history who happens to be a woman. I’m worried about my life as a female in this country, the children that I might bring into this world, the people I might encounter, and any single person who might have to endure some kind of burden under this presidency. That’s why I’m here.”

Victoria May: “I am not okay with the fact that because Trump is president, racism and everything else that comes along with everything he stands for makes it okay. It’s not okay. We need to say that. We need to make it loud and proud, and important.” 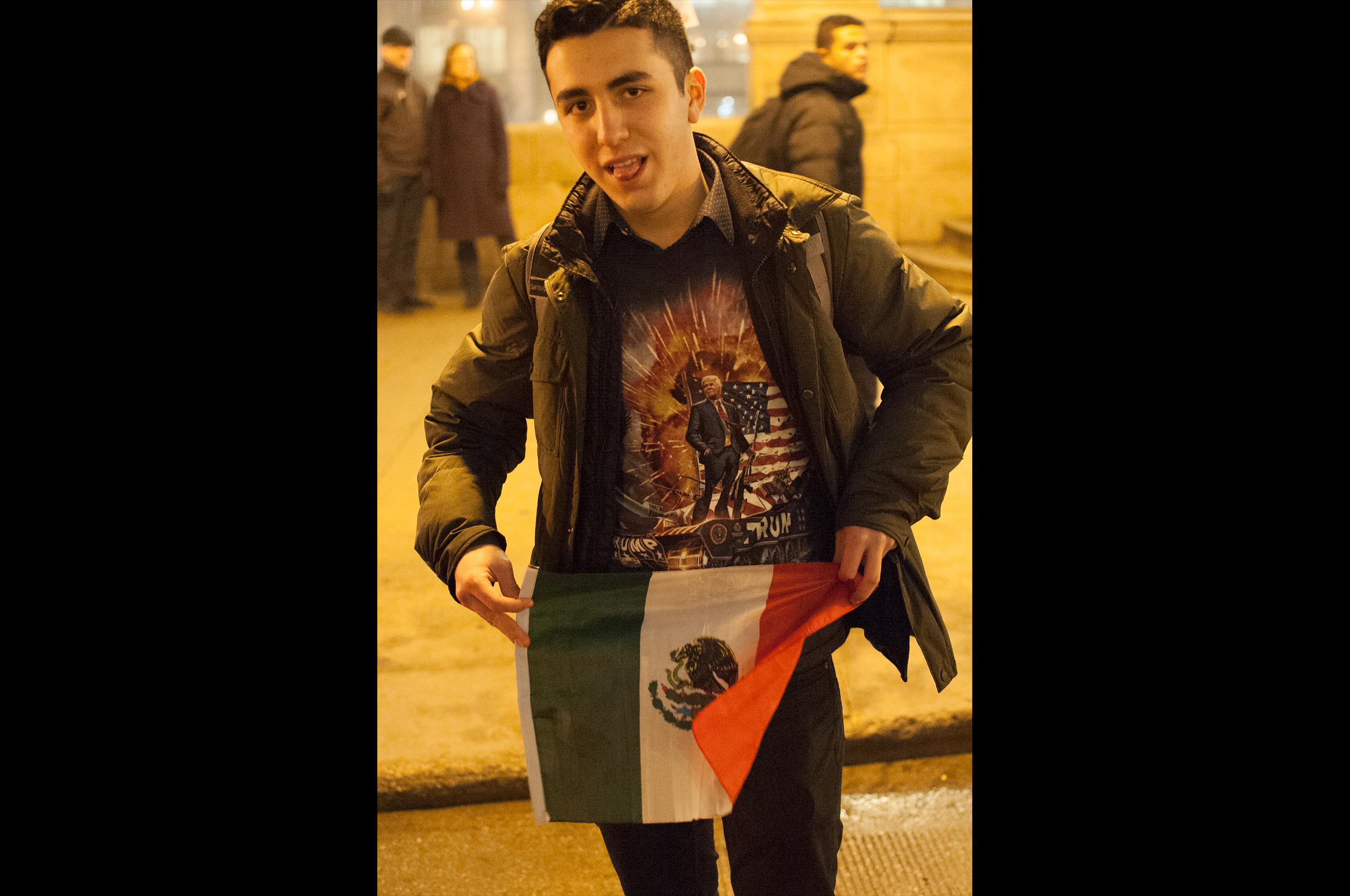 Daniel Valdes: “Yo soy Latino y yo digo soy un Mexicano! No soy racista, I’m not a rapist, I’m not a bigot, I don’t dislike — black lives do matter, I don’t know how else to express it. I’m just a conservative thinker and I think Trump is the lesser of two evils.” 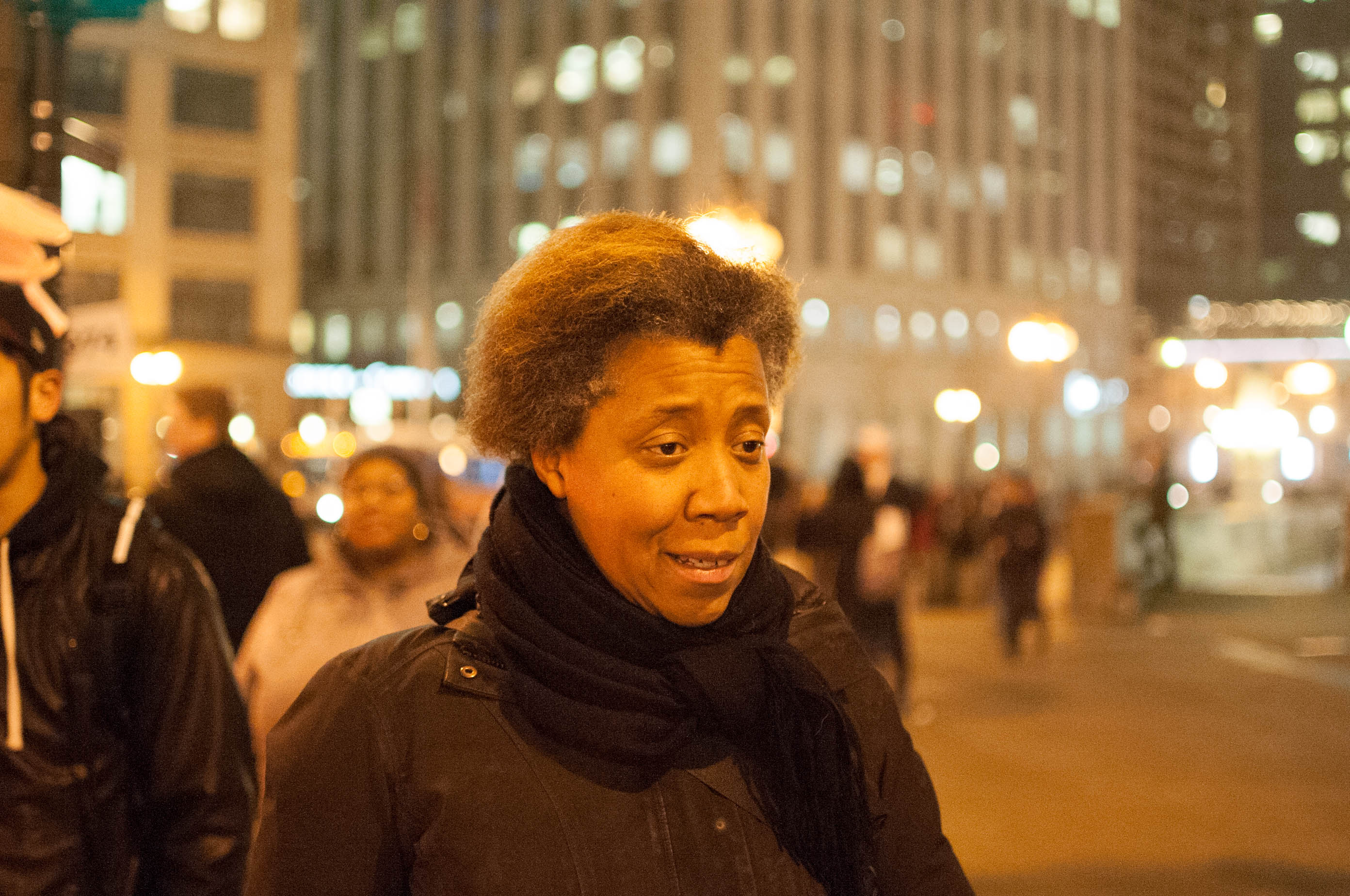 Eileen: “Slowly but surely all — well not all — but certain rights are going to be taken away: civil rights, LGBT rights, the climate denial. Little things that are going to get chipped away. At this point, I’m not going to take it anymore. I’ve done it before, but I’m not going to lay down for this one.” 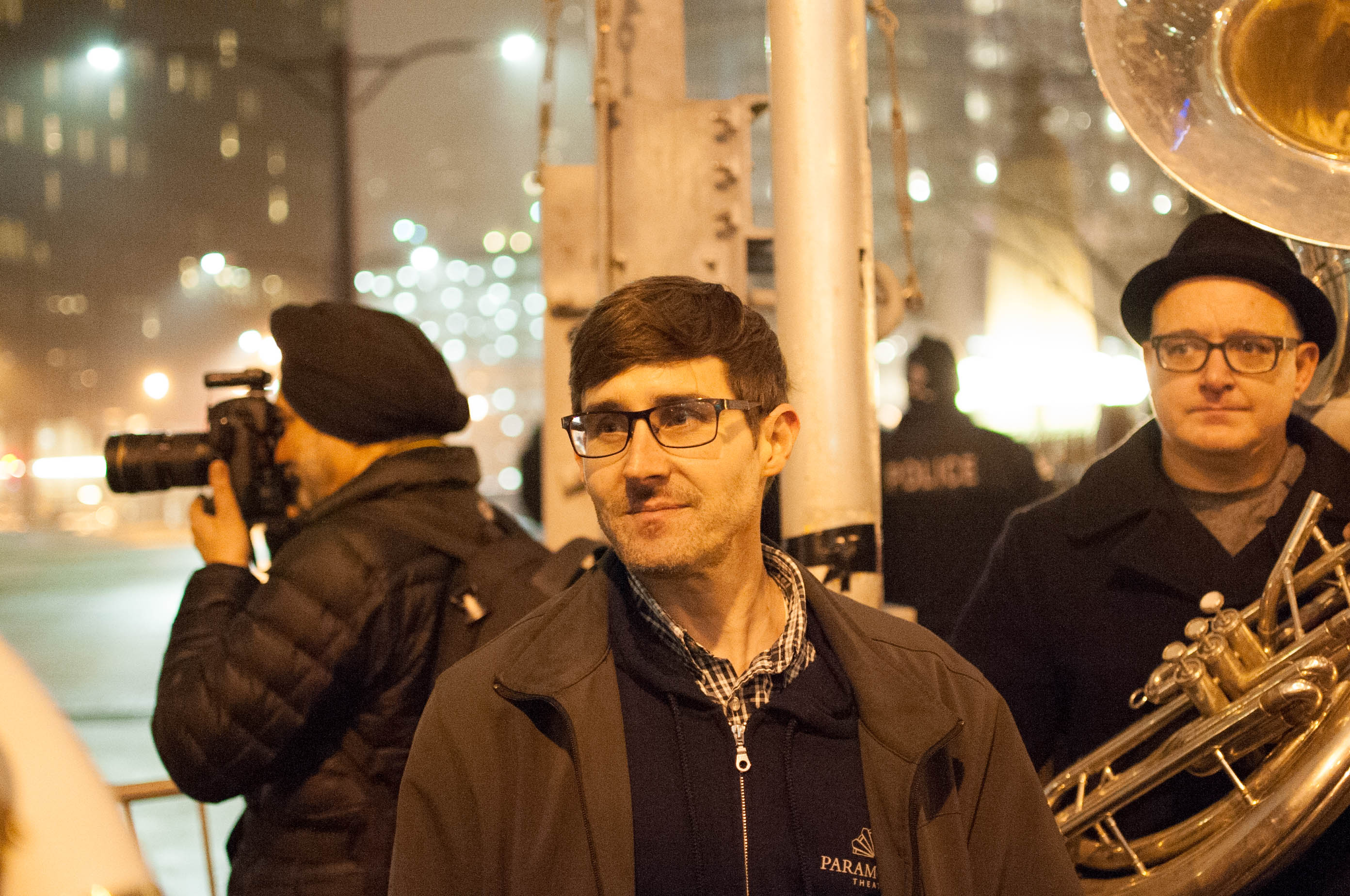 Steve D: “Our group is Sousaphones Against Hate and Baritones Resisting Aggression. We started when there was a fundraiser for Trump in Bolingbrook a couple months back, and we thought it was going to be a one-time thing. Unfortunately, he has continued along the path, so we decided to come out tonight and do the same thing.  The sousaphone is one of the lowest instruments, kind of like the opposite of a trumpet. With a trumpet you might have a king marching in. Someone you don’t care for is going to get the sousaphone.”