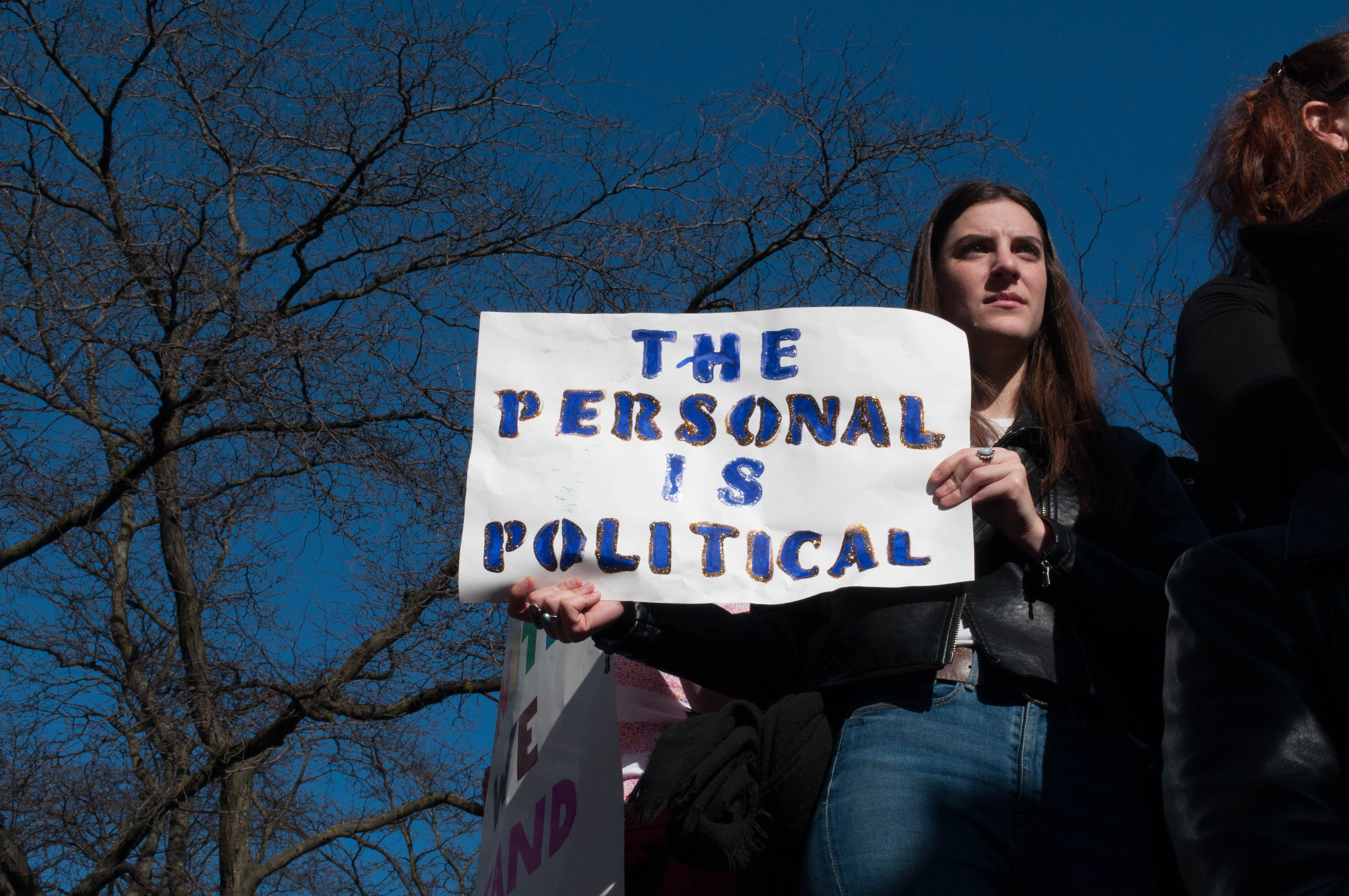 The march was alive. Messages of hope and resistance resonated from the crowd. Signs of all sizes stood over a sea of pink pussyhats. In the middle of Michigan Avenue, three protesters held bouquets of white polyester flowers: “We have these to give to police men along the way,” said Kathy F.

On Jan. 21, more than a million women from across the nation and world marched in the wake of Donald J. Trump’s presidential inauguration. An estimated 250,000 people gathered in Chicago alone, while its sister march in Washington D.C saw the biggest numbers. After eclipsing the estimated turnout of approximately 50,000, the Chicago march was “canceled” by its organizers; the crowd was so large, they’d run out of room to march.

What follows is the testimony of the citizens who packed into the Loop on a beautiful, sunny Saturday morning. 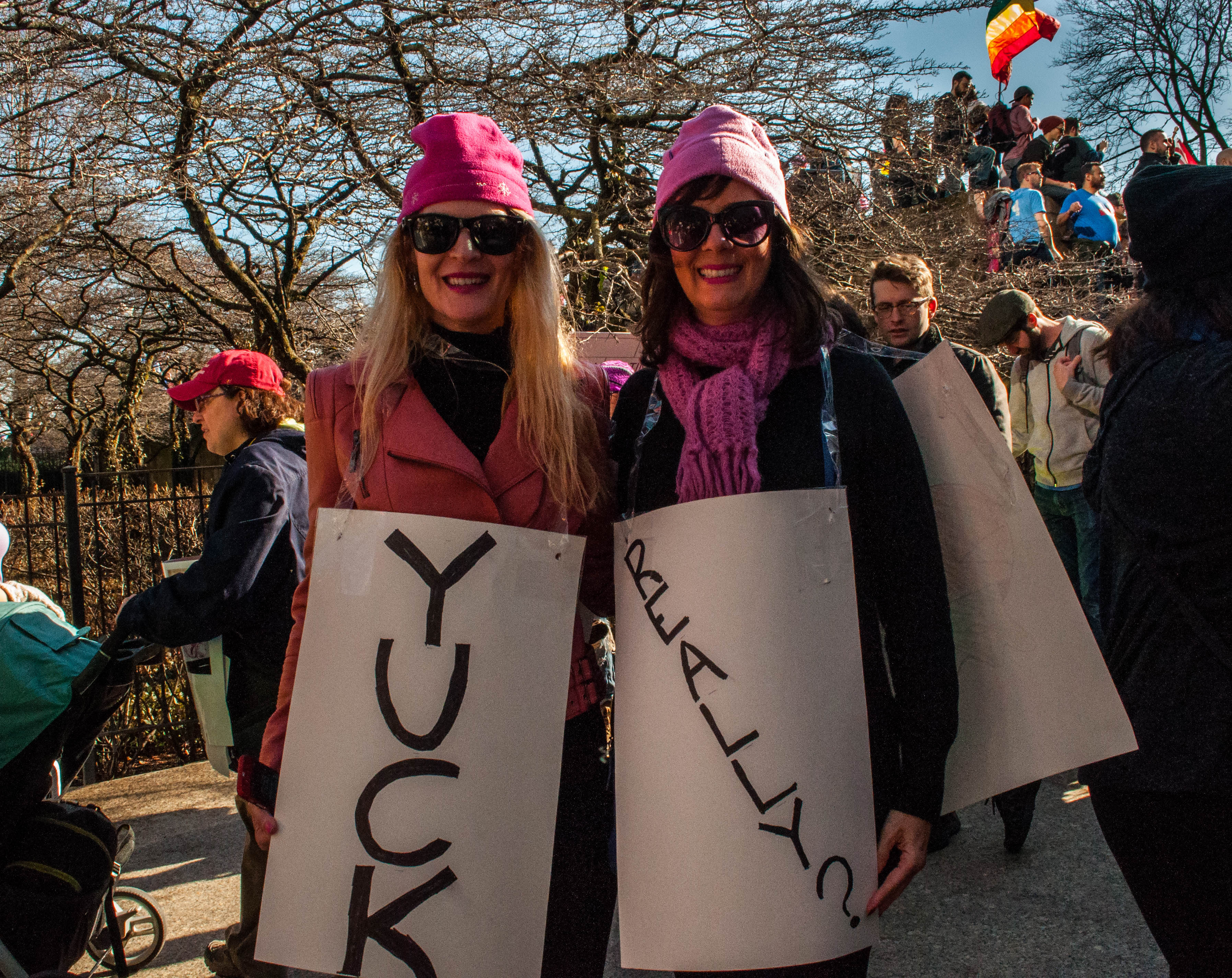 Noreen G: “We are here because we are really disappointed that Hillary is not our president, and we are scared for the future of our country. We are really scared — especially for women — and I think it’s really important that people stand up peacefully and make our voices known.”

Noreen G: “A sexual predator is now our president.” 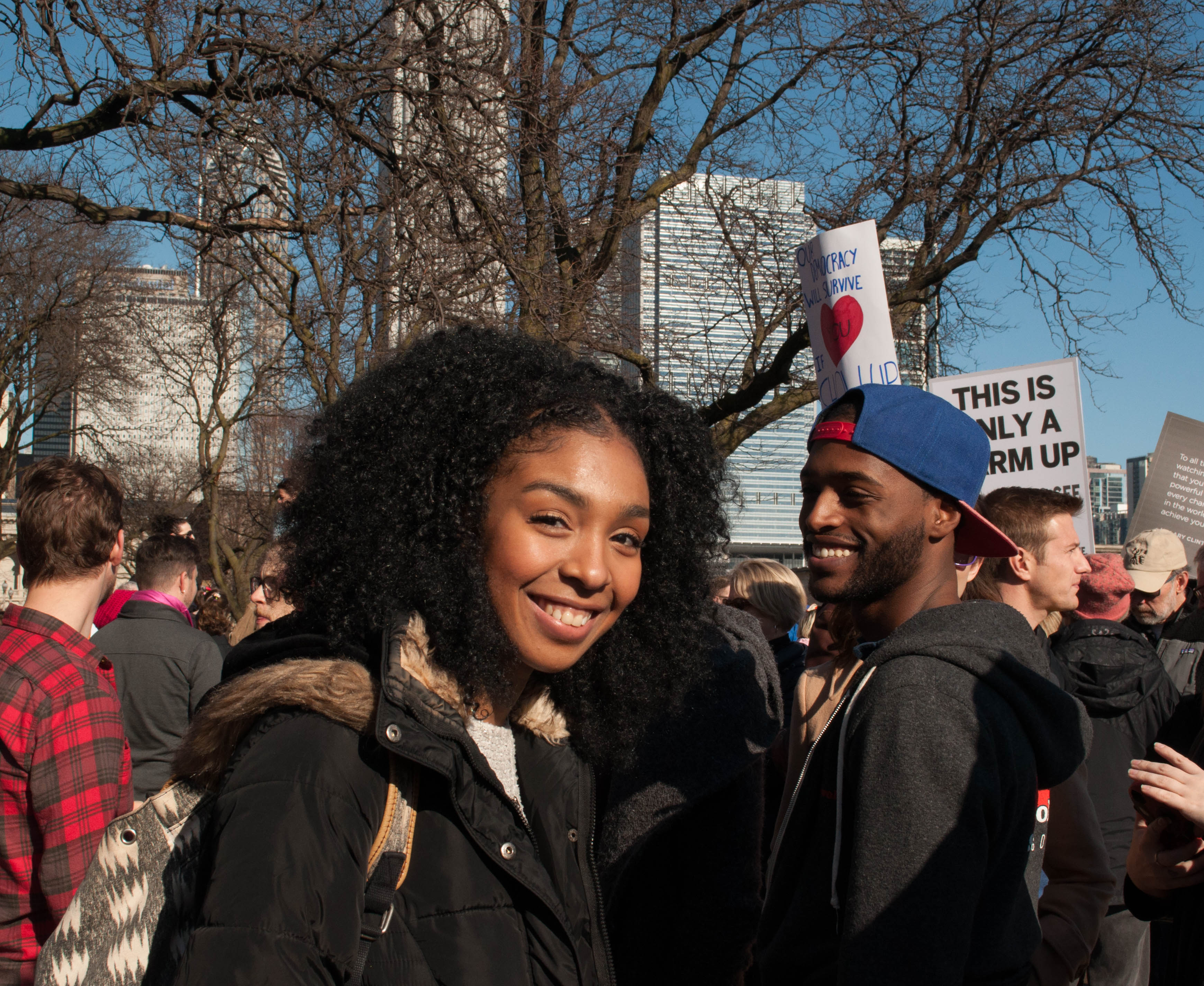 Kialya R: “I’m here to support women and to support all disenfranchised people. Right now, I think we need the support. We need to know that people have our back — we have a representative that doesn’t have mine.” 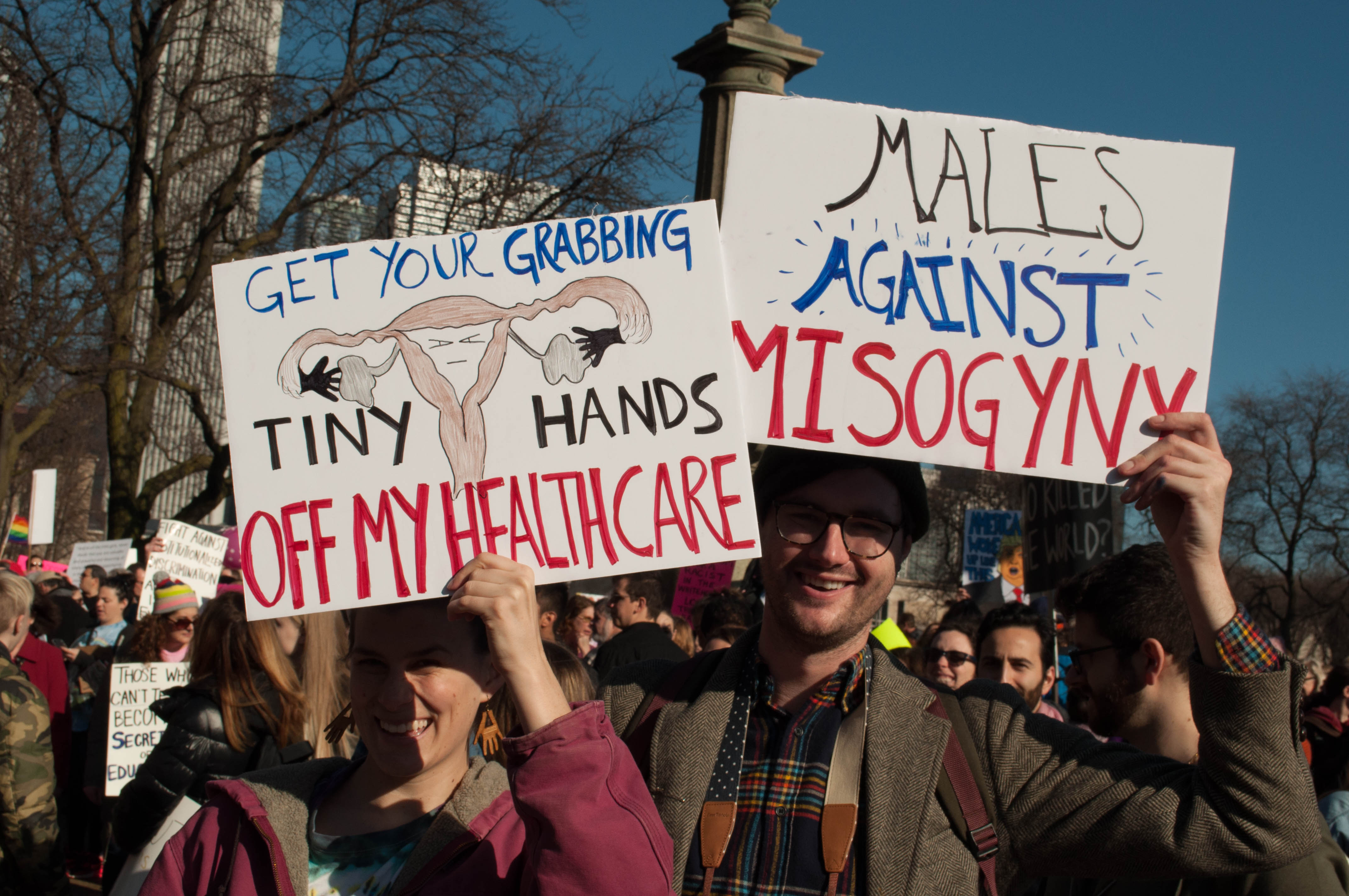 Tony P: “We are just sick of the way that women — every minority and every other person — is being treated lately by the media and by Trump. We are future healthcare workers, and we are pretty disgusted by the immediate actions of President Trump. I can’t even say that it makes me sick.” 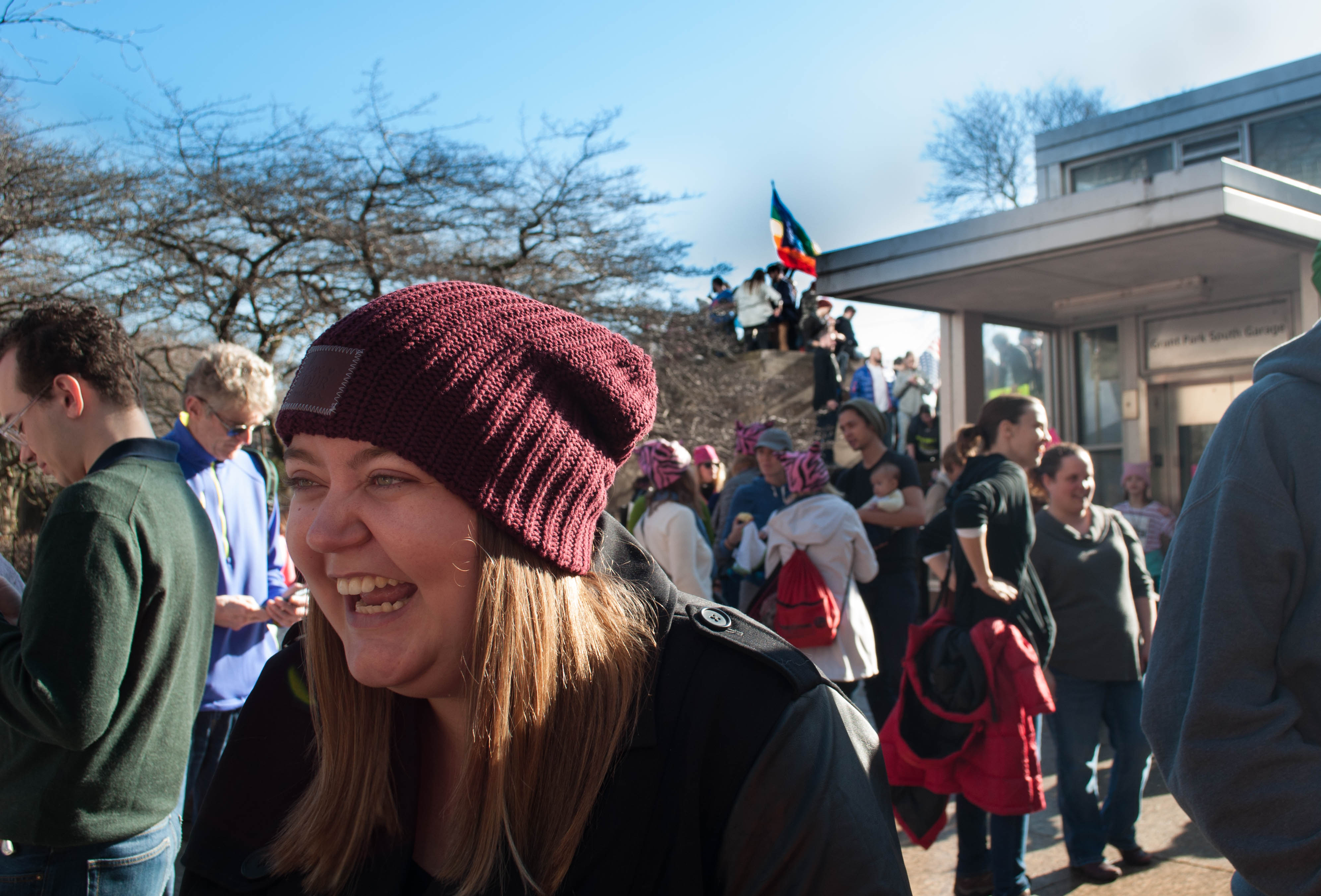 Lindsay Goldstein: “It’s really incredible; I’ve actually never been to a rally or protest of any kind before. I’ve always wanted to and I am just nervous in crowds. I really wanted to do this, so I woke up this morning and said to my boyfriend, ‘I DON’T KNOW IF I CAN!’ But he got me on the train and I am so glad I am here.” 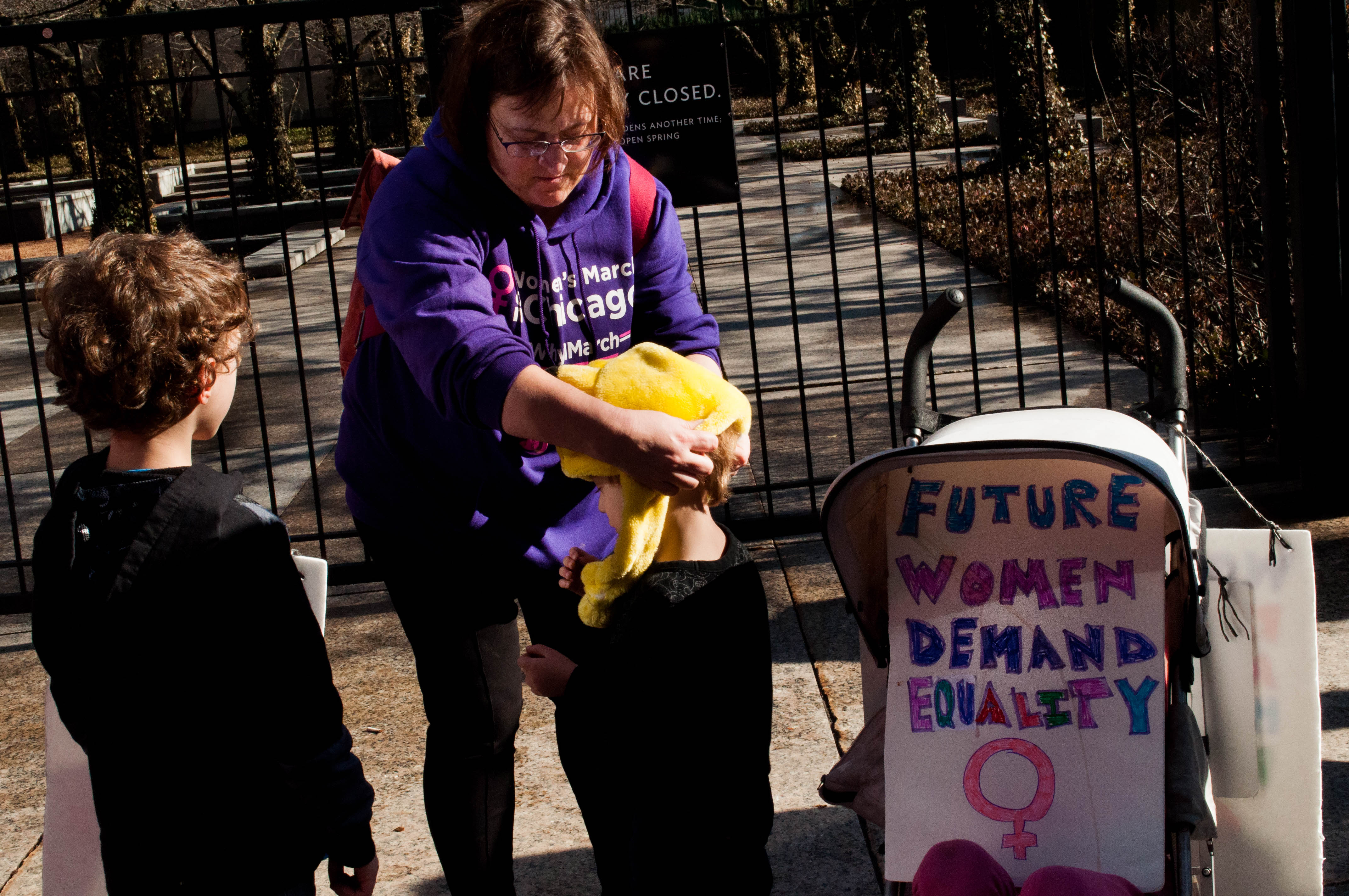 Ilene S: “I’m here because I want to set an example for my children as to what civil disobedience is about, and it’s something that I feel is is particularly important now. I want them to feel that empowerment as well.” 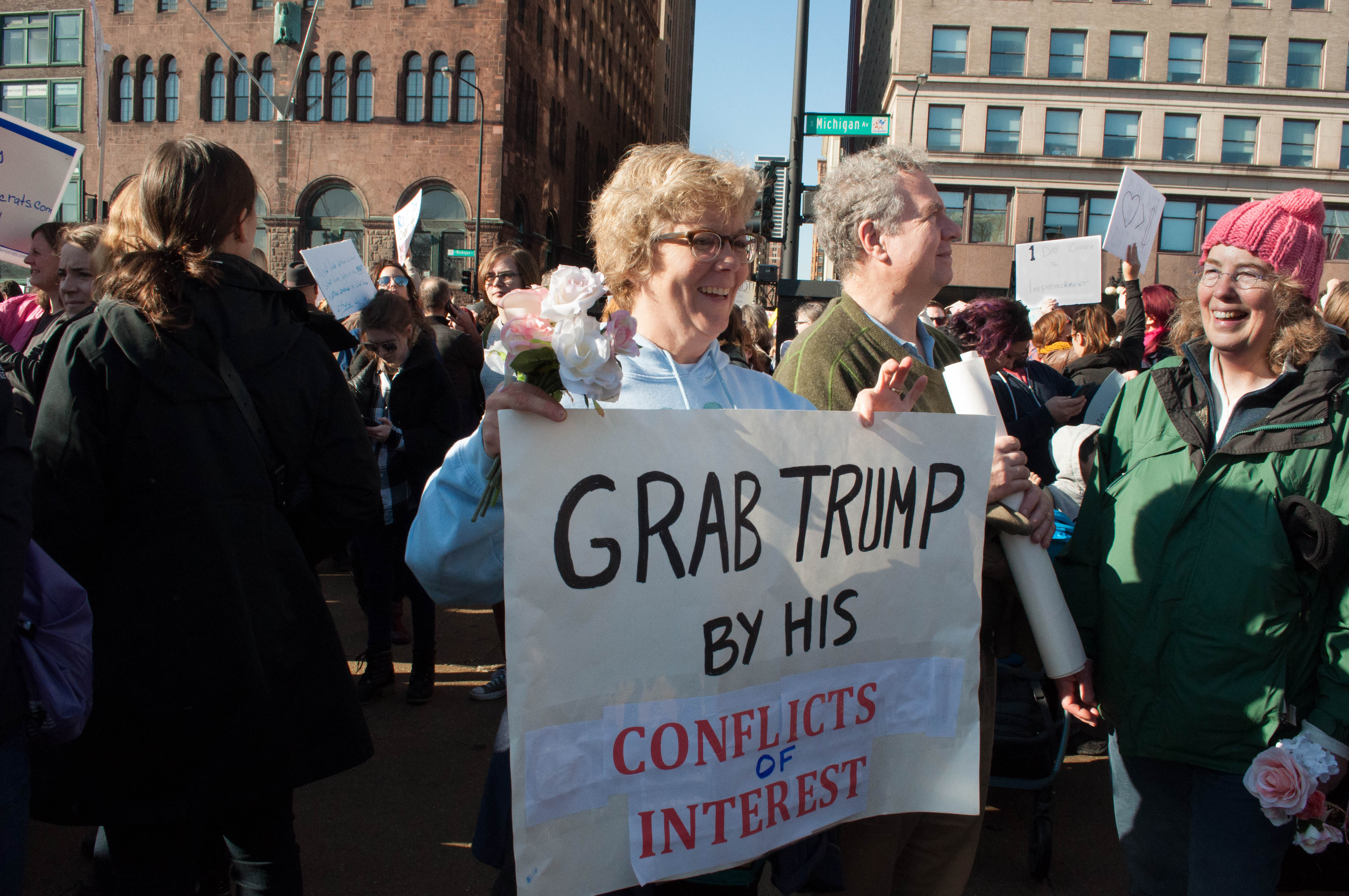 Kathy F: “We just want to appreciate all the people that are keeping us safe and protecting us, helping us exercise our constitutional right. We are handing these out to the police and those monitoring the march to make sure everything stays safe.” 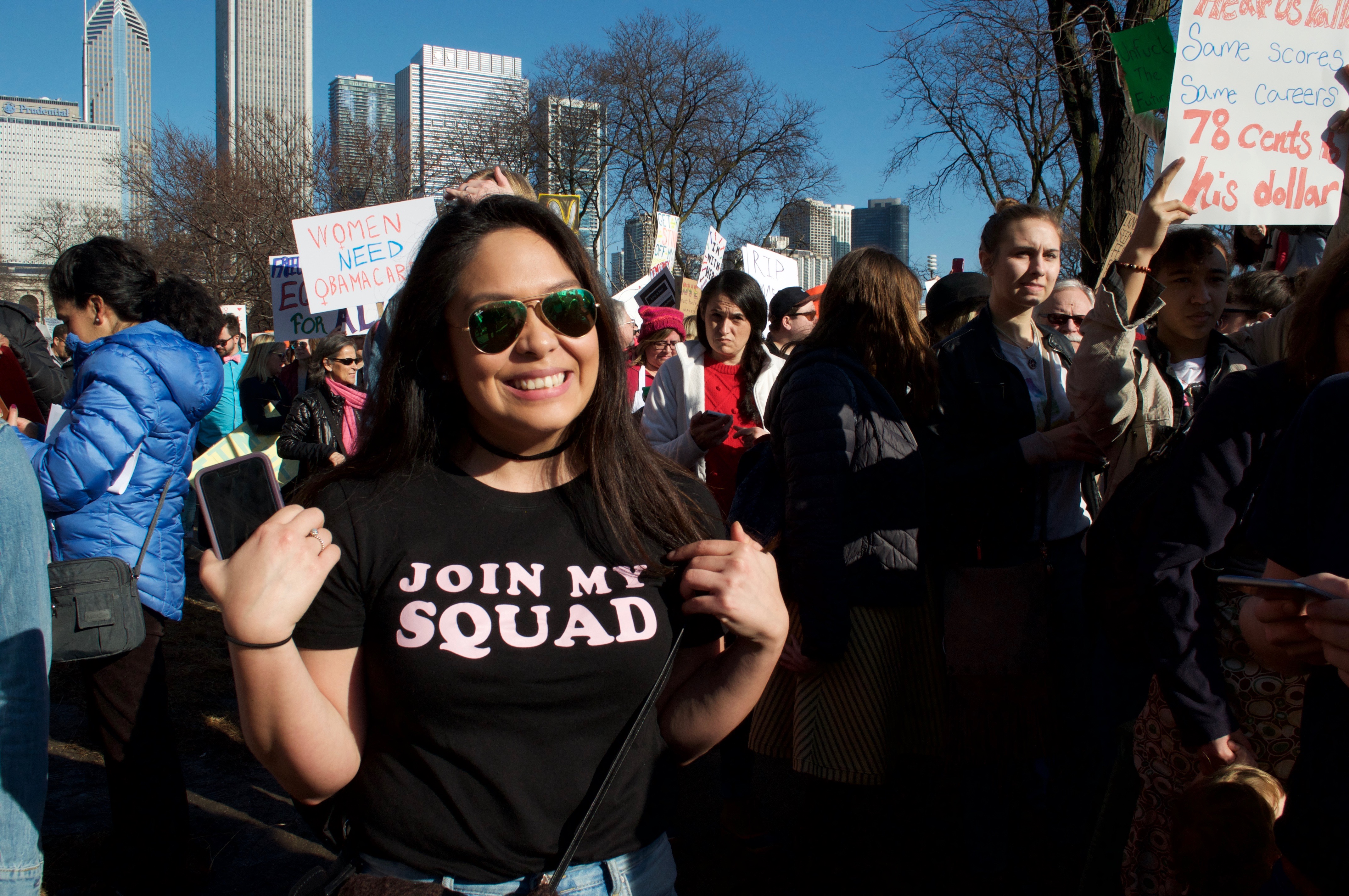 Vanessa Cadavillo: “I’m here today because I think women’s rights are fundamental human rights, and quite frankly I don’t know why we should still be having to fight for these rights. I think we are sending a message to the administration that we are not going to back down, and this is one of many to come.” 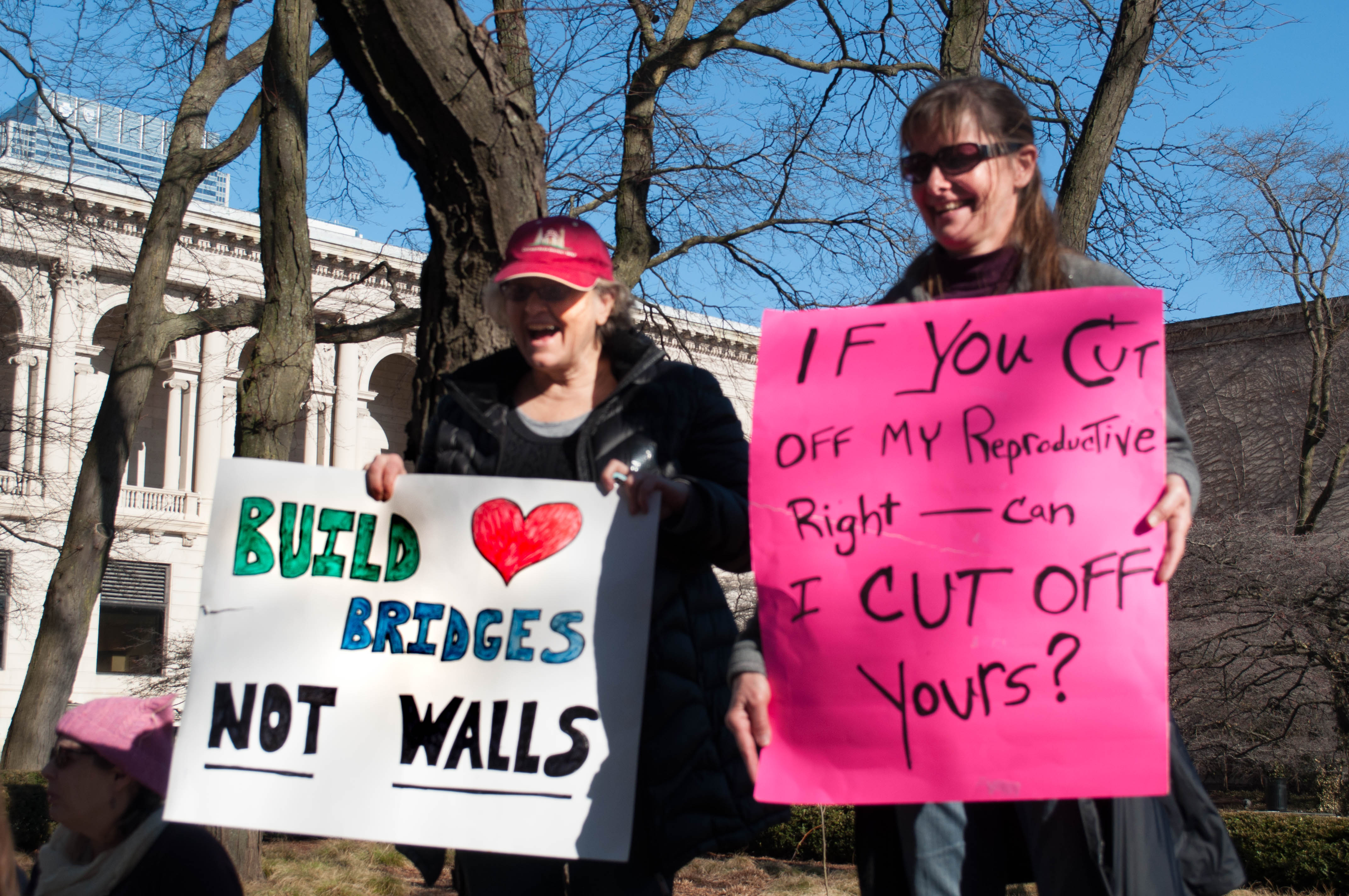 Elizabeth B: “I think this is hope. I feel like our election was stolen from us, basically, and I don’t know if it was a crime — I don’t know whats going on — but I think there is a lot of cheating going on. I think there is going to be a lot of people making a lot of money, and it’s not going to be for the people; it will be for the very few who are right now in power. That is wrong. That is not how democracy works.” 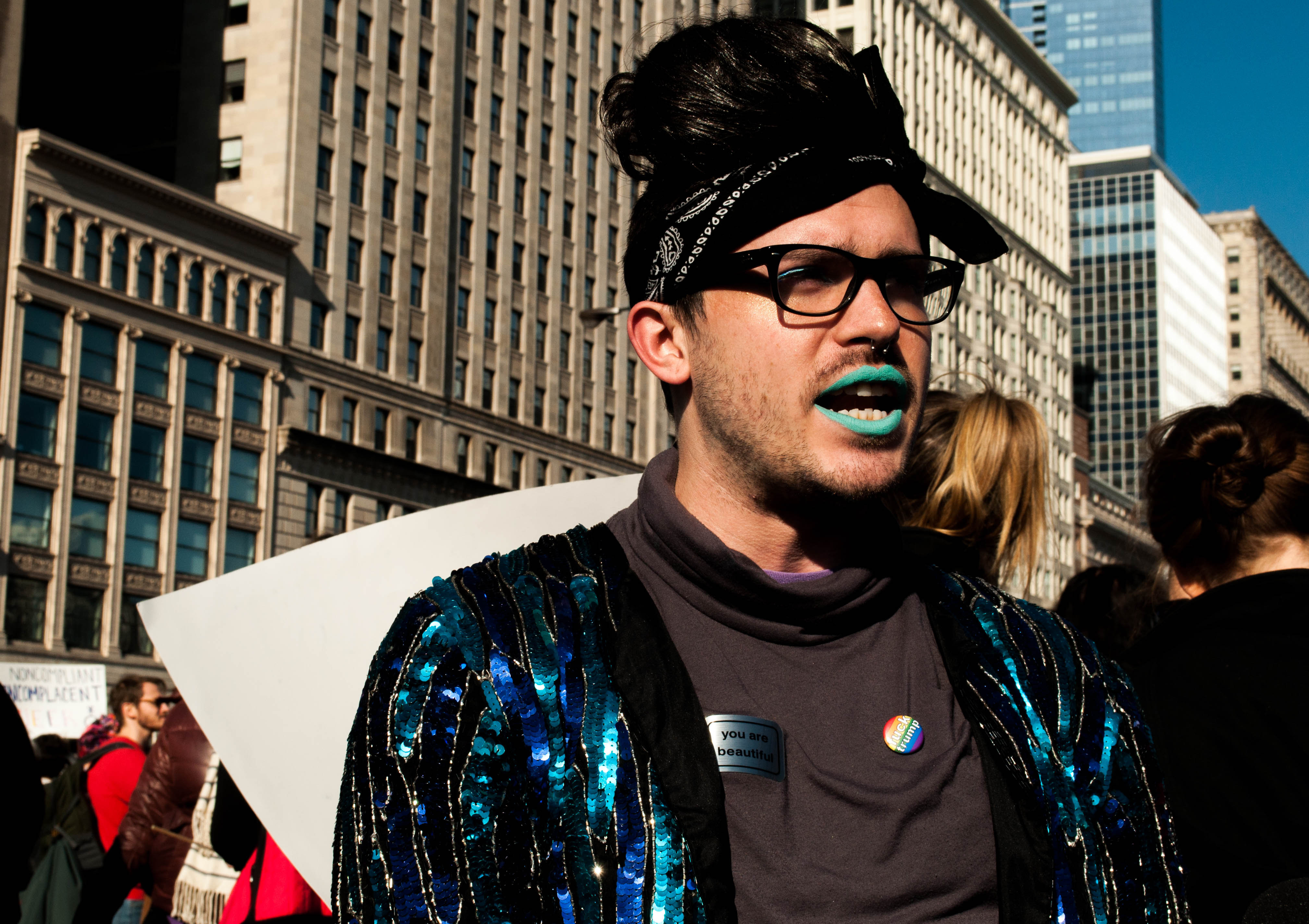 Daryl G: “I came here with my two friends from law school and we are obviously disappointed with the results of the election; not in the sense that it was not our party that won, but in the sense that it was a demagogue who is not going to be fighting on behalf of the people. And so that’s one of the reason as to why multiple ones of us are pursuing public interest law, because now we have someone who is not working in the public interest. We need to have more people being activists, being able to mobilize and organize and be working on the public’s behalf. We aren’t going to have someone like Obama who supported us so incredibly, and also to feel like we are apart of something. Everybody needs a pick up after the election and this is our pick-me-up; seeing all these people out here for the same reasons and the same cause like love is inspiring, and I needed that.” 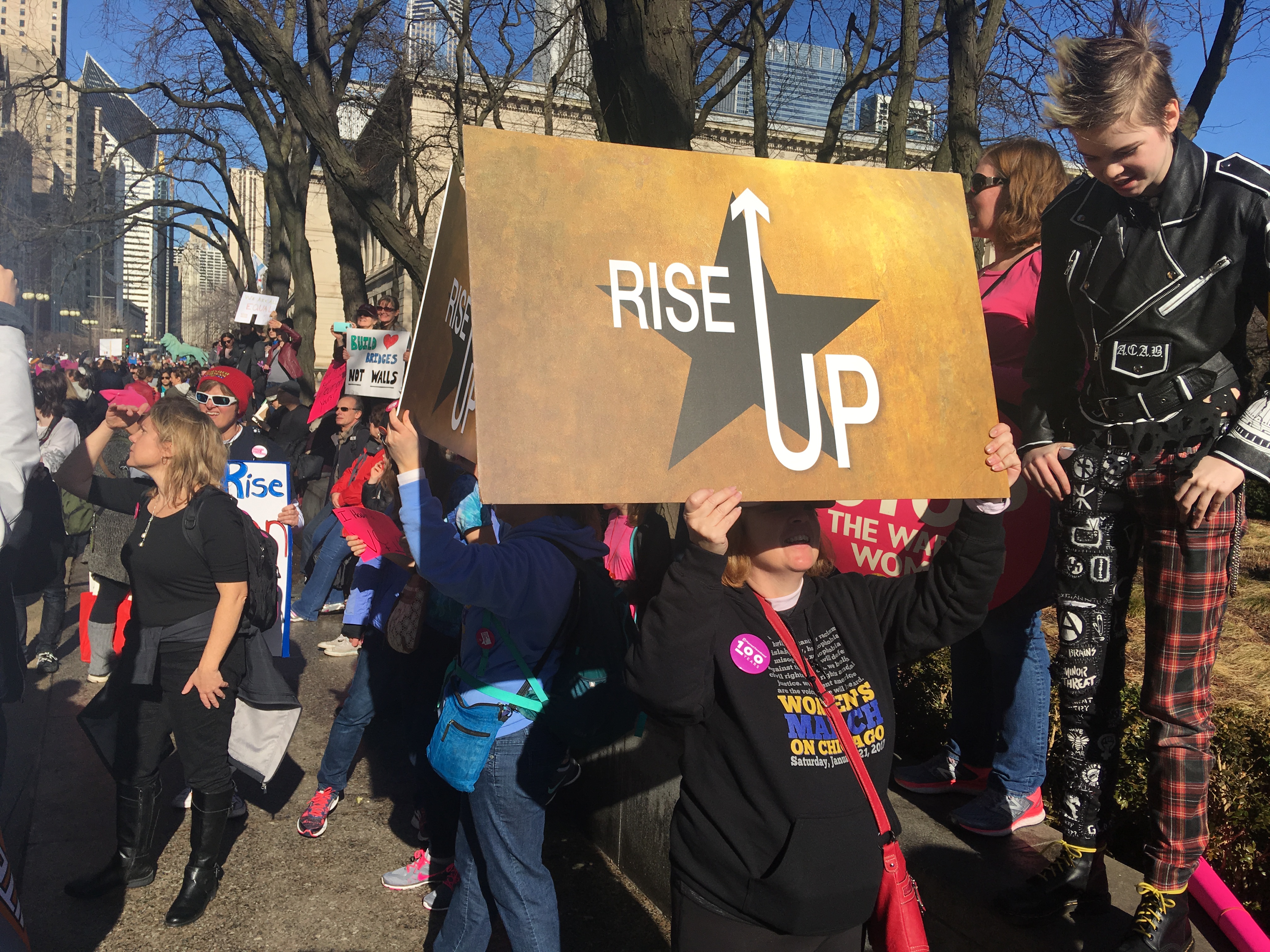 Samantha T: “Some people are saying it’s an anti-Trump march. I actually think it is anti-Trump-behavior march, because I just can’t deal with the behavior of this man, and I feel he has not earned the respect of the people. I work in education and I work with lots of little girls, and I don’t want them growing up thinking the way this man behaves is OK. And I also feel the way he behaves will trigger other people to think it’s OK.  This is basically us saying: ‘No, sorry, we don’t know what you are doing with government, but we are not going to put up with your behavior.’” 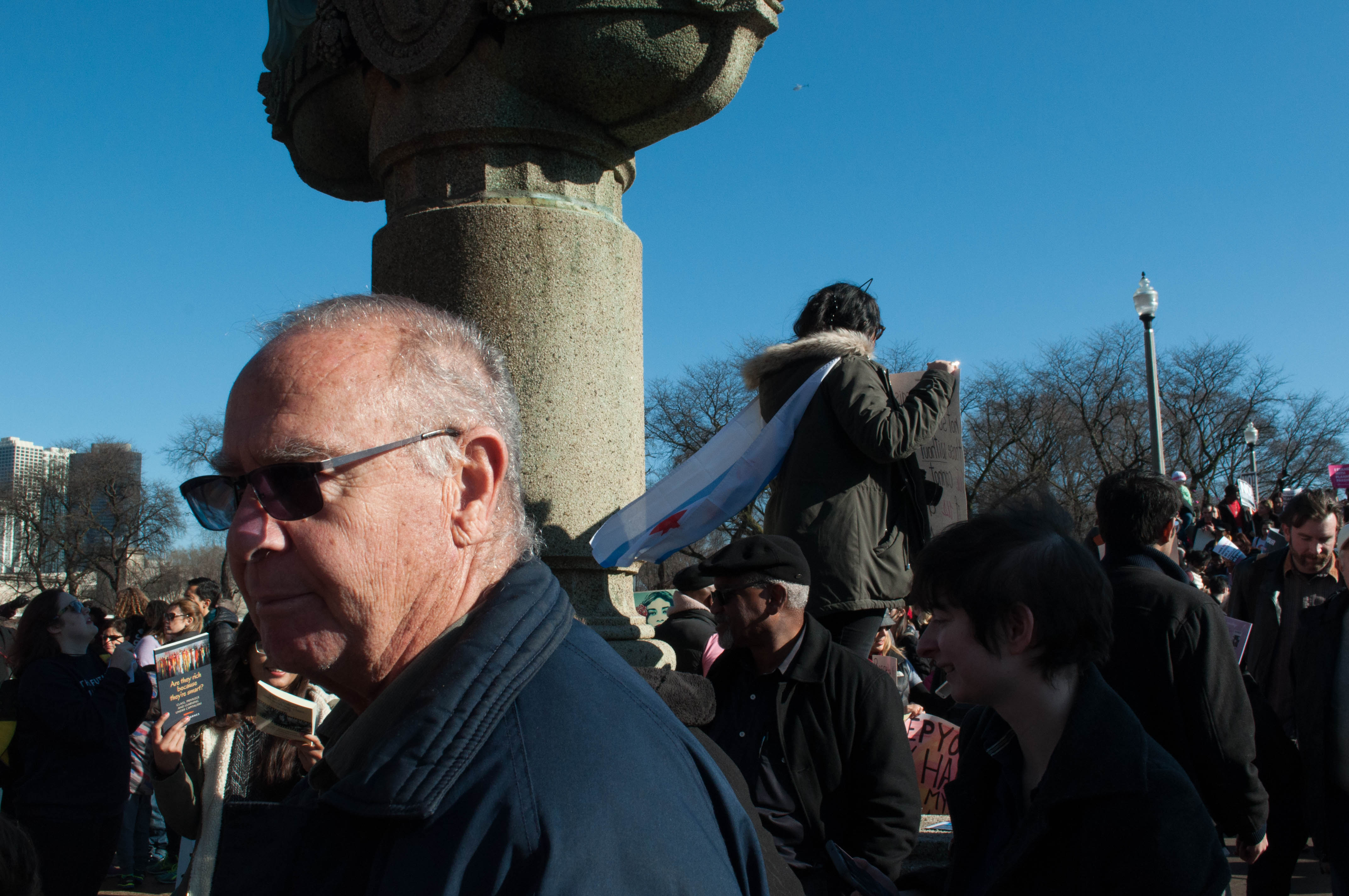 Dan Fein: “The truth of the matter is that this demonstration would have never taken place if Hillary Clinton had won the election. This is an anti-Trump demonstration, and the Socialist Workers Party does not think Clinton is any better than Trump. We ran a candidate against both of them. This demonstration is about getting Democrats elected in 2018, which we disagree with; we are not on board with participating in the march. However, we are here with books about the necessity of working people to break with Democrats and Republicans, and why we need to build our revolutionary party to lead the working people to overthrow the government.” 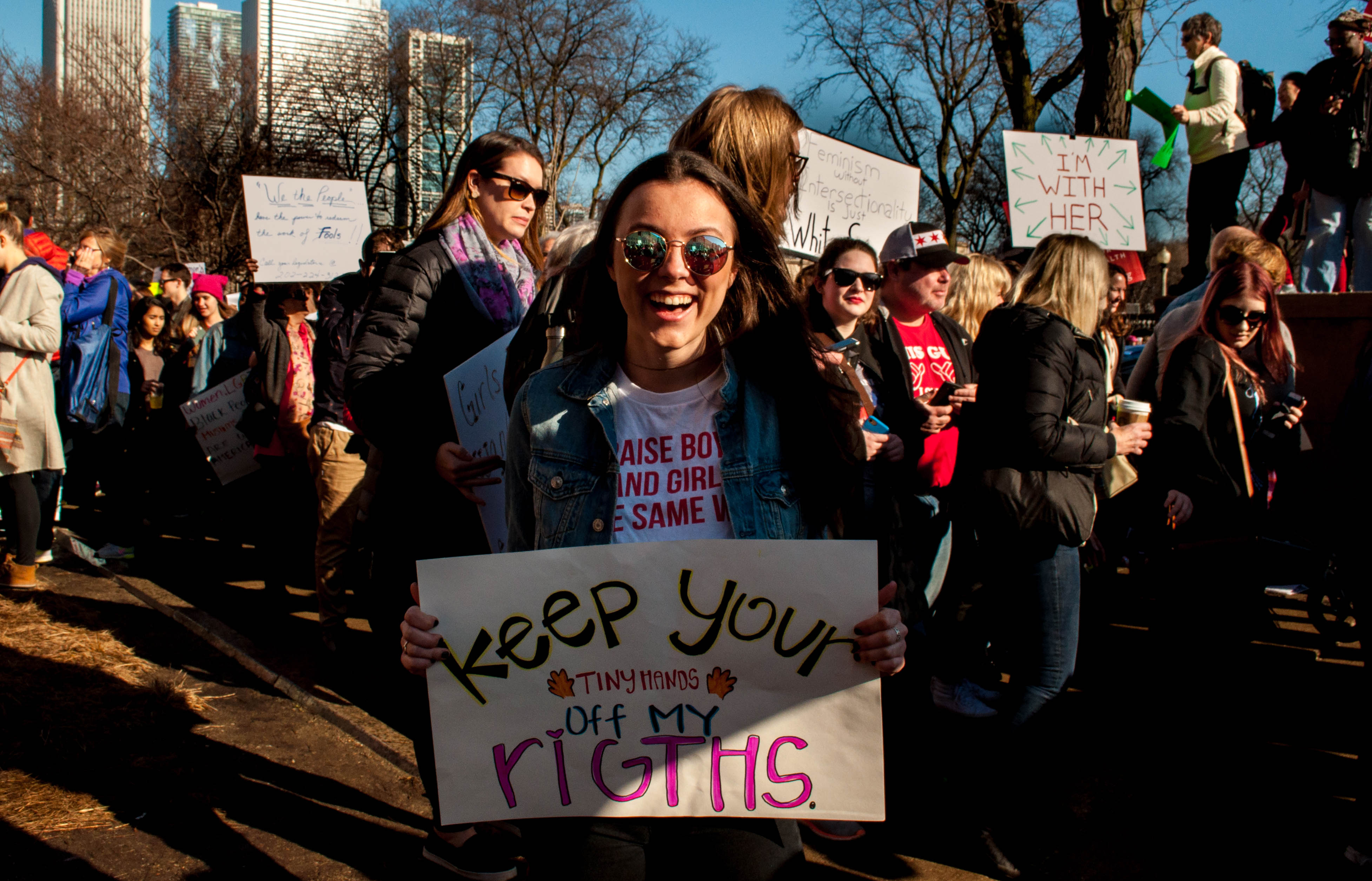 Carly Moore: “I’m here because we are starting to normalize what Trump has said with his rhetoric and that is not OK. I am here to say that is is not allowed to be normalized, and when it comes to Roe v. Wade and decisions of the Supreme Court, women are going to take a stand.” 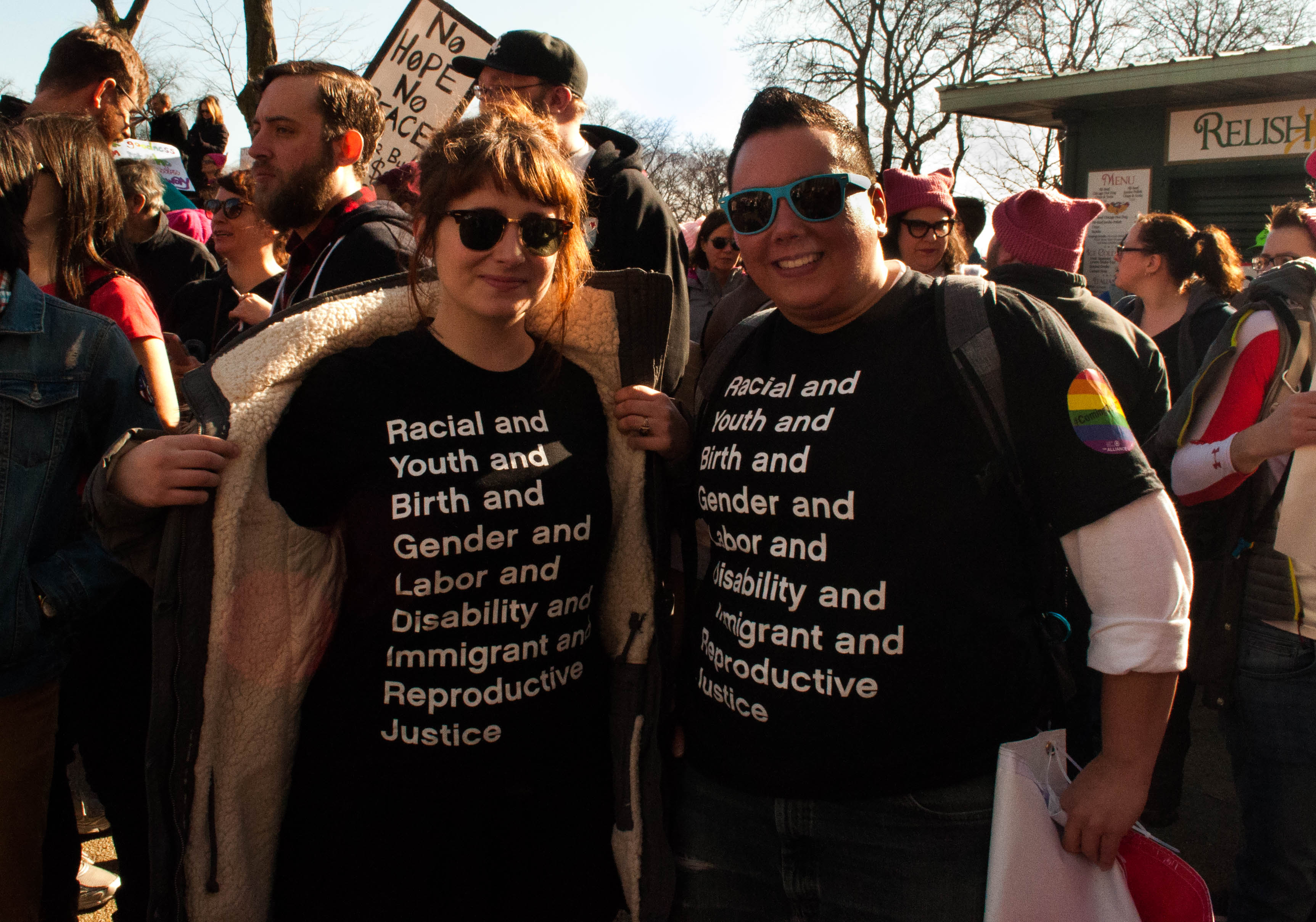 Carly Petrusky: “I work for the Illinois Caucus for Adolescent Health. I am their administrative coordinator. We are an organization that does education and organizing in the Chicagoland area, but also statewide over reproductive rights and sexual health. We are a “RJ” organization: a reproductive justice as well as racial justice as well as disability justice organization. We are all encouraging young people to lead our workshops. Young people lead any kind of organizing we do, and it’s been utterly terrifying to see young people be so upset and feel so unsafe and in danger after the election. I’m here today to march for those young people as well as the people who are represented on my shirt and my loved ones too.”