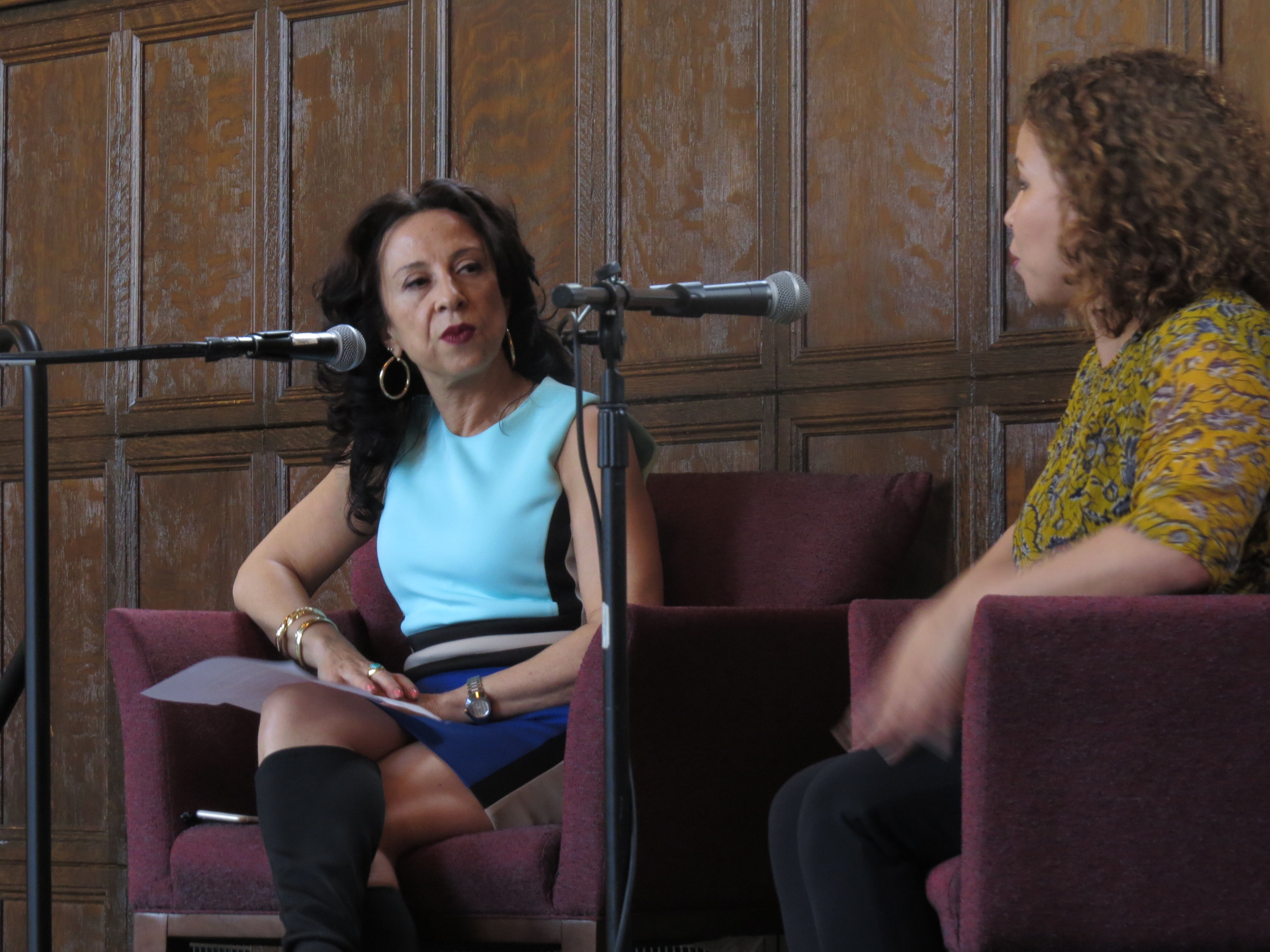 It’s 2 p.m. on a Wednesday in New York City. DePaul University professor and journalist Maria  Hinojosa finishes taping her NPR podcast “Latino USA” and immediately jumps into a cab to LaGuardia Airport. As she shuffles through security, TSA attendants wave and smile, acknowledging her by name as she zips through the line.

Arriving at Chicago’s O’Hare airport around 7 p.m., Hinojosa takes the Blue line across the city to her hometown neighborhood of Hyde Park. It’s off to bed around 9:30  — she’ll be up at 5 a.m. the next morning. Then it’s meditation, coffee and a workout, all done before leaving at 7 a.m. to reach DePaul’s Lincoln Park campus to teach her 8 a.m. class.

Once class is over, she’s talking with students during her office hours. Then lunch with her son, a student at DePaul. Another class, depending on the quarter, then back to O’Hare  — usually running with shoes in-hand to catch her flight back to New York. It’s a 24-hour visit for roughly six hours of classroom time.

Then the next week, she does it all over again.

“Everything is cool about it except for the airplanes,” Hinojosa said, rolling her eyes. “It’s a small price to pay to have access to this campus and to the students.”

Hinojosa might be one of DePaul’s best kept secrets. Tucked away in a windowless office on the fifth floor of the SAC building, she is the Sor Juana Inés de la Cruz chair of the Latin American and Latino Studies department. Along with teaching two or three classes across the winter and spring quarters at DePaul, Hinojosa might best be known for her journalistic endeavors  — a previous guest for NBC’s “Meet the Press,” anchor of NPR’s “Latino USA,” an anchor for PBS’ “Frontline” — helping to pave the way for greater Latinx representation in mainstream news media.

Hinojosa moved with her family from Mexico City, Mexico, to Chicago’s Hyde Park neighborhood when she was just a toddler in 1962. Growing up, she recalls the importance of media within her household, from her father’s Time magazine subscription to family viewings of NBC’s “Meet the Press” and, her personal favorite, “CBS Sunday Mornings.” Even watching the news at a young age, though, Hinojosa noticed a pattern.

Most anchors and correspondents were white. And all broadcasts were in English.

“We never saw ourselves there,” Hinojosa said. “I never thought I could be a journalist in my life.”

Despite this initial disconnect, Hinojosa’s interest in journalism continued to grow. She got involved with her school’s radio station while attending Barnard College in New York, hosting a Latinx-focused radio show. Yet there was still the nagging belief that she wasn’t good enough  — or smart enough  — to be an American reporter.

It took a persistent career counselor and an internship with NPR to solidify Hinojosa’s passion for journalism. After graduating from Barnard and completing the internship, Hinojosa was a freelance journalist by day, waiter by night. She was invited back to NPR for a full-time position in August 1985, where she went on to launch the podcast “Latino USA” in 1992, the longest running Latino-focused news program in U.S. public media. 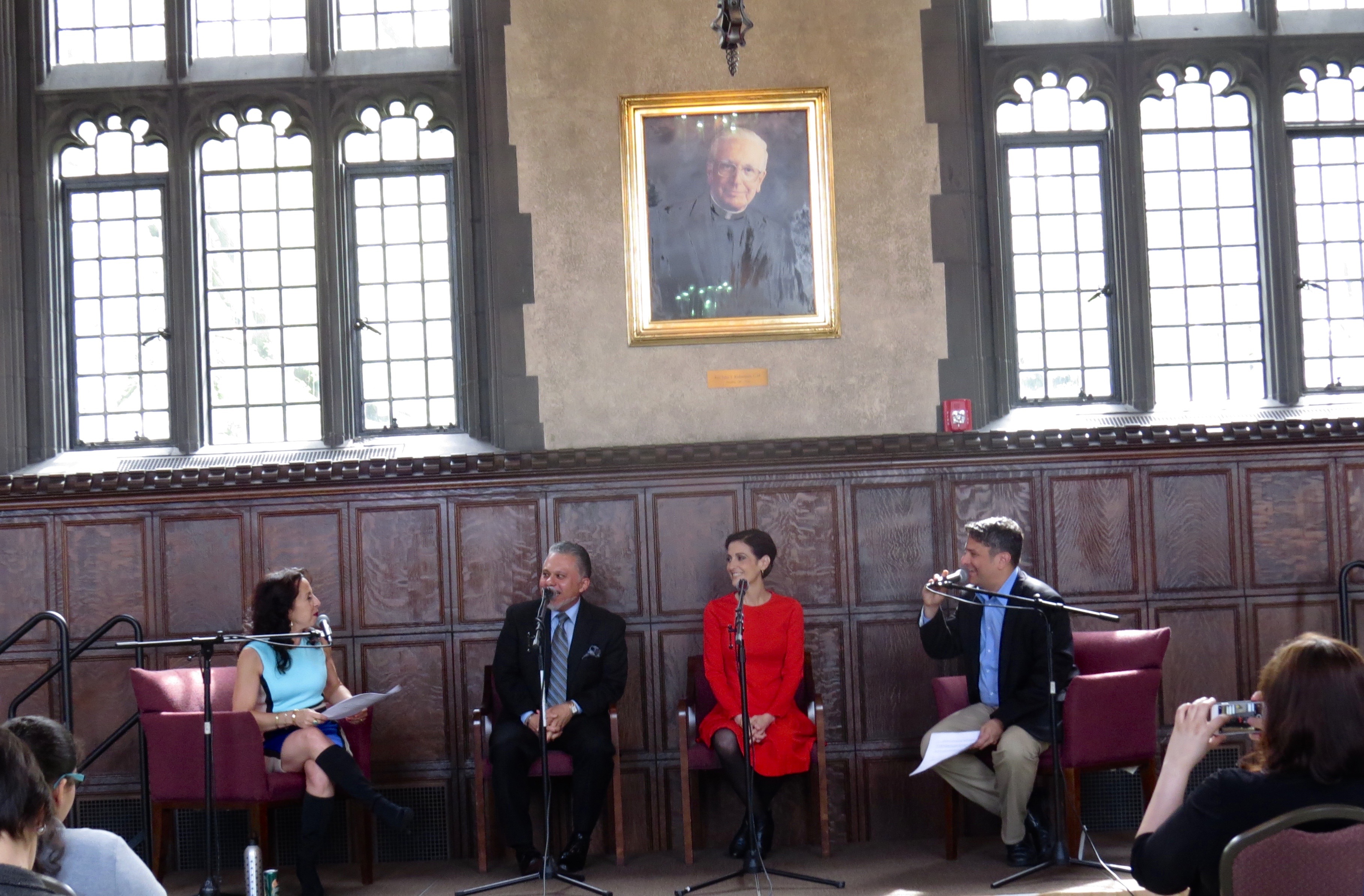 Along with 25 years hosting and producing “Latino USA,” Hinojosa has also reported for major networks such as CBS, PBS and CNN. Still, she  said she grew  tired of general assignment reporting and longed for a senior investigative reporting position. Her aspirations were met with apprehension, and she was told to wait until those already holding the titles  — a line of white, male reporters  — vacated their positions.

“They actually said, ‘Well, you’re really great but maybe you should wait until like one of these old white men gets sick or dies. Is that ok?'” Hinojosa said. “I remember getting home and just being sickened by the fact that it was a joke or that I should have to wait.”

She desired diversity, independence. Uninterested in waiting around, Hinojosa decided to create her own production company, the non-profit journalism company Futuro Media Group.

Starting a non-profit required space, staff and a hefty amount of funding. Hinojosa chose to base the company in New York City’s Harlem neighborhood for its diversity and similarity to her hometown neighborhood Hyde Park. She chose her staff carefully, based on the type of reporters she desired. For funding, she pitched the idea to fellow Barnard College graduate, philanthropist Fiona Druckenmiller.

In 2010, Futuro Media Group was formed to provide ethical, in-depth coverage from a POC (person of color) perspective to show the diversity of the American experience.

“Whenever it would get tough, I would just think: we cannot let this thing disappear because so many people count on it,” Hinojosa said. “I guess it’s like the best kind of journalism when people feel they need it to survive.”

Now seven years later, Futuro Media Group produces news programs such as “Latino USA,” “In the Thick,” “America by the Numbers” and “Humanizing America.” In May 2017, Futuro received the Robert F. Kennedy Award in Human Rights for Radio. The media group is also in conversation with PBS for a potential primetime television series, covering diversity in America’s heartland.

Along with Futuro’s accomplishments, Hinojosa herself has received numerous awards, including four Emmy Awards, two Robert F. Kennedy awards, the John Chancellor Award and the Rubén Salazar Lifetime Achievement Award, named after the Mexican-American journalist. Hinojosa has also been named one of the 100 Most Influential Hispanics by Hispanic Business  — three separate times since 1995.

So why DePaul? Why choose a private Catholic university all the way in Chicago? And why the Latin American and Latino Studies department instead of journalism? For Hinojosa, who was also a Latin American studies major, the job offers an invaluable resource: the ability to speak with young students who continue to undergo the same struggles she faced growing up Latino in America. 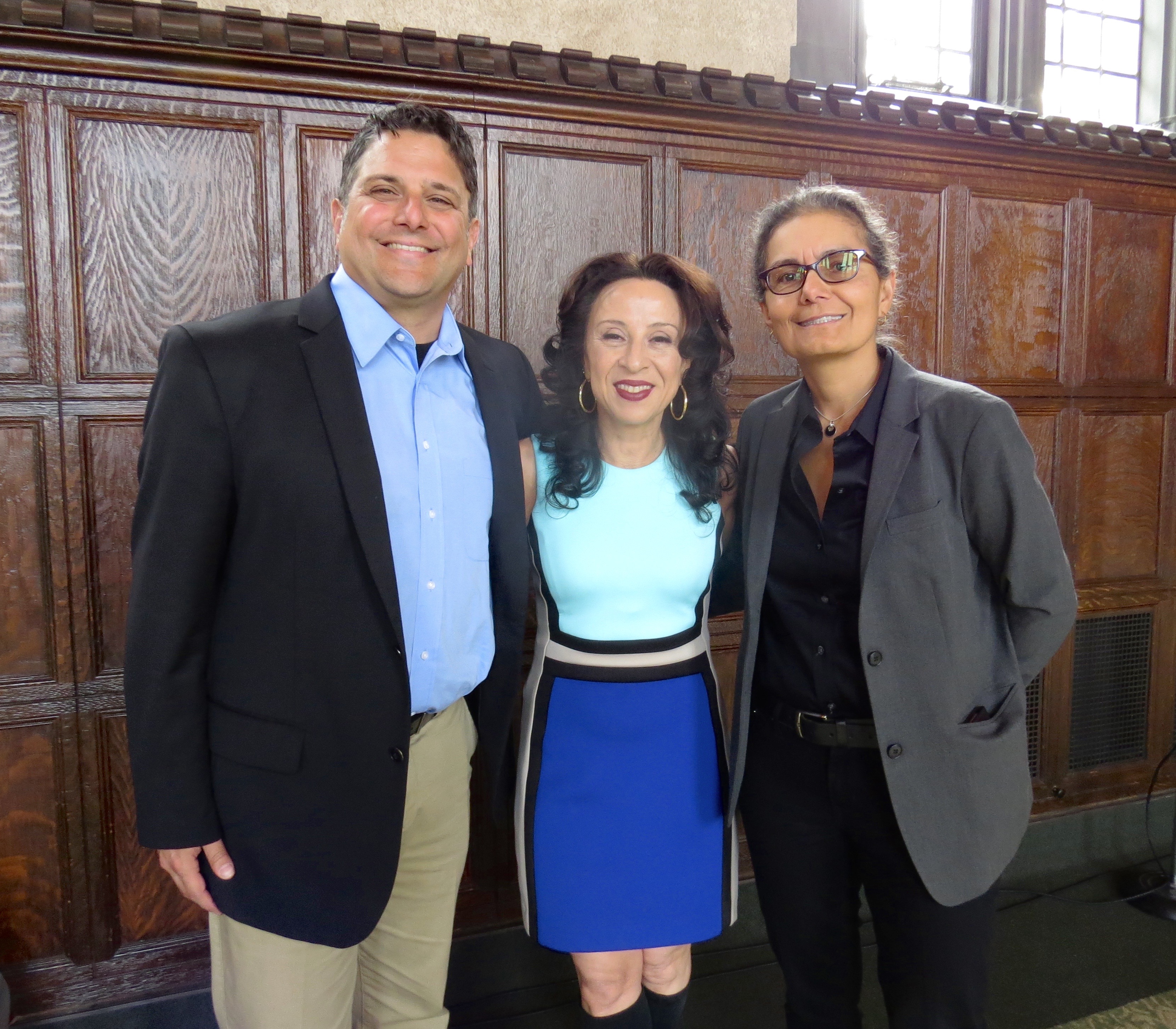 “To be honest with you, sometimes it gets really frustrating and frankly a little boring to be telling the same story at this point in my career,” Hinojosa said. “When I see my students with all of the challenges they face  — most of my students are first generation, most of them are working-class families, most of them live at home, which means that they are commuting and have a whole other job that they are doing at home, like taking care of their brother, sister, abuelita, lo que sea  — they still show up and they give all of themselves.”

Hinojosa’s classes typically focus on Latinx representation in media, combining politics, news and personal experience. Last spring quarter, though, Hinojosa taught a Latino/as mental health and depression class, opening her classroom up as a storytelling safe space for students to break the silence surrounding emotional and mental health. According a 2001 report from the Surgeon General, only 20 percent of Latinos suffering from mental health conditions seek treatment.

At the start of each of her classes, Hinojosa approaches the board and writes “illegal” in large letters. She then swiftly circles the word and slashes a thick black line through it. In her classrooms, there is no such thing as “illegal” or “minority.” The words don’t exist to Hinojosa; they’re banned. Human beings can’t be illegal — they can be undocumented — and no human is inferior to another.

“I try to spend a lot of my time empowering them so that they walk out of this campus owning their absolute power politically, mentally, psychologically,” said Hinojosa.

Empowerment is at the core of Hinojosa’s work, whether in the classroom or behind the news desk. She’s interviewed Latina figures such as Supreme Court Justice Sonia Sotomayor and Michelle Bachelet, the first woman president of Chile, but her favorite experiences remain empowering the “saddest, most forgotten people.” For Hinojosa, those are the stories that matter.

“I hope in the reporting that I’m actually reflecting back to people, ‘Your stories matter, your narratives matter, your opinions matter, your voice matters,” Hinojosa said. “Act as if it matters. Own the power that you have because it does matter.’”