The Secret Life of a ‘Bad Girl’

The Secret Life of a ‘Bad Girl’ 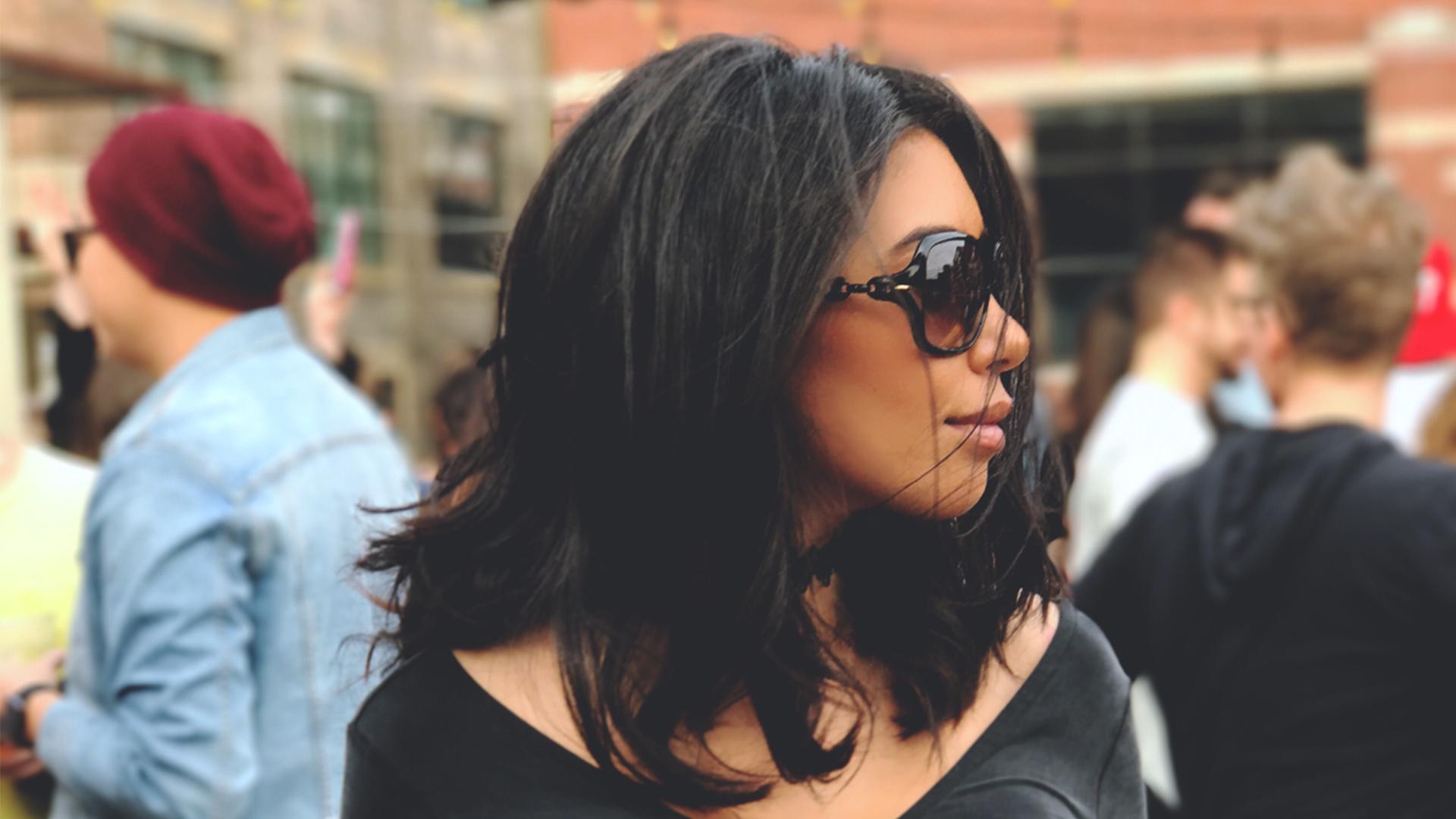 The sounds of nature take over the droning of airplane engines above the Catherine Chevalier Woods, not far from the O’Hare airport. Rima Mellal gets up from the chair she often sits on in the middle of the field to read a book and look at the deer gracefully walking through nature at a spot near her home by the airport.

“This is where I can go and be myself, away from all the people and the crazy lifestyle,” Rima said. “I need this to keep myself sane.”

As Max and I set up for our interview Rima sips on her Starbucks, anxiously waiting for her interview to begin. Max begins a casual conversation as she asks if the interview has begun.

“I’m nervous,” she says. “I’m comfortable in front of a camera but I have never let the world see this side of me. I never brought anyone here other than my son Ish.”

Rima is known for being on Oxygen’s season nine “Bad Girls Club.” (BGC). The show brings in seven girls from across the nation and places them in a mansion at a luxurious location. During Rima’s season she got to go to Cabo, Mexico. They wait until the very end of the interviewing process to tell you this information, according to Rima.

“I was so excited when they told me it would be in Mexico, I just couldn’t believe it,” she says. “I was ready.”

The show’s concept sparked controversy;  a diverse group of girls whose personalities clashed are put in a house for a couple months to see who could withstand the torment of one another. The girls who make it until the end are considered to be the “baddest b****.”

Although it may be called “reality” TV, the reality of it is that it’s not always what it may appear to be. Rima is known for being one of the baddest bad girls from Oxygen’s season nine Bad Girls Club, but what people don’t know is there is a whole other side to her that the show did not capture.

“Imagine having all the mistakes you’ve made being documented for everyone to see,” Rima says. “Even after you grow up they still think that is who you are, that is what I constantly have to deal with.”

Rima has made a few TV appearances throughout her career, including, VH1’s “Black Ink Crew: Chicago,” Fox’s “Empire” and seasons nine and 13 of BGC. On these shows she is portrayed as a party girl or a dancer that gets loud anytime the situation presents itself. According to Rima, this image of herself has left a permanent mark on her reputation in real life, a lasting one that affects young girls that look up to her as that “bad girl.”

“I was invited to a high school to give a motivational speech and spoke about being positive,” she continued. “Those girls were not having it. All they talked about was beating people up and how to be the baddest girl and I was like wow, OK… there’s more to life and these girls don’t know that a lot of that is instigated by the shows’ producers.”

The process of reality TV begins with auditions to get a feel of the potential contestants and producers. They flew each girl out to L.A. to go through a psychological analysis in the last steps of being cast for the show.

“I remember in the casting interview they told me not to cry and to talk about what makes me bad,” Rima said. “I cried anyway, but they didn’t show that. They wanted me to act like I was having fun, wanted me to dance and talk about girls and guys at the club.”

Although the show is not scripted, they do edit footage to help build suspense or drama to the plot of an episode. The girls are unaware of how these reactions are being edited.

Although Rima was always true to herself, she had to be a bit more entertaining in order to give producers a show that they wanted.

“I don’t regret it, but it didn’t portray the person I am 100 percent,” Rima said. “They wanted me to escalate my extraverted personality so they could have an entertaining show.”

I asked what she did before getting caught up in the world of reality TV. Rima pauses as she takes a moment to sip her coffee, she sighs and stares at the distance as her shades cover the tears streaming down her face.

As she continued to explain her story she became more emotional, especially when referring to her family. Her family arrived in the United States from Algeria on June 1, 1994. Rima, her brother and parents stayed at a motel for a couple of days, then moved around the Chicago area each month until they finally settled on Hermitage Avenue in Lakeview when she was around 11 years old. At 17, Rima got pregnant with her son. Coming from a strict Muslim-Algerian household, this further strained the relationship she had with her mother.

“My parents were strict, especially my mom,” Rima said. “She still is. I wasn’t allowed to do a lot when I was growing up which made me rebel when I got older.”

Rima describes her relationship with her mom as distant. Although she loves her mother very much, their personalities are pretty different. She describes her brother having a very similar personality to her mother’s, so they aren’t as close as she would like them to be, although she is extremely protective over him.

Rima shared that she was never too involved with the Algerian community here in Chicago because she always felt judged and restricted by the adamant rules. She felt they kept her from being herself.

“The girls never really liked me,” she said. “I had two friends at my Islamic school and that’s it. I didn’t talk to anyone else so I started hanging out with different groups of people.”

When I ask about how her mother felt about her being on such contentious show, she pauses for a moment and says: “She has no idea that I’m all over social media or that I was on BGC. I think my family members from back home even know and are too scared to tell her because she is just so strict, but to this day my mom has no idea I was on the show.”

As Max and I attempt to understand where this “bad girl” comes from, she begins explaining how much love she has for Algeria and how happy she was to have recently gone on a trip with her son Ish. As she cries she explains how much she misses her home and how glad she is to have shared that part of herself with her son.

“I was pregnant with Ish at 17 and my parents wanted me to get an abortion… I just couldn’t. He is my world. I can’t imagine not having him be part of my life,” she said. “That was one of the darkest moments of my life.”

During her pregnancy Rima attended high school at Lydia Urban Academy and formed a tight bond with her algebra teacher Ellen William-Nelson. The tension at home became too much and she eventually moved in with Ellen. This resulted in conflicts with the school that insisted she move out of her teacher’s home immediately.

“The school had a problem with me living with my algebra teacher,” Rima says. “It was a Christian school and I had no one else’s support so I had to move back home. Ellen left the school and I did eventually, too. She was the only reason I wanted to be there.”

At the end of the year Rima had Ish. She worked at multiple retail stores before one of her friends called her up one day and told her she had signed her up to be on BGC. This ultimately made her into a social media icon once the show aired.

“I post only what I want to show people on my social media,” she says. “I always get comments on how I’m a bad mom but I don’t have anything to prove to anyone but myself and my son that’s all that matters.”

During the off seasons of wrapping up BGC and going on the reunion show, many BGC fans started realizing a change in Rima’s appearance and criticized her for getting surgery on her jaw due to an incident and losing so much weight.

“During that time I wasn’t eating because of the medicine I was taking due to my surgery,” Rima said. “Everyone assumed I had plastic surgery but the truth is that I got into a really bad altercation with an ex of mine… He hurt my jaw pretty bad and I had it wired shut. No one knows about that.”

The criticism people face when they put themselves on the forefront of television is terrifying and filterless. It’s almost tempting to answer every negative comment that is put out there. With over 243,000 followers on Instagram and over 110,000 on Twitter, Rima is constantly being watched and judged for the image of herself she sets out there.

“I have never let anyone in — like you guys are great, I feel so comfortable talking to you and crying to you,” she laughs.

“I just want to make a good life for me and my son,” Rima said. “I’m not going to post about him because I don’t know who he will be in the future and if he would want that. Until he is old enough I’m going to keep him to myself and everyone can think whatever they want.”

Correction: An earlier version of the story included a quote describing the girls of Bad Girls Club being told to make “weird faces” at the camera is incorrect. The quote has since been omitted.

An earlier version also declared that the girls were directed “to make faces at the camera to help build suspense or drama.” The paragraph has since been corrected.