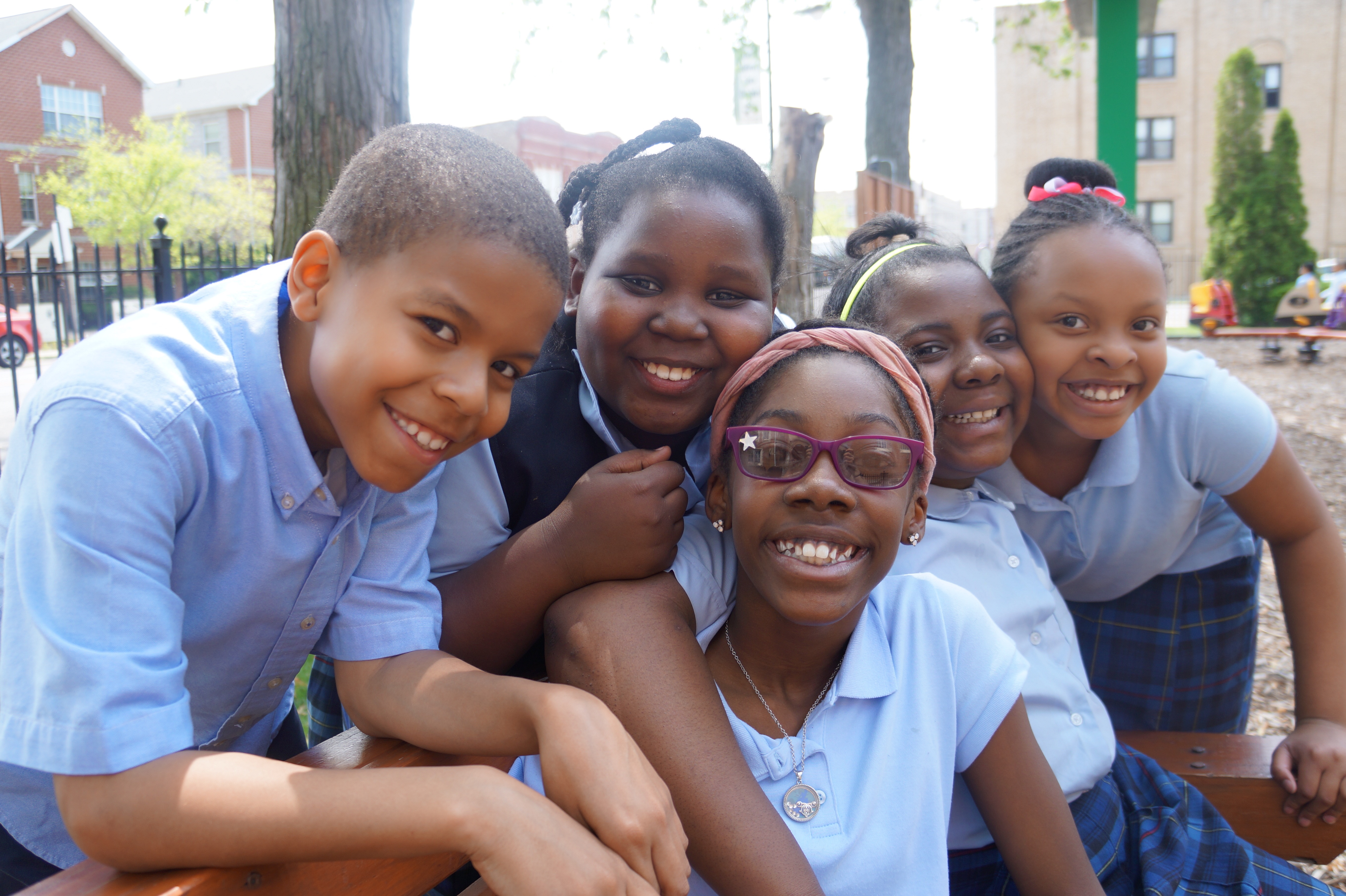 She sat, fiddling on her phone, not bothering to look up as the doors of the train opened to invite in new passengers. This wasn’t her stop. She knew this wasn’t her stop. Katy Bozich has been making the hour long commute from Lakeview to Auburn Gresham for almost a year now. She’ll know when it’s her stop.

A sophomore at DePaul University, Bozich takes the Red Line toward 95th every Tuesday and Thursday to work at St. Sabina Academy. The school, located off 79th Street, is a private Catholic institution that serves students from preschool through eighth grade. 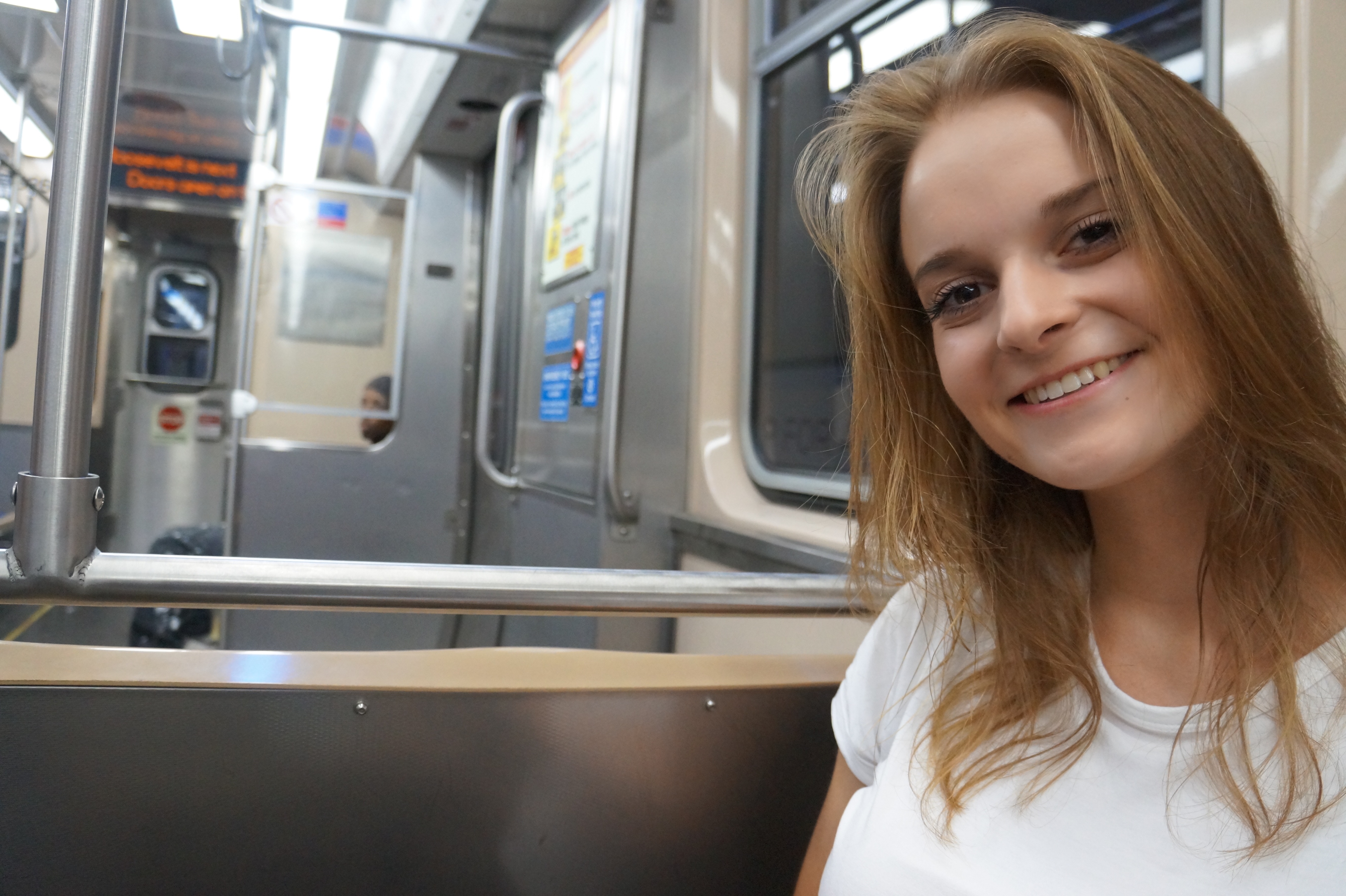 Bozich found her way to St. Sabina Academy through the Irwin W. Steans Center at DePaul. A university founded on the Vincentian value of serving others, DePaul offers programs that employ students as tutors to low-income schools in Chicago through the Steans Center.

Bozich’s official title at St. Sabina is tutor. But her true role, and she argues her most important, is companion. Bozich falls under the supervision of Rose Akuamoah, an elementary education teacher and current doctoral student at DePaul University. Akuamoah oversees the installment of tutors at St. Sabina Academy. Moving from classroom to classroom throughout the day, Bozich assists students in the fourth and eighth grades.

“The children feel comfortable with the tutoring process. They work collaboratively and cooperatively with the tutors,” Akuamoah said. “And the program [from DePaul] is doing a great job addressing the issues in low-income areas where the students are at a disadvantage.”

Reported by the Chicago Tribune, nearly 24.5 percent of the population in Auburn Gresham were living under the poverty level in 2010 and 19.5 percent did not graduate from high school, drawing the correlation between money and education. In an area where poverty is prevalent, the resources necessary to graduate from grade school are hard to come by as a result of lack of money, especially in schools like St. Sabina that relies on tuition from residents. The community is also ranked 14th in highest violent crime rates out of 77 Chicago neighborhoods. Further reported by the Chicago Tribune, the other neighborhoods associated with violent crime on the list, such as Greater Grand Crossing and Englewood, also had high levels of poverty and low graduation rates. 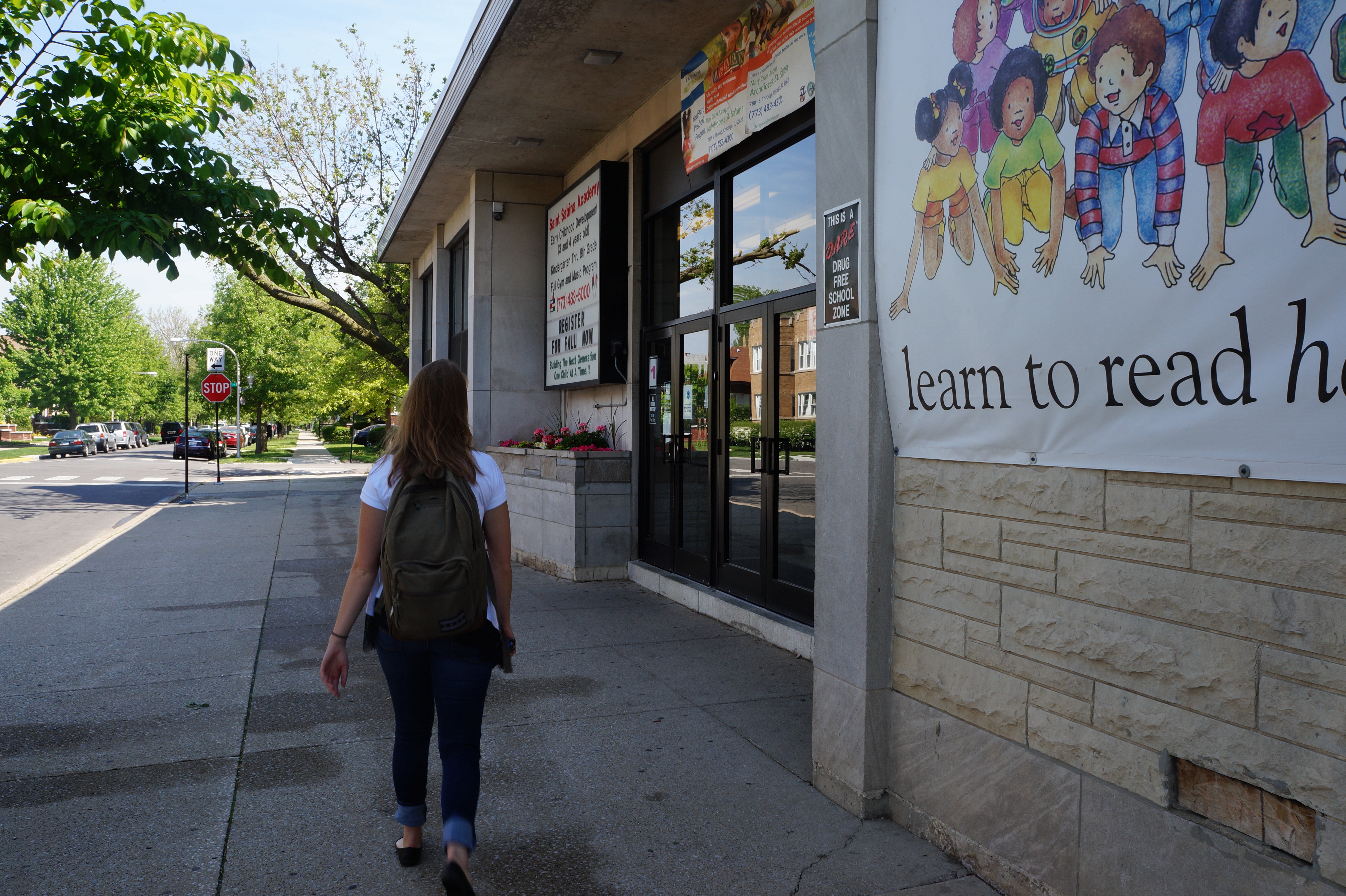 St. Sabina Academy is located in the Auburn Gresham neighborhood off of the 79th Red Line stop. (Kira Latoszewski, 14 East)

Approaching 10 a.m., Bozich rang the bell to gain entry into the school. She was greeted by a few smiles and warm welcomes, making clear that Bozich is a familiar face at St. Sabina. It was even more clear that she felt at home as she made her way to the first classroom of the day.

The building itself resembles a typical elementary school, reminders to “be kind” lining the walls next to announcements about upcoming events. However, one sign stands out. Hanging next to a colorfully coded lunch menu poster, an anti-violence sign reads, “You have no right to take my life.” Startling to a visitor of the neighborhood, it is an integral reminder to those accustomed to the reality of Auburn Gresham. 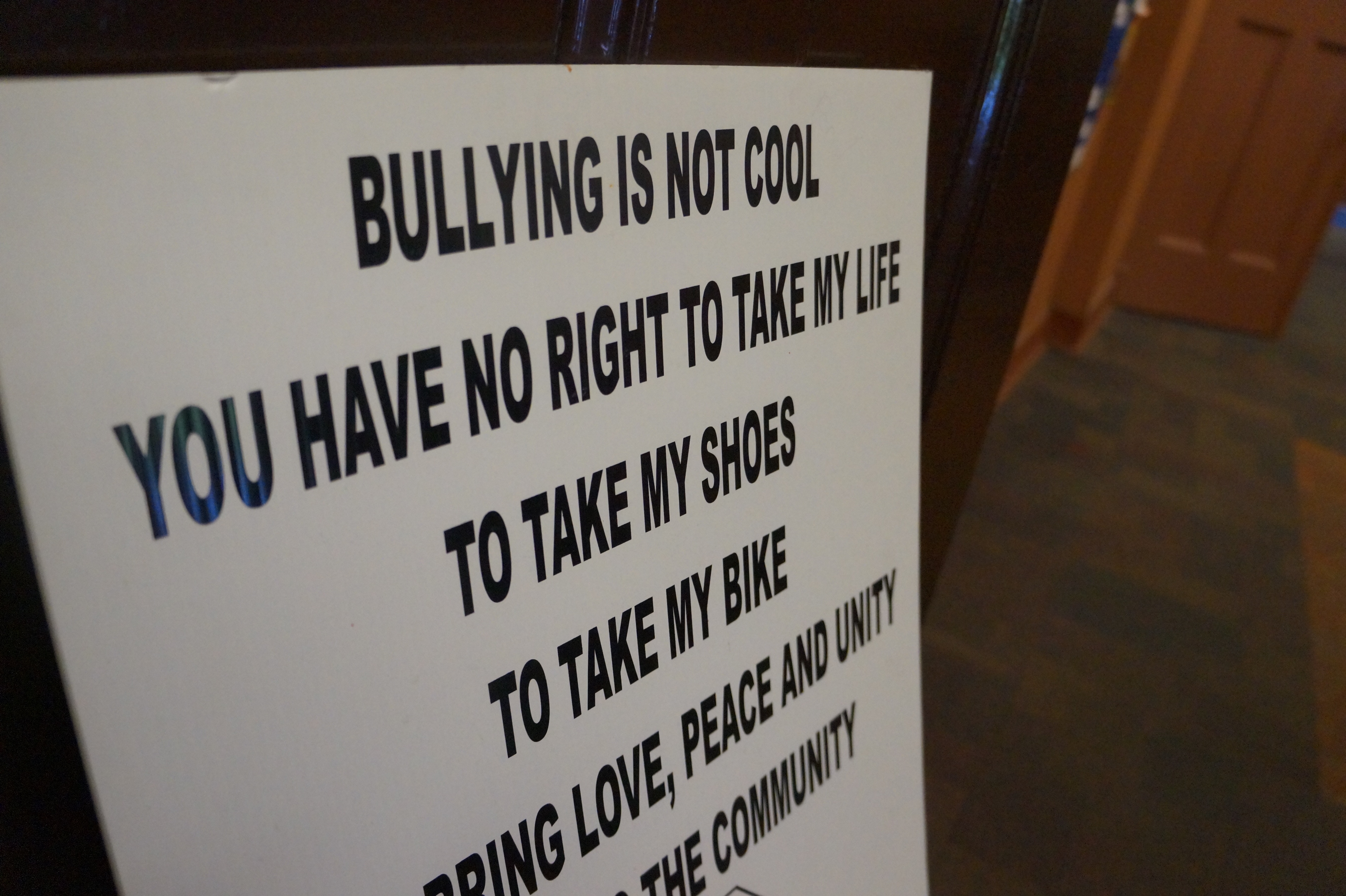 However, Bozich’s comfort and security as a transient to the community is clear as she passes the sign without a glance. Moment later, she stepped into the classroom to find herself immediately in the grasp of children’s arms. Her presence interrupted the ongoing lesson as students scrambled to embrace their favorite tutor. The classroom, erupting with excitement, lost a sense of structure as the teacher (a nun from St. Sabina Church) decided which children would fall under Bozich’s supervision that day. 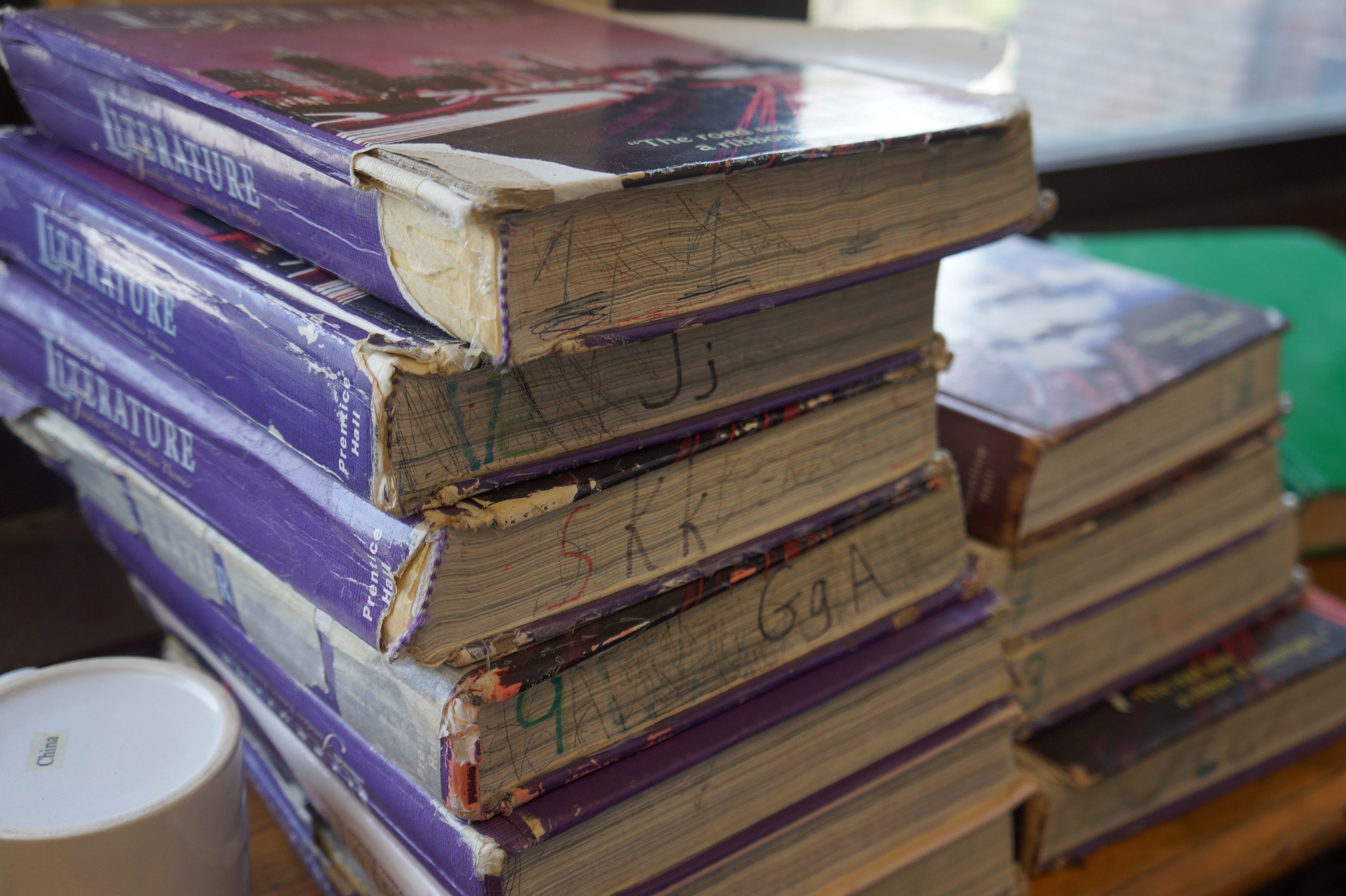 Outdated and battered textbooks that have rental dates from the year 2000 are still used at the school. (Kira Latoszewski, 14 East)

Even at the private academy, a teacher with an education degree is hard to come by. A majority of the students are taught by nuns and church patrons rather than experienced educators, according to Bozich. Even basic necessities such as soap are absent from the school bathrooms, showing a lack of funding.

“When I first started here, I noticed that there wasn’t any soap in the sixth and eighth grade bathrooms. There still isn’t any,” Bozich said.

The school’s science lab consists of an empty room that Bozich often uses for tutoring. No test tubes, beakers or microscopes are found in the lab. This causes the ever-present question of the students’ preparedness for high school to loom in the empty room.

“It’s tricky and it’s a mess,” Bozich said, referring to the school’s curriculum. Bozich’s concern resides in the loosely outlined course objectives matched with outdated and insufficient textbooks. “Their textbooks state that George Bush is the president. How can we expect them to compete with their better-resourced peers if their learning materials are lacking?”

In a landmark study conducted by University of Kansas child psychologists, research showed that children from households on welfare heard and understood 1,550 less words per hour than those from families with professional backgrounds.  This places an importance on the quality of education that they receive outside of the home in order to make up for the insufficiency. However, if the school system also lack resources, then the cycle remains the same. 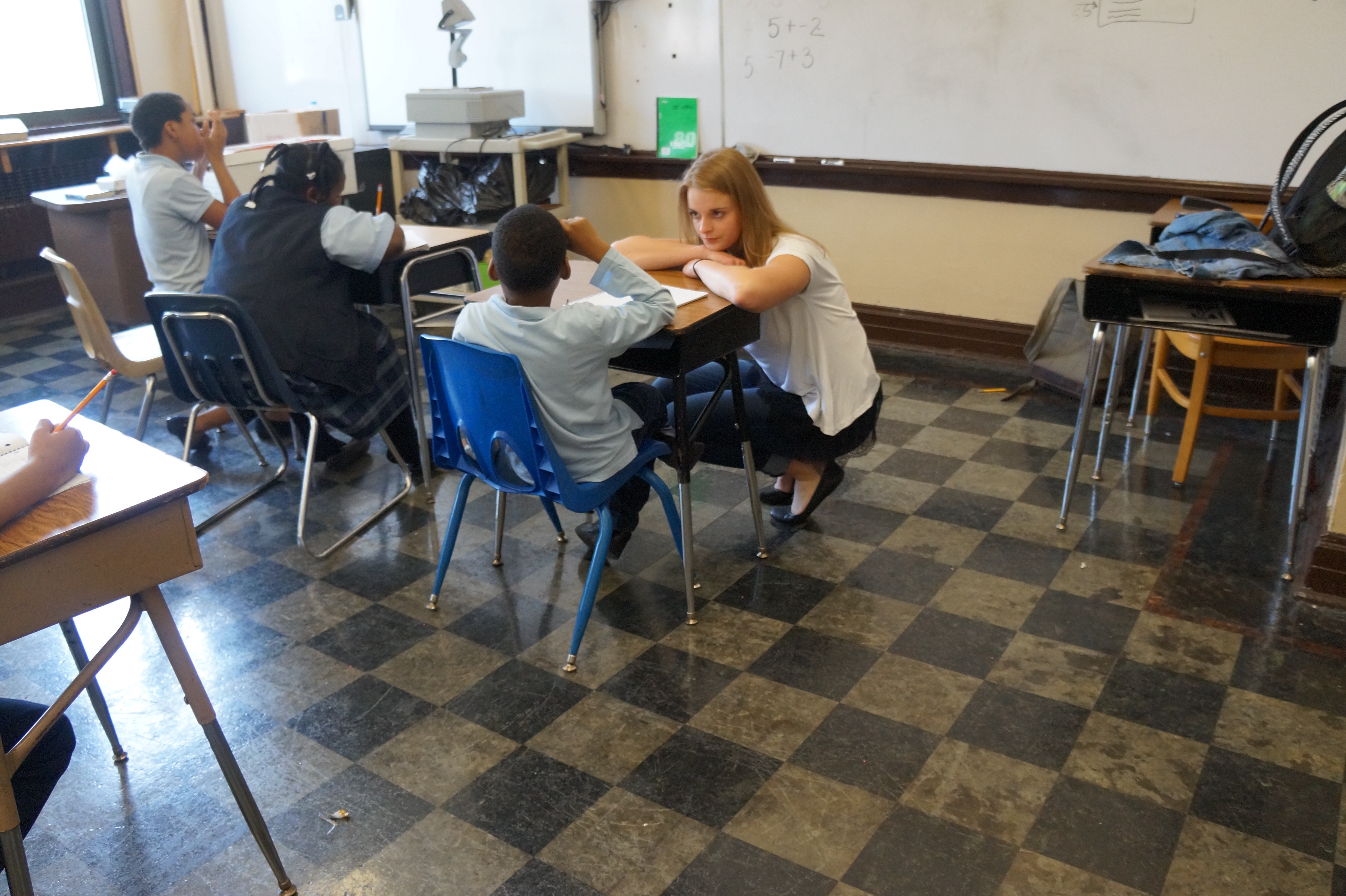 The door swung open continuously as students breezed in and out of Bozich’s tutoring session.

However, the poor construction of curriculum and a lack of resources doesn’t visibly faze the students. When they were asked about their future endeavors, professions from game designer to doctor were shouted.

“I want to be a volleyball player, a soccer player, a tennis player, a doctor, a fashion designer,” said Mariah, a fourth grader at St. Sabina Academy. She smiled and revealed a pair of fake blue vampire teeth. Excitement roared throughout the classroom, making evident the effect that Bozich has on the children. 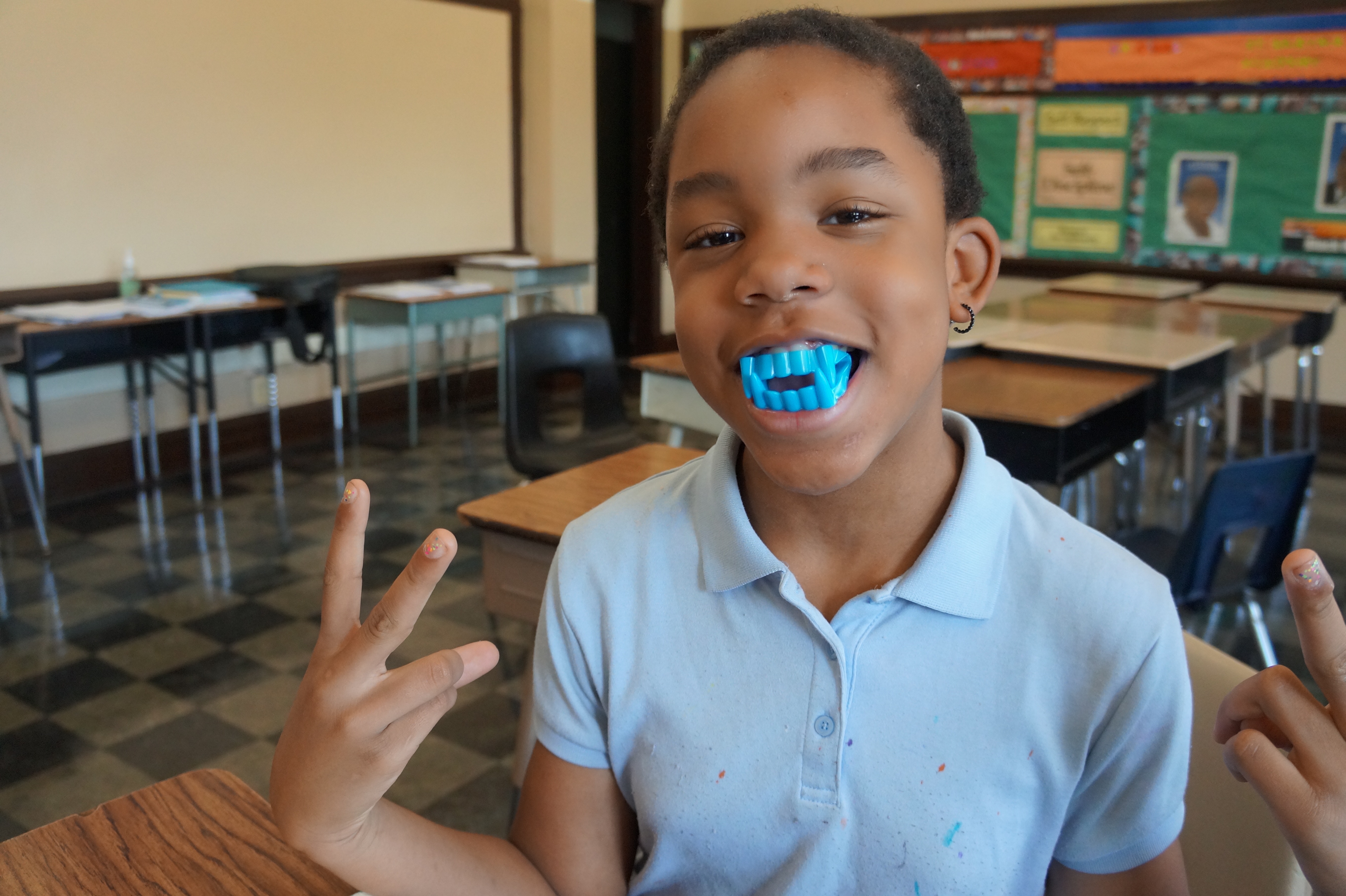 The math problems she put on the board are ones Bozich came up with on her own. There are no guidelines for her position, only the knowledge that she’s accumulated through her own schooling. A pair of twins, Brian and Shaun, excelled at the problems, finishing before the rest of the class. With identical bright eyes, they chattered about a new video game.

“I’m going to get my Ph.D. in game design and computer programing,” said Shaun. His brother chimed in, “Me too!” 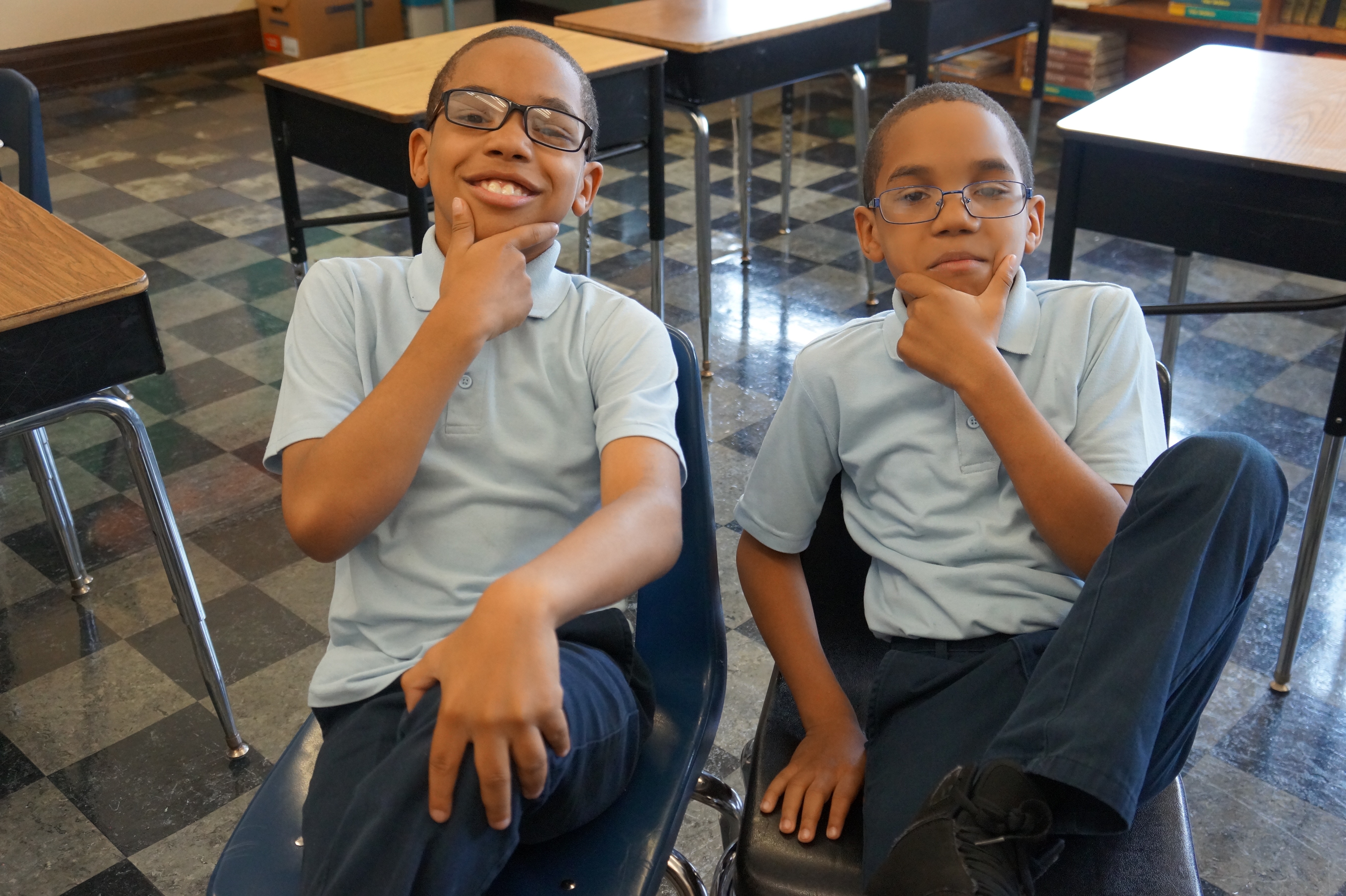 Brian (left) and Shaun take a break from math equations to pose for a picture. (Kira Latoszewski, 14 East)

The students stirred in their seats as the noise in the hallway can only signify one thing: recess. The tutoring session was 20 minutes before the students were granted playtime.

Outside, the playground sat adjacent to Racine Avenue and 78th Street and across the street from The ARK of St. Sabina, a community center. The supervision at recess was minimal, just the eyes of the music teacher and Bozich covering the shady patch of greenery where over 30 students were playing.

Friendly faces from the neighborhood waved hello at the children over the fence that separates the school from the rest of the neighborhood. Across the street, a long line formed outside of the community center.

“Job fair,” Bozich noted, nodding in the direction of The ARK of St. Sabina. “They’re trying to grow the community, bring in a grassroots movement to make it what it use to be.”

Once a predominantly Irish neighborhood, the racial makeup started to shift in the late 1950s as the construction of the Dan Ryan Expressway displaced many black communities. In its early stages, the former primarily-white community of Auburn Gresham welcomed a black middle class. However, the assassination of Martin Luther King Jr. and the resulting political turmoil created unrest within the community and resulted in white flight in the late 1960s. As a result, the community saw a drop in property value and an increase in gang presence. By the 1980s, Auburn Gresham entered a state of poverty that still plagues it today.

However, there remains a sense of safety and community that encapsulates a neighborhood associated with gang violence.

“The difference between Lincoln Park and Auburn Gresham is so different in terms of the community feel,” Bozich said. “People are willing to talk to strangers more. It’s much more of a family. Everyone looks out for each other.”

Watching her students play, it’s clear that Bozich takes pride in the work she does at St. Sabina Academy.

“Leaving them is going to be very hard,” she said, nodding toward the kids.

St. Sabina is a piece of Bozich’s career path and a place she will always hold dear to her heart. Her experience at the school has alerted her to the issues surrounding the education system, such as lack of funding and unbalanced budgets.

“Education is the foundation of everything. If you look at a lot of problems today, you can trace it back to education and how a child is brought up,” she said. “There’s a whole section of Chicago that the education system just ignores. These kids, with all their hopes and dreams, just get forgotten about.”

However, as a private school, St. Sabina Academy fights a whole other monetary demon. The school does not receive funding from the government and instead relies on donations and tuition. That forebodes an issue, as many of the students at St. Sabina receive scholarship money and grants, according to Bozich.

Looking forward, Bozich is hopeful for the students’ educational future in Auburn Gresham. They’re working with what’s been given to them, but Bozich believes there needs to be a shift in the way funding is delegated in order to provide children with better opportunities for the future.

“I know these kids and I know what they’re capable of,” said Bozich. “Now it’s time for them to have the opportunity to show it.”