Even with a year’s worth of time between the two, the 2018 Women’s March began much in the same way as its 2017 counterpart — a ripple of pink weaving down Chicago’s main thoroughfares, bobbing silhouettes of posters in tow, figures clad in the light outerwear of a Midwesterner made to feel invincible by a mild January day.

They came by train, by foot and by car, filing out by the thousands down Michigan Avenue and into the fenced confines of Grant Park. This year’s well-attended Chicago rally, branded as a voting-centric “March to the Polls,” drew 50,000 more marchers  — an estimated 300,000 in total — than the 2017 event. As our reporting team circulated throughout the crowd, we sought to get a sense of why attendees came to march this time around: After a year of tumult, what significance does the Women’s March hold in 2018?

In some regards, the imperative for action is clearer with a year’s worth of reflection. During last year’s rally, held just a day after the inauguration, the nascent Trump administration remained a foreboding but still vague idea, mired in the will-he-or-won’t-he potentiality of a bigoted reality star’s ascension to office. Hundreds of thousands took to the street; pundits made their predictions and Twitter hummed with anticipatory anxiety surrounding the impending four years. The president’s first executive order, signed hours after taking office and designed to lay the groundwork for repealing the Affordable Care Act, sent off an initial round of shockwaves — suddenly, the livelihood of millions hung in near-tangible balance. And so the first march became one of fear and revolution, an act of defiance in the face of uncertainty.

Marchers could only guess at what was to unfold over the next 12 months: the first so-called Muslim travel ban a week later, America’s withdrawal from the Paris agreement five months later, the right-wing terrorists in Charlottesville deemed “very fine people” seven months later. Just as significantly, the maelstrom of the #MeToo movement had yet to reach a national fever pitch — the Harvey Weinsteins and the Matt Lauers roamed their workplaces without scrutiny, free to harass and terrorize generations of women at will.

Given these circumstances, then, it’s fair — if a bit obvious — to call last week’s Women’s March a distinctly post-2017 event. The concerns murmured among the groups of women and allies in the rally’s sophomore run reflected these seismic sociopolitical shifts; they represented a swath of the voting block fed up with legislative threats to reproductive rights, immigrants and the LGBTQ community. Indeed, many of the people 14 East spoke to said this was their first time marching, spurred to action by the manifold indignities suffered at the hands of the Trump administration.

“We’re here to protest everything that’s being going on this year,” said one woman named Aneesa, who preferred to not disclose her last name. She and two friends wielded signs promoting universal health care, but also expressed anger about the sexual abuse revealed through #MeToo. “Even [things that have happened] in the media. You hear about things going on in Hollywood, for instance.”

The march is not without its failings, and organizers and attendees alike came under fire last year for muting the experiences of trans women and women of color in favor of a whiter, middle-class brand of feminism. And although organizers made a concerted effort to promote a variety of voices — featuring speakers like transgender activist Channyn Lynne Parker and a team of disability rights activists, among others — signs in the crowd, many of which relied heavily on iconography of vaginas and ovaries, remained steeped in the same hegemonic norms critiqued at the 2017 march.

Still, some attendees said they noted a positive change — at least on an organizational level — from last year to 2018.

“One of the videos they were playing up there like an hour ago, they just had a bunch of different faces who were running for office,” said Hannah Radeke, a DePaul senior, referencing a clip played at the event’s main stage. “I think that’s super important, because there were people of all different colors, all different orientations, I think that kind of presence is important to show.”

As an election year, 2018 carries a particular sense of urgency. Many women are running as first-time candidates, including Lauren Underwood for 14th District, Anne Stava-Murray for 81st District and Valerie Montgomery for 41st District.

Below, a dozen women and allies share why they marched this year. 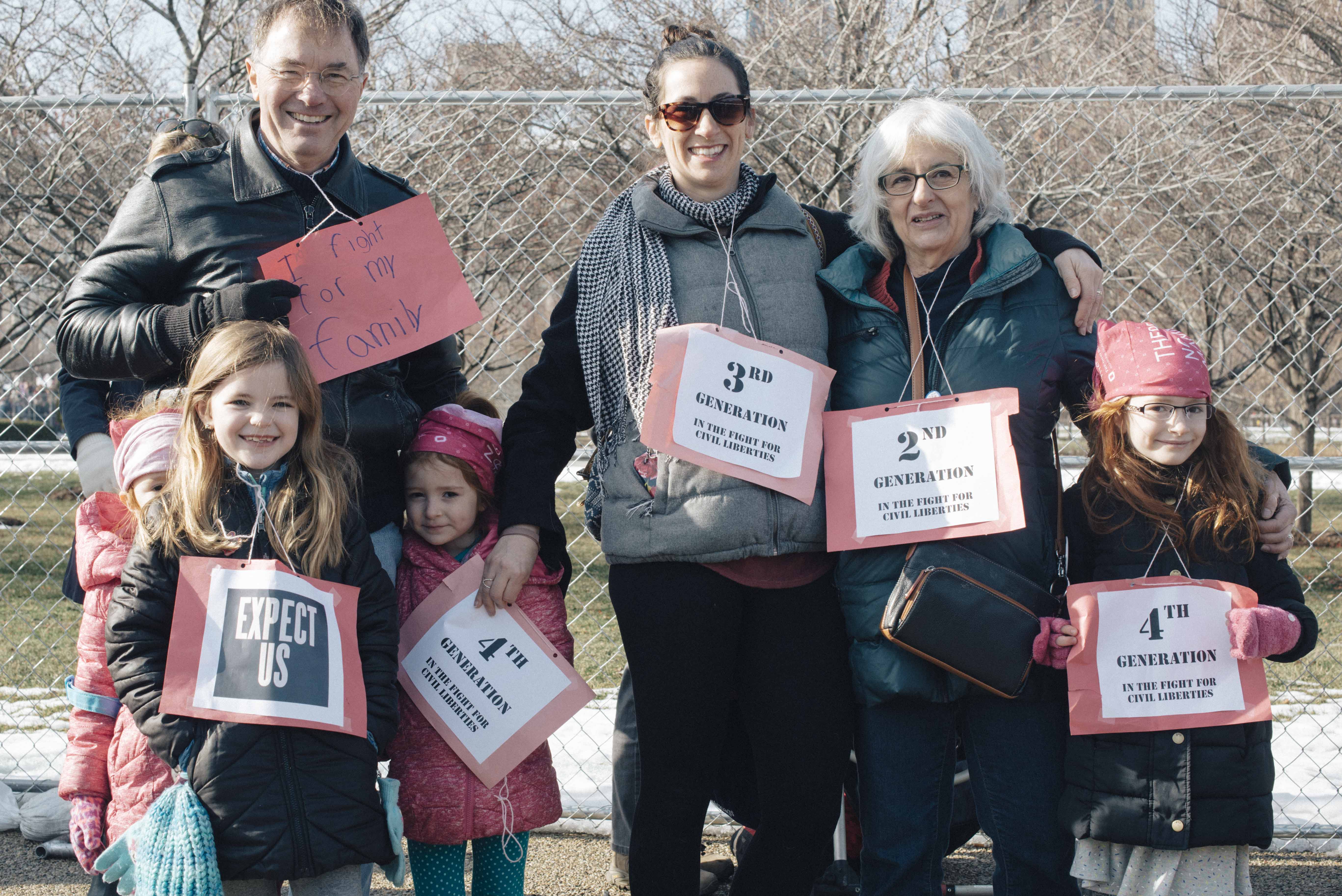 Abby Sullivan (left, 3rd generation), Margaret Mallett (middle, 2nd generation) and Ainsley Sullivan (right, 4th generation): “I’ve always believed in demonstrating for things I believe in. I was marching for integrated schools in 1958, I was marching against the Vietnam War and now I’m here with my daughter and my granddaughters. I’m actually a second generation marcher -- my mother marched too, and now I’ve passed it on to my daughter and granddaughters." (Annie Zidek, 14 East) 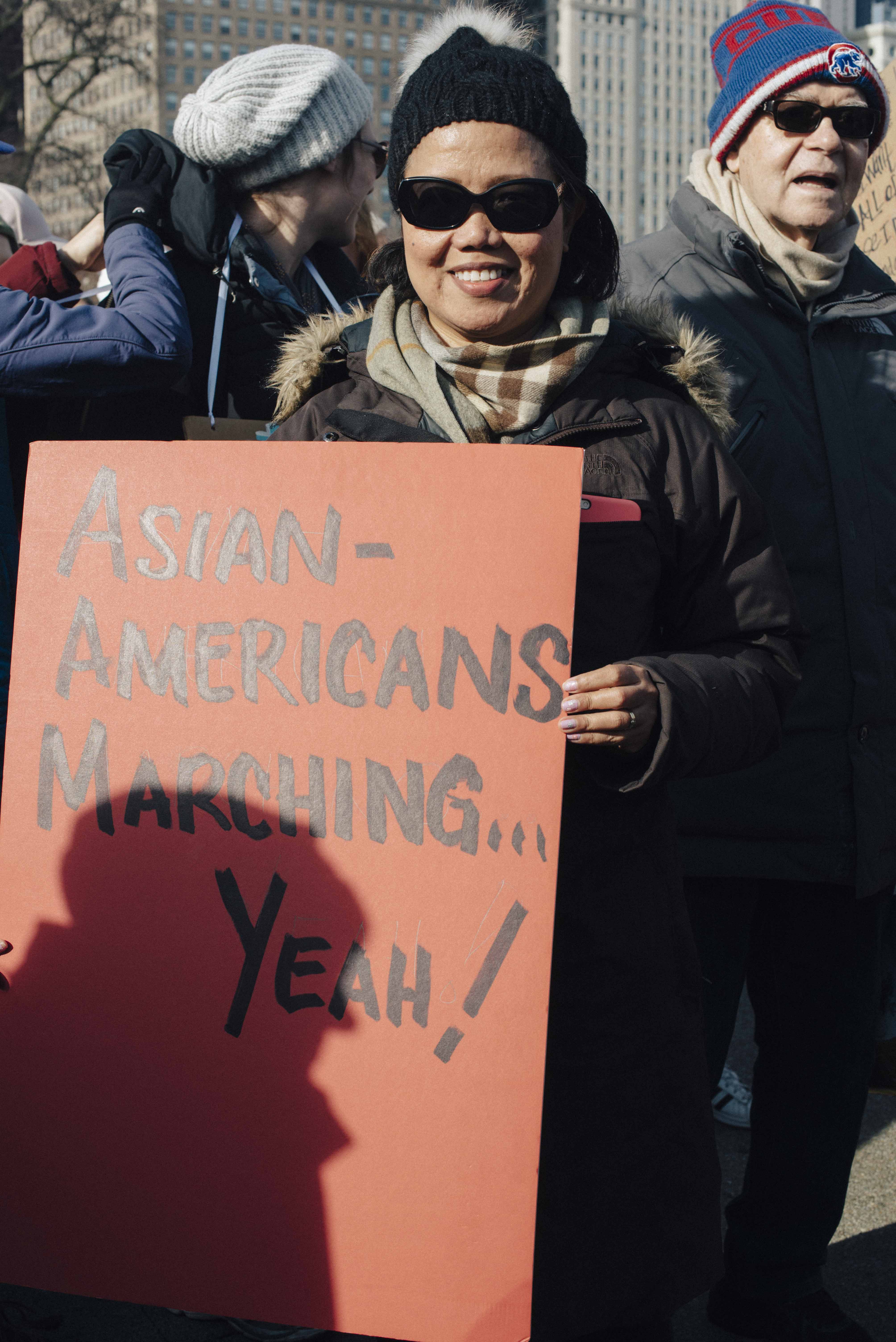 Evelyn Kuner, Chicago resident
“I’m Asian-American. I came here 22 years ago and I support that. I believe in the power of voting and women’s rights. I believe that we can enact change through voting.” (Annie Zidek, 14 East) 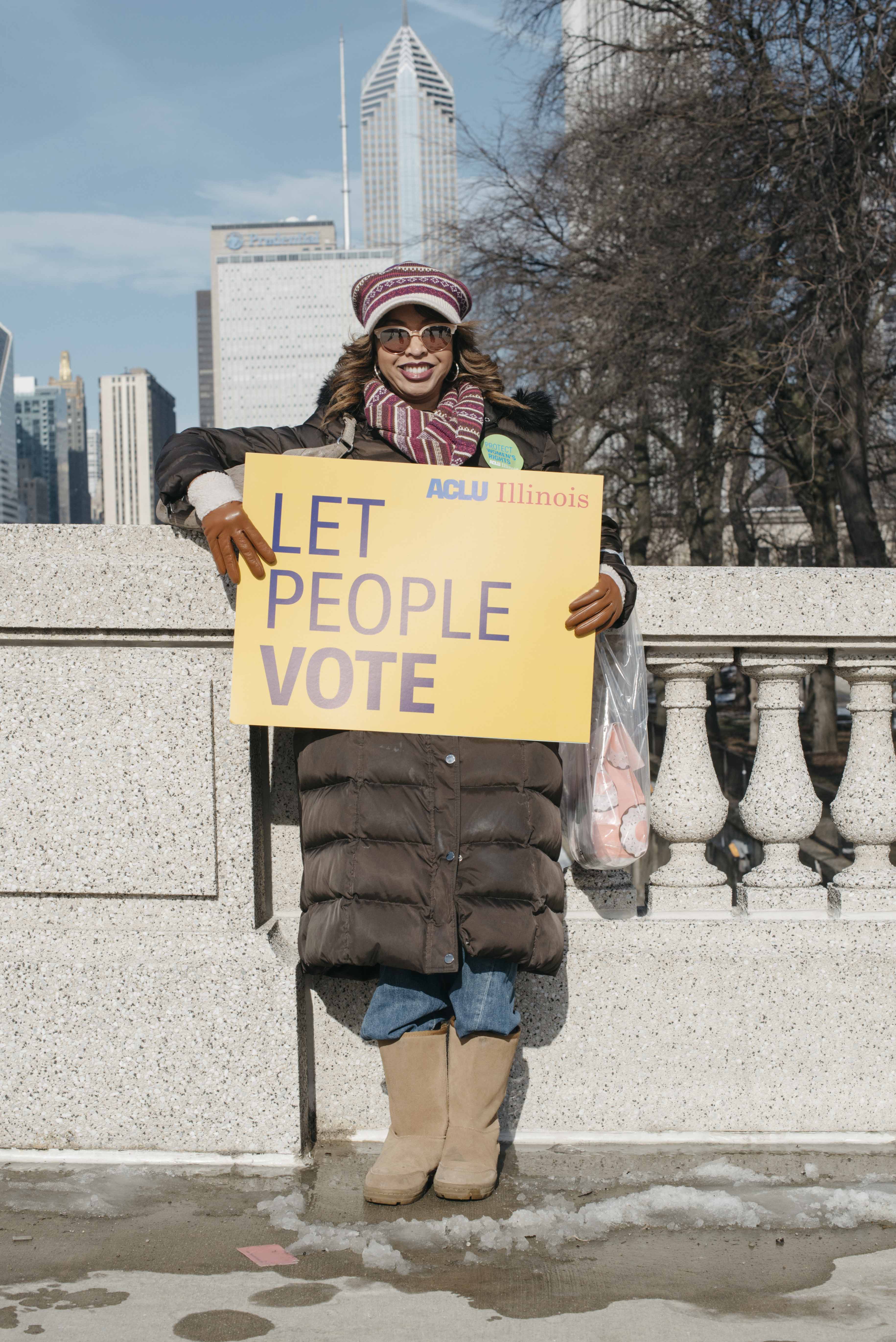 Symone Lewis, ACLU member
“I am a member of the ACLU, and that’s how I found out about the march. I didn’t go last year, but I watched it, and I was like, ‘I should have been there!’ People are here to support women’s rights. But that’s everything -- that’s family, that’s community. We’re women. We bear the children and we raise the children. Issues like equal pay are everyone’s issues. It’s important that we speak up and resist fascism and racism when it’s as blatant as it is. I mean, we should have resisted it in its subtleties, but we need to stop hiding behind it now.” (Annie Zidek, 14 East) 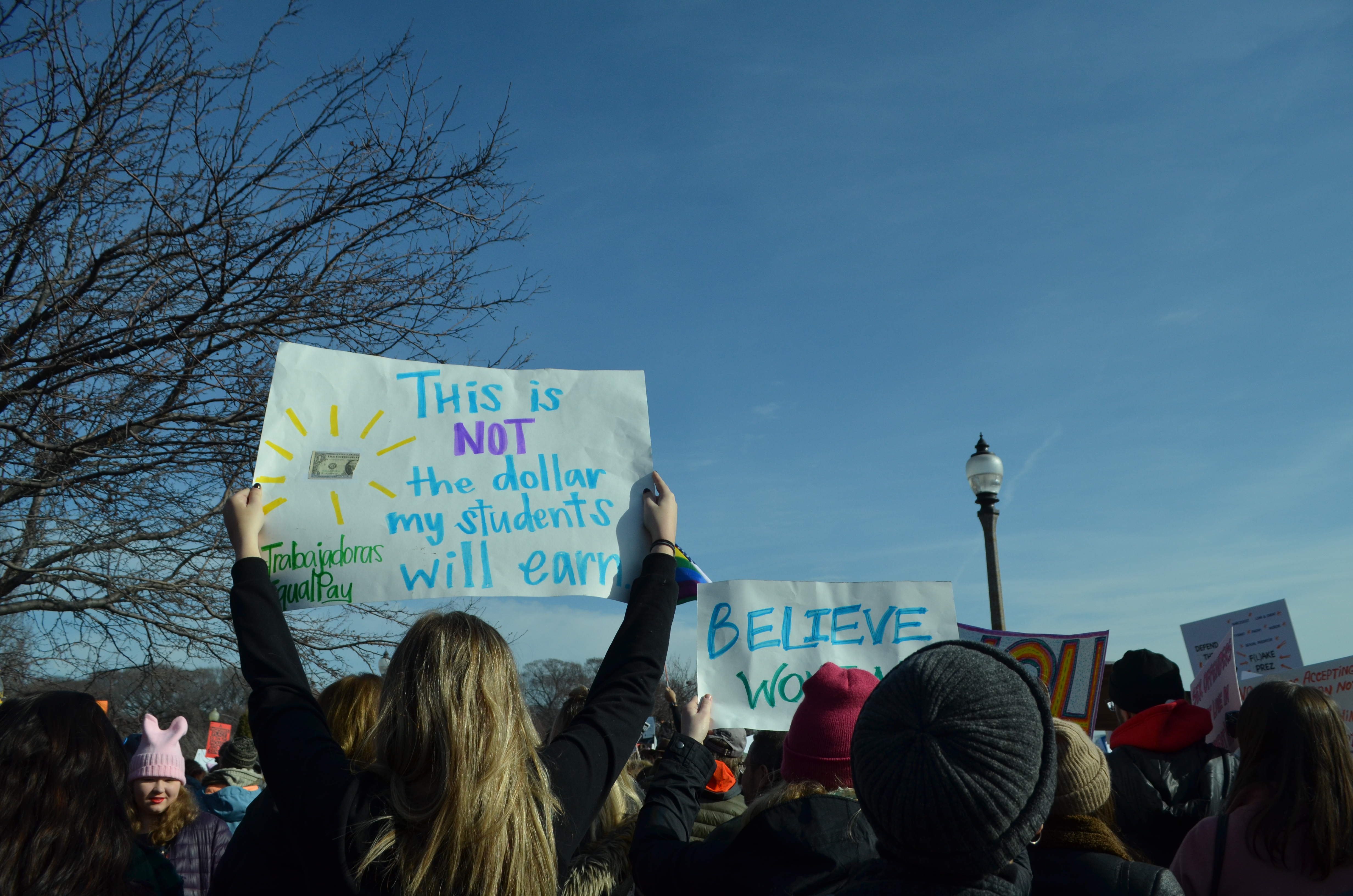 Maureen Cummings, Milwaukee resident
“It says ‘This is Not the Dollar My Students Will Earn.’ I teach on the South Side of Milwaukee, which is a Latina community, a Hispanic community but I have several Latina students. And this is a sign that has 53 percent of the dollar on it. And I am marching for myself, including all the women in my life, and those 6th grade girls who should be able to grow up in a classroom and should be able to learn in a way that when they actually get to working that they should be paid just as much as my brothers would be at the same work.” (Megan Stringer, 14 East) 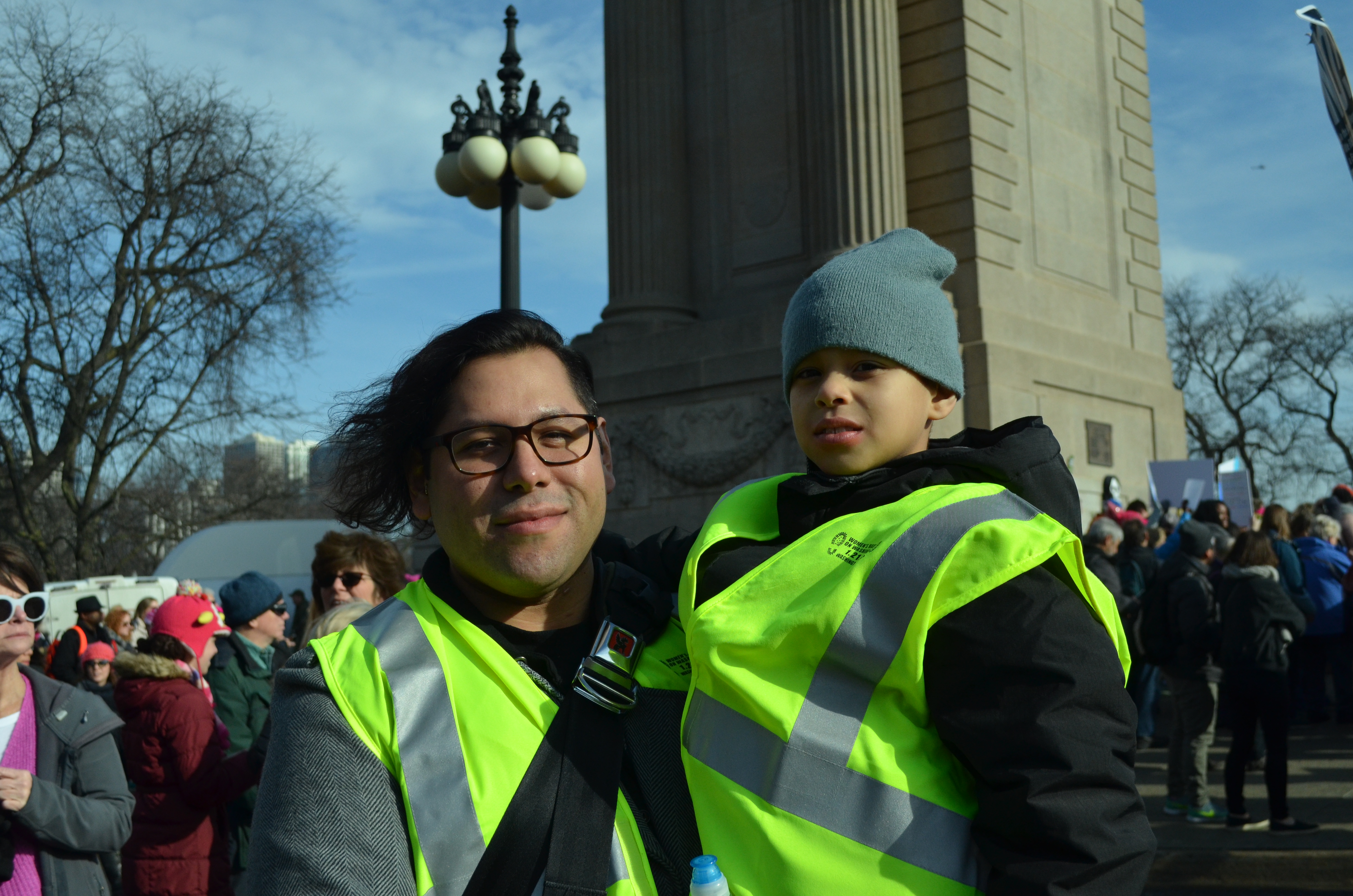 Jerry Salazar and nephew Salvador Vega with Women in Trades
“So I came with Women in Trades, last year we went to DC. So it’s just to show solidarity….I told him about how I experienced last year, the weather, the chants, it was really exciting. And it’d been a year but he said ‘Hey remember you said you were gonna take me.’ So he’s asking a lot of questions. [looks down at him] but he’s tired now.” (Megan Stringer, 14 East) 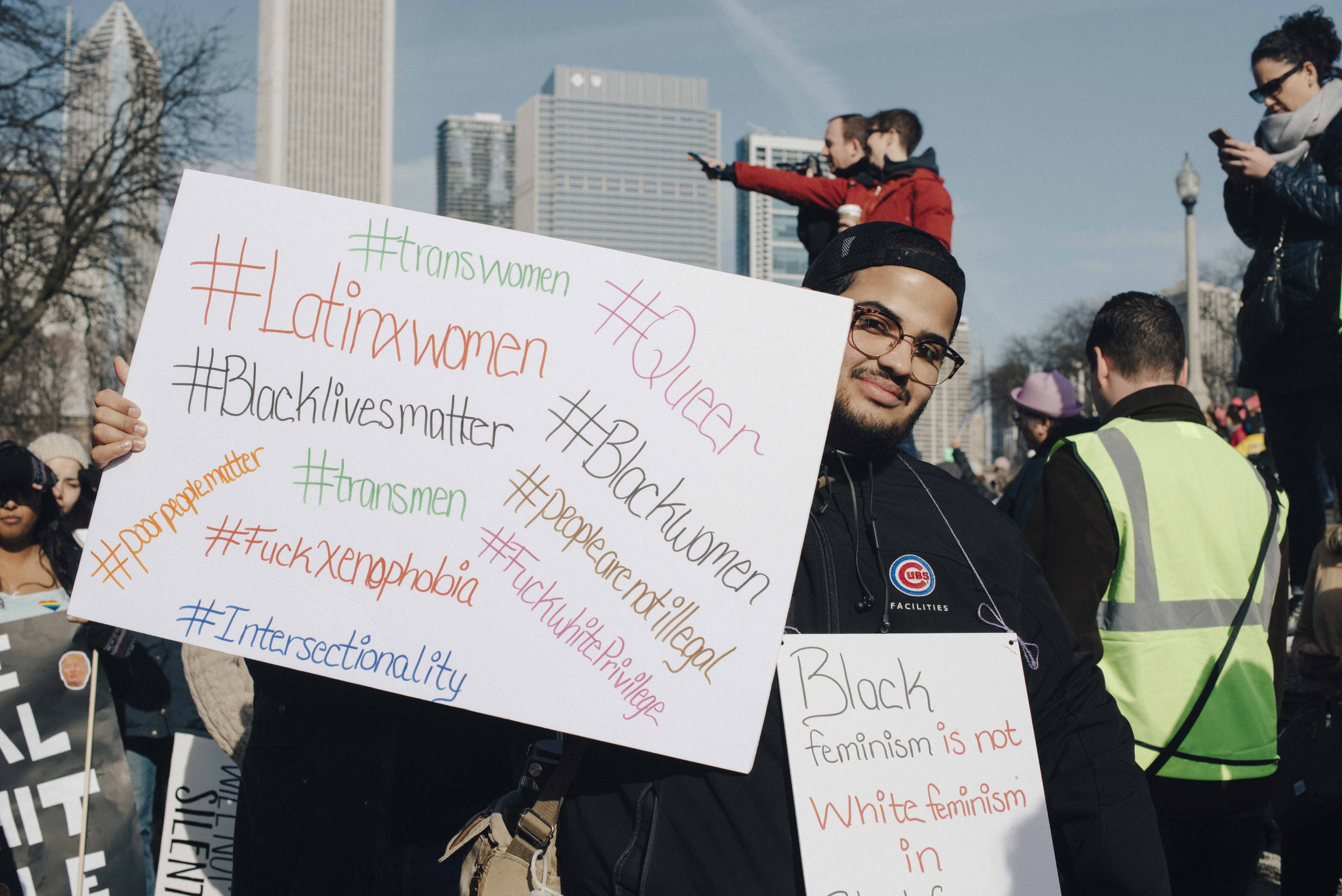 Brandon Naugle, Northeastern University student
“I’m here to support women’s rights, especially women of color. There’s still white privilege in the women’s march, and if you want to come together, you have to accept women of all races. How can we support one another if women of color are oppressed?” (Annie Zidek, 14 East) 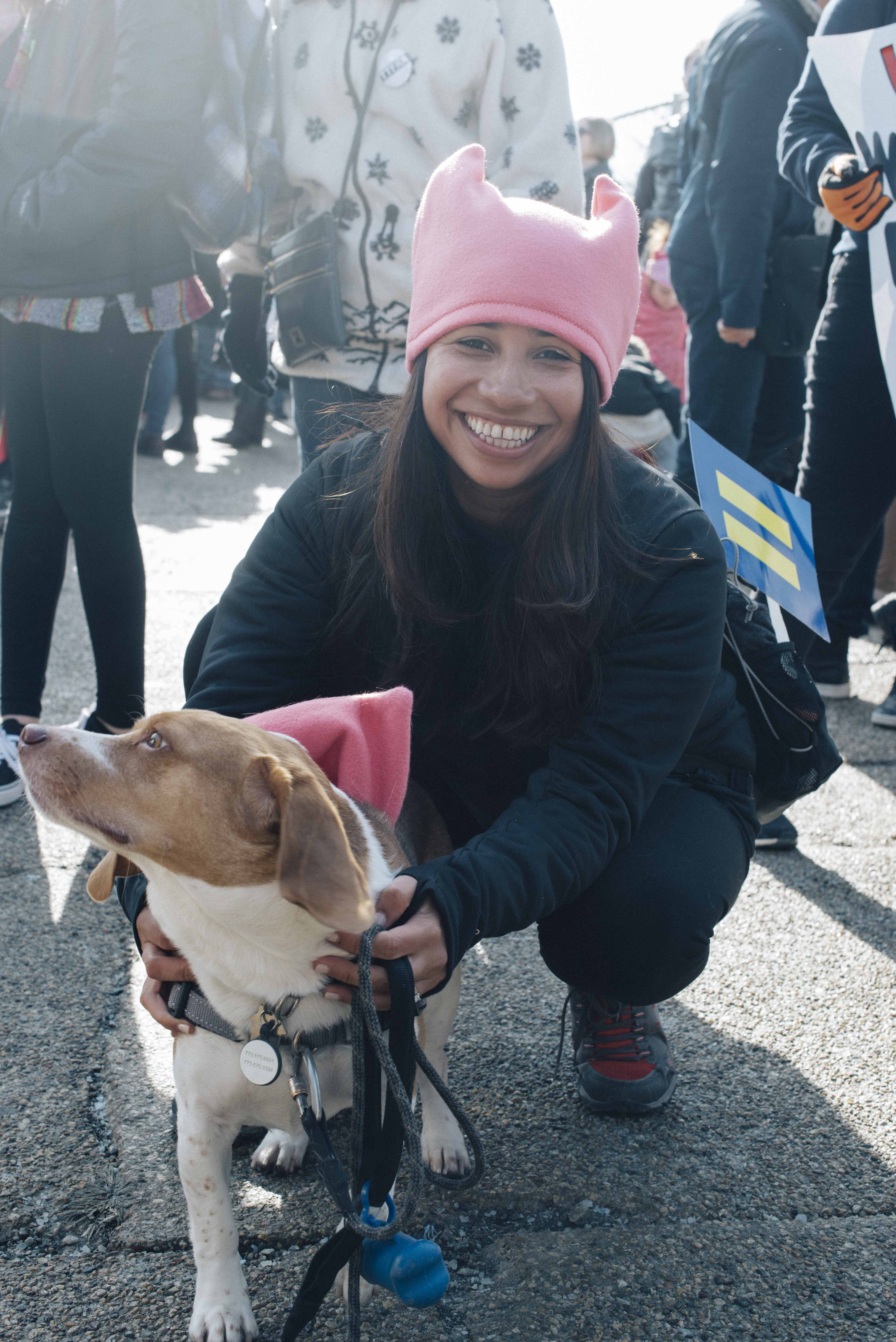 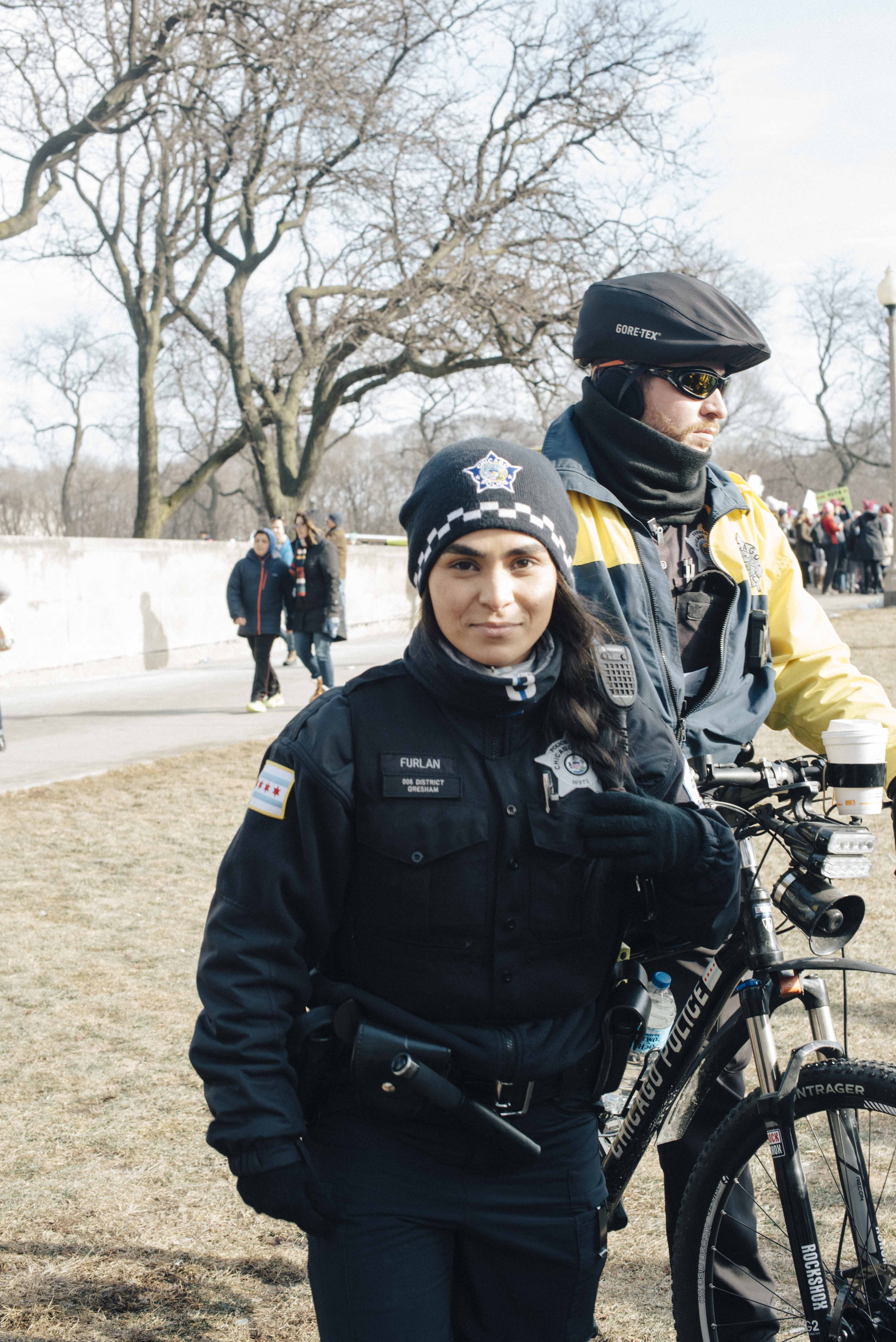 Amaris Furlan, Chicago Police Department patrolling officer
“It’s kind of empowering to see all of the women here. Especially in our profession, there isn’t a lot of women… I hope it encourages others, especially the little kids. We can do anything a man can so it shouldn’t discourage you.” (Annie Zidek, 14 East) 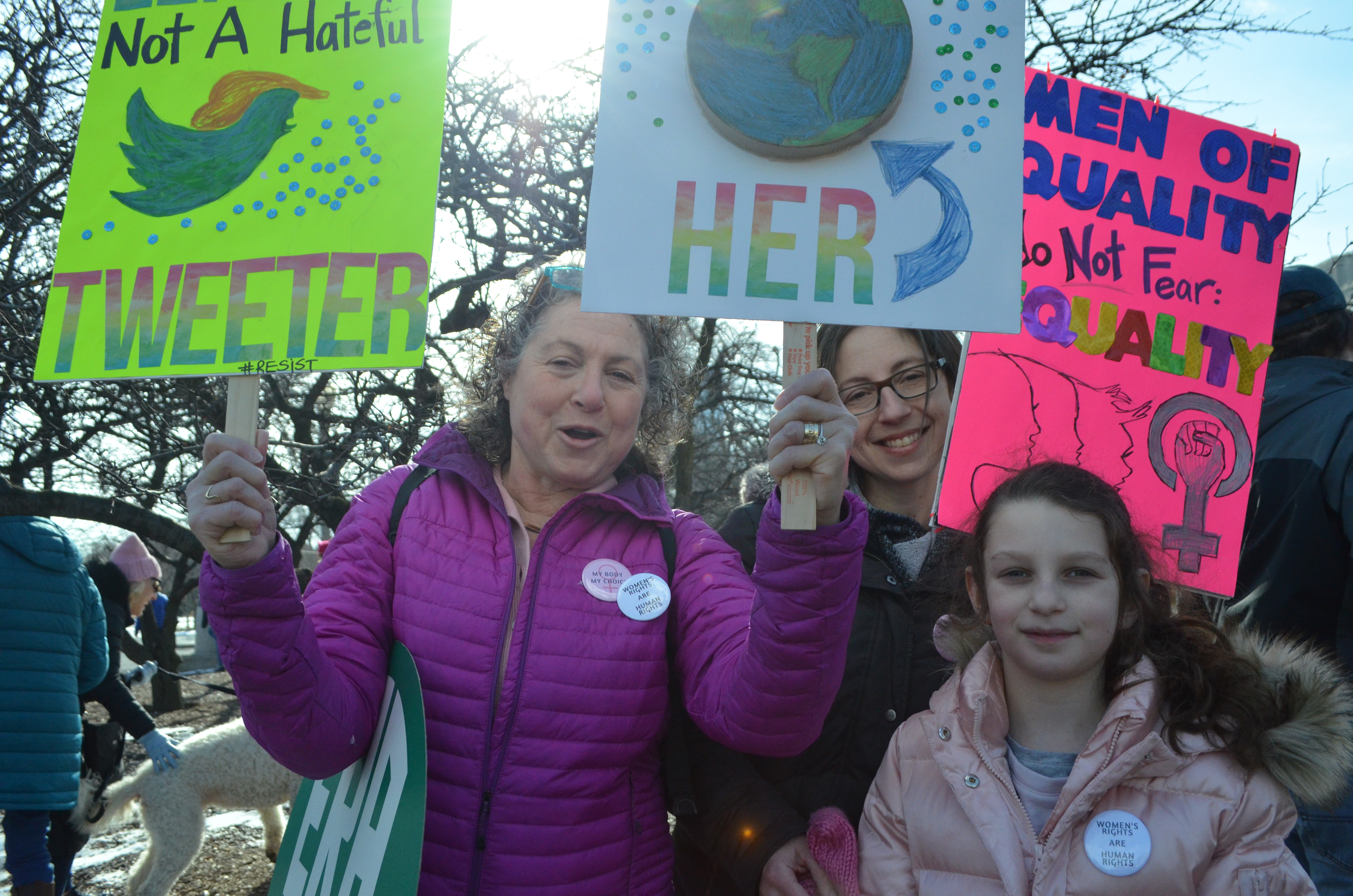 Susie Lorge (left), Alyssa Dryver (middle) and Ella Dryver (right), Illinois residents and grandmother, mother, daughter
Susie: “There’s a lot of power in coming together as a family...This is just another way to show that is, again, a new generation and a future generation that, just like Martin Luther King, in a peaceful way, and show that we have love in our hearts, and not hate." Ella: “And we wanted to protest peacefully, we didn’t want to say bad things about Trump, we wanted to be friendly about him. But not like ‘We love Trump’... And we gotta respect women, animals, and the earth. Thank you.” (Megan Stringer, 14 East)