How the March For Our Lives Mo..

7 Things We Learned From Our #DePaulPublicNewsroom...

One Year Later: What I Learned.. 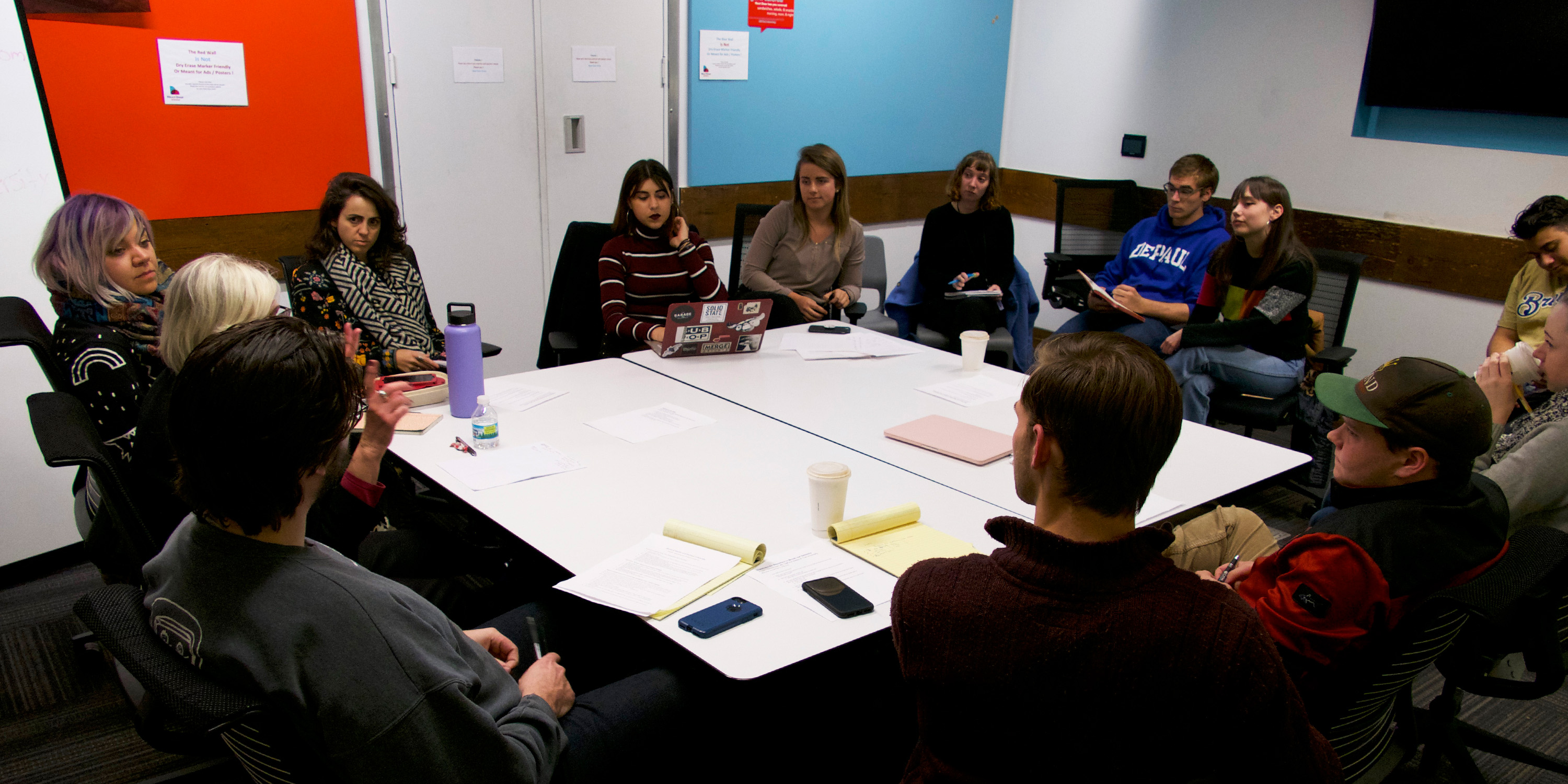 What happens when DePaul student media reports on the university?

Student media is a part of DePaul University, but being students doesn’t stop us from reporting on stories that might reflect negatively on the university. The DePaulia was the first to write about a family connection between DePaul’s Athletic department and Wintrust Bank, which was given naming rights to the arena DePaul helped finance. 14 East also reported on a story about the controversial closing of the Center for Identity, Inclusion and Social Change in 2016.

We’ve found that not everyone realizes DePaul coverage is fair game for student media. In fact, during one of our weekly meetings this year, a student asked if they were allowed to cover a potentially negative story about DePaul. Our answer: absolutely.

On Monday, November 5, we held our sixth Public Newsroom with DePaul’s Chapter of the Society of Professional Journalists (SPJ) about this topic. The monthly programming series originated from City Bureau, a nonprofit journalism newslab based in Woodlawn. This month, we brought in reporters from The DePaulia and Radio DePaul to talk about what it’s like reporting on DePaul University as student media news outlets of the same university. We also talked with DePaul spokesperson, Carol Hughes, about her experience working with student media. Here’s what we learned.

DePaul faculty members do not have to receive permission to talk with student or professional media.

Hughes said this is for two reasons. The first amendment, the right to free speech, and academic freedom, a principle that says faculty can share their knowledge and expertise freely.

Professors and administrators might be busy, but it shouldn’t take two months for them to meet with you.

Megan Stringer, an associate editor at 14 East, asked Hughes what a reasonable amount of time is to wait for a faculty or administrator to be available for an interview. While many at DePaul hold busy schedules, Hughes said reporters shouldn’t have to wait two months (which Stringer reported experiencing during her story about the closing of the Center for Identity, Inclusion and Social Change). Hughes said a week or so is a realistic amount of time to wait.

Ask the right questions. Don’t ask for a comment.

Be specific when asking university officials and spokespeople for information. Hughes said they’ll answer exactly what you ask — nothing more, nothing less. So be thoughtful and intentional about how you phrase your question.

When things get tough, don’t give up on your story.

While working on The Lenti Connection with Jonathan Ballew, Shane Rene, managing editor of The DePaulia, said they had a difficult time getting crucial sources in the story about the Athletic department’s connection to Wintrust Bank to speak with them. So Rene and Ballew shifted their approach and explained the challenges in their reporting process.

While reporting on a story about DePaul, see how it compares to other universities.

Doug Klain, the podcast director at Radio DePaul, worked on a podcast about the Student Government Association (SGA) election in 2017 that just won the first place Pinnacle Award for best podcast from the College Media Association. Klain said he was able to contextualize the story he was working on by learning how SGAs at other universities operate.

Know as much as you can about your story before reaching out the the university.

This way you know exactly what information you need and what questions to ask, said Ben Conboy, editor-in-chief of The DePaulia.

While Hughes and other DePaul faculty will do their best to respond, sometimes the information you are looking for isn’t easily accessible.

The relationship between DePaul University and its student media might seem tricky. However, ties to the university don’t prevent student outlets like The DePaulia, Radio DePaul, Good Day DePaul and 14 East from reporting on stories that might cast DePaul in a negative light. And while DePaul might not love all of student media’s coverage, Hughes just asks for it to be fair and balanced –– something the reporters from Radio DePaul, The DePaulia and 14 East all agreed is a necessity.

For more information about what we talked about, view our tip sheet for reporting on DePaul University that we handed out at the newsroom.