5 Issues That Matter Most to Y.. 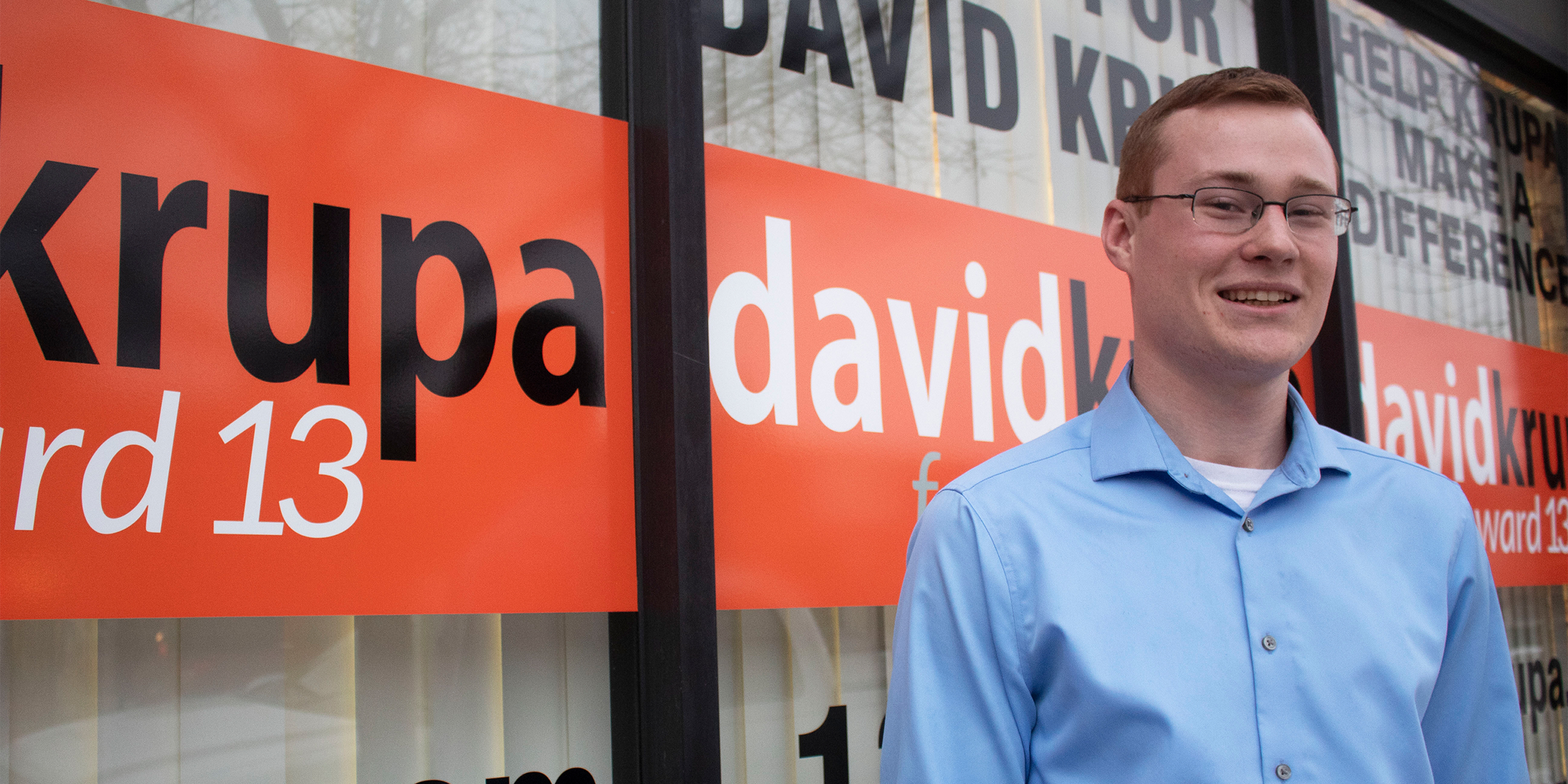 In this collaborative podcast, 14 East and the Radio DePaul Podcast followed DePaul freshman David Krupa’s campaign through election fraud, fraught public forums, ongoing legal investigations and a call-for-change political platform that has left some 13th Ward voters with confusion. Listen to the Radio DePaul Podcast on Apple Podcast and Soundcloud, or find them online here.

On the morning of Monday, January 28, as five inches of fresh snow coated the ground outside 5638 W. 63rd Street in Chicago’s 13th Ward, “David Krupa For 13th Ward” signs coat the exterior of the office space in large black and orange lettering. Inside, the DePaul freshman and 13th Ward aldermanic candidate stands stiffly behind a small wood-paneled podium, addressing a small media crowd. To his right stands his lawyer, Anthony Peraica, the two flanked by an American flag and a Chicago flag. Facing the crowd, a skinny wooden cross is displayed outward on the stand.

The podium isn’t his — Krupa, who himself is Roman Catholic, borrowed it from the local Veterans of Foreign Wars. Apparently podiums are hard to come by, and with election day less than a month away, Krupa hasn’t had the chance to purchase his own yet. He still has to return the stand before heading up to Lincoln Park for class later.

As Krupa addresses the crowd he seems to bend over as he reads from the wooden structure, so short it barely comes to his waist. Yet the news is bold — Krupa is announcing his federal lawsuit against incumbent 13th Ward Alderman Marty Quinn on the grounds of election fraud and civil rights violations.

How did Krupa, a 19-year-old DePaul freshman, come to be standing behind a borrowed podium, legally challenging one of Chicago’s most powerful aldermen? Why is a college freshman running for alderman, anyway? And with less than a month until election day, does he have a chance?

David Krupa’s story starts in the same space his campaign begins. Raised by middle-class, Polish Americans, Krupa has been a lifetime resident of Clearing, Chicago, in the 13th Ward. He attended Fenwick High School, is involved with the local Veterans of Foreign Wars chapter and works a forklift at FedEx.

David Krupa is joining the increasing number of DePaul students running for political office. In 2018, sophomores Hadiya Afzal and Bushra Amiwala ran for DuPage County Board and Cook County Commissioner, as well as senior Matthew Roney’s brief run for mayor.

“I think that it’s very noble that DePaul students are taking a lead on this, you know, this is something that our generation has to step up and do sooner rather than later,” Krupa said.

Krupa is the only member of his family to be involved in politics, though Krupa mentioned they do discuss political matters.

“I was supportive of whatever David wants to do,” said Jennifer Krupa, David’s mother. “I was nervous and scared at the same time. Chicago is a really tough city. It is tough to go against big politicians.”

Running as an Independent, Krupa’s top five issues include education, security, infrastructure, reforming the pension system and lowering property taxes. His main platform is a call for change — especially in a ward that hasn’t had a contested election since 1991. And Krupa isn’t afraid to be vocal about the perceived “political machines.”

“I’m a pretty loud person when it comes to talking about this stuff. I’m never afraid to say Mike Madigan’s name,” Krupa said. “I think that’s that might be some of the Polishness. When Polish people don’t like something, they talk about it.”

In the 13th Ward, the name of Alderman Marty Quinn is almost synonymous with House Speaker Mike Madigan. The two share a physical office space and as of February 5 Madigan has donated over $17,000 to Quinn’s campaign, according to Illinois Sunshine.

Krupa experienced the infamous Chicago corruption in his own campaign. The Cook County state’s attorney and the U.S. attorney offices are both conducting investigations into alleged fraud brought by Quinn’s campaign to Krupa’s. As Krupa knocked door-to-door grabbing signatures, Quinn followed badgering people to revoke them.

A candidate needs 473 petition signatures to run for alderman. Krupa reported 1,703 nominating signatures to add his name to the ballot, while the amount of sworn affidavits filed by Quinn revoking signatures from Krupa’s campaign totalled 2,796. Only 187 were real.

14 East and the Radio DePaul Podcast went to the Board of Elections to take a look at the petitions for ourselves. What we found was a process complicated by a federal lawsuit containing public documents, making it unclear to citizens and workers their public accessibility. After we were cleared by legal counsel to view the documents, we were presented with a cardboard box full of individually packaged affidavits. That means over 2,600 revocation forms were filed as individual legal documents. Nowhere on the revocation form does it outline that the signee can face fines for falsified revocations. Some date as far back as September 2018.

“I don’t think that a lot of people understood that this was a legal document,” Krupa said. “Unlike a petition, you can actually get in trouble for what you’re signing.”

Krupa’s response was to take legal action. So, on January 28, less than a month from election day, he announced a federal lawsuit against the Quinn campaign, citing “the deprivation of civil rights.” Krupa stressed that his motive for the lawsuit is the same as his campaign — to hold political power accountable. What happens after the election day results — when signatures become void — remains unclear.

Yet Krupa’s own campaign hasn’t been squeaky clean, either. Running as an Independent, Krupa’s campaign seems to be anything but.

He has received endorsements by notable Republican gubernatorial candidate Jeanne Ives. Earlier in his campaign, a photo of him from 2016 resurfaced wearing a “Make America Great Again” ball-cap and holding a sign that reads “Hillary For Prison.” In 2016 he also described himself as a “day-one Trump supporter,” including endorsing the then-presidential candidate’s stop-and-frisk police policy.

“Mike Madigan’s people are trying to paint me as a danger to the community,” Krupa said. “They’re calling me a racist and saying that me wearing a shirt when I was 16 is somehow going to affect how I govern over people of [Latinx] backgrounds.”

The demographic of the 13th Ward is roughly 63 percent Latinx residents, 33 percent white, according to information from the City of Chicago compiled by WBEZ. The ward is segmented into two halves by Midway Airport, which remains outside of the ward jurisdiction but employs many of its residents.

During an aldermanic forum on January 24, Krupa referred to the photo as the “elephant in the room.” His answer was that the big issue for him in 2016 was, and still is, change. According to Krupa, in 2016 he only saw one candidate that represented change, and while he doesn’t agree with the president on everything today, he wants him to succeed, “so that the country succeeds.”

“He wouldn’t explain what he meant by, ‘See the president succeed,’” said Rosalba, a 13th Ward resident who referenced the photo at the forum. “Does that mean build a wall? Do other things? I don’t know.”

For a 19-year-old, Krupa has an unusual amount of his past coming back to haunt him. In 2017, the father of an ex-girlfriend — who was also a minor at the time — filed an order of protection against Krupa. The order of protection states the ex-girlfriend was “afraid David Krupa will continue to physically abuse me, harass me, interfere with my personal liberty and stalk me.” The order ran for nine months but ended when neither party could agree on a hearing date. Krupa denies any allegations.

“It was just a bunch of false claims,” Krupa said.

14 East and the Radio DePaul Podcast reached out to the family of the ex-girlfriend for comment but did not receive a response.

Can he fairly represent the diverse citizens of the 13th Ward given his past? With election day approaching, an ongoing lawsuit and a wary ward of voters, Krupa’s run for 13th Ward alderman — and his first taste of Chicago politics — has been anything but boring for the DePaul freshman. For Krupa’s campaign, it comes down to if his drive for political change is enough to afford him a place at the podium.