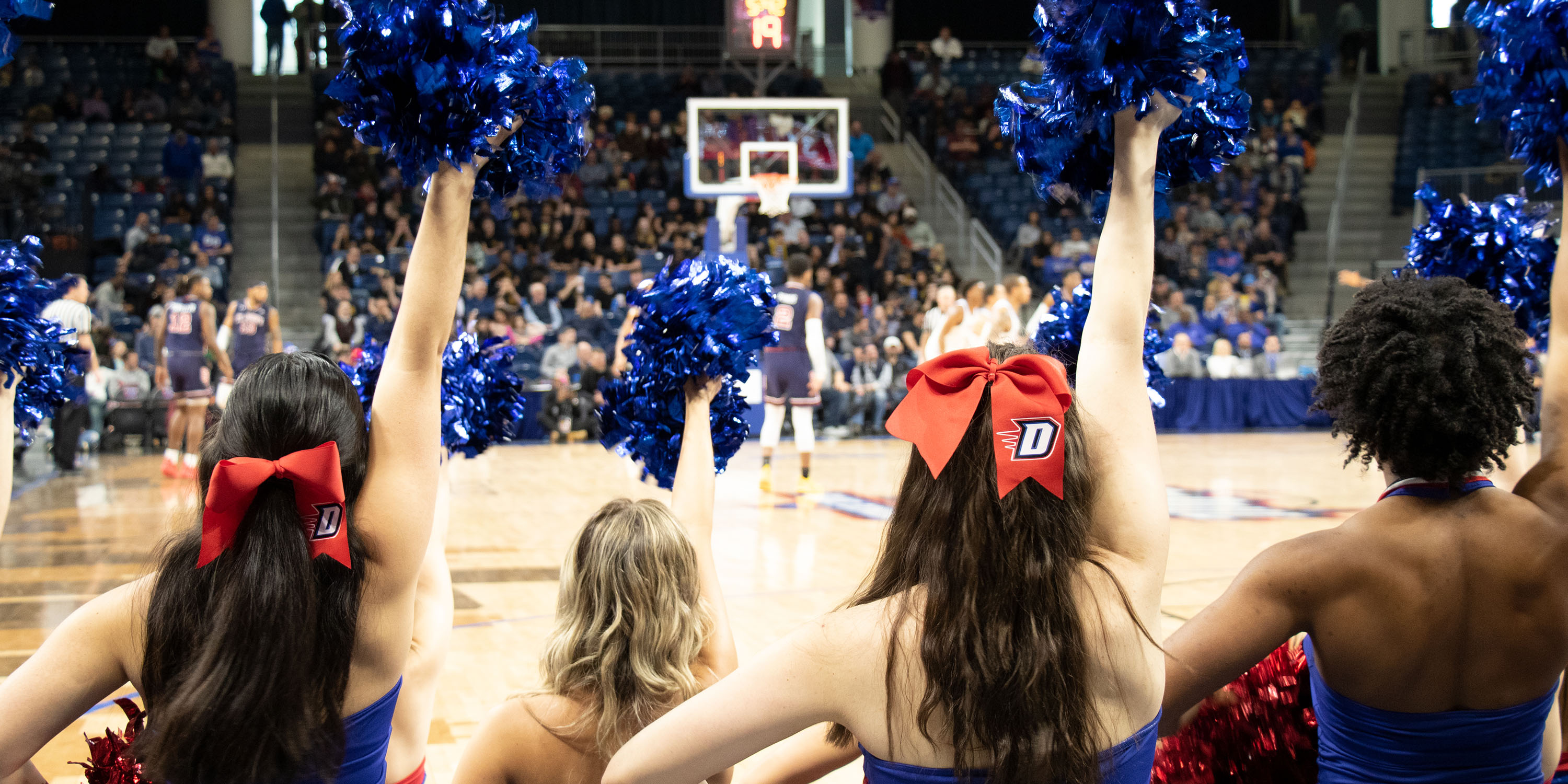 What’s the hardest part of being on DePaul’s Spirit Squad?

It’s not the early 8 a.m. call time for games. Nor is it the rigorous workouts or challenging dance routines. And it’s definitely not stunting, which is when the cheerleaders muster the courage to throw one of their own in the air.

Instead, the student athletes are in a resounding and exhausting agreement: the time commitment. Though their schedule varies from week to week, it typically includes two workouts, two three-hour practices and about three games weekly. That’s on top of being a full-time student. So, from May to April — the length of a season — their time is already booked for them.

“There are some weeks when we see each other every day,” said senior Isabella Valdes, a cheerleader. “I see the team more than I see my family.”

Though balancing their responsibilities can be difficult, it’s worth it to the dancers and cheerleaders — who together create DePaul’s Spirit Squad. Some do it because they love the sport and many of them do it because of the relationships they build with one another.

“The friendships and the connections you get through this team are amazing and something that I’m definitely super grateful for,” said senior Paige Davis, one of the Dance team’s captains. 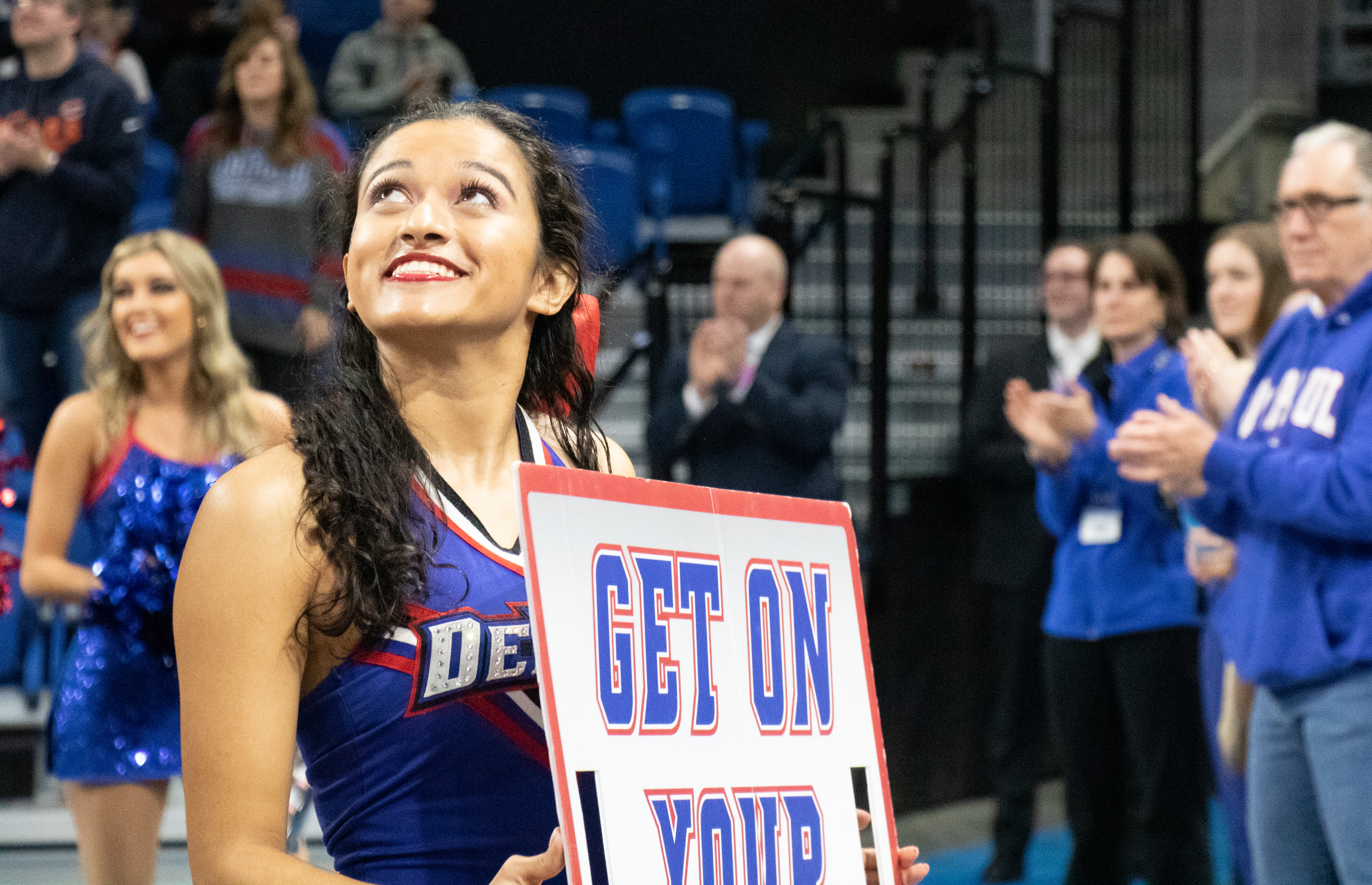 Alani Claudio is on the cheer team and she is a flyer — the person in the air — during stunts Photo: Marissa Nelson, 14 East.

Two parts of one team

At some schools, the relationship between the dance and cheer teams is tense. Whether because of administrative distinction between the two or the culture among the athletes and the student body, they’re pitted against each other.

“In high school, the cheer and dance team were very different from each other,” said freshman Sam Wrobel, a dancer. Though she had friends on the cheer team, she felt couldn’t be friends with them, especially when it came to game day.

However, DePaul’s cheer and dance teams rely on their skill sets in order to bring them closer to achieving their one, common goal: to support the university’s Men’s and Women’s basketball teams. The culture of community, intentionally fostered by the teams’ coaches and spirit director, allows them to blend their talents and perform unique routines.

“I think it’s a really great dynamic,” said senior Amanda Roberts, the other captain of the Dance team. “I think that one team couldn’t really function without the other.”

At games, the teams work together seamlessly. In fact, if it weren’t for their different uniforms — the dancers are distinguished by sequins — it would be difficult to tell them apart. Both teams welcome basketball players onto the court by creating a pom pom tunnel for them to run through. When the DePaul pep band plays, they do the same choreography. When there is a timeout, they both run onto the court to perform. And they sit and cheer with each other on the sidelines during the game.

“I think with just one team or the other, none of that would be possible,” Roberts said.

The only time the cheerleaders and dancers are not on the court together is during their performance during the second half of the game. It is then that the Dance team performs their routine and the cheer team follows with a stunting sequence and tumbling. 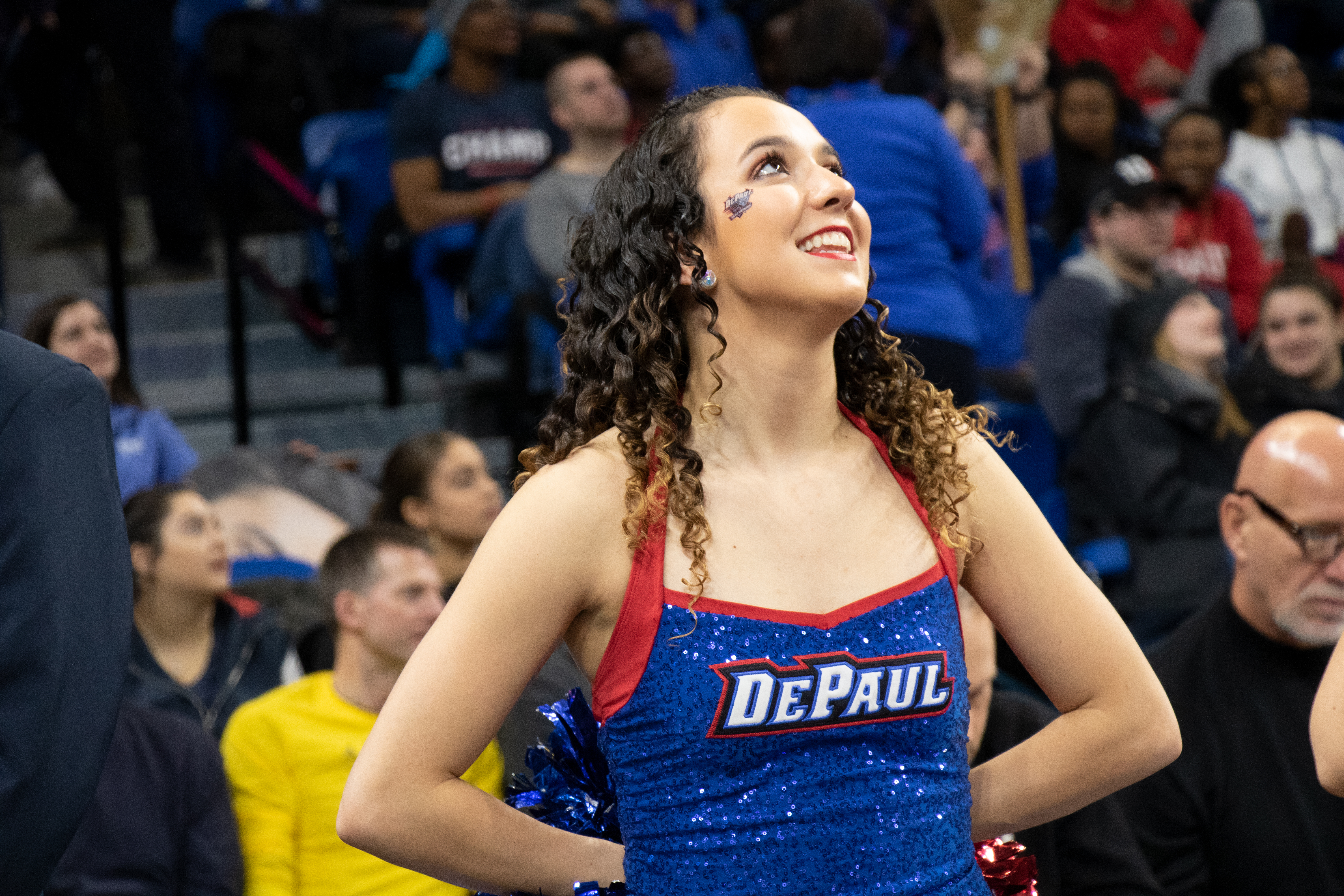 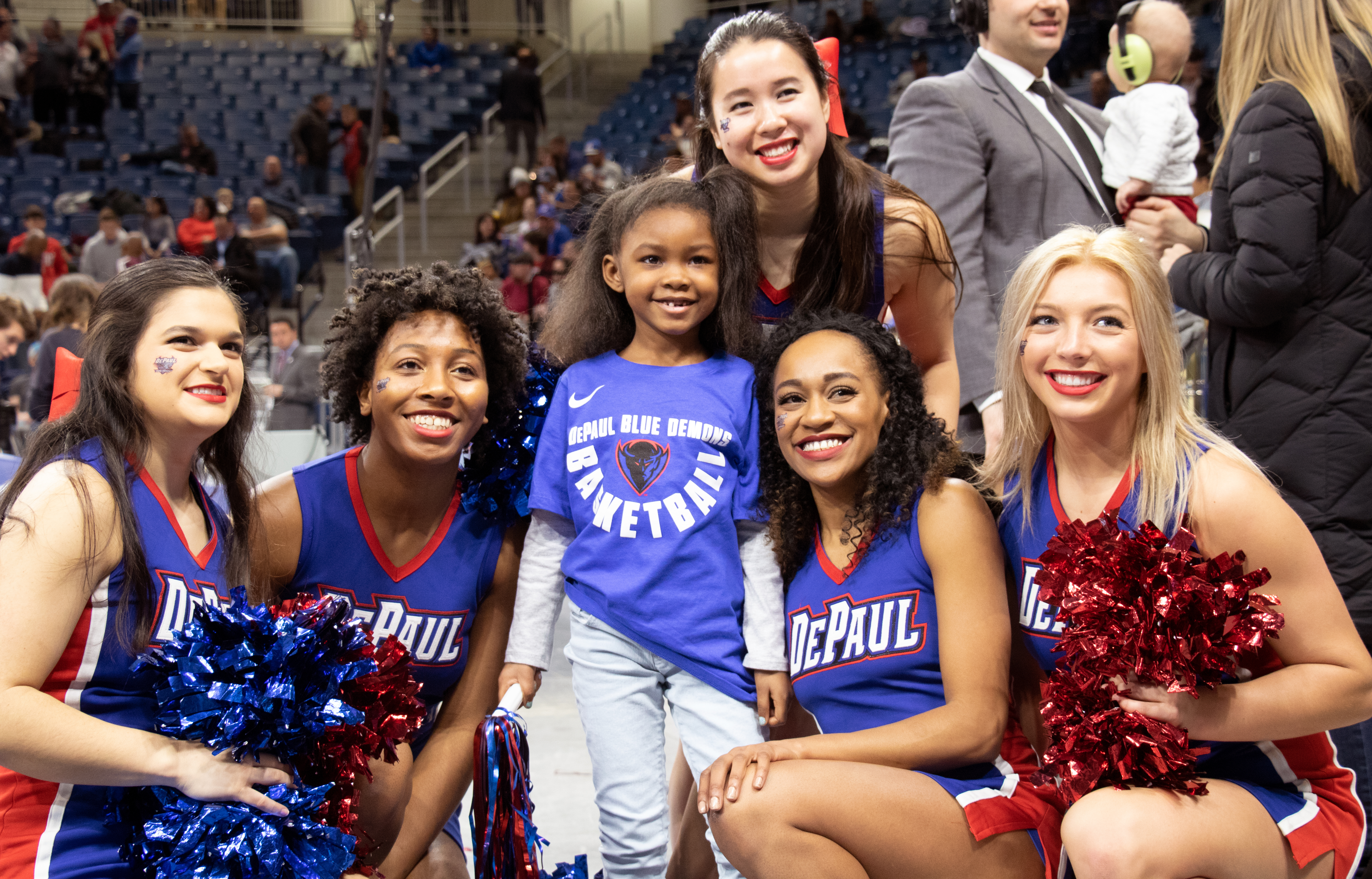 DePaul’s Spirit Squad poses for a photo with a young girl at the game. Photo: Marissa Nelson, 14 East. 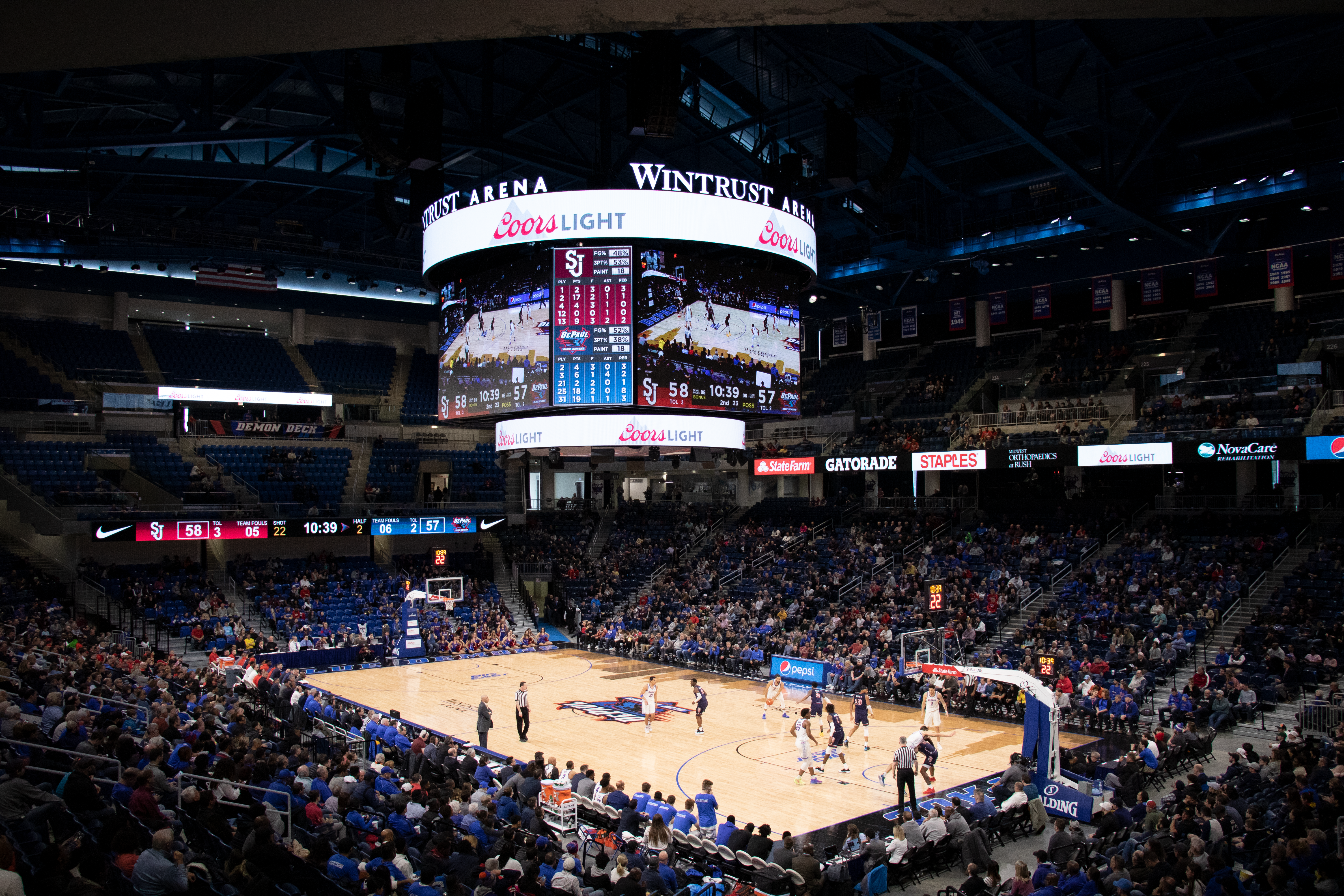 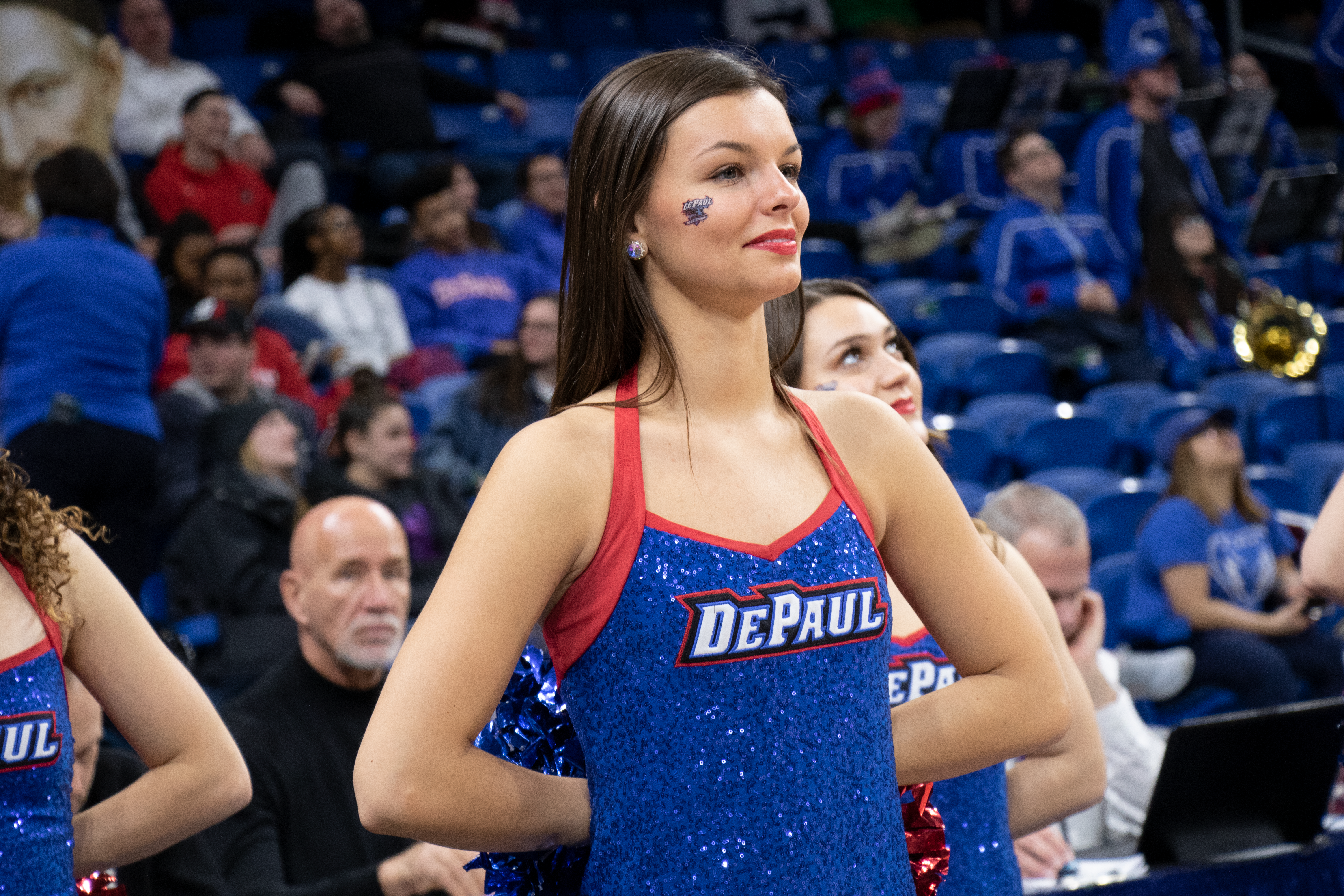 Sam Wrobel is a freshman on the Dance team. She said she has been dancing since she could walk. Photo: Marissa Nelson, 14 East. 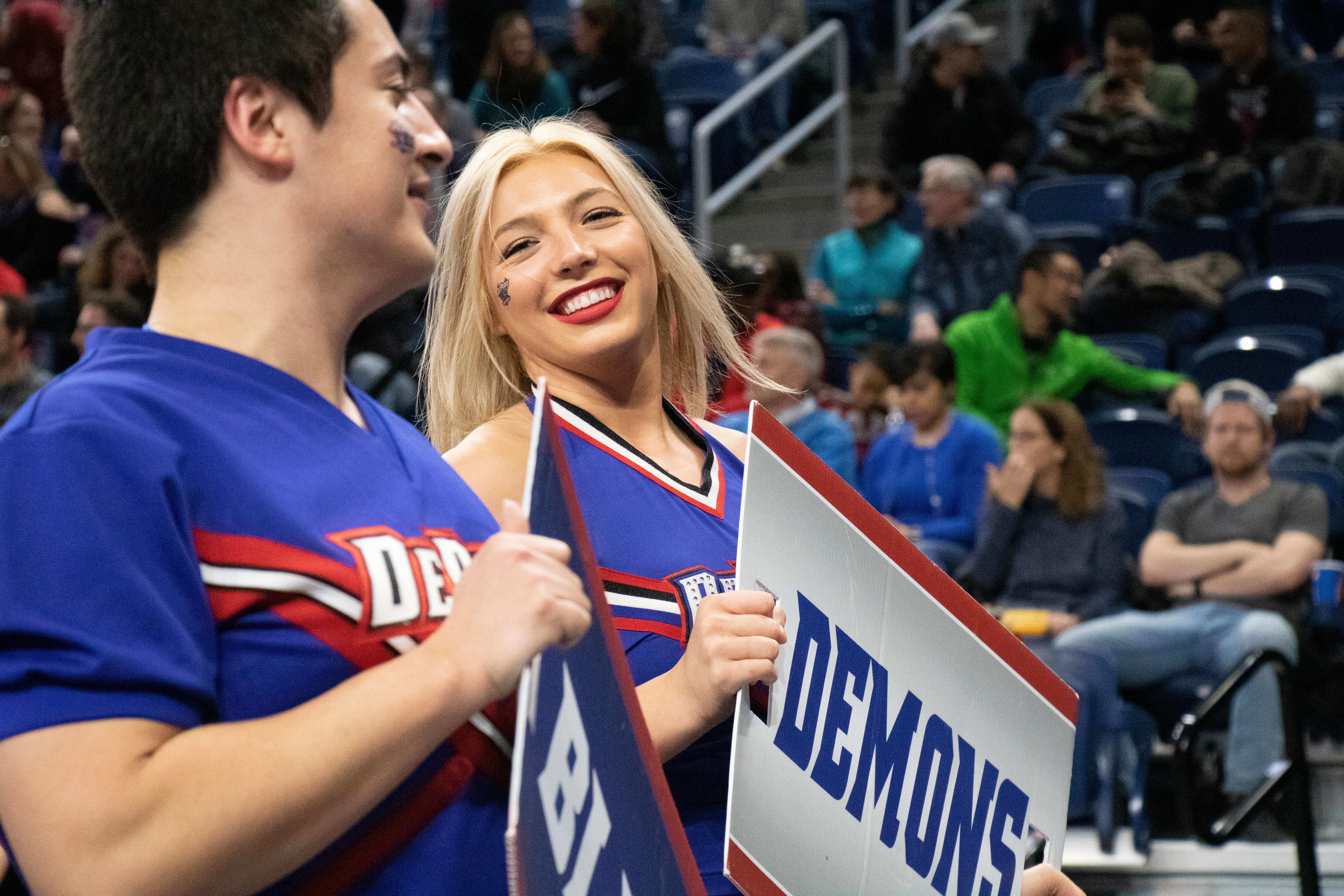 Sanchez and Smicklas cheered in front of the student section, using their signs to start a the chant, “Go Blue Demons.” Photo: Marissa Nelson, 14 East. 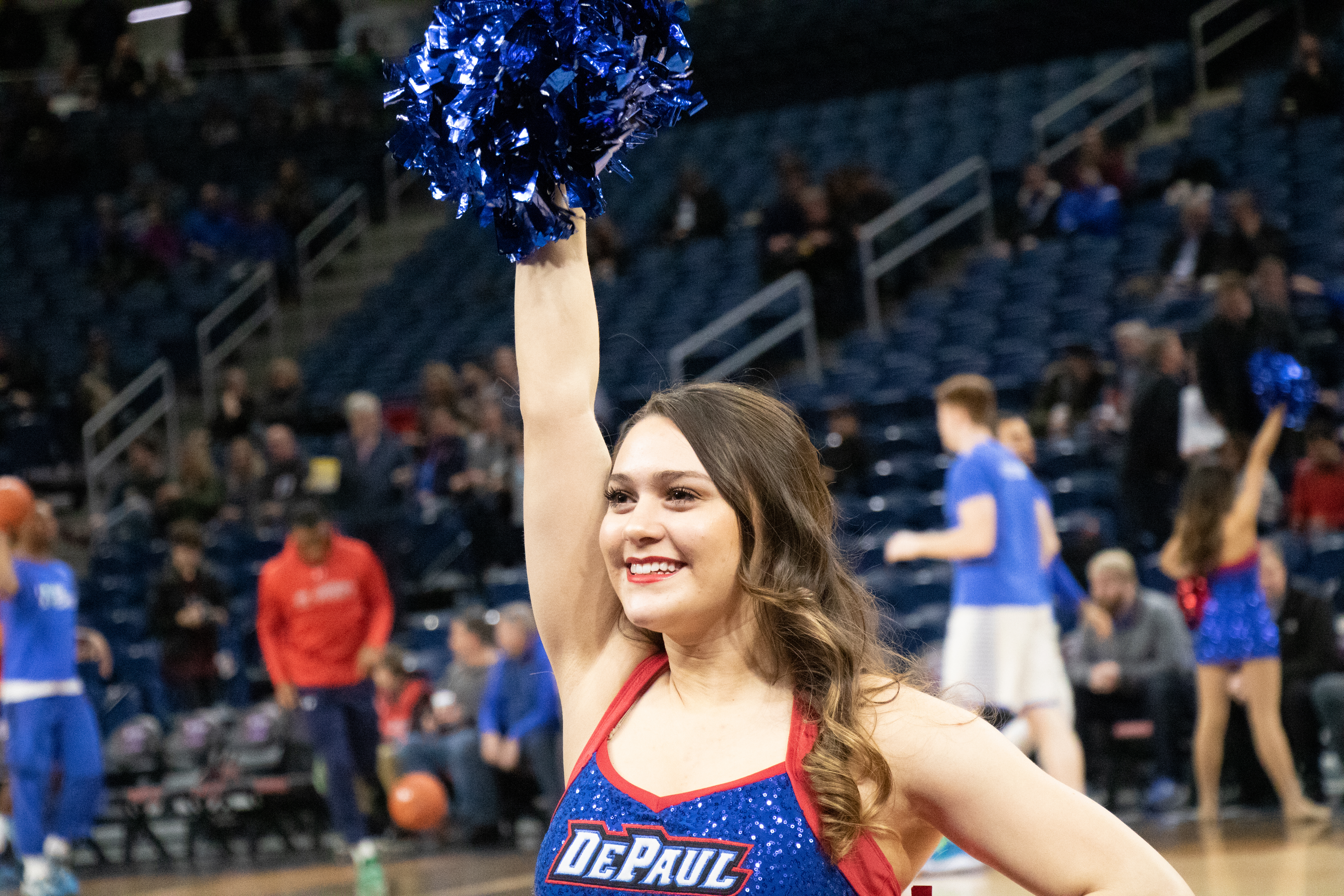 Jackie Wiser is a dancer on the Spirit Squad. While the basketball players warmed up on the court, she and the rest of the Spirit Squad performed a short dance routine on the sidelines. Photo: Marissa Nelson, 14 East. 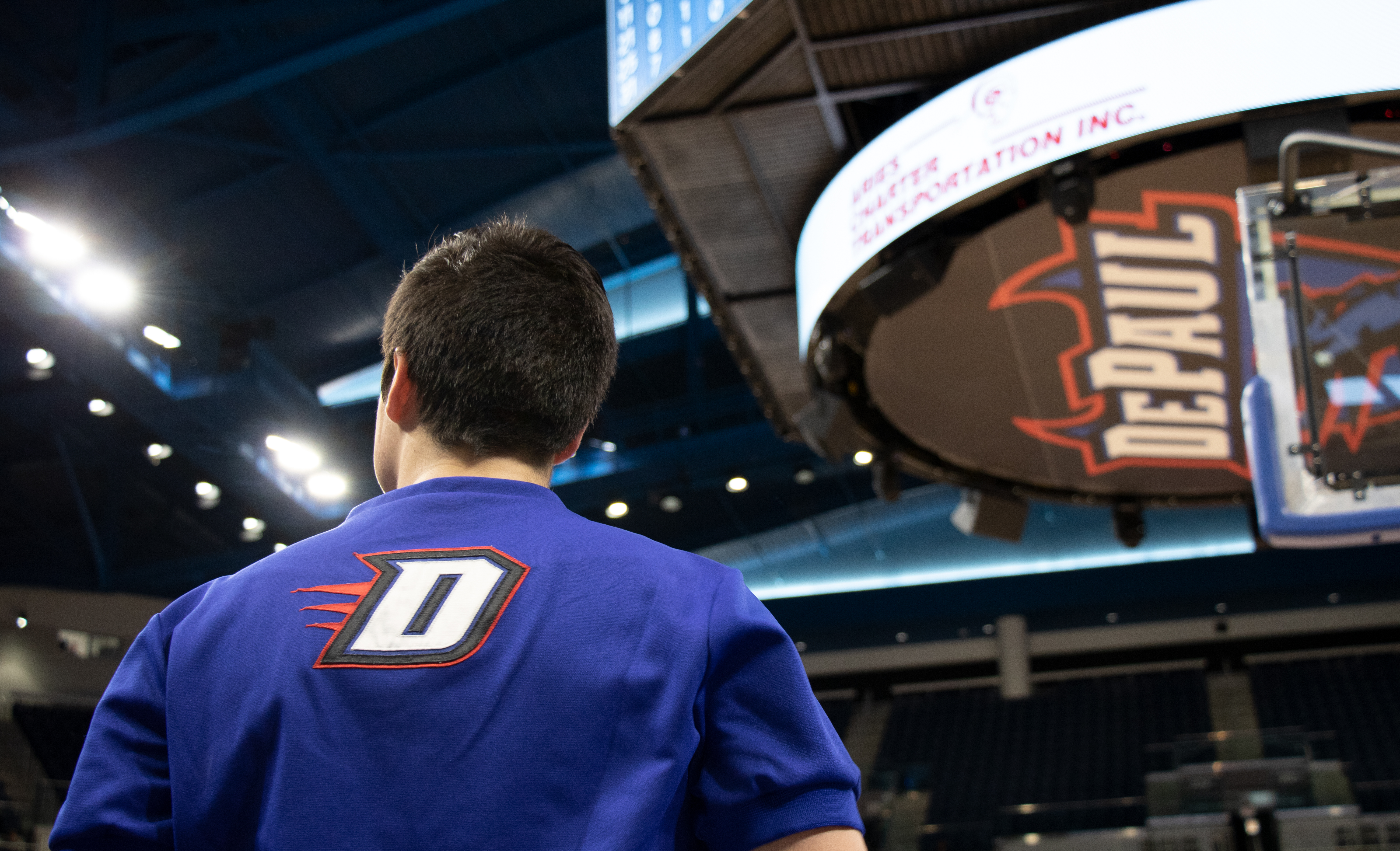 Tony Sanchez is a freshman on the Cheer team. Photo: Marissa Nelson, 14 East. 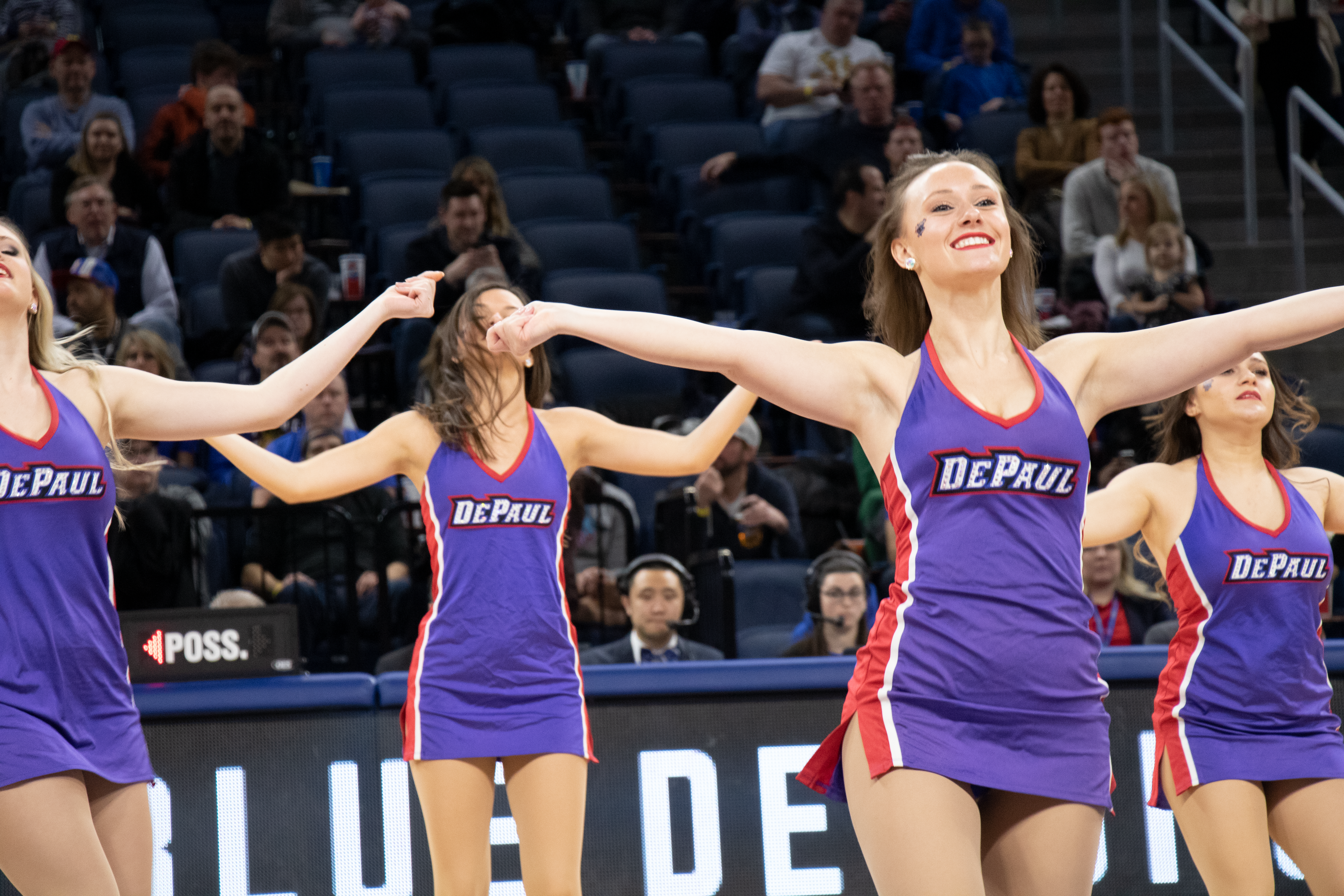 From the sidelines, the Spirit Squad watches the game intently and calls cheers when appropriate. Photo: Marissa Nelson, 14 East.

In addition to the friendships cheerleading and dancing has created for the athletes, for many it is also a form of self expression.

“This year especially,” Davis said. “The coaches allowed us to choreograph our own routines which gave us a lot of free rein and we were able to just do what we wanted and be more creative with it.”

“Whether it be watching YouTube or watching dance shows I see a lot of things I like,” Davis said. “Then the things I like I kind of pick up and put my own twist on.”

While dancing is a way for Davis and the other teammates to express themselves and their individuality, she also notes that it is important to make sure everyone works together to make one cohesive routine.

“Since it is a team, as much as creative and individual that we’d like to be, we have to all mesh together and make it look like a team and not just each person is doing their own thing,” Davis said.

Finding a way to bring each teammate together in the routine is even more important when it comes to blending the cheer and dance teams. In order for them to do this, each dancer has to learn a little bit of what the cheerleaders do and vice versa.

For instance, doing cheers and rallying a crowd isn’t typically a dancer’s responsibility. However, on DePaul’s Spirit Squad, both the cheerleaders and the dancers cheer from the sidelines and rile up the student section. Since in high school the teams are usually separated, this is something new dancers have to learn how to do.

“As a dancer I had never had any experience with any of it so I think that was the biggest shock [when coming to DePaul] was just having to learn more about what the cheerleaders do,” Roberts said.

Though cheering and dancing may traditionally be two separate sports with unique elements, the athletes at DePaul don’t see a big difference between what they do.

“I think we both bring a wow factor on the court when we go out, but I’m not really sure how to explain the difference between us,” said sophomore Caitlin Smicklas, a cheerleader. “Obviously we do different skills, but especially because our program is so tight when we do work together, it’s one whole. It’s this experience of all of us bringing different elements and skills together.” 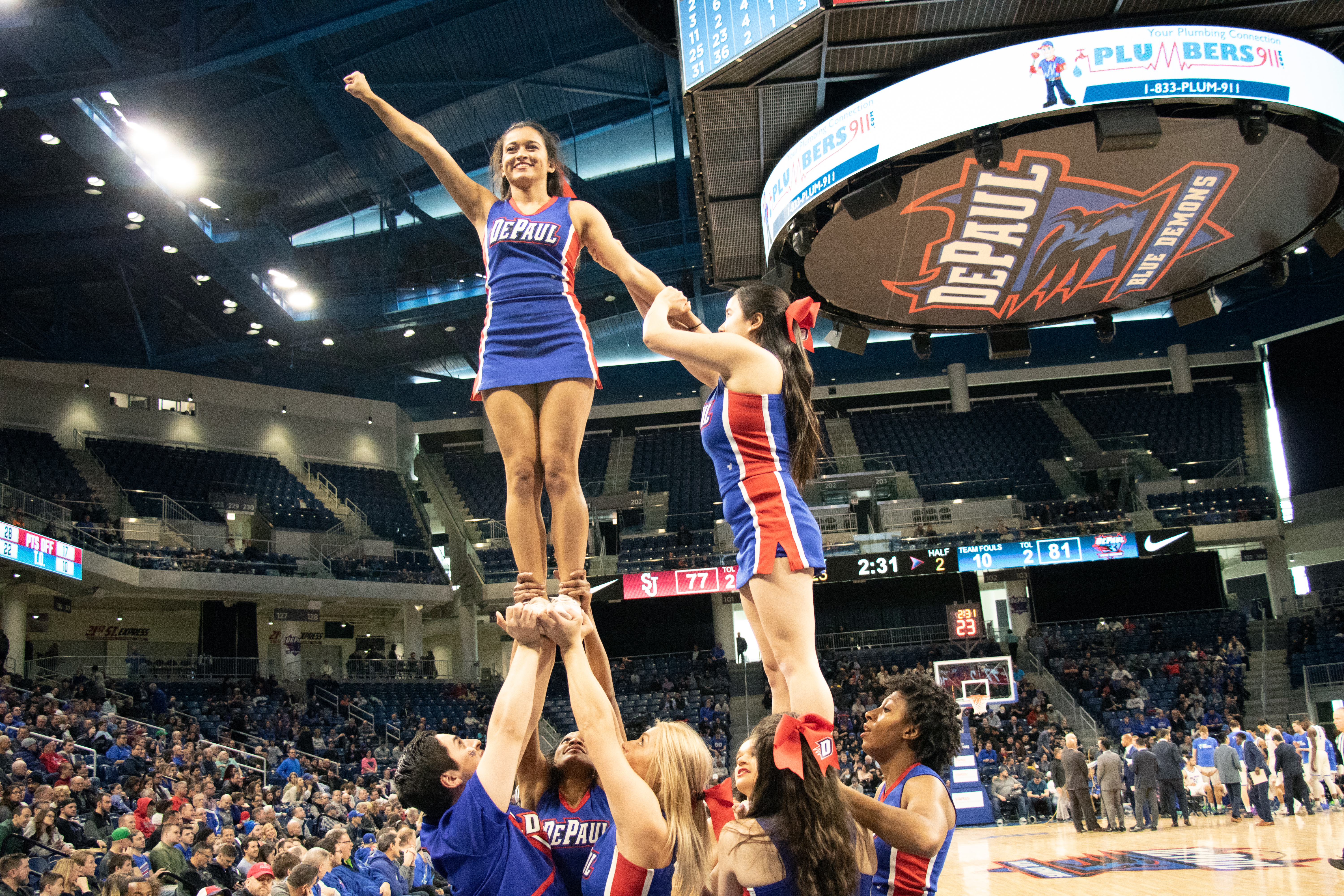 Before the Spirit Squad

The collaborative relationship between the teams didn’t always exist. In fact, it’s relatively new. Until 2012, the dance team wasn’t a part of the Athletics Department at all — it was just a club on campus.

“When I took it over was when dance became under the umbrella of Athletics, and that was a big pull to make sure that both groups were working together, performing together, feeding off each other,” said Shanon Lersch, who was on the Dance team during her undergraduate career at DePaul from 2000 to 2004. She then coached the Dance team from 2004 until 2012, when she became the spirit director.

“Cheerleading is well known across the board as being a part of Athletics,” Lersch said. “But to have both of those under the Athletic umbrella is huge and it’s also not as common across most NCAA schools.”

Before the dance team became a part of Athletics, there wasn’t a strong relationship between the two. While the cheerleading program at DePaul has a rich history, dating back to 1920, the dance team hired its first coach for Lersch’s freshman year.

“Our common goal is to reach the students, reach the fans and get them excited and then showcase our talent,” Lersch said. “We both have the same end goal, why wouldn’t we be working together?”

The focus on cross-sport collaboration has helped each of the athletes gain a new perspective on what their teammates do and how hard they work.

The athletes have come to appreciate the differences in each sport and the skill each requires, while also developing an understanding of what unites them.

“We’re all similar in a lot of ways,” Roberts said. “We all love what we do. We’re here to support the university and present the university in a positive way. We all want to have fun.”

Rather than allowing their differences to get in the way of their relationship, or seeing their similar role as a reason for competitive tension, the two teams work together to cheer on the Blue Demons, while also supporting one another.

“It’s nice to have basically our own little cheerleaders in our corner when we are going out on the court or when we are trying a new skill at practice,” Smicklas said. “It’s always nice to know that people are rooting for you.”