Memorial Day is a Holiday Open to Interpretation

Memorial Day is a Holiday Open to Interpretation 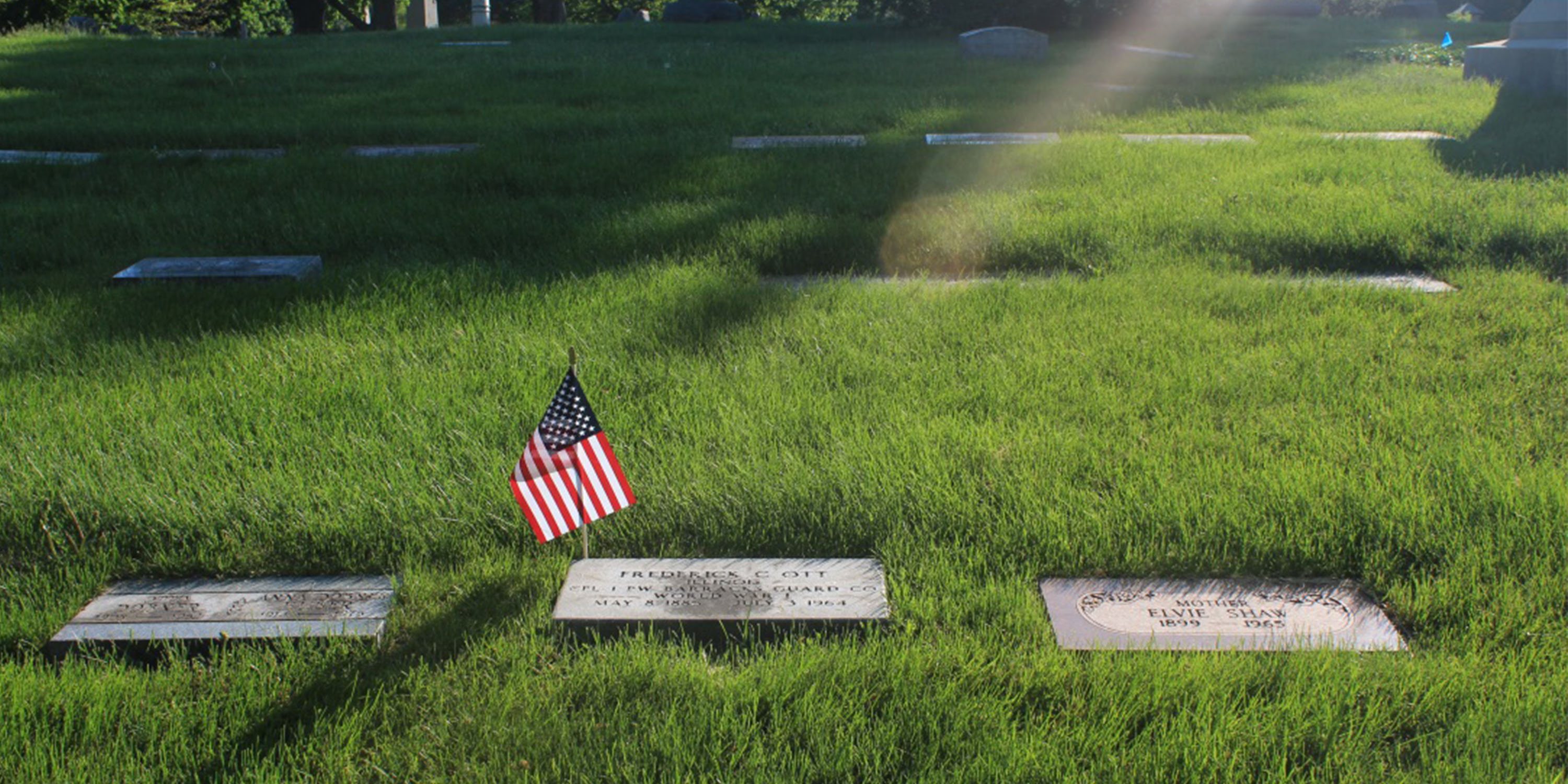 In central Grant Park at the intersection of Michigan Avenue and 9th Street, Major General John A. Logan looms over the park from the back of his steed. Wind gusts through the rows of seated guests in the tent in front on the Logan statue, sending an array of green buds, white petals and helicopter seeds whirling from the trees above. Simultaneously, a loud up-tempo baseline floats throughout the air at North Avenue Beach. From 100 feet away, the shore and horizon are completely blocked out by scores of young people in the sun. May 28, or Memorial Day, has begun.

Noted in fashion blogs, boating season and academic calendars across the country, Memorial Day is often used as a signal to mark a change in the season. The holiday is celebrated nationwide on the fourth Monday in May, but Memorial Day has more than a few iterations and meanings in Chicago and Midwestern towns.

It all starts with John A. Logan.

“The history of the Memorial Day Parade actually spans centuries and it began shortly after the Civil War ended after General John Logan declared that the 30th day in May at that time be designated for the purpose of decorating the graves of soldiers who died,” said Laura Jones, the associate director of Chicago Loop Alliance, an organization that promotes the Loop to businesses and visitors.

The Logan Event, a memorial service and wreath-laying ceremony with music and 21-gun salute maintained by the Chicago Cultural Mile, celebrates the contributions in battle and Senate terms of General Logan, the man Logan Square was named after. This event is one of Chicago’s longest-running Memorial Day events, second only to the Memorial Day Parade that occurs on the Saturday of the holiday weekend.

The parade is put on by the City of Chicago Office of Cultural Affairs and Special Events, and includes local marching bands, floats from veteran organizations, local JROTC schools and cultural groups showing support and remembrance. Jones makes sure Chicago Loop Alliance is one of the organizations that co-sponsors the parade. 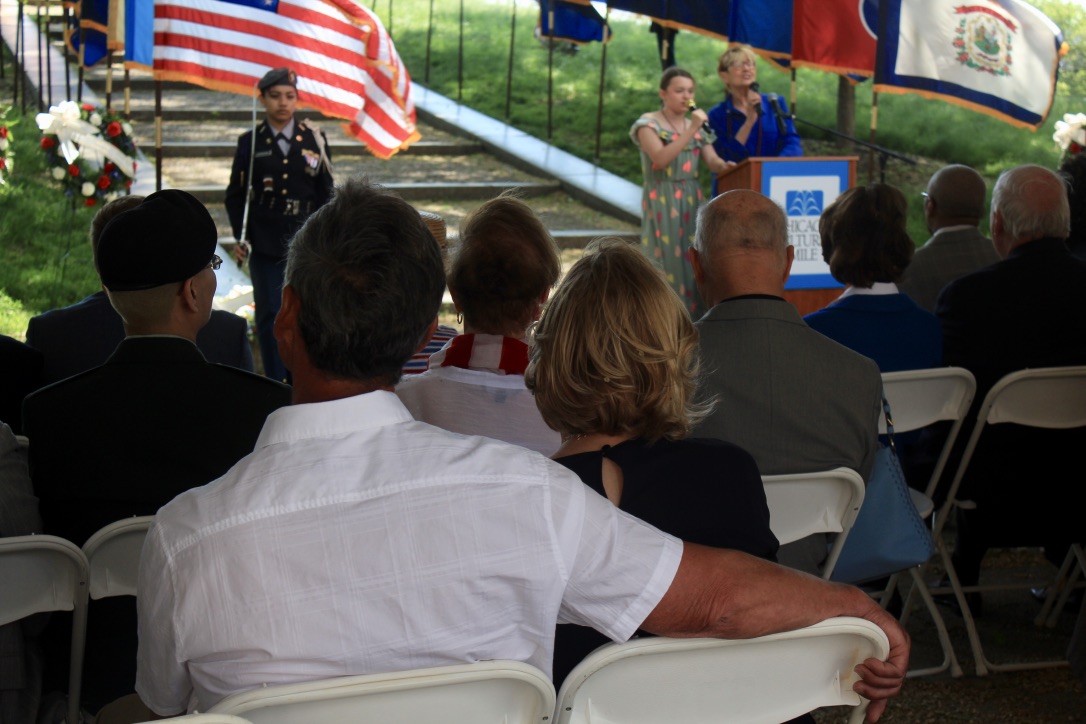 “We provide 10,000 small, handheld flags to the pedestrians that watch the parade. We do patriotic flags and banners on the light posts on State Street,” Jones said.

During World War II, the military actively displayed military vehicles on State Street to raise funds as the first form of the parade, according to Jones. It moved to Michigan Avenue during the Vietnam War and faded until it was brought back around 2000. In addition to the parade, Chicago Loop Alliance also is involved in the wreath-laying ceremony at Daley Plaza and the Macy’s breakfast for Gold Star families.

“When we really got involved with the Gold Star families when the parade moved back to State Street, it was my privilege to call some of them and invite them to the city of Chicago for this specific parade and breakfast, and it’s heart-wrenching. It’s calling someone who is grieving and we don’t always fully realize the impact or the sacrifice that these families make,” Jones said.

Instead of checking-up on his service buddies like he normally does, U.S. Army veteran and DePaul senior Ricardo Rivera spent last Memorial Day in the sun. He participated in the Ruck March, a 20-mile march from Glencoe to Evanston, with other members of the DePaul Student Veterans Union.

“I did it [rucking] before in the military, but it’s been like years since I entertained something of that extent,” said Rivera. “It wasn’t as bad as I was thinking, probably because I was able to wear shoes, you know, gym shoes, not boots, and pretty much do it comfortably.” 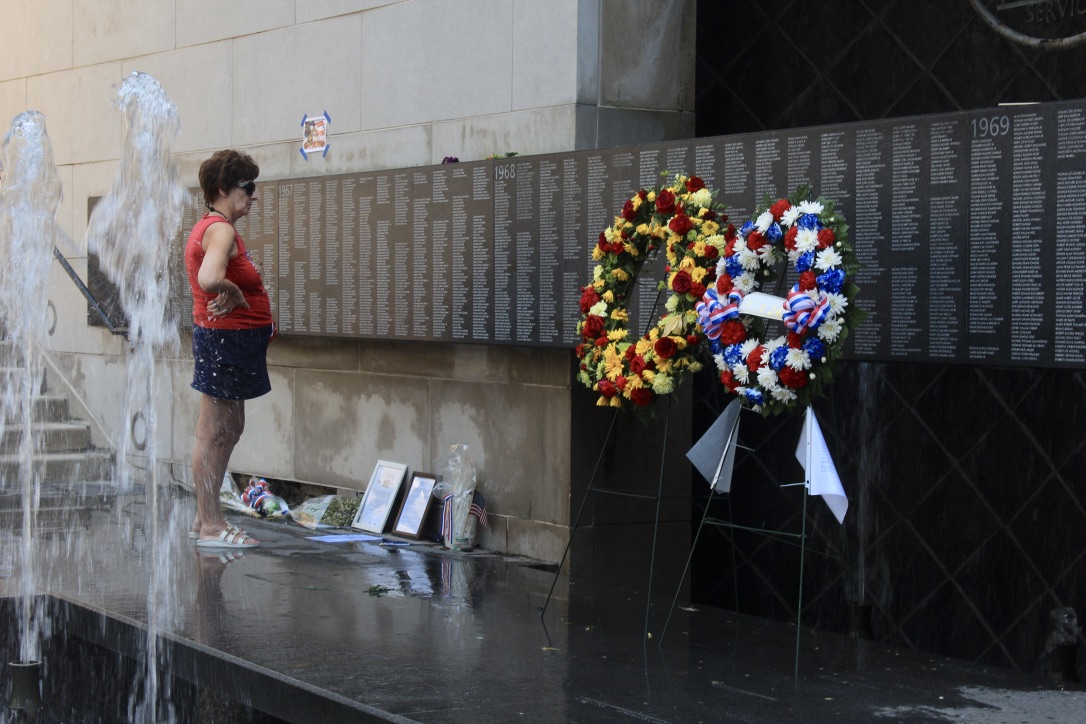 Rivera spent years in the army as a combat engineer before he returned to Illinois and Moraine Community College to get a bachelor’s degree. After transferring to DePaul last fall, Rivera is working on completing a bachelor’s degree in chemistry.

The 20 mile-stretch of the Ruck March honors the 20 veterans that die by suicide each day, according to a 2001-2014 study of veteran deaths by the U.S. Department of Veteran Affairs. An updated version of the report indicates the statistic also includes the deaths of active duty soldiers and National Guard and Reserve former Service members. Ruck March participants are encouraged to carry a backpack or rucksack weighing at least 20 pounds to symbolize the suicide rate and the burdens of veterans. Despite this, the march didn’t feel somber to Rivera.

‘Yeah, it was definitely great,” Rivera said. “There was like a halfway point that was pretty much like a barbecue.”

Memorial Day is bittersweet for Rivera because of the sadness he feels remembering the fallen soldiers that served with him or before him, and remembering the continuing presence of war and bloodshed in U.S. foreign affairs. However, he uses the day to check in with important people in his life and doesn’t mind Chicagoans’ celebrations.

“I feel like people just treat it mostly as a three day holiday and a reason to like go out and grill and barbecue,” Rivera said. “I can’t say I blame them because a lot of them, they probably never had like a relative or anybody serving the military.”

The city scenery looked somewhat different at Graceland Cemetery in Uptown. Enclosed behind Graceland’s grey exterior walls is a self-declared arboretum — a green hilly garden with tall obelisks and concave grave markers. Though Graceland is not a military cemetery and does not have a war memorial section, flags could be seen dotting the green and grey burial sites.

“We don’t put flags out just because we aren’t always given the records of who was a war veteran or not,” said Jensen Allen, associate director of Graceland Cemetery. 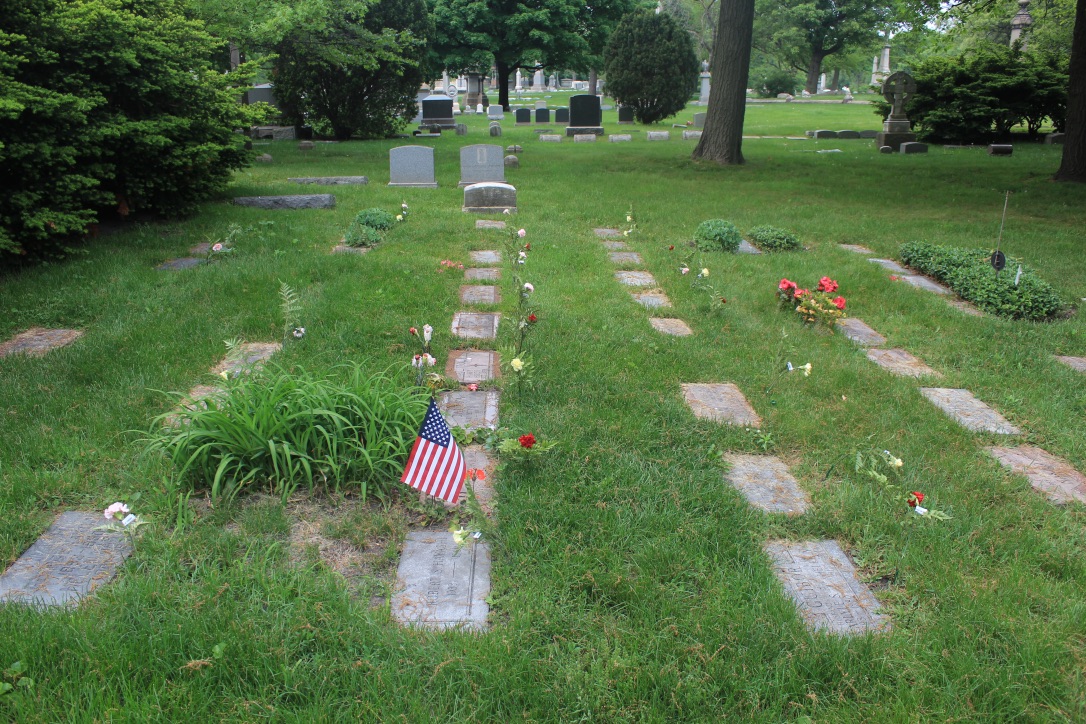 Foot, bike and drive-through traffic to Graceland increases significantly on Memorial Day. The employees of Graceland try to freshly landscape the cemetery and plant summer flowers, but that isn’t always possible with Chicago weather. Allen said the cemetery tries to be fully staffed on Memorial Day morning (the office is only open for half of the day) so that plenty of people are on hand to help with directions, floral wreath displays and heat or rain protection.

“I think it puts things in perspective for people who work in the industry for cemeteries, that even though there are people that are in the ground that are no longer with us, there are still people that cared about them, that have family related to them,” Allen said. “And that’s really the main point of helping them feel better and more at peace with very tough, the toughest thing they’ll ever have to deal with is the death of a loved one.”

In smaller towns without beaches or multiple festivals, the holiday is usually spent with close personal relatives or one community event. In these towns, it’s the people that make the holiday.

In Stoughton, Wisconsin, Carl Sampson read the Gettysburg Address at the town Memorial Day service every year for 72 years in a row until he passed away in 2017.

“He was Stoughton’s historian,” said Lisa Clark, a resident of Stoughton and former friend of Sampson. “He didn’t have to read it, he had it memorized. And, he had impeccable timing.”

Without Sampson, Clark is unsure that the service will be the same, but the memory of him lingers with her on Memorial Day. 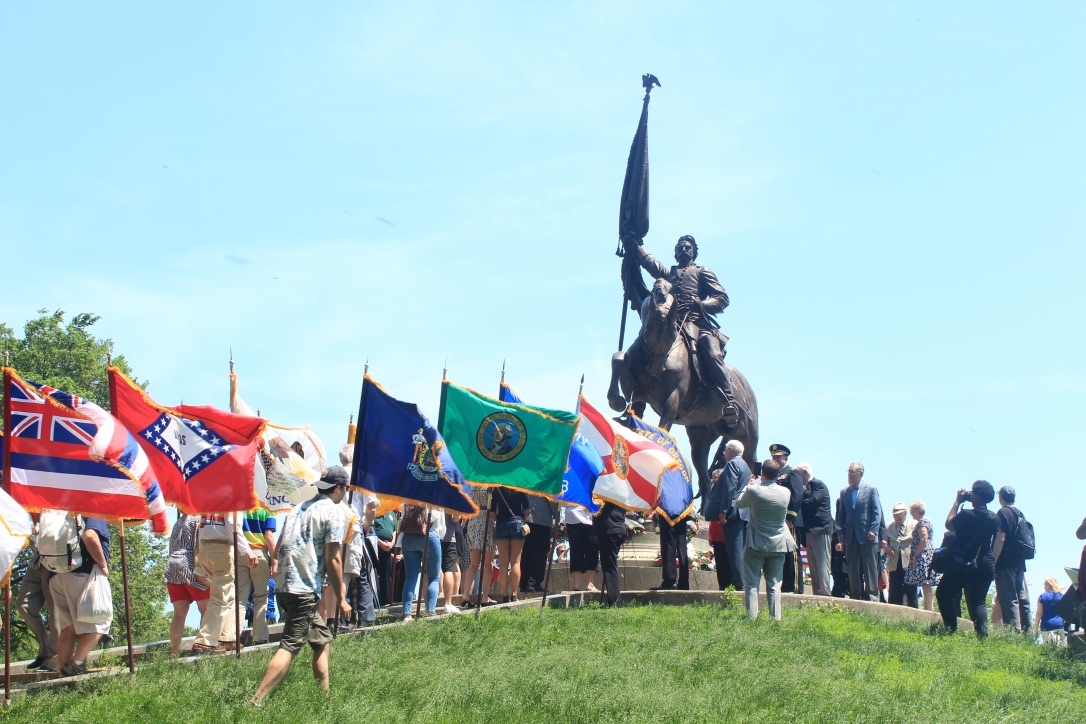 Kris Quade has memories of pies and peonies on Memorial Day. Currently a resident of Laramie, Wyoming, Quade grew up in Warren, Illinois. She remembers that many local veteran families participated in Memorial Day and that her extended family stayed overnight at her house in preparation of visiting the family plots.

“The bigger memory is really about family getting together, because in a town of 1,500, the people buried in your town cemetery are all the people you know,” said Quade.

One of Quade’s visiting aunts was known as the best pie maker in town.

“My one aunt…would make four to six pies on the days of Memorial Day, so no matter what time the relatives came by, they would be offered pie and coffee,” Quade said.

Growing up, Quade remembers her mother making time every Memorial Day to visit the burial of her mother’s sister, who passed away when she was 14.

“My mom got to her grave and would take fresh peonies to put on her grave, and it’s such a memory of mine that I always try to do the same with her grave,” Quade said.

Memorial Day is a holiday open to interpretation. It can be a surface-level bank holiday, a beer-and-barbecue-filled kickoff to summer, or a time for gathering and remembrance. In Chicago, it’s everything at once.