Cyclists Cry for More: How You Can Contribute to S...

Cyclists Cry for More: How You Can Contribute to Safer Roads

Now that (hopefully) the last of winter’s wrath has passed, cyclists who trade their bike in for a bus pass during winter are heading to the shops for fresh air in their tires and a touch of grease on their chain. The summer weather reminds us why biking in Chicago is one of the best feelings: fresh air, exercise, reducing emissions and a sense of freedom that only speeding past historic buildings and skyscrapers can bring. It also reminds us of the problems we put in the back of our mind during winter: hit or miss infrastructure, massive potholes and drivers who still can’t figure out how the Dutch reach works.

Biking has been a vital part of Chicago’s history for decades. In the 1970s, Mayor Richard J. Daley started to plan the city’s first street paths for cyclists. Since then, hundreds of miles of painted lanes, spoke lanes (lanes lined with plastic spokes), and barrier lanes (lanes divided from traffic lanes with wide, concrete barriers) have been added to the city streets, as well as the development of many off-streets trails such as Lakefront Trail and the Bloomingdale Trail, commonly referred to as “The 606.” Many recent developments can be attributed to Mayor Rahm Emanuel, who enacted the “Chicago Streets for Cycling Plan 2020.” In 2012, this 84-page plan assessed the state of Chicago bike infrastructure and proposed to add nearly 650 miles of marked or protected bike lanes. 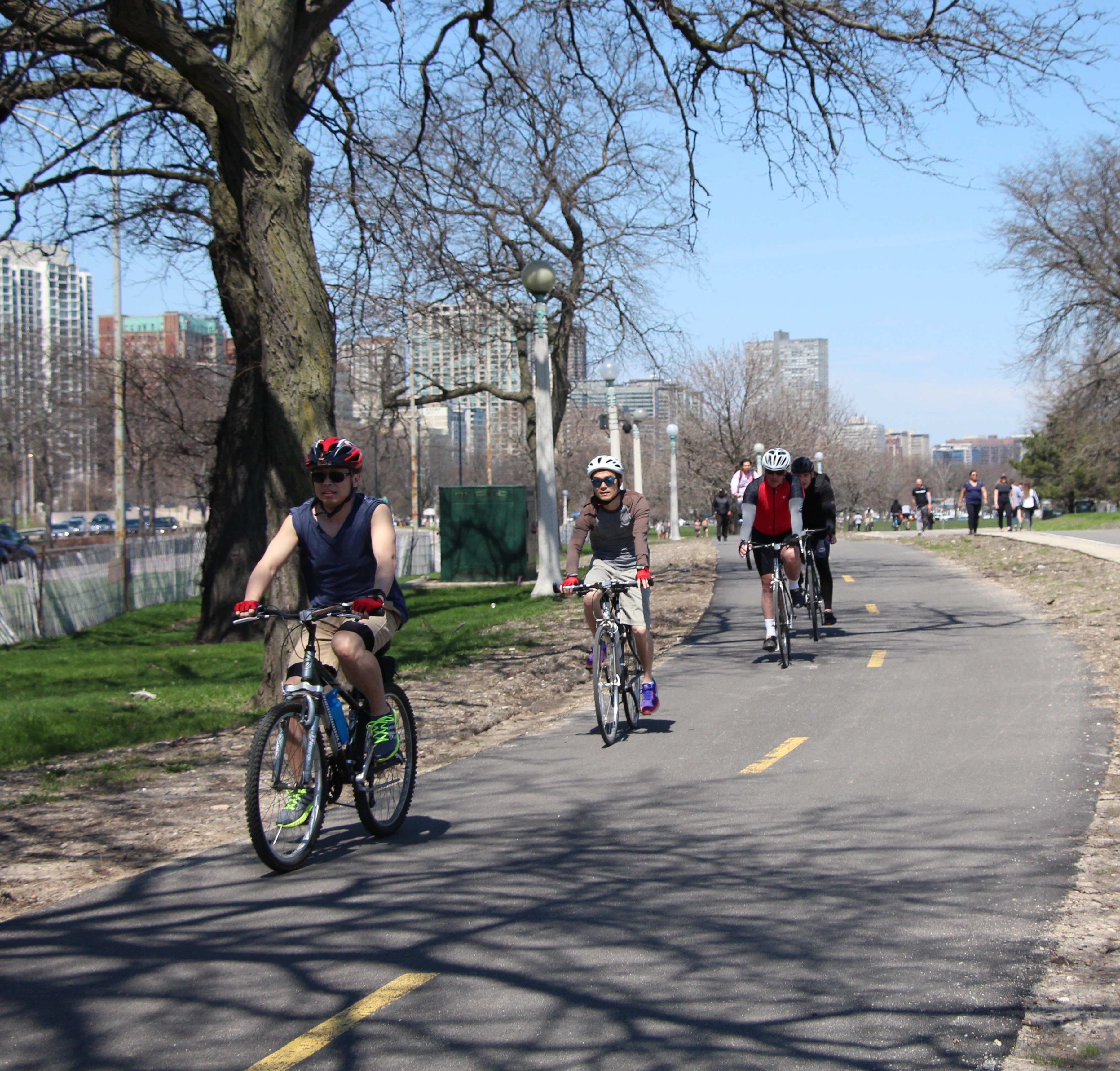 Anyone who has been biking consistently for the past few years can see that our local government has improved biking conditions and opportunities, like increasing clearly marked lanes and adding bike racks, but that doesn’t mean things are perfect.

“I feel like there’s an effort, but I think there’s more that could be done,” said Anthony Johnson, a sophomore at DePaul University who has been biking to class and for fun since 2018.

Even though progress has been made, massive potholes still corrupt bike lanes. In addition, various busy streets, such as Fullerton, Western and Belmont Avenues, still lack painted bike lanes. Other major streets, like Damen, Milwaukee, and Armitage Avenues, are marked inconsistently. 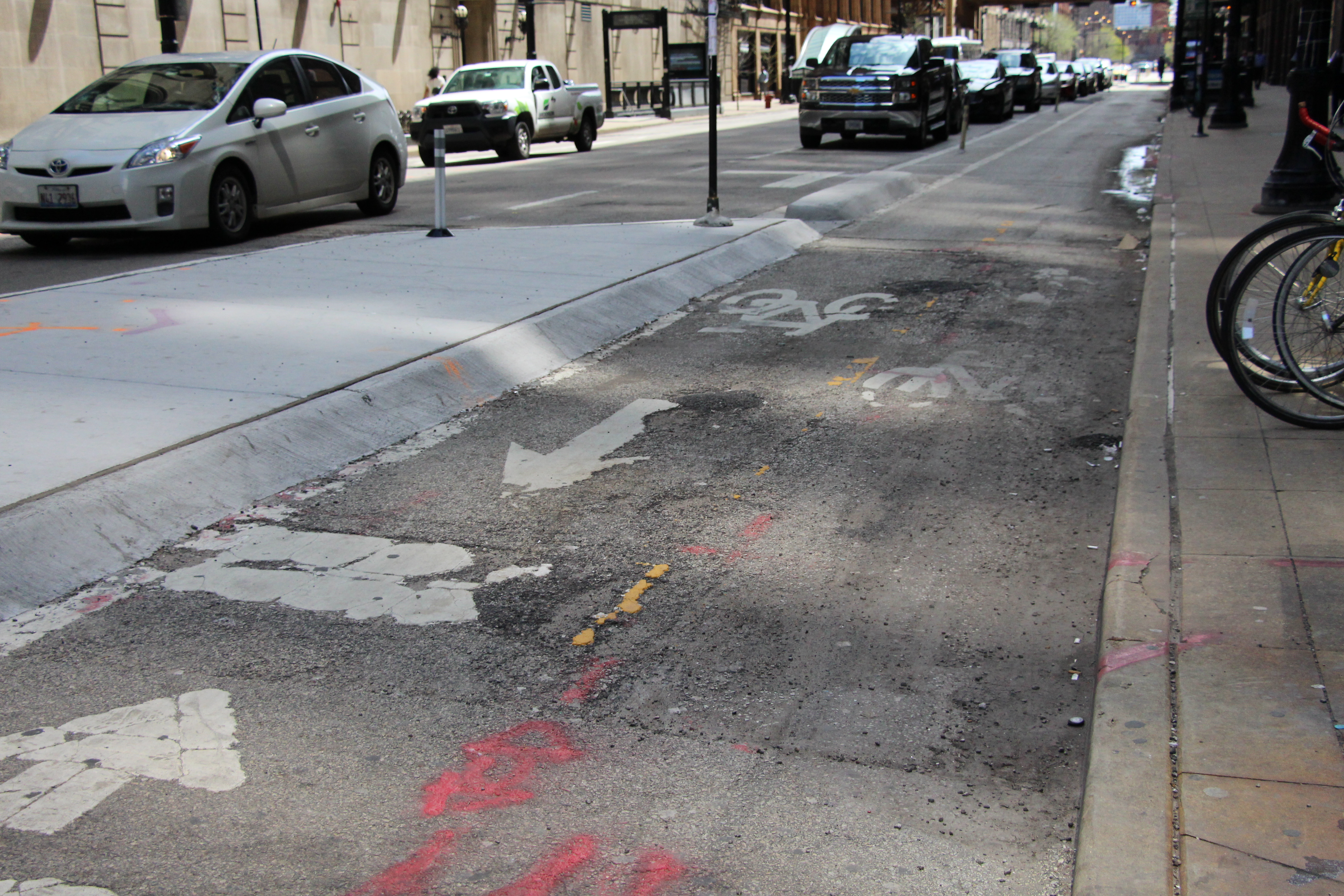 A protected bike lane riddled with potholes and fading paint in the Loop. Evan Dye, 14 East.

Emily Dyer, a Chicago resident who has been biking since 2017, became much more aware of the risks last summer when she was doored on Lincoln Avenue near Lakeview. Dooring occurs when a motorist opens a door as a cyclist passes, often knocking them off their bike and into the traffic lane. Dooring can cause injuries as minor as bruises and scrapes, or as severe as death. Dyer was lucky enough to fall into an empty traffic lane, and walked away only with road rash and a potato-sized bruise on her leg.

Despite her minor injuries, it took some time before Dyer felt comfortable on the road again.

“Honestly I feel like most drivers on the road are not watching for cyclists,” Dyer said. “So to be safe, you have to remind them you exist.”

Dyer feels “much more confident” when her commute includes some sort of bike lane.

“Sometimes biking feels like choosing to be the underdog. If you’ve got a lane all to yourself, that feels like the one thing you have in your favor,” Dyer said.

Zach Elias, a senior at DePaul who has been biking since 2018, echoes Dyer’s concerns. He explained that a fresh coat of paint on bike lanes near his home immediately made him more comfortable on the street. 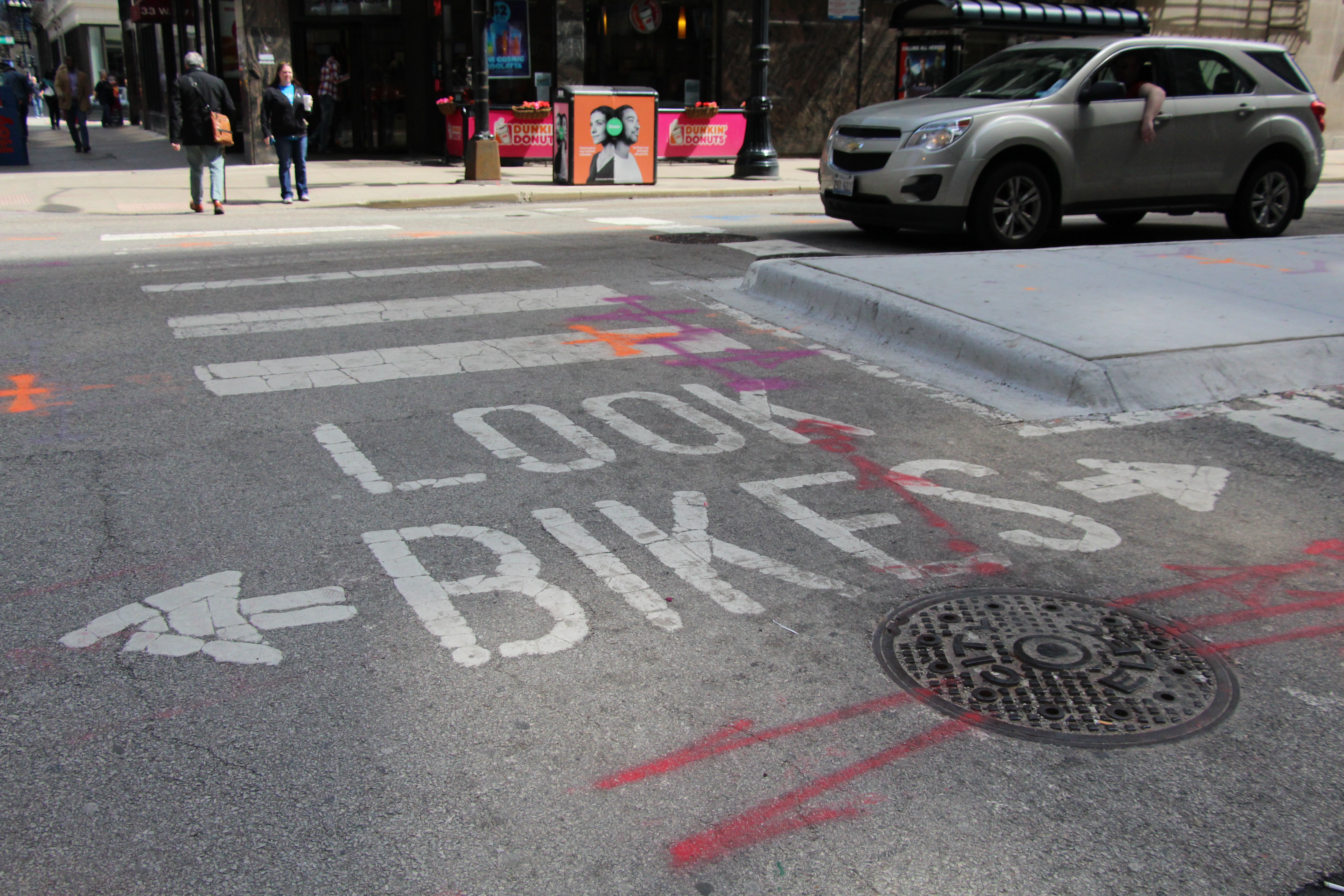 We’ve seen that the city is willing to start initiatives, but will they follow through?

“There are still a lot of gaps in the network,” said C. Scott Smith, Assistant Director of DePaul University’s Chaddick Institute for Metropolitan Development. Smith explained that the city most likely has the means to execute Mayor Emanuel’s 2020 plan. We can see this with previous installations, such as the Dearborn Street barrier lane spanning across the Loop, that “was put in almost overnight,” according to Smith.

As long as cycling infrastructure remains a priority in the eyes of newly elected Mayor Lori Lightfoot, chances are cycling will continue to look better across the city.

“Part of this is getting students, a lot of people, motivated in regards to cycling. The more people that have voices in the political domain…will just show that this should be a priority.” 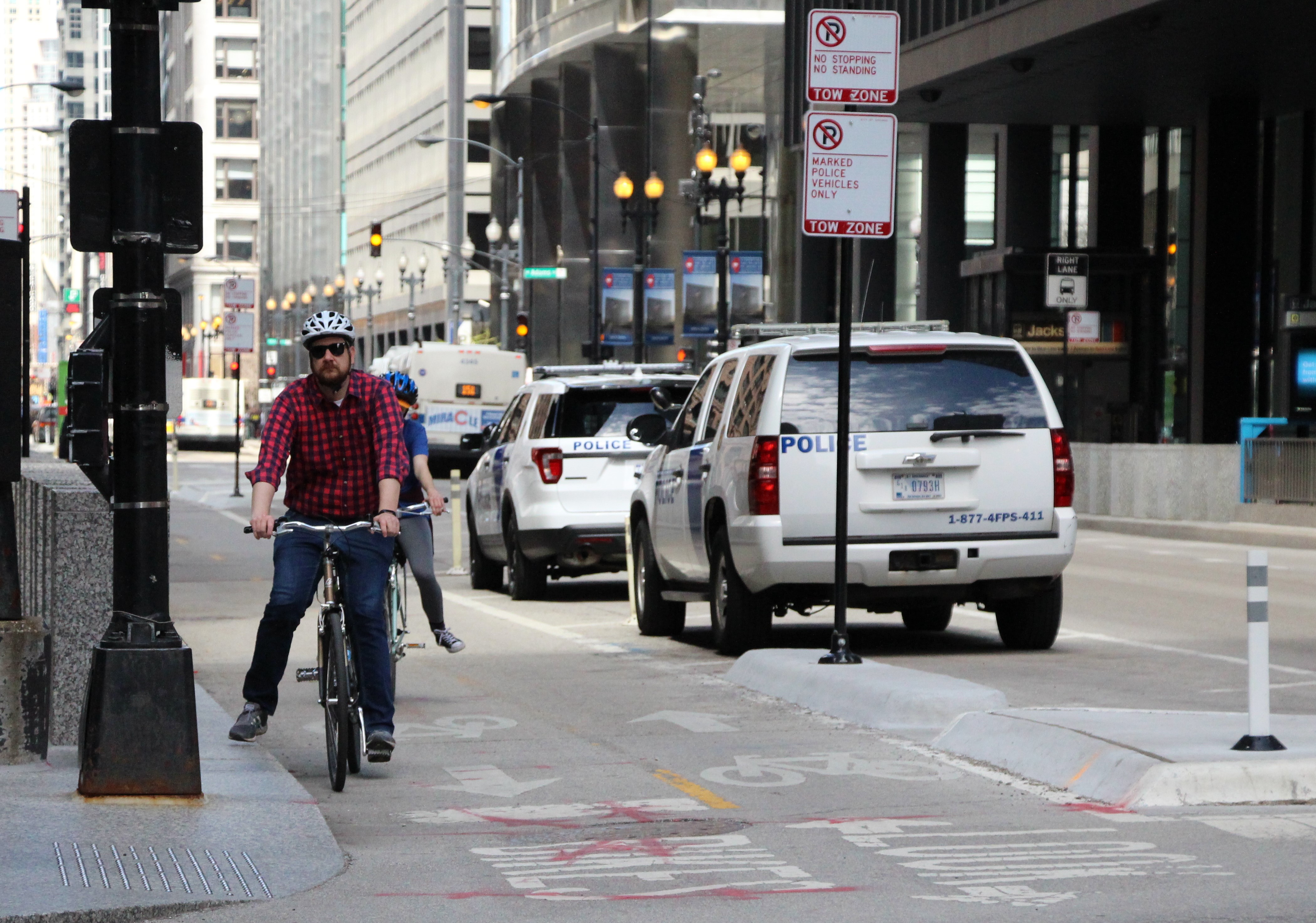 A cyclist brakes at a stoplight at a bike lane in the Loop. Evan Dye, 14 East.

It’s easy to feel like your voice won’t be heard in a city of nearly 3 million people, but there are many opportunities to speak out.

Both the Bicycle and Pedestrian Advisory Committees hold open meetings every few months.

“You’re allowed public comment at some of these,” said Smith. “That’s council people, the Alderman, regional planning committees. You have a direct line of communication.”

The Chaddick Institute also holds pub nights where DePaul students can meet one on one with the Transportation Commissioner.

Chicago was ranked the sixth-best city to bike in, according to bicycling.com. Based on safety, friendliness, energy and culture, it scored nearly perfect on every category apart from safety, which only received 28/40. This is a clear indicator that although Chicago cycling has its perks, there is still room to grow.

Cyclists who are frustrated with the issues they see should take advantage of their opportunities to speak up and help further the positive changes we have seen growing since the ’70s.

Note: The original headline of the article was “Chicago Cyclists Hope to Paint New Lanes.”