Is the Change of Season Changi..

Welcome to Chicago: 11 Names You Should Know

Welcome to Chicago: 11 Names You Should Know 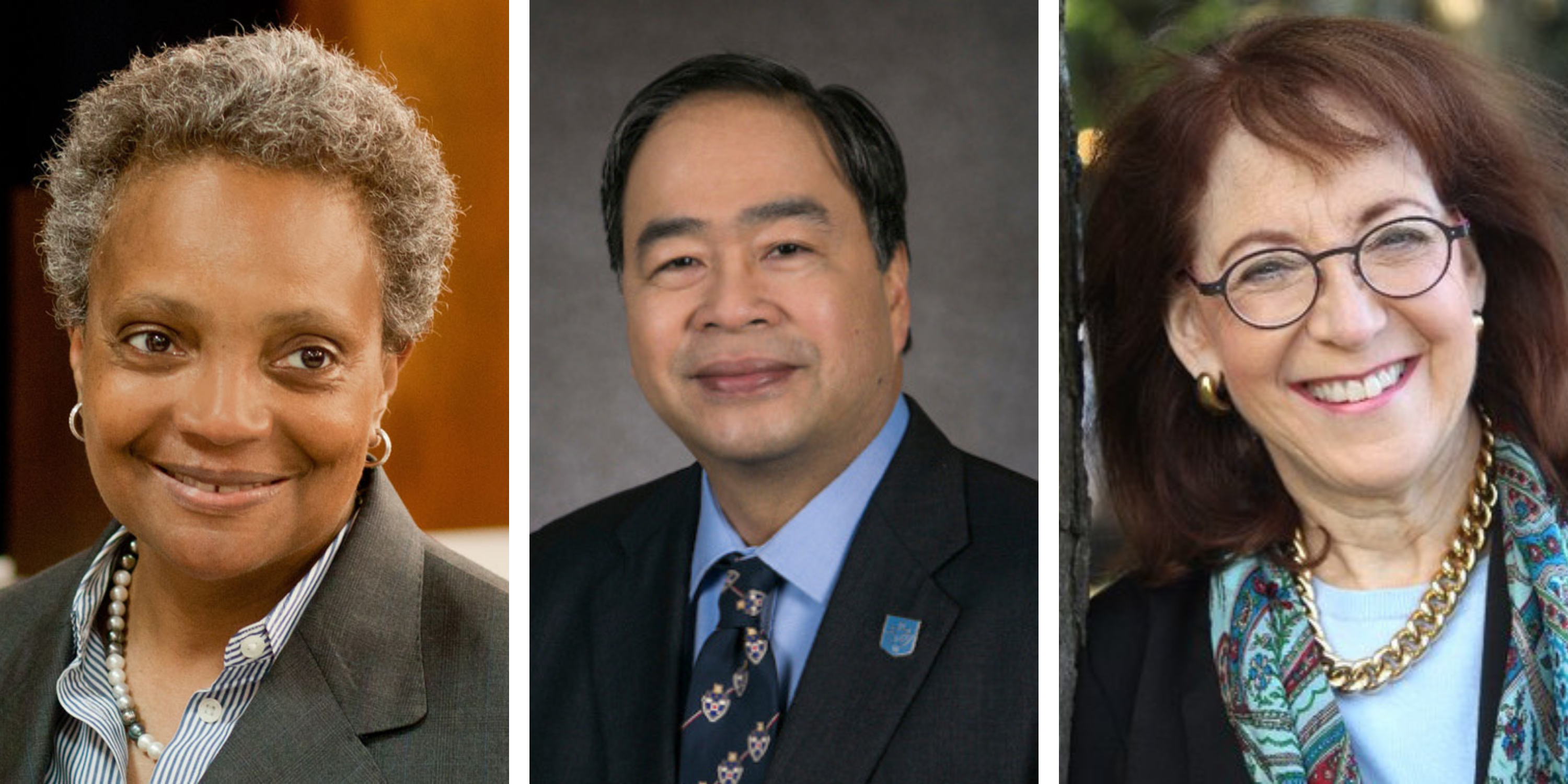 In its 182-year lifespan, Chicago has been home to the critically acclaimed, the wealthy and the infamous. Former President Barack Obama once resided in Chicago’s Hyde Park neighborhood. The notorious gangster Al Capone spent time in some of Chicago’s local bars. And hip-hop artist Kanye West named his daughter Chicago, after the city he calls his hometown.

Nationally recognized public figures connected to the city aside, there are many people in the Chicago today that are influencing its future. As new students settle into their dorm rooms and apartments, these power players are directly, or indirectly, affecting their lives.

Cook County is home to nearly 4,000 elected officials — including 50 aldermen — and there are many other activists, business people and residents creating change and shaping the city. While a comprehensive list of people to know in Chicago would be a cumbersome and time consuming task, 14 East has started with a roundup of 11 people to know.

This list is in no particular order, and is nowhere near exhaustive. So, if we left out someone you think new DePaul students should know, please leave their name in the Google Form at the bottom of the story.

As the 56th (and current) mayor of Chicago, Lightfoot made history when elected this year, becoming the first Black woman and openly gay person to hold that position. In May, Lightfoot was inaugurated into office after winning an extremely crowded mayoral race. Formerly a federal prosecutor, Lightfoot also led Chicago’s Office of Professional Standards under former Mayor Richard M. Daley and the Police Accountability Task Force and the Chicago Police Board under former Mayor Rahm Emanuel.

As the Cook County State’s Attorney, Foxx’s name became nationally recognized during the Jussie Smollett incident for her handling of the case. In January, the Empire actor said he was a victim of a hate crime that occurred near his home in Chicago. However, in February, the State’s Attorney office charged Smollett with 16 counts of disorderly conduct for allegedly planning the incident. Shortly after — with little explanation — the charges were dropped. Concerns of a conflict of interest quickly arose after reports of Foxx’s communication with a relative of Smollett and Michelle Obama’s former chief of staff on behalf of the Smollett family. The Chicago Police Union called for Foxx to resign. Others called for a special prosecutor on the case. In August, a Chicago judge named former U.S. Attorney Dan Webb as the special prosecutor. In a later statement, Foxx said she still didn’t believe there was a conflict of interest, doubled down on the absence of a conflict of interest but vowed to cooperate with Webb.

Foxx is up for reelection in 2020 and has at least 4 challengers.

Illinois House Speaker Michael Madigan gets pulled into most conversations about Illinois politics. Madigan has held his position for all but two years since 1983, making him the longest-serving leader of any state or federal legislative body in the United States. In 2016, Jason Gonzales challenged Madigan for his House seat and lost. However, as Madigan seeks reelection in 2020, his seat is no longer safe as he is now in the midst of a federal civil lawsuit that alleges his team placed two fake candidates on the 2016 ballot to dilute the Latinx vote.

Speaking of lawsuits, Alderman Ed Burke of the 14th Ward has also found himself in the midst of some legal troubles. Burke is the longest serving Alderman in Chicago history, having served since 1969. In June, Burke pleaded not guilty to 14 federal corruption charges, including bribery, attempted extortion and racketeering. Over the past five decades, Burke has held onto his position through several federal investigations — including a 2012 inquiry into the mismanagement of money in the state worker’s compensation program — however, this is the first time Burke has been charged. Meanwhile, on Wednesday, Burke’s wife, Anne, was selected to be the next Chief Judge of the Illinois Supreme Court. Think it can’t get more local?  Burke, Anne and their son Travis are graduates of DePaul University.

Once a revered philanthropist and activist, Finney is under fire for allegations of fraud, self-dealing and mismanagement, involving his nonprofit, the Woodlawn Community Development Corporation (WCDC). The allegations came to light after WCDC filed for bankruptcy, and Finney has since been ousted from the organization. WCDC’s primary source of revenue was a contract with the Chicago Housing Authority (CHA), garnering $170,000 a month in management fees. However, CHA canceled the contract in June, accusing the organization of mismanagement. Lawsuits now jeopardize Finney’s financial situation even more, threatening to take away his church and family home.

Finney declined to comment during an interview or to written questions from the Sun-Times about bankruptcy and the allegations he faces.

Rahm Emanuel served two terms as mayor of Chicago. Prior to this, he served as the White House Chief of Staff during the Obama administration and in the United States House of Representatives. While serving as mayor, Emanuel faced criticism for not only the use of police force in the shooting of Laquan McDonald, but also for withholding the video of the shooting until after he was reelected to his second term. If the video had been released sooner, some wonder if his opponent, Jesus “Chuy” Garcia, would have taken his seat. Emanuel shocked many in politics last fall when he announced he would not run for a third term.

The Ricketts Family owns the Chicago Cubs. The Cubs’ stadium, Wrigley Field, resides in the 44th Ward, which has been governed by Alderman Tom Tunney since 2002. The Ricketts family has vocalized their frustration with the alderman and during this year’s aldermanic election made contributions to his opponents. However, Tunney still won. In the winter, Tom and Joe Ricketts found themselves in a bind when emails published by Splinter News showed the two discussing conspiracy theories about Barack Obama and sharing racist jokes about Muslims. Both later apologized for their “racially insensitive” comments.

You’ve probably heard his name in the news recently, as President Donald Trump considered commuting the former-Illinois-governor-turned-inmate’s sentence. Blagojevich has been in prison for seven years on corruption charges related to an attempt to profit off the appointment of Barack Obama’s Senate seat, trying to extort executives for campaign contributions in exchange for policy changes and making false statements to the FBI. He is currently serving a 14-year sentence.

In November, billionaire JB Pritzker defeated incumbent Bruce Rauner, becoming Illinois’ 43rd governor. Before Pritzker even became governor, he made waves with his record-breaking self-funded campaign — spending $171 million of his own money — and dealt with a handful of controversies on the campaign trail. Over halfway through his first year as governor, Pritzker is pushing a much more progressive agenda than his predecessor.  And he has followed through with one of his biggest — and arguably most difficult to achieve — campaign promises: a move to a graduated income tax. This change would require amending Illinois’ constitution. In order to do so three-fifths of voters must pass it through a referendum. Illinois residents will vote on this change during the general election in November 2020.

President Esteban is the 12th president of DePaul University, and the first non-clergy member to lead the Catholic school. He came to DePaul in July 2018, after spending 6 years as president at Seton Hall University, where he was also the first lay person to lead in the past 25 years. Esteban and his wife, Josephine, moved from New Jersey to live in Lincoln Park.

In a city of nearly 3 million people, there are many residents of note. While this list is far from exhaustive, it’s a start to understanding the power players in Chicago and political dynamic of the city.

If we left out someone you think DePaul students should know, please leave their name below.